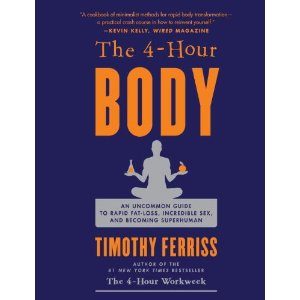 A few months ago I detailed my hatred of the book The Four Hour Body. I disliked his message, his delivery, the way he disregarded EVERYTHING I did to lose weight. By the way, that WORKED for me so I scoffed at everything he said.

Michael is going to start The Diet on May 1st. He asked me to join him in the diet and I was reluctant at first. I don’t want to participate in a super restrictive diet. I lost my weight doing it by counting calories and exercising. It worked. The photos I’ve posted on here are evidence that it worked. So why would I want to suddenly be on a restrictive diet where I can’t eat anything I like?

I don’t know. I told Michael I would give it a try for 7 days. I could try anything for 7 days, I think.

Here are his “Rules”:

“Avoid any carbohydrate that is, or can be, white. The following foods are prohibited, except for within 30 minutes of ﬁnishing a resistance-training workout: all bread, rice (including brown), cereal, potatoes, pasta, tortillas, and fried food with breading.”

Lisa’s Note: I think this is a valid rule. My diet is way too carb-heavy but I don’t think restricting it all is healthy either. Athletes do need carbohydrates for fuel. I work out too much and too hard to not eat carbs. But bread? I can give that up.

RULE 2: EAT THE SAME FEW MEALS OVER AND OVER AGAIN.

“The most successful dieters, regardless of whether their goal is muscle gain or fat-loss, eat the same few meals over and over again. Mix and match from the master list.” (I’ll post the list of “okay” foods later.)

Lisa’s Note: When I was losing 100 pounds I did this. My lunches and dinners were pretty much the same for a year. I mixed and matched a few different things but for the most part it was a very structured meal plan.

“Drink massive quantities of water and as much unsweetened tea, coffee (with no more than two tablespoons of cream; I suggest using cinnamon instead), or other no-calorie/low-calorie beverages as you like. Do not drink milk (including soy milk), normal soft drinks, or fruit juice. Limit diet soft drinks to no more than 16 ounces per day if you can, as the aspartame can stimulate weight gain.”

“Red wine is by no means required for this diet to work, but it’s 100% allowed. Up to two glasses of red per night, no more.”

Lisa’s Note: I have been drinking my calories way too much lately. That I can commit to reigning in.  I will miss drinking milk but I’ll do my best.

“Just say no to fruit and its principal sugar, fructose, which is converted to glycerol phosphate more efficiently than almost all other carbohydrates.”

Lisa’s Note: This is the second thing I have a huge problem with in terms of this diet. I think fruit is a very healthy thing to eat–despite the sugar and carbohydrates in it. My belief: if it grows in nature and it’s not man-made, eat as much as you want. This will be the hardest thing to do for me. I eat an apple or banana every day for a snack and I like that. I will miss it. 🙁 And now that we are getting into fruit season I want to eat tons of blueberries, strawberries and raspberries. That’s my favorite part about summer.

RULE 5: TAKE ONE DAY OFF PER WEEK.

He called this the “Binge Day“–which I’ve previously stated I am completely against. I hate the idea, which I’ve mapped out in detail.

“I make myself a little sick each Saturday and don’t want to look at any junk for the rest of the week. Paradoxically, dramatically spiking caloric intake in this way once per week increases fat-loss by ensuring that your metabolic rate (thyroid function and conversion of T4 to T3, etc.) doesn’t downshift from extended caloric restriction.”

Lisa’s Note: I don’t know that I can commit to bingeing one day a week. I’m just being honest here, it goes against everything I believe. But I suppose for 7 days I can try the restrictive diet, with one day of “splurging” on the weekend.

So Why Am I Doing It?

Good question. I will admit that my food has been a bit out of control lately. It started with going on vacation to Arizona and eating whatever I wanted. I could justify it away because I exercised every day I was in Tucson. But then I came home, saw a gain from eating and taking Prednisone, and wasn’t happy. I need a jump-start to losing again. So I will try this for 7 days.

Michael also agreed to weigh in on May 1st and allow me to post it here along with his progress and weigh-ins. I think if this diet works at all, it will be most evident in Michael NOT me. Despite the stubborn belly-fat I cannot get rid of no matter what I do, I am pretty close to what I should weigh, I think. If I lose a pound or two, that would be awesome, but I’m not expecting much.

Check back on Monday for the first day. Plus I will post what our weekly meals and snacks will be.

QUESTION: Have you done the Four Hour Body Diet? What was your opinion of it and what was the outcome?