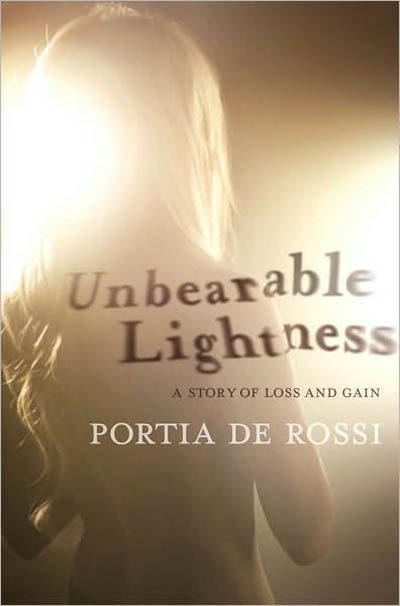 Disclaimer: If you suffer from an eating disorder this post might be a trigger. I include quotes from the book that might be disturbing to some people. I’m in no way qualified to comment on eating disorders or how to get help, so please see a professional who IS qualified! 🙂

In my research for writing my own memoir, I’ve been doing a lot of research on the genre. I’ve been reading non-fiction guides in addition to reading actual memoirs to get a feel for format and style. I heard that this book was really good but my first thought was “A book about a rich movie star complaining about her life? WAH!” I wasn’t really looking forward to reading it and intended on just skimming to study the format.

I read the first chapter and was immediately sucked in. I had no idea what the book was going to be about and I was blown away by the subject matter, her brutal honesty and the crisp, eloquent writing style.

Portia de Rossi started her career in Australia at 12 years old when she started modeling. This was also the beginning of her eating disorder. She taught herself how to binge and purge and spent most of her teen and early adult life as an anorexic/bulimic woman striving to weigh nothing. The self-hatred she describes in the beginning chapters are very familiar to me. I was never anorexic or bulimic but I definitely binged and I had a self-loathing opinion about my obese body. The negative self-talk she demonstrates in the book mirrored my own thoughts. The only difference? I actually WAS fat. Portia weighed about 120 pounds and was hardly fat.

“I need to factor in the calories burned. Yesterday I got out of bed and walked directly to the treadmill and ran at 7.0 for 60 minutes for a total of negative 600 calories. I ate 60 calories of oatmeal with Splenda and butter spray and black coffee with one vanilla flavored tablet. I didn’t eat anything at all at work. And at lunch I walked on the treadmill in my dressing room for the hour. Shit. I had only walked. [pg 4]”

She was working out to the point of having a deficit of calories every day and when it got to be too much, she’d binge. She describes going out to a Mexican restaurant with her brother and eating an appetizer, an entree, part of her brother’s food, a bucket of chips and salsa plus bottomless margaritas. Then on the way home, she stops at a gas station and gets nachos, a Snickers bar, Cheetos and a bunch of other junk food. She binges on it in the car and then purges.

“It’s 4:15am. It’s time for my morning workout. I have exactly one hour to run and do sit-ups and leg lifts before I get in the car to drive forty-five minutes to the set for my 6:00am makeup call…As I slip out of bed and do deep lunges across the floor to the bathroom, I promise myself to cut my calorie intake in half to 150 for the day and take twenty laxatives…But it’s not the weight gain from the six ounces of yogurt that worries me. It’s the loss of self-control. [pg 7]”

It’s disturbing to see the sickness she describes in such honesty. The disorder grew worse when she joined the cast of Ally McBeal. I was a big fan of Ally McBeal and I remember when “Nelle” joined the cast. As a teen I remember being blown away by her ice-queen beauty. She was absolutely gorgeous, with what I thought was the perfect body. Who knew she was living a secret hell in real life.

“I decided that because  I hadn’t eaten for many hours and my calorie count was fairly low that day, I would allow myself to have a piece of Extra chewing gum. I always allowed myself to have the gum, but at 5 calories a stick, I had to add it to my daily calorie allowance because it was these kinds of unrecorded calories that could build up and cause you to gain weight. [pg 175]”

She then goes on to describe stuffing the gum two sticks at a time into her mouth, chewing neurotically and then spitting them out and stuffing more into her mouth. She panics and realizes she just consumed “60 calories.” She says: “If I waited too long to finish burning off the calories consumed by chewing the gum, the calories might turn into fat. [pg 178]”

“At 82 pounds, the veins on my arms looked like thick strands of rope attaching my hands to my forearms and my elbows. The unsightliness of it forced me to put ice on my wrists to try and make them disappear. [pg 244]”

That quote made me think of Madonna and I wonder if she has an eating disorder? Portia eventually got down to 82 pounds and collapsed on the set of a movie. “I am tumbling now. I have fallen off my axis. I’m spinning into the blackness. The spinning suddenly stops. I have escaped. [pg 259]” The part in the book where she finally collapses brought tears to my eyes.

Heartbreaking. She weighed less than 100 pounds. She hadn’t had her period in over a year. She developed osteoporosis.

She doesn’t really mention her relationship with Ellen until the Epilogue of the book. She does discuss being gay throughout the book but in hiding. She was terrified of people finding out–of paparazzi discovering her secret, of Hollywood ostracizing her. It was really devastating to read how much of her life was a SECRET. Homosexuality was a shameful secret. Anorexia was a shameful secret. Eating was a shameful secret. Just brutal to read, but I think gay or straight anyone can relate to her book.

Wow, I hadn’t intended on writing a huge long post about this book but it seriously touched me in a way I wasn’t expecting. I could relate to the negative things she told herself about her body. I could relate to the slippery slope of too much exercise. I went through something similar when I was getting obsessed with the scale (which is why I made a rule to only weigh myself once a month). I’m glad that I was able to step back and see that I was nearing a dangerous zone with my thinking and correct the behavior. It’s not always easy, like Portia describes.

The book is wonderful. I read it in one day. It’s an easy read, yet a hard subject to read about. I really cannot recommend this book enough.

“If you can accept your natural body weight–the weight that is easy for you to maintain, or your “set point”–and not force it to beneath your body’s natural, healthy weight, then you can live your life free of dieting, of restriction, of feeling guilty every time you eat a slice of your kid’s birthday cake. The key is to accept your body just as it is. [pg 302]”

QUESTION: Are you going to read this book? Could you relate to any of the quotes?

How to Lose Weight – Week Three