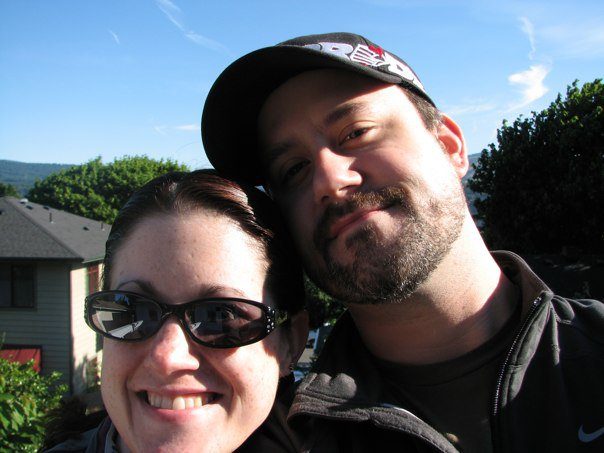 Michael and I are celebrating our three year anniversary. The “official” date is a little fuzzy. We were friends for months before we started dating and really we just decided on June 19th being our anniversary. It was close enough. June 19th three years ago was the night before I had surgery to remove the lump from my breast. Michael took me out to dinner to a fancy restaurant (Eleni’s Greek Restaurant in Sellwood). I got dressed up and we had our first REAL date. I was scared that the surgery would be painful, I was scared the lump would turn out to be cancer (it wasn’t), I was scared I’d have a big scar, I was scared I might not wake up. Michael was the sweetest, kindest guy and he tried to distract me from my fears and reassure me that everything was okay.

For our first anniversary we spent the weekend in Stevenson, Washington. I booked us a romantic little cabin right on the Columbia River, walking distance from the Walking Man Brewery. It was a log cabin with a rustic interior and jacuzzi tub. The cabin was perfect–except for one thing. We quickly found out WHY the cabin was less than $80 a night. It was right next to the train tracks. And yes, there was a train that went by almost hourly. We should have known that when we saw the “complimentary” ear plugs by the bedside.

Either way, it was still a nice weekend. We ate breakfast on the deck next to the blooming jasmine flowers and we drove to the Maryhill Winery.

We hiked on the Columbia River and then hiked Eagle Creek and saw a deer. It was a good first anniversary.

The second anniversary was a bit better. I booked us a room at a very cute bed and breakfast in Hood River. The breakfast was delicious, our room had an amazing jacuzzi tub in it.

We did several hikes in Hood River and also near Multnomah Falls.

We did a bike ride through Hood River and got to see gorgeous views of the Gorge from the trail.

Last year’s anniversary weekend was one of my favorite vacations that we’ve taken together. The weather was absolutely perfect and we did so many fun things! I couldn’t have asked for a better weekend.

So what are we doing this year for our 3rd anniversary? I have NO idea! Michael is planning it this year and it’s a surprise. I have no idea where we are going or what to pack. I love surprises! No matter what it is, it will be fun!

You Are Stronger Than You Think

Bike Ride Up a Mountain