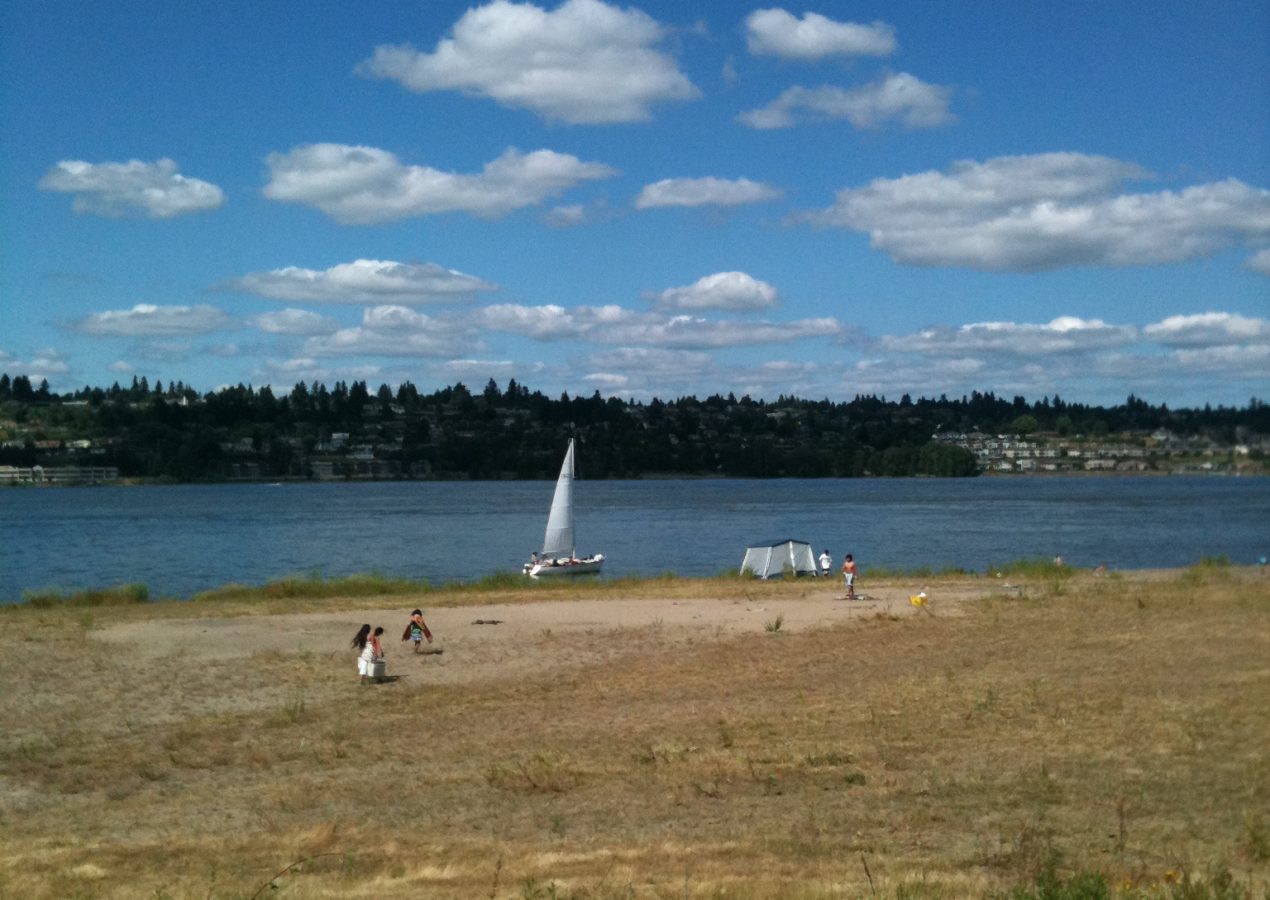 Sunday morning I skipped the pool and watched some of the Tour de France. I’m glad that the cheater Contador isn’t doing well!

I like watching the Tour de France. It’s pretty inspiring and VERY humbling. I’m humbled by their speeds and skills. I could never do that. I struggled in June to bike 85 miles. Did you read that Lori biked over 350 miles in June? I’m so impressed!

My hope is that July is a big biking month. I need the practice before the Portland Century! After lunch on Sunday we set out for the day. It was warming up but still a tad overcast. We biked from our house through neighborhoods and got to the Springwater Trail. Michael had mapped out a 40 mile loop on Google Maps. We headed West toward downtown.

I was feeling good. A little sore from Saturday’s workout but more sore from the gardening I did! My back felt really tender. I lead us passed Oak’s Park to the Esplanade and Michael drafted me. I stopped to see the Waterfront Blues Festival on the other side of the river. It was a sea of people!

We biked up the ramp next to the Steel Bridge and rode by the Rose Garden.

There was a goofy bike crossing–the first I’ve seen like this–where the cyclists have their own light and bike diagonally through the intersection. It was cool.

We biked by the max and passed the Rose Quarter to get to North Williams Street. The bike lane was wide and safe.

We biked up Williams and then stopped on Killingsworth to get some snacks: I got an iced tea and sucked it down in 2 seconds, Michael got a soda. I also had a GU.

We needed to get back to Williams and the bike lane ended. It was super sketchy and terrifying. We were clearly in a part of town that was NOT biker friendly. A car came inches from hitting Michael! 🙁

We got off this street and took some back streets until we could loop around to Marine Drive.

Marine Drive was much safer. Until we stopped to have another GU and water. I also wanted to stretch my back. I unclipped my right foot and then lost my balance. I was still clipped in on the left and struggled to get out and I FELL.

I hit the pavement — OF COURSE I had an audience too– and when I got up I was shaking from adrenaline. Scraped my knee, scraped my elbow, bruised my butt cheek, got road rash on my leg and scratched my bike. UGH!!!!

Not fun. I stretched and then we biked East on Marine Drive. The day had warmed up significantly and I was glad I wasn’t wearing long sleeves. We stopped a lot for water and stretches.

Marine Drive was nice and the mountain looked gorgeous. We biked to the I-205 bike path and headed South. There were a few huge hills we had to tackle on the way home. I was losing steam, growing tired. My butt hurt from the crash. My legs were NOT good on the hills either. I really struggled for some reason, while Michael zipped up them like they were nothin’.

The rest of the ride home was uneventful. About 5 miles from home I mentioned to Michael that we should get burgers for dinner. I didn’t have to twist his arm. He burned 2500+ calories or so?

We split a protein shake post-ride, cleaned up and went out for burgers.

QUESTION: What was the most active thing you did this weekend?