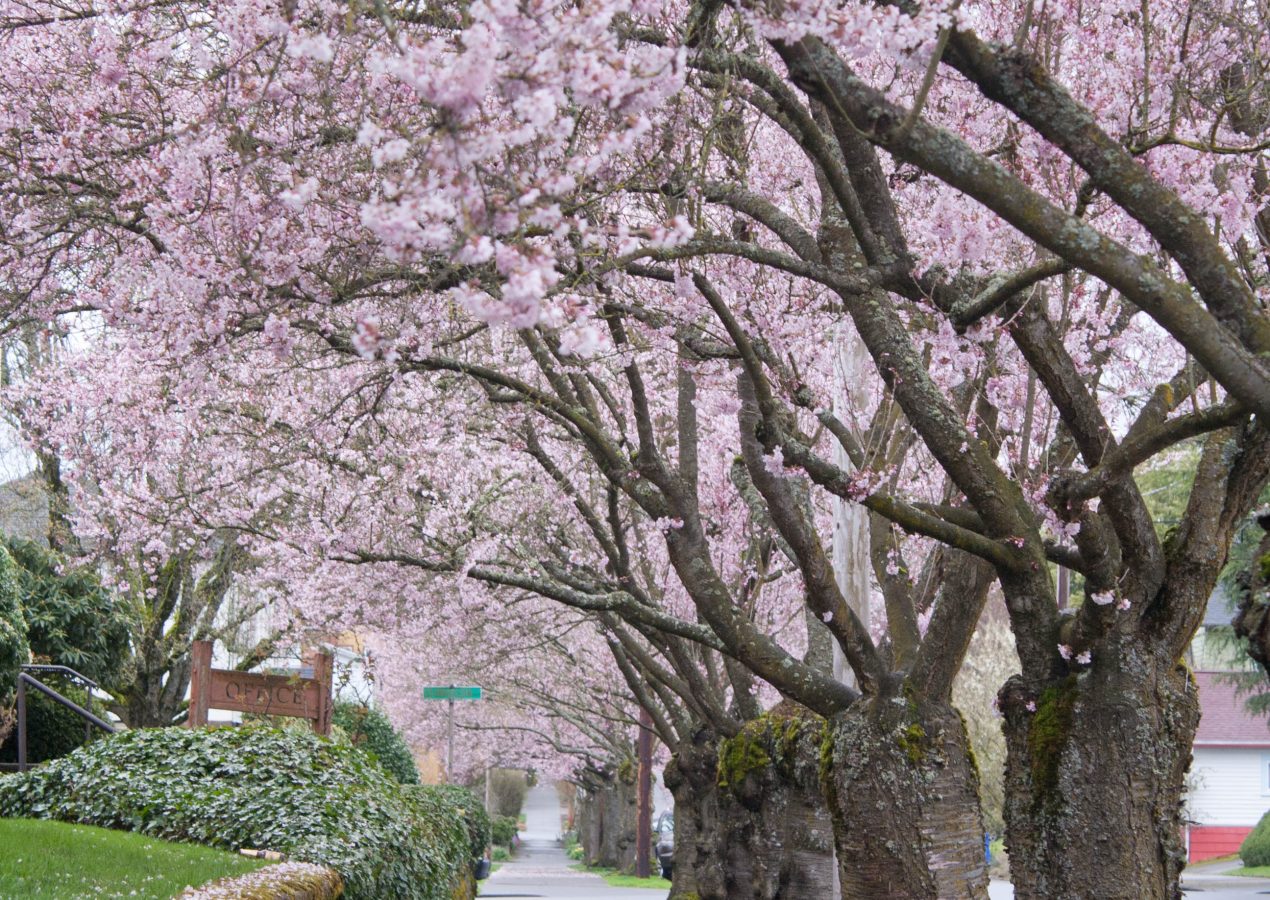 Pho never appealed to me because I had the misconception that it was just raw meat in a bowl. I listened to the nay-sayers who told me I would be eating tripe and other weird things. While I am a pretty adventurous eater and I enjoy trying new things, intestines are not on my list of things to try.

That being said, a few good friends whom I trust have raved about Pho for so long I decided I wanted to try it. My friend Sam offered to take me to a place she really likes for my first experience. I took her up on it because it had been awhile since we’d hung out.

It was a gray, dreary spring evening but with Daylight Savings it was still light enough out for us to walk to the restaurant from her house. We zipped up our coats and strolled through the blooming cherry blossom trees in the neighborhood.

The ground was still wet from an earlier rain shower but it was a nice evening for a walk. We went to Pho DaLat off SE Hawthorne (for you Portlanders it’s right across from the Fred Meyer). I remember that location changing cuisine a lot. Inside it looks like it used to be a breakfast place a la Denney’s or the Waffle House at some point in time.

We were seated immediately (the place is huge) and we got tea right away. I think it was Jasmine tea–sweet and lovely. And it was hot, which was nice after our chilly 8 block walk to the restaurant.

Sam helped me figure out what to order. She was getting the Pho with beef balls, tendons and tripe. I was positive I did not want that! Instead, I ordered the noodle soup with flank steak. I was hungry and tempted to order a large bowl of the soup but Sam talked me out of it. She assured me the small was massive, and she was 100% correct.

They also brought a plate of the “mix-ins.” It was sprouts, jalapeno slices, lime slices, various kinds of basil and cilantro and greens. The plate was heaping. Sam instructed me to plop some of the jalapenos into the soup to get the flavor out and to squeeze lime juice into the broth and mix it around with my chopsticks.

The meat was on the bottom of the bowl with the noodles so I mixed it all up. Then I tore the greens and herbs up and mixed that in, followed by the sprouts which gave the soup some crunch.

It was insanely messy to eat so I do not recommend this type of cuisine for a first date. 🙂 I really enjoyed the Pho! It was savory and hearty. The broth was delicious and was the perfect thing to eat on a cold, rainy day. I added Sriracha sauce to the soup to give it some heat. I gobbled it all up it was so good.

How many calories are in Pho? I have no idea. I Googled it and got a million different answers. Best guess-somewhere between 400-800. Um, that’s pretty vague!

I was so glad I finally got to try Pho. I liked it a lot and my new mission is to try other restaurants around Portland that serve it. Michael really wants to try it too, so I might take him one day soon. I am ALWAYS up for soup. It’s one of my favorite things. After the Pho we opened our fortune cookies.

Vague, but telling at the same time. I’ve been looking for a solution to a problem in my life lately. Maybe I’m just looking in the wrong place….After we wrapped up our gab-fest and finished eating, we walked back to her place. It was dark by then but at least it wasn’t raining. It was a lovely evening that exposed me to some new cuisine. Win-win!

QUESTION: Give me your thoughts on Pho. Love it? Hate it? Never going to try it?

Gettin’ In The Mood

I Had a Drinking Problem

Taking the Training Wheels Off