Saturday was supposed to be “long bike ride day” for Michael and me. Unfortunately, Michael was feeling under the weather so he stayed home. I didn’t really feel comfortable doing the 40 mile loop by myself. It’s not that I couldn’t physically do it myself, but the loop goes through a few parts of town that are a bit sketchy and I’d hate to have something go wrong with my bike out there with no one with me. I decided I would still go for a ride, I just wouldn’t do the loop.

Michael and I had breakfast together at a cafe in Sellwood (bagels with cream cheese and lox) and then I saddled up. I started out doing my commute until I got to the Springwater trail and then I headed east. It was similar to the route that we took Labor Day weekend. This time, I didn’t stop for a burger. 🙂 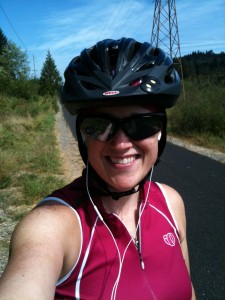 It was a nice hot day and my body felt so good! I didn’t have the saddle soreness I had the previous ride and didn’t have any lower back discomfort (that had also returned after my weeklong break). For the middle part of my ride on the trail, I apparently was playing Leap Frog with another pair of cyclists. I was much faster than them and I’d pass them, then they would catch up to me when I was stopped at a light and pass me. A few times the woman actually said, “I’m going to go around you”…why? They were pretty slow, so slow that when I was stuck behind them I didn’t have to peddle. So then I would pass them and zip on ahead, leaving them in the dust. I have no idea why they were insisting on playing that game but I was glad when they turned off the trail and I didn’t have to play anymore. 😛

I rode east as far as I wanted to go and then stopped for a snack. 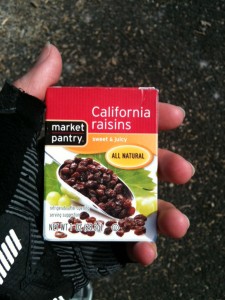 I ate the little 90 calorie pack of raisins, drank a bunch of water and then decided to turn around. I’d been biking for about an hour and while I could have physically gone longer, my phone battery was quickly diminishing and I didn’t want to get stuck out there with a dead phone. Just in case. Remember to be safe. I was safe and even carried my pepper spray since I was out alone on the trail. 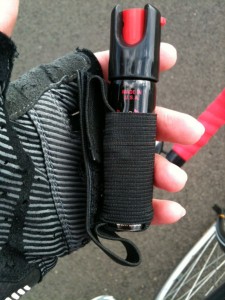 I turned around and took the I-205 bike path home and made pretty good time the way back despite being in a head-wind every direction I went that day. Here’s how I did: 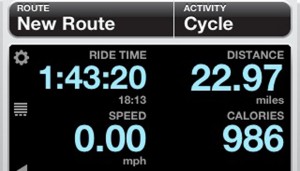 That put me in at just under 65 miles for the first week back after vacation. I was really satisfied with that and glad I went out even though I was doing it solo. After I cleaned up a bit, Michael and I got sucked into watching the rest of Season 1 of Game of Thrones (I’m on book 4 now) and then went out to dinner at East Burn. He had a Groupon so dinner was cheap! 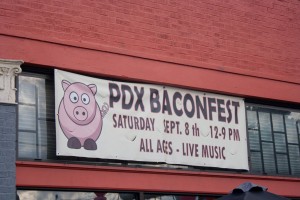 Apparently it was Baconfest that day–how did we miss that?! 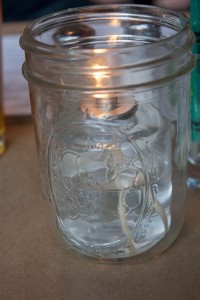 We sat in the cool little “floating” seats in the front of East Burn (it’s kind of like sitting on a porch swing while eating dinner) and ordered beers: the Mojo IPA (the Nitro beer I liked so much last time I was there). Mmm frothy and strong. 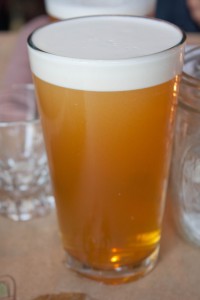 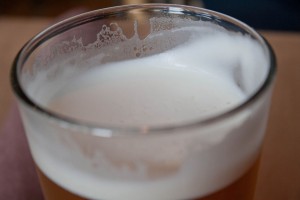 Since neither of us had really had lunch (and I had biked off 900 calories that day and was ready to eat my arm) we ordered an appetizer. The calamari wasn’t my favorite. It had a spicy mustard aioli sauce on it, which was the only saving grace to it. I don’t know why I didn’t like it very much but it just didn’t have a lot of flavor and I didn’t like the breading they used. Maybe it was cornmeal? It just reaffirmed that Jake’s is the best calamari in Portland. 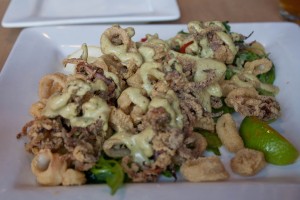 Michael ordered the Lobster Mac n’ Cheese. I had one bite and it was tasty–not too much cream but still rich tasting.

I ended up getting the BBQ Chicken with a green salad and blue cheese dressing and their potato salad. I loved my dinner! The blue cheese was just flavorful enough without being overpowering like blue cheese often can be. The salad was delicious and the potato salad was one of the best I’ve had. Potato salad isn’t something I usually like but they did this right. 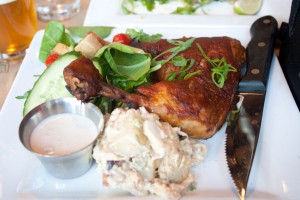 I wasn’t a huge fan of the BBQ sauce, it didn’t taste like a whole lot. But maybe I’m just spoiled with Michael’s AWESOME BBQ sauce. I will say this about the chicken: it was cooked perfectly and I did not need a knife to eat it. The meat fell off the bone.

With our bellies full and happy, we headed home for more Game of Thrones and thankfully an early night to bed.

QUESTION: What kind of mac n’ cheese do you prefer?