A Peach of a Century, Finale

If you missed part 1, you can read it here. 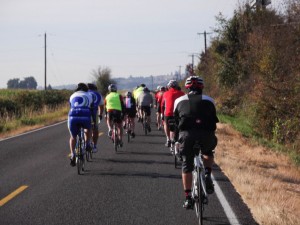 After the first rest stop, the route wound through the town of Scio, over some bridges, across the Santiam River and into farm land. It was miles and miles of corn fields and recently tilled land. There were very few trees in this part of the route and because it was down in the valley there was just WIND. Wind, head wind, side wind, unfortunately no wind at our back making it any easier to ride! 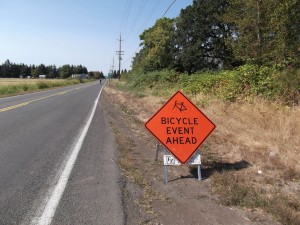 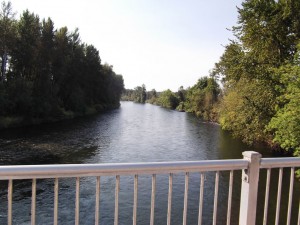 This was the most difficult part of the metric century for me. I was feeling slow, lethargic, my lower back was starting to ache, I was getting a bit saddle sore, my neck felt fatigued. It was just hard. We were working so much harder than we had to because of that damn wind. I stopped a lot during the next 15 miles. I just had to. If I didn’t, I think I would have felt the mental fizzle and lost all of that excitement and fire that was motivating me to the finish line. 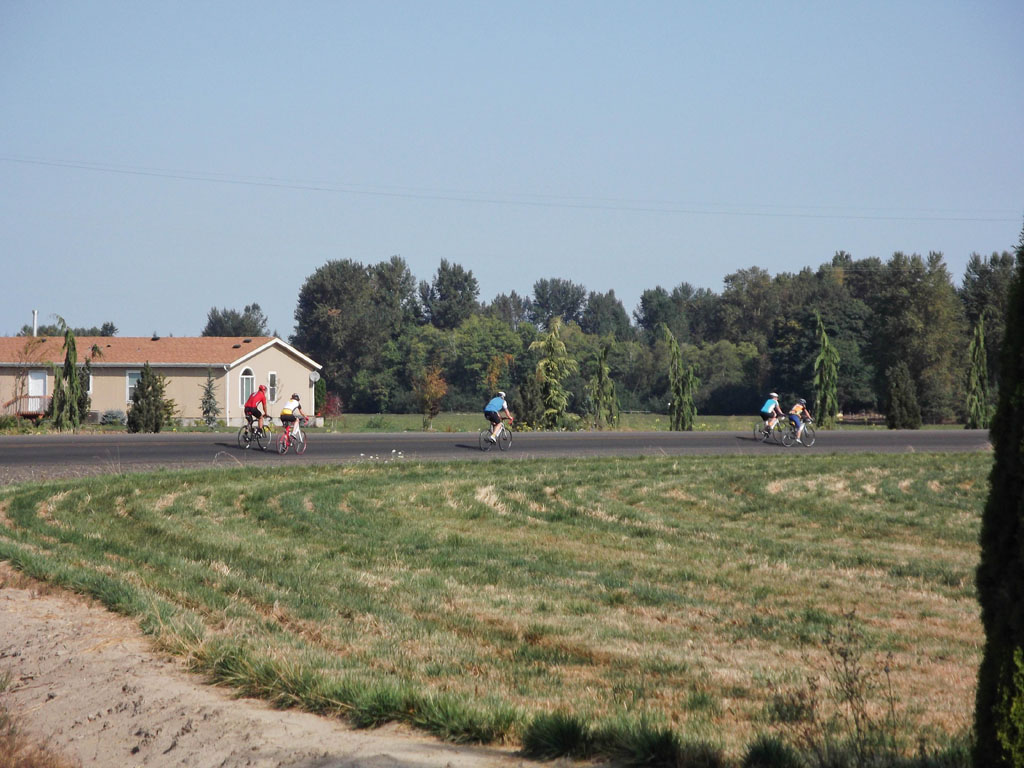 We were riding in the middle of nowhere, ironically not too far my aunt’s farm. I recognized a lot of the landmarks and road signs because of summers spent down on her farm when I was a kid. We rode over a covered bridge, which was really pretty. 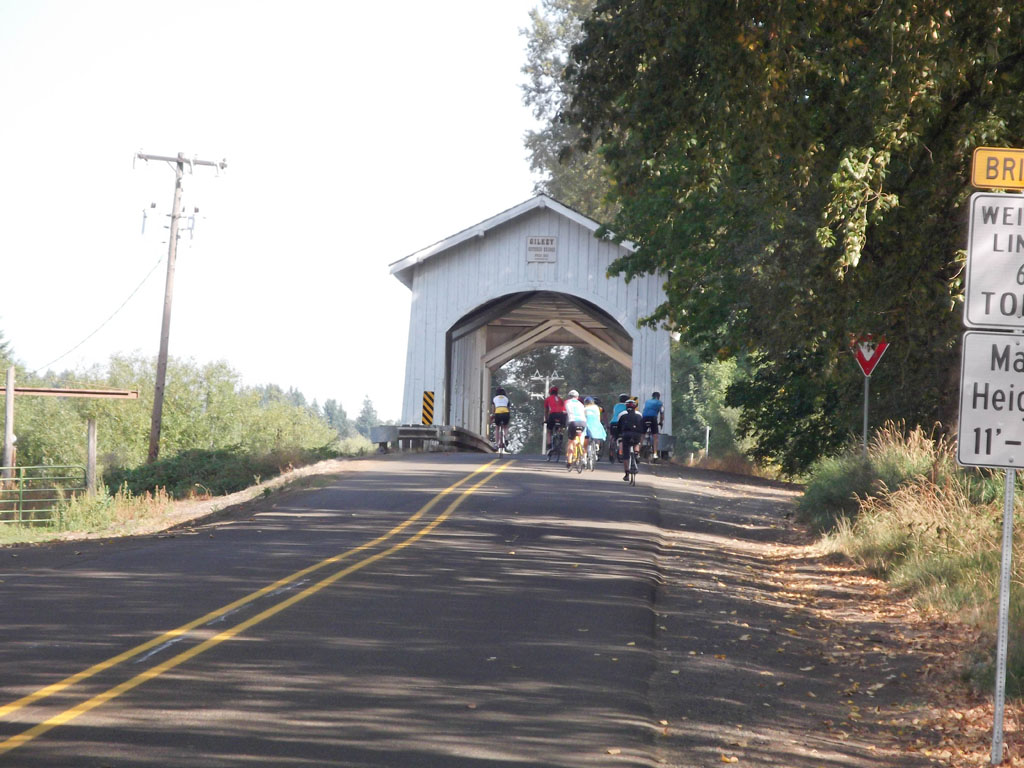 Mentally I used the tactic of denial to get through this stretch. I refused to let myself dwell on the discomfort or pains I was feeling. None of it was so bad that I was miserable but it was definitely difficult and uncomfortable. Michael and I stopped under a tree in the shade to reload on water and apricots and just rest for a few minutes. I asked him how close we were to the last rest stop. “Have we at least gone 30 miles so far?” Yes we had. But not by much more. Okay. I can do this. 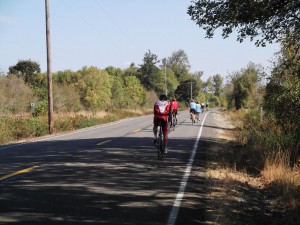 The last ten miles or so to the rest stop were hard but I made it. I was ready to eat lunch, too. The last rest stop was at the Pioneer Park in Stayton, at mile 43.5. That meant we had about 20 miles to go to the finish. 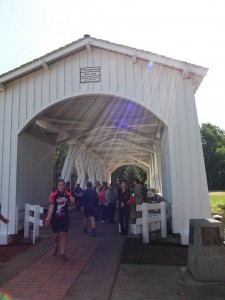 The food was set up in another covered bridge in the park, right next to the creek. They had the same food that was at the first rest stop, but also the sandwiches for lunch, too. You had to pre-order them and I’m glad we did. I needed something more substantial than trail mix, bagels and cream cheese. 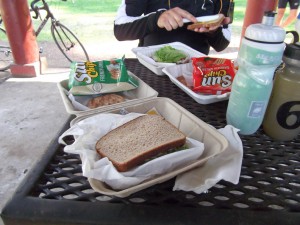 I ate most of my ham sandwich, which wasn’t exceptional in any way but who cares at that point? I’d burned around 1900 calories by mile 43 and was ready to EAT. It came with Sun Chips and I ate 3/4 of the bag, and a Snickerdoodle cookie which I devoured all of. We let lunch sit a little bit (but not long enough for my liking) and then got back on the bikes. The thirty minute lunch break was a good rest. I felt like I got a second wind after lunch and the last 20 miles were MUCH easier for me. 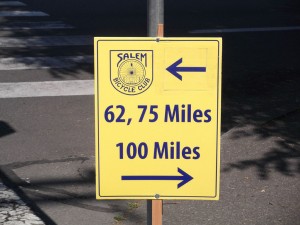 DON’T GET CONFUSED! Make sure you take the right route! That could be awful! Like I said, I was feeling much better after lunch (despite a too-full tummy) and made better time. My body felt better, too. 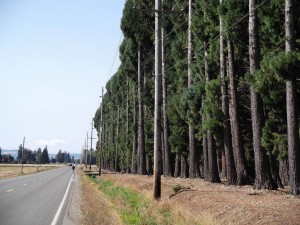 There was still a heavy wind but it wasn’t as miserable as the other part before lunch. The back roads were pretty quiet and it was such a scenic route that I just enjoyed myself. I thought about how happy I was that Michael and I were able to do the event, and how happy I was that my body was relatively good. 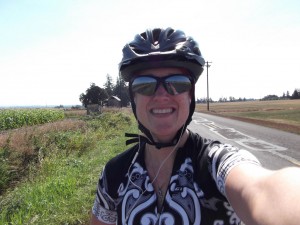 See! I’m smiling! More cornfields. More farms. GENTLE rolling hills…at least for awhile. Then we saw came around a bend and saw this: 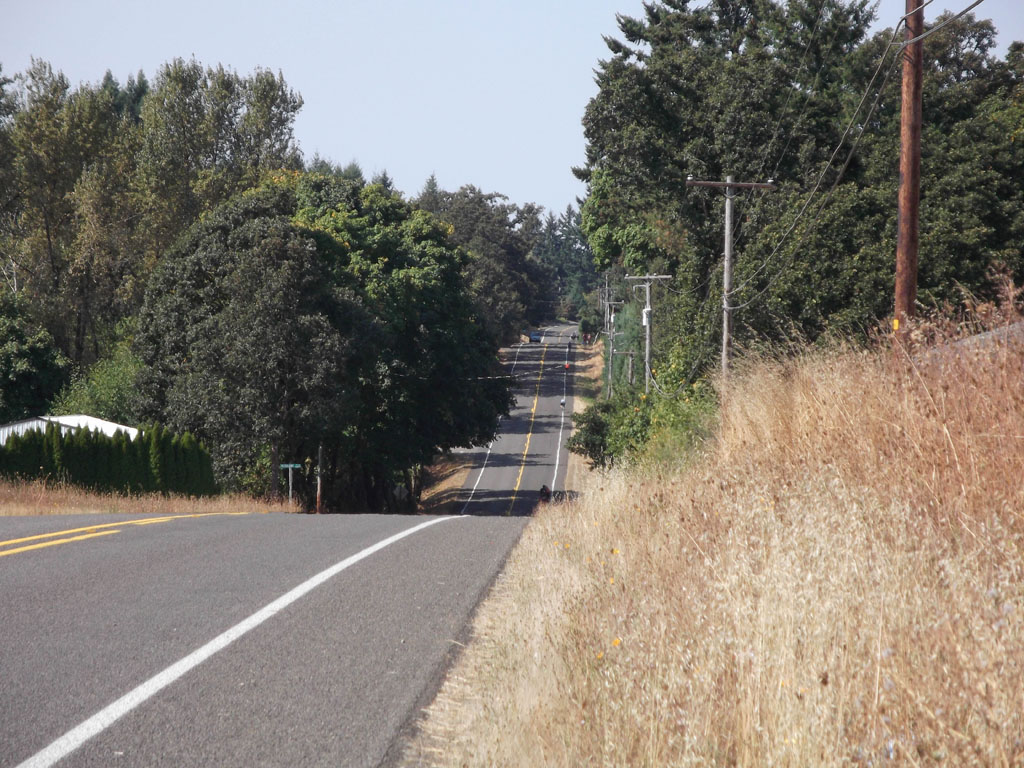 I think my exact words were: “Are you kidding me? COME ON!”  I mean really, who puts the hardest hills at the last 10 miles of the event?! That’s just mean. I saw the hill coming so I had plenty of time to dread it, anticipate it, and get nervous butterflies in my stomach. I huffed and I puffed and I made it up that hill without feeling awful! I was really proud of myself. Michael and I took a little break at the top. 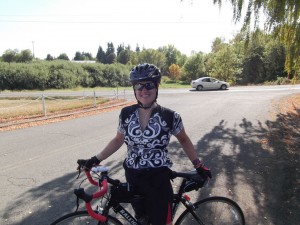 Thankfully, the next part was a downhill coast. I’ve never been more happy for a downhill descent. We were so so close to the end. The next part of the route was on a really busy road. The bike lane was pretty wide but the cars were going really fast. It made a little bit nervous. Luckily there weren’t any crashes or anything (that I am aware of) during this event but when we first started out I did see a car almost clip one of the cyclists and that was scary. 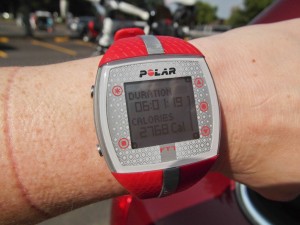 We arrived at the starting point happy and accomplished! Michael reached out and held my hand for a second while we rode into the college parking lot. I had a big smile on my face and I felt SO HAPPY that I ended my summer on a high note. We did it!!! 5.5 hours of actual riding time! (I didn’t stop my watch during our lunch break.) It was a little slower than I had predicted we’d be but that damn wind slowed us down. 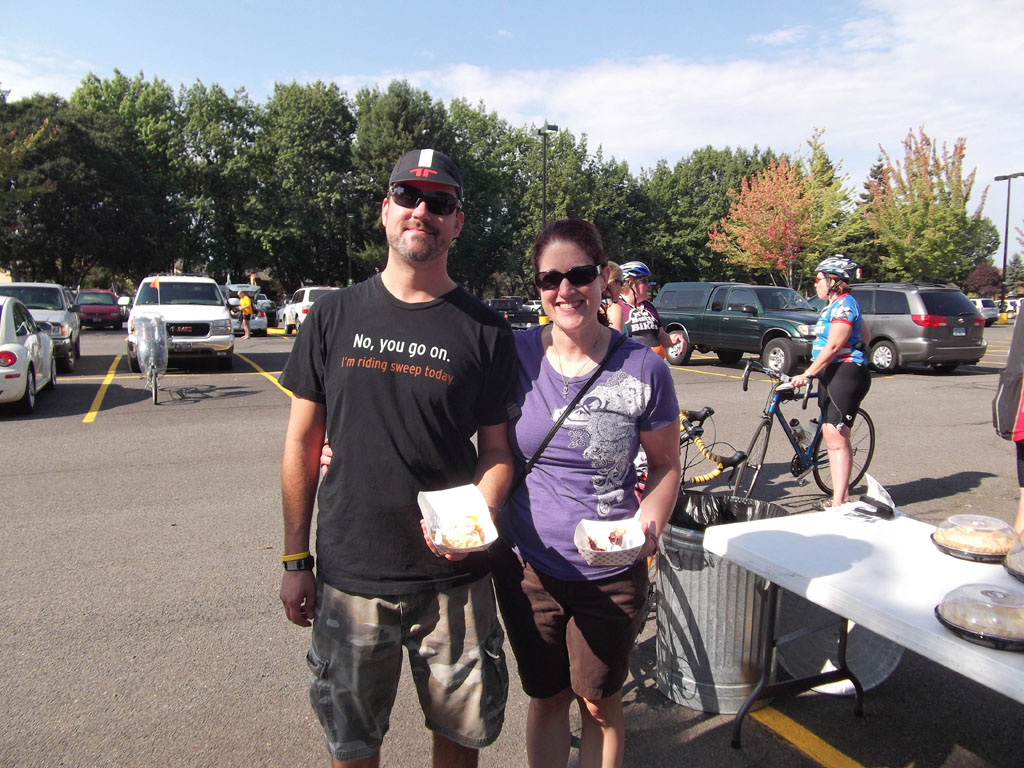 How was I feeling? Awesome! I felt even better once we changed out of our spandex! My body felt really great after I got off the bike. I was expecting to be stiff or sore but I wasn’t. After we changed and locked up our bikes, we grabbed our pie reward. You could choose Marionberry or Peach. It’s been years since I had Marionberry pie so that’s what I got. Michael got the peach. (I won’t lie, I was tempted to go back for a slice of the peach, but I resisted). 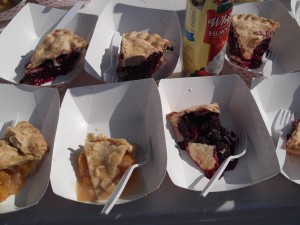 That pie was to-die-for. 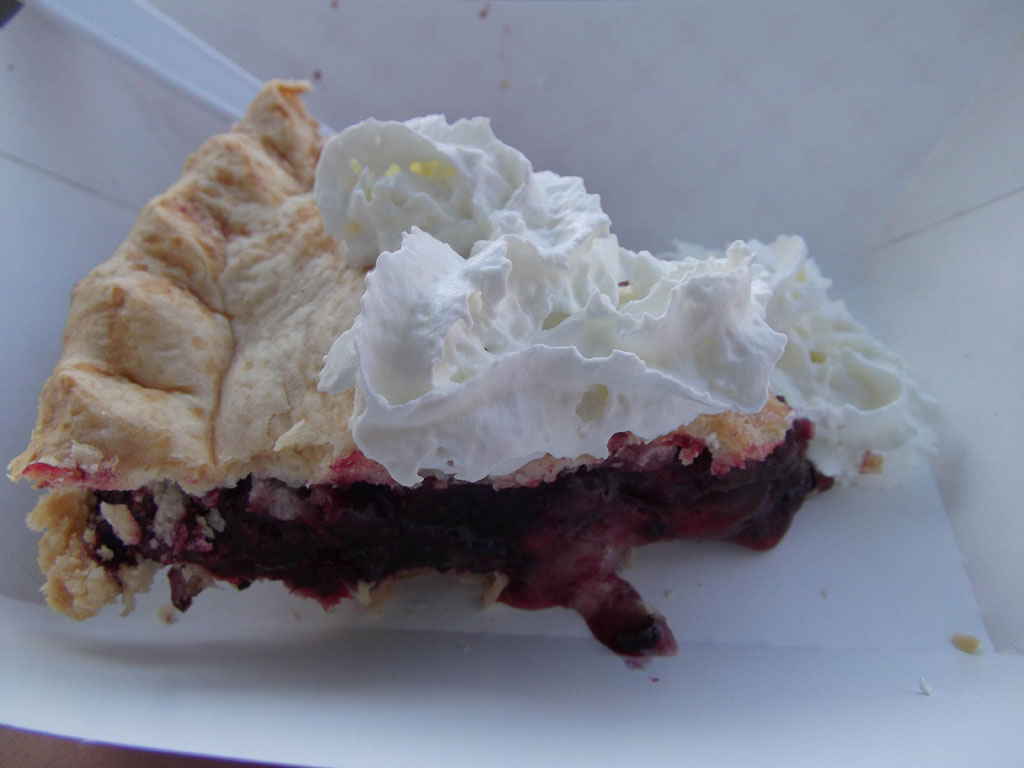 Doesn’t that look good? After relaxing for a bit, we drove home. I was sweaty, sticky, sleepy and ready to be home. I took one of the best showers of my life, second only to the post-Hood to Coast shower–slathered on some Biofreeze and put on my compression tights while I relaxed. I felt awesome. 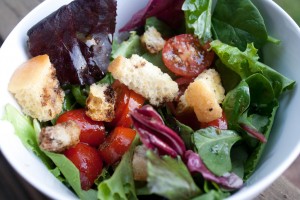 Dinner was simple. Michael grilled up some steaks, I steamed the last of our broccoli and made salads. 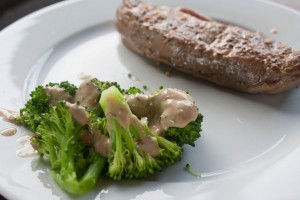 I also opened up a nice bottle of red wine that we got the last time we went wine tasting. I figured a nice bottle of wine was a good way to celebrate a good day! I had one glass of the red with dinner and it made me want to sleep. I may or may not have been in bed by 7:30 p.m. Sunday night! 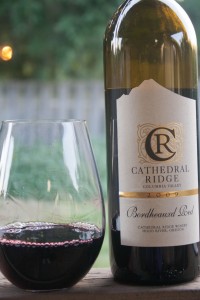 This is what I wanted. I wanted to finish the summer with a happy fitness memory. Sure, it wasn’t the full 100 miles like I had hoped to do this year, but that doesn’t mean 64 miles is anything to sneeze at. I am proud of myself. I’m proud of Michael for doing it with me even though he wasn’t really in cycling shape (he’d been golfing and using the kettle bell more than cycling this summer). I was happy he was at my side to do the bike ride and that we both felt pretty good at the end!

QUESTION: Did you have a fitness event this summer? How did it go?