Since I’ve kept my weight off for four years now, I’ve kind of forgotten what it feels like to get attention–where everyone’s focus is my body. This is just me, give or take about 5 pounds, I haven’t changed much in the last few years and I’m used to living in this body. 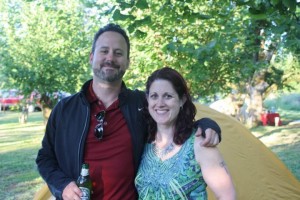 Last weekend I went to my family reunion. It was the “big one” that I grew up going to, not the small one I’ve gone to the last few years. No, the “big” one was the tradition for 26 years. It was on my aunt’s farm here in Oregon and it was actually two families that were joined by marriage and stayed connected after my uncle was tragically killed. I grew up with this huge, extended family and it was such a fun environment for a kid. About 6 years ago, my poor aunt decided to retire from hosting it and I don’t blame her; imagine hosting a party for 3 days for 150+ people! This time, there were 108 people! 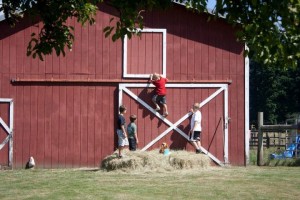 Well, the last time I saw most of those people (the other side of the family) was when I weighed 250 pounds. It was so weird being transported to the time in my life when my body was changing and people noticed it. Despite feeling awkward and uncomfortable, I had a fantastic time reliving my childhood at the family reunion. I saw people I haven’t seen in years and I got to show Michael what it was like (instead of just describing it). 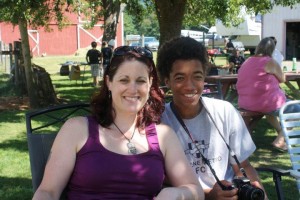 We pitched our tent in the hazelnut orchard with everyone else. The house is an old farmhouse from the 1800′s and while my aunt and uncle have updated it and made changes, it’s still old. 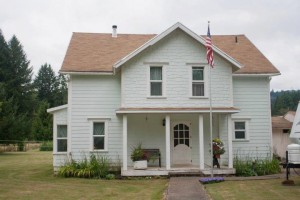 I totally unplugged for the weekend and just relaxed. It was so nice to catch up with everyone. The sun was out, we were camping and lounging in the shade. 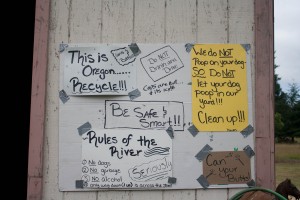 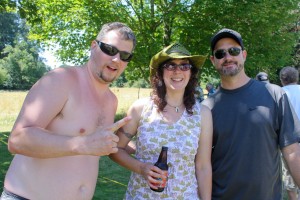 Of course there were shenanigans, too. (The girl in the cowboy hat above is my cousins Kristin and if you live in the Poulsbo, Washington area, they have a food cart! Check it out!)

Yes, that is my uncle below riding a bike backwards. It was quite impressive, actually. I am pretty sure I cannot do that! 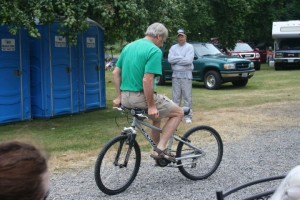 One of the coolest things about this weekend event was that the kids just run wild! My aunt has 10 acres of farmland and for three days, the kids run around having fun, playing games, playing with the dogs, and just being kids –totally covered in dirt all weekend long. I remember those days…so much fun! (Flashlight tag, anyone?) 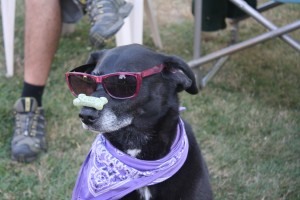 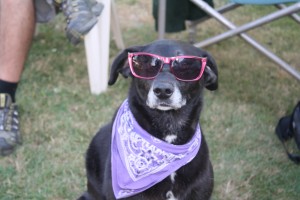 Friday is often a slow day because people are traveling to the farm. This year we had family travel from California, Florida, Texas, Wyoming, and Washington. Friday night my uncle grilled up burgers for everyone. I made a cheeseburger on a sandwich thin, had pasta salad and some veggies and fruit on the side. 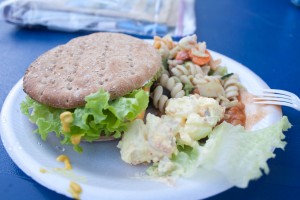 When night falls, the campfire gets bigger and bigger and everyone sits around it talking, drinking, laughing, and sometimes singing. Some of my favorite childhood memories are of this family reunion and sitting around the campfire. 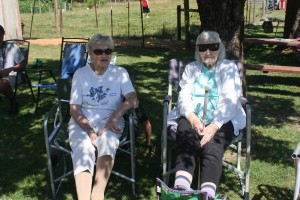 My 90 year old Grandma (left) put on a big show playing the harmonica around the fire. Her older sister, Mary, who is 92, joined in and played as well. It was a really special moment and I’m glad I was able to see the two of them play together.

Seeing everyone was so special and I was happy and content all weekend long. I did well with my food all weekend long (I even skipped the s’mores temptation!), often being too busy to even notice I was hungry!

QUESTION: Does your family have annual reunions?