This week seems to be a time for reflection and reminiscing. First with a feel-good recipe on Monday and now I’m remembering the first days I moved to Portland.

For our anniversary a few months ago, Michael got us stellar tickets to the Nine Inch Nails concert, which was Monday night. We went home after work to play with Bella for a little bit and then headed back out into the dark, rainy night for a date night before the show.

We wanted to get dinner somewhat near the Rose Garden to make it easy. I suggested Montage. Montage is a Portland staple, a must-see for atmosphere and fun. Montage is a restaurant  famous for its mac n’ cheese, its quirkiness and is located underneath the Morrison Bridge. It’s a few blocks from the waterfront, near the train tracks; it’s kind of a dank, dark, creepy location, complete with homeless people lingering around. But if you can get passed that, give the place a try.

Stepping into Montage I was taken back to another time. It was really like stepping into a time machine. I went there when I first moved back to Portland by myself, so about 12 years ago. Why I never went back is beyond me. But as Michael and I got a seat, I started thinking about those days. They were both hard and exhilarating–I was coming off a really, really bad break up and my heart was ripped open–but at the same time I had a feeling of confidence and happiness because I was ON MY OWN. I’d done it. I was living on my own, in my own apartment, no roommates. I’d made the move from Seattle to Portland without a man in my life and it boosted my self-esteem. Being independent is so important to me.

Anyways, Montage was the first restaurant in Portland that had communal eating style tables. They were long banquet tables set up so that you were sitting next to a complete stranger while you ate dinner. In 2001 this was very odd to me, now it’s a Portland norm.

The menu includes alligator, frog legs, half a dozen different types of mac n’ cheese and a two page drink list bigger than the table we were sitting at. I love their goofy names for drinks. I ordered a “Laura Palmer” and high five if you get the reference. 🙂 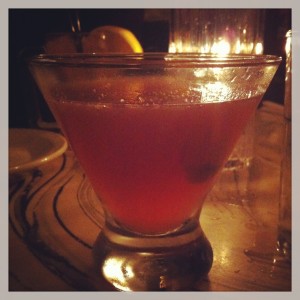 The drink was tart and citrusy. They had one drink called “The Ex-Wife” for $250,000. “Nighttrain and Thunderbird on the rocks made payable in monthly installments for the rest of your life.” Hahaha! 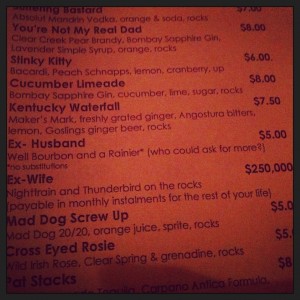 For dinner I ordered the “Spold Mac” (terrible name by the way) which was a blend of the regular mac n’ cheese and their spicy version. It was creamy and had a kick a to it! Michael got a steak with bleu cheese on it, which came with mashed potatoes, corn bread muffins and a side salad. I ate most of my mac n’ cheese and then took the rest home. They wrap the leftovers into foil art! 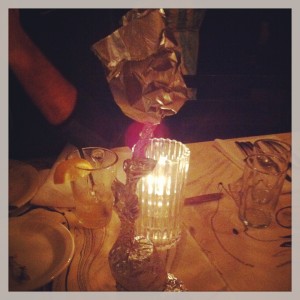 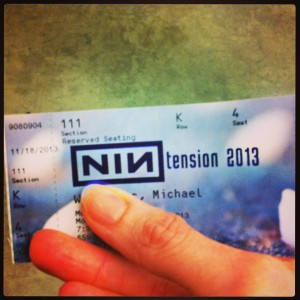 After dinner we scampered up to the Rose Quarter just in time for the opening band’s last song (no idea who they were). NIN came on stage and gave a kick-ass performance. I’ve seen them once before, with Michael, and he’s seen them like 5 times. NIN was a band I loved the moment I discovered Pretty Hate Machine when I was around 11 or 12 years old… Hearing him play a lot of the songs from that first album was like wrapping myself in an old familiar blanket. 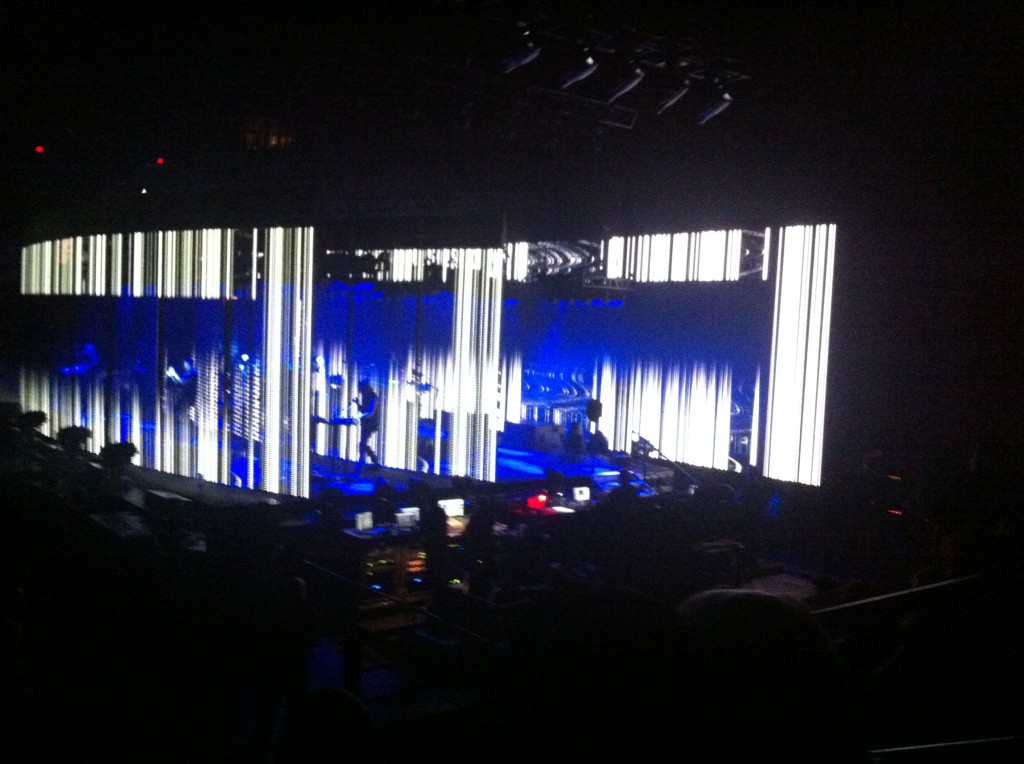 Our seats were amazing. Michael splurged and got us seats just a few rows back from the mosh-pit. We were so close I could see the sweat dripping off Trent Reznor! They played a lot of the old favorites and a bunch of the new songs. They sounded fantastic. Flawless performance. The finale was “Hurt” and you can watch my video of it here. It was probably the best rendition of “Hurt” I’ve heard them do. It sent chills up my spine.

The show was done around 11pm and we hurried home. I let Bella out to run around a little bit and go outside to potty then it was bedtime. Needless to say, the next day was rough! I’m officially old. Staying out that late on a work night is brutal! But the show was so worth it. Have you ever seen Nine Inch Nails live?