The big day finally arrived! I was excited to run the 5k (after like 3 years off from doing running races) but also nervous. I did the Couch to 5k program, as you can read in the updates I did, and while I had enough time to train for it, I don’t necessarily feel like I was well trained for it. I didn’t feel prepared and honestly could have used another month to train for it. But instead of beating myself up about it, I decided to look at this as just something fun and not have the expectation to run the entire thing. Walking breaks are ok.

I did the Gabriel Park 5k with my friend Robyn. I am so glad we were able to run it together. It was nice to have the encouragement of a partner. I woke up early in order to get over to that side of town in time and pick up my racing bib. I met up with Robyn and we got ready for the race. It was going to be a hot day–in the high 80’s–and they were predicting thunder storms too, but thankfully at 8am it wasn’t too hot already.

This series is obviously meant for families and to encourage youngsters to try running. They did a little kid 1k before the race started that was totally adorable! There were so pretty tiny runners! Some that needed the help of mom and dad, too. 🙂 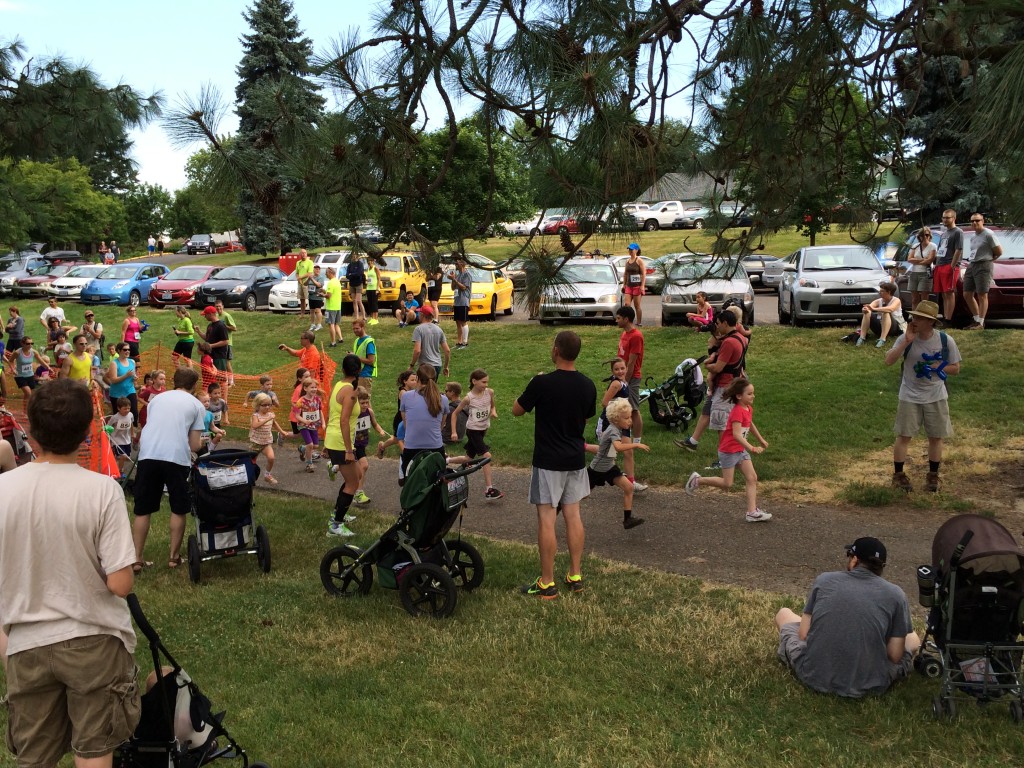 Robyn and I got our bibs and hit the bathroom line before it was super long then stretched. It was almost time! When I had signed up for this 5k I didn’t really give much thought to which park. I was more focused on the date. As the race got closer I realized, Oh crap–that’s the park in SW Portland with all the hills. I used to live in Multnomah Village ages ago and Gabriel Park is quite hilly. 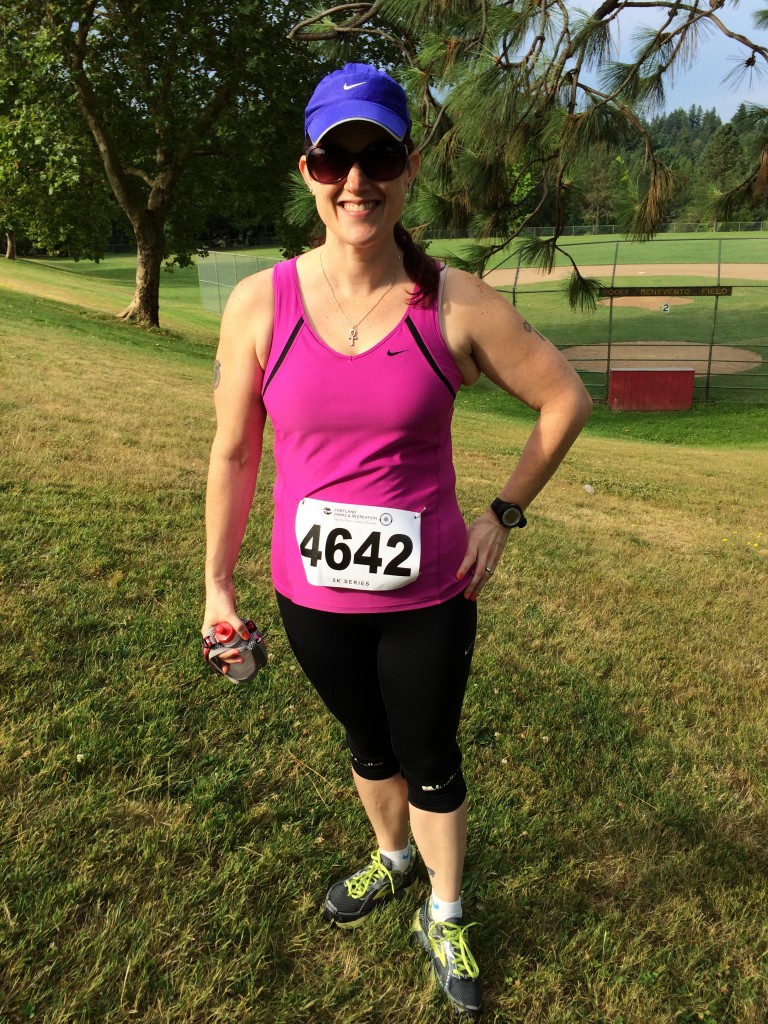 We got in the middle of the pack and the race started. The trail through Gabriel Park is rather narrow and there were spots where there was gravel or tree roots coming up so I just focused on where my feet were going. It was partially downhill for the start. In the past I made the common mistake of starting too fast in races. This time I didn’t–I knew that I needed to go slow on this race and the narrow trail kind of forced me to slow down. 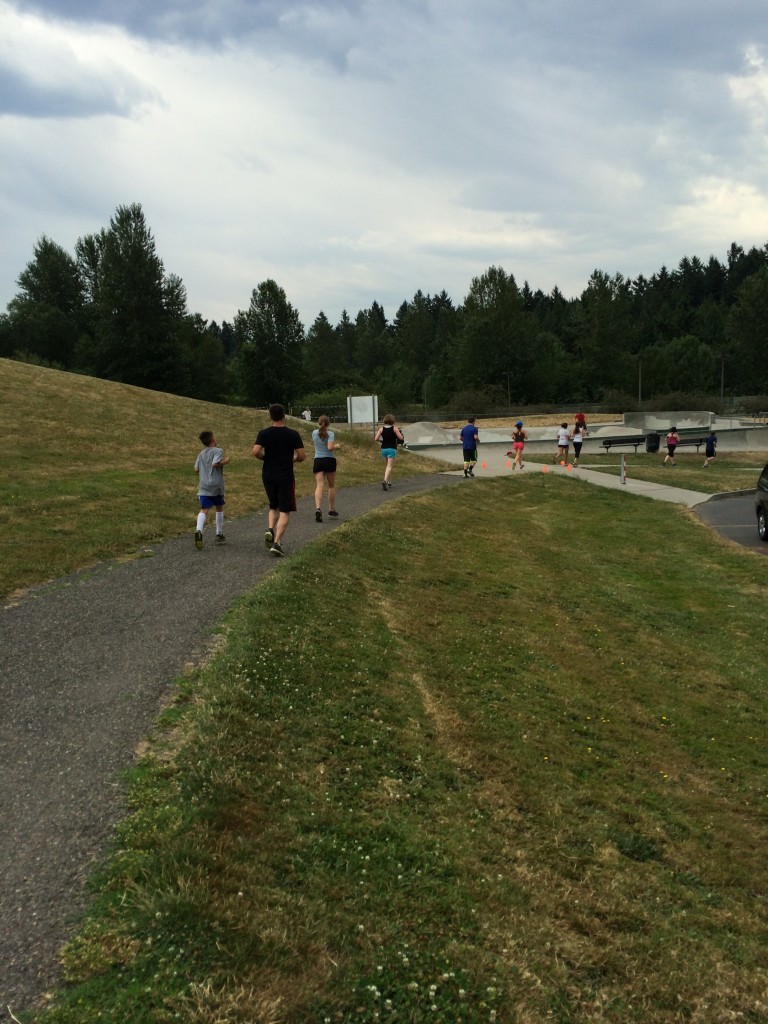 The trail went downhill and then started to go into a wooded area. It was almost like trail running! It was darker (sunglasses came off) and the ground was soft with dirt and pine needles, so that was nice! 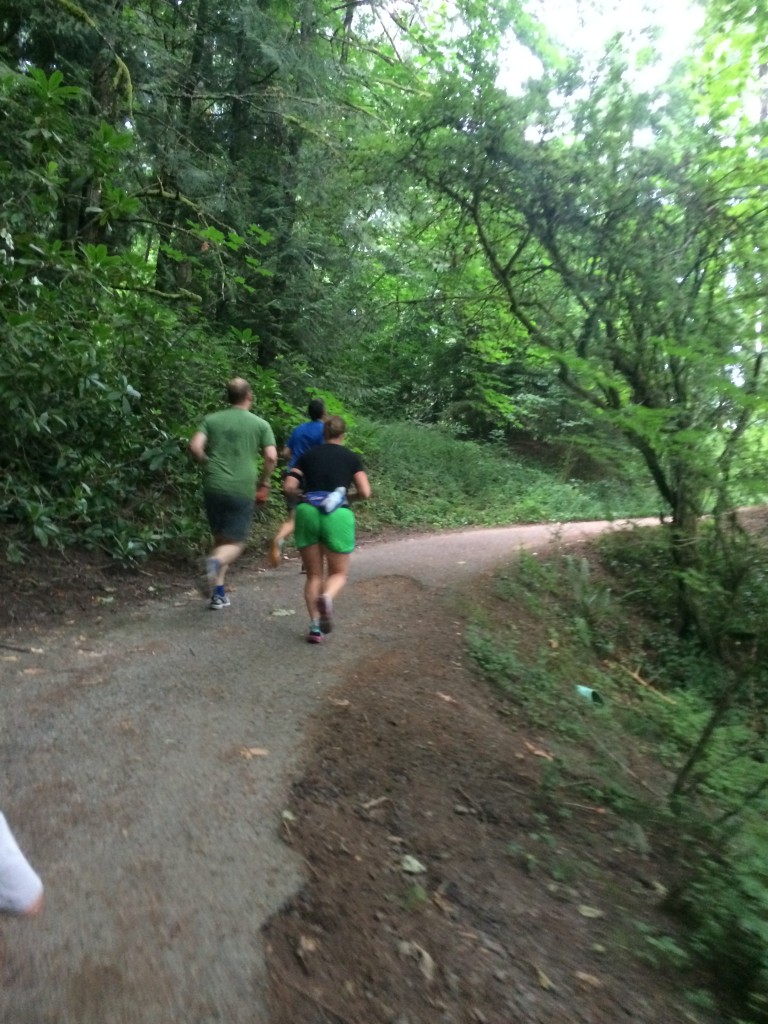 The course was two times around the park to make it a 5k. I started out pretty strong without walking too much, and then I took too many walking breaks to count. The hills were killer and I started walking up the steep hills instead of trying to run them. I definitely liked the wooded part of the trail best (except for the downhill parts because that made me faster LOL). We crossed a few different foot bridges over creeks, too. 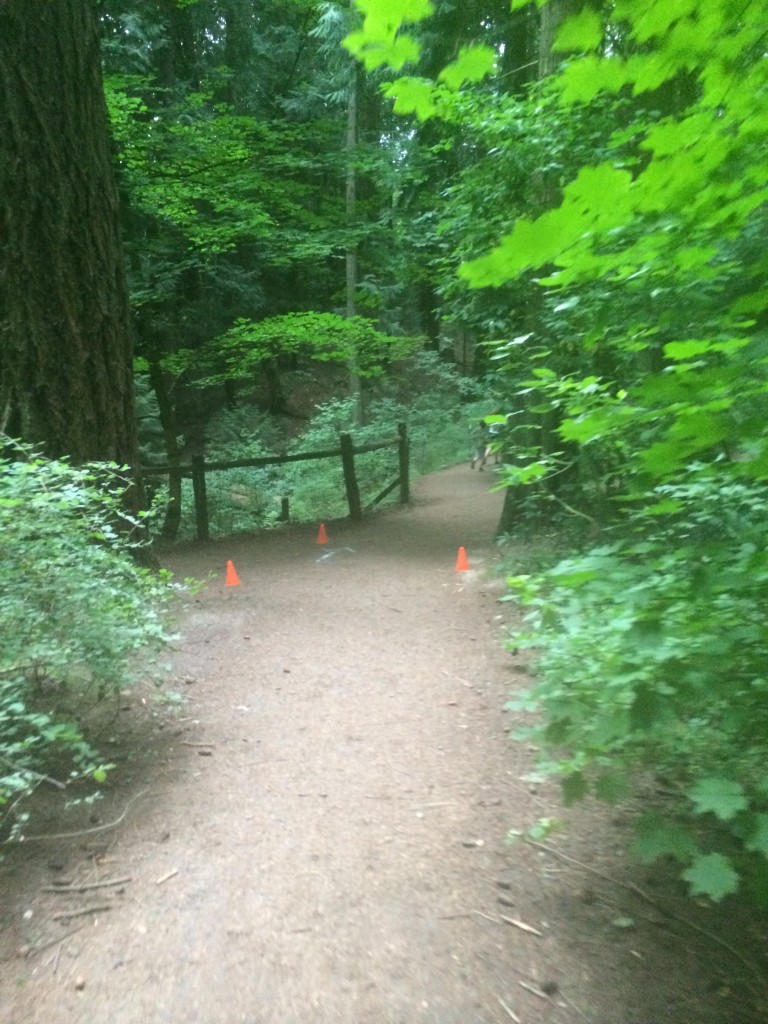 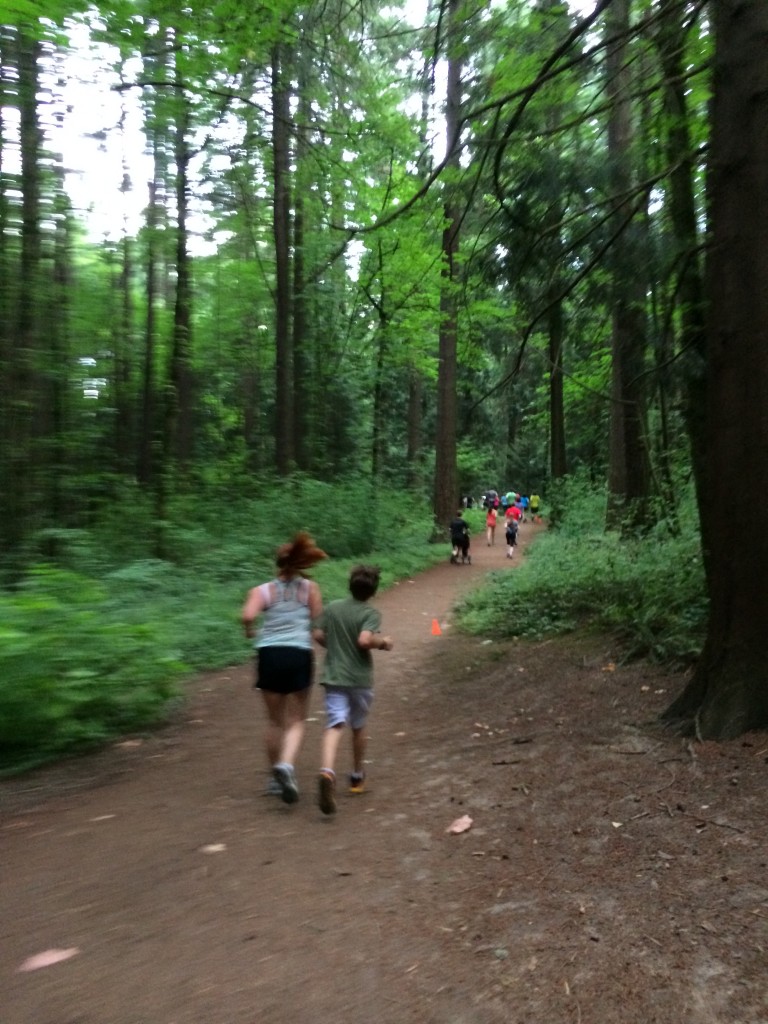 That poor kid in front of us, he kept telling his mom he felt like he was going to puke. Robyn and I kept passing them and then they’d pass us whenever we walked. I wanted as far away from that kid as possible in case he did puke! After making the first time around the park, I was still feeling pretty good and my knees were doing great. Towards the tail end the route the hills were getting a lot harder and I ended up walking them. I knew that was going to make my “official time” crap but oh well…what are you gonna do, right? 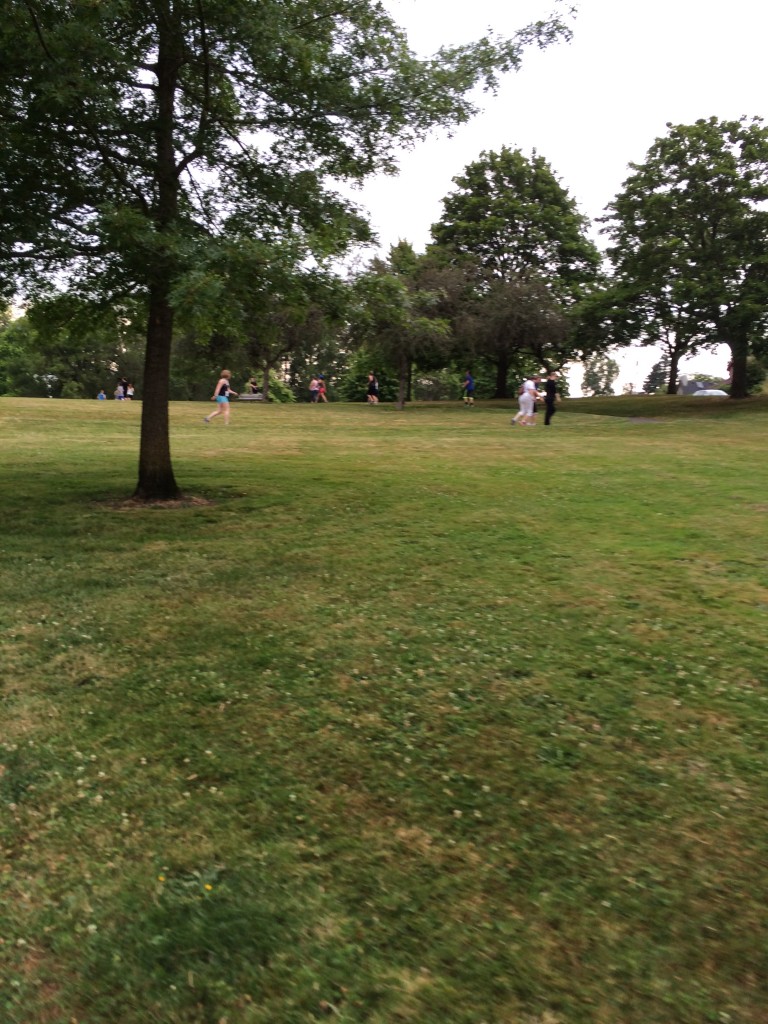 It’s difficult to tell in the above picture but the parts of the trail that had hills also had switch backs. This picture was taken from one of the switch backs at the bottom. So it was pretty steep at the end. Once Robyn and I got to the top of the hill we could see the finish and it was pretty much downhill. We finished strong and ran across the finish line. 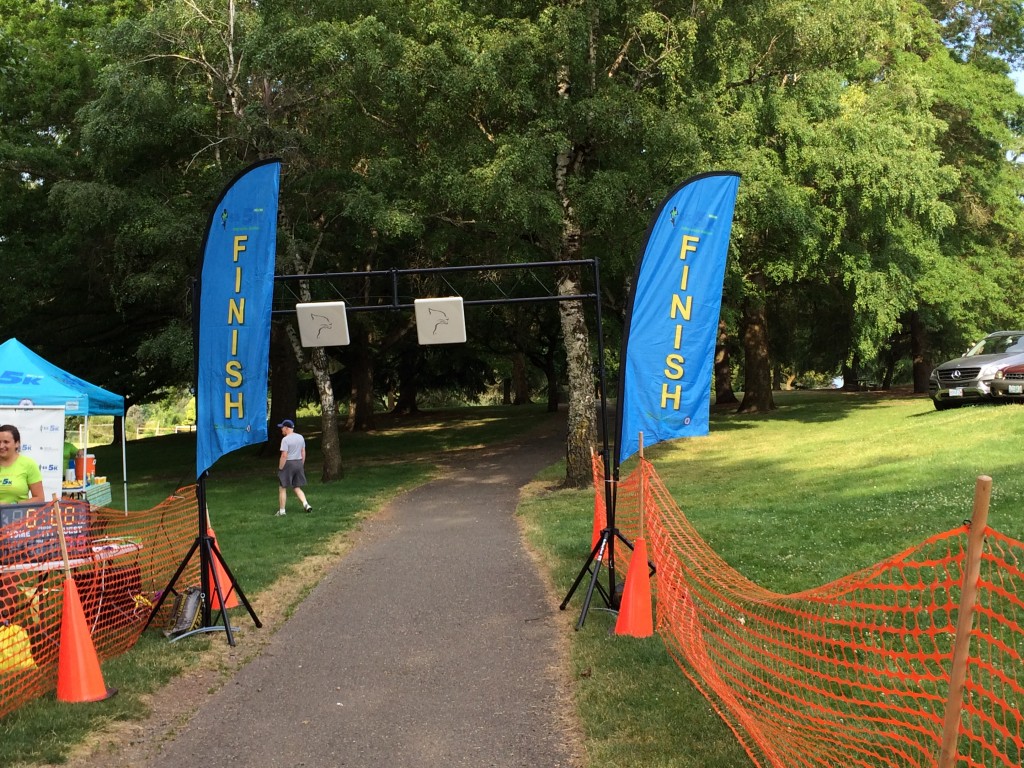 (That picture was taken before the race.) The finish line was crowded and there was music and a photographer. The person on the microphone was encouraging and congratulating all the runners as they crossed the finish line and we got our ribbons. 😀 Right as we finished the thunder and lightening storms started (thankfully no rain). It was really loud! The thunder boomed in the sky and it was kind of ominous. 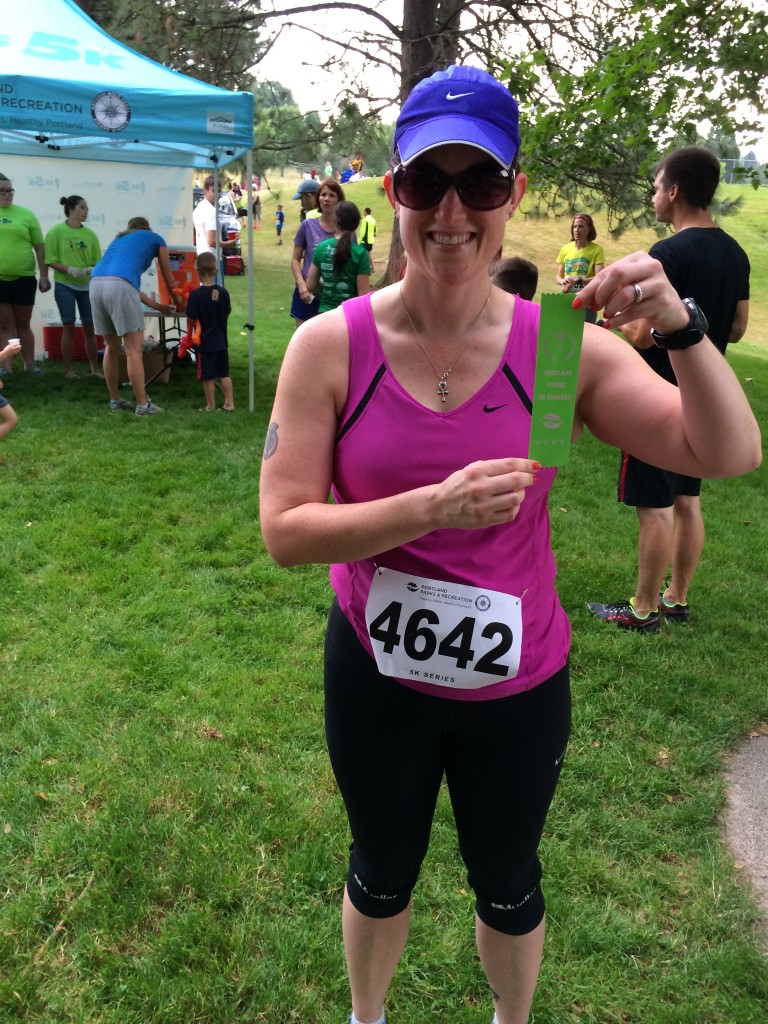 I don’t care if it’s a dorky ribbon, I like it! I’m so happy I got to race. I wish I could have run more of it but I just wasn’t prepared for hills. I had been training on a track most of these months. My knees did great during most of the race. Towards the end my right knee started to feel a little tight and achy and I think part of that was the hills and part of it was running downhill and stepping too hard. I need to be more mindful of being light on my feet. Other than that I was feeling really good. 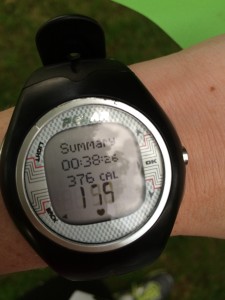 After that Robyn and I went out for brunch. Pre-race I’d had a bagel thin with cream cheese with some vanilla yogurt mixed with strawberries and blueberries. I was ready for food AND COFFEE.

We went over to Down to Earth Cafe in Multnomah Village. Because I used to live in Multnomah Village it was kind of cool to go back there. I saw my old apartment, which brought up lots of weird and fond memories. There were lots of new businesses and restaurants in the Village and I want to go back and explore some of them. I just never really go over to SW Portland.

The Cafe was super cute (and small) but we got there just in time to get a table without having to wait. Other places were starting to get lines waiting. I ended up ordering the brie and turkey grilled sandwich with a salad and dijon vinaigrette. It was all pretty tasty. I do think the sandwich could have used maybe some balsamic or something on it but other than that it tasted great. Service was excellent and it was pretty affordable. They had vegan, vegetarian and gluten-free options. Robyn got the Northwest Scramble and it came with an English muffin and cottage cheese (it looked really tasty). 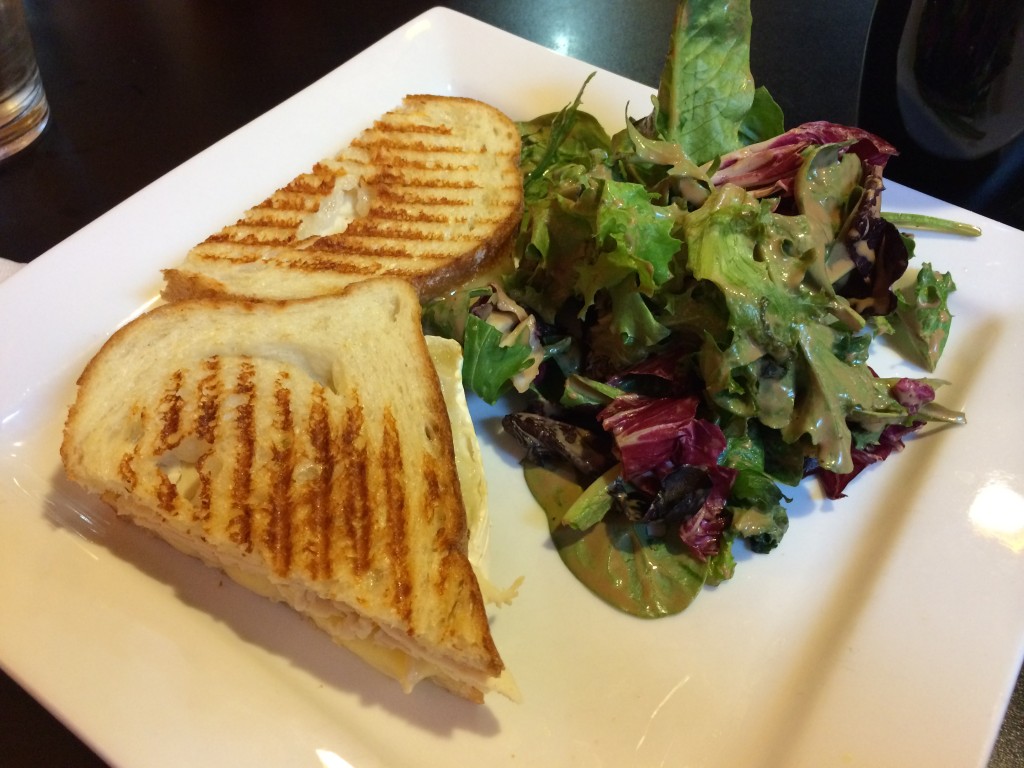 After brunch I headed home. First things first: foam roller! Ouch ouch. I did a few times throughout the day. Then I took a bath with the eucalyptus and spearmint epsom salts. The hot bath felt so nice after that sweaty, humid run. Both Bella and Fat Kitty perched on the edge of the tub and supervised, of course. I closed my eyes and felt like I could have taken a nap! Man I was tired. After the bath I put on some Biofreeze on my quads and iced my knees just in case.

I felt really really good the rest of the day, if not a little overly tired. The next day I woke up a little stiff but ok. Walking helped loosen things up. My quads were sore and my right knee was a little achy but it wasn’t painful–just your typical soreness after a hard run.

I was so happy with the race. Sure it was harder than I was expecting, I had to walk more than I had hoped, and my time wasn’t anything special, but I’m glad I finished it successfully and felt good afterward.