On Saturday we got up early-ish and packed up the car for a day trip and headed to the Coast! We timed it perfectly and Logan had his morning nap in the car. Seaside is 90 minutes or so from Portland and it’s a pretty drive. It’s one we haven’t done in a long time. Too long.

First stop: hike. We did the Tillamook Head hike just south of Seaside. It was a little weird, we drove through a residential area and then there was a new gated community of condos and just across the street from that (at a dead end street) there was the trailhead and parking lot. 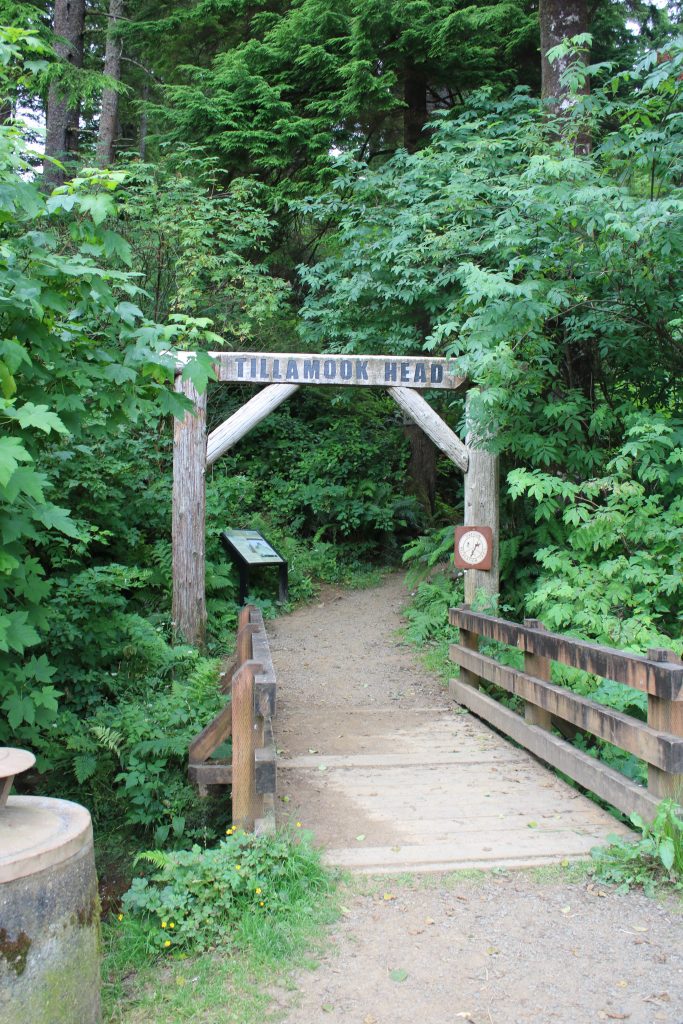 Sadly, we did not bring Bella on this day trip. I debated back and forth on it. We almost always take her on these adventures and hikes and she LOVES the beach!!!! But we planned on going out to lunch and knew we couldn’t leave her in the car while we did that, so we left her home. 🙁 I felt really guilty about it, too, but honestly it was the best move because this hike turned out to be a bit harder and not really dog/kid-friendly than we were expecting. 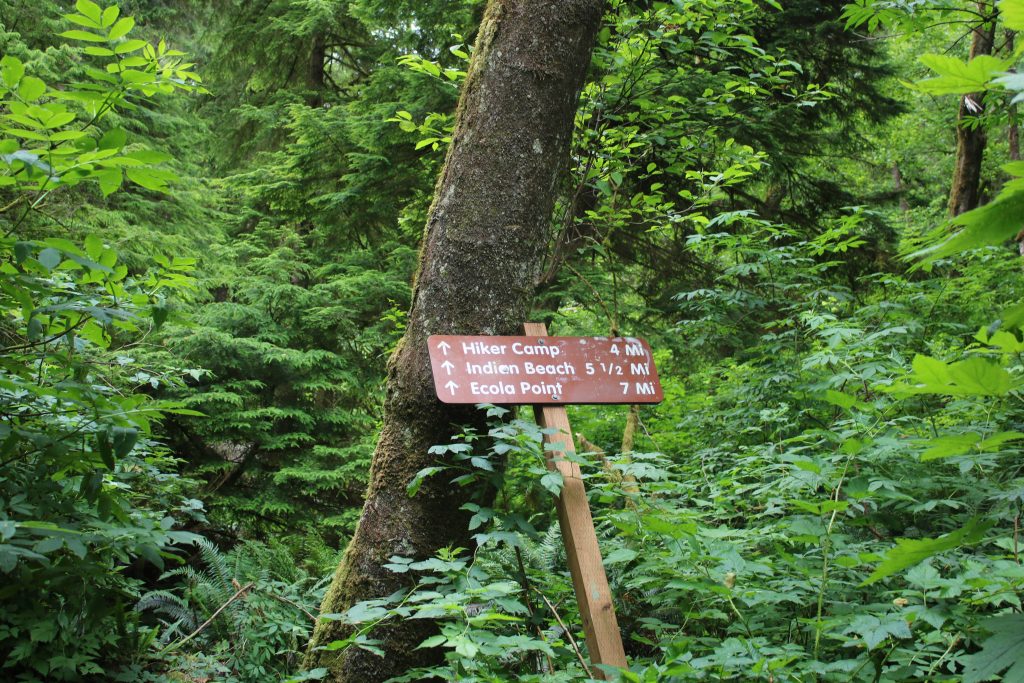 It was an uphill climb right from the start. It wasn’t particularly hard, per se, but it was deceptively steep. We climbed 800 feet up–which doesn’t sound like much, really, but it was especially considering that 800 feet elevation gain was in the first mile and a half. Also, the trail was really slippery. The hike is in an old growth forest with giant trees and ferns and lush greenery. It clearly rarely sees the sun and so it never dries out. It wasn’t muddy but the trail was SLIPPERY. There were lots of rocks and tree roots that were covered in invisible slime! We both slipped and almost fell a few times. 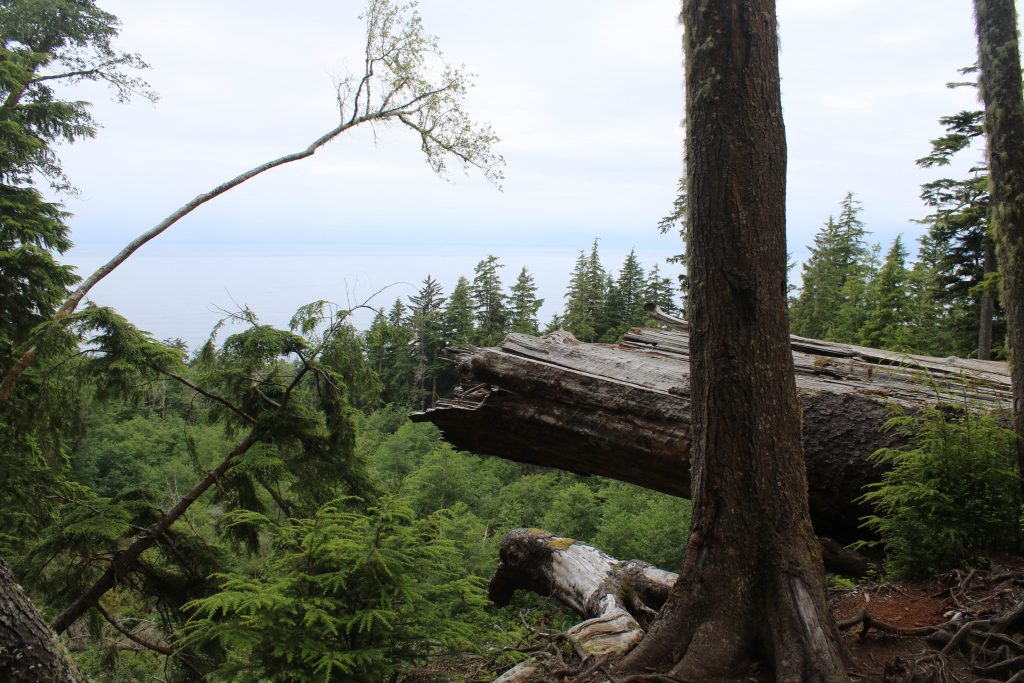 We could sort of hear the ocean off in the distance, but it wasn’t really that close and there were only small glimpses of a view. 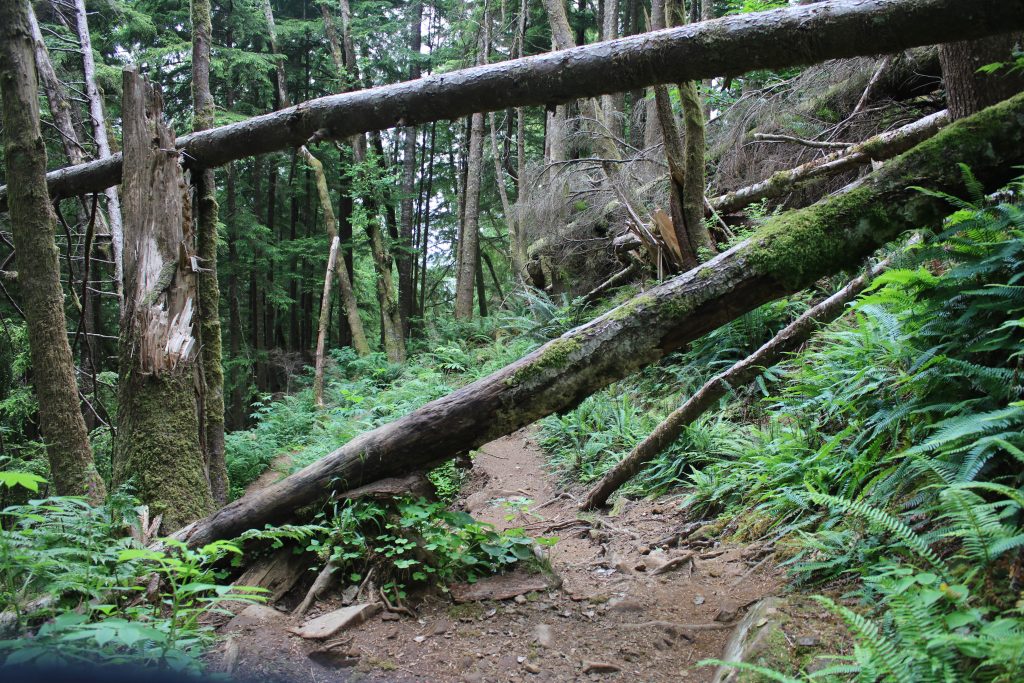 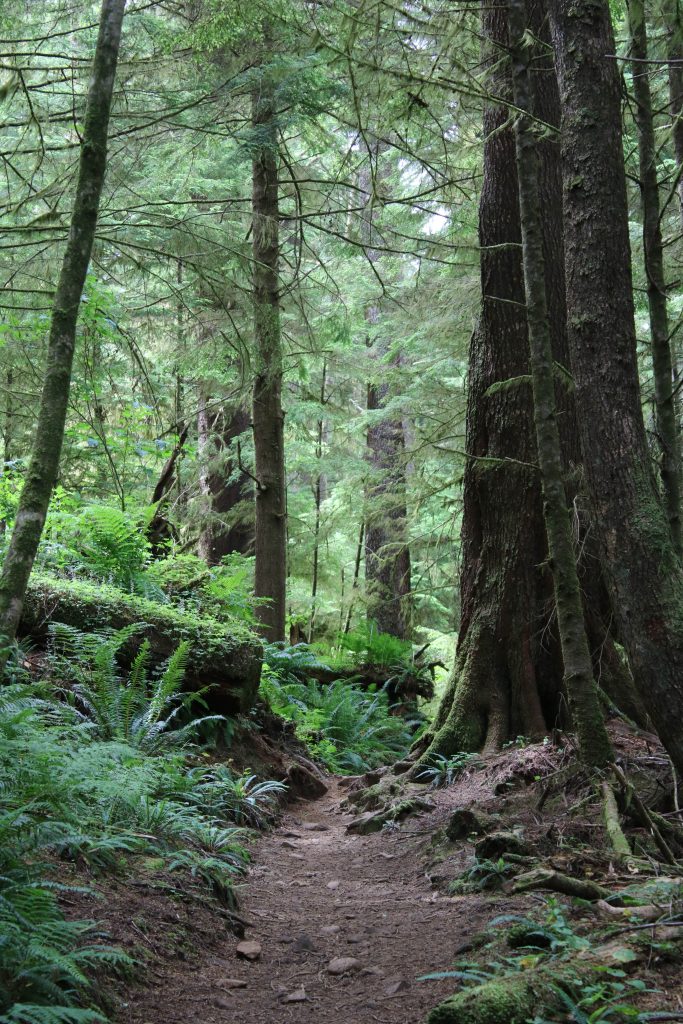 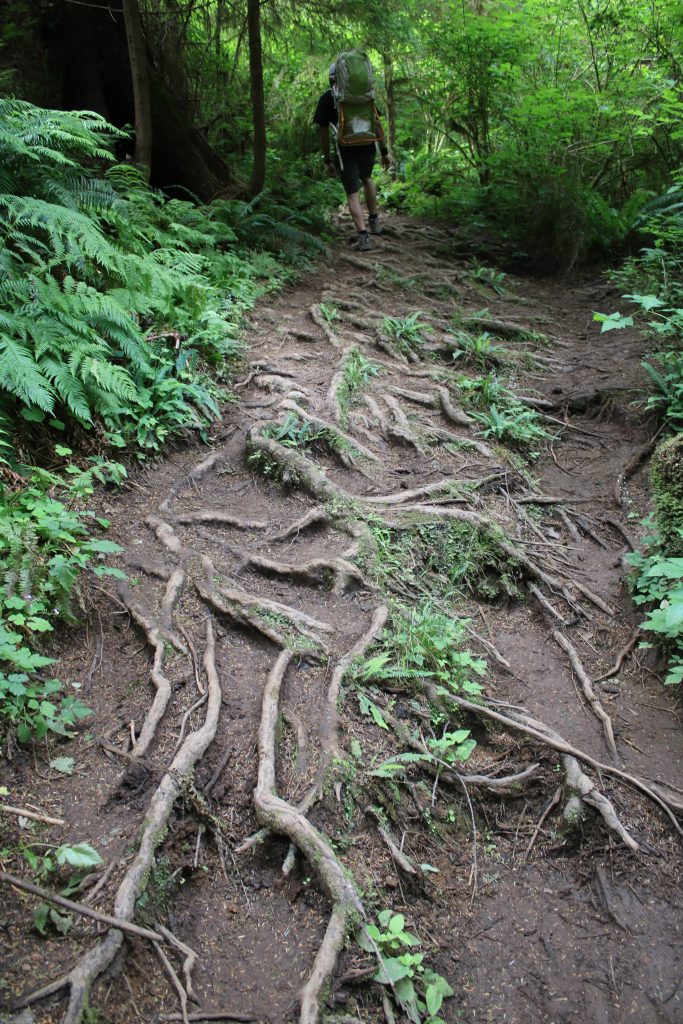 It was a really cool trail and very peaceful and quiet. Not a lot of people on it, but we did pass a few. It was also really humid! We were very sweaty by the end of this.

We got to a part of the trail that just ended. It’s hard to see from the photo below but it’s just a drop off. 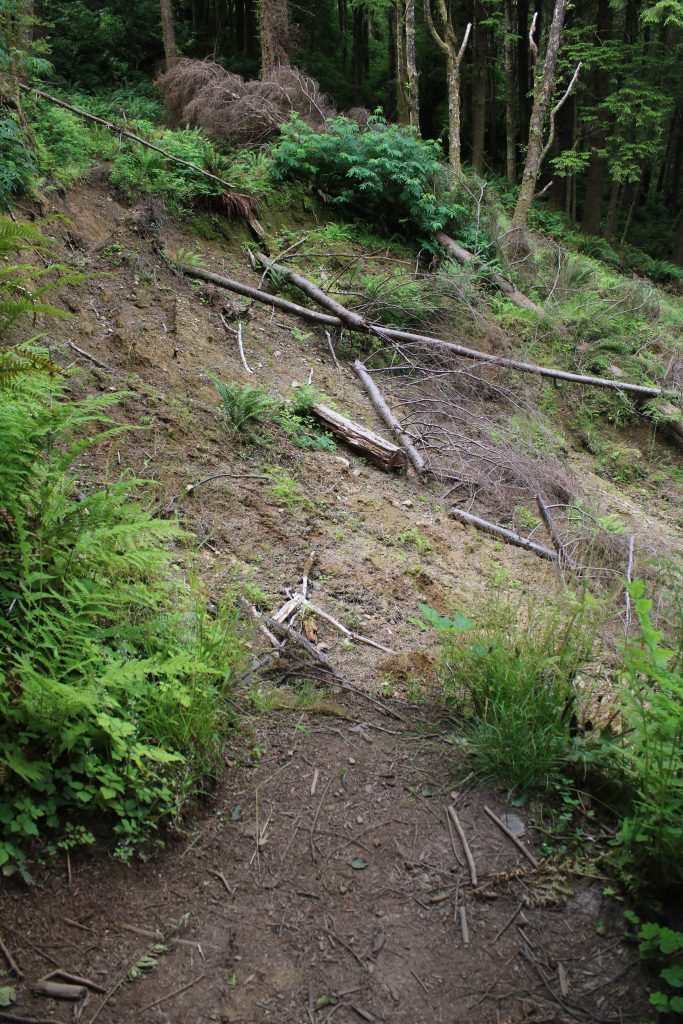 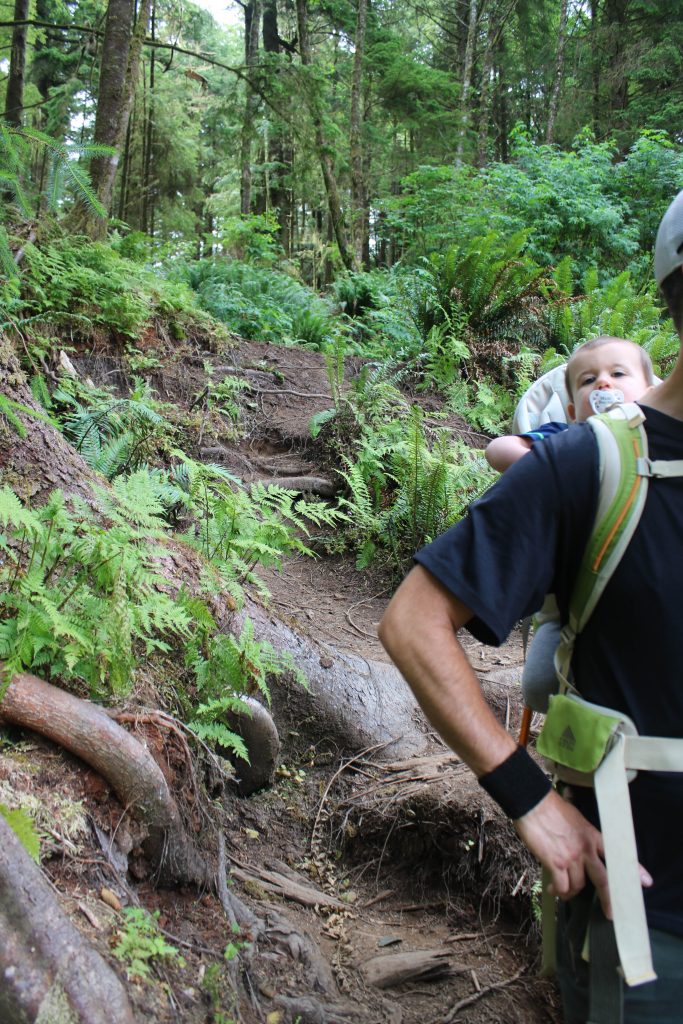 On the other side of the drop-off, there was this wall that we’d have to climb up. We decided it was a good time to turn around. I was a little worried about the descent because of how slippery the trail was, and I knew that we were going to want to turn around soon anyways to stay on a schedule for lunch and naps, etc. It turned out to be the right move. So we turned around and hiked back down the trail. 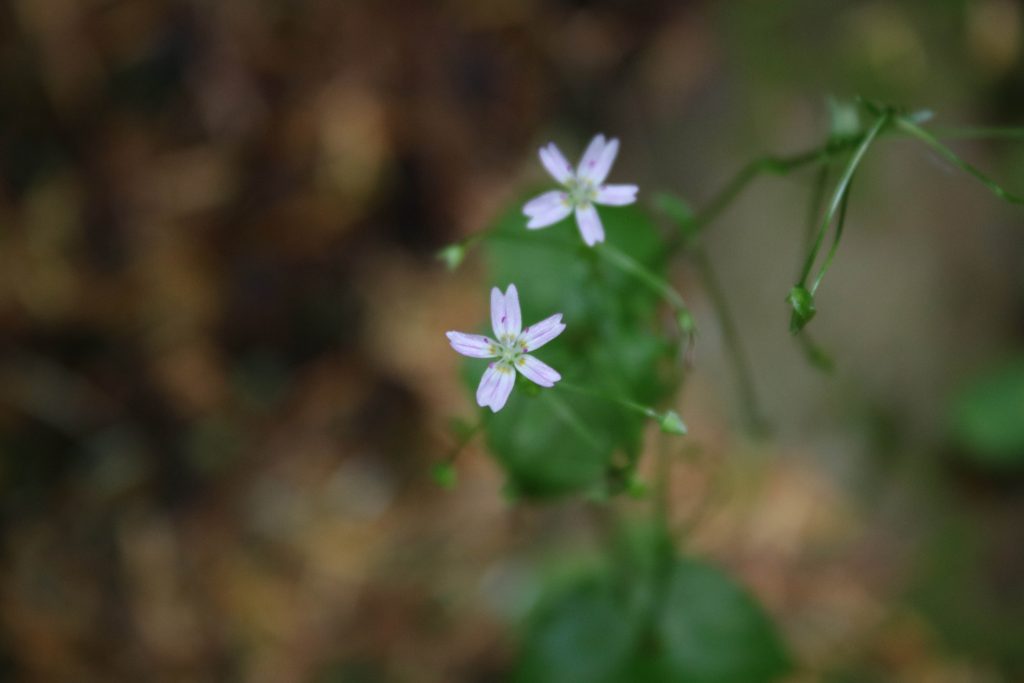 There were some “steps” on the trail that were helpful and some of the roots kind of made “stairs”, too. Michael was struggling with the baby backpack on this hike (another good reason to turn around early). We both had to look down the whole hike to watch our footing, so it was kind of a neck strain. 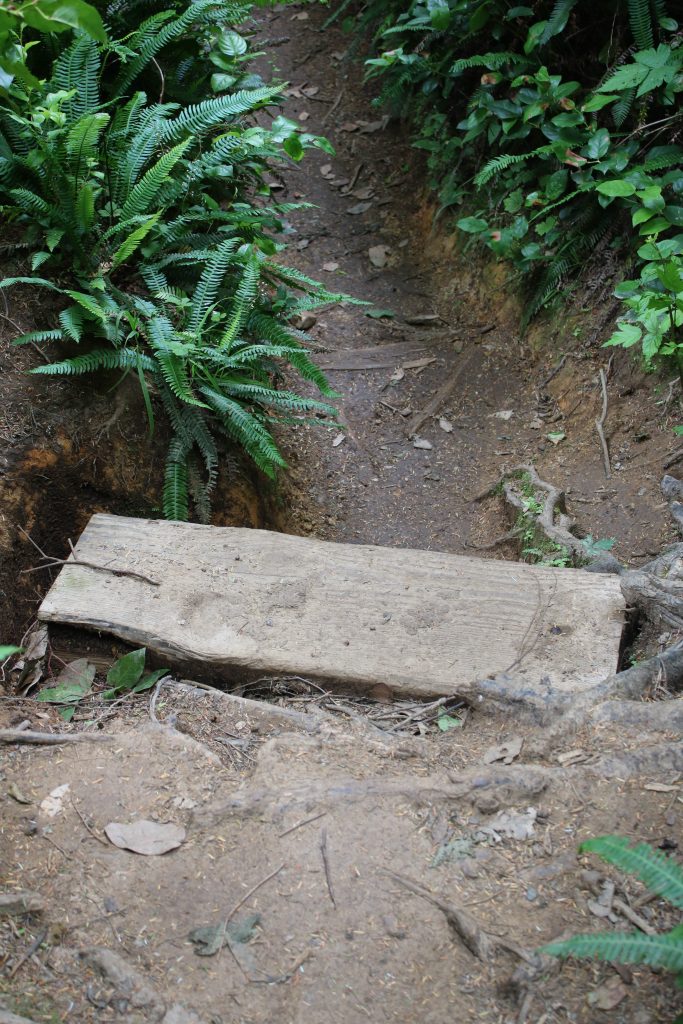 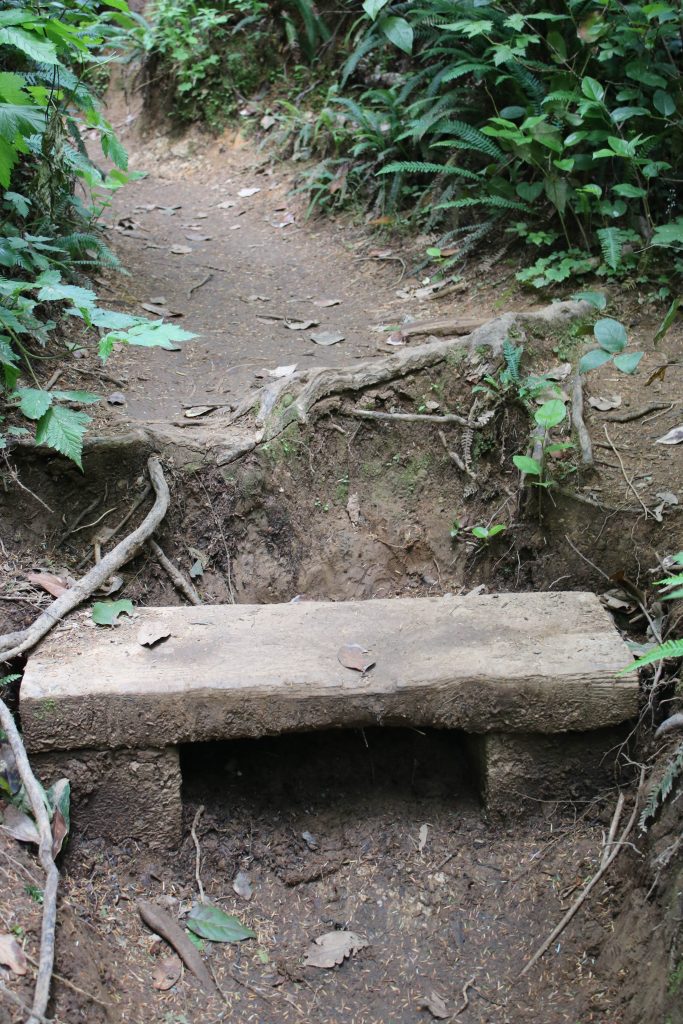 We got back down the trail and changed clothes, changed Logan, and packed everything up. This is the condo community right at the trailhead: 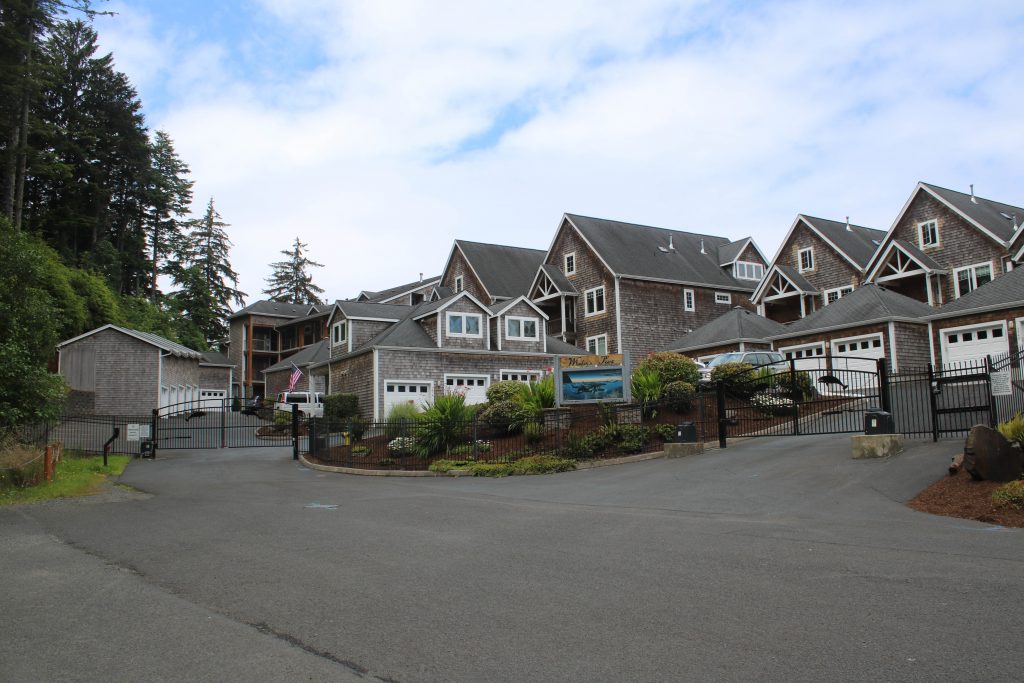 We hiked 3.5 miles in almost 90 minutes. The calorie burn was great! 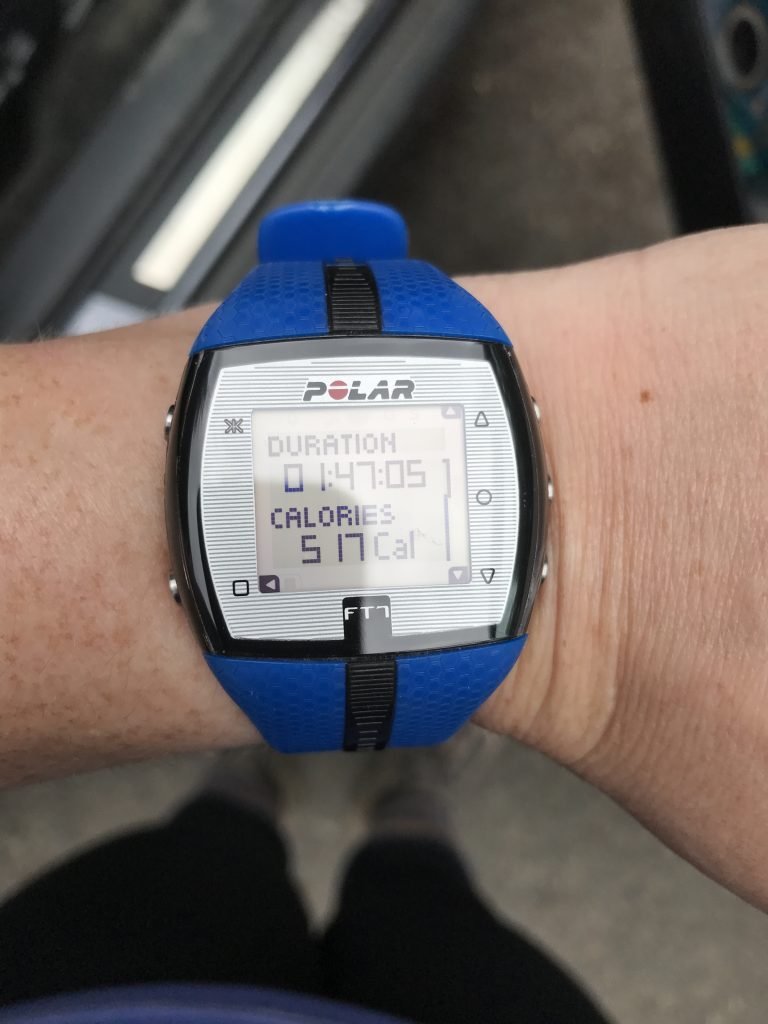 For lunch we went to the Firehouse Grill in Seaside. It was a cute cafe with decent reviews online. We got there just after the lunch rush, so we got a table right away and service was pretty good. I fed Logan and he was pretty content to watching everything that was going on in the restaurant. Then our food arrived. I was famished.

I got the clam/mussel chowder and a crab cake appetizer. The chowder was pretty good, not the best, but ok. The crab cake was great! And it was topped with fresh crab meat. Logan LOVED the crab! He devoured it. 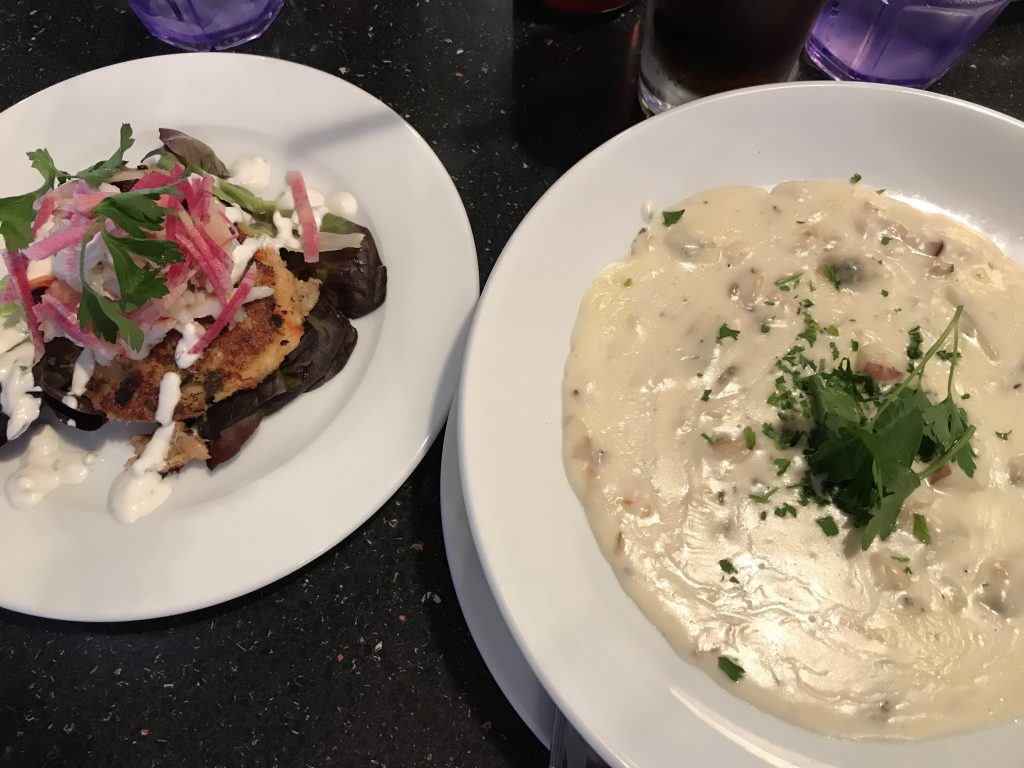 Logan had a few bites of the chowder but wasn’t really a fan. But he ate so much of the crab and crab cake. He loved it!

Michael got a burger and fries and shared some of his fries with Logan, who was sort of interested but would immediately spit out the fries to eat the crab when I offered it to him. Haha!

Next stop: THE BEACH! 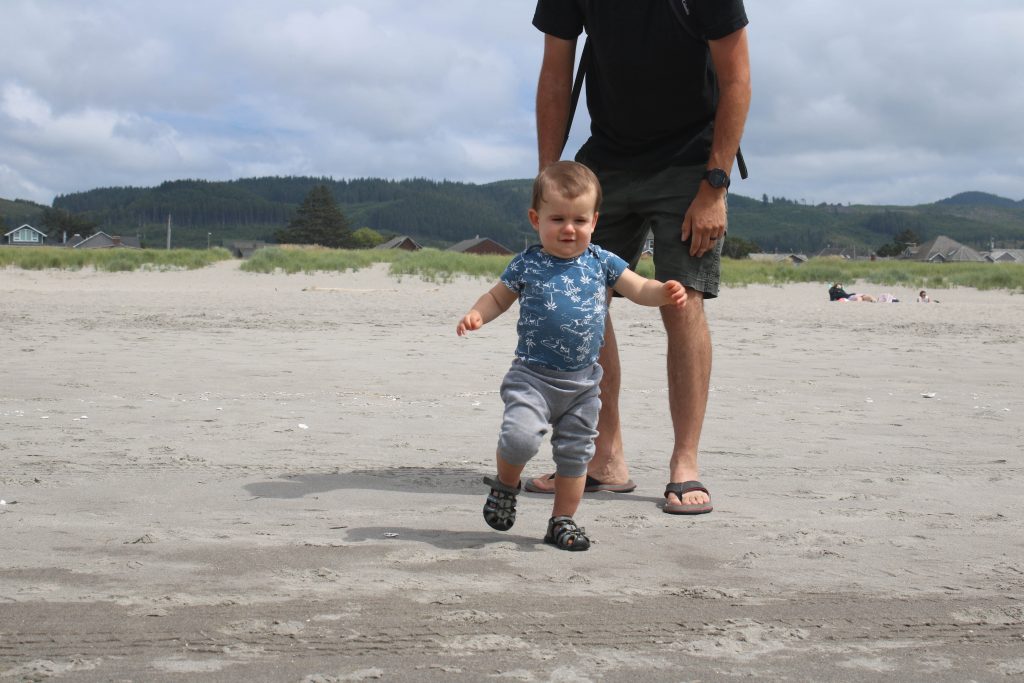 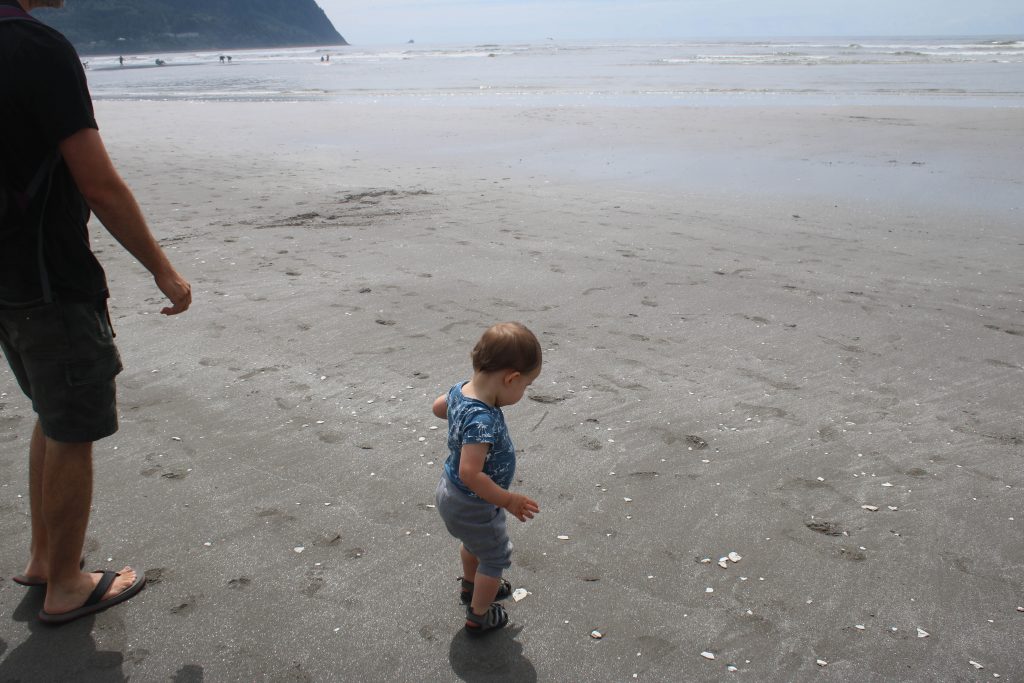 It was the first time Logan has ever been to the beach, or seen sand! We had no idea how it was going to go. It had the potential to be awful but we got lucky. Logan loved it! He immediately wanted down and wanted to run on the sand. He squatted down to pick up shells and tried to eat some of them (of course!) and then he got distracted by everything else. 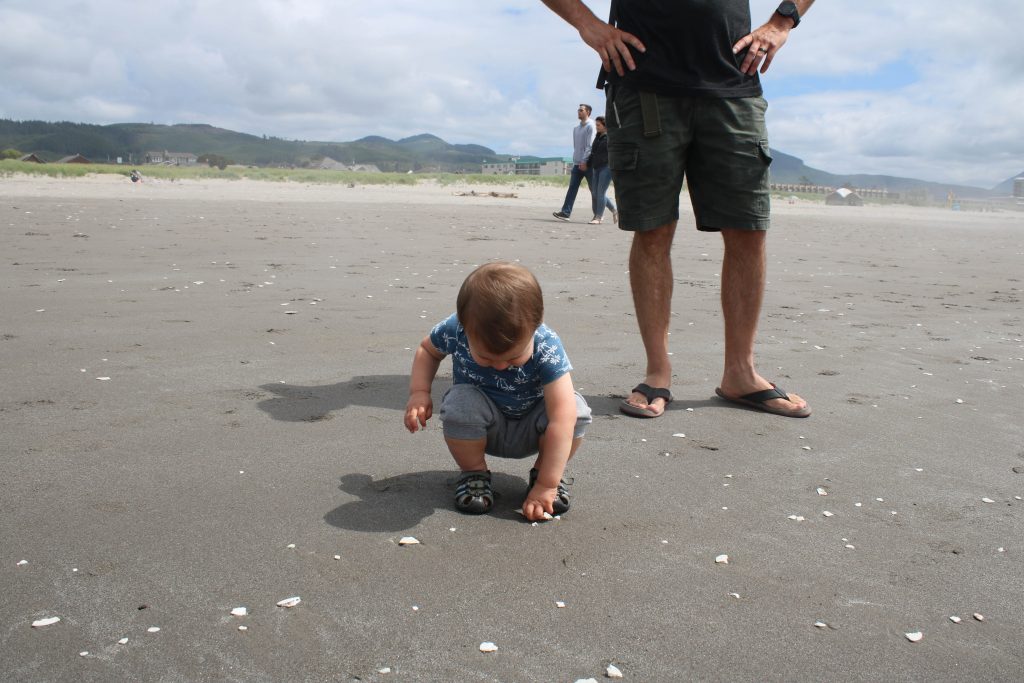 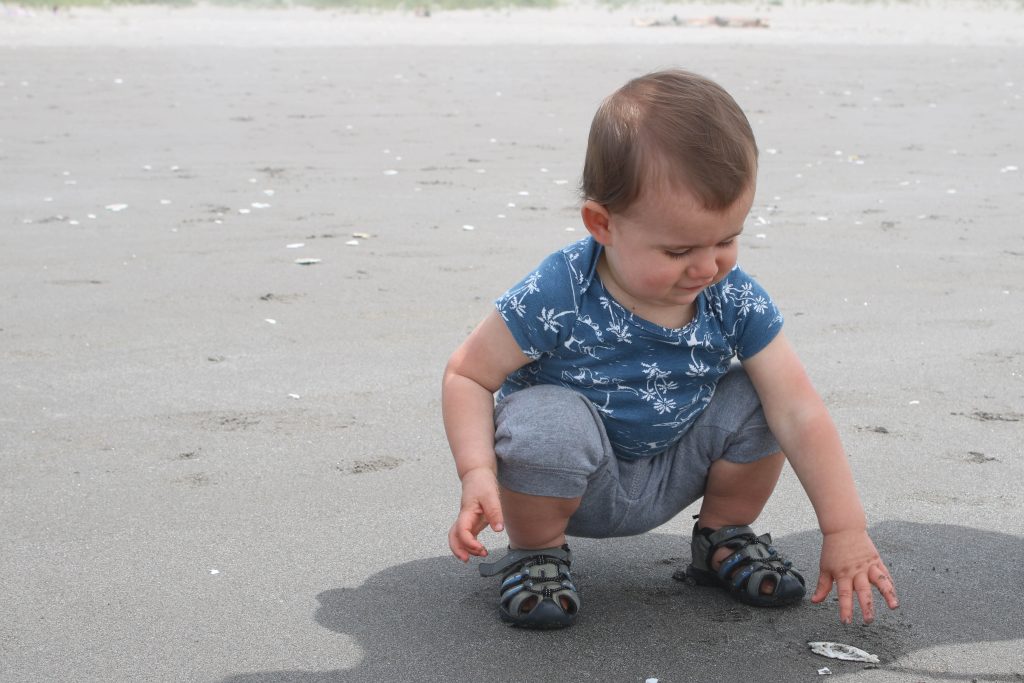 The bucket and shovel I got for $1.50 a few weeks ago was the best money ever spent: 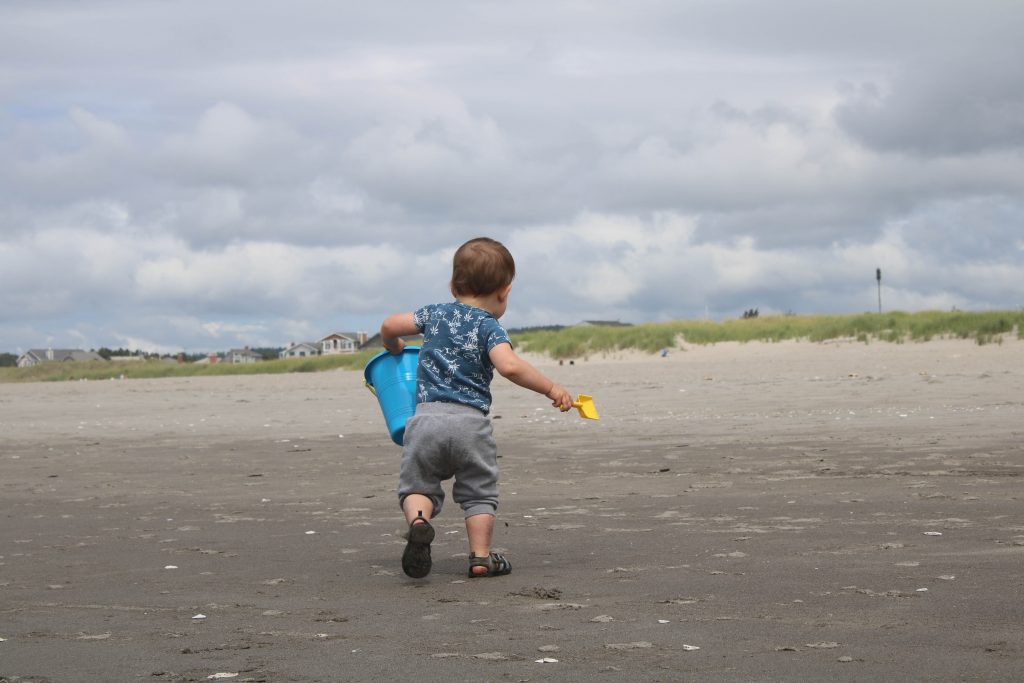 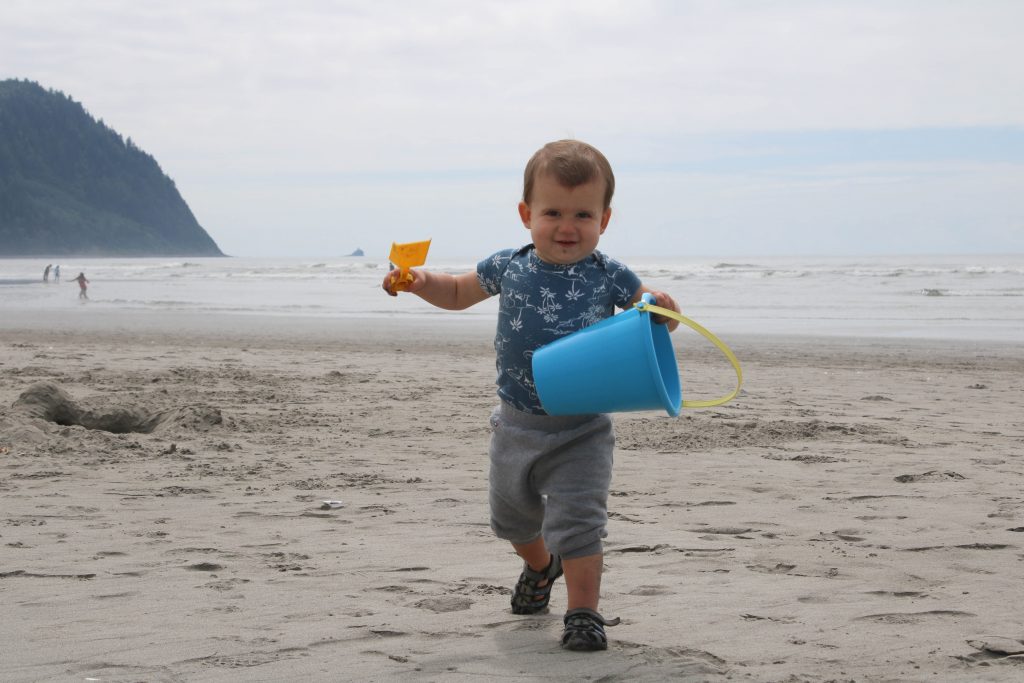 He loved that bucket. I posted some videos on my Instagram if you want to check it out. 🙂 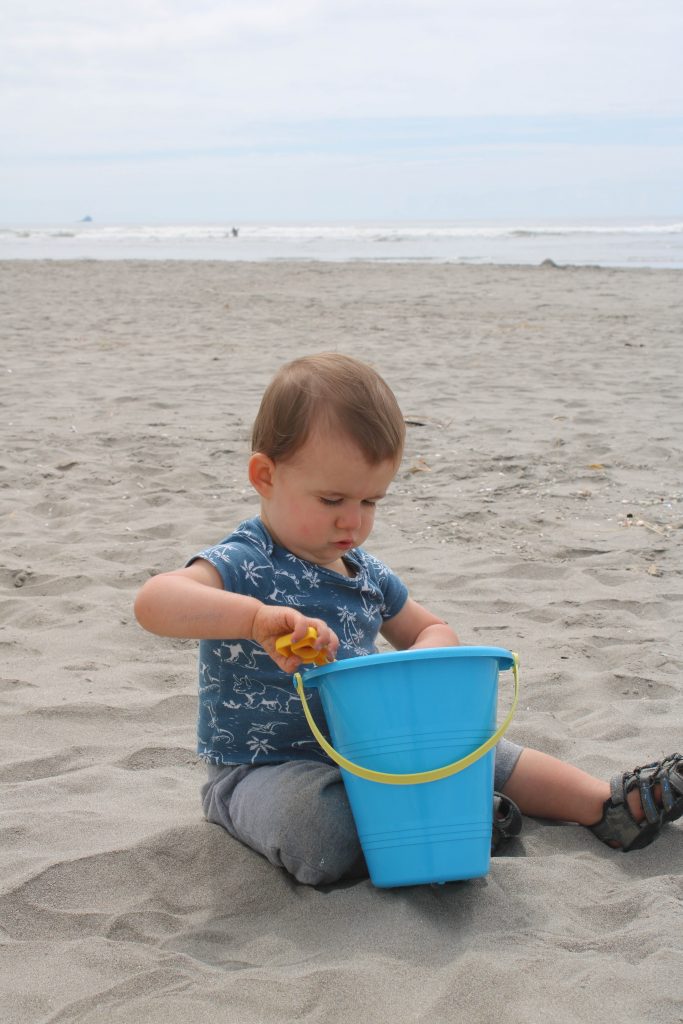 It was such a fabulous day. So perfect. Logan loved the beach. He loved running on the sand and didn’t struggle walking in the sand like we thought he would. He had a great time and it was so fun to watch him experience the beach for the first time. We will definitely be back. Soon, I hope. 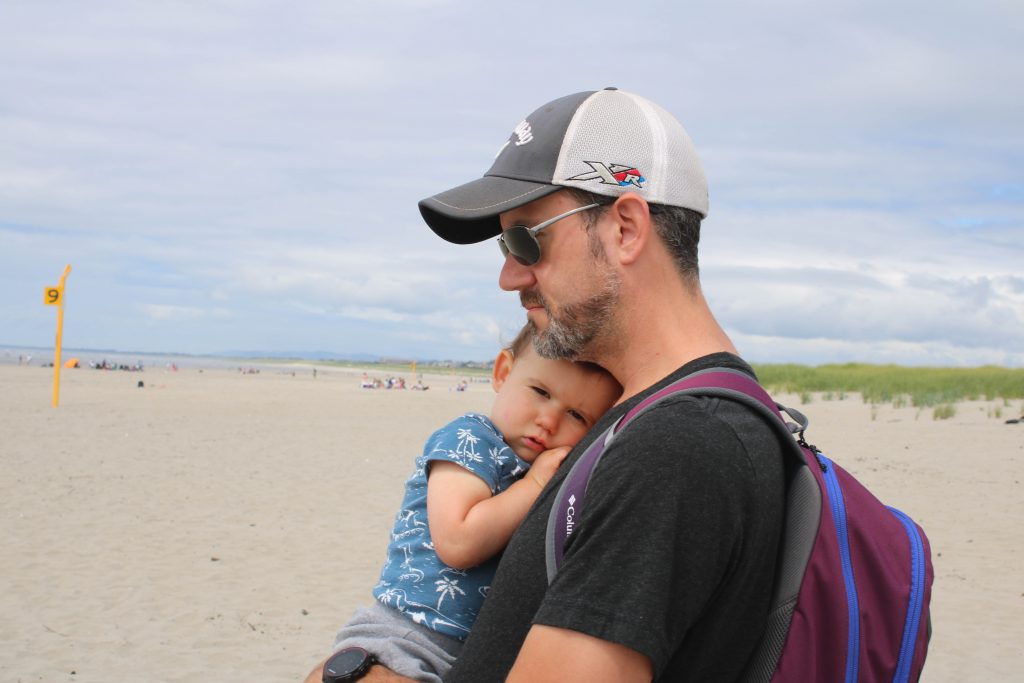 It was a little after 3pm at this point and Little Man was getting tired. He threw a bit of a tantrum when it was time to go. He didn’t want to leave the beach! But we had to drive back to Portland. Logan fell asleep in the car immediately and we had an easy drive home. Home for a bath to get the sand off the little man, dinner, then bedtime. And Michael and I got to enjoy some dinner, a beer and House of Cards. 🙂