I’ve been looking forward to this week for months! I took some vacation time (Thursday and Friday) to have “me time” and then ended up getting sick over the weekend and was home on the couch Monday. So my work week consisted of Tuesday! That was it!

I had a few things planned for my time off. Michael had to work, which was a bummer, but at least he got the 4th off. We got to do some fun stuff. (And he kindly put together our new bistro set that I bought for us to spend time together in the evenings this summer.) It looks so cute: 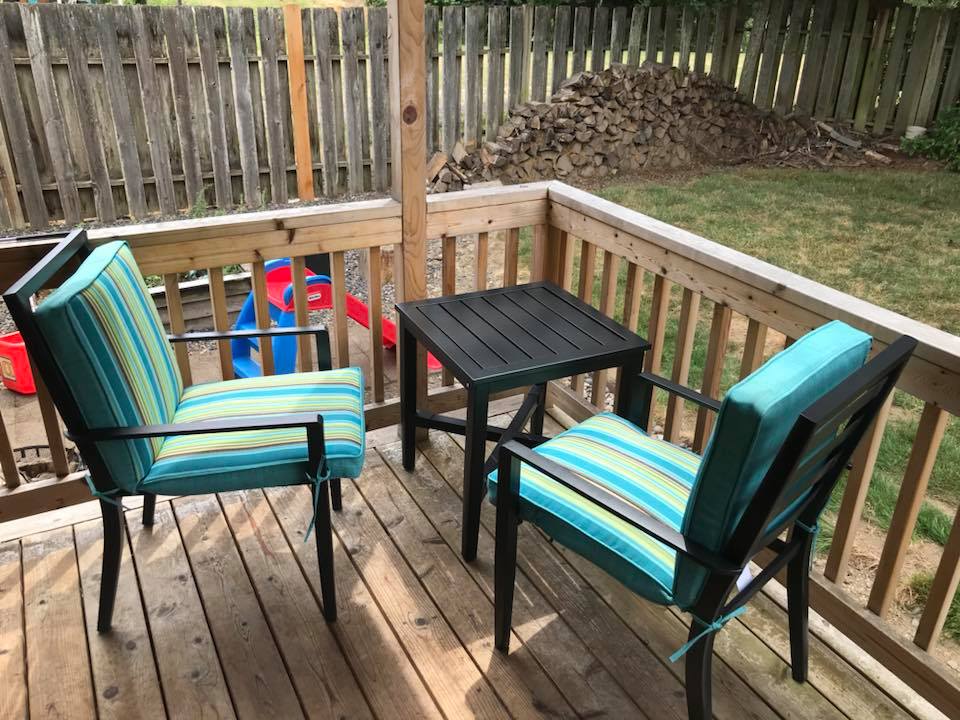 For the 4th of July we spent the day pretty low-key. Logan and I got up early and had breakfast then went for a walk/jog on part of the neighborhood loop we used to do a lot (and stopped for coffee and lottery tickets!). We did about 3.5 miles and he started getting fidgety in the stroller around mile 2.5! 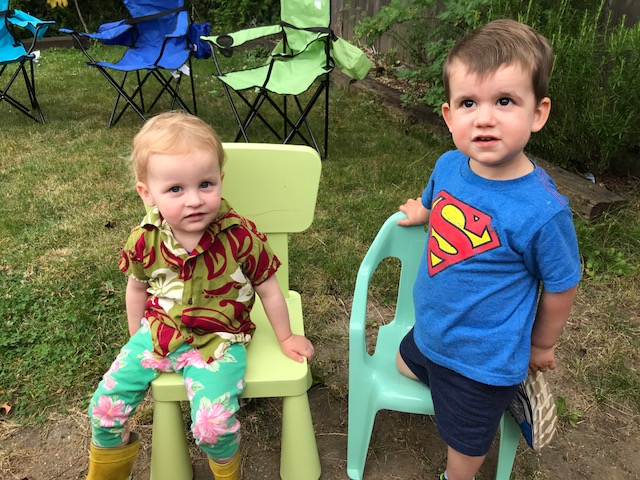 The rest of the day was easy and quiet. Then we went to a friend’s house for a holiday BBQ. Logan’s BFF was there and they played so hard. Logan was covered in dirt, bubbles, chocolate and god knows what. 😉

Our friends have a nice little enclosed yard in inner SE Portland, perfect location for all things Portland. And the yard was perfect for a little BBQ. They did burgers, chicken, sausages, veggies and veggie burgers. People brought sides. I made a Greek Orzo salad that turned out really yummy.

Someone made a blueberry pie and homemade cupcakes (both were delicious and decadent!). It was a bit crazy with two 2 year-olds just running wild, but…that’s what summer is for, right?

Only a few minor meltdowns…it was way past Logan’s bed time so we headed home. Long before any fireworks really started (but I did bring the pop things that you step on and they pop–the kiddos LOVED those).

I still wasn’t 100% from my gnarly cold so It was ok with me to go home before the fireworks. Way different than the old days when our neighborhood would get the GOOD stuff (aka illegal fireworks from Washington) and it would be a show late into the night. I was in bed at my normal bedtime this year, with my book. PARTY ANIMALS!

I almost called this post “Quivering Quads” because my legs felt like Jell-o after our 4th of July hike! Michael and I ate a normal breakfast, picked up a foot long sandwich to share from Subway, and hit the road. Our destination was The Gorge. Remember a few months ago we attempted Devil’s Rest and turned around? Well we were determined to do it this time. 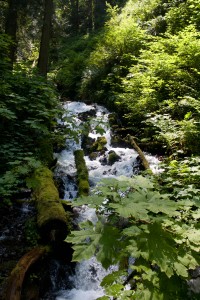 The place was packed with fair-weather hikers out enjoying their sunny holiday. The weather was beautiful! Sunny, not a cloud in the sky and about 70 degrees. Michael and I blazed a trail up Wahkeena Falls. I was telling him about the awful news stories I’ve read lately about hikers falling and dying on Eagle Creek. Michael said that it was most likely inexperienced hikers doing dumb things (which we see SO much on our hikes). My argument was that Eagle Creek is a treacherous, dangerous hike and they need to install railings at the worst parts of the trail. 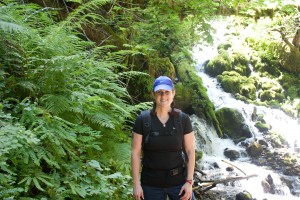 At exactly that moment we were having a conversation about the dangers of hiking, a guy in front of me on the trail stopped, tried to turn around and lost his balance. He was starting to fall off the side of the trail when I instinctively grabbed his arm and pulled him back up to the trail. It was total reflex (thank you weight lifting for giving me the upper body strength to grab a guy 3x bigger than me!!) and after the fact I realized it was probably dumb of me to grab him–he could have pulled me down with him! 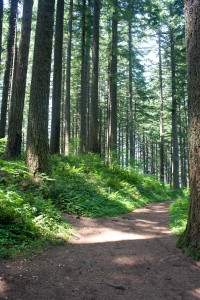 He was fine and Michael and I continued on past the waterfalls and the throngs of day hikers. We set a really good pace up the trail. There were a lot of beautiful wild flowers along the trail. This one in particular was gorgeous and I was told by another hiker it’s Columbine. 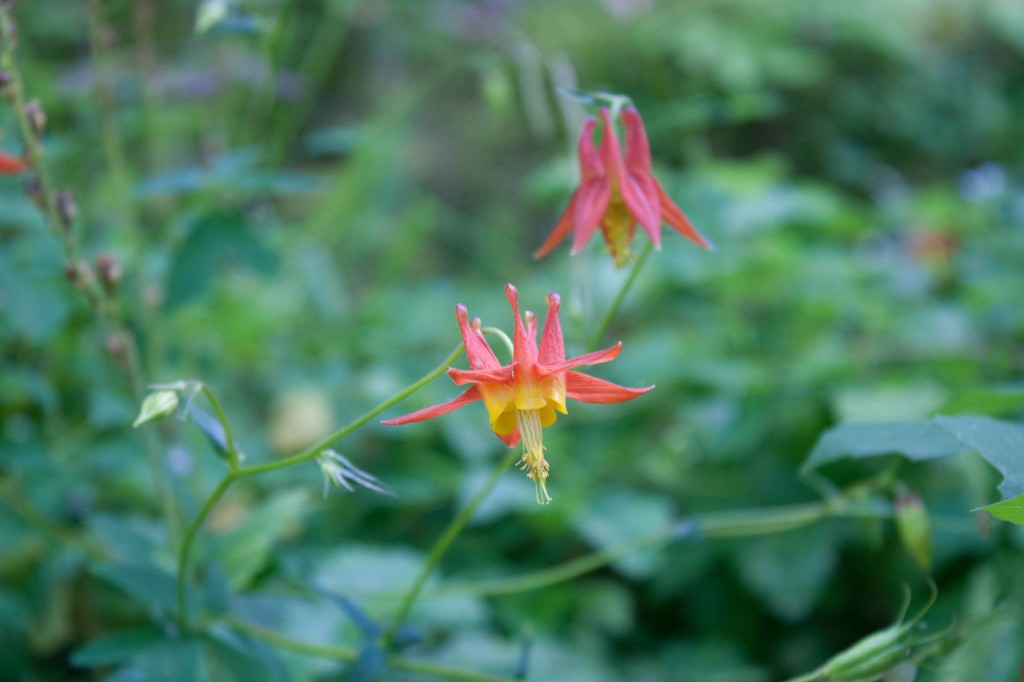 The washed out part of the trail that we were on last time was still washed out but had been trampled on enough to make it a bit easier to traverse. It was still uncomfortable grasping onto the side of loose, wet soil on the hillside to get passed it. 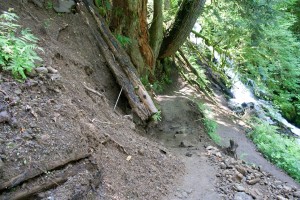 We got to that fork in the road where you can take the Vista Point Trail, Devil’s Rest or Larch Mountain and we sat for lunch. I devoured my half of the Subway sandwich, famished after hiking for nearly 2 hours. We shared a Gatorade and then headed up Devil’s Rest. 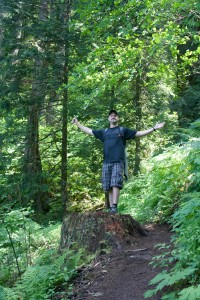 I saw a lot of people attempting Devil’s Rest this time. I kid you not, most of the trail is straight up. I did not get a picture that does the elevation justice. Trust me. It was brutal. 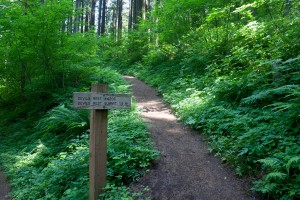 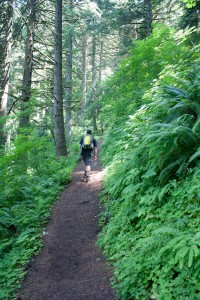 And I kept thinking….How the HELL did I do this hike 25 pounds heavier??!?! It’s a strenuous part of the hike that will make your hamstrings, calves and quads scream for mercy. We stopped to rest at some of the scenic lookout points. 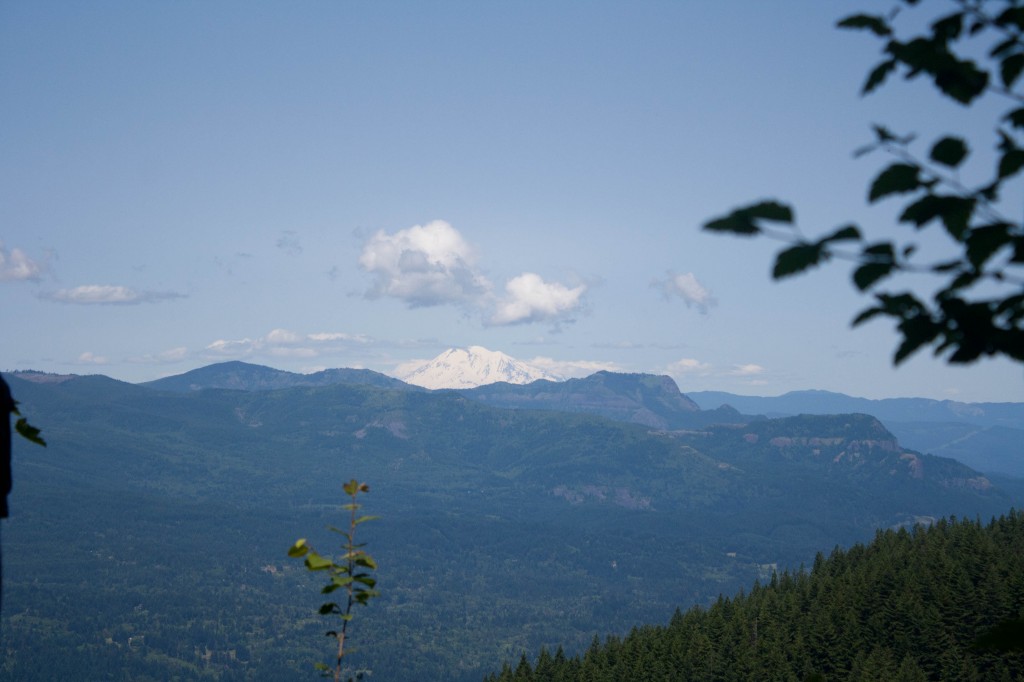 I believe that is Mount Adams in the distance, across the Columbia River in Washington. We were THAT high up on the hike! There were views of the Gorge, the trees below and blue, blue sky. It was worth the knee-creaking it took to get up there.

It got to the point where it was feeling like it was the Never-Ending-Hike. We were both getting tired but at least we’d finally done Devil’s Rest together! We turned around for the brutally difficult downhill climb. I was worried about my knees. They were starting to ache a bit and all I wanted was to be back to the car. 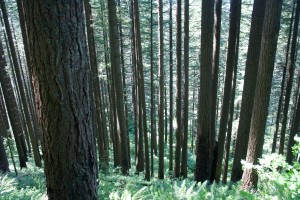 Michael and I tromped down the trail and then he turned to me and said, “Did we go this way? I don’t even remember this part of the trail because it was so long ago.” Truth! It was becoming all a blur. 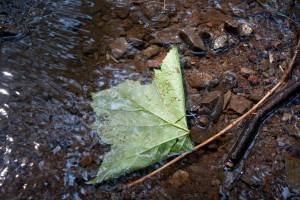 We finally made it down to the trailhead. We were both tired, sweaty and my thighs were jiggling like Jell-o. Ouch ouch ouch. It turned out to be the longest hike we’ve ever done at over 9 miles!!! Holy cow. It was a “dog bone loop” (we learned that term the hard way) with an elevation climb of 2300 feet.

Good for Kids: Iffy. There are a few parts of the trail that are dangerous but for the most part it’s ok for kids.
Good for Dogs: Probably ok. Leash recommended because there are a lot of dogs there.
Cost: Zero. Parking lot fills up fast, get there early.
Activity Level: Strenuous
Scenery: Spectacular.
Verdict: Fantastic hike but you will be sore the next day! 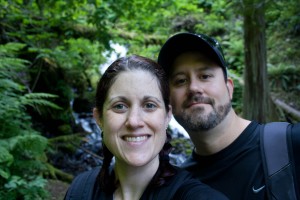 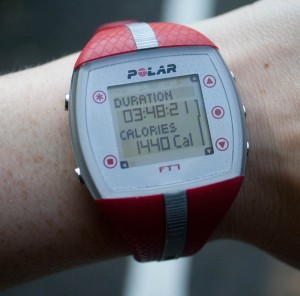 We got home and got ready for dinner. The neighborhood was having a BBQ (and our neighbors may have had Washington  fireworks…ahem…) so I made up a bunch of kale chips with kale from the garden, Michael cracked some beers and we joined the neighborhood party! 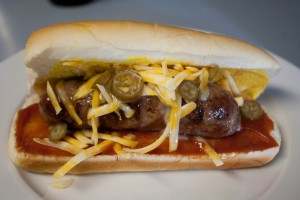 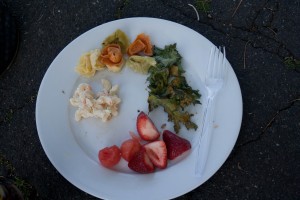 I made good food choices. We had brats and the kale chips and I had a taste of all the other foods at the BBQ (fruit, pasta salad, potato salad, fruit salad). It was such a fun night! I really like our neighborhood and the neighbors are super fun to hang out with. I wish we did more block parties than just once a year on the 4th. I might have to suggest it. 🙂 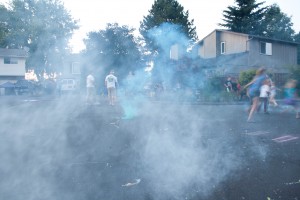 Quick question: do you guys prefer the smaller photos or the larger photos?

QUESTION: Longest hike you’ve ever been on? How was your holiday?