I have to confess, I don’t really like the term “babymoon”. It’s kind of cheesy but…it’s a nice idea. One last holiday as a family of two before becoming a family of three. When we started talking about doing something, I foolishly considered Vegas. I mean, we both LOVE Vegas and this could be the last opportunity to go before the baby…I can go to Vegas and not drink. It’s not about the drinking for me; I love the atmosphere, the food, the glitz, the trashiness, the gambling…But in the end we decided not to spend the time/money going to Vegas and I’m glad we did. Something a little more low-key was what I wanted by the time the mini-break was upon us and I was glad we decided on the beach.

Even though Bella loves the beach we decided not to take her with us this time. We wanted something relaxing and about us and the one drawback to bringing Bella is that we can’t leave her alone in hotel rooms (she’ll cry) so it makes it difficult going to restaurants and such. Besides, Bella needed some puppy play time! So she spent the weekend with her Auntie Amy (the dog walker) and her boyfriend Raja. 😀 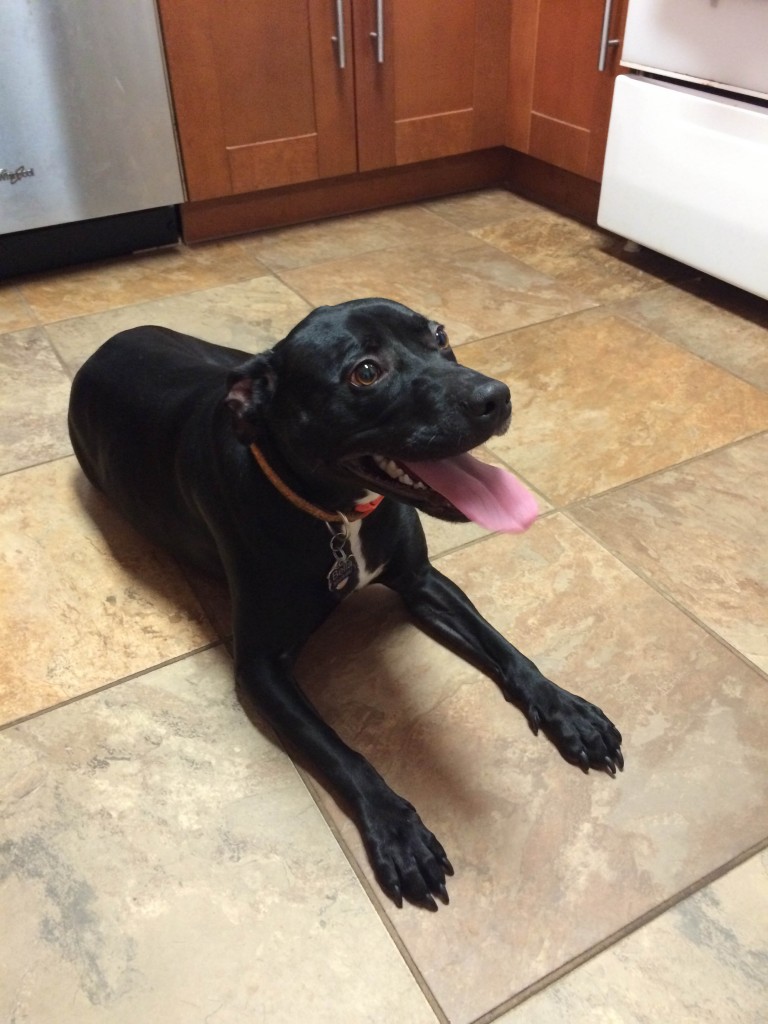 You think she was excited to go?? 😉

We decided to go to Pacific City, near Lincoln City. Pacific City happens to be a place we’ve been before–when Michael and I biked Reach the Beach! It was kind of a blast from the past to drive part of the route we biked! And to see the monster hill we biked up (and where I threw my bike chain!). We stayed at The Inn at Cape Kiwanda. Michael got a Groupon for it, which was nice. 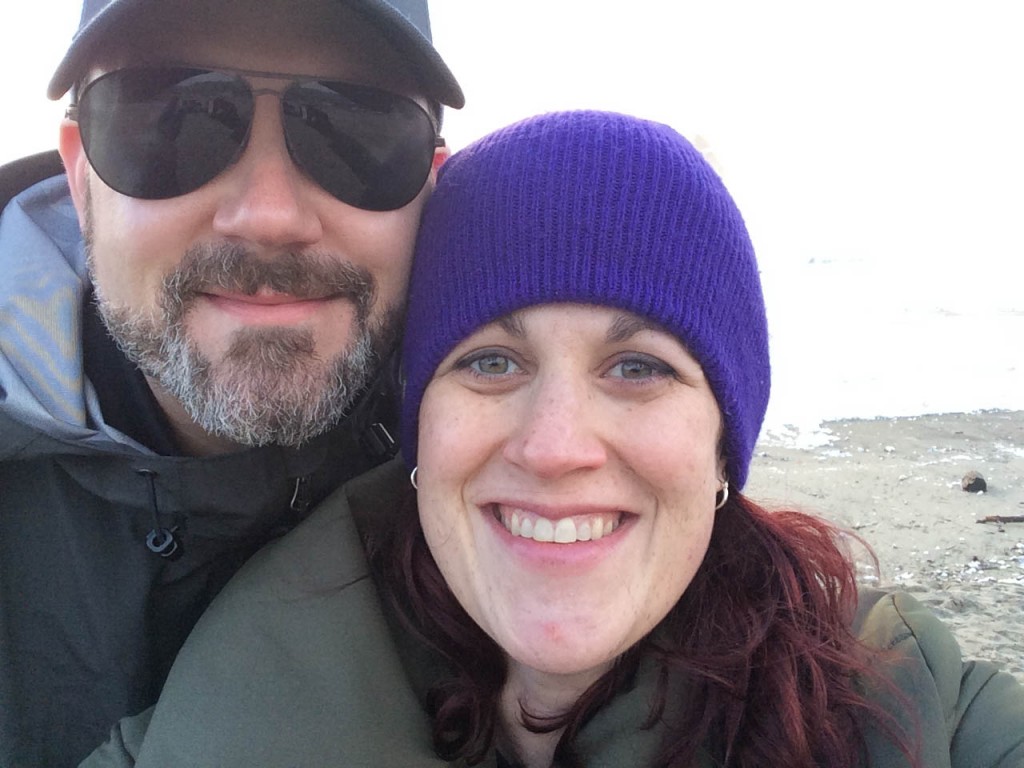 Saturday morning I worked out, we packed and ate lunch and Amy picked up Bella. We were on the beach by mid-afternoon. There was a nice break in the rain so we had a chance to go for a walk on the beach. It wasn’t raining but it was stormy. The waves were huge and the tide was coming in. 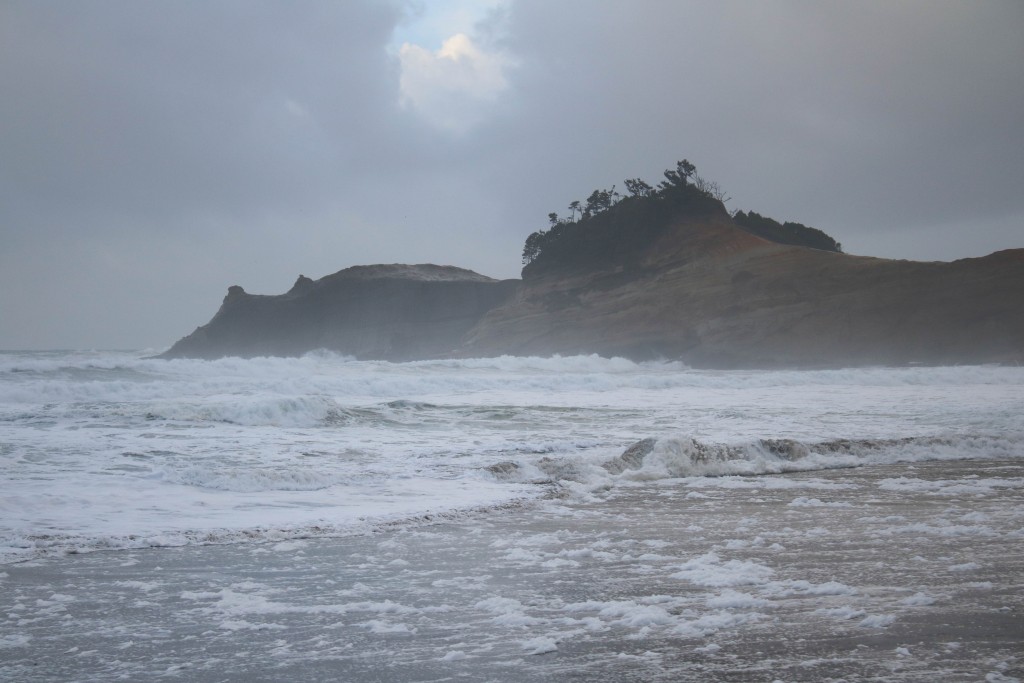 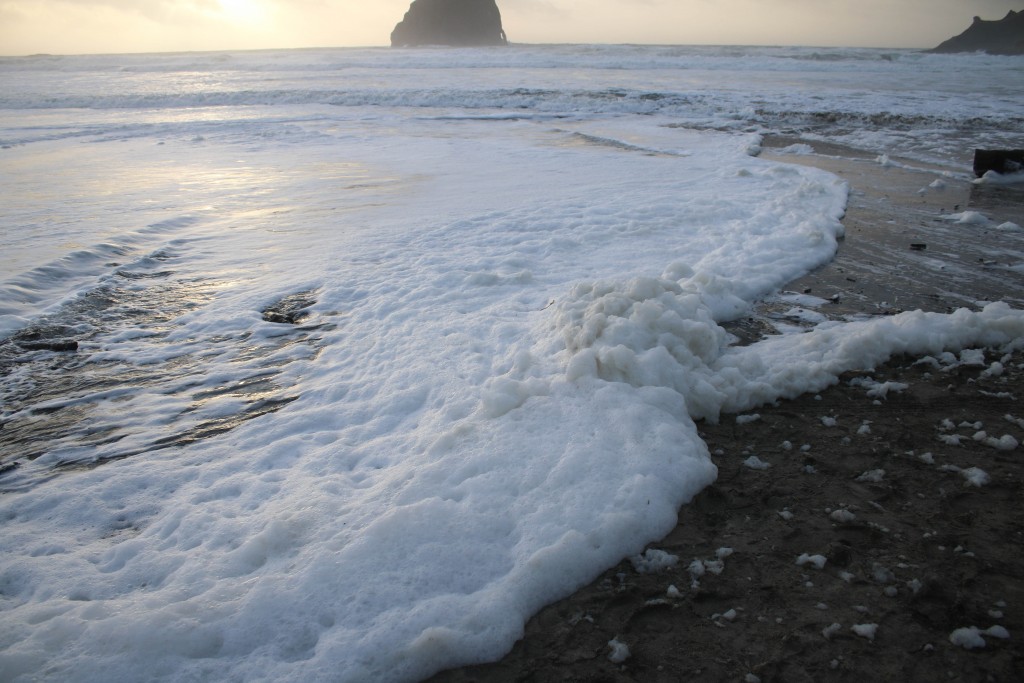 There was a lot of froth on the shoreline, too. It was cool to see. While we were walking there was a break in the clouds and the sun came out just a little bit. Sure it would have been nice to have a perfect weather weekend but even stormy weekends at the beach are fun. 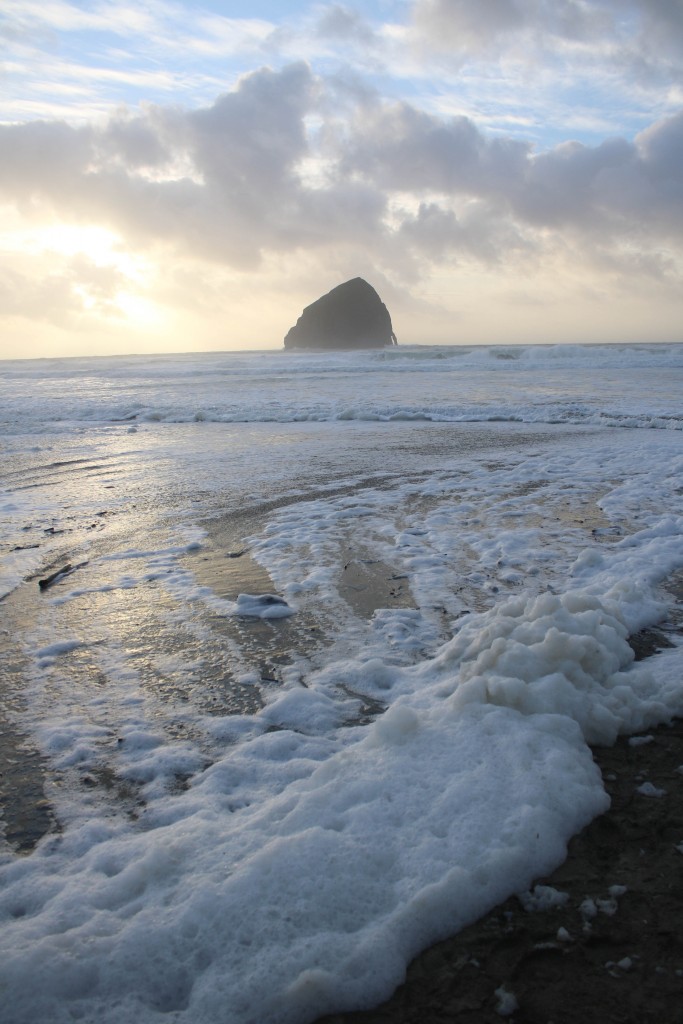 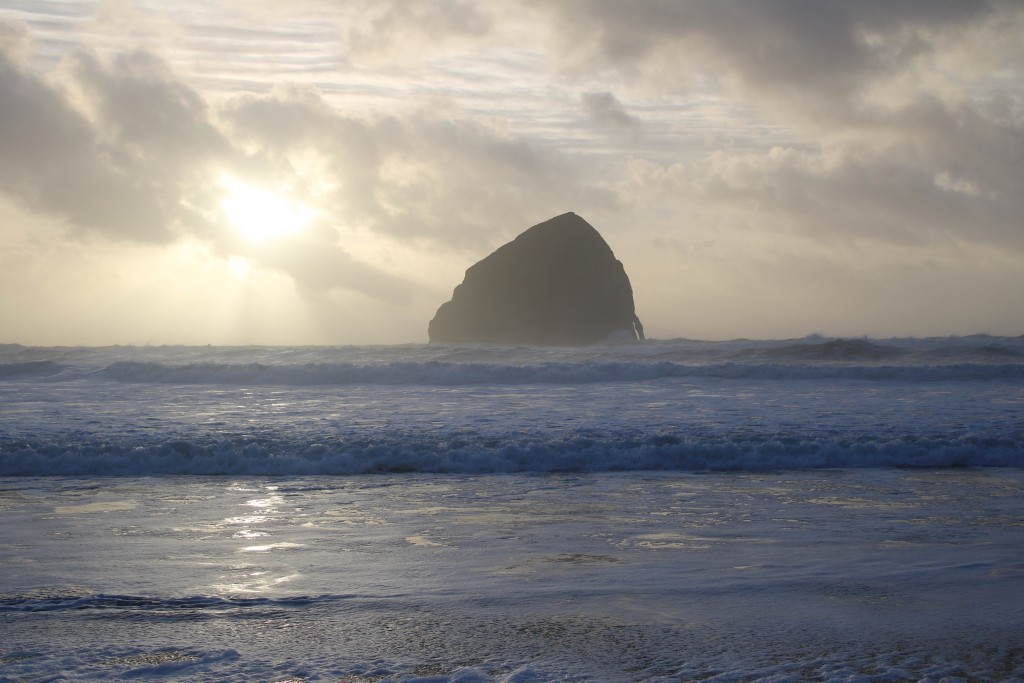 One odd thing–there were bunnies all over the place at the hotel! They were so cute. And you could buy bunny food for 50 cents and feed them (which I didn’t). I guess that’s why there’s so many bunnies hopping around the yard. 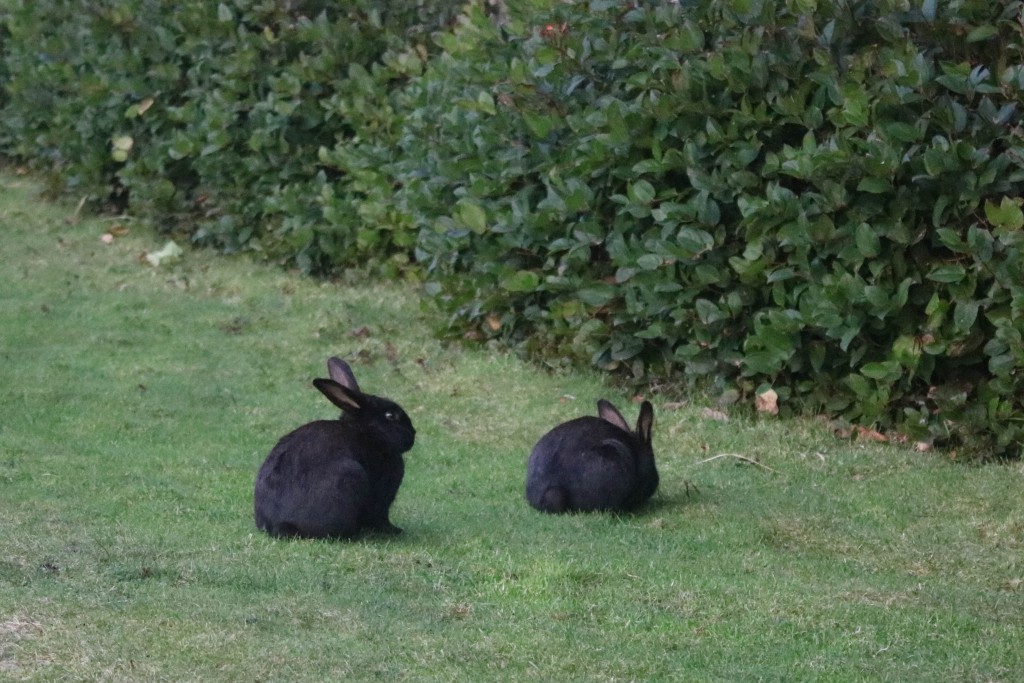 Our room was on the top floor and had a deck and view of the ocean across the street. We had the deck door open the entire weekend so we could hear the ocean. It was nice. The hotel had a “happy hour” on Friday and Saturday nights. We went down for a little bit. Michael had some complimentary beer, I got sparkling cider and they had a cheese plate out where I ate way too much smoked Gouda (it was so good). 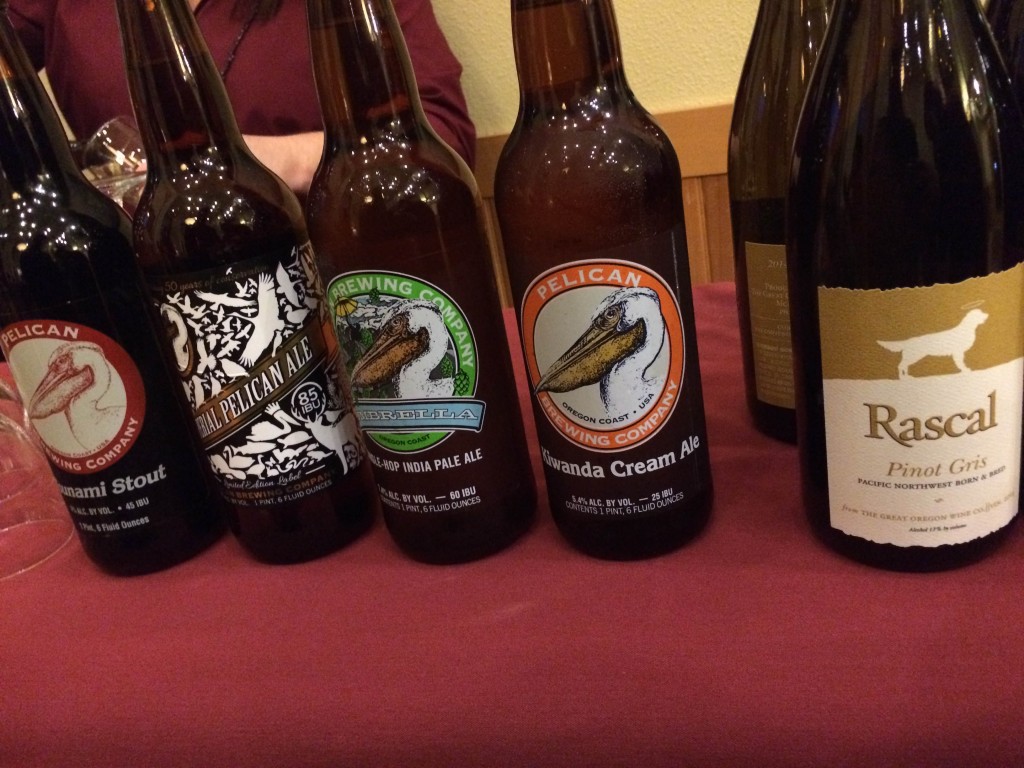 Then we walked across the street to the Pelican Pub & Brewery for dinner. I was craving fish and chips and that’s exactly what I got! And I have to say it was one of the better fish and chips I’ve ever had. Perfectly crispy, great flavor, beer battered fries…it was absolutely excellent! Michael got the fish tacos. It came with a southwest quinoa salad that I had a bite of and it was really tasty. 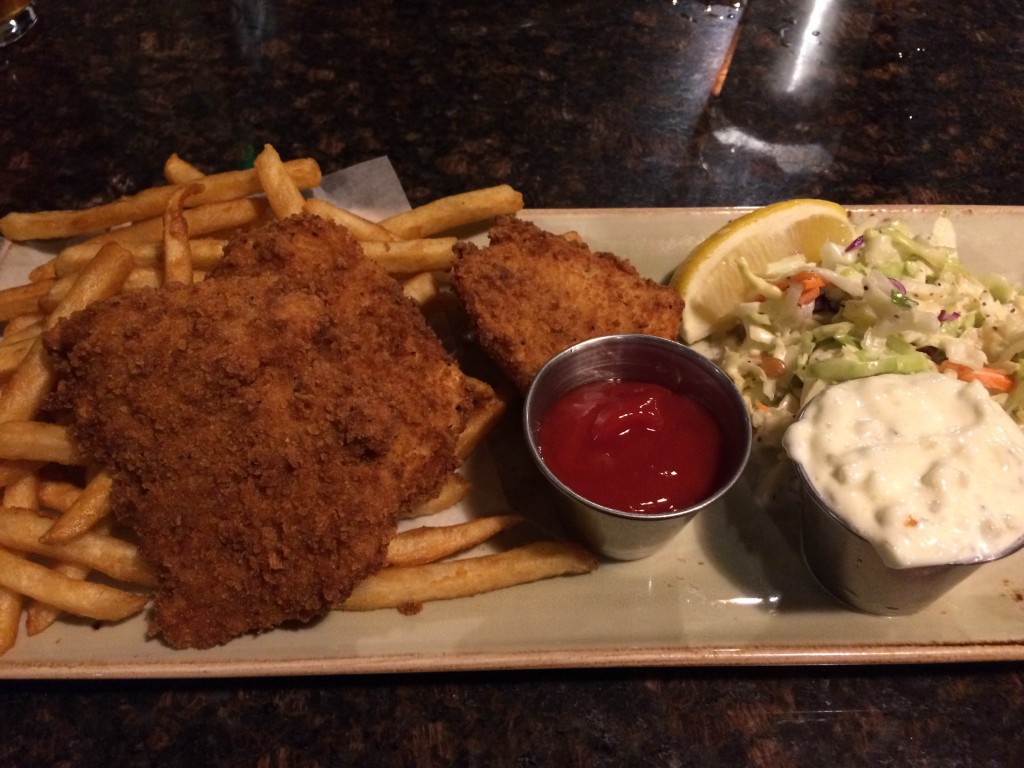 Part of the Groupon gave us a credit for dinner and a free beer for Michael. He got the double IPA (which looked and smelled amazing…cannot wait to have my own soon!). 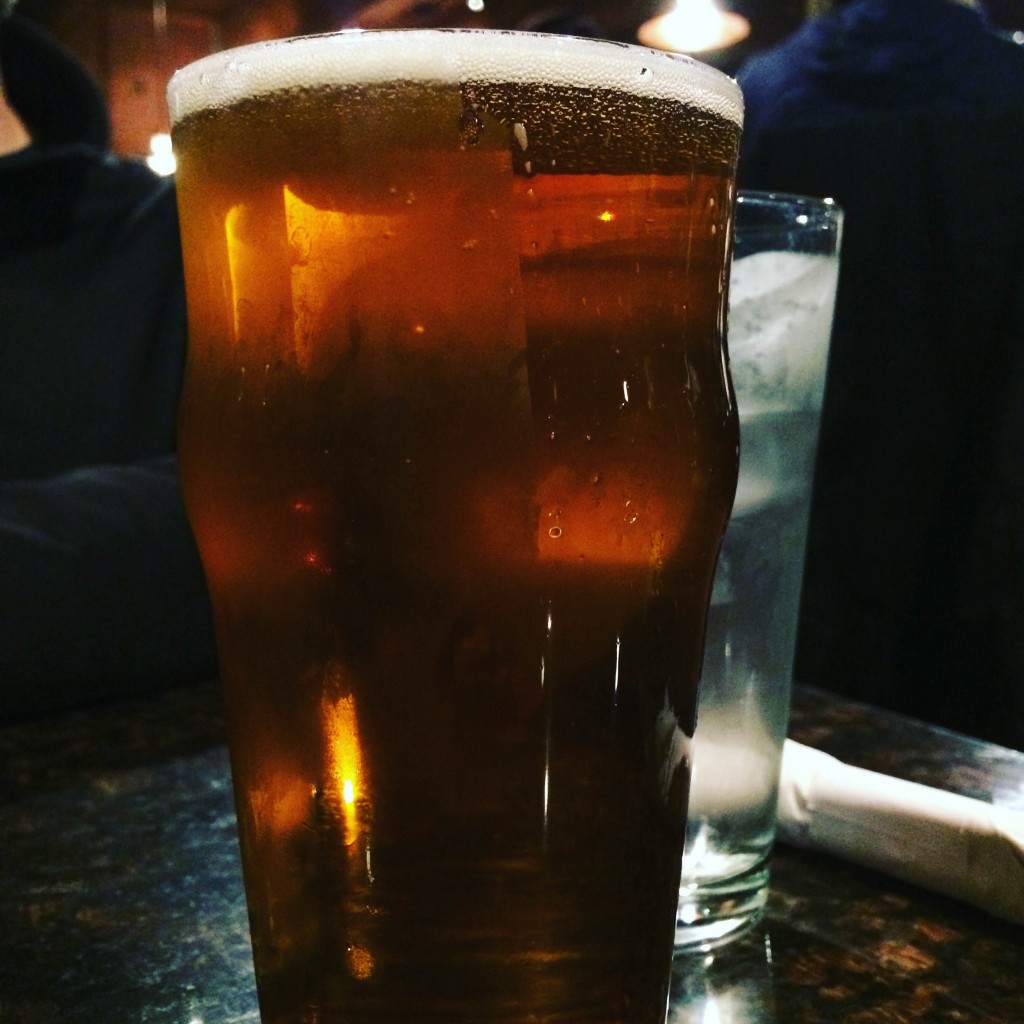 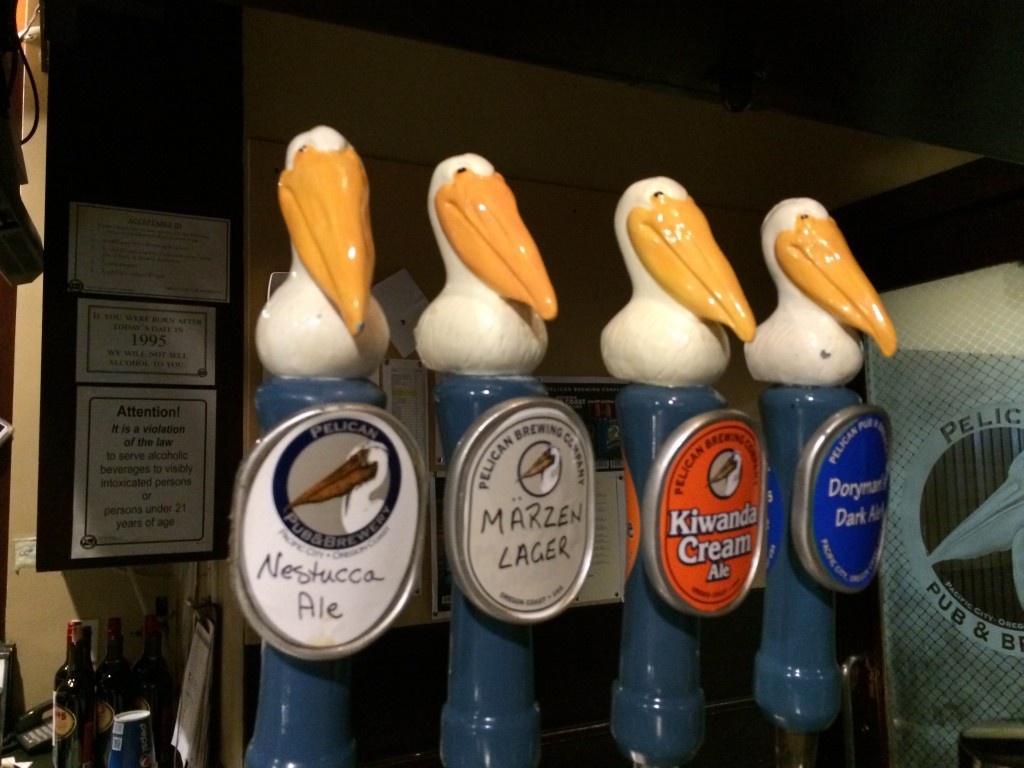 The place was packed but the food came out really quickly. Dinner was excellent. We got dessert to go. It was a key lime mojito torte. We hung out in the hotel room and ate the cheesecake in bed. PERFECT.  😀 It was so so good. 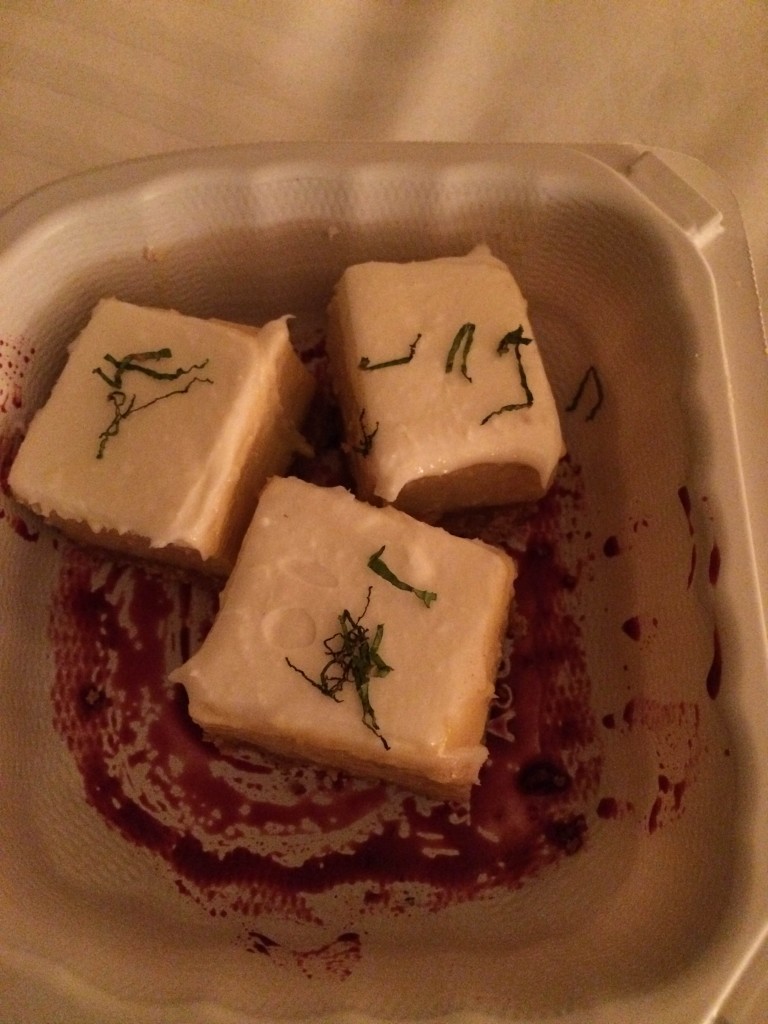 Falling asleep to the sounds of ocean waves and rain is most excellent.

Sunday morning we went to a local hole-in-the-wall called Village Coffee Shoppe. It was an odd, quirky little place. A mom and pop type cafe, small with limited seating and a simple and cheap menu. They definitely liked the decorations and the place looked like Valentine’s Day had exploded in there! They even had a sign on the wall counting down the days until Christmas….LOL 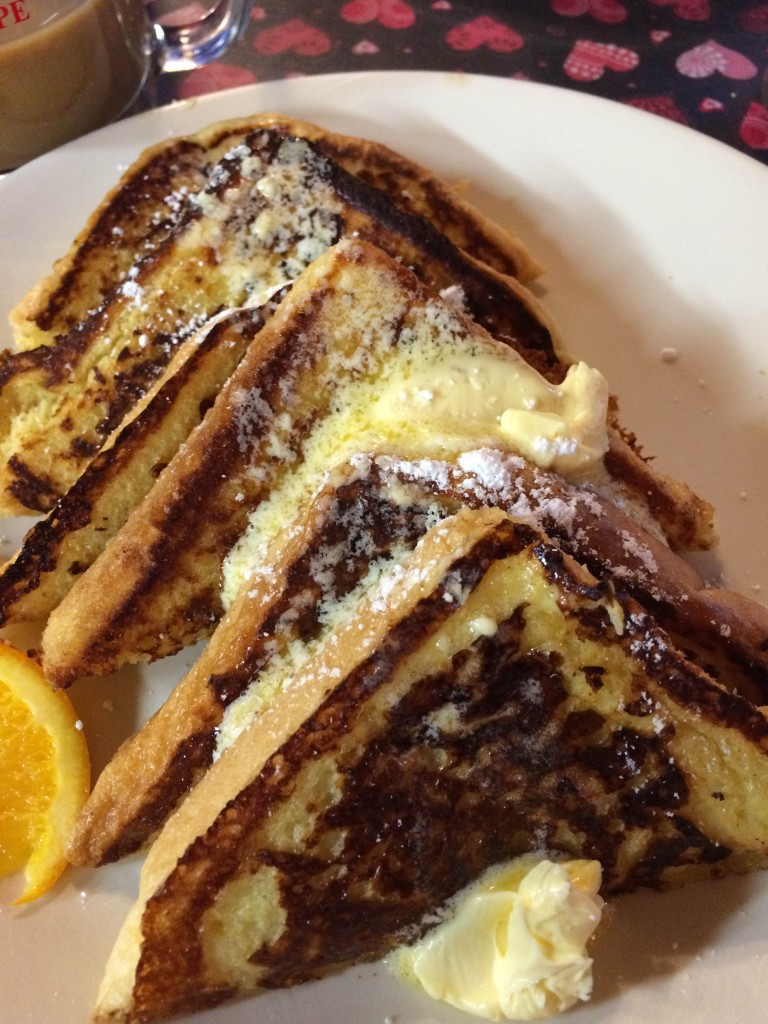 Michael got a sausage omelette and I got the french toast. The french toast was decent. The coffee was really good. After breakfast we went back to the hotel. Michael wanted to watch the Seahawks game and I had intended on working out in the small hotel gym (it had a treadmill, stairmaster and bike). But I sat down in the chair near the deck, listening to the rain and ocean waves and decided to take a nap instead! I’m not the type of person that takes a nap–like ever. Unless I’m sick. But I was suddenly so sleepy. I crawled into bed, Michael kindly took my shoes off (yes I am getting to that stage where I need help with my shoes) and promptly fell asleep for over an hour! 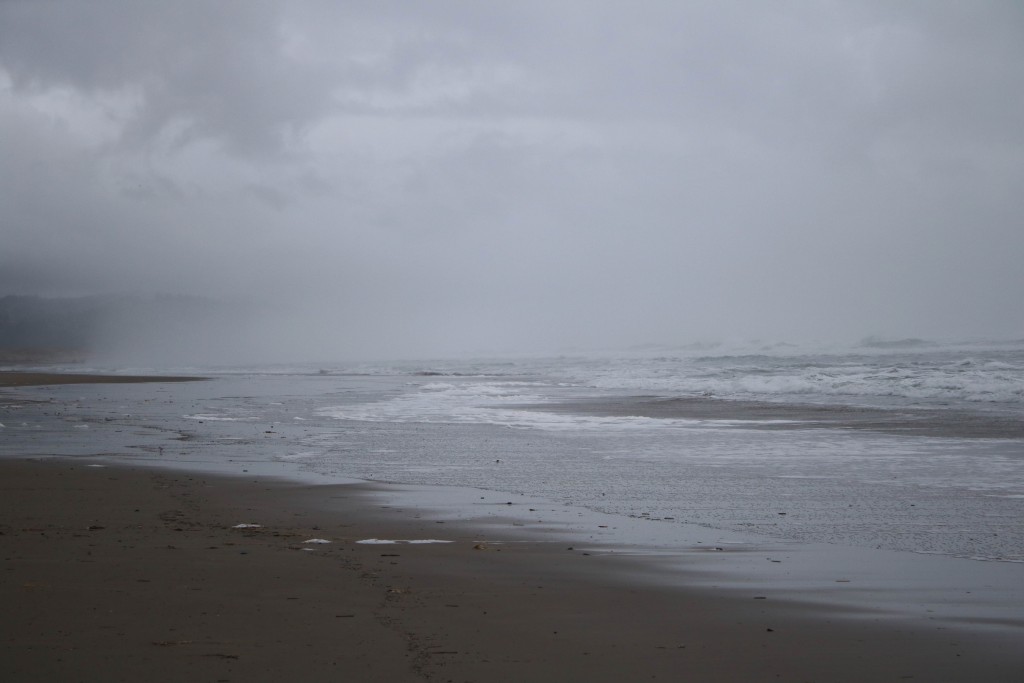 Once I woke up, I was itching to get out of the hotel. There was a break in the rain so I decided to go for a walk on the beach while Michael worked out with his kettlebell and finished watching the football game. It wasn’t too windy and the walk was kind of nice. The beach was really quiet. 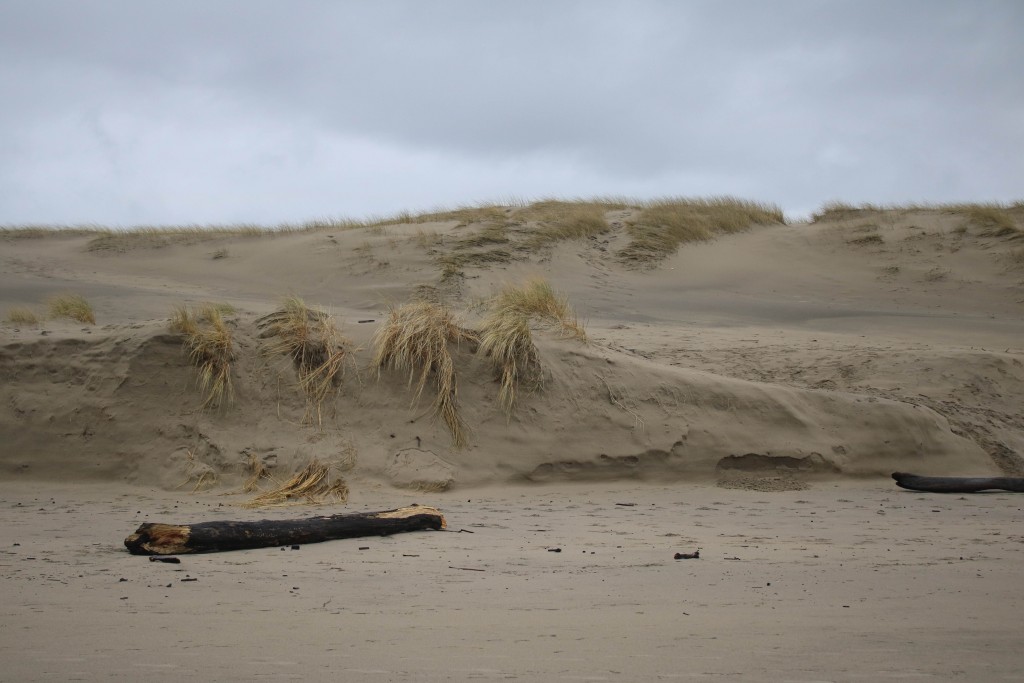 I ended up walking nearly 2.5 miles, went back to the hotel to shower and change and then we drove to Lincoln City. 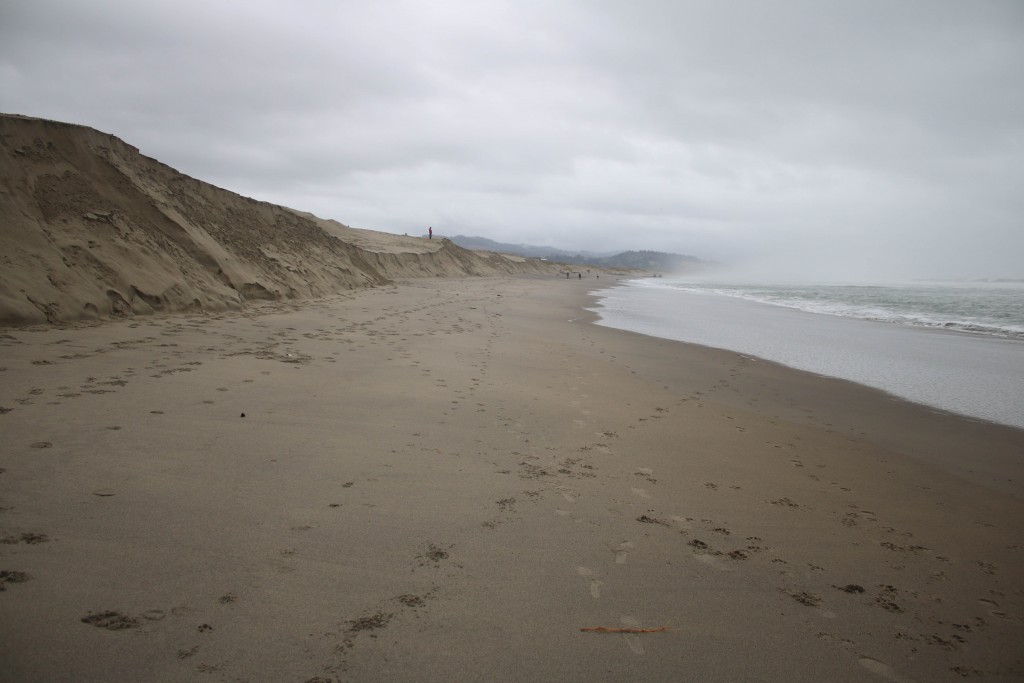 We spent an unlucky 30 minutes at Chinook Winds Casino, then walked around the outlet mall. I got a nursing bra for cheap and ended up buying some really adorable and SUPER CHEAP baby clothes at the Carter’s outlet. Everything was on clearance. We got a few cute outfits and some newborn mittens. By this time we were both getting hungry after skipping lunch so decided to have an early dinner.

Dinner was at Kyllo’s Seafood restaurant in Lincoln City right on the water. We shared the spinach artichoke dip (it was SO good!). 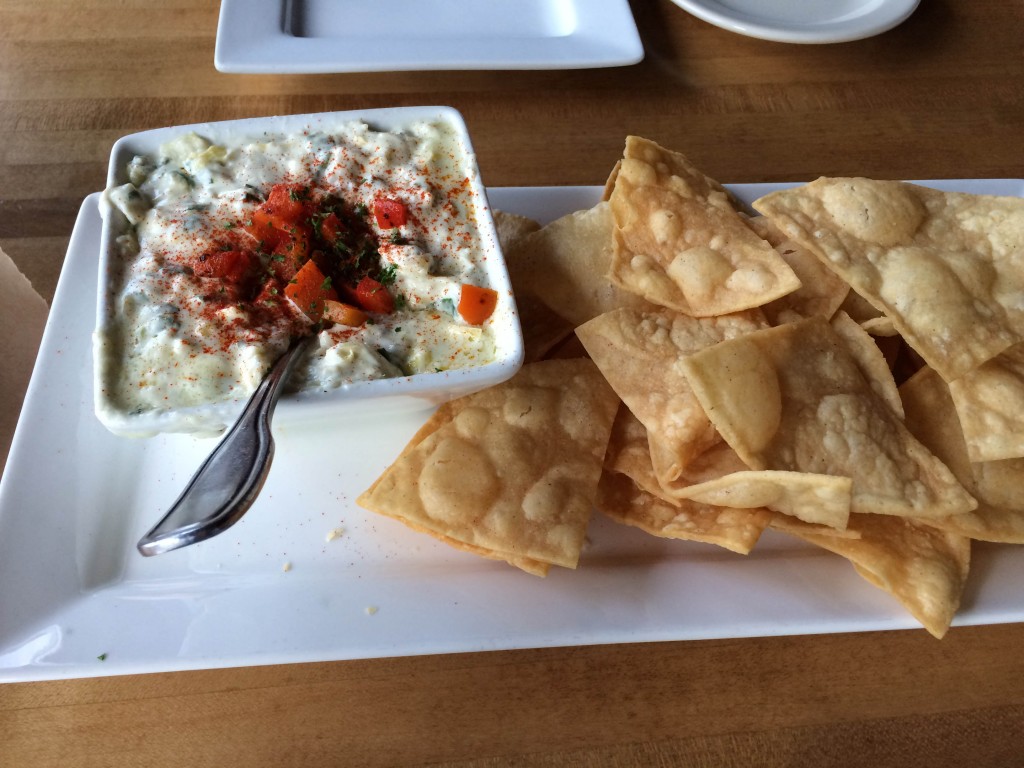 Michael got the blackened salmon Caesar salad and I got the clam chowder with garlic bread. It was so delicious. The entire meal was perfect and just what I’d been craving.

We made it an early evening and relaxed watching a movie in bed in the hotel room. The whole weekend was really relaxed and leisurely and exactly what I wanted. I got this photo from Amy: 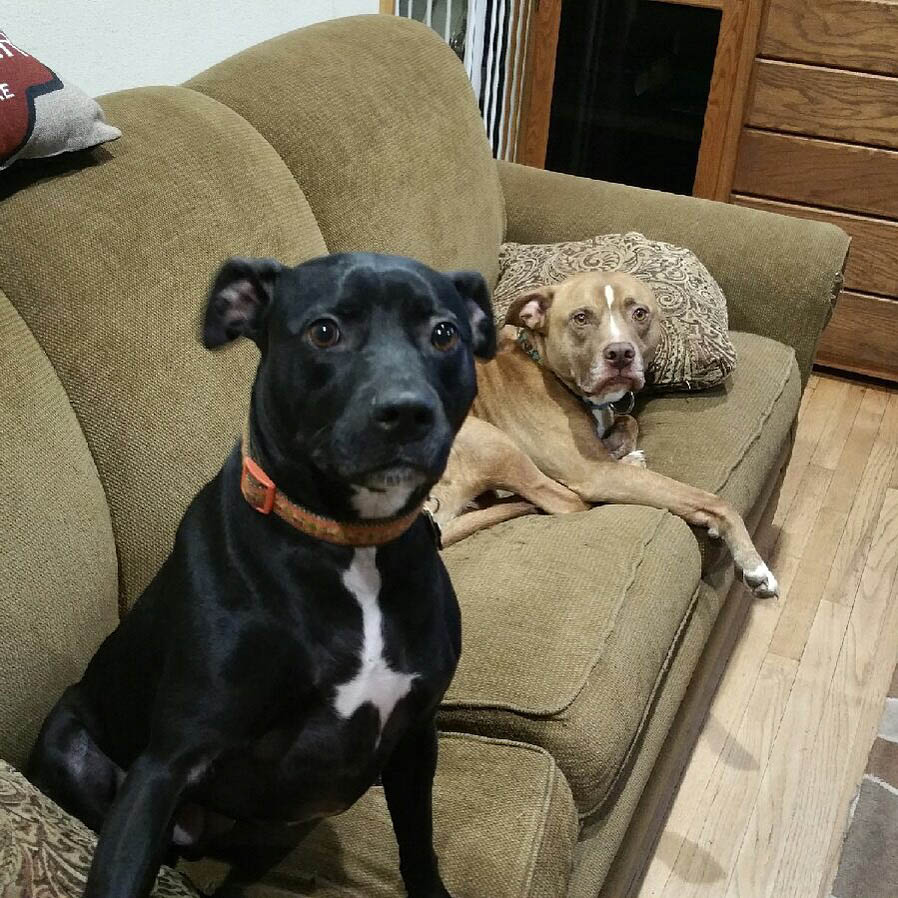 Bella caught with her boyfriend Raja! So cute. It was nice to hear she was having such a fabulous time on her own puppy vacation!