I’m really glad we took a weekend to celebrate us and the upcoming big change in our life. It was a time for being together just the two of us, talking about hopes and fears and thinking about what our little guy will be like. It was a good opportunity to talk about all the things we’re going to have to deal with and make choices about once we have a kid. I think it was a good weekend to reconnect and bond before things change drastically!

The hotel we were staying in had a gas fireplace. It was nice and romantic and cozy. Just laying in bed early in the morning with the ocean waves and the glow of the fireplace…I could have stayed there forever. But I was starting to get hungry and we had things to do and a puppy to get home to! Another photo of Bella’s weekend: 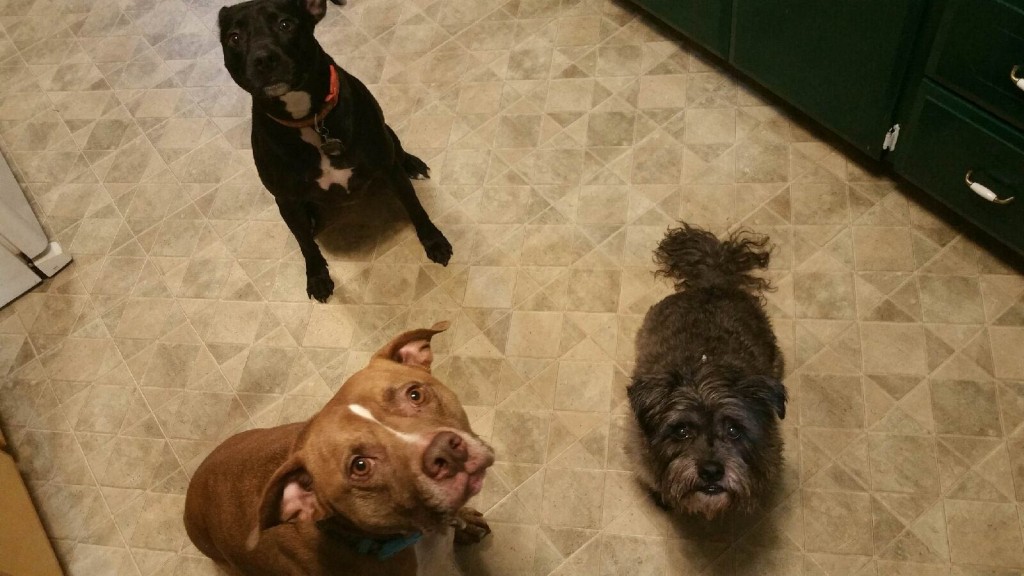 For breakfast we drove to a teeny town called Neskowin, a few miles south of Pacific City just before you get to Lincoln city. The Cafe on Hawk Creek had excellent reviews and I am so glad we went because it turned out to be a nice little gem in the middle of nowhere. Great service, cute place and the food was absolutely excellent. Michael got the huevos rancheros and said they were wonderful. I got the French Toast again. I know, I know. Not the best option but…they sounded so good and I’m really glad I got them because it was one of the best French Toasts I’ve had! 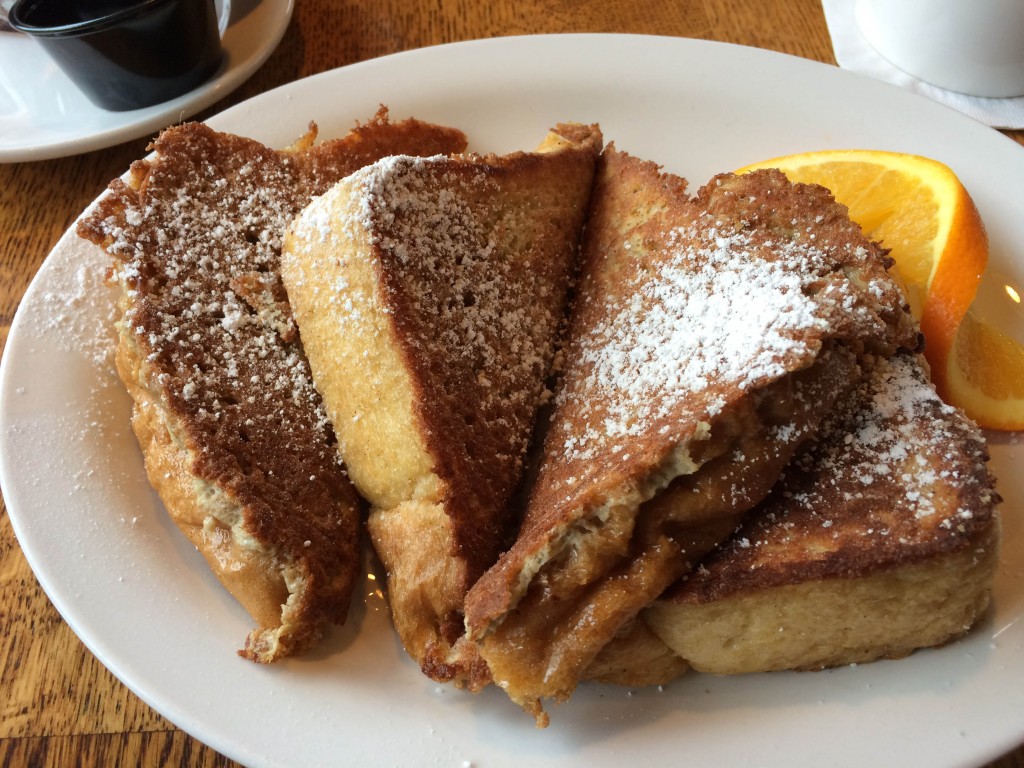 The food was fabulous, the coffee was great. This is definitely a place we’ll go back to for breakfast when we are on the coast. You wouldn’t think a little restaurant in a teeny tiny town would be so wonderful but it was. What a nice find! And we had a visitor watching us while we ate: 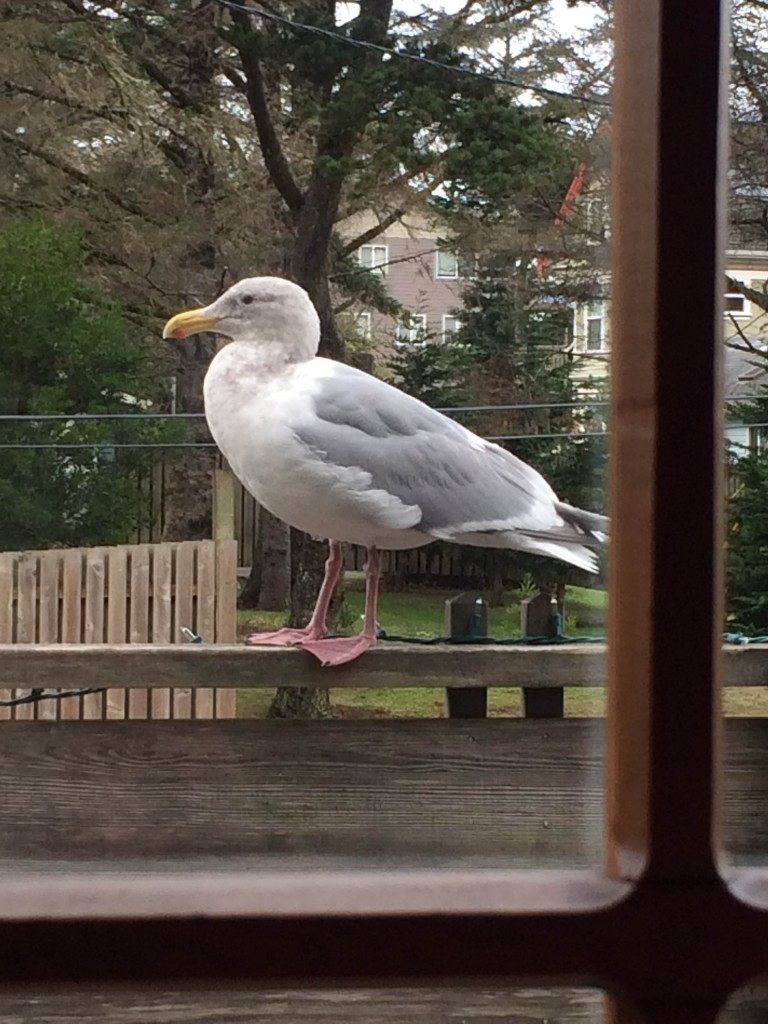 The waitress said there was a walkway to the beach right next to the restaurant so after eating we strolled down the walkway and discovered a wonderfully hidden little beach. 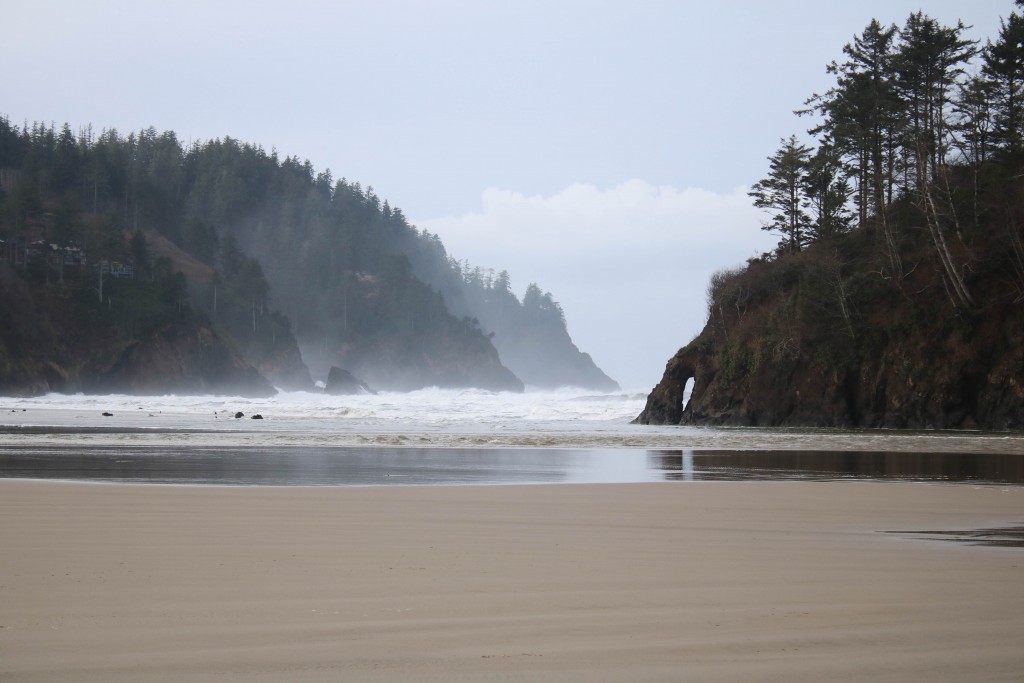 The sun was out, it wasn’t too windy and it wasn’t raining. It was a bit on the chilly side but it was still a nice walk on the beach. 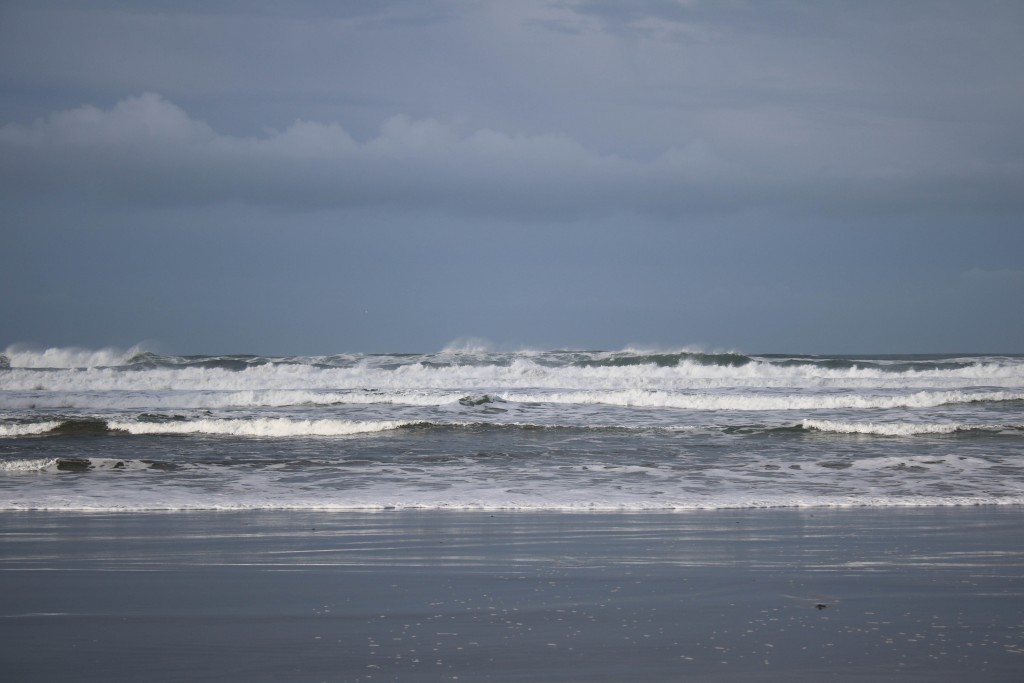 Here is a bump photo–31 weeks at the beach! 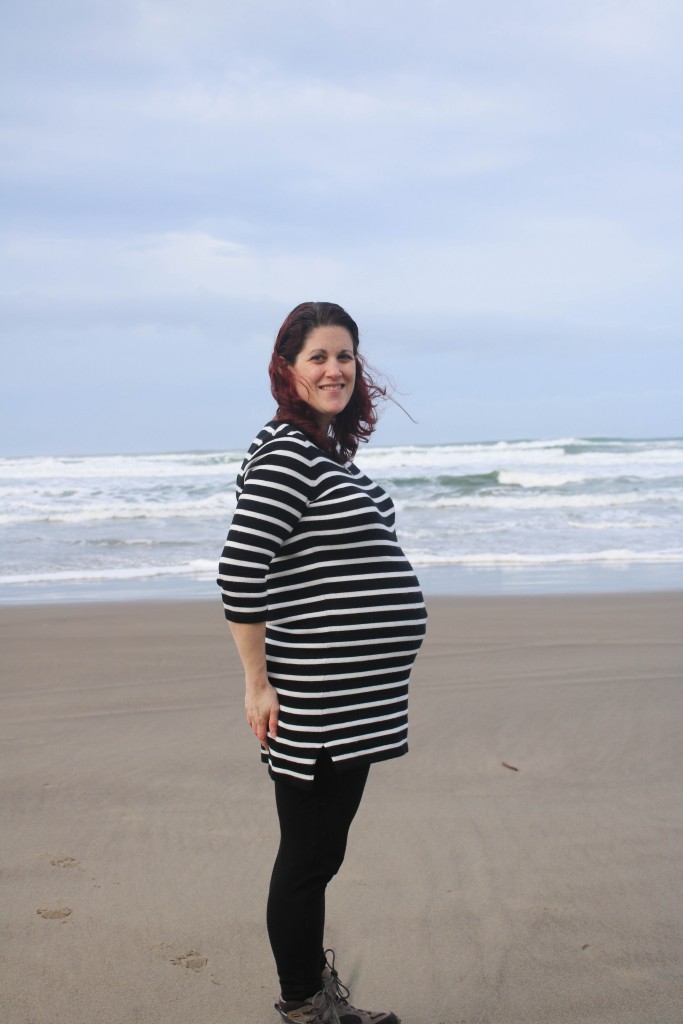 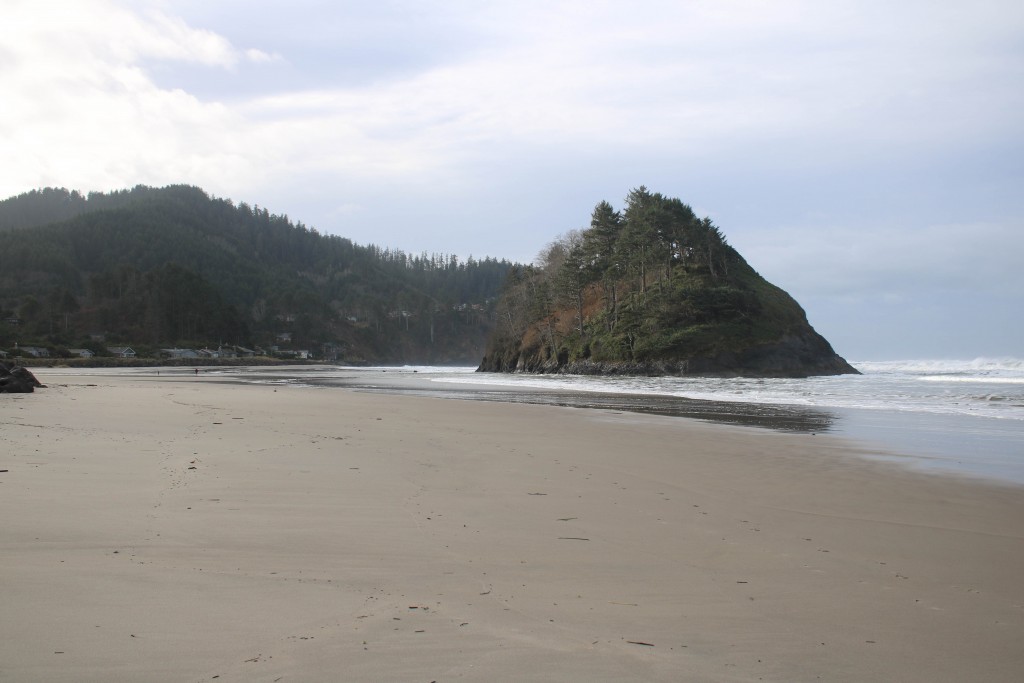 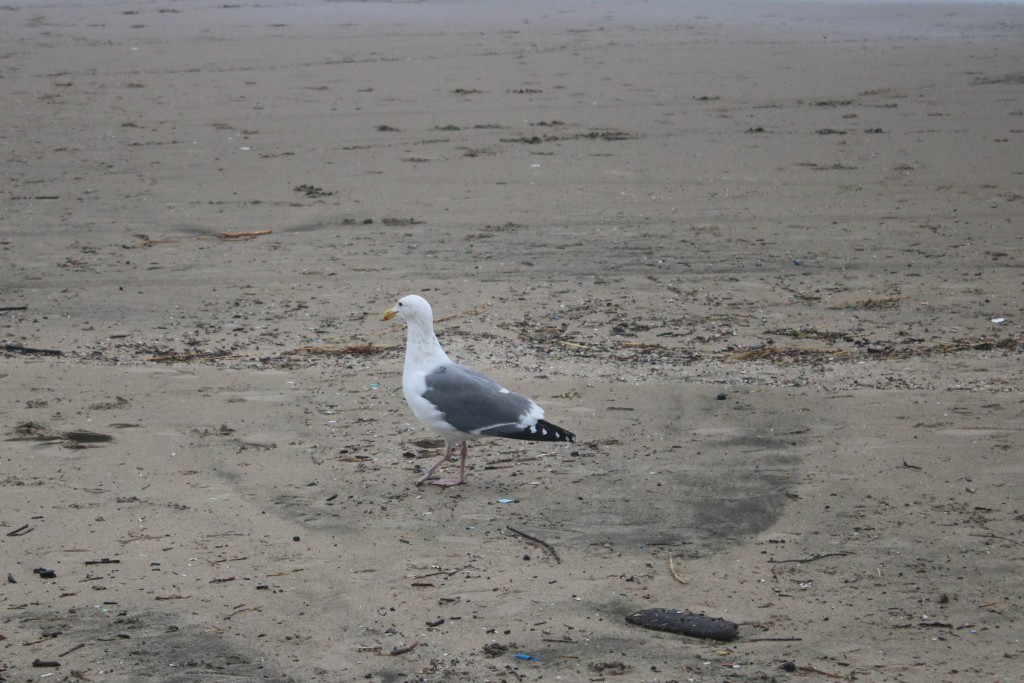 I was happy to be able to practice using my new camera that Michael got me for Christmas. The beach is the perfect place to experiment with a camera.

After walking around a bit it was time to turn back. I was sad to leave the beach, especially since it was finally a nice day! But I was also anxious to get home to our fur babies.

When we got home Bella was SO mopey!! This usually happens after spending the weekend with Amy. I know Bella really wishes she had a playmate. Someday I hope we can get another dog but right now is definitely not the best time, and our house isn’t big enough for two adults, a baby, a dog, and two cats. Our yard is huge and perfect for two dogs though. Oh well. So we deal with Miss Mopey Dog for a few days and then she snaps out of it. She seriously moped on the couch with sad puppy dog eyes all day long.

Monday when we got home I went the gym for a quick workout, had a chiropractor appointment for my SI/back/hip and then snuggled with my fur babies.

I was honestly feeling kind of blah about my birthday this year. I don’t know why. I was definitely blah the last two weeks. Lots of crap and stress and the body issues had me feeling down. Going to the beach and relaxing was a nice way to reset everything. But Tuesday came, I hadn’t slept well the night before, it was raining, I was running late and had to go to work. I usually take my birthday off from work and do something nice for myself–either we go out of town or I take the day off to do something fun. This year I’m saving up all my time I can for maternity leave so…into work I went. Blah!

I did get a massage after work, though. That was nice! When I got home I saw this: 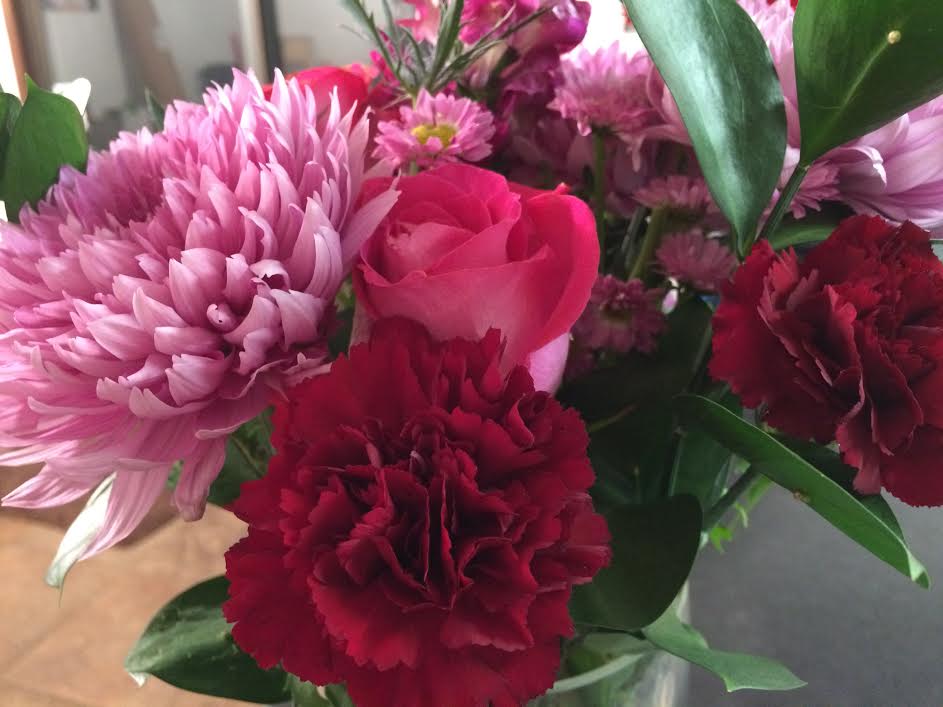 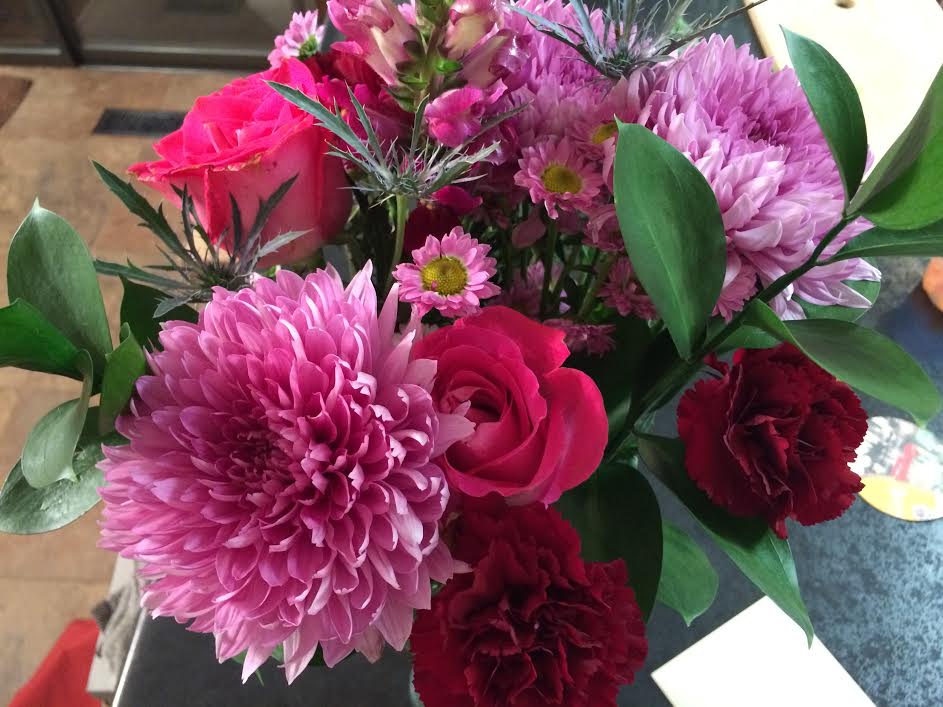 Beautiful flowers and a card from my hubby! And he cooked this delicious dinner for us: 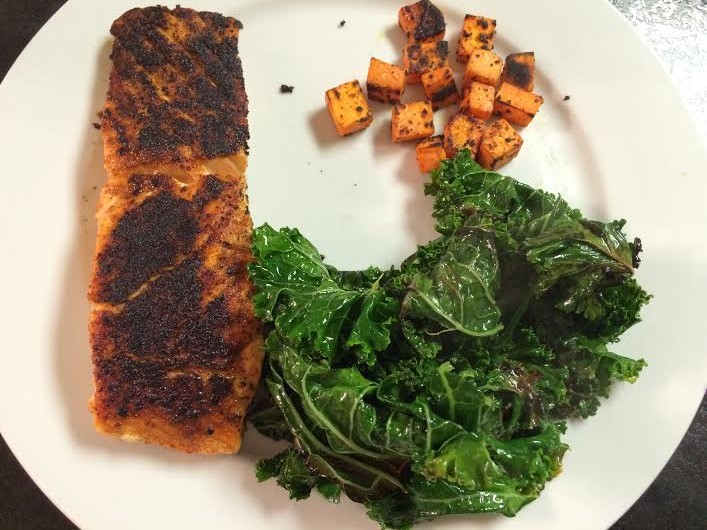 Blackened salmon, sauteed kale and sweet potatoes. It was just what I was craving for dinner. And he surprised me with cheesecake for dessert. We shared this giant slice: 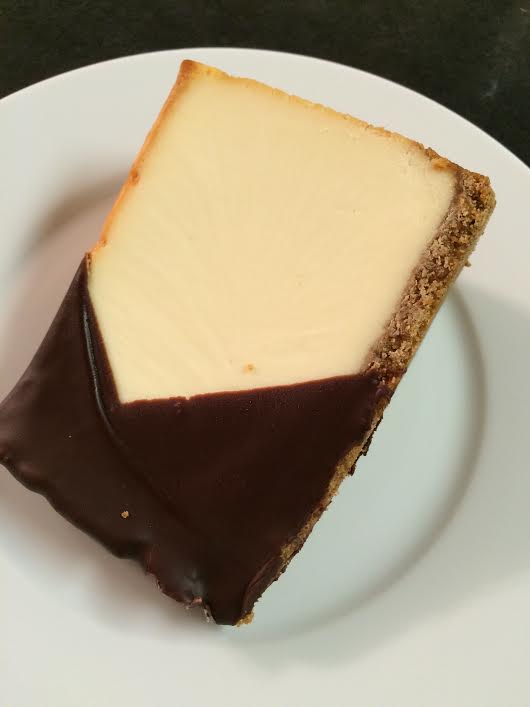 I had been craving cheesecake for awhile and this was a nice treat.

The last place I left off was…oh yeah, my bike went kablooey and I had to ride the last 10 miles of the route without any gears. Fun times! I got back on my bike and luckily the majority of the ride was flat or downhill, or with only a slight incline. No more crazy hills to attempt (and without any gears). The chain sounded awful and I was afraid to stop for fear of my bike just imploding. I wanted to cross that finish line with Michael at my side, ON MY BIKE. I came this far, I certainly wasn’t going to walk across that finish line.

And besides…I had signed up for Reach the Beach for the challenge…Right? Right! What could be more challenging than completing it without gears?

I sucked down another GU, not sure how those last 10 miles would be. We rode through more forest, next to a river and it was FREEZING. I was starting to shiver. We rode out of the forested area and into more rolling hills and countryside.We were in the sunshine at that point so it was teeny bit warmer but not by much.

I was really struggling on my bike. I just kept pedaling.

Then I saw it.

Though the trees, in the distance, was the very tip of Haystack Rock. I knew we had to be close!

That picture was not the sight I saw, what I saw was much further away and through the trees. I put my ALL into those last 10 miles. I pedaled and pedaled. Michael was awesome and kept telling me I could do it and that we were almost there. We turned off the old highway and onto 101. I knew we were even closer when I saw a sign that said Pelican Pub Next Left! Next Left! We were almost there!

But we weren’t. 😛 It was just more trickery! Up ahead, I could see police lights in the middle of Highway 101. They were stopping all traffic to allow the riders to turn left off Hwy 101 and onto the road that would take us to the beach. They closed off the left lane to all traffic and allowed the riders to have that entire lane. I passed a lot of people–even with just one gear. Michael stayed by my side and we got closer and closer to town. There were big yellow signs that said “Finish in 3 Miles!” and “2 Miles Left!” I could do this!

We came to an intersection where we had to stop and wait to be directed. I took this moment to take a photo of Michael. The guy next to us was joking and chatting us up. He had started at the First Start and did the 100 miles. He tried to Photobomb my photo (which was funny) but my camera was too slow to catch it.

The last 10 miles of Reach the Beach were the hardest ten miles I’ve ever done.

The lady directed us to turn left and said we were almost there. We rode on. And then I started to see SAND! I saw BEACH! We really WERE almost there! It was complete chaos. People leaving were riding the opposite directions, cars were moving at snail’s pace to find parking, people were even sitting on top of vans and trucks to watch!

Then I looked up and saw a big white banner with the red letters on it. FINISH!! Oh my god! We were almost there!

And then we CROSSED the FINISH LINE TOGETHER!!!!! 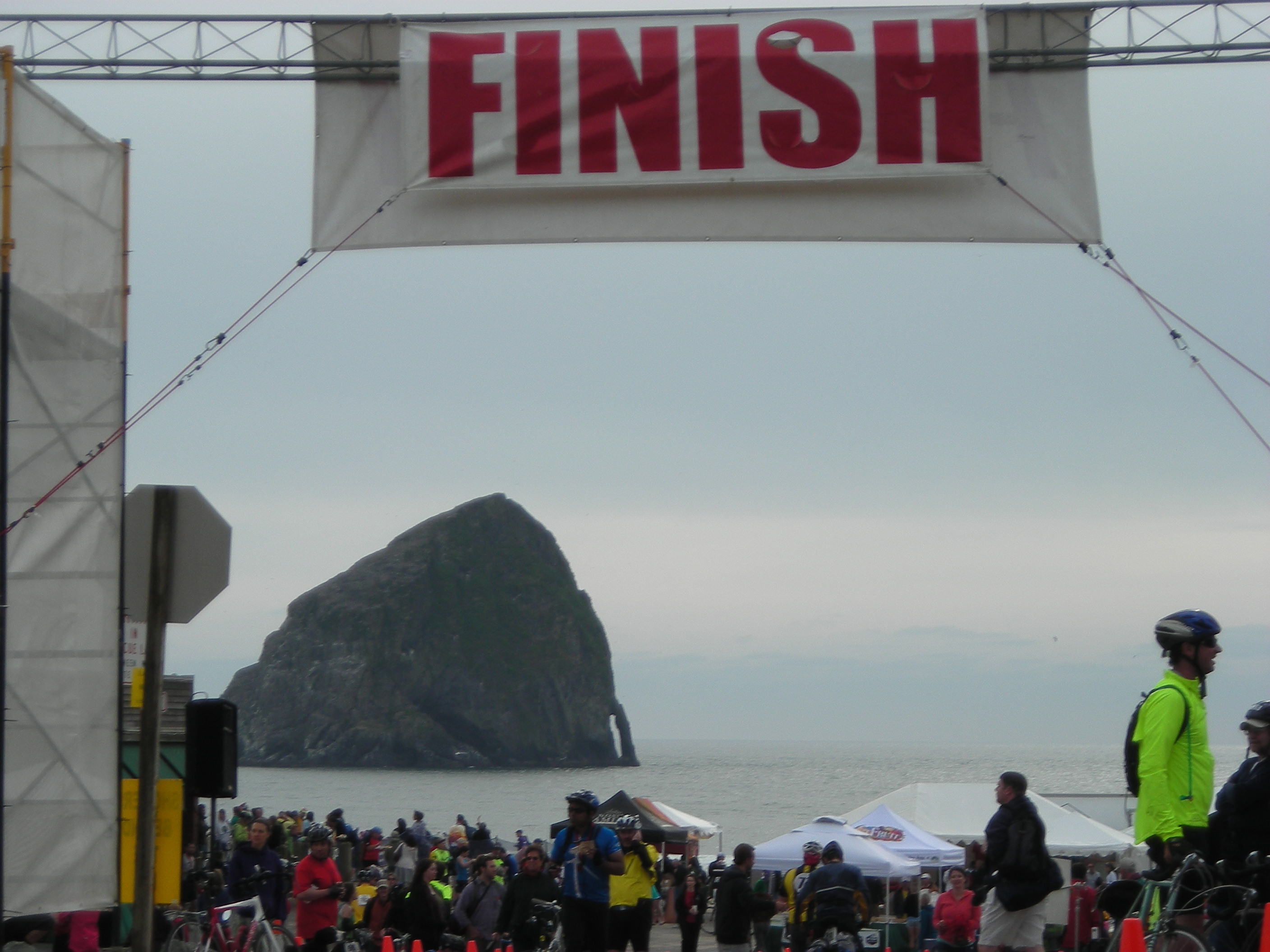 When we crossed the finish line, they took pictures and someone handed us medals! I had no idea we’d get medals! Michael gave me a big kiss (awww) and said he was proud of me. I was proud of him! He did 80 Miles!!! 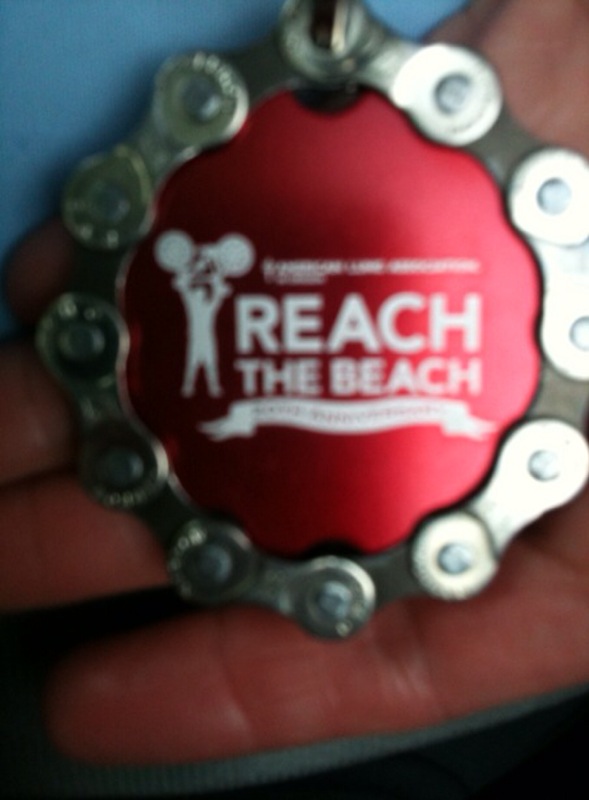 The medal is awesome! (And it should be noted that Michael wore his medal almost all day today. 🙂 ) 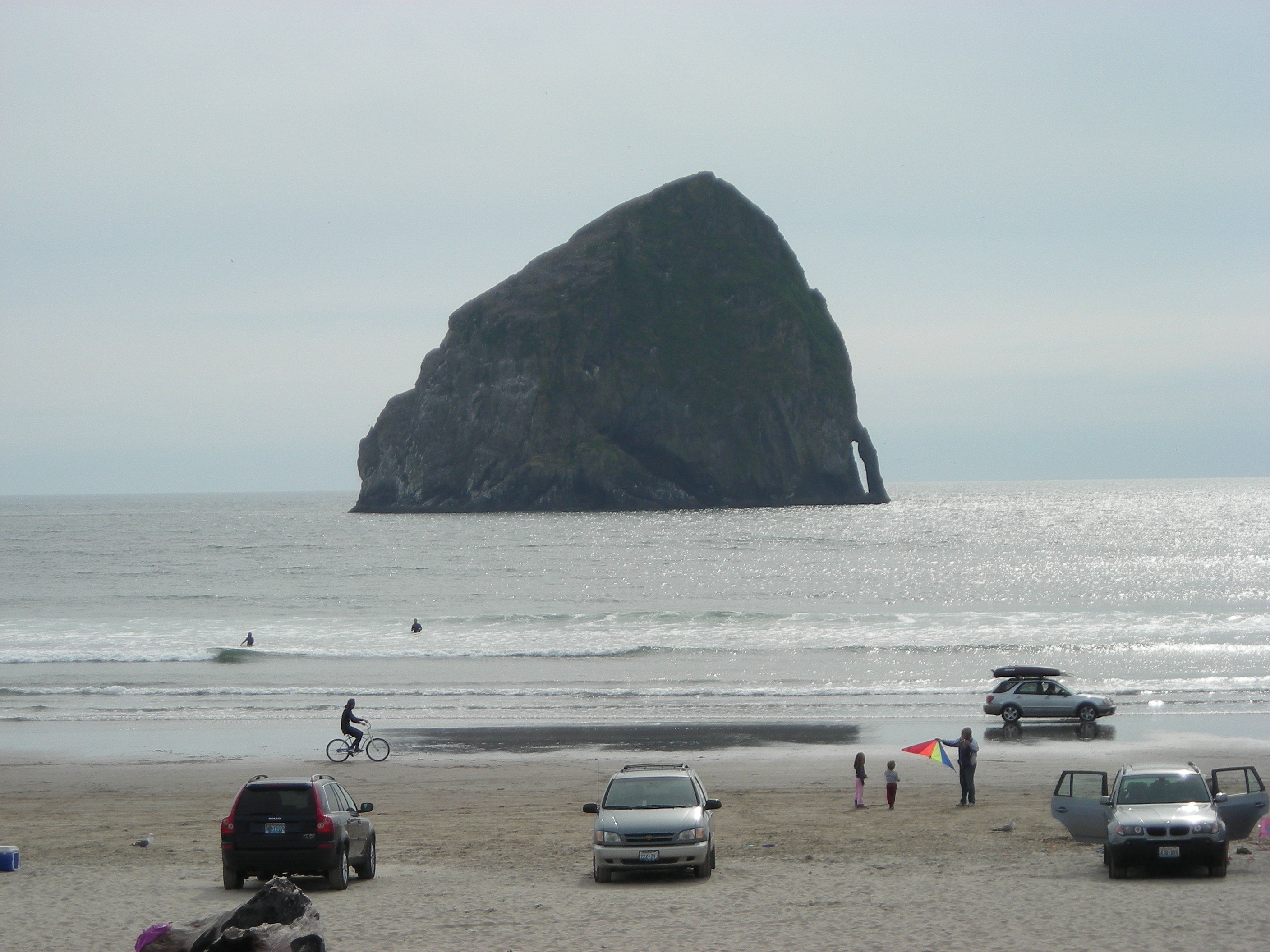 Here are photos of our Heart Rate Monitors:

So technically I did the 55 miles in 5 hours (It took me a few minutes after the finish line to remember to turn off the HRM). But I really think I did it in 4 hours of riding. I didn’t pause or stop the HRM at any rest stops, or during the 20 minutes my bike was broken. I think I had good time. Michael said our heart rate average was so low because of the wind. Which is weird because I feel like I had been working pretty hard!

We were shaky, freezing and it was chaotic at the finish line. But we parked our bikes in the bike lot and got in line for food.

It was buffet style and the line moved pretty quickly considering there were over 3,000 riders! I got a little bit of the pasta, a chicken fajita with rice, 2 breadsticks, salad, and a huge chocolate chip brownie. The line for the beer was too long and it was too freezing. We found a spot inside a tent to eat our food. Unfortunately, I was freezing and shivering so badly I couldn’t really enjoy any of the finish-line festivities. Michael was concerned I was getting hypothermia so we got out of there pretty fast. I’m okay with that because we still had a 2 hour drive home.

I got home, took a hot bath and had a snack of raising bran cereal, then collapsed into bed. I don’t remember falling asleep. I slept like the dead and woke up Sunday morning feeling like a million bucks!

Number of Tears: A few

Number of Times I walked: ZERO

Would I do it again? For sure! It was such an amazing, fun experience. Even with the drama of the bike chain. I loved the camaraderie. I loved how nice everyone was. It was like I was with “my people”… people who like the outdoors, people who like fitness and challenging themselves. I saw a lot of the same people on the ride. People that I passed many many times, then they passed me. We drafted off a couple on a tandem bike many times, passed them numerous times, then they passed us. It was the experience of a lifetime and something I definitely want to experience again. 🙂