I found this article recently, 25 Rules Every Runner Should Follow, expecting it to be just recycled tidbits I already knew but was surprised at how many things I hadn’t heard of or considered. Some of them were particularly good and I wanted to share those.

“5. The 2-Day Rule: If something hurts for two straight days while running, take two days off. Two straight days of pain may signal the beginning of an injury. “Even taking five days of complete rest from running will have little impact on your fitness level,” says Troy Smurawa, M.D., team physician for USA Triathlon. If something hurts for two weeks, even if you’ve taken your rest days, see a doctor.”

That makes a lot of sense! After my knee issues I’ve found that I can’t do really hard activities two days in a row. For example, if I bike to work one day, running the next day hurts. But having a day or two in between and I’m usually okay.

“7. The Race-Recovery Rule: For each mile that you race, allow one day of recovery before returning to hard training or racing.”

That makes a lot of sense to me. So does this next one (which is something I never knew before and certainly didn’t follow!):

“15. The Sleep Rule: Sleep one extra minute per night for each mile per week that you train. So if you run 30 miles a week, sleep an extra half hour each night. “Sleep deprivation has a negative impact on training,” says David Claman, M.D., director of the University of California-San Francisco Sleep Disorders Center.”

There were a few other good things to note, so check out that article if you’re a runner, or would like to be!

I woke up one morning recently without any desire to go to the gym. I laid in bed feeling very blah about it. I decided I’d skip the gym (even though my body really did need the yoga class I was planning on going to) and go for a run. It was kind of gray day but wasn’t too cold old. I headed outside after breakfast and walked over to the track near the house. It was a really quiet morning and I was the only one out there, which was nice.

I was doing the Couch to 5K app and the running intervals were between 6-8 minutes at a time. I actually ran 1 mile around the track without having to walk at all! That made me feel really good. 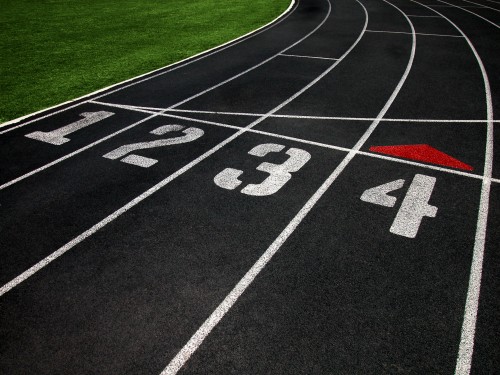 I’d run about a mile and a half by this point and then I started to feel some sprinkles. I was like, Meh, it’s not a big deal. And kept running (of course I wasn’t wearing my running hat) and then a few minutes later is was not just sprinkles, it was pouring rain! UGH! The rain was a lot but not horrid and I kept running because I didn’t want to quit early.  Then it just drenched me. There is definitely something a little exhilarating about running in the rain. It feels very primal and like you’re one with the earth as the rain falls down. 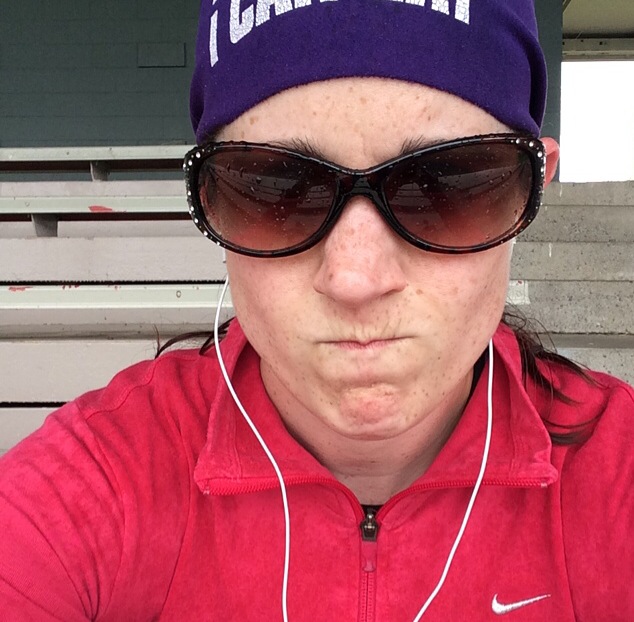 The rain kept coming down harder and harder and I finally took refuge underneath the bleacher roof.  I thought it would let up so I waited for a few minutes, my run jacket and headband completely soaked, and then gave up and ran back to the house. Boo. 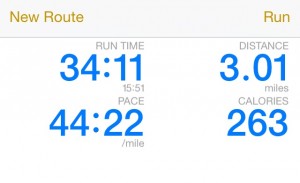 Even though the rain cut my run short (only by about 10 minutes or so), I was glad I stayed out there and got some miles in. I walked the last half mile to the house to cool down and when I got inside (and stripped off the very wet jacket) I did some yoga stretches in the bedroom for about 10 minutes. I’m trying to be REALLY GOOD about stretching after each run. I know my IT bands need that. 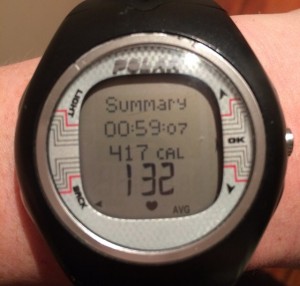 Later I met my friend Star for dinner at a new restaurant. The SE Division area of town has been under so much change and development! Every time I drive up there, there’s new condos, new restaurants and everything looks different! We went to Bollywood Theater, which a friend recommended. I was excited to try it because it’s been AGES since I had Indian food. 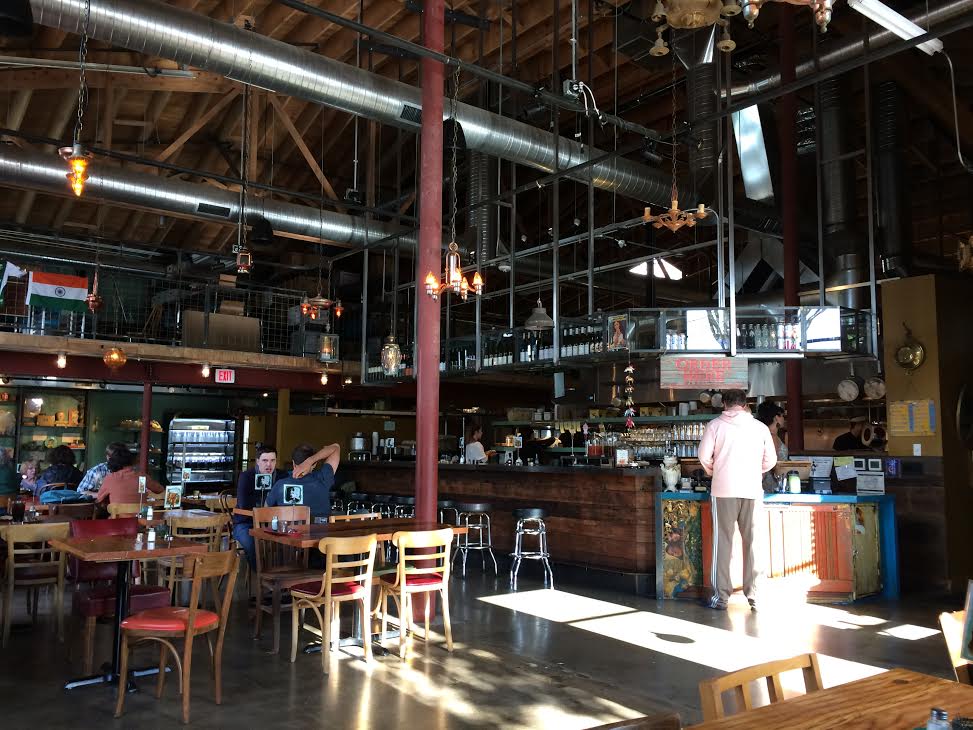 The restaurant itself was very cool. It was nearly empty when I got there and when we left it was packed full. It was loud and sometimes difficult to talk to my friend and hear what she was saying. First–what I didn’t like. I absolutely HATE restaurants that make you bus your own table, get your own water and silverware and order at the counter. Call me high maintenance, I don’t care, but if I’m going out to a restaurant I don’t want to do the work. I want to be served. And if service is good I tip well. It really irritates me when restaurants adopt this model and I probably won’t go back based on that. Also, the line to order food snaked through the restaurant and out the front door. It was also a VERY slow line and took forever to order.

Second–what I did like, the food. The food was excellent. Star ordered the Egg Masala small plate and I ordered the chicken curry small plate. Both came with saffron rice. The curry was rich and spicy, the chicken in my dish was overcooked, so that was disappointing. 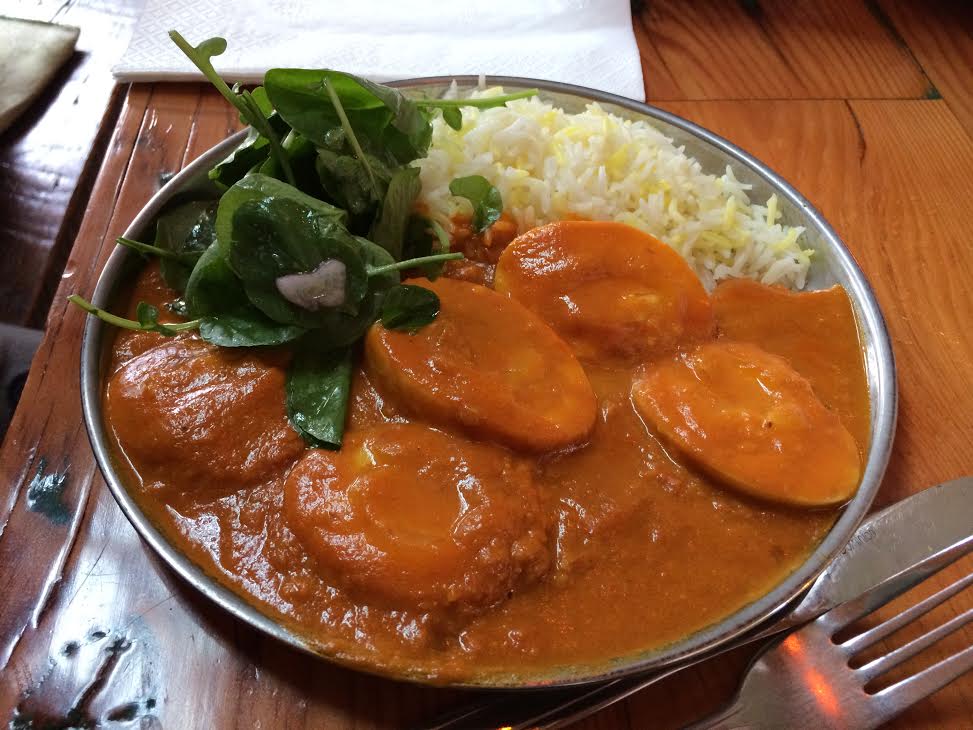 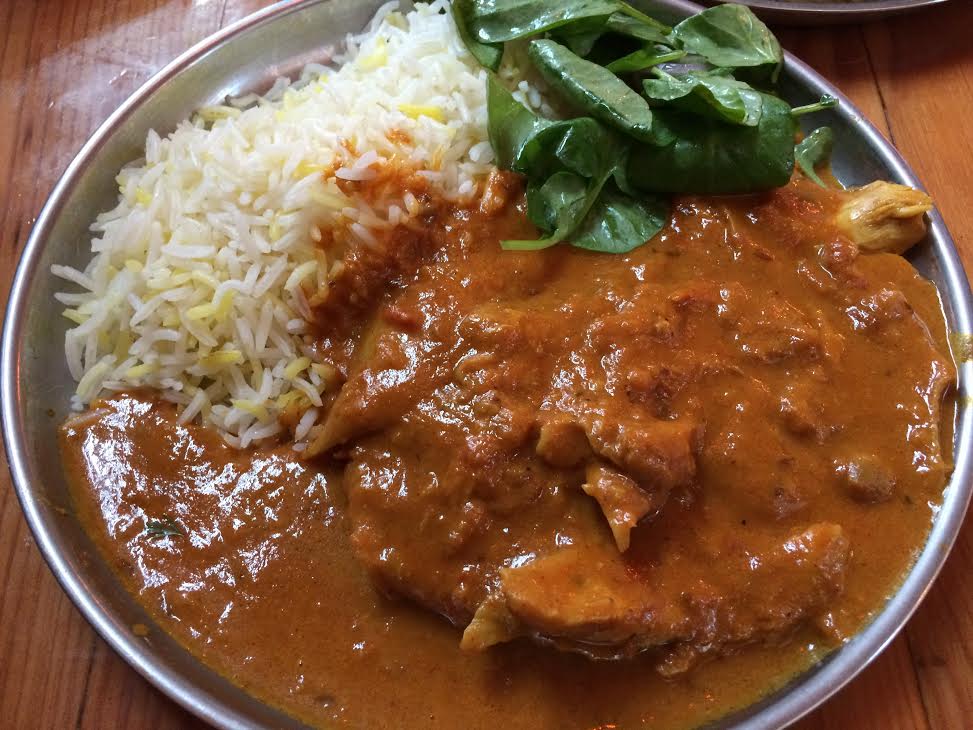 What really made the food excellent was the Kati Roll I ordered for us to share. It was egg, pickled onion, green chutney, spinach and paneer cheese wrapped in fried indian flatbread. It was A-MAZ-ING!!! Probably one of the best things I’ve eaten in a long time and will crave that wrap for awhile. Both Star and I were raving about it the entire time we were there. It was THAT good! It’s a shame my chicken dish was a little overcooked and the whole serve yourself thing, otherwise I’d be raving about this place. 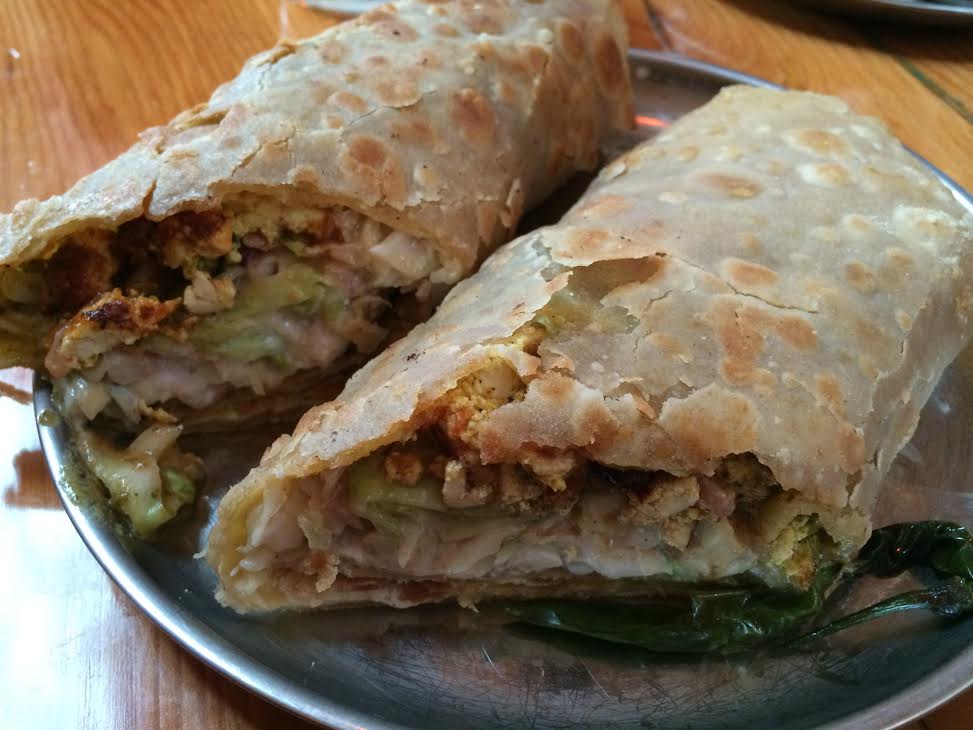 Would I come back? Maybe–but I would get the food to go (especially that kati roll!!!) and eat it somewhere else. I love Indian food and it’s been so long since I had it, but I’d probably find somewhere else to go so I could have the full restaurant experience. Anyway, other than that it was good to catch up with my friend and as I write this I’m still thinking about that wrap…yum!

Sunday morning I slept in til 8am and then got up to go for a run. I love running in new places. The change of scenery is energizing and it’s a fun way to sight-see. Some of my favorite runs have been in other places–Vegas, Tucson… 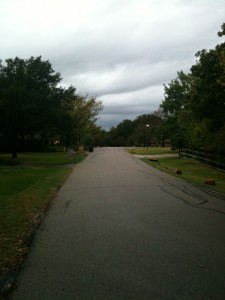 Remember how I said we left Portland, rainy and cold and arrived in Dallas in the middle of their first storm in 6 months?Ironic, yes. I wanted to lay in bed and relax a bit but I checked the weather app and it said the rain was going to start at 9am and last most of the day. It was now or NEVER. I got up and headed outside. I started out easy and ran down the quiet neighborhood street. I wanted to beat the coming rain. 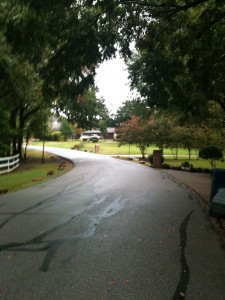 The road was rolling and soft (easy on my knees). I ran a mile down to the main street in 10 minutes. It felt soooo good to run that fast! I am getting closer and closer to my pre-injury pace (about 9’5 mile). 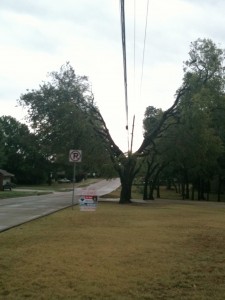 It was fairly cool for Texas but still pretty warm out. It was also very humid. It felt like I was running through a cloud ready to dump on me at any second. Despite the humidity I did okay. I ran by some impressive houses and only stopped to walk a few times. 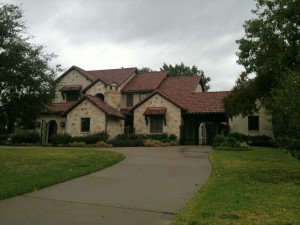 I ran through a small dog park with a duck pond. There were bridges crossing gullies where water probably was during stormy weather. 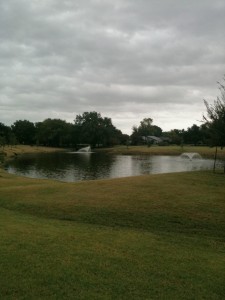 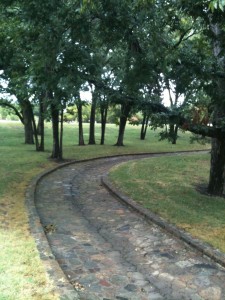 I stayed close to home for awhile until I got a feel for the neighborhood layout. Then I ventured further out. There were rolling hills which gave me a good workout. 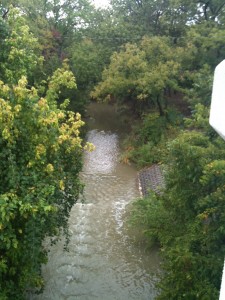 I ran down a hill and stopped to see a historical marker–an old cemetery from the 1800’s. It was nestled in between a few new houses. Michael’s stepmom later told me that the area was supposedly built on old Indian burial grounds. Yikes! Poltergeist, anyone?? 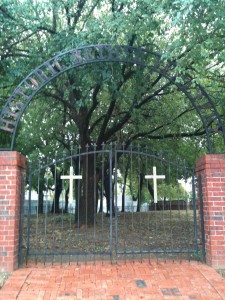 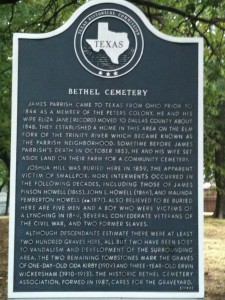 I headed back up the hill toward home because I started to feel some raindrops. I didn’t want to be too far away during a downpour. I made it back to the house just before the rain started. 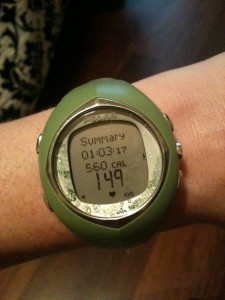 Look at me!!! Almost 5 MILES BABY!!!! And I wasn’t sore at all. I had no pain, no aches, no weird twinges in my knees or legs or ankles. Nothing. It was amazing. I’ve come to the conclusion that I always run better on vacation. 😉 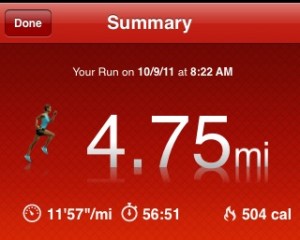 I’m happy with my run! I had no body aches and being able to do almost 5 miles felt GREAT!! 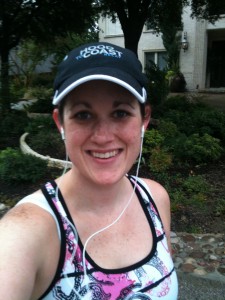 Back at the house I stretched (sort of), showered and we all ate breakfast before heading out for the day. Michael’s stepmom made a Quiche Lorraine and cheesy grits! I’d never had cheesy grits before. I loved them. They were so tasty. It reminded me a lot of polenta. She promised to send me the recipe. I want to try to recreate the grits. 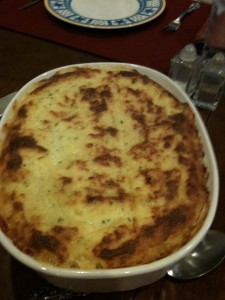 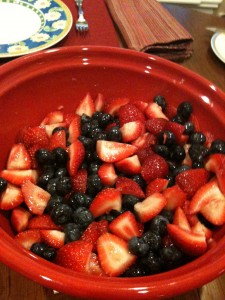 I ate a bunch of fruit too (and a freshly baked biscuit). It was basically brunch since it was pretty late in the morning and we’d be skipping lunch in favor of sight-seeing. It was a high calorie meal but I knew I wouldn’t be eating til dinner time, so I did not care.

QUESTION: Do you ever run on vacation? Have you ever had cheesy grits?