This week was a good week for me in the gym. I was feeling strong and positive about my body. Before my Spin class I hit the treadmill and had the BEST run I’ve had since I started up again. I started out at a 5.0 speed instead of slowly warming up and I really felt like I couldn’t go fast enough. it felt fantastic!

I think part of the reason was that I got distracted by that Super Nanny show on TV. Man are those kids monsters on that show! I’m sure that’s the point of the show, but still….Before I knew it, I had run a fast (for me) mile and I kept going. Then I looked down and I’d run 1.25! It was such a nice boost. 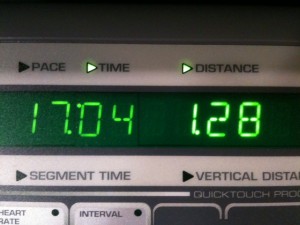 I went to Spin after my run and settled in for lots and lots of climbs. I realized something in my class. By going easy on myself in Spin class, I was just cheating myself for when I went back outside on my bike. I was doing the same workout as the teacher, similar resistance, but babying my body. I was so afraid of setting the resistance too hard and hurting my knee, I thought it was better, smarter, to reduce it. Instead of protecting myself, I think I was wasting my time. I wasn’t challenging myself as much as I needed to and I was really just going through the cardio motions. 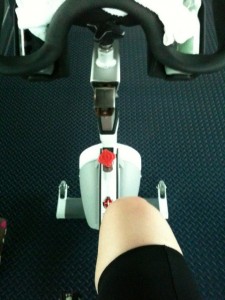 This recent spin class was different. When the instructor said “8 out of 10 challenging climb” I actually cranked up that knob until it WAS challenging for me. NOT just a “sort of challenge that didn’t risk anything” kind of workout. And guess what? It rocked.

While I was on the bike, doing these very challenging seated climbs where it was a struggle just to propel my feet and legs each rotation, I visualized that monster hill in the Portland Century. It was the kind of hill that was short but straight up–really, it was a wall right in front of me. It was the kind of hill where cyclists gave up before they even started to climb it, and instead walked their bikes up. It was the kind of wall hill that I wanted more than anything to conquer on my bike–without giving up half way up like everyone else.

I remembered what I felt like when I was trying to climb that hill last summer. I remembered how the air in my lungs were burning as I gasped in and out like a fish on land. I remembered how my thighs and quad muscles were scorching in pain and my body was burning every little last bit of energy I had left to make it up that wall. And I remembered how wobbly and happy I felt once I reached the top. I used that visualization to get through the “8 out of 10 challenging climb” in the class. It was hard, but nowhere near as challenging as that wall.

I was glad I pushed myself in the class, challenging my body to do what I’ve been training to do: climb hills. My legs are strong. The muscles in my legs are bigger. They can take it. They want those challenges. So while the music in the gym was pulsating in my ears and sweat was dripping down the back of my neck, I hunkered down and just focused on that wall that I climbed last summer. I closed my eyes and thought about every single moment and every single pedal rotation until I was through it. It felt awesome! 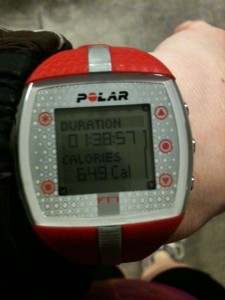 That being said, this is just a friendly reminder to anyone else working out, taking fitness classes, trying to get in shape….

I got home from the gym to find a magnificent feast waiting for me! It was magnificent for two reasons: 1) I was absolutely famished and burst into the house kinda like Kool-Aid Guy and 2) I didn’t have to do any of it! Michael cooked the steak and the veggies without any of my participation, which was kinda nice. I just stood there and enjoyed the jalapeno and garlic stuffed green olives his mom brought us back from California: 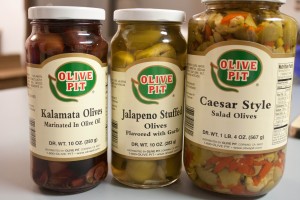 The jalapeno stuffed olives were awesome and SPICY! I ate about 5 of them. Then dinner was ready. It was nice to have these green things again: 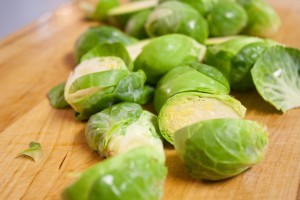 The steak was thick: my cut was about 1.5 servings or just under that because there was actually a lot of fat on one side. The Brussels sprouts were sauteed in grapeseed oil, seasoned with salt and pepper and had some bacon in it. Yes, I know I was eating steak and bacon but Brussels sprouts are so damn good with bacon! 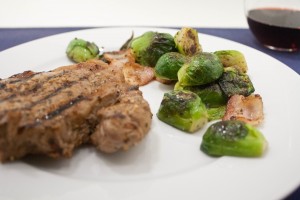 The dinner felt like a hearty, caveman-diet. Meat. Green food. More Meat. Wine. RAWR! But it was tasty. And exactly what I needed after my challenging workout. The positive run and the positive spin class boosted my mood tremendously. I cannot express just how great I felt.

QUESTION: What do you visualize when you need that extra boost?

I went to the gym on Wednesday, looking forward to returning to Spin class after a week off. After a lot of trial and error I’ve found a good teacher and a good class that I really enjoy. I was surprised when I went into the Spin room to find a substitute teacher. Boo. I tried not to be too negative about it, despite the fact that the sub looked like a Barbie doll and was wearing full makeup (even blush). My first thought was “dammit, I’m totally not going to get a good work out tonight.” This was not the case, as I soon realized.

Barbie (I have no idea what her name was) basically skipped the warm-up period and immediately instructed us to set the resistance at “8 out of 10.” Seriously? I did as instructed but it was probably more like a 7 out of 10 for me (I was worried about aggravating my knee). Barbie proceeded to bark at us to increase the resistance about every 20 seconds or so until we were essentially biking up a mountain.

Don’t get me wrong, I love to sweat and I love a challenge AND I place value on my workouts depending on how many calories I burn but……this chick was intense. Despite her wildly unrealistic expectations of our abilities, the workout itself was pretty good. We did a very fast interval routine of VERY challenging standing climbs then back in the saddle for about 30 seconds, then back up standing again. I LIKE those types of routines but this chick was nuts!

She said things like “Let’s get our heart rates to 205!” And then she went on a long rambling tangent about how if we were older than her  (“like over 40”) than we shouldn’t do 205 but that she “wasn’t 40.” Um, okay. Then she told us that we needed to challenge ourselves to do “15 out of 10” in resistance. Eventually I ignored her recommendations and just did the routine but at a resistance I knew would not cripple me the next day (it’s important to tailor your workouts to your own abilities and know your body). My heart rate was steady in the 160’s –which is pretty high for me.

Like I said, I liked part of the workout and I love being challenged. I feel like the instructor was a little….off. Her tone was super grating. I would use the word “shrill.” She reminded of me of Parker Posey’s character in the movie “Dazed and Confused.” Remember her yelling at the freshman in a shrill, shrieking voice? Yeah…. 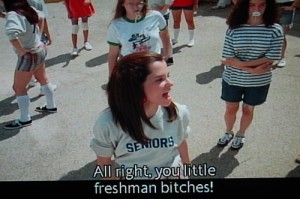 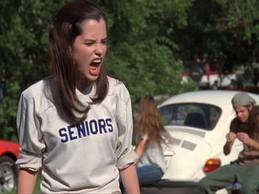 The sub instructor reminded me of her. Her tone was really off-putting and I found that it annoyed me as the class went on. She would bark things like:

I don’t think I am adequately illustrating just how “whiney/nagging girlfriend” her tone of voice was. Instead of being encouraging or inspiring, I found that it was obnoxious and I was just begging for the class to be over with. I didn’t feel positive about her or my time spent there–even though I burned a crapload of calories.

After class I asked another gym-goer what she thought of the substitute. The girl was super nice and she just laughed and said, “Um…she’s not the worst I’ve ever had but….” Yeah….

Oh well. They can’t all be naturals, I guess. If I had any words of wisdom for Barbie, I’d say tone is everything. Less nagging/shrieking girlfriend and more cheerleader “you can do it!” She had a good base but needed to tweak the workout to fit the abilities of the people in the class. Oh, and warm-ups are nice. 😛 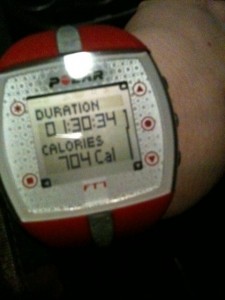 (Those numbers include about 100 calories from running 1 mile on the treadmill and doing ab workouts.) When I got home, sweaty and sore, Michael was preparing a feast for dinner! I don’t know what inspired him to do so, but dinner rocked. He made French Onion soup from scratch (healthified by skipping the bread and only using 1 slice of Swiss cheese for 70 calories). 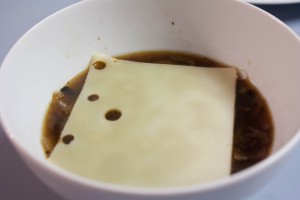 And we split a cut of steak. I added some raw broccoli and Light Ranch dressing to mine because I was so hungry I felt like I could eat everything in sight. 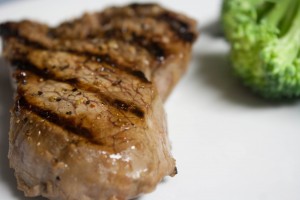 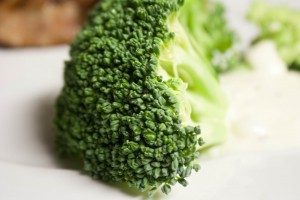 I made it through the day without eating ANY candy from the Candy Room at work and was feeling really positive about breaking my habit. 3 days in a row, go me! For dessert at home I had one serving (200 calories) of chocolate. It was from the giant chocolate bar that Michael got me for my birthday. 🙂 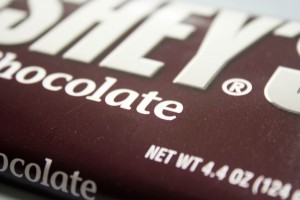 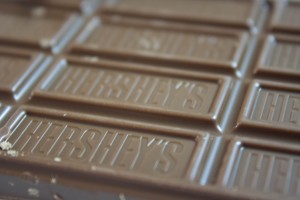 It hit the spot and was the perfect amount of dessert. I savored every single bite and still had about 200 calories left for my day.

QUESTION: Have you had negative experiences with fitness instructors? Did you leave the class? Stay and suffer?