It’s GORGEOUS in Portland! For the last week or so it’s been sunny and warm and yesterday it was 80 degrees. Thank goddess! I am so over icky gray rain.

Over the weekend we worked in the garden a bunch. It was nice just being out in the sunshine. Every day after work we’ve eaten dinner on the deck. Logan immediately wants to go outside and play when we get home from daycare. It’s just so nice! I want to soak it up. The downside? My allergies are TERRIBLE! 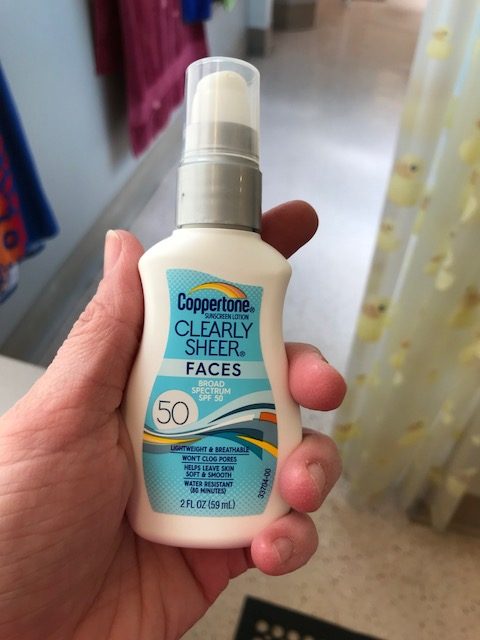 Wednesday I went for a nice run in the sun during my lunch break. I’ve been running the waterfront loop downtown about once or twice a week depending on the weather. Pre-run I had my apple and string cheese for a snack, slathered on the sunscreen and headed outside. 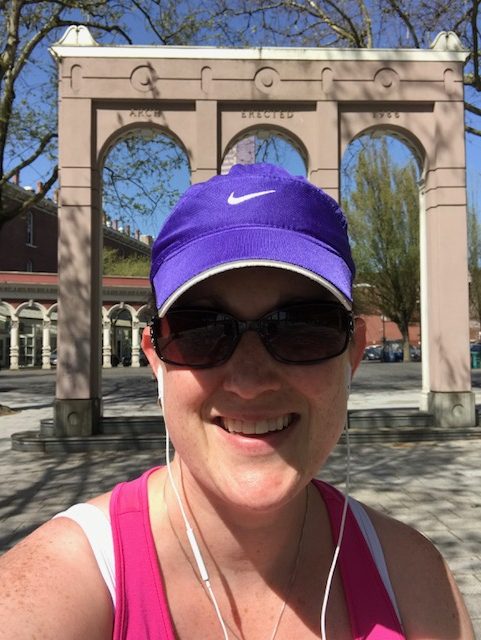 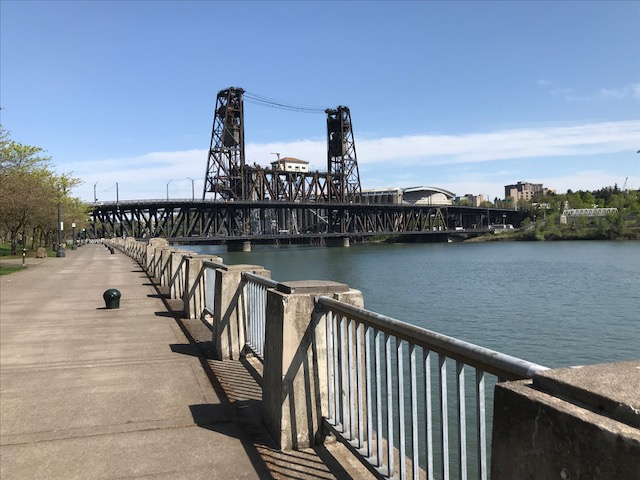 It was perfect outside and not crowded yet! 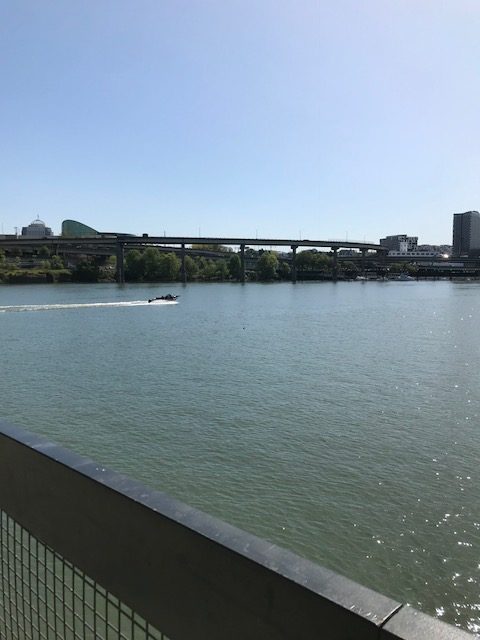 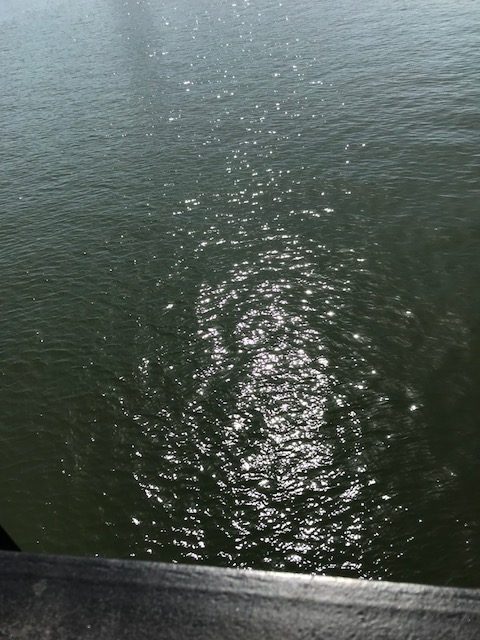 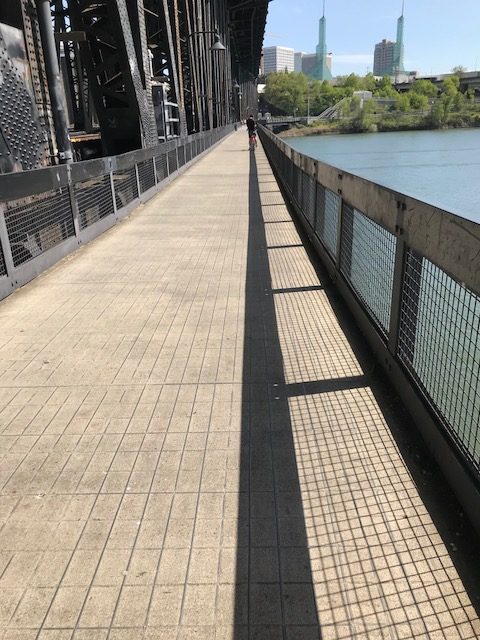 This time I went across the Steel Bridge first then ran down to the Hawthorne Bridge. I like to switch it up periodically so it doesn’t get boring. I’m thinking that if I get a little faster I might be able to extend it to the new pedestrian bridge and make my run a little longer but I’m not there yet. 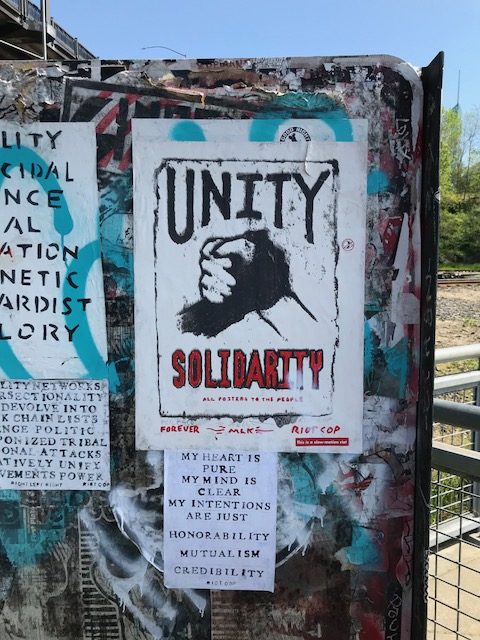 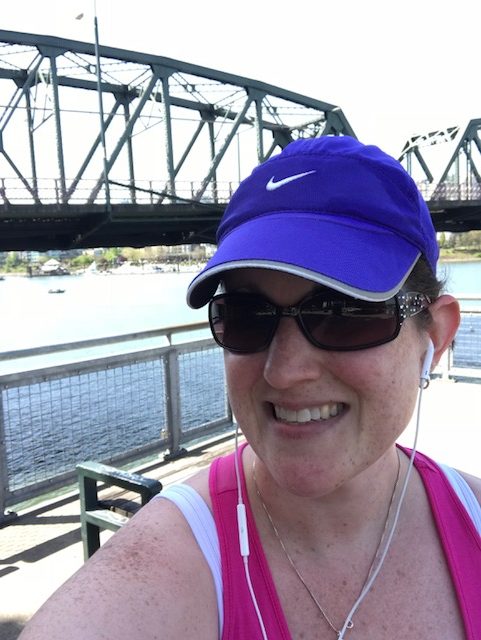 The waterfront wasn’t busy when I went out, which was nice. Unfortunately, I had to take a lot of walking breaks. I have no idea why. My legs just felt like lead. The first mile was great. I felt good, had energy, but then I started to slow down. 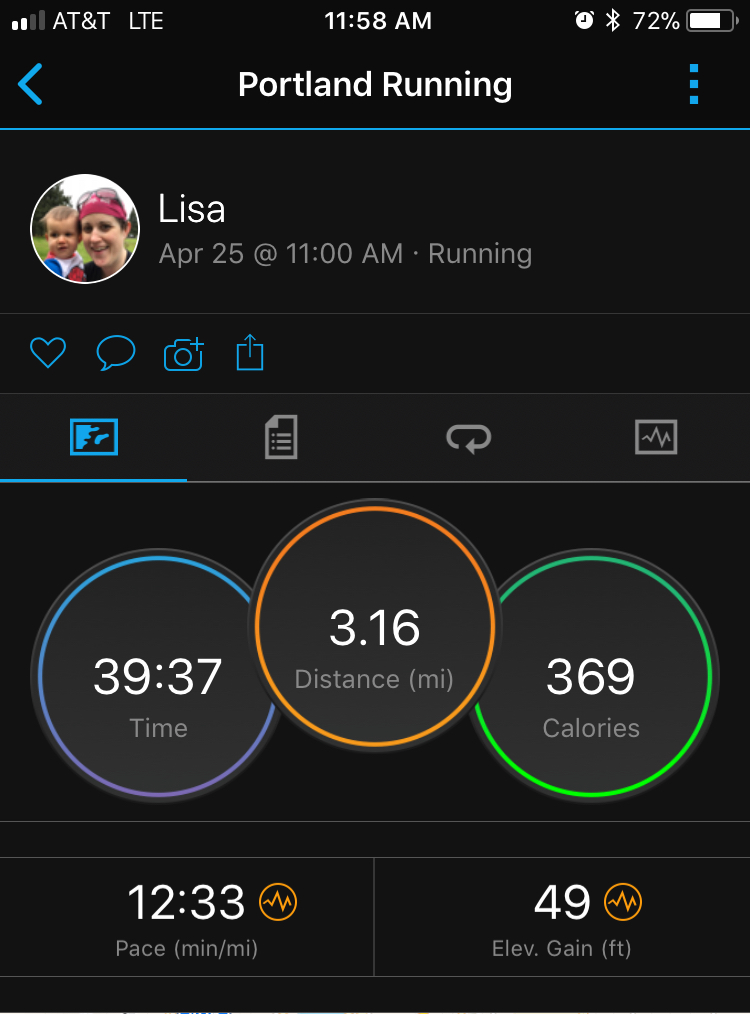 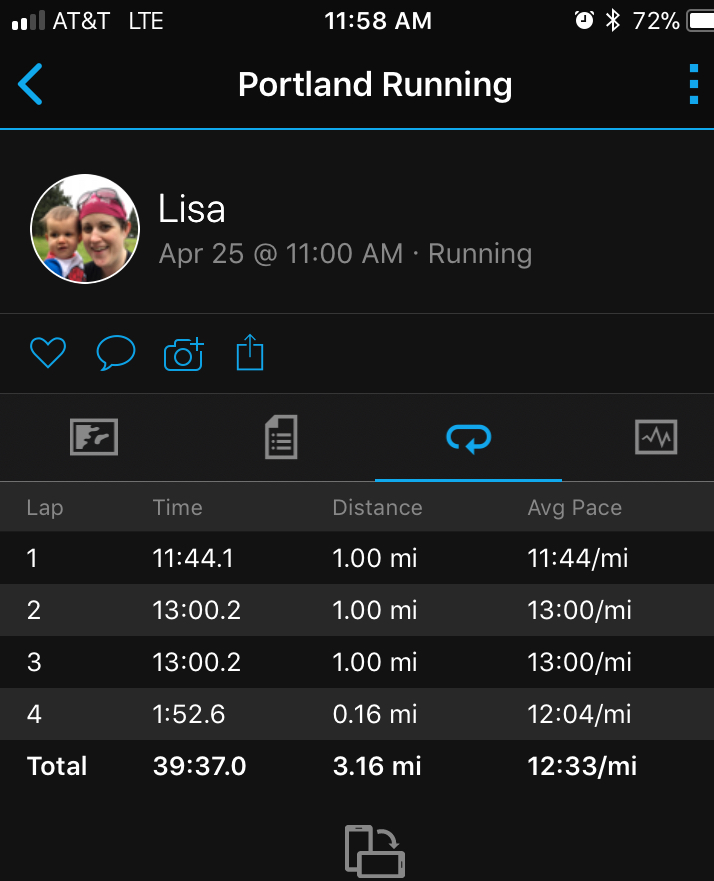 After my run I walked the last block to cool off then went to the gym in my building to stretch and foam roll.

Lunch was shredded Thai chicken I made in the pressure cooker with kimchi. My afternoon snack was plain Greek yogurt, fresh strawberries, walnuts and some low sugar granola. I’ve been REALLY really hungry lately and the normal stuff hasn’t been satisfying my hunger, so I added the walnuts and granola in hopes that it would tide me over better. 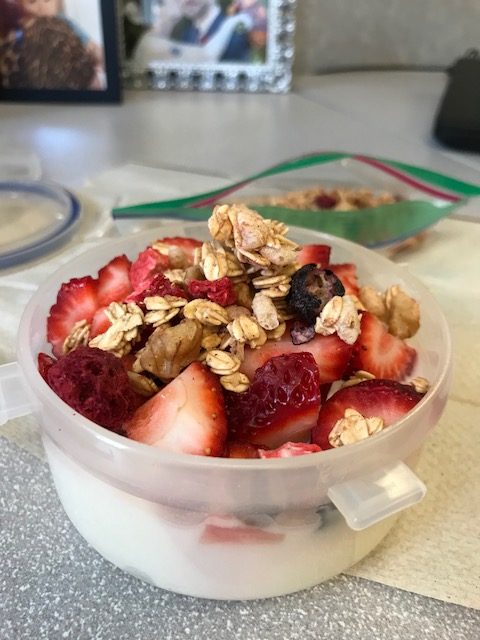 Dinner was Trader Joe’s carrot “noodles” with spaghetti sauce, meatballs, fresh parmesan and garlic bread. I like the carrot noodles better than the zucchini noodles. I felt like the zucchini ones cooked down to nothing. But the carrots kind of hold their shape and are a little al dente. They feel more like you’re eating pasta. 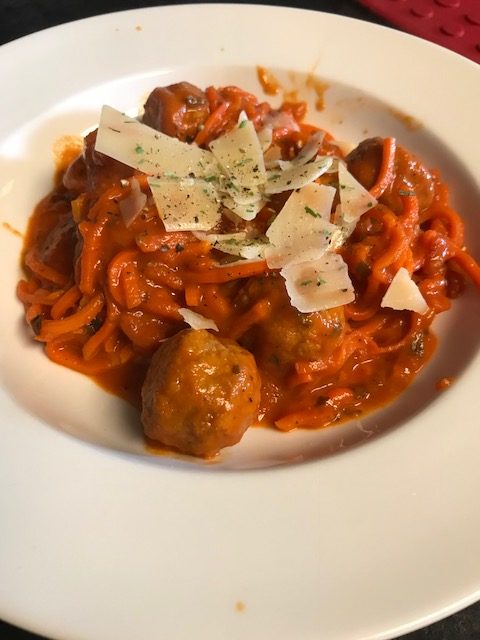 Very delicious, satisfying and filling dinner. We watched an episode of Anthony Bourdain (Southern Italy) and then crashed in bed early. On days I run the waterfront I am CRUSHED by bedtime! I was hoping to get in an epsom salt bath but I had no time. Oh well. Next week!

QUESTION: What is your favorite way (besides salads) to get more veggies into your meals?

On Tuesday I biked into work. I wanted to take it easy after doing the Portland Century so I drove to the Park n’ Ride and biked from there. It was a good mid-way point and I wasn’t quite ready to bike from the house. I wasn’t sore but I wasn’t sure if I had the energy to do it. On Monday I felt really good, wasn’t too stiff or sore, but I did kind of crash in the afternoon and got really tired. 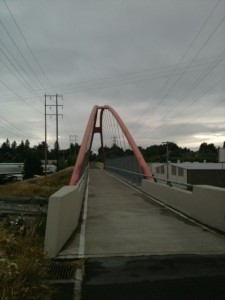 The weather was iffy. It was gray and muggy, 66 degrees with a 30% chance of rain. But I felt like the Century had toughened me up and I was ready to bike no matter what! I set out and biked about 1 mile before I was too damn hot. I stopped and took off my jacket and put on my arm warmers instead (see below). 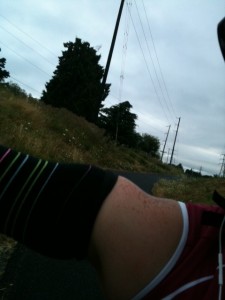 I ended up biking only a few more miles before taking those off. Definitely did not need the warmth. 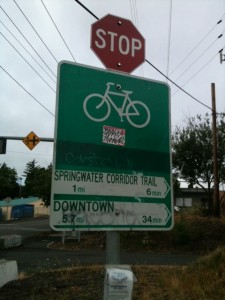 There a small stretch of the Springwater trail where the trail ends. Lots of newbies get lost at first. There was a guy on the trail who asked me how to get downtown. I told him to turn left at Umatilla and bike through Sellwood to get back to the trail. 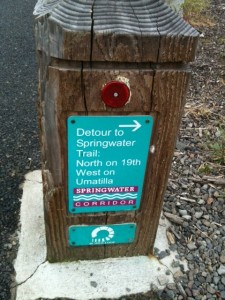 I got to Oaks Park and reconnected to the Springwater. It was cool to be there again after Sunday’s event. It was a pretty quiet morning, not many people out. The wind wasn’t too bad. It started to sprinkle but it felt kind of nice. I biked FAST. I just pedaled away and felt like I had wings propelling me forward. 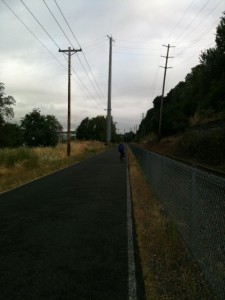 I biked passed OMSI and connected to the waterfront. I felt pretty warm. 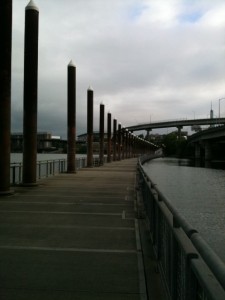 I crossed the floating ramps and took the Steel Bridge to the west side–on the lower deck this time. I made it to work in no time at all. I felt great! It was the perfect recovery ride after the Century. 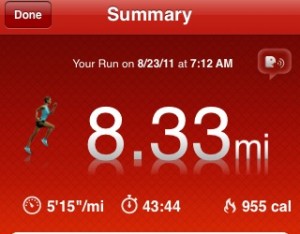 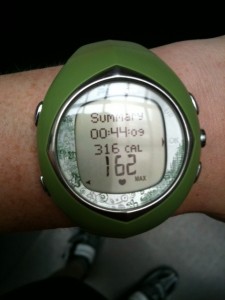 I was so happy that I wasn’t sore. No saddle soreness, no lead legs. The ride was GREAT. And I’m still feeling high from Sunday’s Portland Century. I have renewed excitement about cycling and doing events. The last event I participated in was running the Hood to Coast Relay. That ended with a sour note and kind of made me wary of doing organized events. I am so glad I am back to loving them!

It was about 89 degrees when it was time to bike home. Don’t get me wrong–after a very long winter and spring of gray and rain I am happy for the sunshine. But biking in 90 degree weather with lots of humidity feels like biking through water. 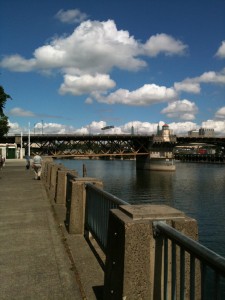 I’ve said it before and I’ll say it again, the hardest part of my commute home is the first mile. Sometimes it takes forever to just get out of downtown. Dodging people on the waterfront trail is not my favorite part. It was hot, I was slathered in sunscreen and I hadn’t had time to eat the rest of my apple before heading home so I was starting to get hungry. The ride was decent until I got to the Springwater Trail. I was hot and there was a headwind. I was slowing down. I stopped in front of the Oaks Park Amusement Park to drink some water in hopes that it would revive me. 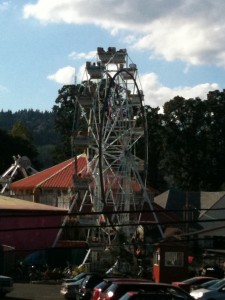 I was glad that I had driven part way instead of biking from the house. I continued on and made it back to the car. I was pulling into the Park N’ Ride lot where the car was and some lady in an SUV almost hit me. She was going the wrong way out of the lane. Her window was down so I pointed out to her that it was the wrong way. She said something snotty to me. Why is there such a hatred toward cyclists?? I just don’t get it. I follow the rules of the road, I watch for cars and try not to be annoying. There’s no reason for such aggressiveness. 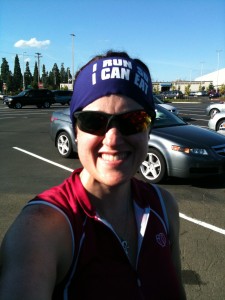 I was a bit grumpy when I got to the car. For a lot of reasons. The blissful glow I’d had since the Portland Century was starting to wane. 🙁 Anyway, it was a decent recovery ride. I wasn’t sore for any of it, no saddle soreness, no back pain. That’s all I can ask for, right? 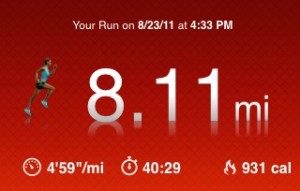 Hmm, which puts my total mileage for the week at almost 89 miles! Woo! 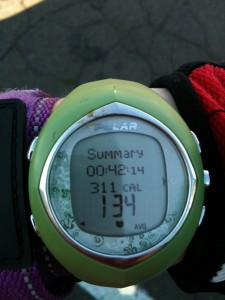 Michael made a comment about his own commute–he said the distance felt like a joke after the Portland Century. I kind of agree with him…Have we been ruined for shorter distance rides??

QUESTION: How do you deal with road rage from drivers as a runner or cyclist?