It’s been awhile since I talked about how much I love and enjoy swimming. Even though I haven’t mentioned it lately, never fear–it’s something I will always do, even if I don’t write about it. My workout routine currently is as follows:  1 spin class, 2 cardio days with weight lifting and 2 days of swimming. The swimming is always there and always will be. I love it. It’s the perfect activity for sore muscles the day after a really hard weight lifting session. Swimming is the perfect activity after a long work week when I need to decompress.

If you are looking for some ideas on how to spice up your workout, give one of these swim sessions a try. You can shorten it or lengthen it depending on your abilities. Don’t be ashamed if you’re only doing 2 lengths at a time, or if you need to rest. We all start somewhere! When I first started swimming I was tired and out of shape and needed to rest after each length of the pool.

Here are three workouts that I alternate between depending on my mood and whether or not I’m swimming as a “recovery.” My recovery swims are slower because I’m sore. It feels so great to swim when my muscles are sore! And it’s even better when I can sit in the hot tub afterward.

Be sure to hydrate, hydrate, hydrate!! Swimming makes me really thirsty, especially if swimming in a salt water pool. I think the salt water sucks the moisture out of my body while I swim or something. I drink one water bottle through my hour long pool session and try to drink water when I get home too. Also, don’t forget to hydrate your skin after you clean up to prevent the swimmer’s “itch” (dry skin from chlorine).

As with every really hard workout, follow it with a hearty, healthy meal. My most recent swim session was Workout #2 and when I got home, Michael and I made homemade turkey burgers. What I love about turkey burgers is that they are tasty, filling and pretty low in calories. 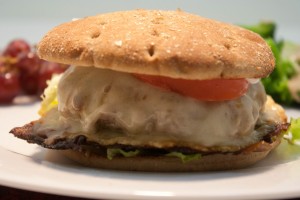 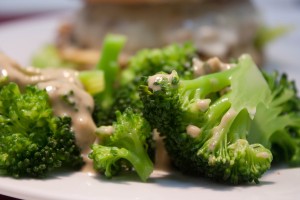 And I had some red grapes with dinner. And maybe….a glass of some other kind of grapes…. 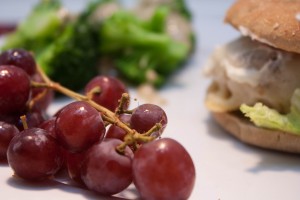 I’ve been adding some fruit to my meals lately, and not just having fruit as my snacks like normal. I liked having something sweet after eating my breakfast or dinner because I tend to want SWEETS. Eating some fruit with dinner makes it easier to limit the sweets I have for dessert. Win-win.

Swimming is how I lost 110 pounds and I firmly believe swimming is how I’ve kept the weight off. No matter what happens (injury, etc) I can always swim! If you’re on the fence about whether or not to try swimming, I say take the plunge. Give it a try. If I could dare to get into a swimsuit at 250 pounds, anyone can!

QUESTION: Are you a swimmer? What’s your favorite routines?

I definitely woke up on the wrong side of the bed Saturday. I woke up at 6 am–even though I didn’t have to get up until 8am. I was supposed to go trail running with a friend. I tried and tried to go back to sleep but I ended up laying there for two hours. My friend canceled because she wasn’t feeling well. I got up and decided to go for a run when I stepped outside to POURING RAIN.

I slammed the door shut and continued to rant and rave throughout the house. Poor Michael was in the kitchen hearing me throw a temper tantrum at the Universe that rivaled the tantrum of a two year old. There was swearing, there was shouting, there was massive frustration. I had no where to go. Mt. Scott–closed. Clackamas Pool–closed. Bike ride in the rain–no thanks. Bike ride on the trainer–NO! I’m going to be doing that all winter long, I don’t want to start now. Not having a gym to go to in the pouring rain makes staying fit in Oregon a challenge.

I decided to do a workout in the living room using the Nike Training App. I hadn’t used it in months and I had all the stuff I needed to get a half-assed workout in. I got out the free weights and the medicine ball and got to work. 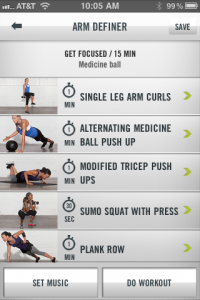 I started with the Arm Definer. It got my heart rate up and I was sweating but I was still unhappy with how my weekend was shaping up and I griped and complained the whole time. 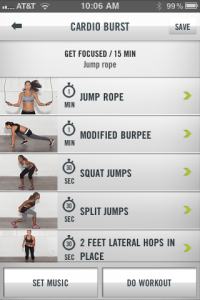 I switched to the Cardio Burst workout and that made me feel a bit better. I was starting to feel like I was getting a real workout in and my mood improved. I finished up with the Ab workout because god knows I’ve been neglecting my abs all summer long. 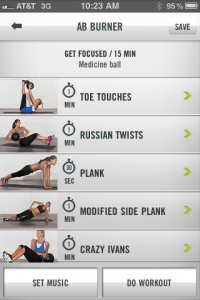 By this time my good mood was waning again. I was kind of done with the workout (mentally) and I was struggling to push myself any further. Some people can workout at home. I’m really not one of those people. I need a place. 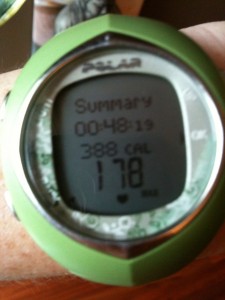 I saw that the rain had died down outside so I changed into my  old running shoes, grabbed a hat and jacket and headed outside. I ran down the street in the cold, damp morning toward the track. 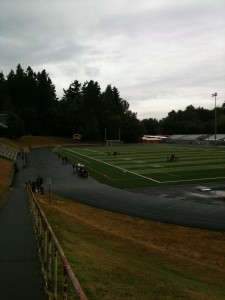 The rain came back steadily but I was committed to running by that time. There was a kid’s football game about to start but I didn’t plan on running for very long. There were two other people running the track. 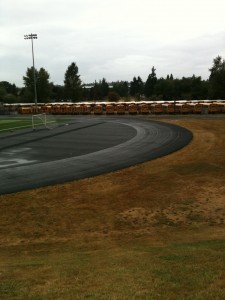 Having a hat helps when running in the rain. It’s not QUITE as miserable. I know I shouldn’t complain–it’s just rain after all. But I cannot tell you how much I despise the rain. As I ran the track I grumpily whined inwardly about how “this is what the next 8 months look like”. I seriously dislike the long, gray, gloomy, rainy winters in the Northwest. 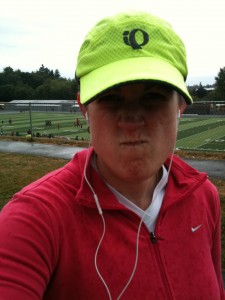 By my last lap it started to hail. I said out loud to myself “SERIOUSLY?!” and then headed home. I’d had enough. I workout because I like it. I shouldn’t be miserable when I workout–it makes me less likely to continue doing it! 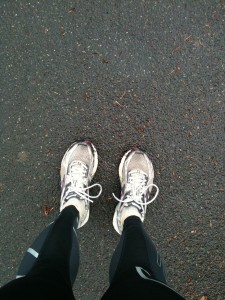 Every step was miserable because my shoes and socks were soaked. I was so glad I’d grabbed my old pair instead of my nice, new, clean running shoes! I got home and stretched. I killed my legs on the Foam Roller and then showered–grumpily. 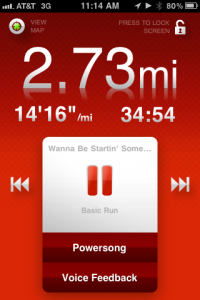 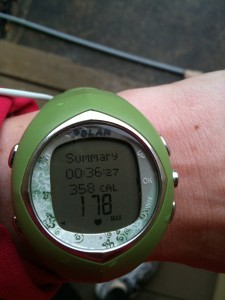 Running usually makes me feel better no matter how bad of a mood I’m in. This time? It was a miserable run. I got out of my soaked clothes–thankfully it was laundry day. I ran a bunch of errands and did cleaning the rest of the day, then I headed to Cost Plus World Market. I was told they had cute business card holders. It’s funny–every single time I go to World Market for one thing I leave with at least 5 things I don’t really need. 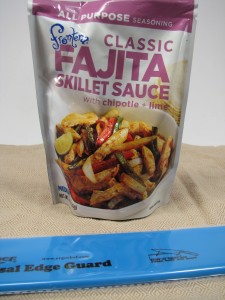 I got a package of fajita sauce and a Universal Edge Guard for when we go camping. I didn’t even know I needed that. 🙂 But when we went camping a few weeks ago we just wrapped our sharp knives in a towel to take with us. 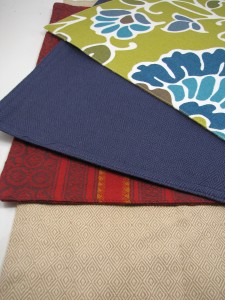 I also got some new placemats. Yes I am weird, only buying one of each. They did NOT have business card holders but I left with 7 items and $18 spent. This was the final last minute purchase: 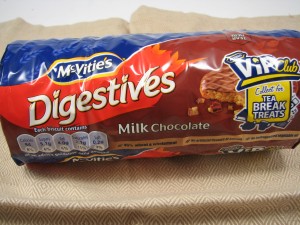 DIGESTIVES!! I remember going to London with my cousin Anna when I was 18 and our hotel room had Digestives. We were soooo confused! Were they crackers? Were they laxatives??? We were too nervous to eat them for a few days and then finally gave it a try and they were good. I haven’t had them since then–almost 14 years ago. I cannot wait to try one of these. Despite my crappy day, the highlight was definitely Cost Plus Market and finding THIS on sale: 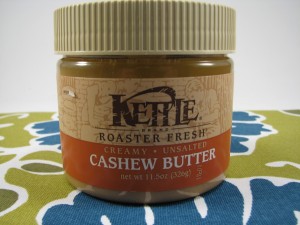 Finally! I’ve been checking for months, waiting for this very expensive product to go on sale and it finally did. I cannot wait to make my favorite soup with this. That’s definitely;y something to look forward to. Michael got home late from golfing and we made turkey burgers. It was so nice to have an old favorite return. We haven’t had any ground turkey from Costco for most of this summer so no turkey burgers. 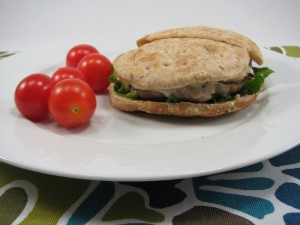 As a side we had some tomatoes from the garden. The turkey burgers were on sandwich thins. It really hit the spot. 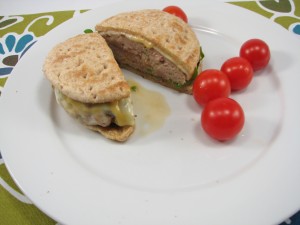 After we ate dinner and watched an episode of Breaking Bad, Michael started to entice me with the idea of getting donuts. After the day I’d had, he didn’t have to twist my arm very hardly. We trekked to Krispie Kreme. 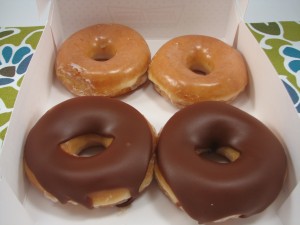 I had one and it was amazing! I crashed into bed and after the day I’d had, I was asleep immediately.

QUESTION: How do you reverse a grumpy mood? When was the last time you had a really bad day?