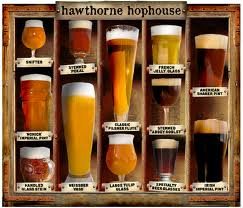 Friday night I headed to the pool and went for a nice, long swim. My legs are finally back to normal after the Crossfit workout last weekend. I enjoyed swimming, and this time didn’t wear my Heart Rate Monitor. I knew that I was burning about the same amount of calories as the last few times (400) based on the intensity of the workout and the time I did it in. I really only use the heart rate monitor in the pool to “check in” with myself on occasion.

After swimming I got changed and went out to dinner with my good friend Erika! We went to the new restaurant and pub called the Hawthorne Hophouse. It had really good reviews online.

It was a cute little hole-in-the-wall on SE Hawthorne (a very trendy area of town). I was expecting it to be super crowded and busy since it was a Friday night but we got seats with no problem and honestly it wasn’t that crowded. I was surprised there were empty tables.

Erika and I got a private table and we were able to catch up. I wasn’t sure what beer I wanted to get so I had a few samples.

That was a little tiny shot glass sample of an Pale Ale. I think it was Cascade Brewing Company but not sure. I don’t remember which beers I had now. I sampled a few and then decided on one of the Pale Ales. I guess the keg blew half way through my pour so the waitress gave me a half beer for free. Free is good!

The waitresses were all really nice and friendly. I liked the service we got there a lot. I was hungry after my swim so I ordered dinner. I was GOOD and skipped the Mac n’ Cheese, even though it sounded really good, and got the Pub Sausage. Beer braised sausage sliced thin, sauerkraut and stone-ground mustard, served on a freshly baked ciabatta roll. I had the option of substituting the fries for a salad and even though it was a hard decision (I kinda wanted those fries!) I made the right choice.

It had caramelized onions and melted cheese on the sandwich. It wasn’t anything fancy or complicated but it was delectable! I enjoyed the sandwich a lot (despite it arriving a crap-ton of calories with the bread). The salad had a vinaigrette dressing. I ordered another beer. This time it was “A Little Sumpin’ Sumpin’ Ale” from Lagunitas. It was delicious! Red and hoppy but not too strong. Erika didn’t like it but I ended up ordered a second one (in a smaller glass).

The beer was good. I would like to return there sometime and do a beer flight to sample a few different ones. Erika and I were at the restaurant from 7:30 until almost midnight! I am such a lightweight now that 3 beers in 4 hours gets me drunk! But it was nice to kinda let loose and just hang out with my good friend. We can talk for hours. We talked about a few other restaurants we want to try this summer because they have outdoor seating. It will be fun to be able to ride our bikes to the restaurant!

A quickie post, because Michael and I are heading out to do some biking and hiking today! I had a nice night with a friend, a good swim, yummy dinner and it was a great start to a good weekend!