Seen From the Bike 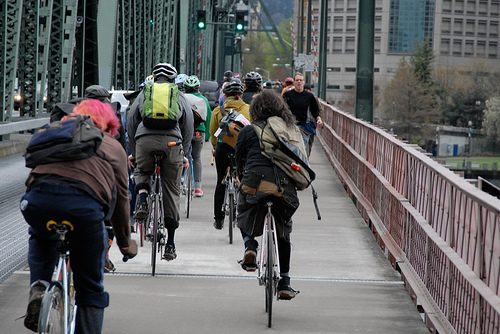 Tuesday I commuted to work again by bike! I got a little bit of a later start, running about 10 minutes behind but it didn’t end up effecting when I arrived at work too much.

The weather Tuesday morning was “iffy”. It was overcast but warmer than last week. It was that weird in-between temperature where it’s too cold to NOT wear warm gear, but a little too warm to wear it. I was pretty warm and sweaty as a result.

I parked in Sellwood and set out on the bike. The Springwater Trail was much quieter than last week as well.

I only stopped twice to take some photos along the way. My time was much faster and my ride was a lot easier too.

There was a Detour for part of the Trail because of construction. I had to go down Water Avenue, passed OMSI, instead of around it on the trail. Then I picked up the trail again and got ready to cross the Hawthorne Bridge.

The Hawthorne Bridge is the scariest part of the commute honestly. There’s TONS of cyclists, runners, walkers, people with strollers, homeless people with carts…it’s completely chaotic and a lot of the cyclists are total assholes–trying to go super fast and pass people when there’s just not enough room. It’s probably the worst part of my commute.

I rode up the Westside Esplanade and then turned off the trail and onto downtown streets. Luckily there’s only a few blocks that I have to go and there are bike lanes. The bike lanes in downtown Portland are a little weird: they are often in the center of the street with cars on both sides. Plus there’s neon green paint on it.

I arrived at work in less time than last week.

I felt really good about my second attempt!

The afternoon was sunny and lovely. I decided to learn from last week’s commute home and leave all my warm gear at the office to get the next day. The less I have to carry the better!

I discovered a new way to get home. I rode over the Morrison Bridge just like last week but this time, instead of going down the ramp onto the East Esplanade trail, I just continued on the bridge.

On the other side of the Morrison I reached Water Avenue–which has wide bike lanes. I took the bike lanes passed OMSI and all the way to the Springwater Trail, avoiding the crowds. I might try this route in the morning too to avoid the Hawthorne Bridge completely.

The weather was PERFECT. I was glad I left all my warm clothes at the office. I rode along, feeling great.

Hot and Sweaty! I got back to the car in no time and packed everything up to go home.

I’m surprised that the ride home is always faster and easier. On the way home I scouted out other routes I could take, parking further away. Michael commented that he felt a difference yesterday on the bike compared to last week. He attributes that to being 6 pounds lighter. Way to go!

When I got home, Michael and I spent the next few hours working in the garden. We lined the sides of the raised beds, mixed the new and old soil and pulled weeds. We worked until 8pm! I think we’ll be planting a little bit this weekend!

QUESTION: What should we plant in our gardens?

Why All or Nothing Doesn’t Work For Me