On Sunday night I met up with a friend for dinner because we had a lot of catching up to do! We met at Oaks Bottom Pub in Sellwood because they had a happy hour that ran until 6pm. Michael was out at a concert that night and it was nice to get out of the house and have some girl time. I’d spent most of Sunday cooking for the week and then watching episodes of West Wing on Netflix.

I’d been craving a BLT sandwich for a few weeks and decided to get that instead of something off the happy hour menu. It came out and it was a LOT bigger than I was expecting and it was also fried. But oh well, it was delicious. It had slices of avocado on it and melted cheese and that made it amazing. Glad I got the salad as the side! 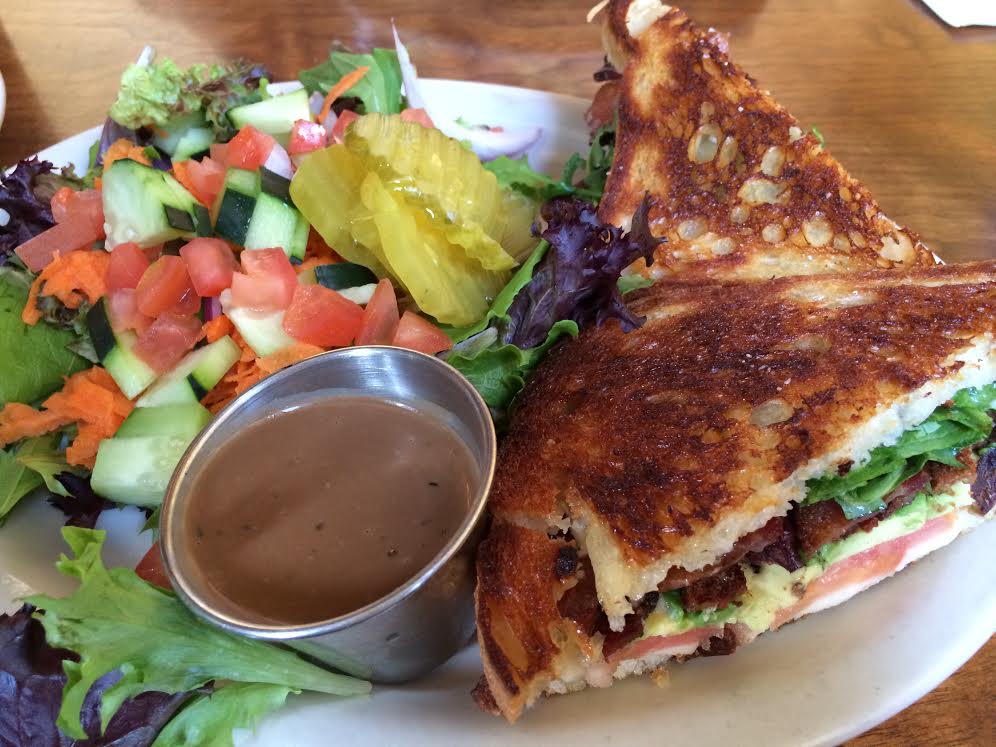 Erika got the sliders from the happy hour menu and an order of tots. Their tots are pretty good (and they also have something called “Totchos”–basically nachos made with tots). I had a few of her tots but the sandwich was so big I didn’t have much. 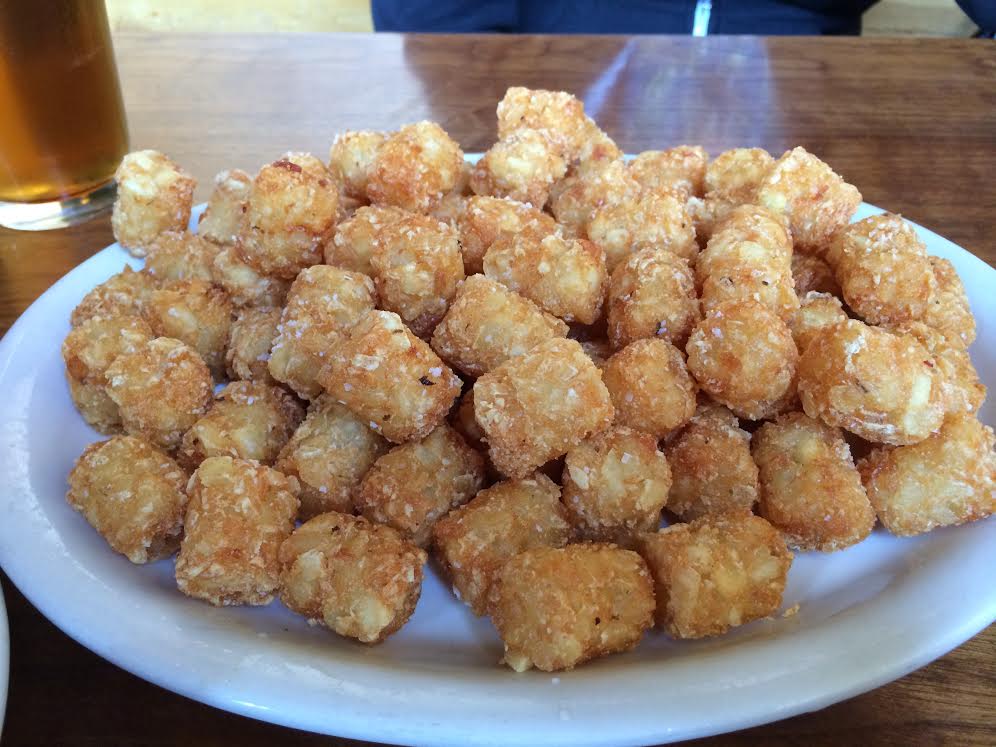 Kind of a massive amount for happy hour! We both got a beer but stuck to just one. Partly because I’m trying to limit my liquid calories and also because I’m not a huge fan of their beer. I got the seasonal IPA and it was ok but not great so why waste my calories?

It was such a nice night and our happy hour excursion turned into a 3+ hour gab session. It was good to catch up; we’ve both had a lot of stuff going on lately. I suggested that when the weather is a little nicer she meet me somewhere to walk Bella. I’m always up for a walk! As long as it’s not raining. 🙂

I’d planned on prepping some dinner to go into the crockpot Monday morning but my dinner date Sunday went late. By the time I got home, I just wanted to cuddle with Bella and Fat Kitty in bed and read a book (Maya was under the bed, as per usual). So Monday night when I got home from work I decided to make a quickie soup for dinner.

I wish I was one of those “throw everything together in a pot and it tastes fantastic” kind of cook. I’m a recipe follower. I need actual measurements and instructions. I guess I’m just a really literal person when it comes to the kitchen. That being said, I did kind of “throw things together” on this one. Originally I wanted to make the Pasta Y Fagioli Soup “recipe” that Michael’s mom gave me a few months ago. We’d gone over there for dinner and she made this fantastic soup! But she’s a “throw everything together” kind of cook and this is what she gave me:

I thought, ok I can give this a try! I can WING IT (yeah right). Except I went to make the dinner and didn’t have any canned beans. I ALWAYS have canned beans. How am I out?!? Nothing but black beans and that kind of changed the whole recipe. So I made something similar to this recipe minus the beans, Also, the only pasta I had besides spaghetti was gluten-free fuselli. I honestly didn’t care that it wasn’t the right pasta. I’m not a stickler. Pasta is pasta to me. 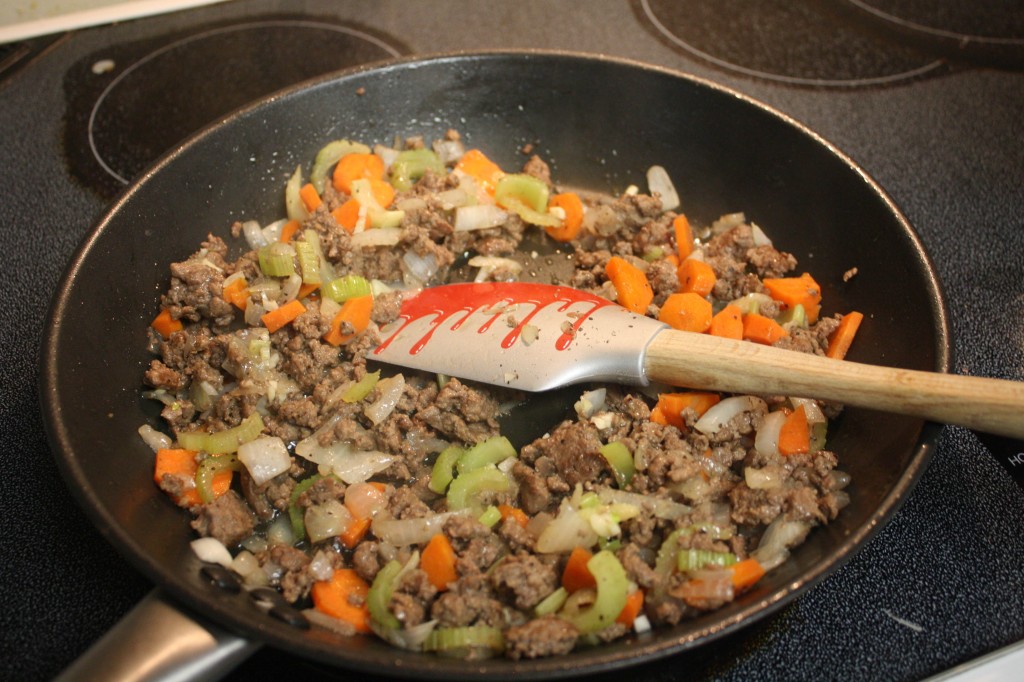 I browned half a pound of beef (it was left over and needed to be cooked) and halved the rest of the recipe. Minus the beans. I let it simmer for about 45 minutes on the stove. I cooked the pasta separately and then added it to the soup mixture about 10 minutes before it was going to be ready. I also baked some biscuits–you know, the kind that come in a tube? It’s been probably 8 years or so since I had them and was craving it so I got it. They were surprisingly low in calories. A serving was 3 biscuits for 160 calories. Not bad! 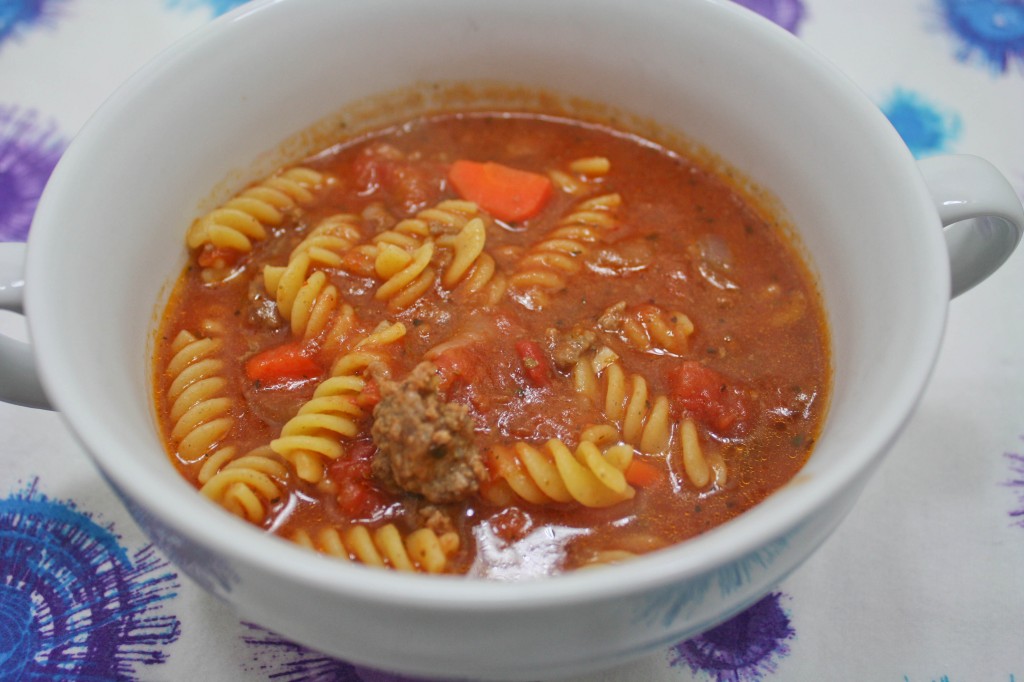 With my throwing things together, I actually got 5 servings out of the dish and that made it 271 calories for 5 servings. If it was half of the original recipe at 4 servings it would be a little higher but still pretty low. 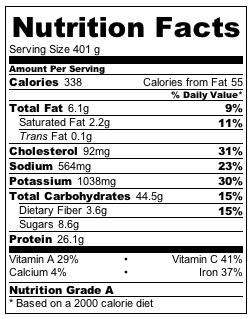 Michael was a big fan of the soup. I was too. It was delicious and hearty. The kitchen smelled delightful! I would most definitely make this recipe again with one minor tweak — it needed more fluids! Since I was omitting the cans of beans (which the original recipes I consulted said to include the liquid in the beans) there was less fluid. I think I’d add some beef broth or maybe some water. 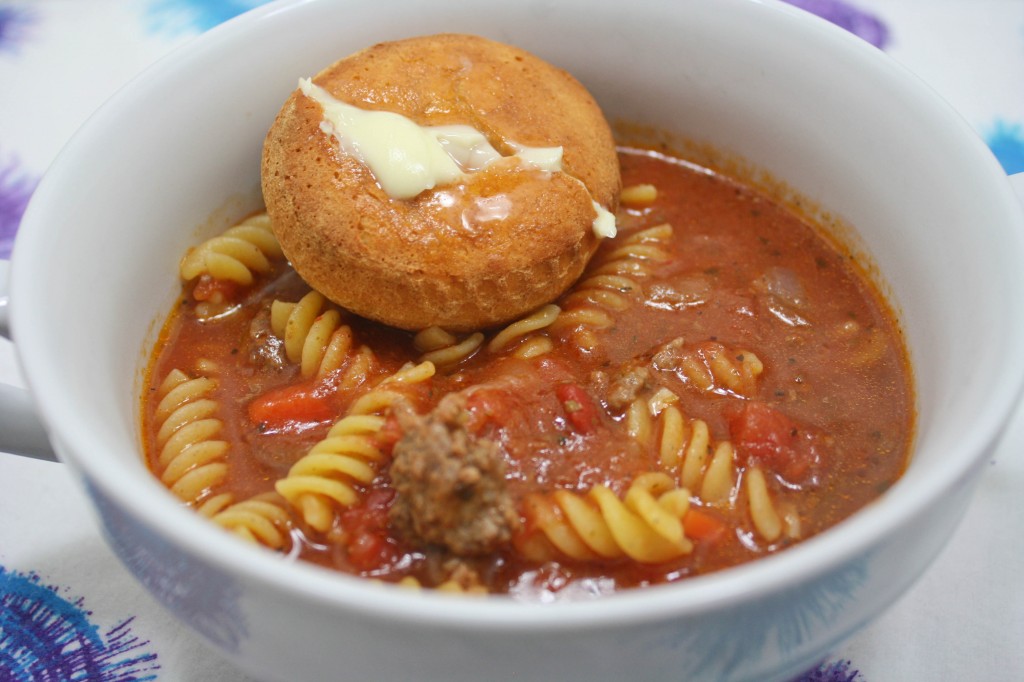 Despite not being “soupy” it was still delicious and I loved the flavors. And the biscuit. 🙂