Today is a pretty special day for me.

On September 22, 2006 I started a life changing journey. I stepped on the scale at 250 pounds and decided I’d had enough.

I had reached my goal of losing 100 pounds! It was one of the happiest days of my life. I’d been determined to lose the weight. I saw immediatel progress and that inspired me to keep trying to lose weight.

I had set backs. I experienced many plateaus in my journey. I clocked in too many hours to count at the gym. But I never regretted a single moment of it. 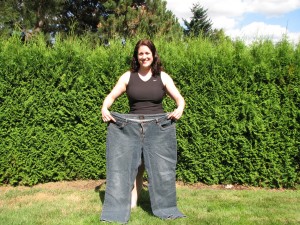 These two pictures were taken over the weekend. I wanted to update my “Fat Pants” photo. Those pants are a size 24W–the largest I ever wore. 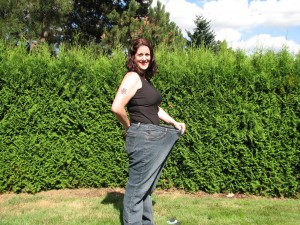 Putting those old jeans on this weekend was awkward and weird. Not only that, I had Michael take the pictures of me. I felt vulnerable stepping back into those 24W pants. And it was weird for Michael to see them (for me). He never knew me at 250.

But I did it all on my own. I counted calories religiously every day. I wrote them down by hand in a small notepad. Eventually I upgraded to an iPhone App that tracks my calories and exercise.

Now, two years later, I am still weighing in at 150–100 pounds less. I’ve had some ups and downs in those two years, but I feel like I can confidently say, “I lost the weight and kept it off.”

My hope is that this blog and this post inspires other people to lose weight and get healthy.

Here’s to another year of weight loss! 🙂