I can cross off one more goal on my Summer Bucket List! Over the weekend my cousin Anna and I did a kayaking tour with Alder Creek. It was only $39 each so that wasn’t a bad price for a three hour tour. We chose the Ross Island Tour:

“Go paddling in your backyard! You can even ride your bike to our new location to make it a no driving recreational day! We will leave from the Boat House dock along the Eastside Esplanade near SE Water and Clay and explore the backwaters of the Willamette River between Ross Island and Oaks Bottom Wildlife Refuge.

Launching and landing from a dock

Scenic views of the city to start

Enjoy a little help from the current on the way back.”

Sounded good to me! I definitely wanted a beginner tour since I’ve only done this once before. That first time was kind of impromptu and I wasn’t very prepared for it. This time I was more prepared. I remembered being uncomfortable in what I was wearing (everything got wet). So this time I wore a swimsuit underneath shorts and a wicking sports t-shirt. I brought a hat, sunscreen, chapstick with sunscreen and aqua sox. Remember those things? LOL! I didn’t know they still existed but I found some on amazon and got them for the honeymoon. I figured this was the perfect time to test them out. 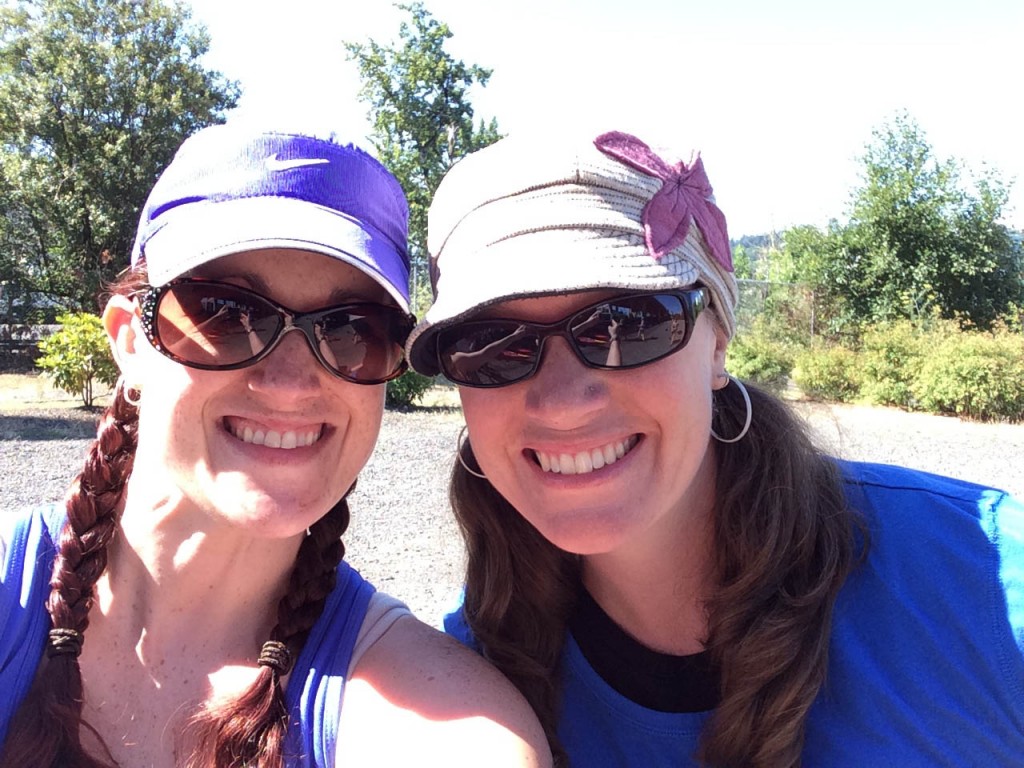 I also brought a change of clothes and a towel for after the tour. I brought a bottle of water and some snacks (a banana and a protein bar). I also bought a waterproof iPhone case so I could take some pictures on the trip. The guide instructed us how to get into the kayak from the dock. It’s a LOT harder than you think it would be. I definitely struggled with this part. 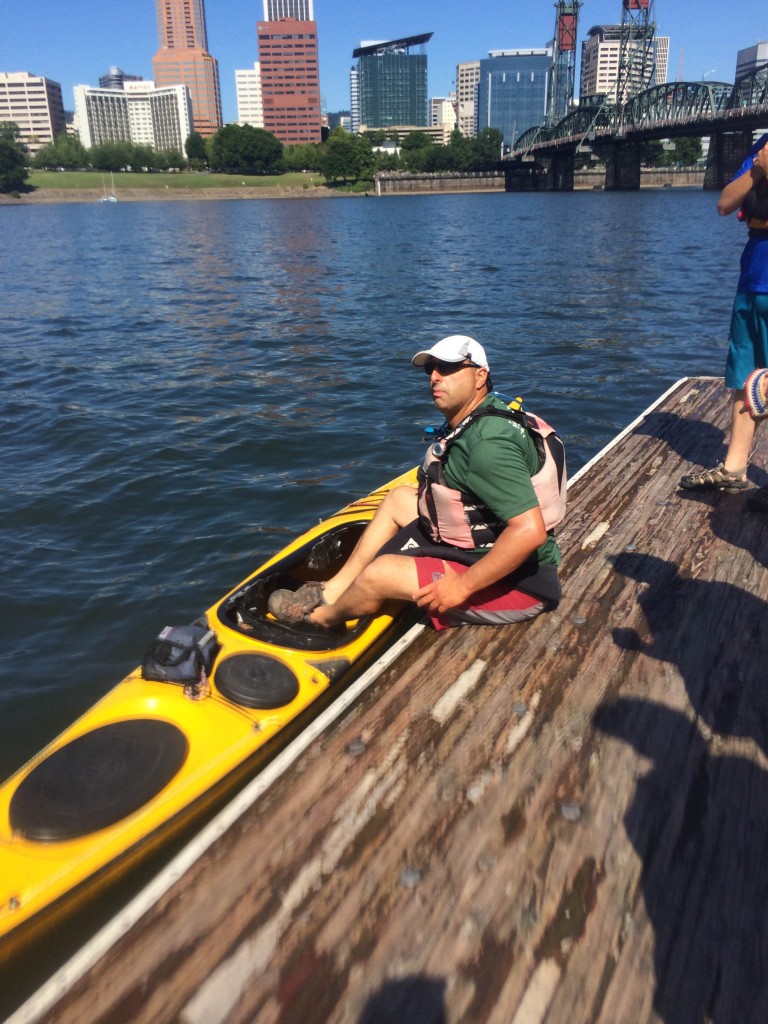 We all got into the kayaks and then kind of floated on the current and waves while he talked a little bit about our route. I’ve always wanted to try a sprint tri and swimming would be my strongest part of the race–but open water swimming is what has kept me from ever trying it. I know, I know, open water swimming really isn’t that scary and I used to do it as a kid all the time. When did fear start keeping us from doing stuff??? So yeah, getting in the kayak and feeling it wobble around with the waves and feel uncertain and unbalanced was a little scary. 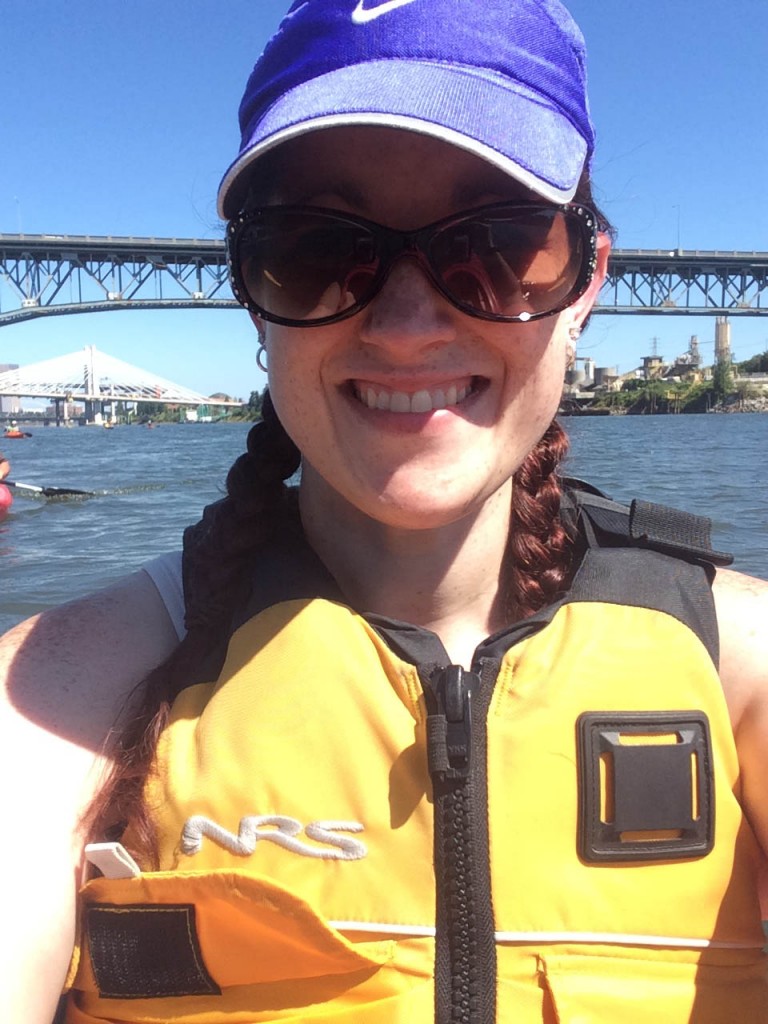 I did not feel confident in the kayak and the river suddenly felt very big. We were out on the water by 10:30 and there weren’t a ton of boats out there yet, just a few. But whenever they went by I felt very vulnerable because they were much bigger and caused big waves. When the waves came I just stopped paddling and let it take me wherever for a moment, then start paddling again. 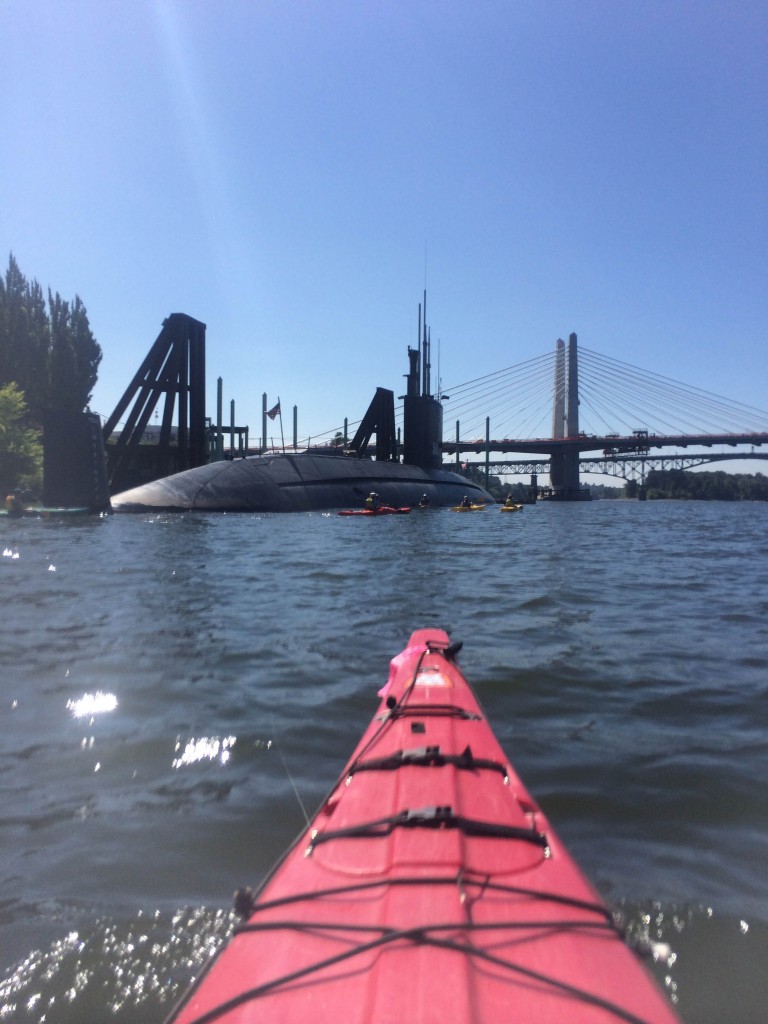 We paddled over to the submarine by OMSI and then went underneath all the bridges towards Ross Island. I’ve never been to Ross Island and was excited about seeing it. I had hoped that we would go onto the island and check it out but alas, we just paddled past it. Part of it is a bird sanctuary. We actually got to see some giant herons AND a few bald eagles! That was kind of crazy. 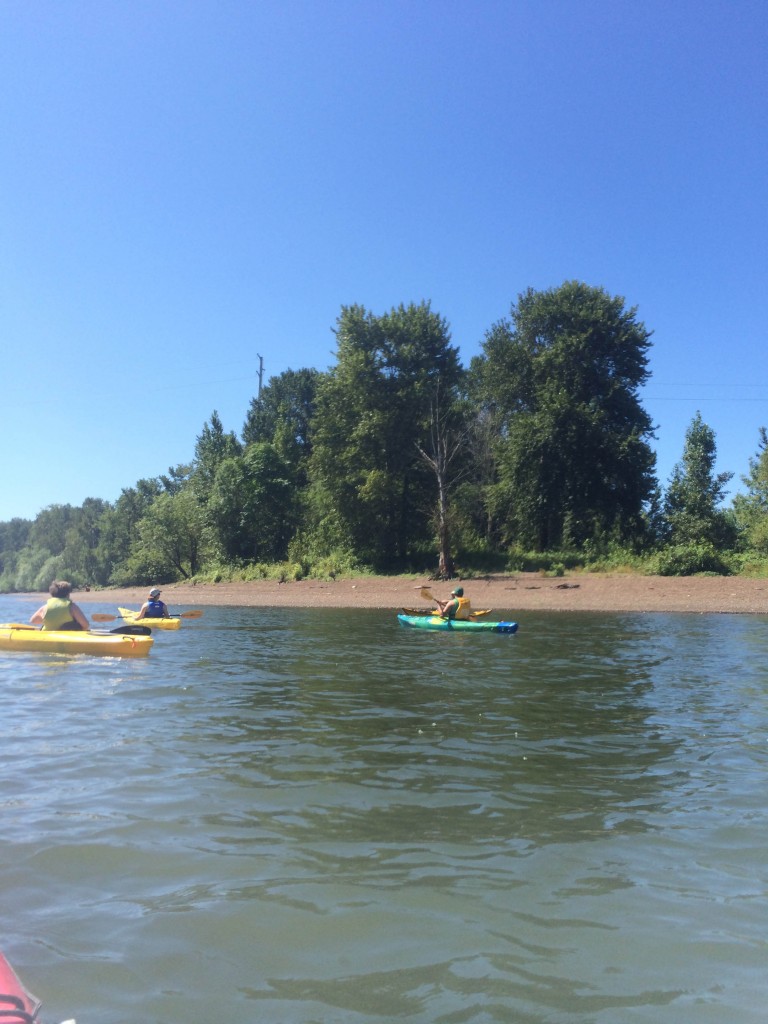 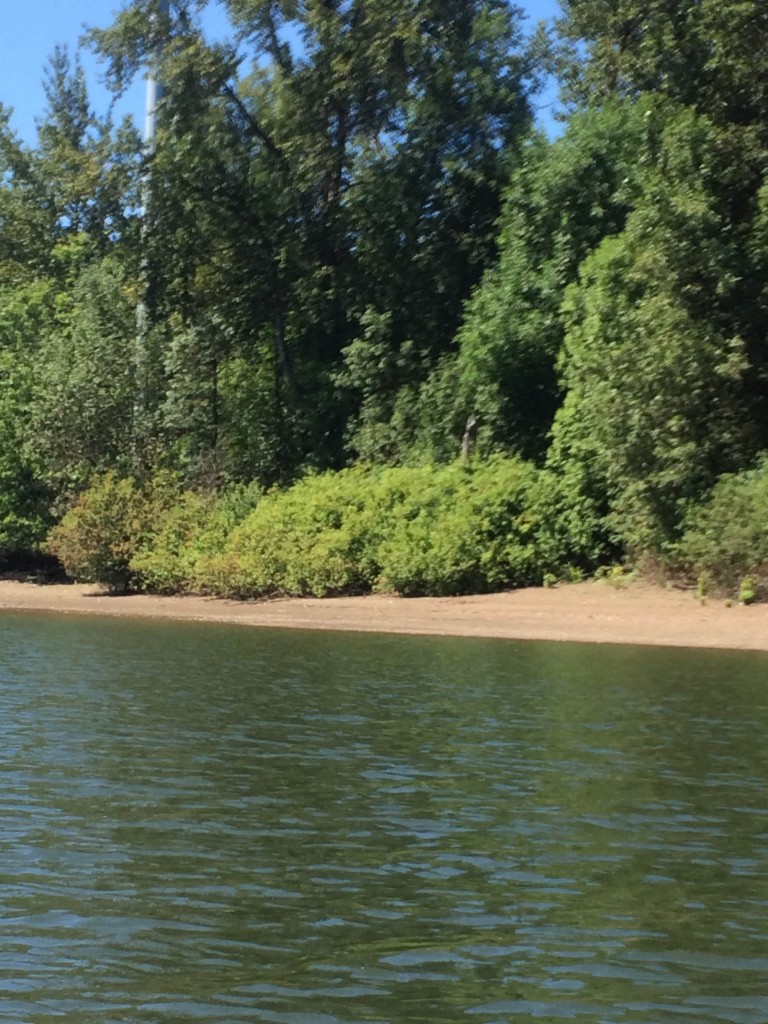 This part of the trip was my favorite part. The waters were very calm, the river narrowed as it went around the island, and there weren’t as many boats. We saw a bunch of other kayakers, some dragon boat teams practicing, and also a BUNCH of SUP people! That looked like so much fun. It also looked like a lot of work and like it requires something I don’t really possess–balance.

I put on a lot of sunscreen before we got on the water and I reapplied a little bit around this time because I was starting to feel my face burning a bit. It was hard–my hands were slimy and that made the paddle harder to use (note to self: bring the spray-on sunscreen next time). Even though I put on a lot of sunscreen, I still got a little burned on my shoulders AND afterward I found a spot I missed: the top of my hands. Doh! 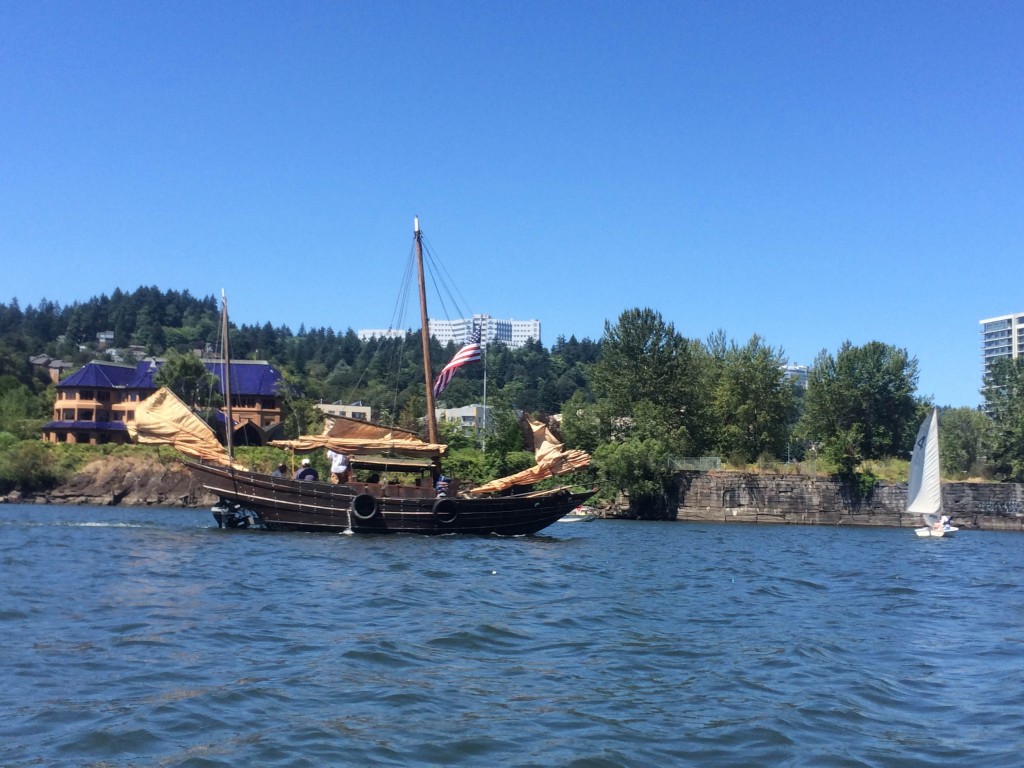 We kayaked around Ross Island and turned around to head back. This part of the river had a ton of boats–mostly sailboats AND a pirate ship!! That was way cool and I wanted to get a closer look but this was as close as we got. Here is Anna paddling in front of me: 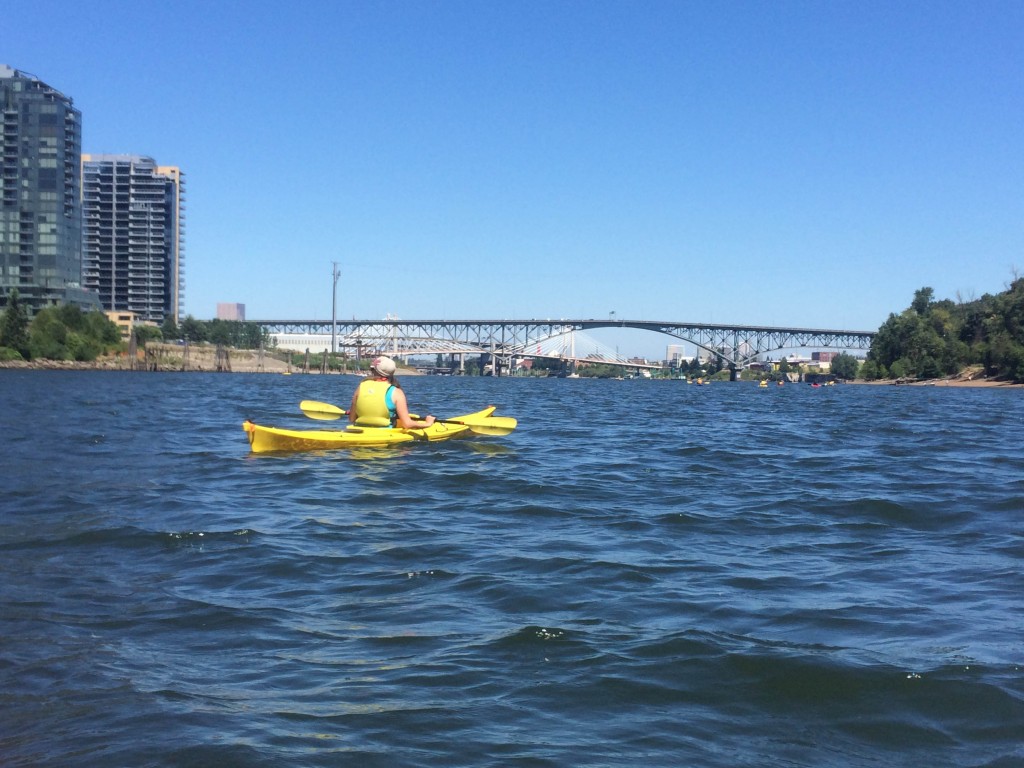 By this time I was feel more confident in the kayak and being out on the water wasn’t making me as nervous as it did at the start. We went by the new-ish OHSU high-rises and fancy condos on the waterfront and went underneath the new pedestrian/bike bridge they are building (which looked kind of ugly at first but now it looks like it’s going to be pretty). 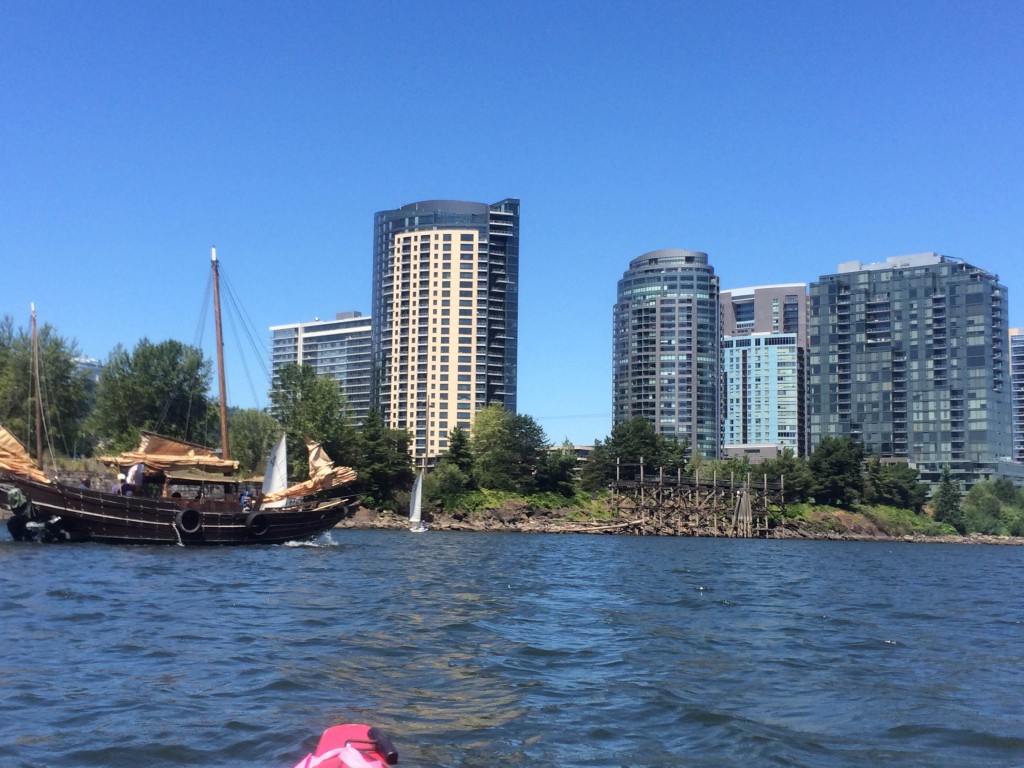 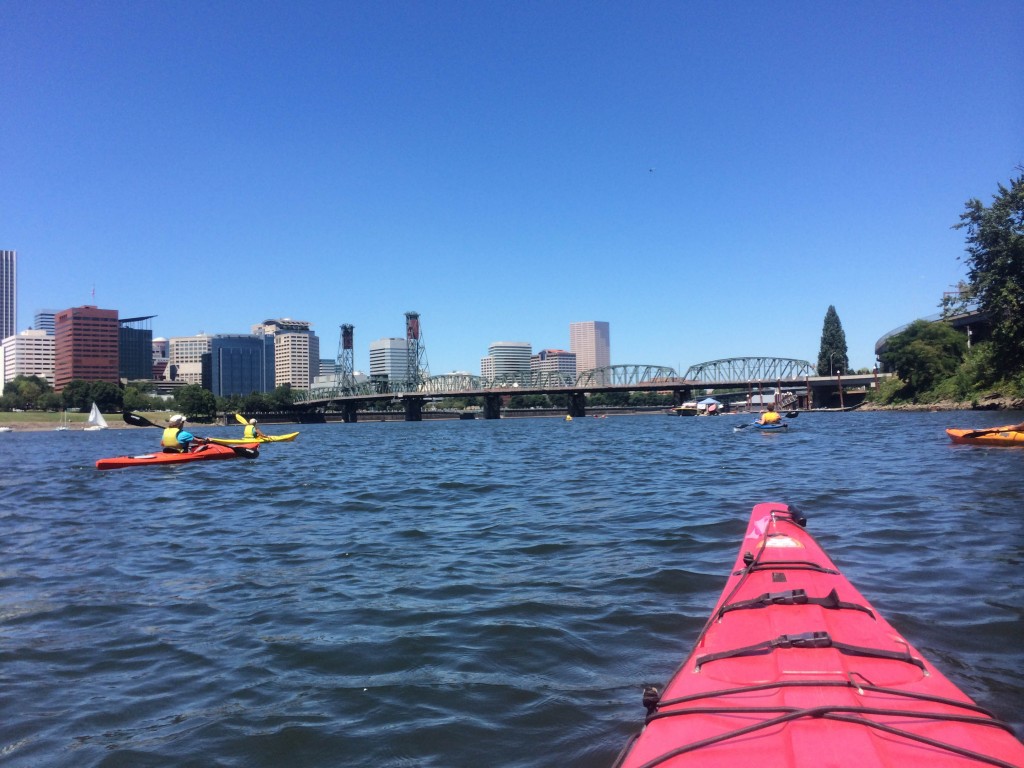 At this point we’d been kayaking for about 90 minutes. I was definitely feeling fatigued around this time. Mostly in my forearms and hands (I was gripping the paddle too tightly) and also in my low back. I tried to adjust how I was sitting a few times but that made the boat very wobbly so I tried not to do that very often. This is another reason I think stopping on Ross Island would have been a good thing–getting out to stretch for a few minutes and not sit in the same position for hours. 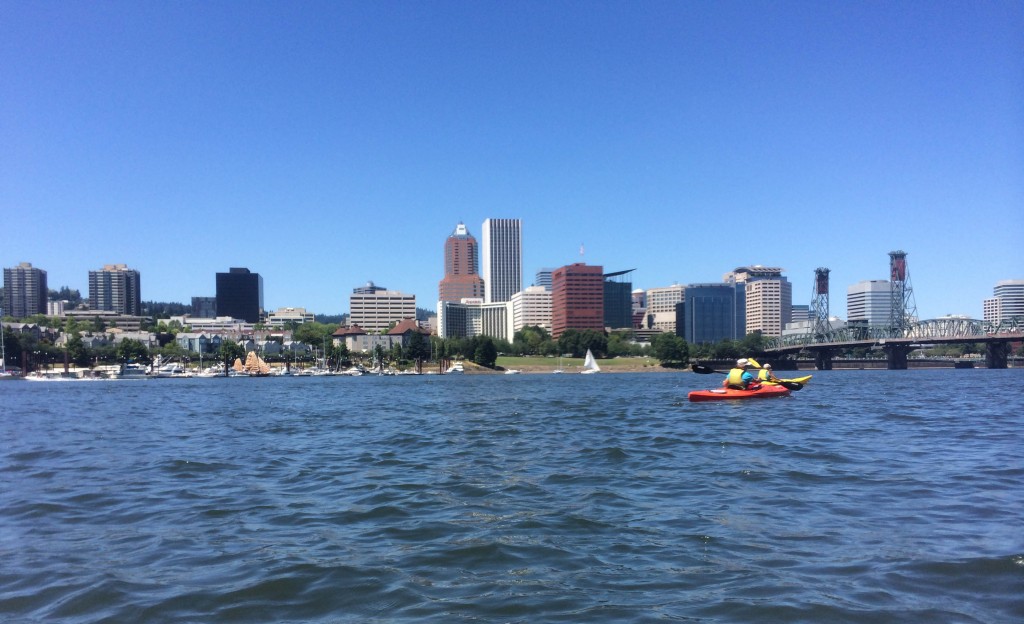 The sun was out, people were partying on boats, the Portland Spirit Cruise boats were going by and there were the jet-boats too. It felt like rush-hour traffic out there! The wake was huge at this point and paddling got more difficult. I was pretty happy to see the dock off in the distance! 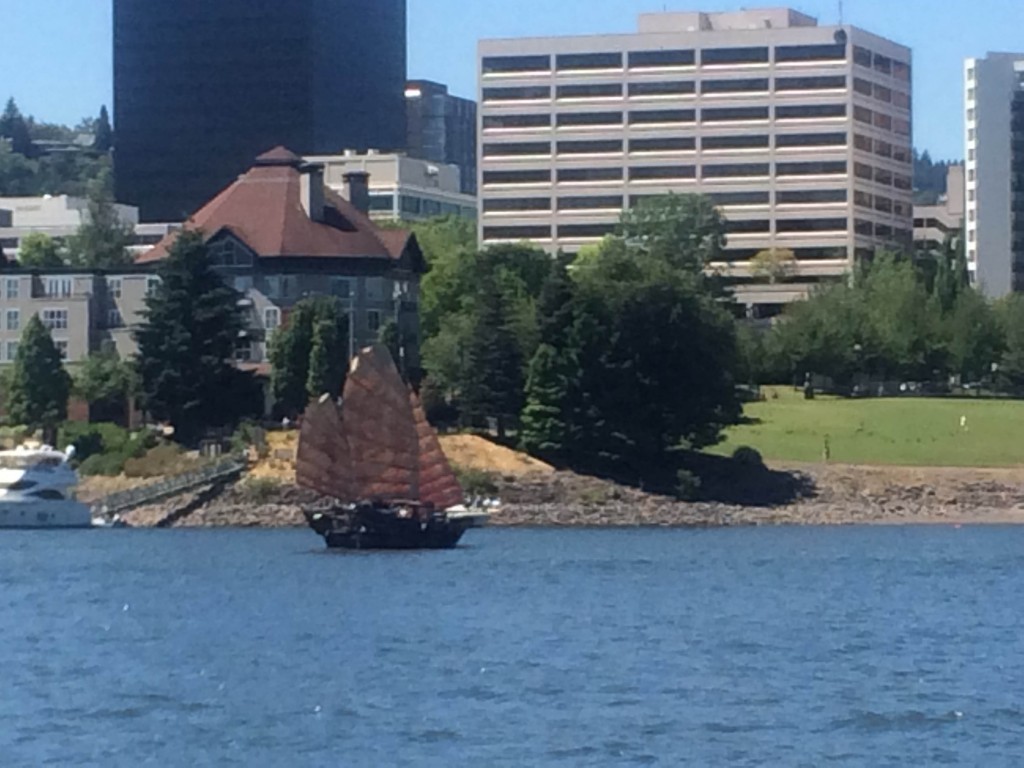 As we were approaching the dock I saw the pirate ship! It had it’s sails up! It looked so cool and kind of reminded me of the boat in the Goonies. 😉 We got back to the dock and everyone helped each other to get out. The trick was having people hold onto the ends of the kayak, put your hands on the deck and kind of thrust yourself out–kind of like a beached whale. It was such a strange sensation getting out of the kayak onto the dock. Anna said the same thing, both of us had jello legs. That was so weird! How about these calories: 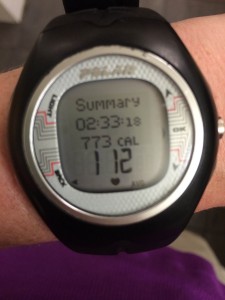 I ate my banana and we helped take some of the kayaks back up to the parking lot (there was another tour after us). The shaky legs finally went away (maybe 5 minutes later). Anna and I went into the bathrooms to change out of the damp clothes and then we got lunch! I was famished! 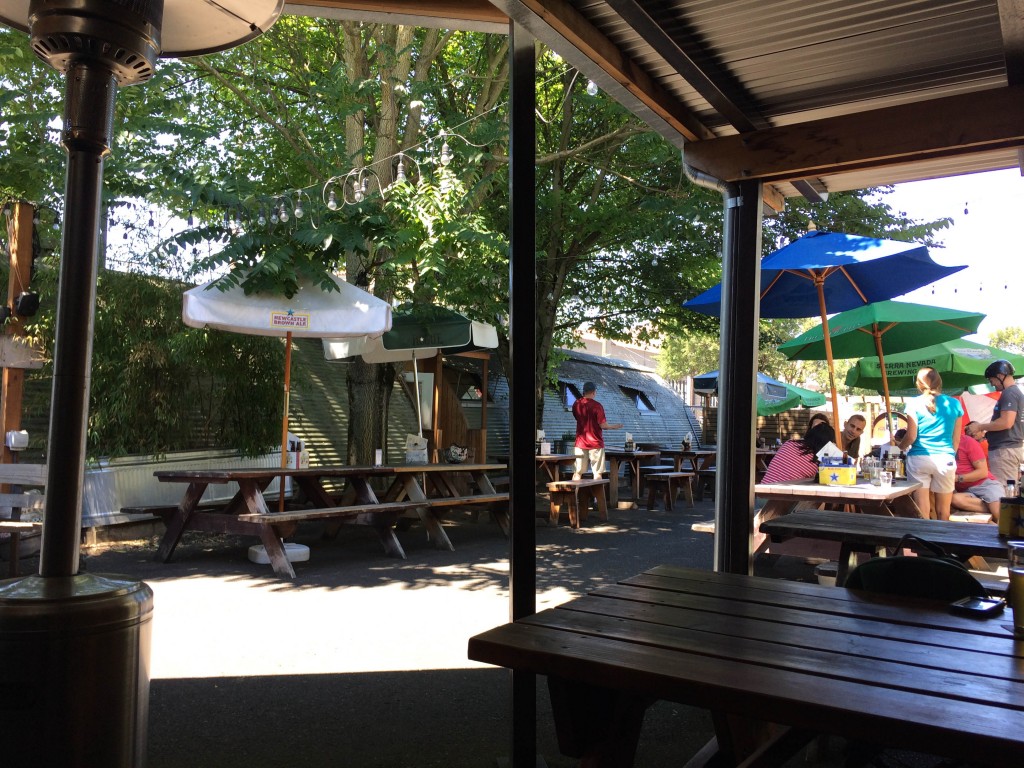 We went over to the Green Dragon. It’s a place I’ve wanted to try for awhile and I’m glad I finally did. They had a humongous outdoor, partially covered area.  I ordered the Boneyard Diablo Roja beer and Anna got some kind of ginger beer. Anna got the mushroom burger and I ordered the pulled pork sliders. 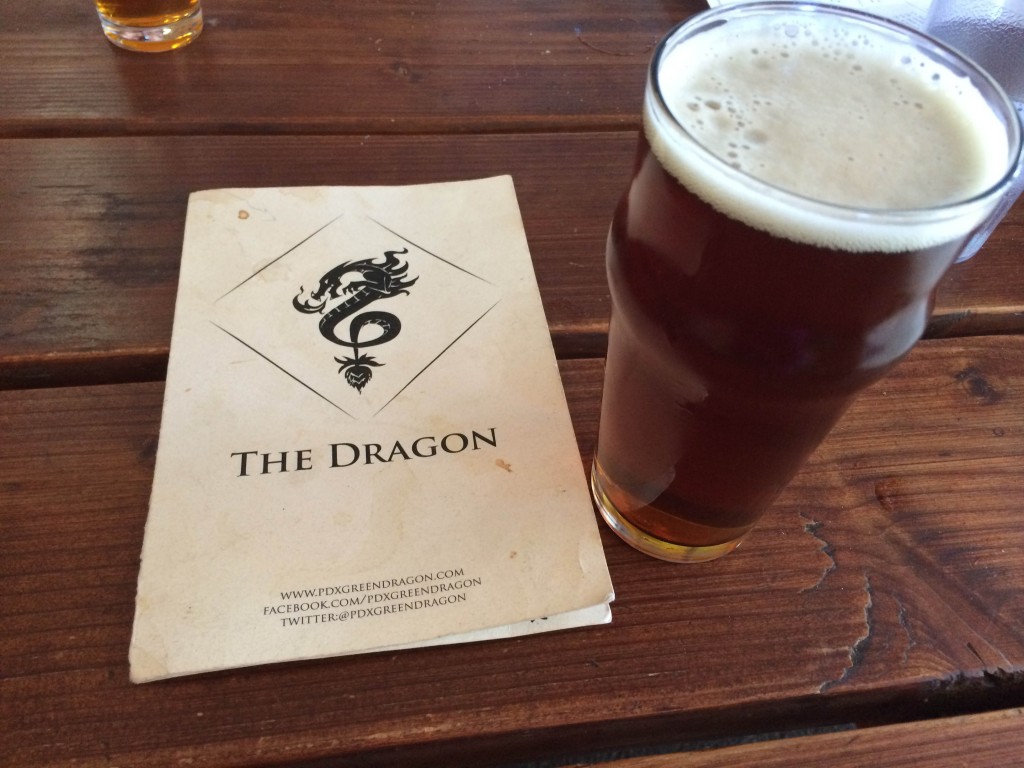 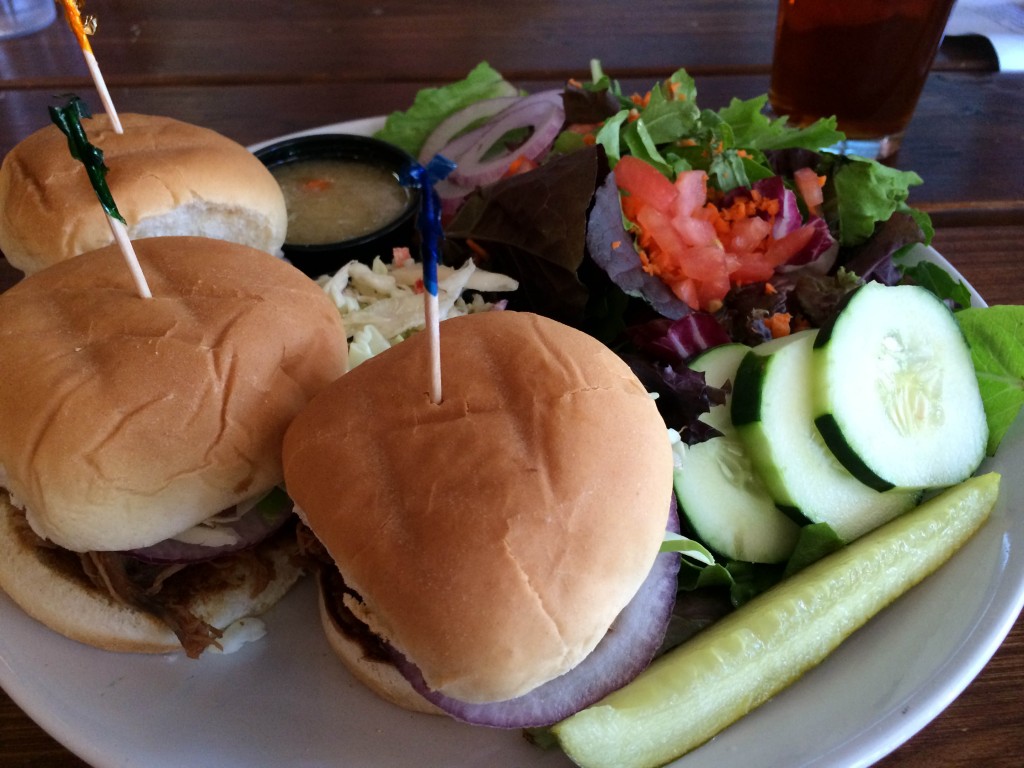 The food could not come fast enough!! So freakin’ starving. The sliders were fantastic. Loved the flavor of the pulled pork. I had a side salad with it instead of fries. I tried their IPA vinaigrette dressing because it sounded really fascinating but I didn’t like it. It didn’t really taste like much; so I got some Ranch dressing instead. Lunch was great and after I felt like I could totally take a nap! It was a fantastic day!!