My day started with a run. It was going to be a nice day, and a hot one, but I was out early enough that it wasn’t terrible. I laced up my shoes, slathered on the sunscreen, and walked to the neighborhood school track. There were three other runners out there with me that morning. It was quiet and peaceful and I have to admit–it was kind of nice to just run and not have a goal. Training for my 5k was fun and I was so happy I was able to do it, but every run that I did the closer I got to the date, added pressure to myself. I just couldn’t enjoy it like I used to because all I could think about was how I hadn’t trained ENOUGH, or I wasn’t fast enough, or there’s NO WAY I could run the 5k without having to walk… 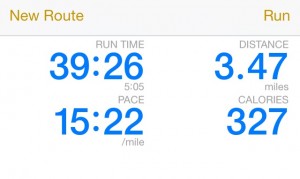 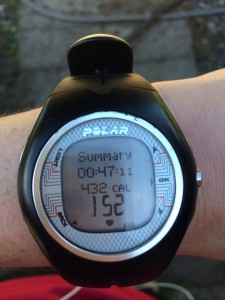 In the end, I really hadn’t trained enough, I was slow –who cares?– and I did have to take walk breaks. But I still finished my 5k and RECOVERED from it, too. So I’m happy about that. And now when I run, there’s no pressure and no expectations. I just ran until I felt like I needed a walk break, then I ran some more. It was a really nice run!

After that I got cleaned up and Michael and I packed up some provisions before heading out for our day. The plan: meeting friends at Kelley Point Park! 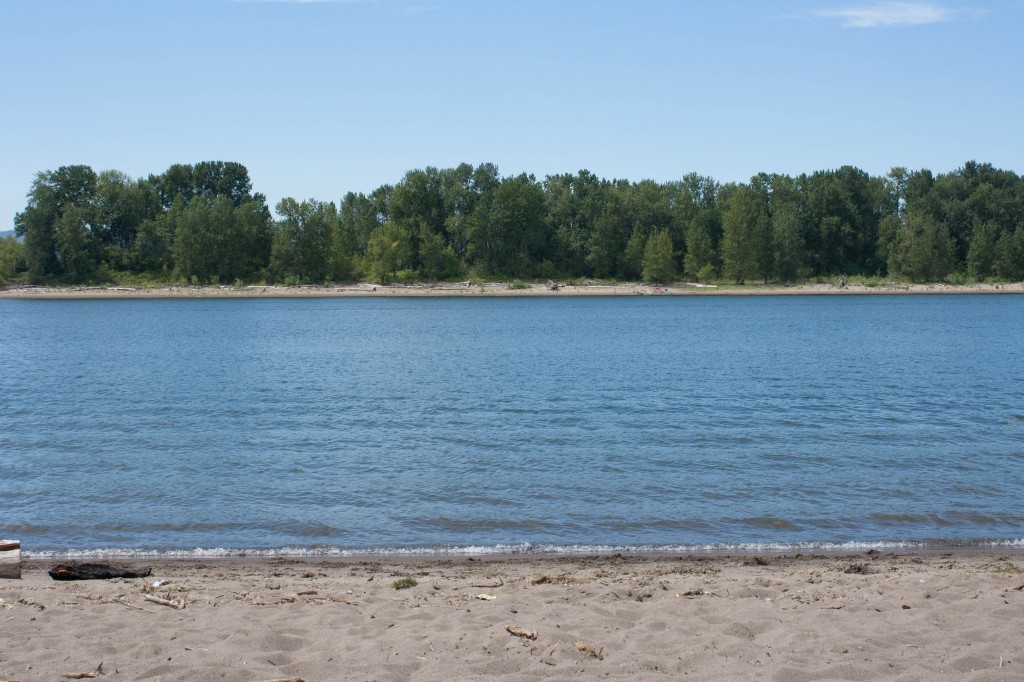 We got sandwiches from New Seasons on the way to the park and met our friends at a picnic table to eat. I was famished after my run. I devoured that sandwich! They make amazing sandwiches there. So freakin’ good. 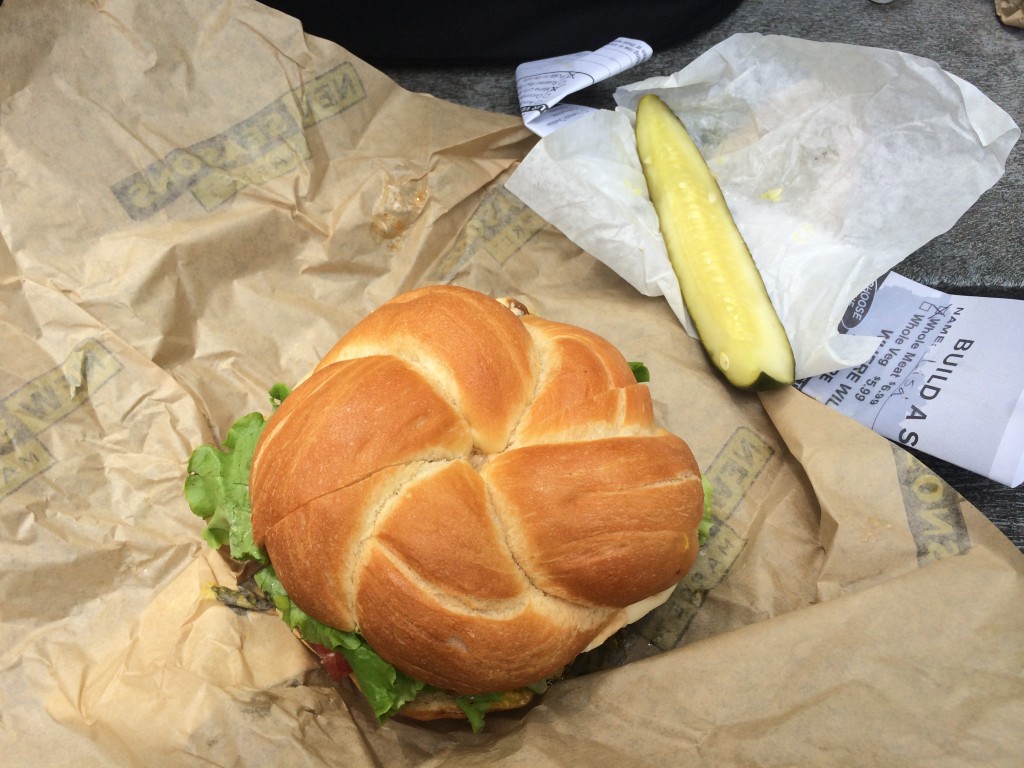 After we were done eating we headed down to the beach area. It was supposed to get to 90 degrees that day. Last time we were there with my friends Erika and Charles, I regretted not bringing enough water. This time I packed tons. I filled our insulated growler with ice water, plus two water bottles, one bottle of Powerade (just in case) and a soda for Michael and I. I brought Bella’s water dish and made her drink throughout the afternoon, which she sometimes stubbornly refuses to do. I put on more sunscreen (another goal for this summer–be better about sunscreen). We spread out blankets in the sand and just chilled. 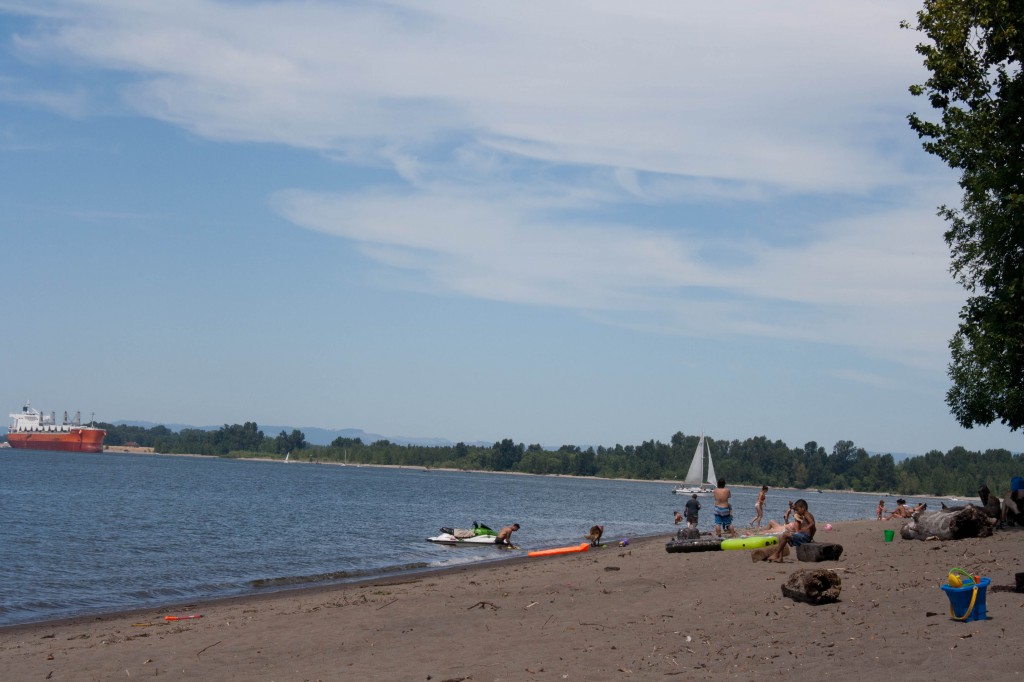 I had been apprehensive about taking Bella there. Part of me was excited to show her something new and exciting that I knew she’d LOVE. But part of me was nervous about a lot of things. First, there were going to be a lot of people there (she gets nervous around strangers) and second I knew there would be tons of off-leash dogs. I also worried about Bella running away if we let her off the leash. But in the end, she’s usually pretty good with her recall and I just wanted her to have fun so I let her off the leash. 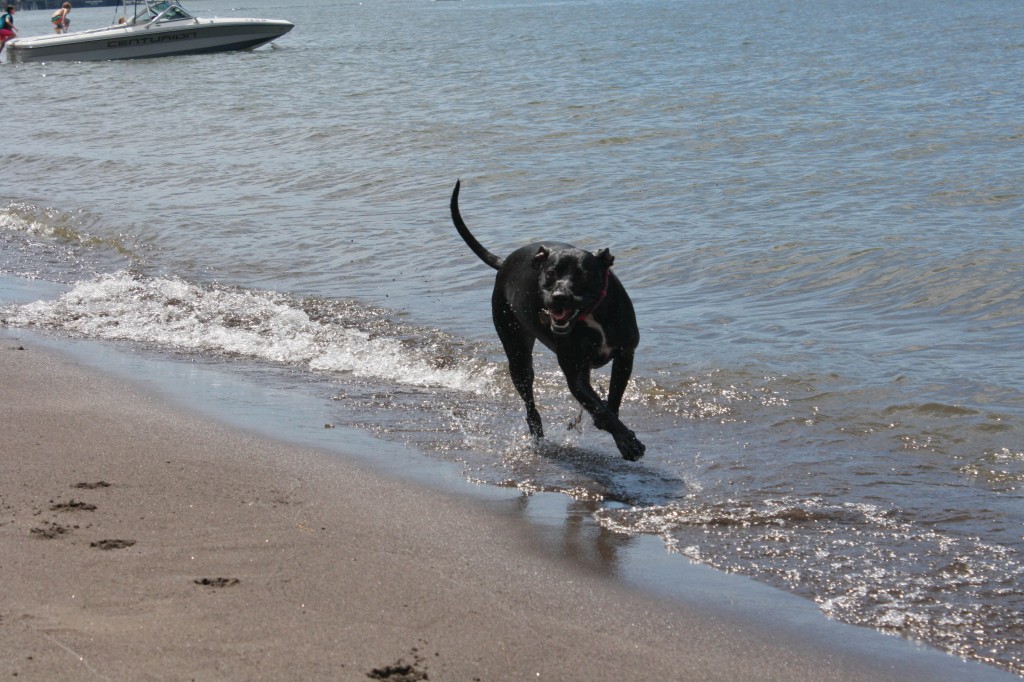 The second she was off the leash she was in the water! I’ve never seen her more excited!!! She had the biggest, goofiest look on her face! She splashed around in the waves a bit and then started jumping over the waves and jumping into the water. I took a very hilarious and adorable video and posted it on my Instagram, if you want to check it out. 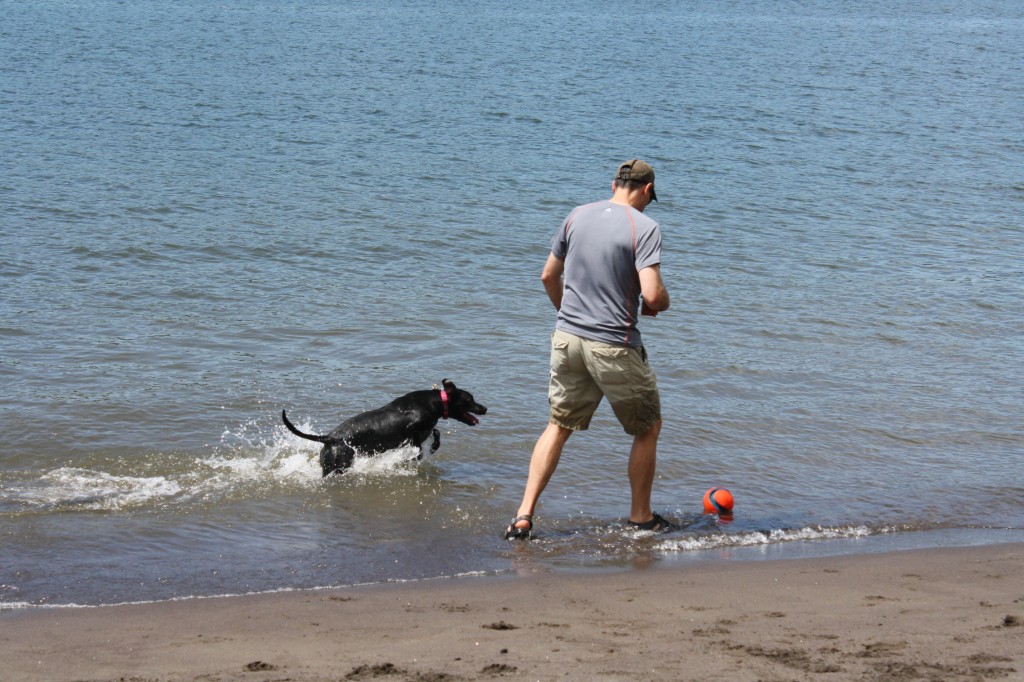 At one point we threw the ball in the water and she jumped in to go get it but I think she realized she was out a little too far and couldn’t get the ball so she just turned around and paddled back to shore. Charles waded into the water and grabbed her ball. LOL Look at her tongue! 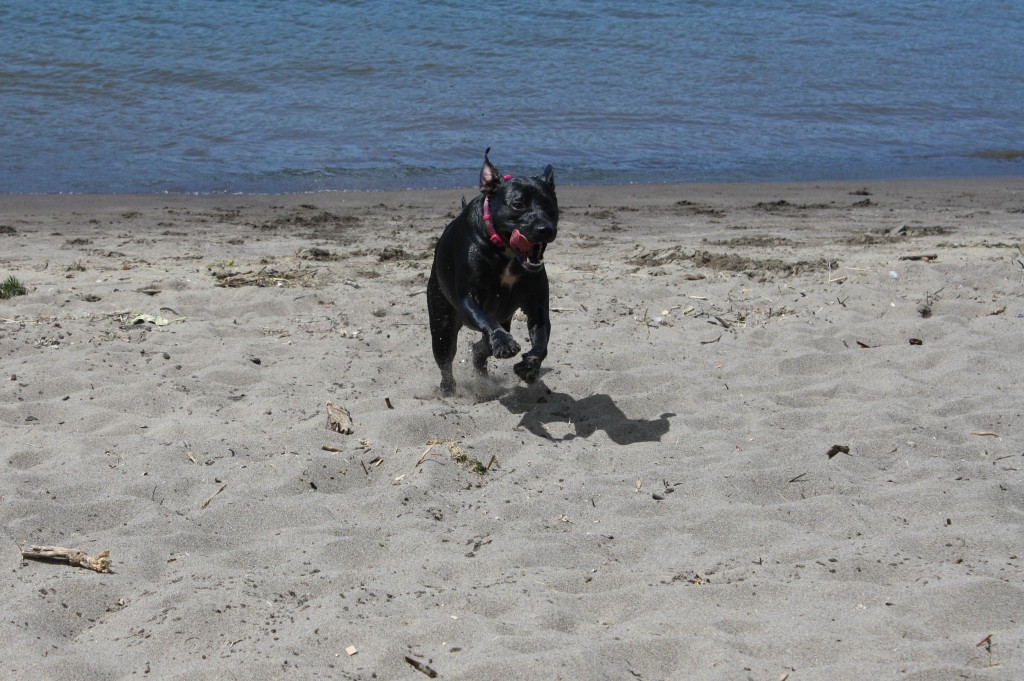 She also made a friend! There was a little dog with some people next to us who was chasing a tennis ball and retrieving it from the river. Bella ran next to her up and down the beach. It was so cute to watch! They’d throw the ball for their dog and both dogs would run after it but Bella is never interested in any ball but HER OWN and so she never tried to take the other dog’s ball. She just wanted a partner to run with on the beach!! 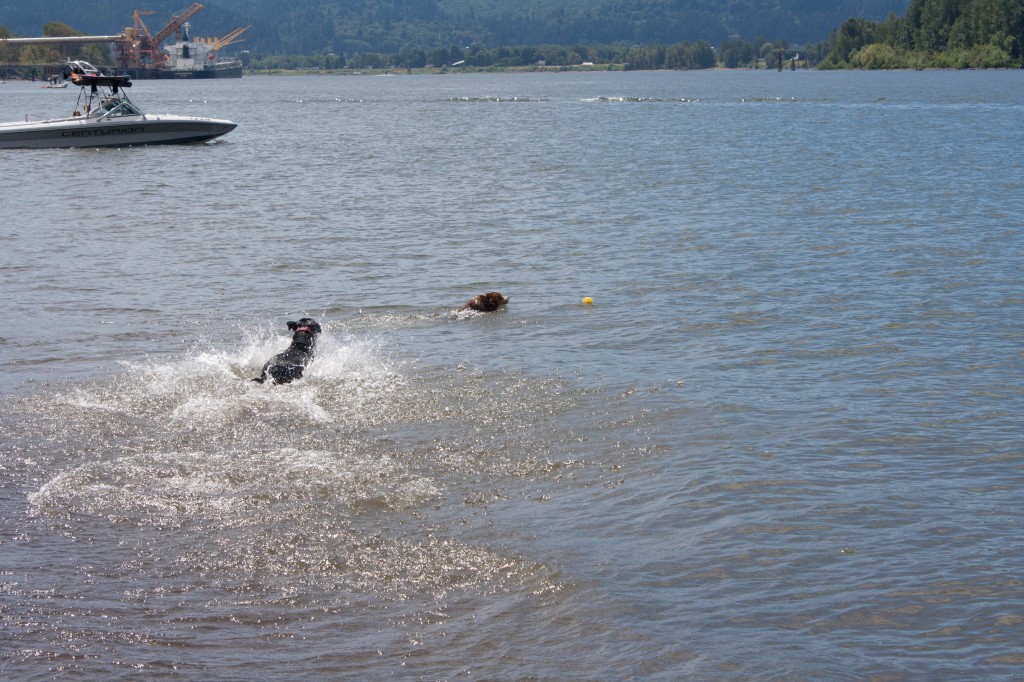 I have to tell you, there is no other feeling better than the pure joy of watching a dog have fun! It’s such an amazing feeling seeing her experience things for the first time and just experience JOY. How often as adults to we take pleasure in new things and feel JOY? Rarely. Not often enough, for sure. Bell was having a BLAST. She was racing up and down the beach, flopping and rolling around in the sand, and swimming in the river. 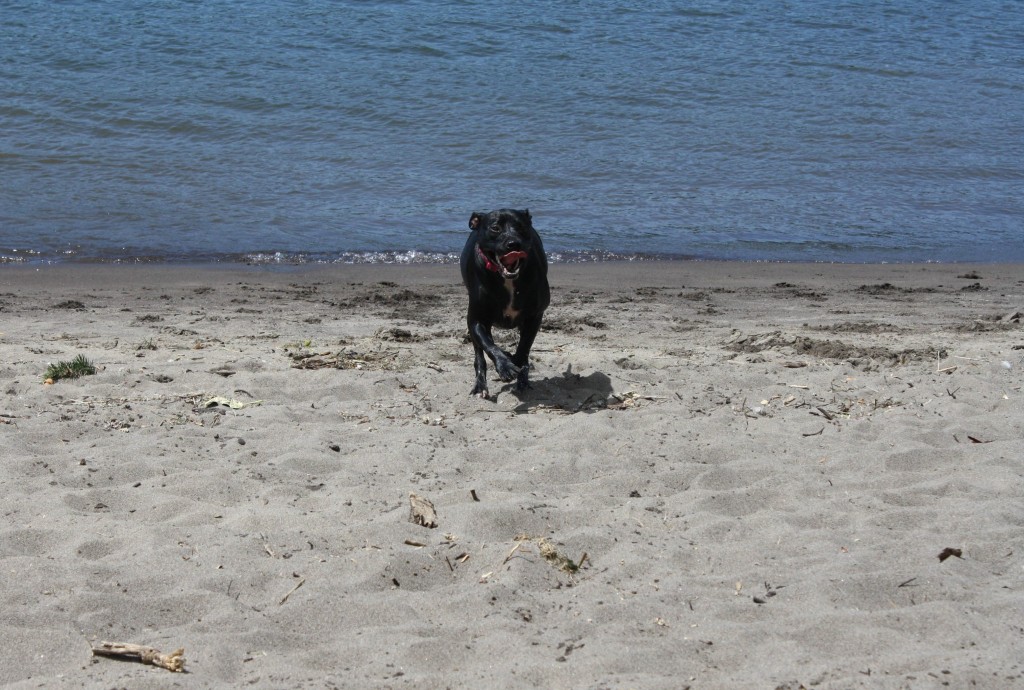 I wish we had had more time to spend out there. Alas, after about 2.5 hours we had to pack up and head out. I had plans to meet my friend Star for a very needed pedicure and desperately needed to shower off the sand beforehand. And you better believe Little Miss had a bath that night! She was covered in sand. 😉 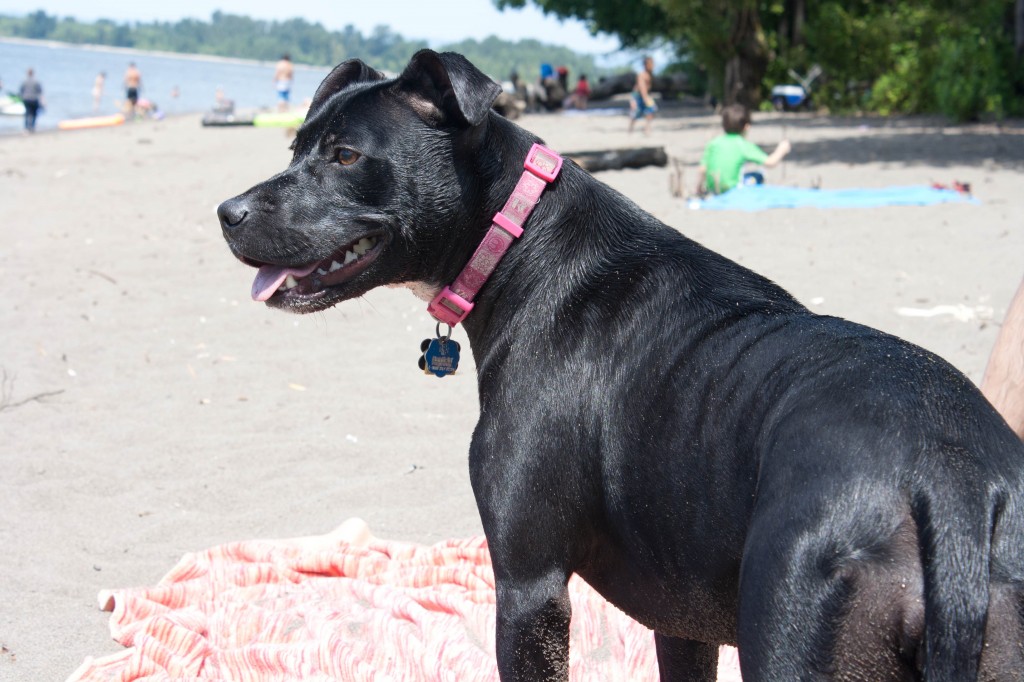 I think I spent too much time in the sun over the weekend. I had a dull headache for both Saturday and Sunday evenings, despite trying to drink a ton of water and using sunscreen. My shoulders, neck, biceps and deltoids were positively WRECKED from kayaking–I was SO sore (and really, running was the only thing I could physical do that next day–no way was I weight lifting or swimming). Despite that, the weekend was superb and I am happy with the memories AND crossing things off my summer list!

Saturday morning I had a decent workout in the gym (and it was nice that I got there early before it was too crowded) but unfortunately pulled a muscle in my back. That was a bummer but at least it wasn’t so bad that it prevented me from having a really awesome day with friends. 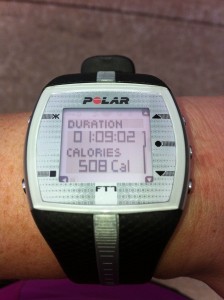 We’d planned on doing something like this for awhile and finally did it. Michael and I met our friends Erika and Charles at Kelley Pointe Park for a picnic lunch and to hang out in the sun. The day was overcast, gray and a little drizzly but it promised to clear up by the time we met them at the park in the afternoon. I wouldn’t say that I planned well for our outing  (shorts and a tank top and flip flops would have been better). Sunscreen and more water would have been ideal, too. 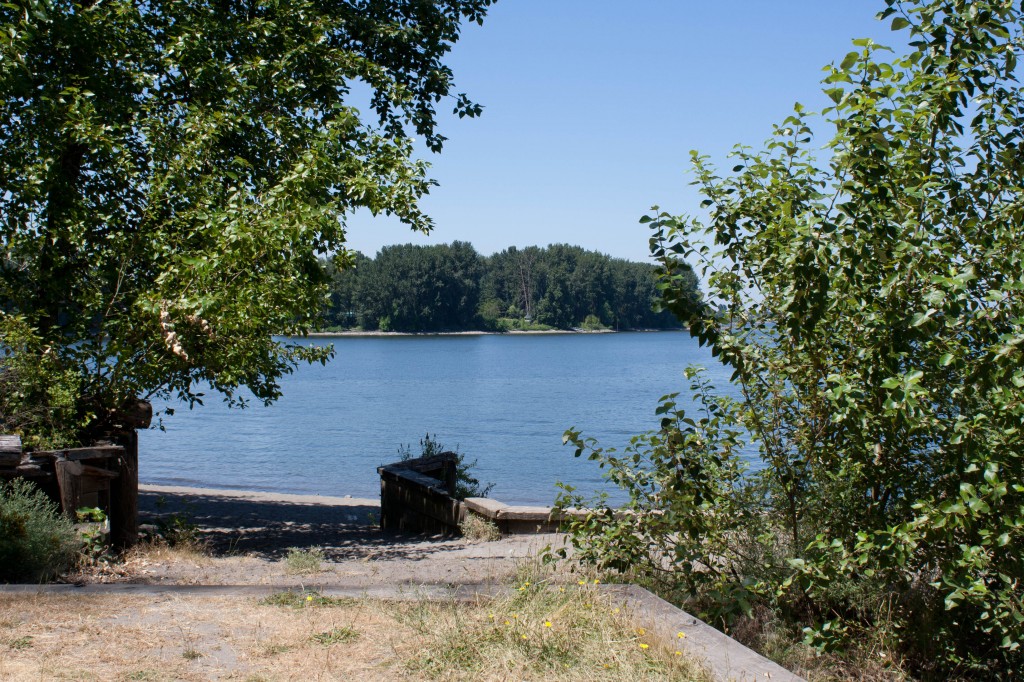 I’ve never been to Kelley Pointe Park but it’s the park on Marine Drive right on the river that Michael and I have tried to bike to many times. Something always happened to keep was from making it there–getting lost, flat tires, etc. I am so glad we finally got to discover this gem in the city!! It’s a HUGE park with so much room for big groups of people. There are a bunch of different picnic areas, bathrooms (nice) and views of Mount Hood, downtown Portland and the water.

The four of us sat at a nice picnic table next to the sandy beach and Columbia River and ate a picnic lunch. Michael and I brought sandwiches from the New Seasons Deli and I made a killer quinoa salad to share.
[amd-zlrecipe-recipe:74]

I loved the flavors and the crunchiness of the salad. Erika made a pasta salad and brought some fresh watermelon to share and they had Subway sandwiches. I was famished by the time we got settled in and ate! I had half a roast beef sandwich and lots of salad. 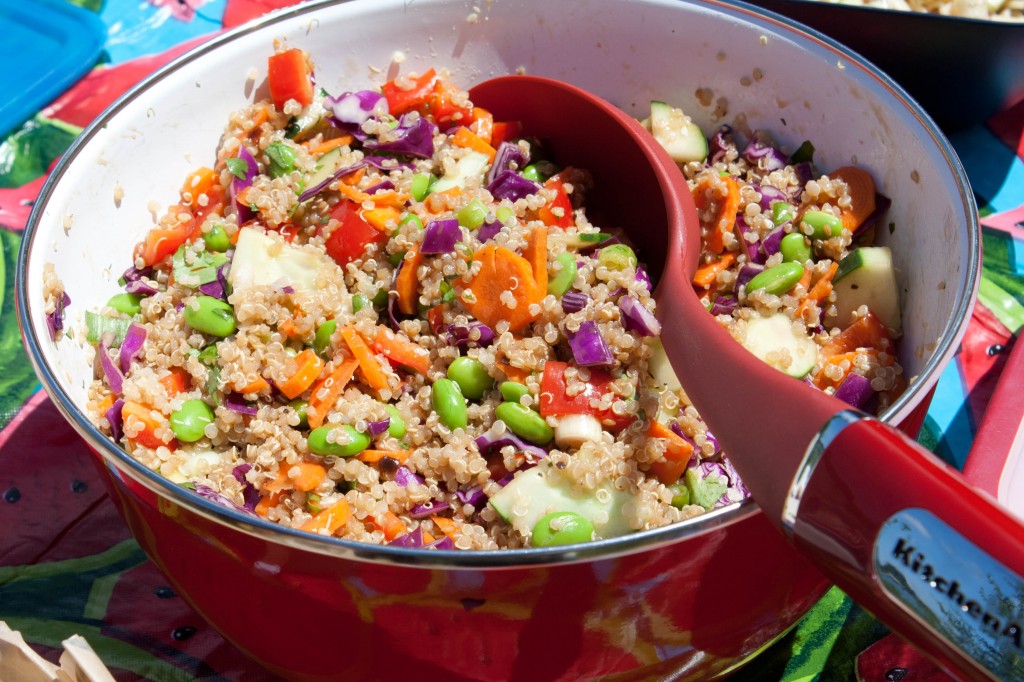 It was so much fun having a picnic potluck lunch! The food was delicious and healthy and we definitely needed the nutrients for the rest of our outing. 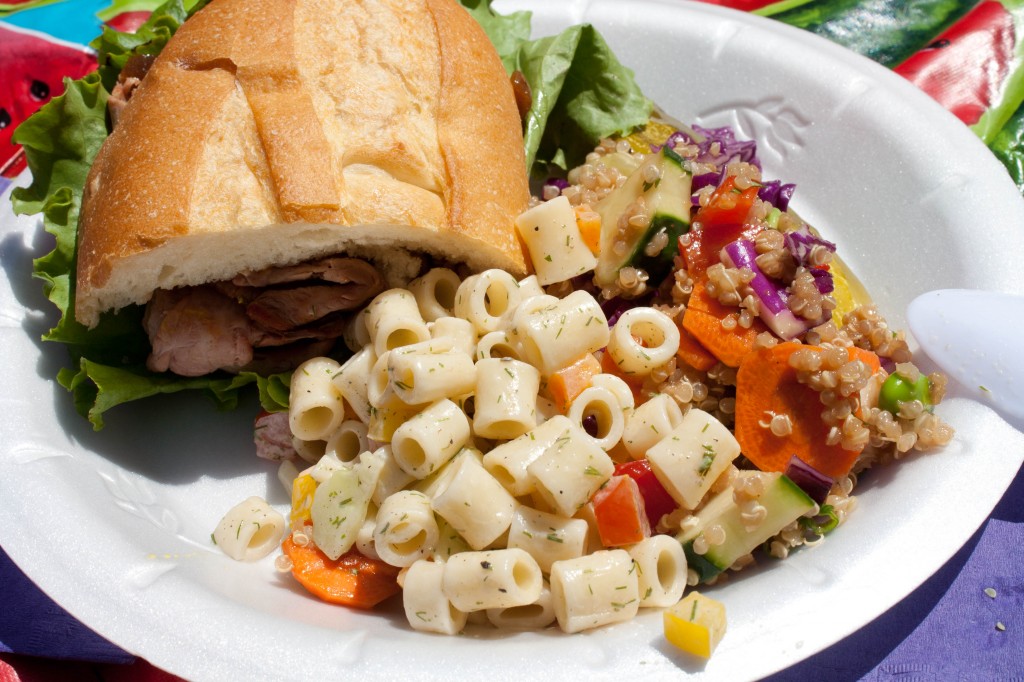 After lunch we packed up the food and walked down the path to a large, open grassy field to play bocce ball. I bought a set at the store on sale recently and was so happy to be able to try it out! It had been a good decade since I’d played bocce ball but it wasn’t too hard to pick back up. I also had a badminton set but we never actually got to that. 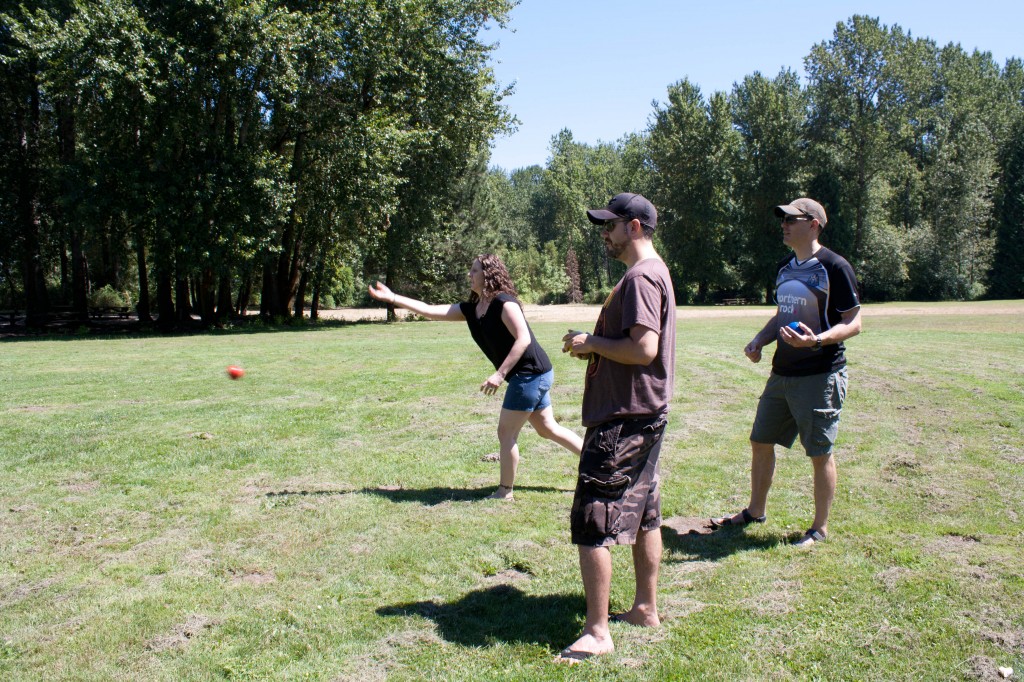 Michael and I were on a team and Charles and Erika were a team and we actually did pretty well! It was neck and neck for awhile. The bocce ball was so much fun! I just wished I’d packed more water, maybe a hat and some sunscreen! I was baking. 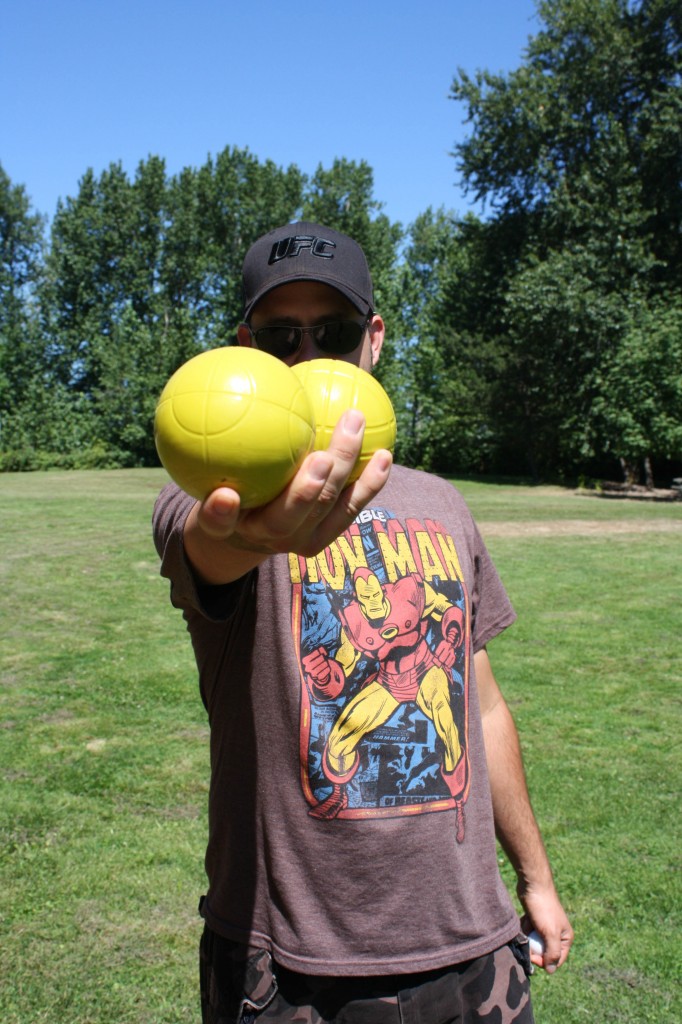 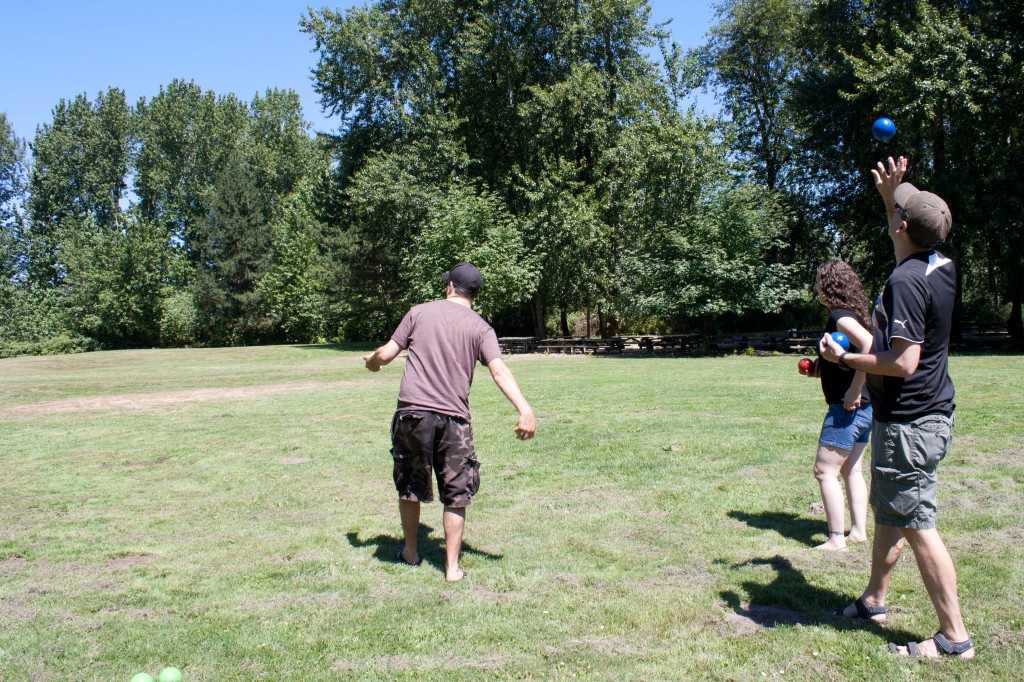 And guess what? I’m not too shabby at bocce!! I actually won a few rounds! We played for maybe two hours, stopped part way for a beverage break and to sit in the shade, then we packed everything up and went down to the beach. 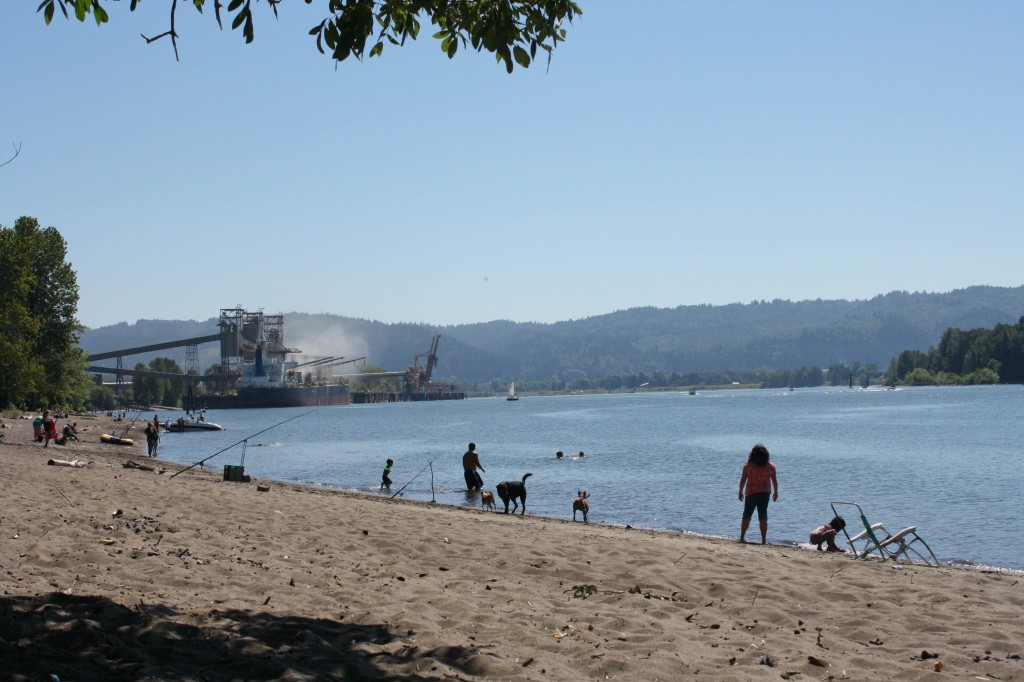 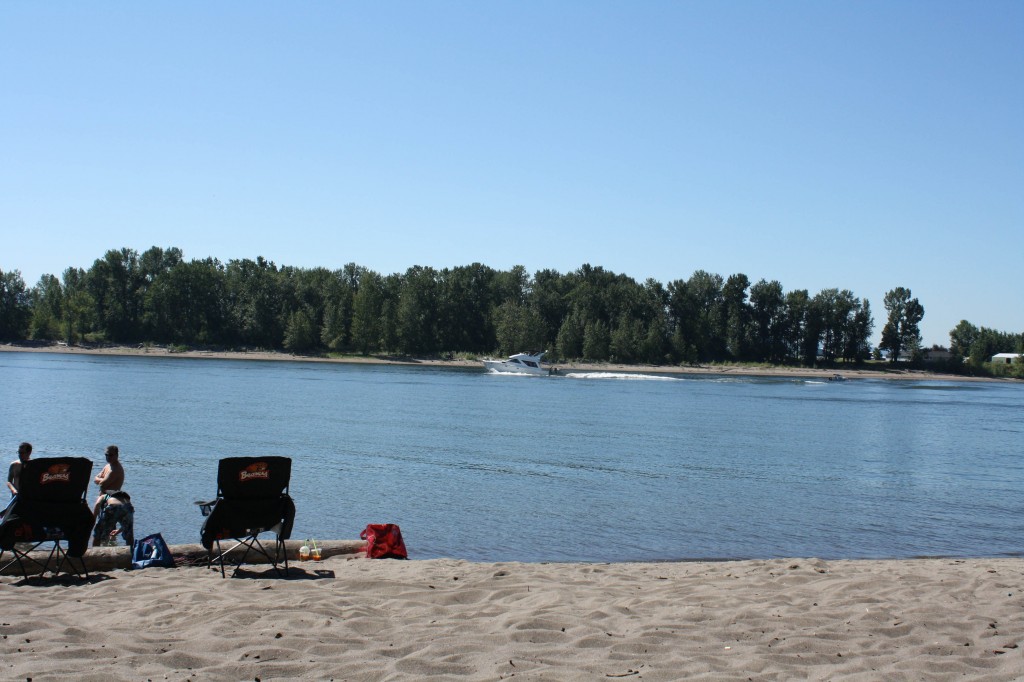 I had no idea there was a sandy beach in Portland!!! Wow! It was a happening place, too. There were tons of people but it wasn’t overcrowded. There were kids in life vests swimming and building sandcastles, some fly fishermen and tons of boaters. 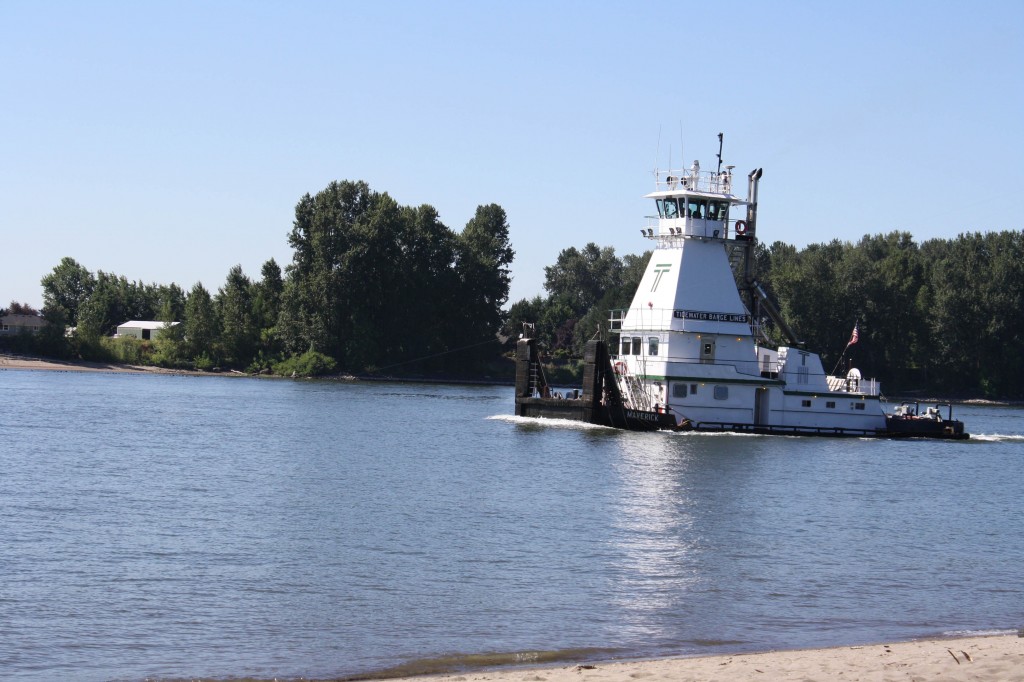 There were a lot of party boats, too. Lots of people on a boat with loud music as they sped by the shore. It was very cool. Again, I need to make some friends with boaters….Michael and Charles played some horseshoe while Erika and I just chilled in the shade on a blanket and enjoyed the hot, sunny day. It was so nice I didn’t want to leave but I knew it was time. I desperately needed water and to get out of the sun. Next time I will be more prepared. 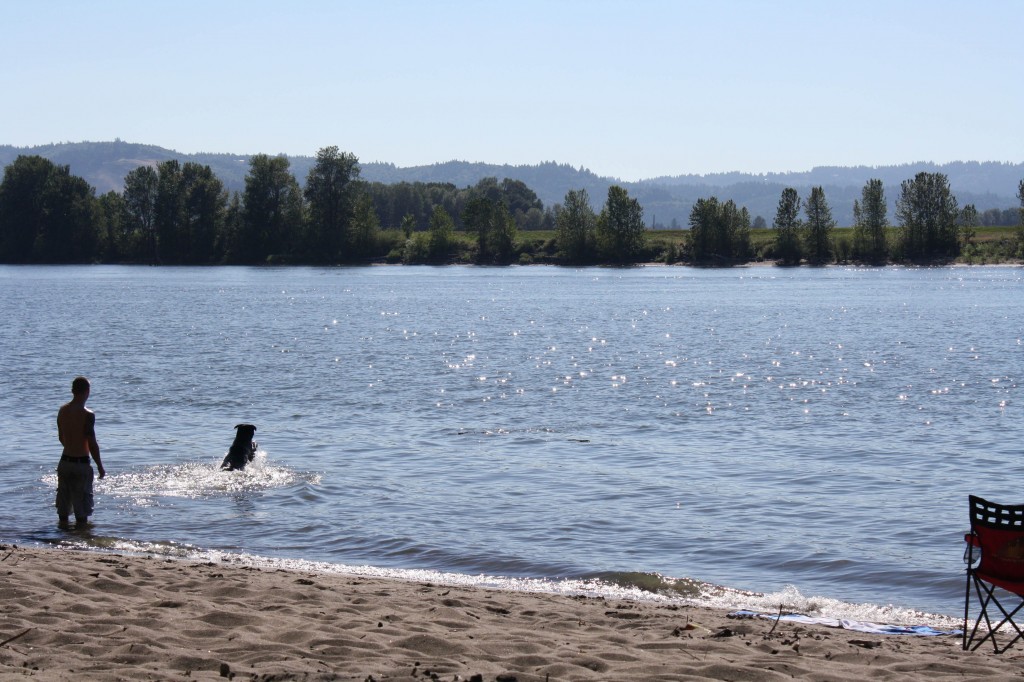 I’m going back here VERY SOON!!! So much fun!! What a fantastic weekend. On Sunday morning I changed up the routine and Michael and I went out to breakfast before I went swimming. I had a soon-to-expire Groupon for Grand Central and realized it was an awesome place to get breakfast!

The place was practically empty, there weren’t long lines and long waits for tables and the food was GREAT! The restaurant and bar just happened to be attached to a bowling alley (too funny). 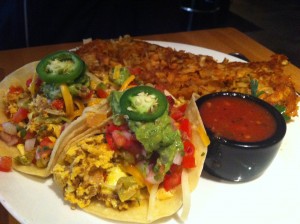 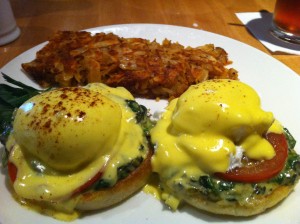 Michael got the breakfast tacos (they were made with corn tortillas) and I got an eggs benedict. It was made with artichokes and spinach and was fantastic! I never order that kind of breakfast and was glad I splurged and gave it a try. The hashbrowns were the best I’ve ever eaten–which is weird because I’m not really a fan of hashbrowns and usually ask for fruit on the side instead. It was so much food I ate half the eggs benedict and half of the potatoes. I’m totally going back to this place!