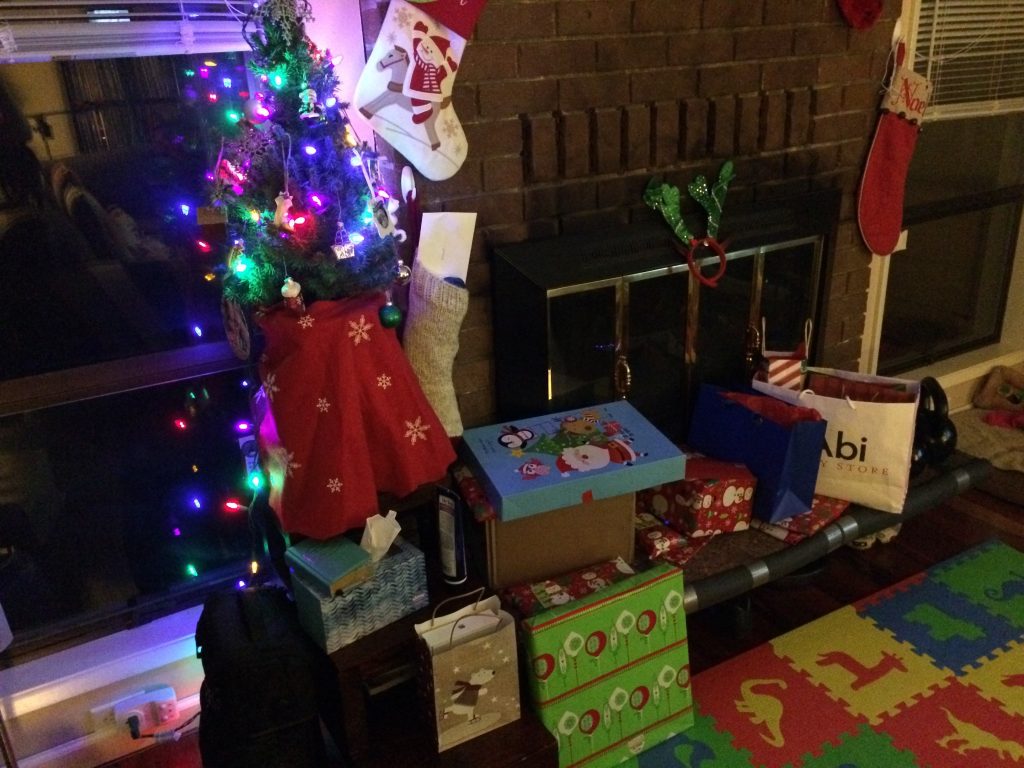 Christmas Eve was pretty low-key. I went to the gym. And then my friend Star and her boyfriend Larry came over for the afternoon to celebrate a mini-Christmas with us. It’s been way too long since we saw each other!:( 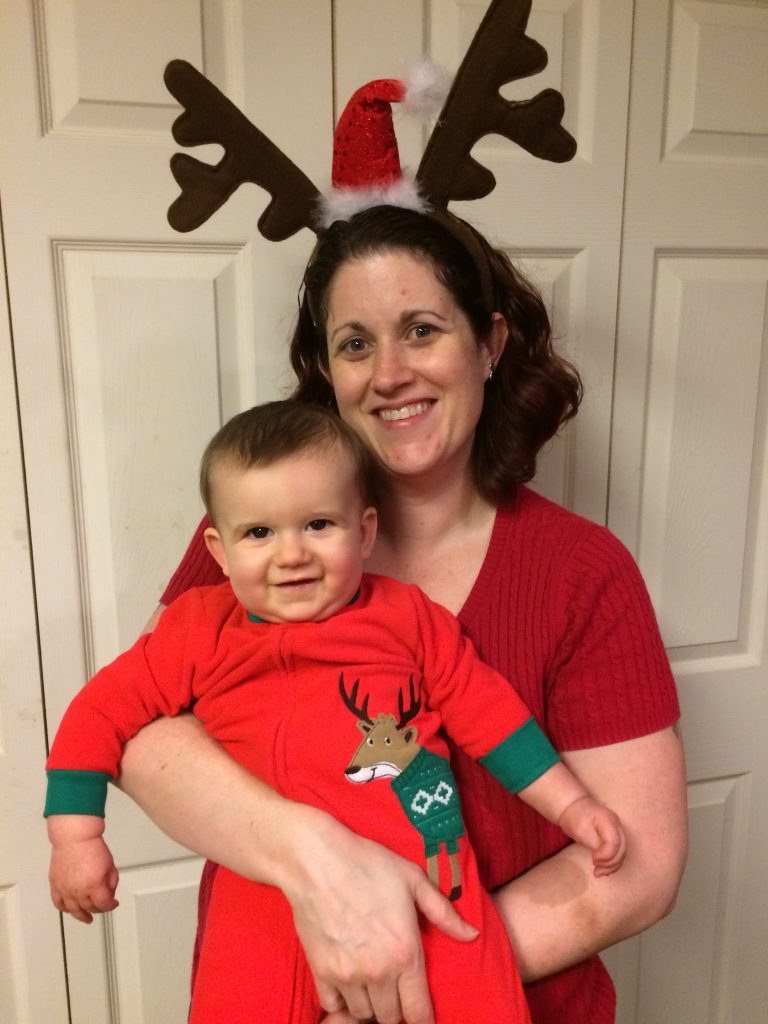 Christmas Eve Logan went to bed early and Michael made Christmas enchiladas and we watched Elf! 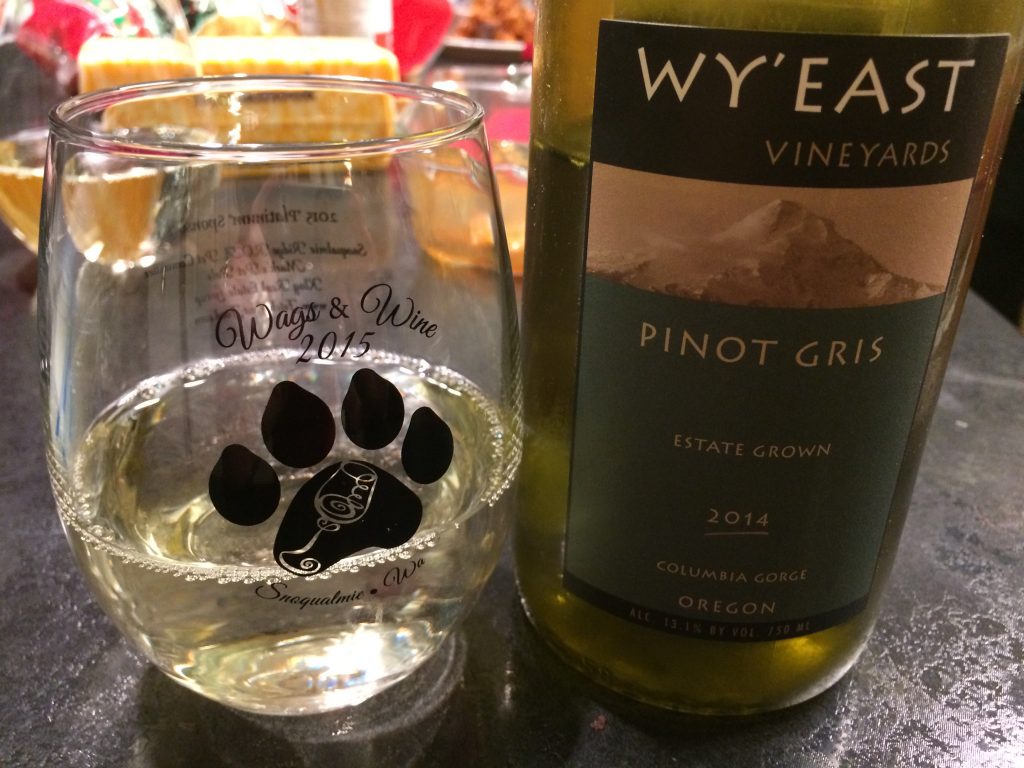 Christmas morning we woke early (thanks baby!) and we had our first Christmas with Logan. It was so amazing to watch him experience his first Christmas. The chaos, the wrapping paper, the presents…it was a lot of new stuff for him! And Logan gave us a present!! 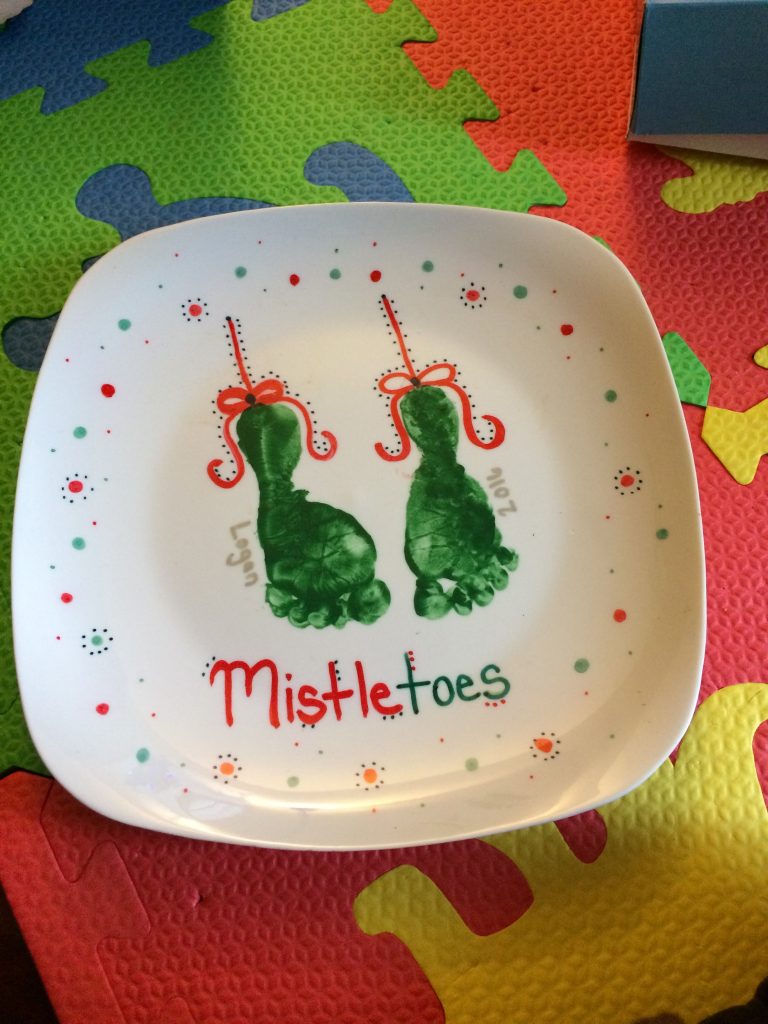 Logan made it at daycare and they wrapped it and gave it to us on Friday when we picked up the little guy. It KILLED ME to wait two days to open it. Seriously, it was like I was a little kid and I was dying to open my present! 😉 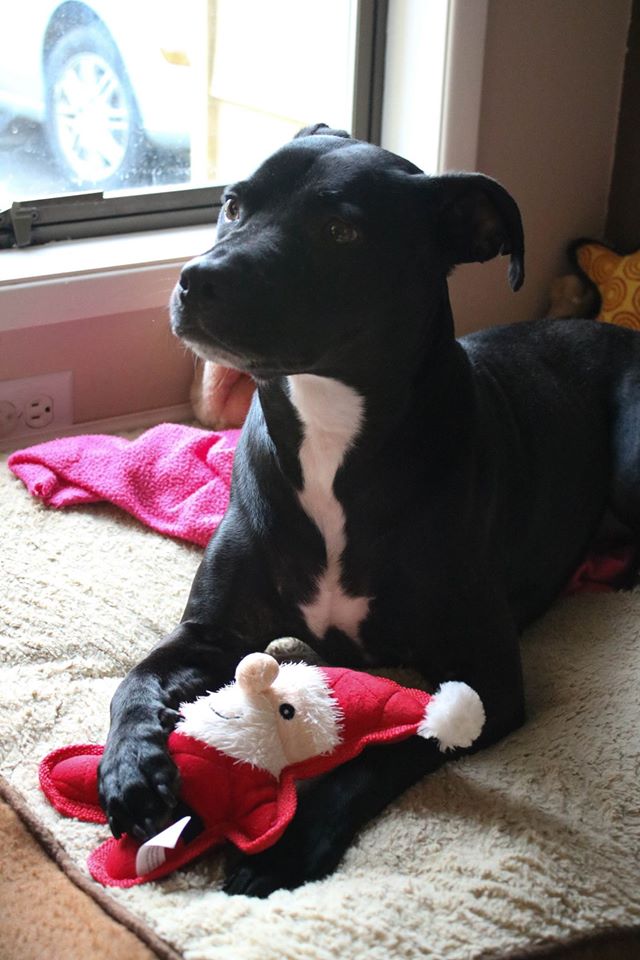 About mid-morning my parent arrived from Seattle and the five of us went to Gracie’s for brunch, as we usually do! Logan did so great at his first brunch. He was a little wiggly and didn’t want to sit still but we took turns holding him while we ate our yummy breakfast and thankfully he didn’t get fussy! 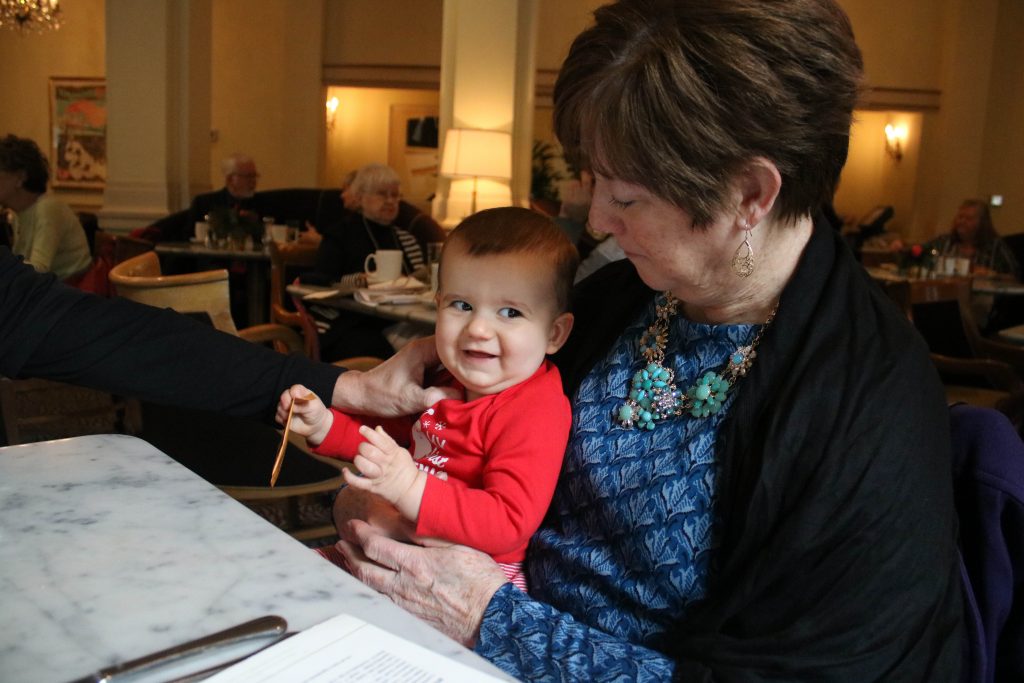 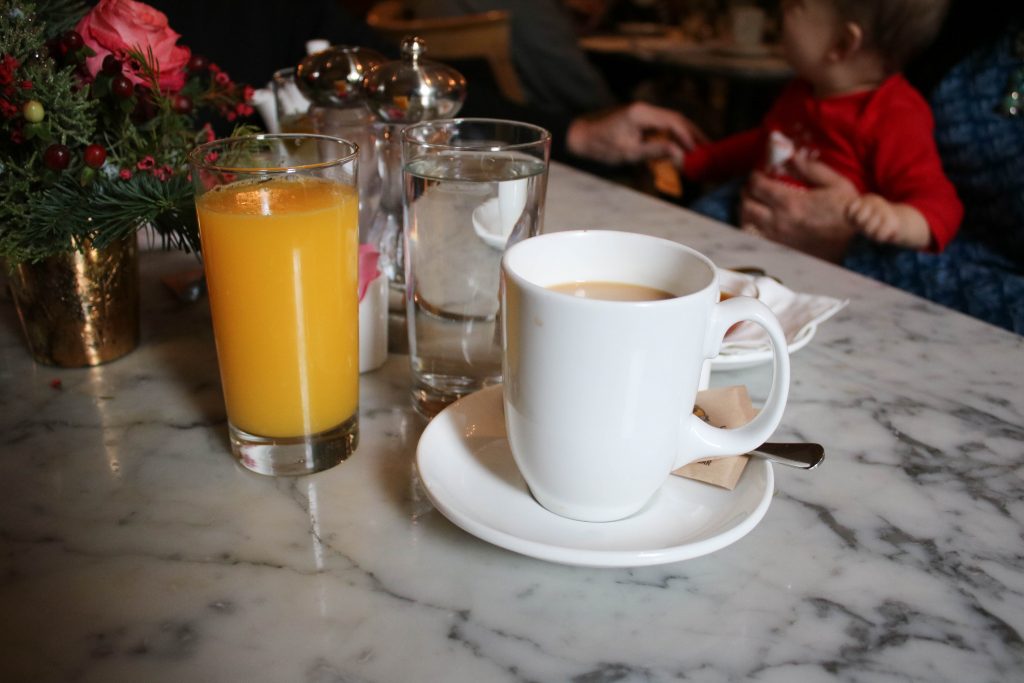 Last year I was pregnant (awwww) and my number one pregnancy craving was orange juice. I remembered that their freshly squeezed OJ was out of this world so I ordered it again this year. It did not disappoint. For breakfast I got the smoked salmon hash with poached eggs on top. It was just ok. I remember the food being better last time. 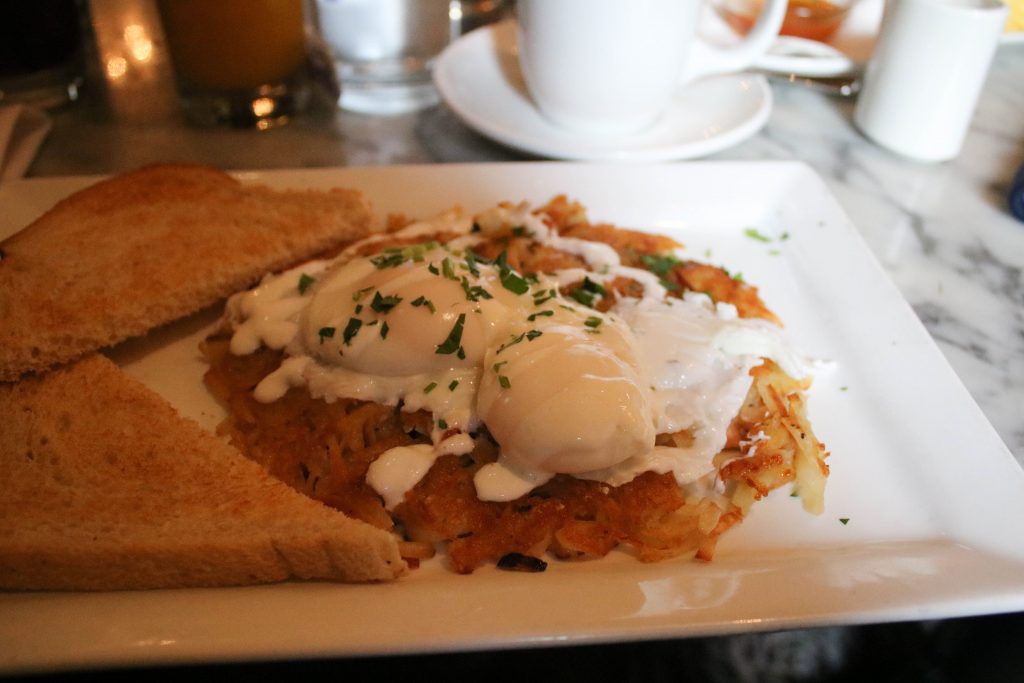 After brunch we took the obligatory Christmas tree photos in their lobby: 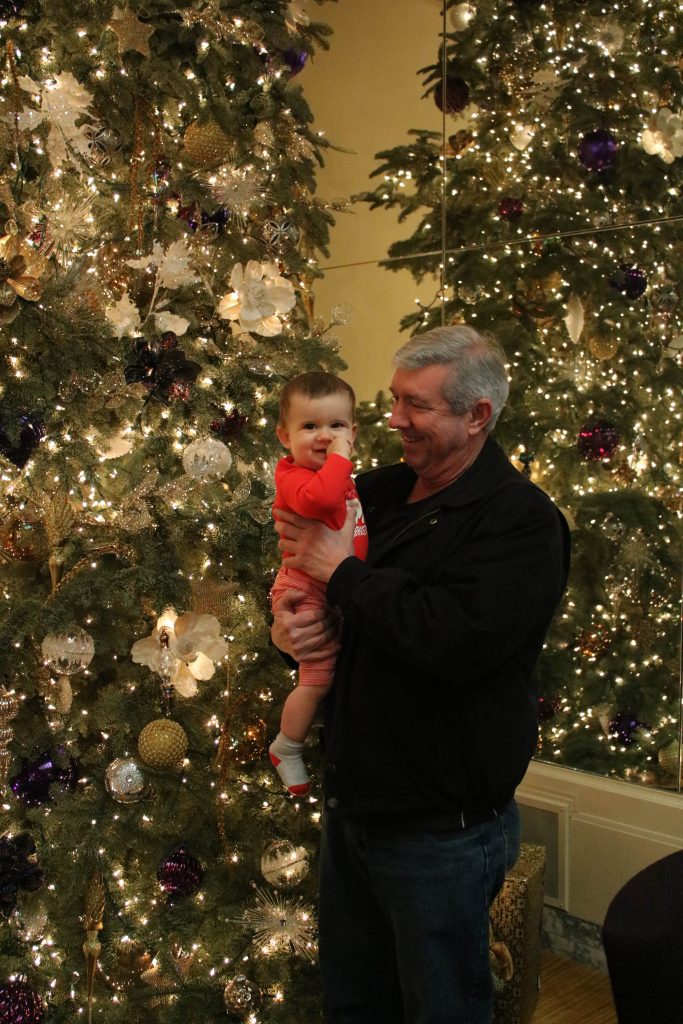 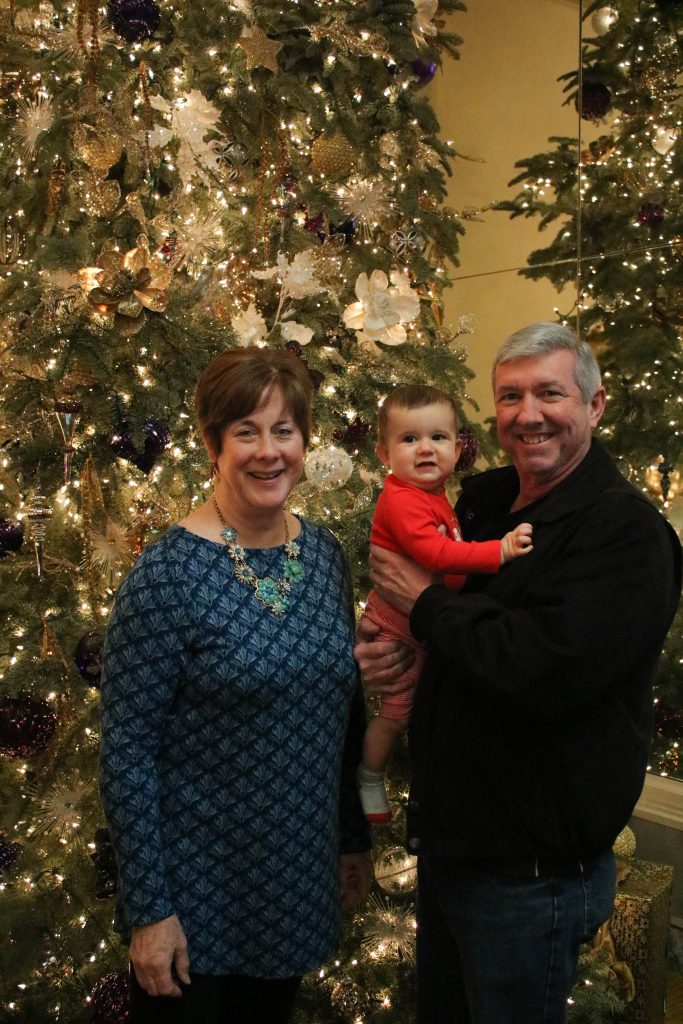 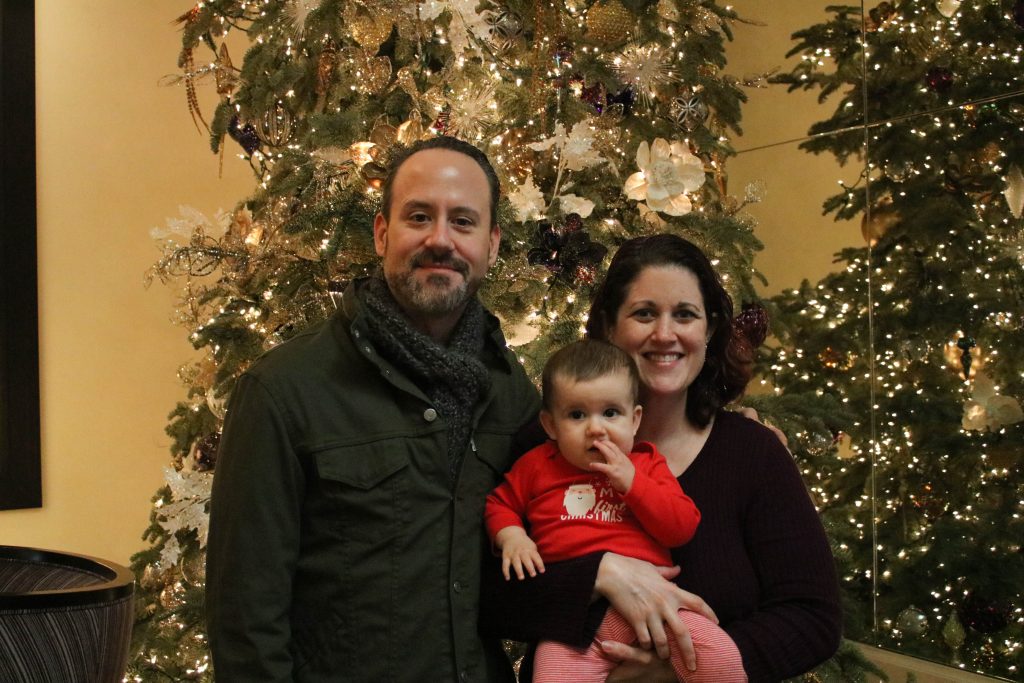 After brunch we went back to the house and opened presents. My brother and I got our parents an ipad mini for Christmas (their first foray into smart phones) and Michael and I helped them set it up and I gave them a tutorial. Then we skyped with my brother and his wife (as part tutorial on how to use it, and also to talk to them on the holiday, of course!).

Around three my parents said their goodbyes and we packed up the car to go to Michael’s mom’s house for Christmas dinner! 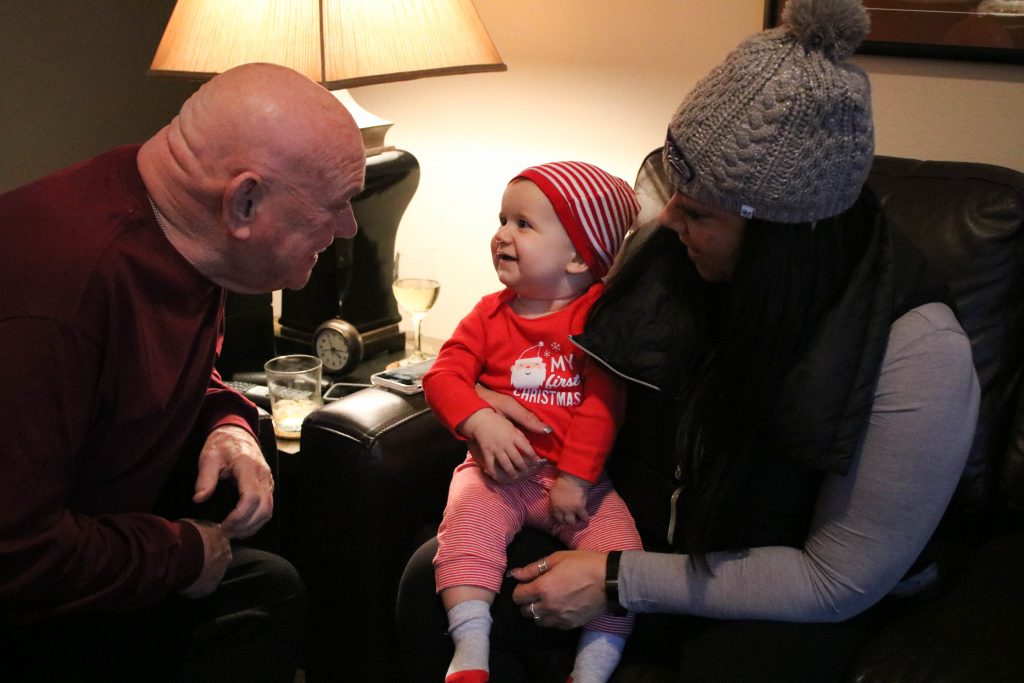 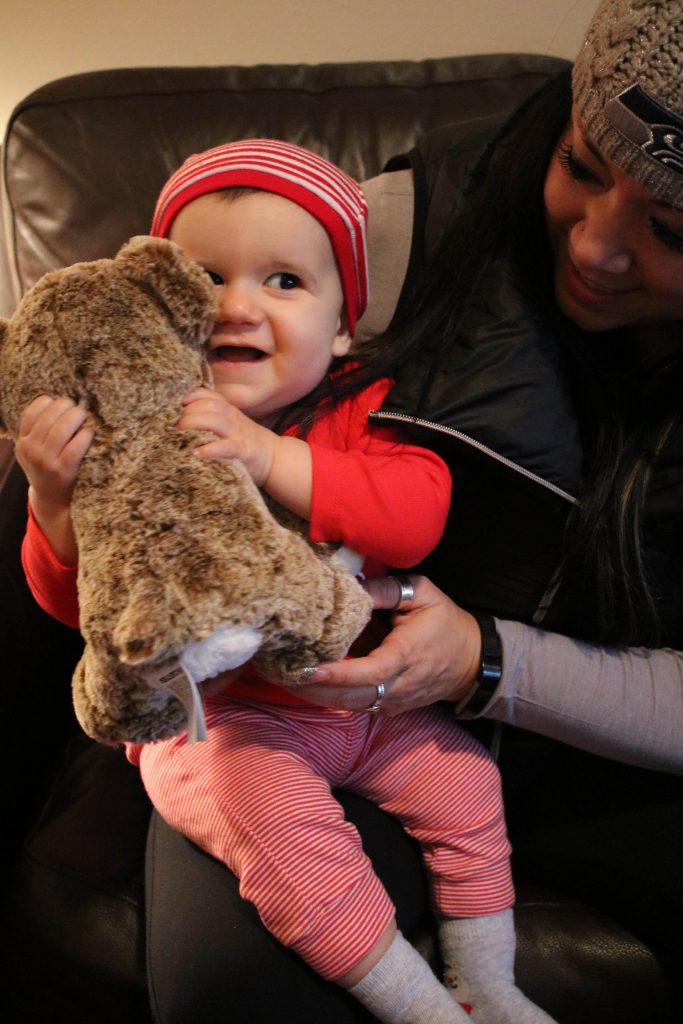 Michael’s mom made a wedge salad. It was so delicious! I don’t think I’ve ever had one before. She also made a pot roast, baked potatoes and steamed broccoli. Dinner was delicious.

Then round four opening presents. Logan was both starting to get the hang of ripping open the paper and also getting overwhelmed and tired. But he had a blast checking out his presents. 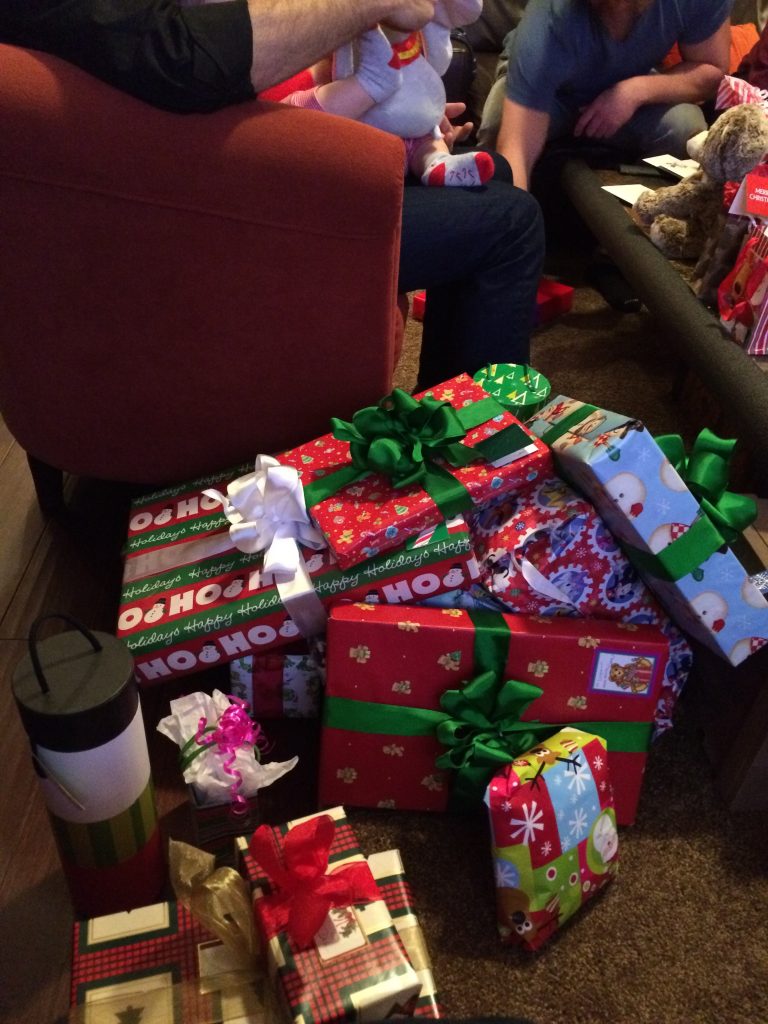 The motorcycle was a huge hit! 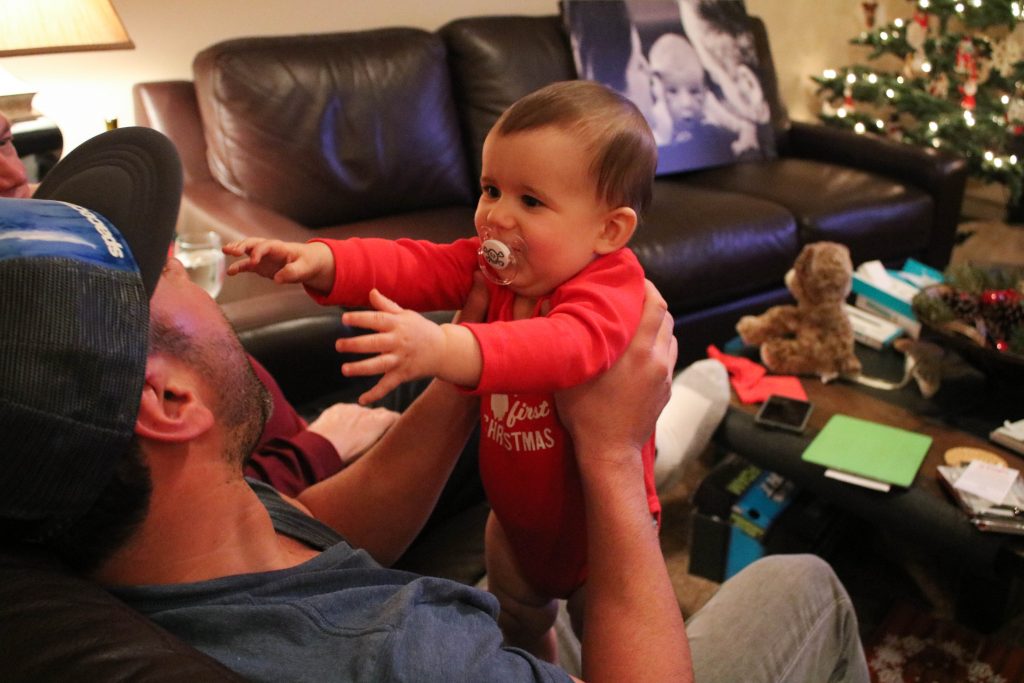 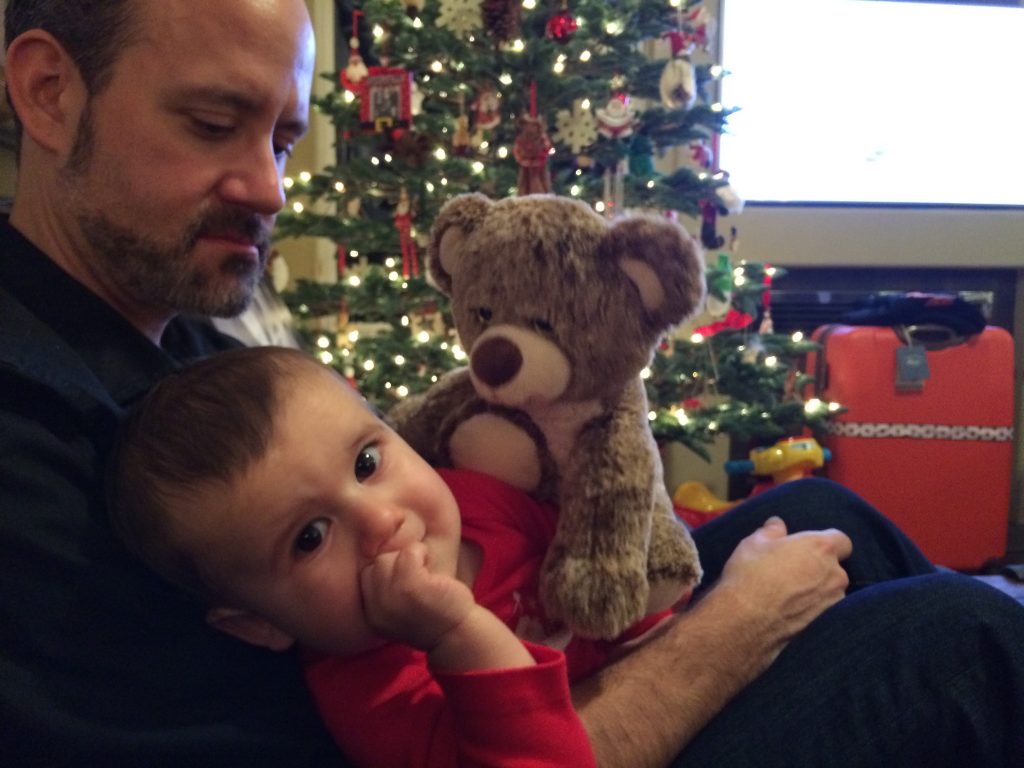 It was definitely a memorable weekend. I can’t wait until next year when Logan is older! The magic of Christmas was so fun to experience through him.

Hope you all had a wonderful holiday!

This weekend we got to meet Santa!

About a month ago I saw an event on Facebook for the local 7 Dees Nursery Reindeer Magic event. It sounded like fun–meet Santa, get pictures and see baby reindeer. Then I saw something even better: $5 fast pass tickets. I immediately bought that and it was totally the best $5 I ever spent! 😀

Thankfully it wasn’t raining, since the event was outside. Logan took a 2.5 hour nap Saturday morning and woke up in good spirits so we went to the event after that. The place was packed and the lines were REALLY long. Seriously, so glad I bought the fast pass. 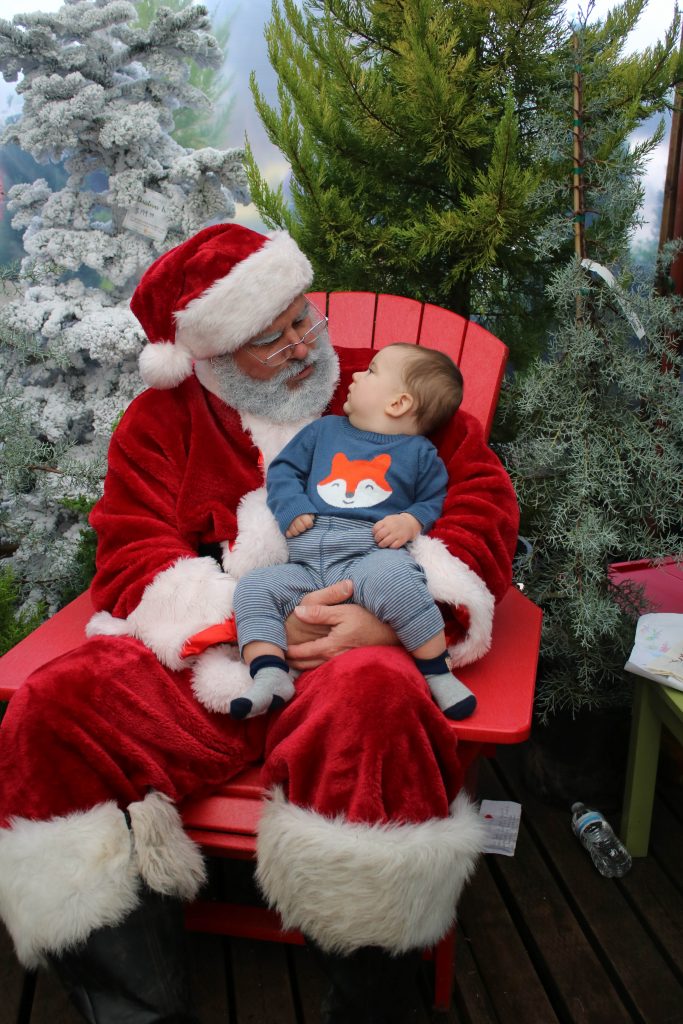 We checked in with our pass and waited about 5 minutes to get a photo with Santa.

I wasn’t sure what was going to happen. It seems normal for people to have the screaming, crying baby with Santa photo so I was kind of expecting to get that. At the same time, Logan doesn’t seemed too freaked out by strangers yet. We lucked out and instead of crying baby photo, we got unimpressed baby photo: 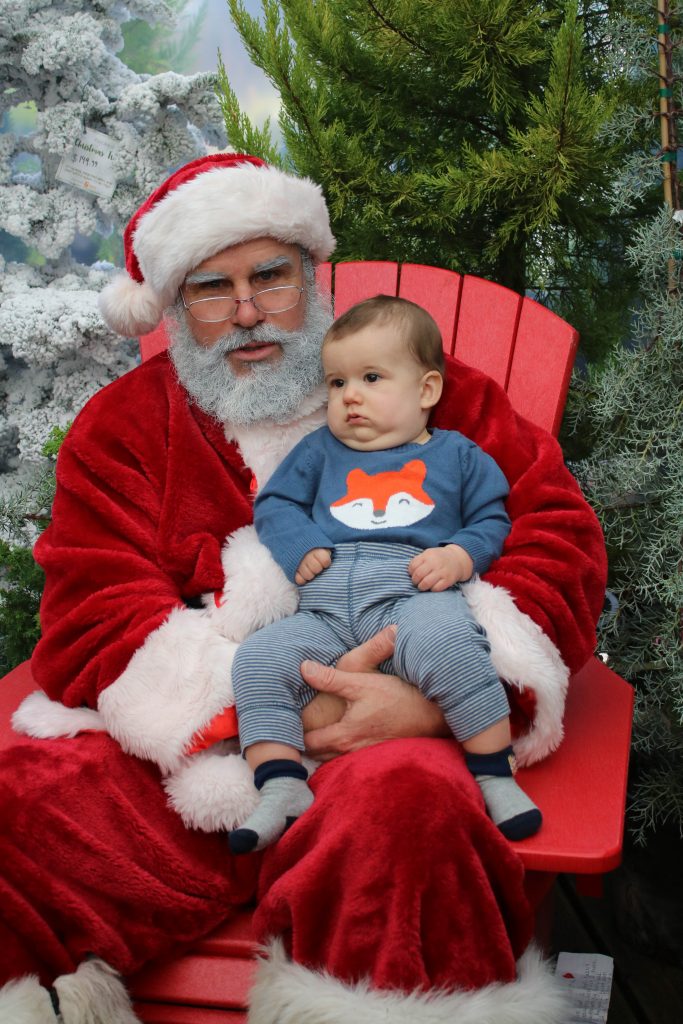 It was a really fun event. They had face painting for the kids. You could buy hot cocoa and mini donuts, too. We tried to do that but the line was too long so we skipped it.

Apparently there was also a blanket and jacket drive. I wish I’d known about that before hand because I would have brought a bunch. Next year I will be prepared. 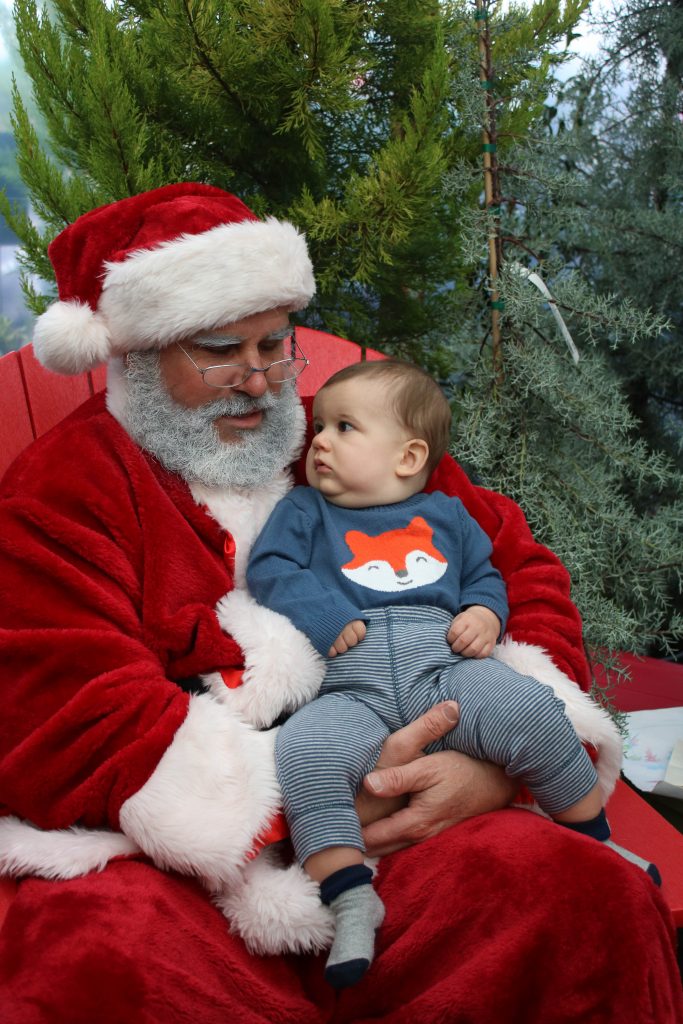 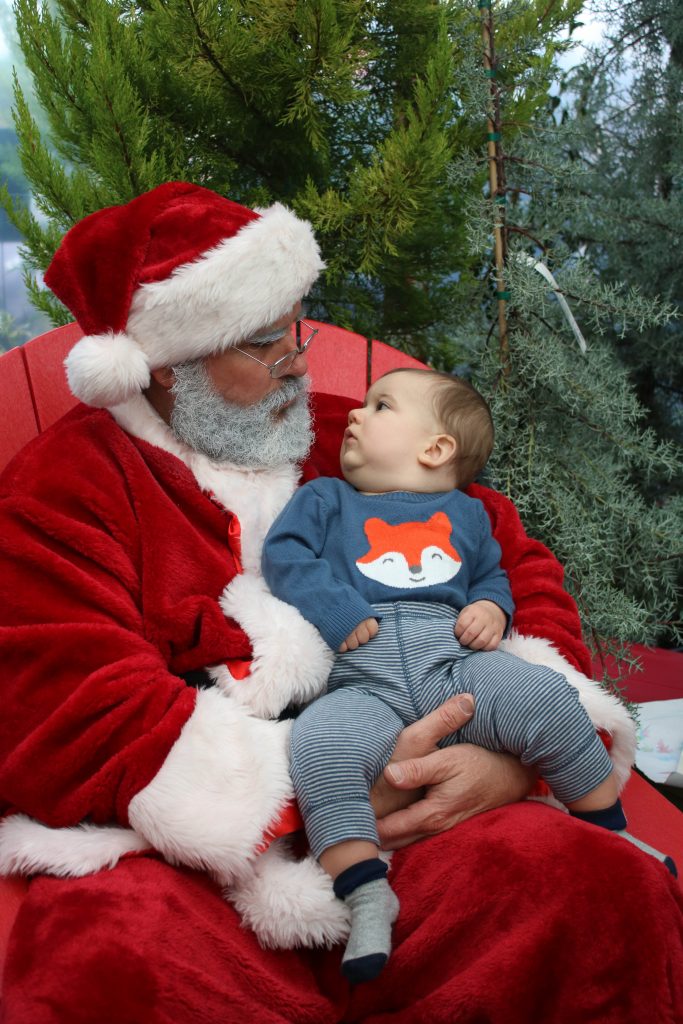 There was also a really long line to get photos with the baby reindeer. I did not buy a pass for that. Maybe next year when Logan is older we’ll do that too. Santa seemed like enough for an 8 month old. 😉 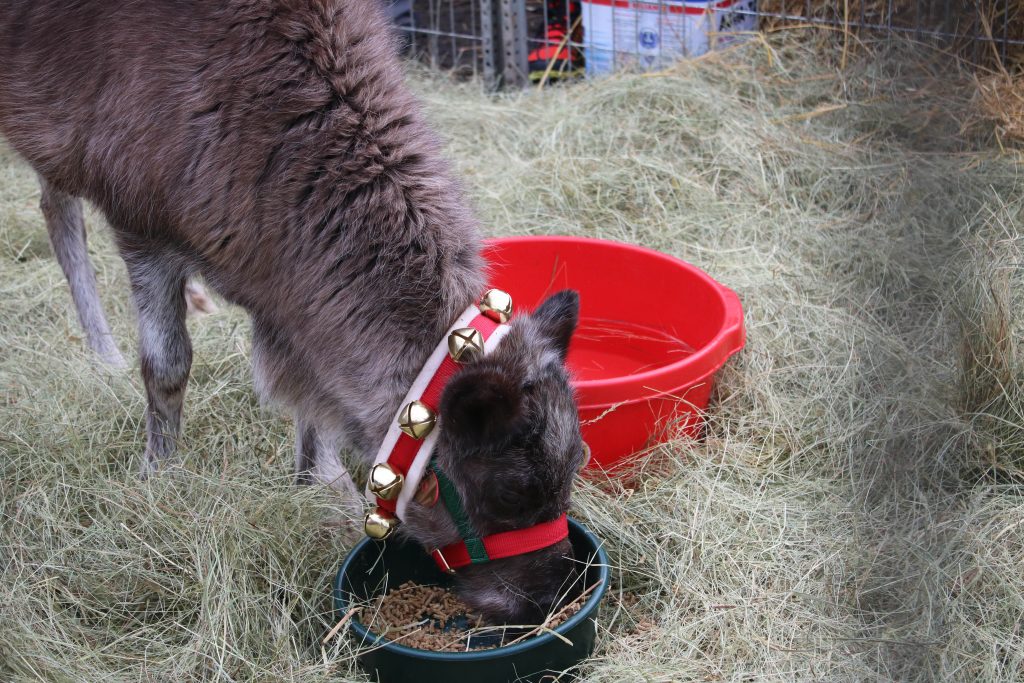 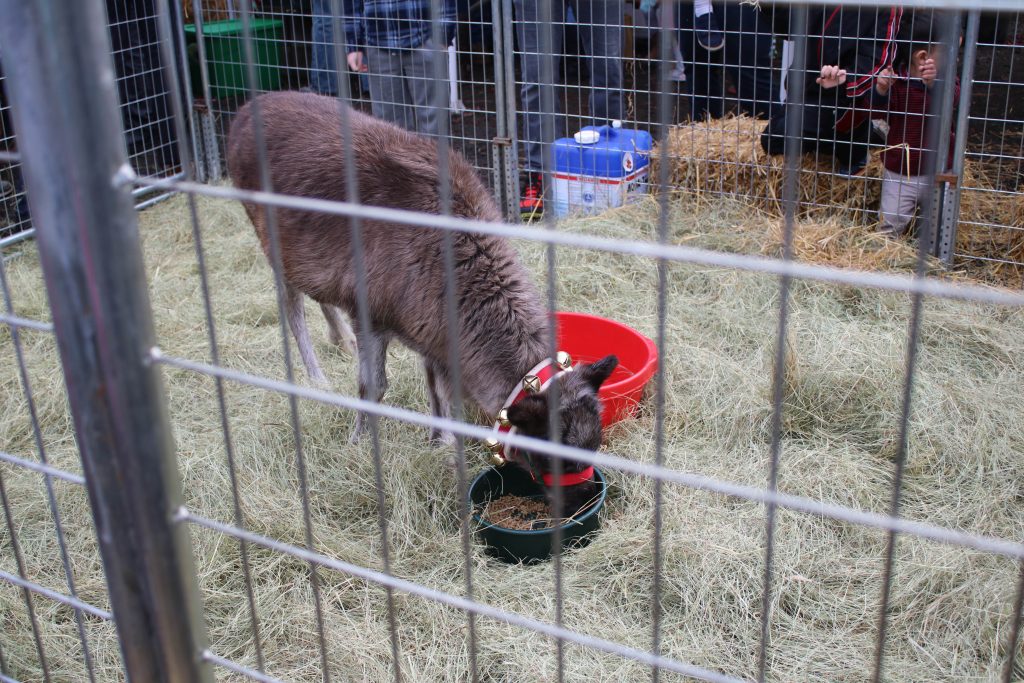 They were doing little train rides for the kids: 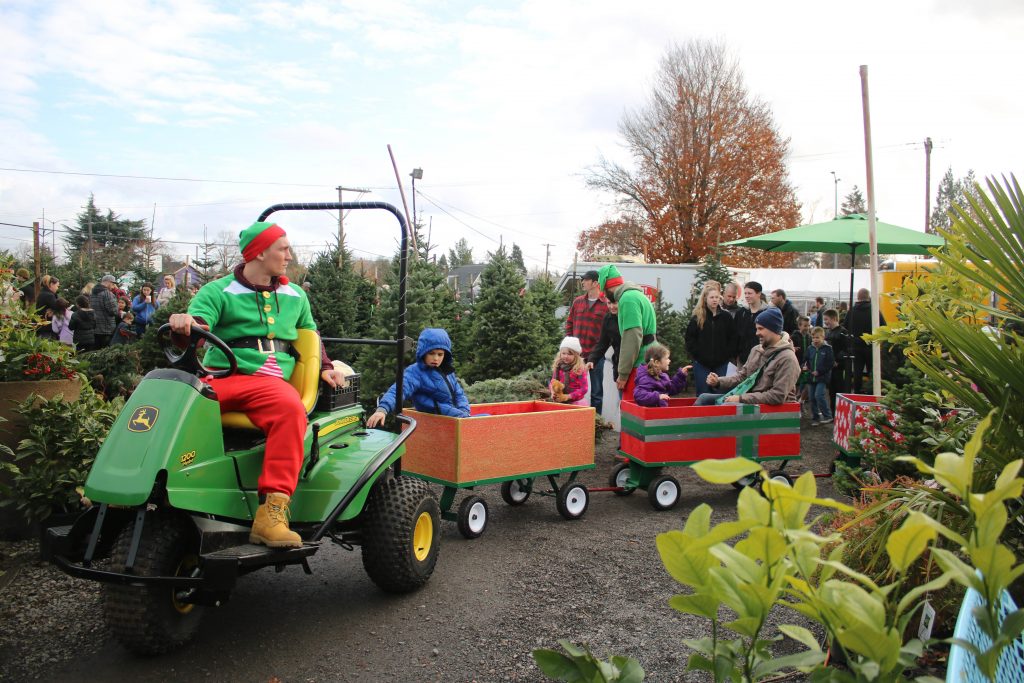 We walked around for a bit and ran into a friend with her baby. It was good to see her. Then we left. It was a good time and I’m glad we went and got photos. 🙂

When we were walking back to the car I saw this plant: 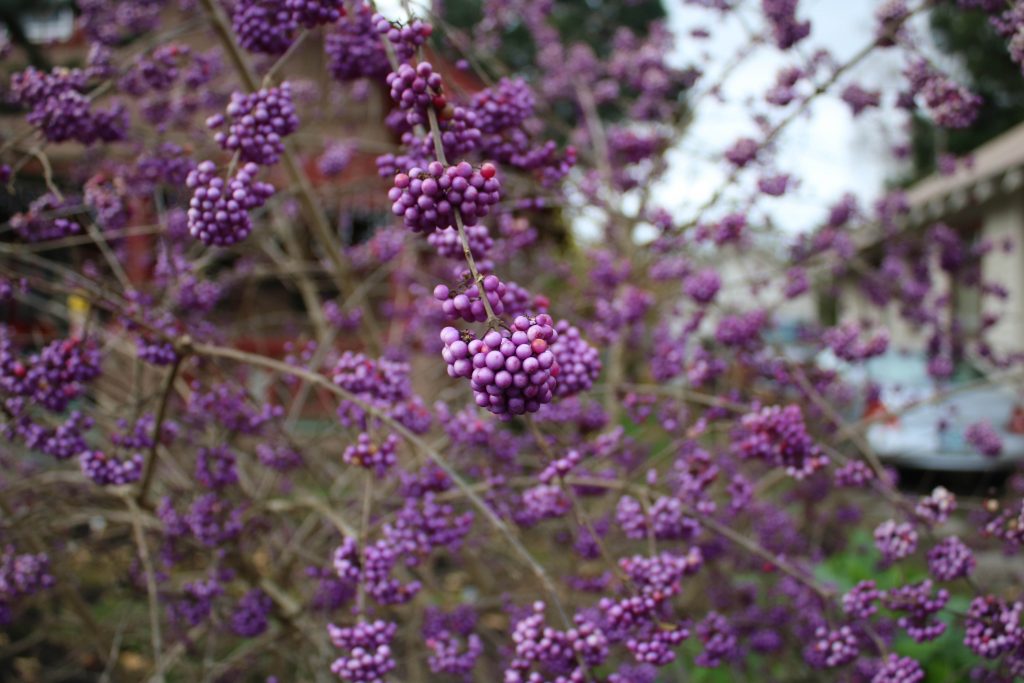 Does anyone know what it is? It was so cool looking and a gorgeous color. I’m really curious!

The rest of the weekend was uneventful. Other than meeting Santa, I didn’t leave the house much. I’ve had bronchitis for a few weeks now and Friday I left work a little early to get a chest x-ray to make sure it wasn’t pneumonia. It wasn’t, which is the good news. The bad news is that there’s really nothing I can do for it. 🙁 So I spent the weekend trying to rest. I hope this improves soon.