Being accountable, even only to yourself, is how you stay on the path to weight loss and successful maintenance. It’s a very different beast to kind of “count/guess” in your head and to actually write it down. Seeing it in black and white can often be the shock of reality that is needed. At least, it was for me.

If you need to catch up on some old posts on how to lose weight, here are some links:

Week One, Week One Check In

I see people on Twitter  posing this question often: how do you track your workouts? When I’m in the gym lifting weights, I see a lot of the serious people with a little journal keeping track of what they’re doing. I’m incredibly impressed that they can do this. It lasts about a week for me. I just didn’t want to track which machines I used, how much weight I lifted, etc. (Don’t tell Suzanne!)

I *do* however keep track of mileage for running and biking. I use simple Excel spreadsheets, nothing fancy, and just keep a log there. It helps a lot when I am training for an event. I keep track of my individual mileage as well as my weekly total.

When I first started counting my calories I wrote it down on paper in a little journal. Not very high-tech. Eventually I got an iPhone and started exploring the apps that are available out there. My favorite is by far the Cronometer because of the in-depth analysis it gives me. 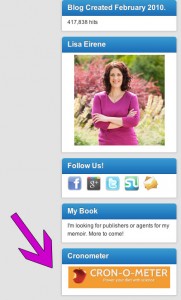 I want to make sure I am doing the right things, eating the things my body NEEDS and kind of assess what I’m eating too much of (um…sugar, carbs…dammit….). The Cronometer gives me good feedback for that.

Eating out at restaurants is one of my weak points and I’m sure you guys struggle with that, too. It’s difficult to go to a restaurant and stay on a plan when you have no idea how many calories are in something. Some of those weight loss apps have restaurant information. Check it out. 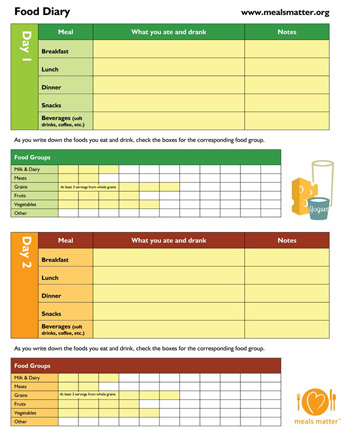 The single biggest factor in keeping the weight off is TRACKING. Keeping track of my food has helped me so so much I cannot even stress that enough. It has to be done consistently to work, too. It’s not like tracking food one or two days a week will do the trick. In order for a lifestyle change to be effective and stick, it needs to be a healthy habit!

QUESTION: How do you track everything?

After the long day I had yesterday (getting up early to swim, running errands, dentist, job interview, work) it was an easy “yes” when Michael suggested we go out to eat by the mall and then do some shopping.

After extensive internet research about the calories at the mall restaurants, I suggested Olive Garden. It’s been years since I’ve eaten there. I’m not usually fond of chain restaurants but that’s all I had to choose from.

The waitress offered us free tastings of their house red to decide if we wanted some. Oddly, she poured us both half a glass. While I’m certainly not complaining…I’m pretty sure a taste isn’t half a glass. 😉 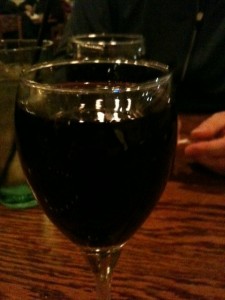 I decided to order one glass of the red. So essentially I had 2 servings of wine (because of the free “taste” AND she topped off our glasses after we drank some). Score one for the waitress!

Michael wanted to order the artichoke spinach dip. He said it was amazing. We both agreed it didn’t hold up to memory. It was pretty blah if you asked me. 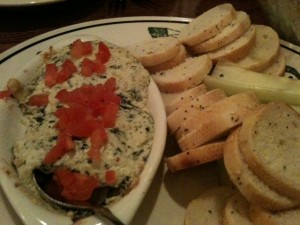 Why? Because the calories were soooo LOW. Low?! At a chain restaurant?! I am so baffled.

For example, according to their guide the Artichoke dip was 650 calories. Split between two people that’s not too bad.

The bread-sticks were 150 calories each. (Thankfully Michael kept them at his end of the table.)

Some of the lower-calorie options:

I took a double take. How is that possible that ravioli was so low? I wondered how accurate the numbers were…but then they couldn’t publish LIES, right?

I ordered the Cheese Ravioli with the salad. 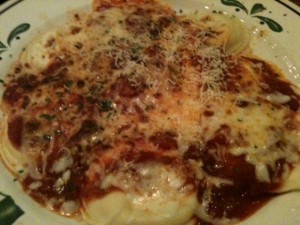 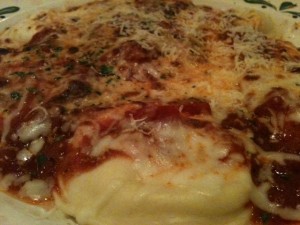 The ravioli was on the bland side. It needed garlic and maybe more meat in the meat sauce. But for 660 calories I’m happy! 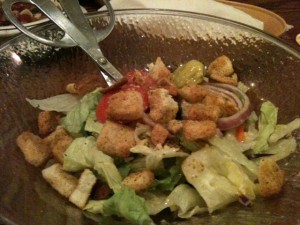 I ate most of the ravioli and saved the rest for lunch (plus 1 bread-stick). 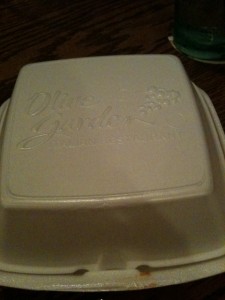 Michael got the Lasagna Classico for 850 calories. 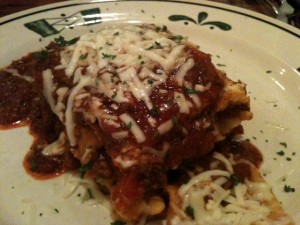 I had a bite of his lasagna and it was much more flavorful than my ravioli. We both agreed it needed garlic though.

I’m really happy with the restaurant experience–even if the food was rather bland. It was better than I could have made at home and low in calories. I’m still impressed with that.

I ate some dessert. 😉 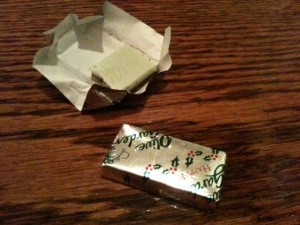 Then Michael and I went shopping. First: Target.

Then to REI where I walked out with these: 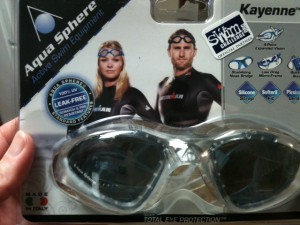 $25 goggles for $16. They claim to be leak free. I’ve yet to find a pair of swimming goggles that don’t leak. The awesome thing about REI–I can return them even after I wear them in the water! Looking forward to my swim this weekend to try these babies out.

I got home and showed Fat Kitty his (early) Yule present. 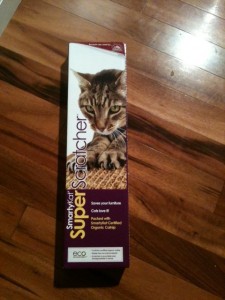 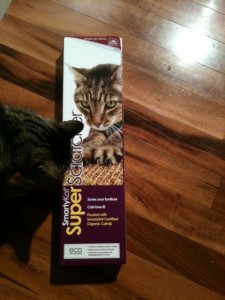 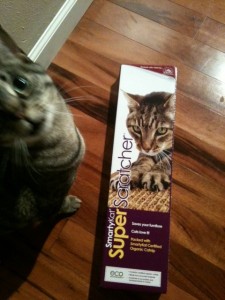 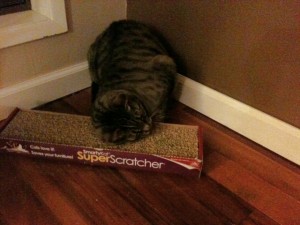 Fat Kitty went to town with his new toy and I went to bed!

QUESTION: What chain restaurant do you like that offers healthier menu options?