I used to go camping all the time. Growing up, we went backpacking as kids with my parents. At the time I didn’t like backpacking–it was a LOT of work! But looking back at those experiences, they were pretty amazing things.

Michael and I really want to give Logan lots of experiences we had as kids–like camping. BUT we are both old. Like dang, the idea of camping in a tent, sleeping on the ground……….I just don’t know. Over the weekend we did go camping (in a YURT!) and it was fantastic! 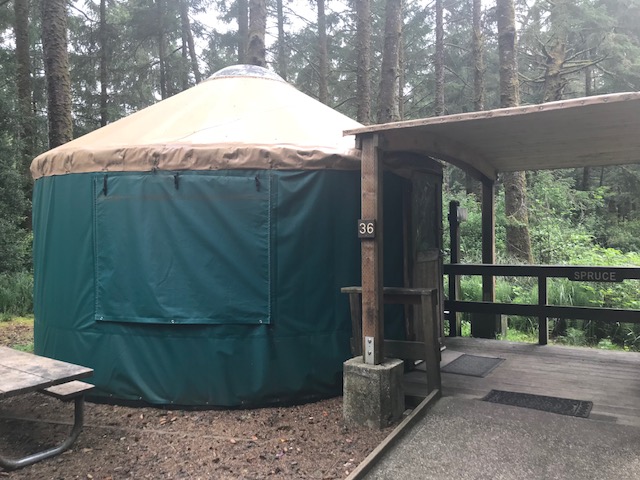 If you’ve never camped in a yurt, I highly recommend it. It’s a fun experience and keeps you out of the elements a little bit, which is a nice thing in Oregon when you can’t really guarantee what the weather would be (even in August). The downside is that you have to book them very far in advance. I think I booked our yurt 9 months ago.

We stayed at Beverly Beach about 20 minutes north of Newport, OR. It was a REALLY nice park. We’ve never been there before. It was really nice. Since it’s early in the season, it wasn’t too packed. It was pretty quiet. 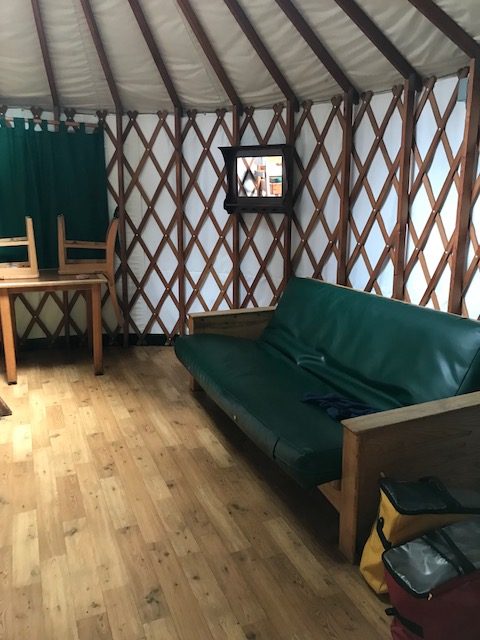 The yurt was nice and had electricity for charging stuff 😉 and a heater–which was nice because it was pretty cold at the beach over the weekend. 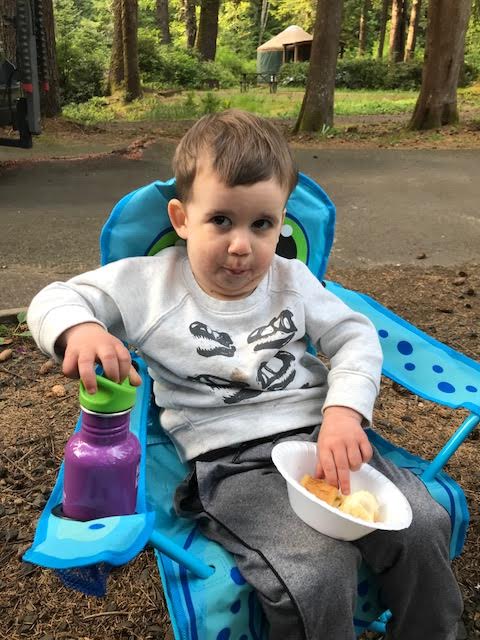 On Friday I had the day off work and took Logan to daycare for the morning so I could go to the gym and the grocery store and pack the car. Then Michael got home after lunch and we hit the road. It was perfect timing, too, because Logan took his nap for most of the drive to the beach! 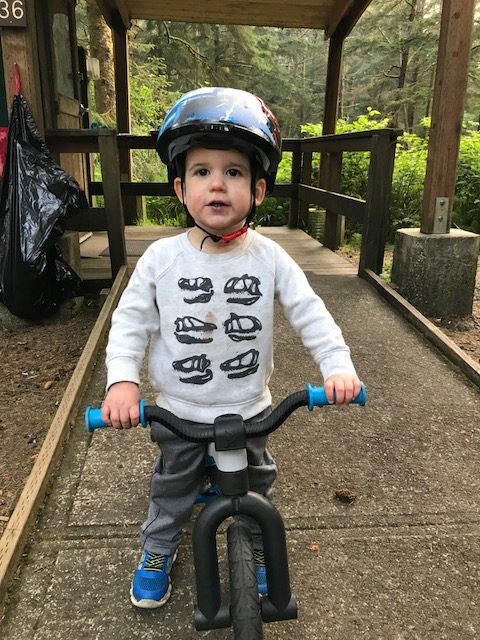 We unpacked and got settled and built a campfire. Then Logan was raring to go to ride his bike. Logan and Bella were super excited exploring our little campground. There weren’t a ton of people there. There were probably like 40% full–most of them were RVs but there were quite a few tents! 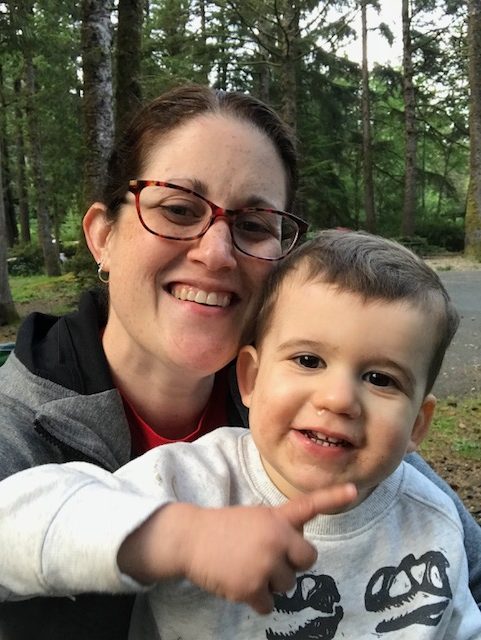 Logan had SO MUCH FUN. He was excited about exploring everything. He helped me pick up twigs for starting the fire. We could hear the frogs in the ponds arounds us (you can hear them on video on my Instagram if you want). 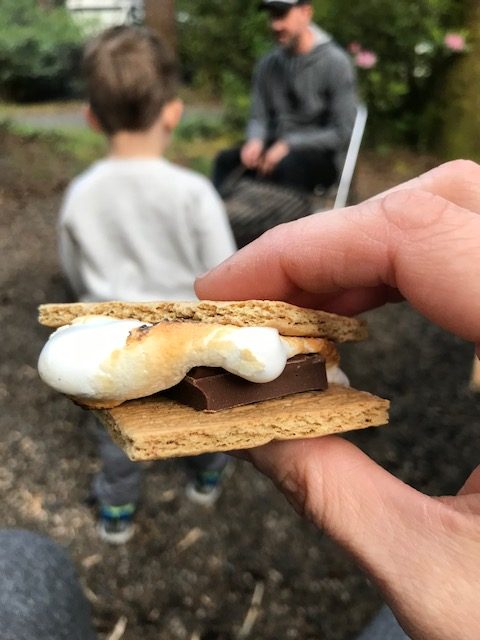 It was a weekend full of BBQ’ed hot dogs, s’mores and getting super dirty! 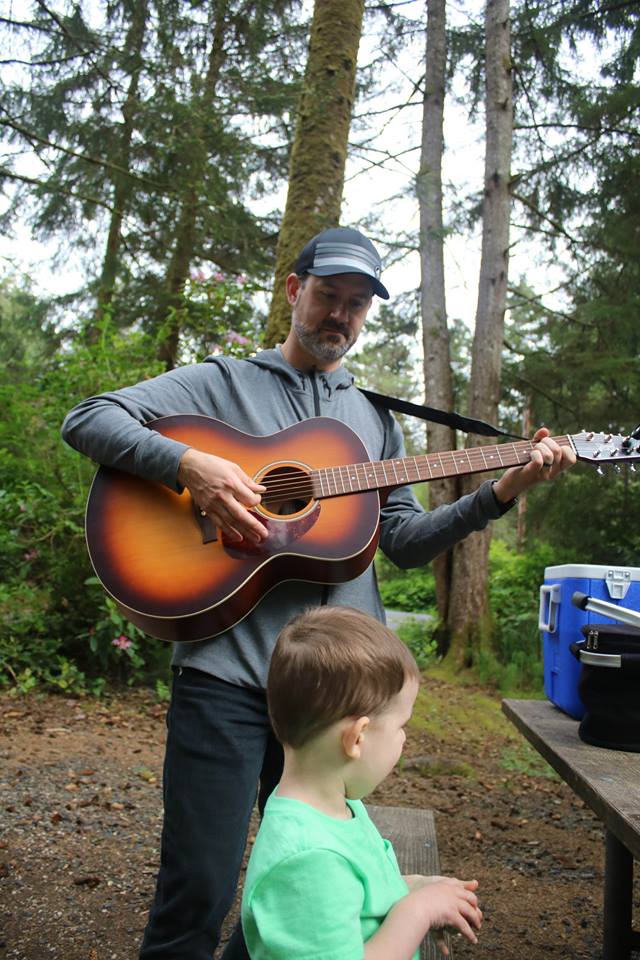 So…the downside? I thought I was super smart and got dry ice for the cooler. Except we discovered that the beer and eggs…basically everything…froze! So Michael went to the nearby store to get unfrozen stuff. We had eggs and sausages for breakfast on Saturday. 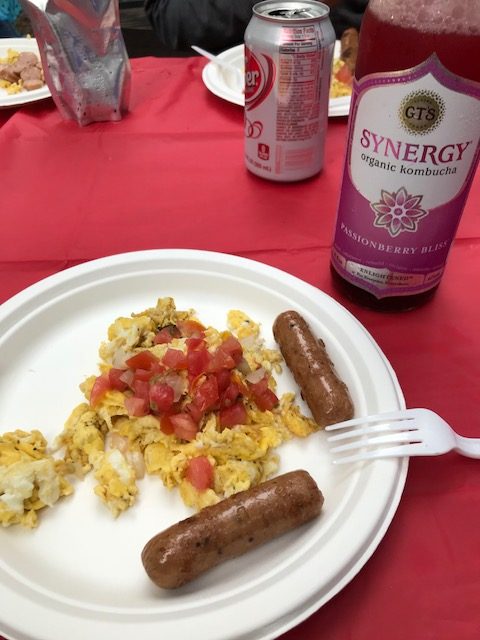 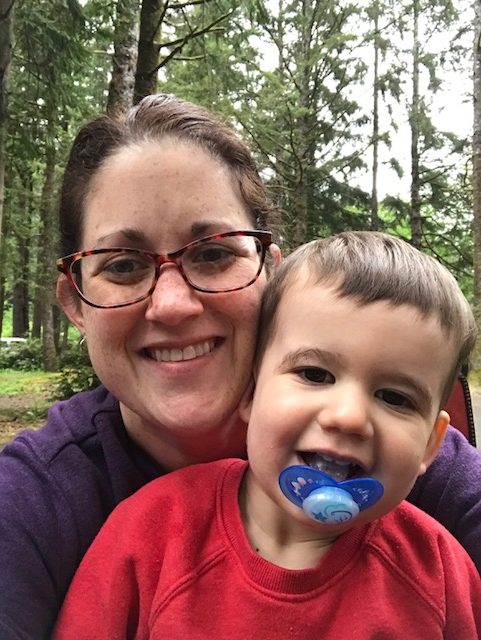 Then I took Bella with me for a run. We ran around the campgrounds and explored the different camping loops and then headed down to the beach. We ran on the beach and it was a really nice run! I was slow after being sick the previous weekend, and Bella is not QUITE coordinate to run but she did well. 😉

I got back to the campsite to find Logan napping. LOL 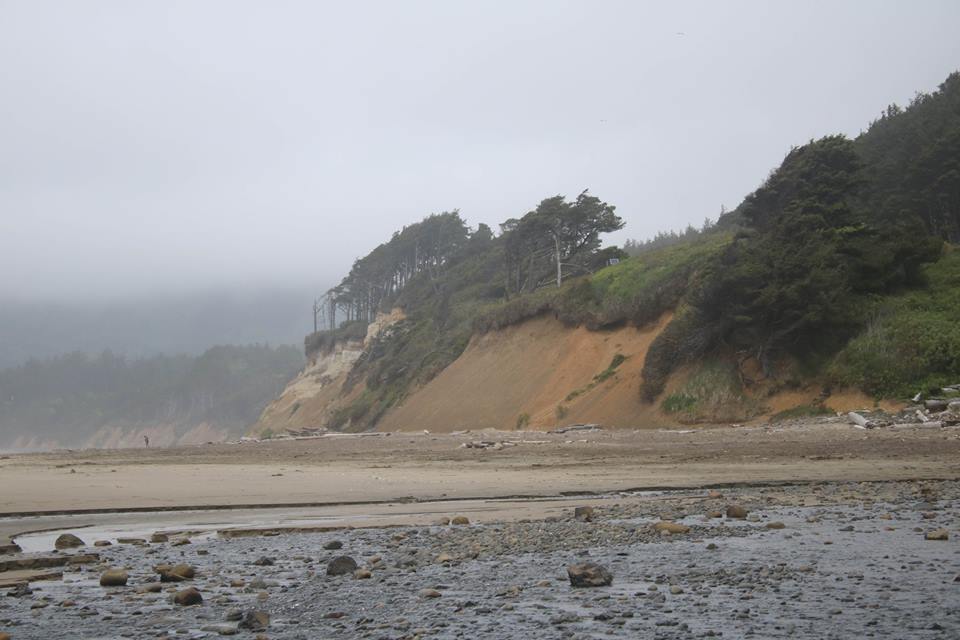 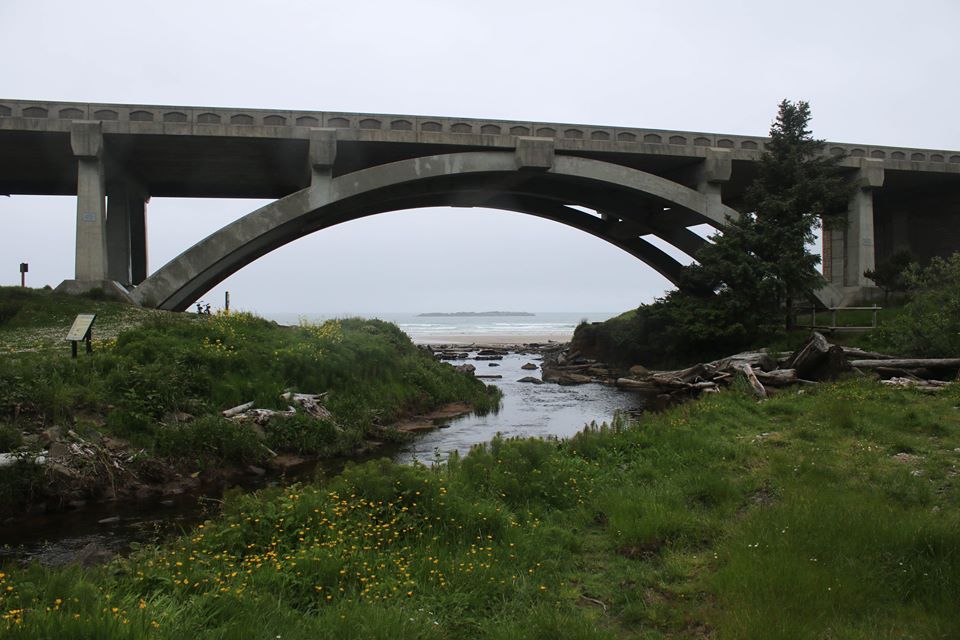 After my run I showered (the showers were REALLY nice and hot, so that was good). I took a short nap–unplanned). Then Logan woke up and we drove to Newport for lunch. We ended up at Rogue Brewery. I got a sandwich that was a little too much of everything–so big you couldn’t even take a bite–with a bowl of clam chowder and Michael got an AMAZING burger with caramelized onions and fried cheese curds on it plus beer. 😀 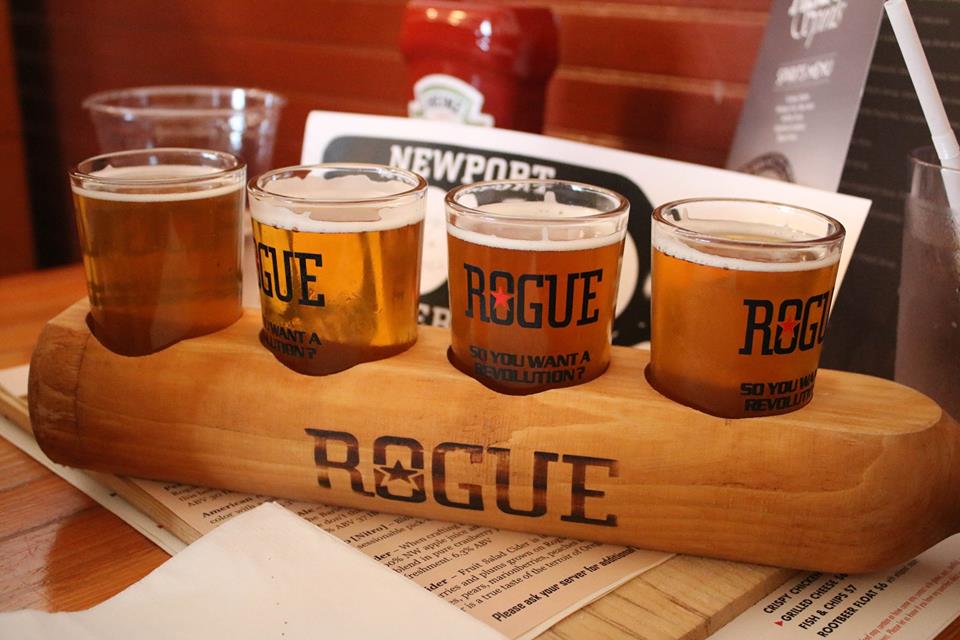 Logan’s lunch was a grilled cheese sandwich with fries and it came on a frisbee! (Which we ended up playing with for most of the afternoon back at the site.)

Then it was back to the campsite. Logan wanted to take another nap so he and Michael went to sleep and Bella and I went for a long walk on the beach.

Saturday night we had dinner and s’mores and then to bed fairly early. One of the downsides of a yurt is that there is a skylight, which does NOT make it toddler friendly! Logan was up at dawn both days. Needless to say we were both tired.

On Sunday we had breakfast and then packed everything up and went to the beach for a bit. 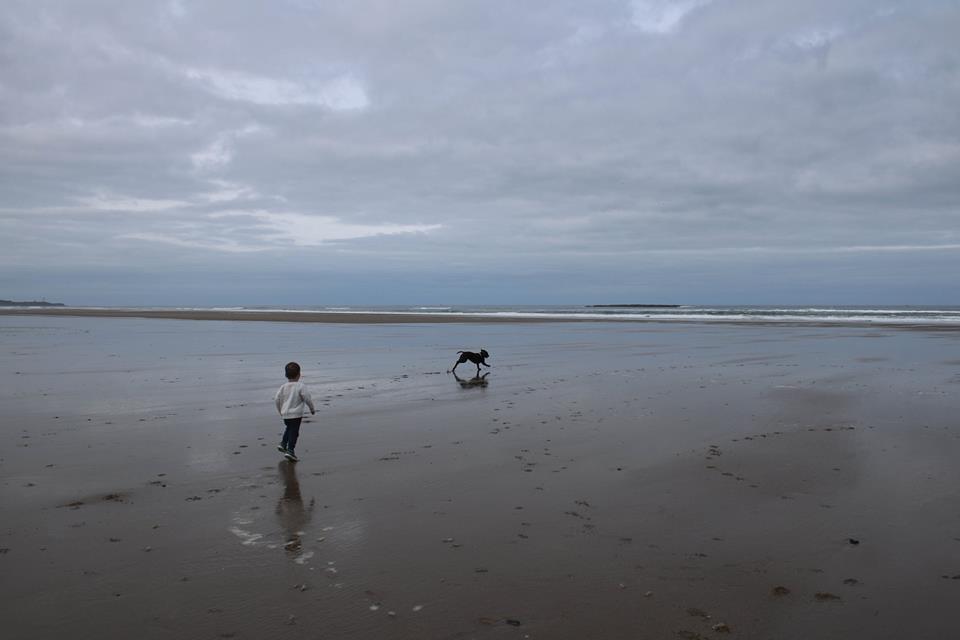 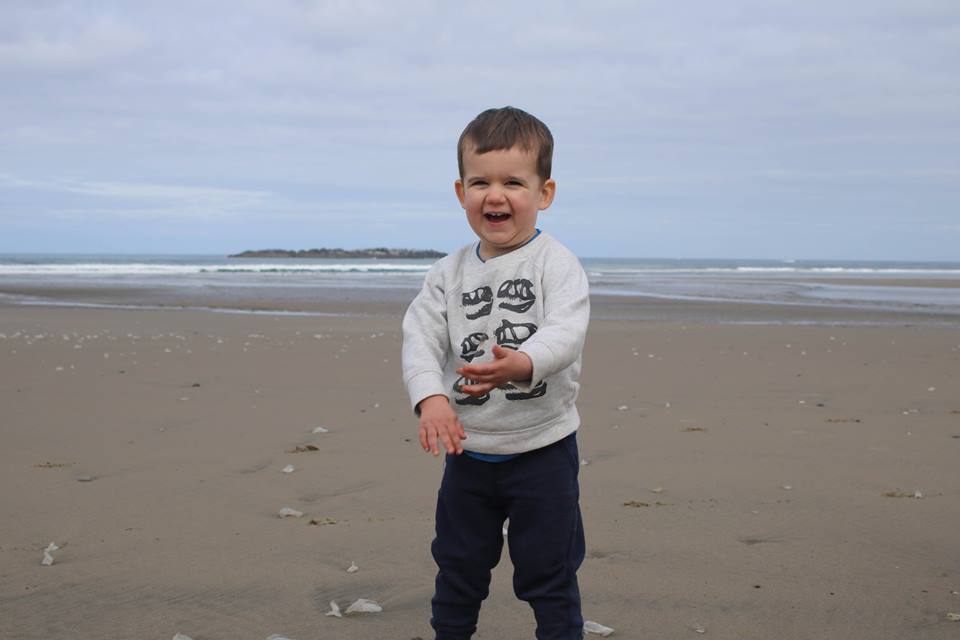 It was a nice day. A little gloomy but the sun was poking out of the clouds. It wasn’t as cold as it was on Saturday. Beverly Beach was nice and not too crowded and not windy at all. So it was a good beach to play on.

Logan and Bella had a blast playing in the sand (and getting even more filthy than ever). It was such a nice, relaxing, chill weekend where we were able to unplug a little bit. We didn’t have great service, so it kind of forced us to unplug. It was fun to just hang out as a family and do nothing!

After the beach trip, we headed home (with a pit-stop in Wilsonville for pizza for lunch). I hosed both Logan and Bella down immediately (ok, not really, but they both had very soapy baths to get the filth off!). We unpacked, Logan and I went grocery shopping and then I got to go swimming. It was nice to have a little me time to unwind. It was a fun, awesome weekend, but a lot of work! By Sunday night Logan was SO overtired he could barely make it to bedtime. 😉

I think we are going to try and go camping (IN A TENT!) this summer. I think Logan will LOVE it. 😀