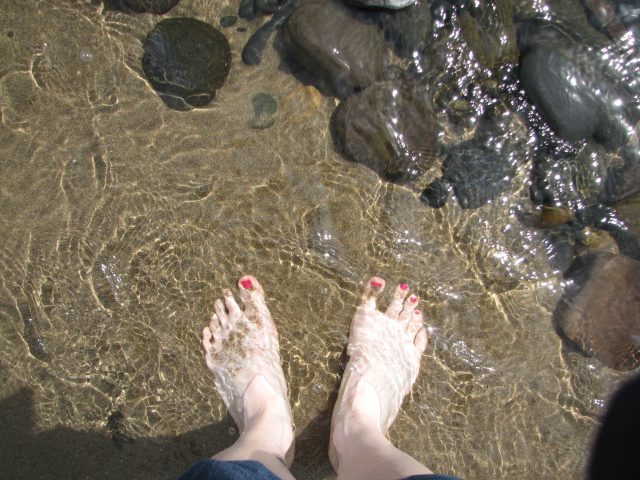 Despite the horrible stomach flu (or whatever it was) Saturday night, I slept well (the sound of the ocean always helps me sleep) and I woke up feeling much better. We went to the restaurant next door for breakfast.

I ordered very plain food and ate half of it. I ate the English muffin, the eggs and one sausage and left the rest. I wanted to make sure my stomach could handle it. Michael got a breakfast burrito that he said was delicious.

After breakfast we checked out and then went for another walk on the beach. The weather was much better. It was hot, sunny and not windy at all!

We walked south down the beach. There were rumors of a kite festival down there and I wanted to see if it was happening yet. It was still pretty early in the morning.

We walked a long ways down the beach. It was such a nice day and I was happy that I was feeling better.

I love the beach! It is so relaxing to me. Walking on the beach is a workout too. I was a little bummed that I was too sick the night before to check out the hotel pool but that wouldn’t have been a good idea with my stomach issues.

We made it to the kite festival and watched for a few minutes. The kites were exceptional. It wasn’t really windy, though, so I wondered if the Kite Festival would be a bust.

Our legs were getting a major workout as we walked the beach. It was nice! We made our way back to the hotel.

In the car I had another clue.

Michael navigated and I drove down 101 through Lincoln City. The destination ended up being Devil’s Lake. Michael had planned for us to go for a bike ride around the lake. He decided he didn’t want to do that. His legs were pretty beat up from walking several miles on the beach. I was alright with not biking. I wasn’t 100% after my stomach issues. I suggested that we drive back toward Portland and stop at Hagg Lake on the way. There were supposed to be biking trails there. He thought that was a great idea and he hoped his legs would be recovered by then. I got the final clue:

AWWWW. Michael is so romantic! We drove to McMinnville and stopped for lunch first. We ate lunch at the Golden Valley Restaurant and Brewery. We’ve eaten there before and enjoyed it. Michael got the skirt steak salad:

I had a bite and it was good! I ordered the half sandwich (turkey with havarti) and a small cup of chili.

It was a nice, slow lunch on the outdoor patio. It was warm and muggy but a pleasant experience. I did not count my calories at all over the weekend. I gave myself a break. But I didn’t eat much (and I was sick) so I am not worried at all. Sometimes it’s nice to take a break. And sometimes it’s nice to not “work out”. Our vacations are usually pretty active and we usually do a LOT of heavy fitness activities. It was nice to just do low-key this time.

After lunch we drove to Hagg Lake and checked it out. By the time we got there we were both EXHAUSTED and neither of us felt like biking. It will definitely be something we do in the future.

It was a wonderful weekend! Michael did a great job planning everything and I loved the romantic clues. 🙂 He said that I get to plan next year! I think he realized how much work goes into planning our trips. I don’t mind being the planner, but once in awhile it’s nice to have Michael create something fun!

QUESTION: Are your vacations active or low-key?

What is a Weekend?

Hood to Coast: After My First Run