I had such a fantastic swim Friday night! And this is despite the fact that the pool heater was broken when I got there and the water was downright frigid. It made me swim a little bit faster than normal and honestly, the cooler waters were rather refreshing. While I swam my laps I imagined that I was swimming across the Columbia River. I was about 75% done with my workout and starting to slow down a bit when a gentleman of South American persuasion in a very tiny Speedo asked if he could join my lane. I said sure.

He hopped in and asked in broken English,”Are you a good swimmer?”

I nodded. “Yes I am.” I started to ask if he was a good swimmer when he showed me his little scrap of paper with his workout routine scribbled on it in a language I didn’t understand–oh, it was English but it was a bunch of swimmer code that I’m not familiar with. I track my swimming in miles. Miles makes sense to me. It’s easy. When someone says do “500 yards of pick ups” I’m like…um…? Anyway. I just kind of nodded and then he said, “LET’S GO!” 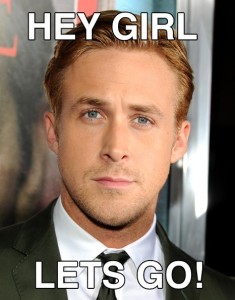 (courtesy of my friend Steve) 🙂

I had a momentary pause of “what just happened?” and then he kicked off the wall and I shrugged and did the same. I was a few seconds behind him, swimming side by side, and we did 10 lengths of freestyle. I will admit, he was good. He was fast. But we were pretty evenly matched. After 10 lengths we stopped and he said “40 second rest.”

My heart was pounding and I was slightly out of breath–something I haven’t felt in the pool in ages. I tend to do the long, endurance swims where I swim for 50-55 minutes without resting. I’m pretty fast but I’m not PUSHING myself. I can’t remember the last time I did intervals in the pool (shame on me). Isn’t it amazing how working out with someone else can push us outside of our comfort zone?

40 seconds was up and we were off again. This time we started at the same time and remained side by side for the rest of the time we swam together. There were many times where I pulled ahead of him and was clearly the faster, stronger swimmer. We stopped to rest for 10 seconds and he said, “You’re fast!” It was nice to hear the compliment.

I cannot describe just how exciting it was to be pushed out of my “norm” and challenged in the pool. When I used to swim at the community center the lap swimming lanes were always really crowded and when I shared a lane with other fast swimmers I had to step up my game so I wasn’t a jerk slowing everyone down. At my current pool, I don’t have that motivation (competition?) very often. It was a nice change.

Eventually I was done with my 1.5 miles and I told him he was on his own. He thanked me for a good swim and continued on his workout. For the rest of the weekend I thought about that awesome swim session and tried to recreate it on Sunday. I also started thinking about master’s swim…maybe I do want to try it and swim with other people….

Saturday was a crazy busy day for me–workout, pedicure, and then harvesting some of my spinach from the garden to make salads for a BBQ. It was a surprise birthday party for Michael’s stepdad and I made two salads from our garden: one was spinach with chopped apples, Gorgonzola cheese and red onions and the other was spinach with cucumber and yellow pepper. 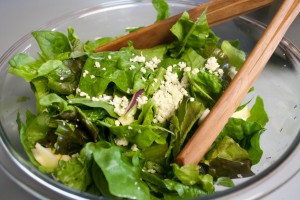 We went over to Michael’s sister’s house for the BBQ. She did up turkey burgers and hot dogs and there was a huge spread of the BBQ usuals: potato salad, fruit salad, chips, veggies and dip, pork and beans, and lots of beer. 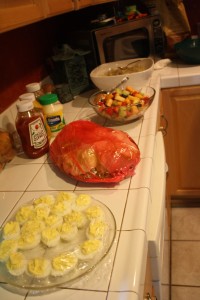 I didn’t go overboard. I kind of munched on the veggies and dip but not too much. I chose to have a hot dog for dinner and had one scoop of everything: the potato salad, one deviled egg, lots of fruit salad, the beans and my green salad. My plate was full but I didn’t overdo it. Everything was delicious!

Michael’s brother made apple pie from scratch (he makes excellent pies!) and we split a big piece with some ice cream. It hit the spot. I was glad we split it, too. I think I would have regretted eating a slice on my own (no matter how delicious it was). 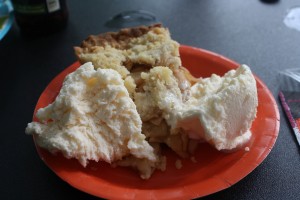 Michael’s sister Julie has four adorable dogs–three weiner dogs and one Boston Terrier. Boston Terrier is one of the breeds Michael and I have been talking about lately, so we played with Lola quite a bit. In a few weeks we’re going to “borrow” Lola for the day and see what it’s like to have a puppy. 🙂 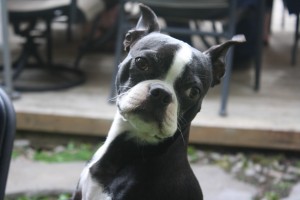 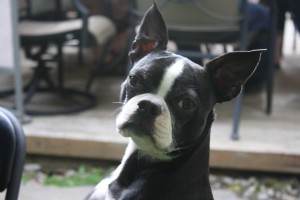 That’s Lola! Isn’t she adorable? She was sure hard to get good pictures of! She had so much energy. She’s a few years old but still seems like a puppy. 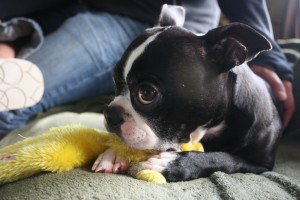 And of course, Lloyd was another adorable pup–so sweet and lovable! But sadly, weiner dogs are not in the running for our future puppy. We need a breed that we can take hiking (and I’d like to be able to run with our dog). I think the Boston Terrier has long enough legs (unlike a French Bulldog) and enough Terrier energy that it could be a running dog. 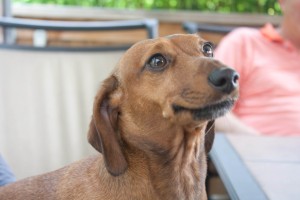 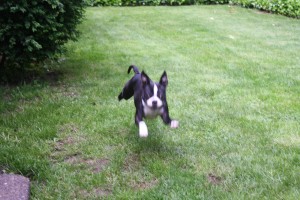 (That above “action” shot cracks me up. Lola was too funny.) It was a really fun weekend! I was glad to spend time with family and friends and of course, puppies!

No, Mr. Speedo wasn’t at the pool on Sunday morning when I took my sore body to the pool. Saturday’s weight lifting left me sore but not crippled. I was determined not to lose that “fire” of inspiration from Friday night. I got in the pool and ended up doing half of my normal swim routine but I pushed myself harder than normal. Then I spent the rest of the my time in the pool doing sprints. 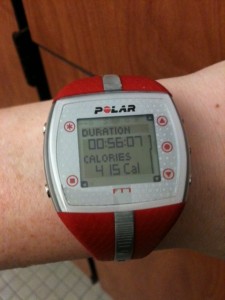 I burned more calories than I usually do in the pool and felt fantastic! My actual swim time was 53 minutes and I burned 415 calories. Excellent!

QUESTION: When was the last time you were pushed out of your comfort zone? Any of my readers have a Boston Terrier?

I’m Gonna Be One of THOSE Mothers…