I wish this post (and evening) had gone a different way, a more positive way. Recently Michael and I went to a favorite restaurant to celebrate our 4 year anniversary. We went to Eleni’s in downtown Portland. Eleni’s holds a special place in both of our hearts because it was the restaurant we went to on our first official date. To be technical, we went to the Eleni’s in Sellwood but this time we went to the one downtown because I had a Groupon for it. I am thoroughly disappointed with the downtown restaurant and will probably never go back (the Sellwood one is much better so go there!). 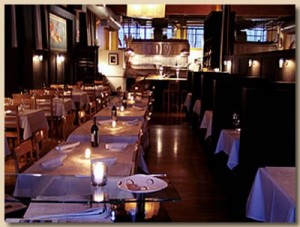 We made a reservation for 6:30 and when we arrived, they’d lost our reservation. Neither of us were too worried because even though the place was packed, they said they could fit it us. Okay. We got a table and ordered drinks.

I ordered a delicious, Earthy Italian Barbera and Michael tried to order an IPA. They were out. He tried his second choice. The waiter came back and said they were out of that as well, and brought another beer. Alright, not the end of the world.

Michael and I ordered. We ordered an appetizer called Ktipiti, which is a spicy dip made of feta, olive oil and red wine vinegar with red chili flakes. It comes with pita bread and veggies and olives. It’s the appetizer we ordered on our first date. 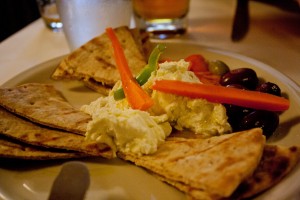 For dinner, Michael ordered the lamb special that came with roasted artichokes and spinach. I got the “Makaronia Me Soutzoukaki”–basically meatballs with red sauce and a creamy risotto with zucchini in it. The waiter said he’d bring out some bread and olive oil for us.

Our waiter wasn’t coming back to our table. I finally flagged down another waiter and asked about our appetizer and in a very condescending, snotty tone he responded that the kitchen was really back up and then walked away.

By this point, I was fuming. One of my biggest pet peeves is shitty service at a restaurant. If I’m PAYING you to treat me nice, I expect good service and I don’t think that’s an unrealistic expectation. I’m not paying to be treated like crap by a waiter. Not only that, there are so many amazing restaurants in Portland that if a restaurant has shitty service, I will NEVER go back. I’ll just go somewhere else.

At this point I told Michael that I wanted to put $12 on the table for our drinks and just walk out. I was that pissed. I said, “We are apparently at the invisible table.” I said we could go to freakin’ Taco Bell on the way home, I didn’t care. Mr. Calm-Cool-Collected talked me down and said that we should try the nice approach first and see if our waiter would rectify the situation. I conceded.

Michael flagged down our waiter and was very polite. He said that we were having a rough time in his restaurant and was hoping he could rectify that. Michael informed the waiter that we’d been waiting for 50 minutes and did not receive even bread, let alone our appetizer. 50 minutes.

The waiter was very polite and apologetic. He said he’d comp us desserts to make up for it.

Then guess what happened about 15 minutes later? Yep, you guessed it–our appetizer came out and then 30 seconds later our entrees arrived. Annoying. What I think happened is that the waiter forgot to put in our orders from the start. 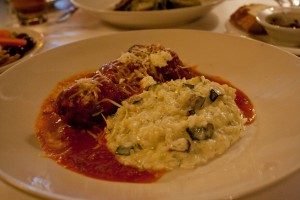 Either way, I was not a happy camper and either was Michael. BUT we enjoyed the food. The food was fantastic. Michael loved his lamb. I loved my risotto dish. It was cheesy and creamy and the chunks of zucchini went well with it. I ate about half of my risotto and 1 meatball and saved the rest for later.

The waiter brought us out complimentary desserts, Baklava and a rich chocolate mousse. Michael and I split the desserts and then we left. Sure, the comp was nice (and the Groupon made it even more affordable) but the evening had been soured. 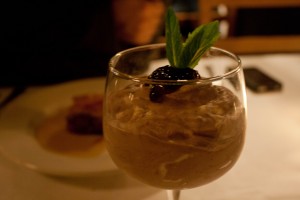 Michael and I both agreed we would not go back to the downtown restaurant again. The first time we went to it a few years ago, they brought me the wrong order! So clearly, they’ve never improved. We’ve never had a bad experience at the Sellwood one. But still. What a bummer. 🙁

But on a NICE note, Michael surprised me with gorgeous flowers–my favorites! Sunflowers! Aren’t they beautiful? 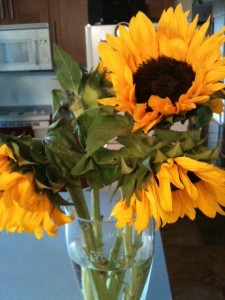 The flowers are currently in our bedroom closet where I can look at them every morning and night. And they are safe from Fat Kitty who likes to eat my flowers. 😛 And in even better news, we are headed out of town to celebrate! Talk to you guys soon.

QUESTION: Have you ever had a really negative experience at a restaurant?

14 thoughts on “A Memory Soured”