A Gem In Gresham

If you are from Portland or know the area, you know that Gresham isn’t known for much by way of pretty things to look at. But over the long weekend we discovered a hidden trail in the middle of Gresham that turned out to be a nice little hike. On Sunday after breakfast we drove out to Gresham Butte-Butler Creek Hike.  The directions on in the description of the hike but it was a little wonky. The trailhead is at a dead end street in the middle of a neighborhood. The website also says it’s SW 19th Drive but I think it was actually SE 19th Drive or something weird. Anyway, after a wrong turn or two we found the trailhead. 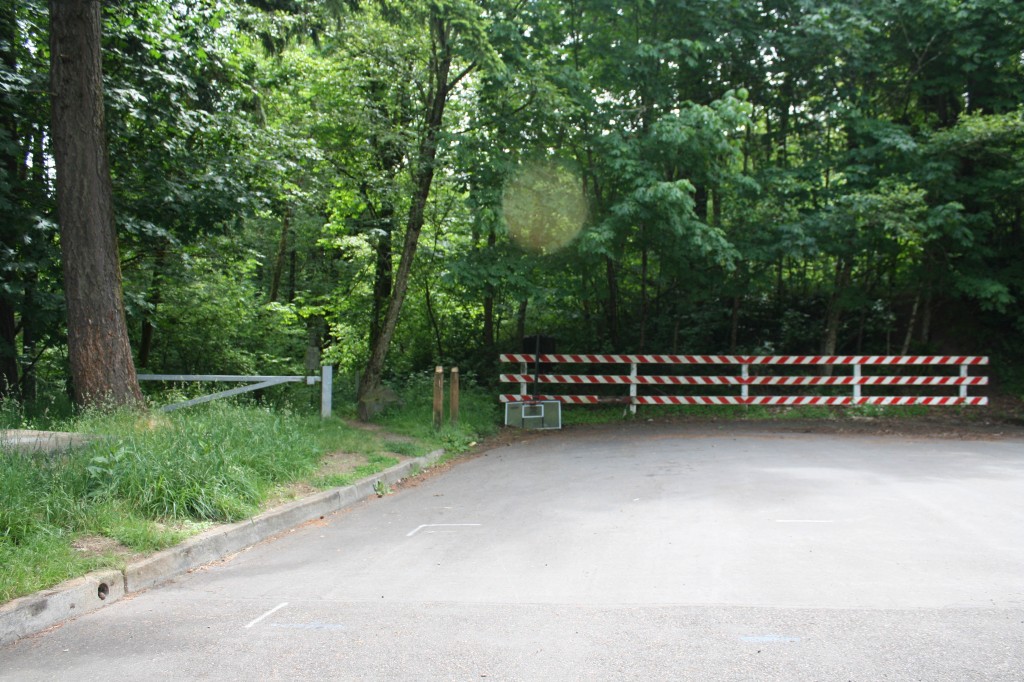 The trail immediately went into the old growth forest and started downward. It didn’t go down for very long. The trail was actually fairly steep and in some places VERY steep! 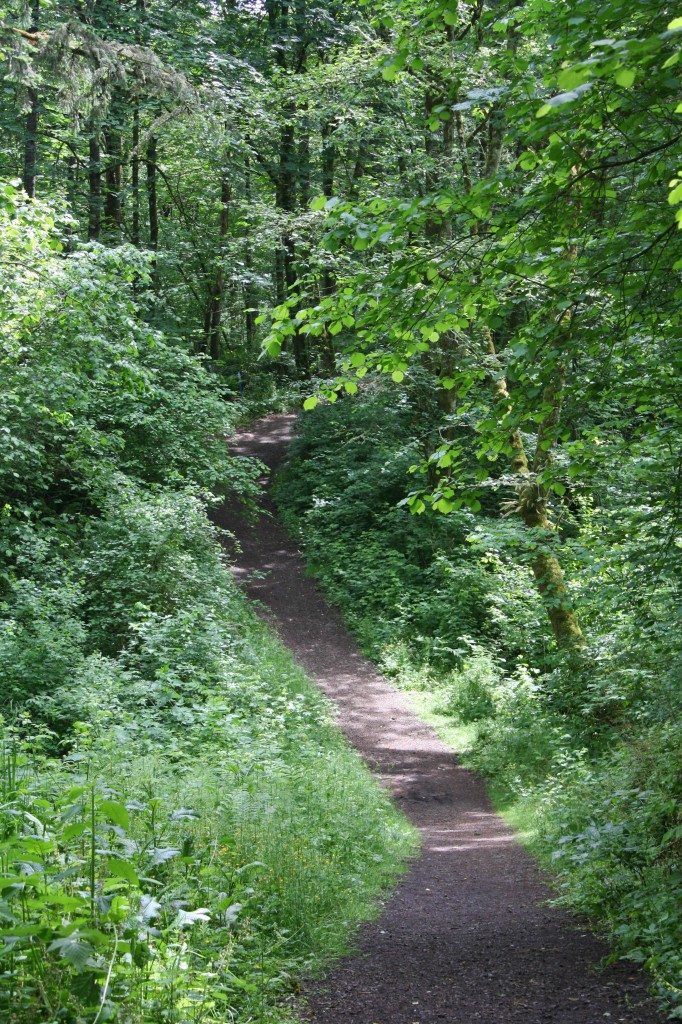 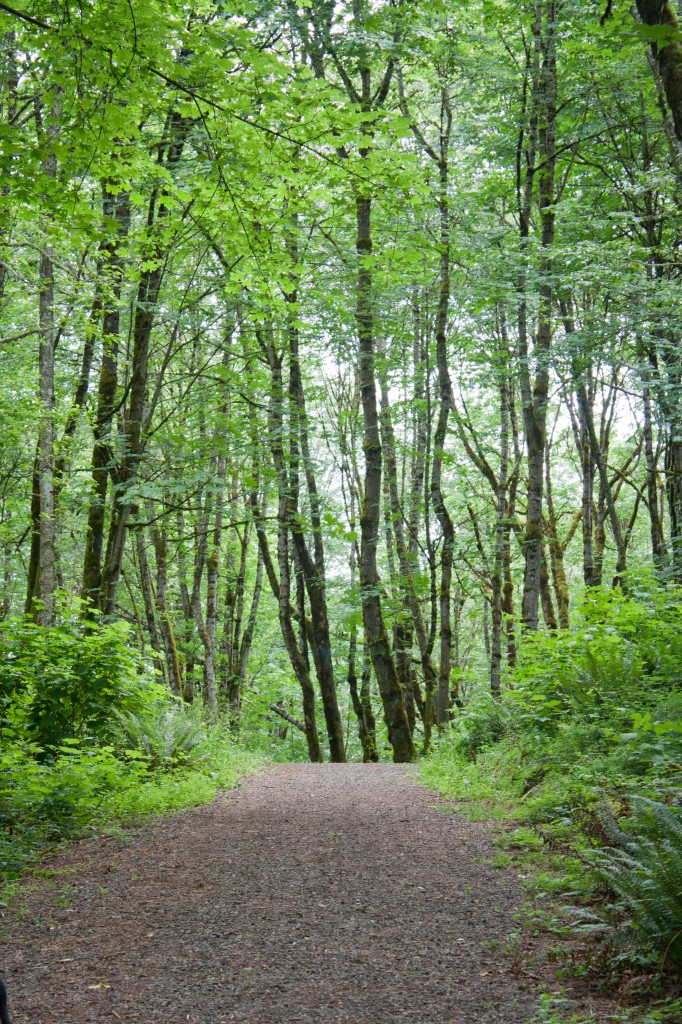 There weren’t too many other people out on the trail. It was quiet and you wouldn’t believe you were in the middle of the city or a busy neighborhood. I bet the residents of the area love this place! It would be a good trail running park. We went up a little bit of a hill and it leveled off. There was a fork in the road and we had three options. We went left first and realized it was a dead end to a street (another entrance to the trail I guess). We walked back to the fork and decided to go up the SUPER BIG hill. 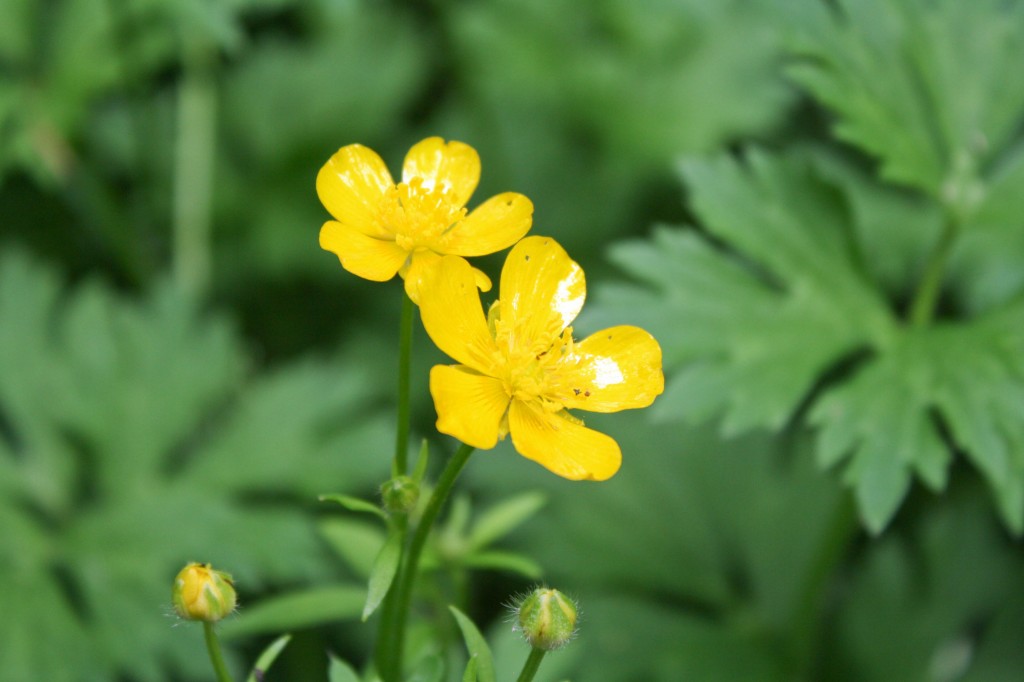 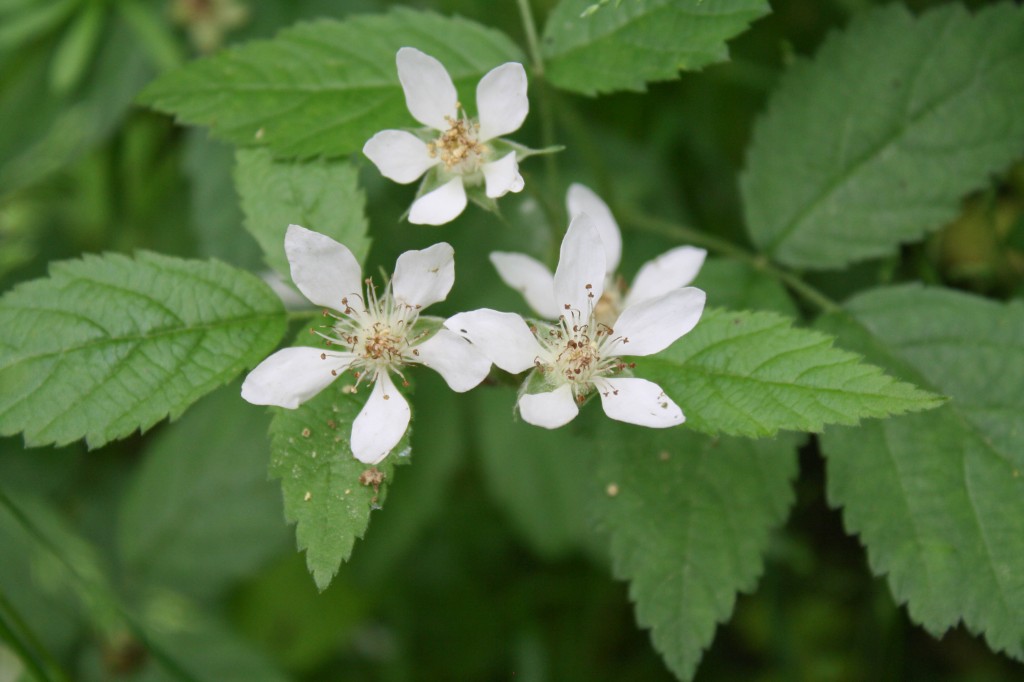 There were lots of pretty wildflowers out there; lush green ferns and mossy trees. There was also a little snake! Thankfully Bella did NOT see the snake and it slithered back into the bushes after I got this picture. 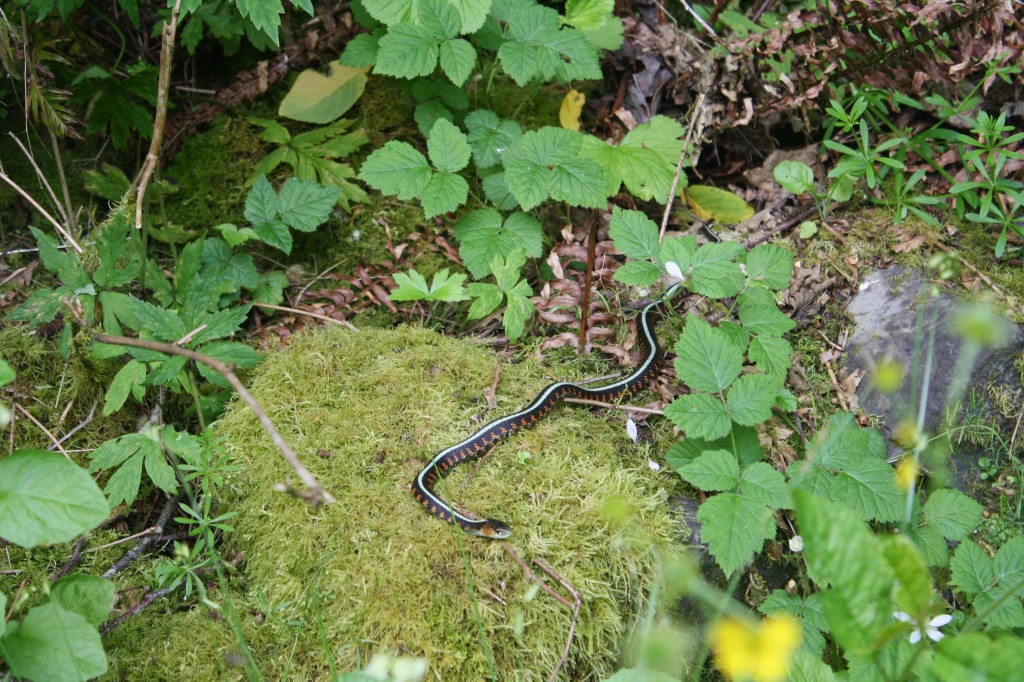 So we were going up this super steep hill that was making my heart pound. Like seriously, high 160’s. Which is abnormal for hiking! I paused a few times to rest. The hill was so steep and so long it was rather difficult. This picture doesn’t do it justice at all. I wish I could have captured just how steep it was. 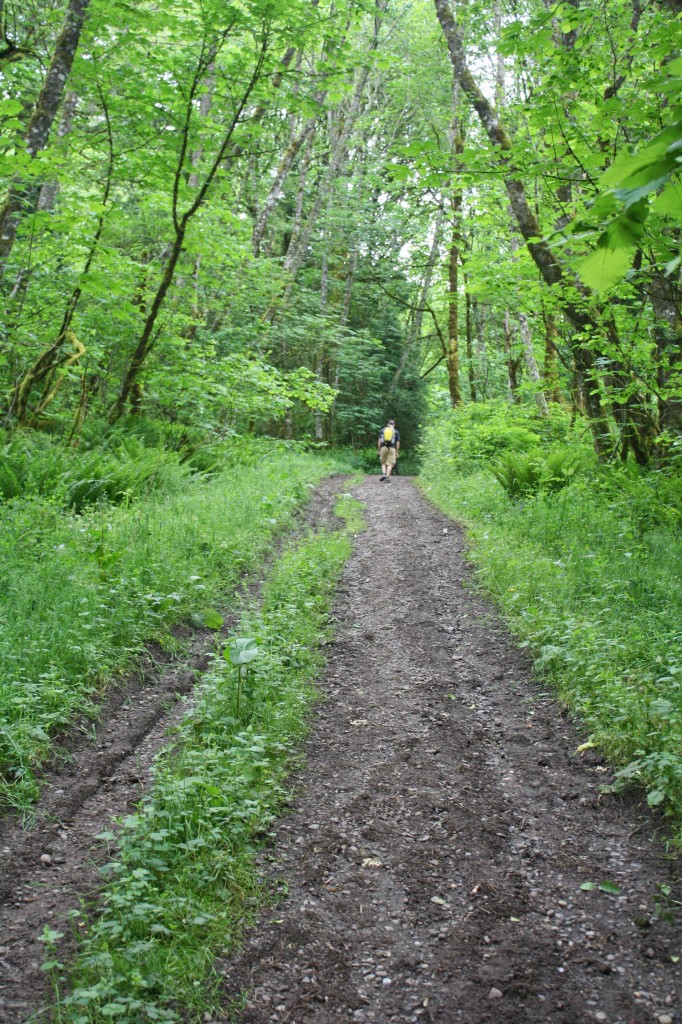 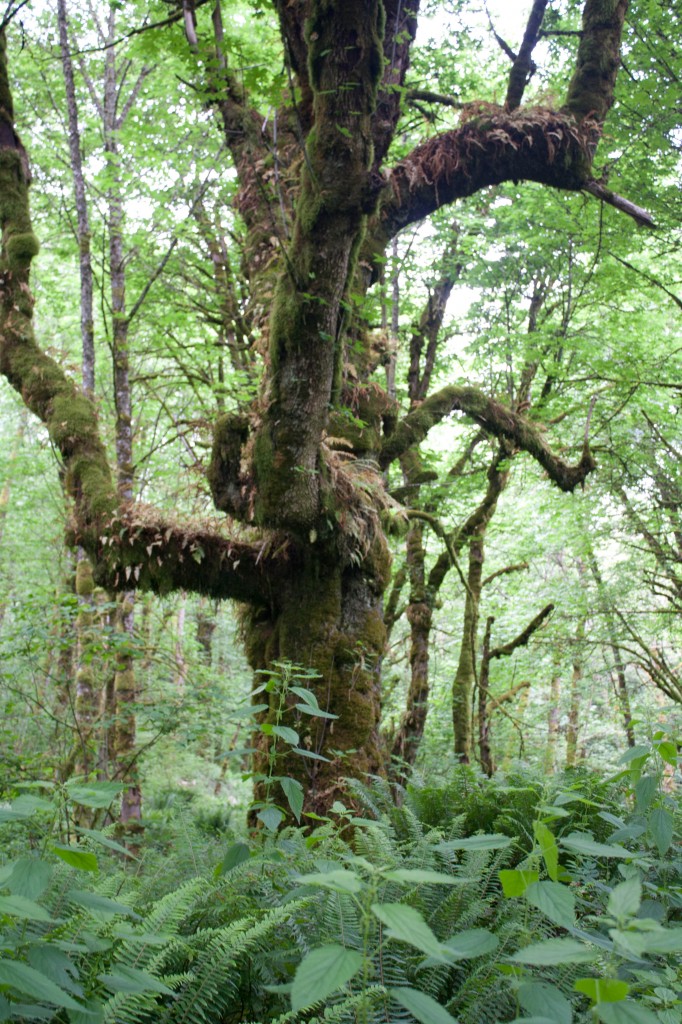 Finally it leveled off a bit. We turned a corner and came to the top where the water tower was. We decided to stop and rest and have lunch. On the way to the hike we’d stopped at New Seasons and I bought sandwiches. I got a ham and havarti sandwich on a whole wheat bun with sesame seeds, chia seeds and sunflower seeds.  It was tasty! 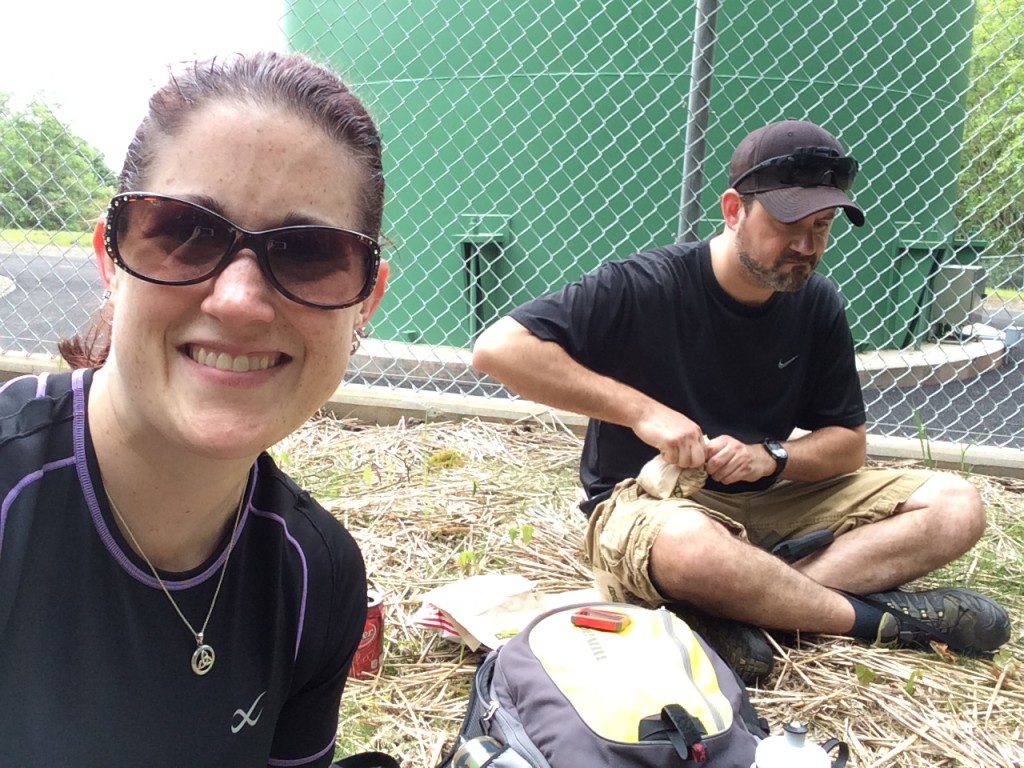 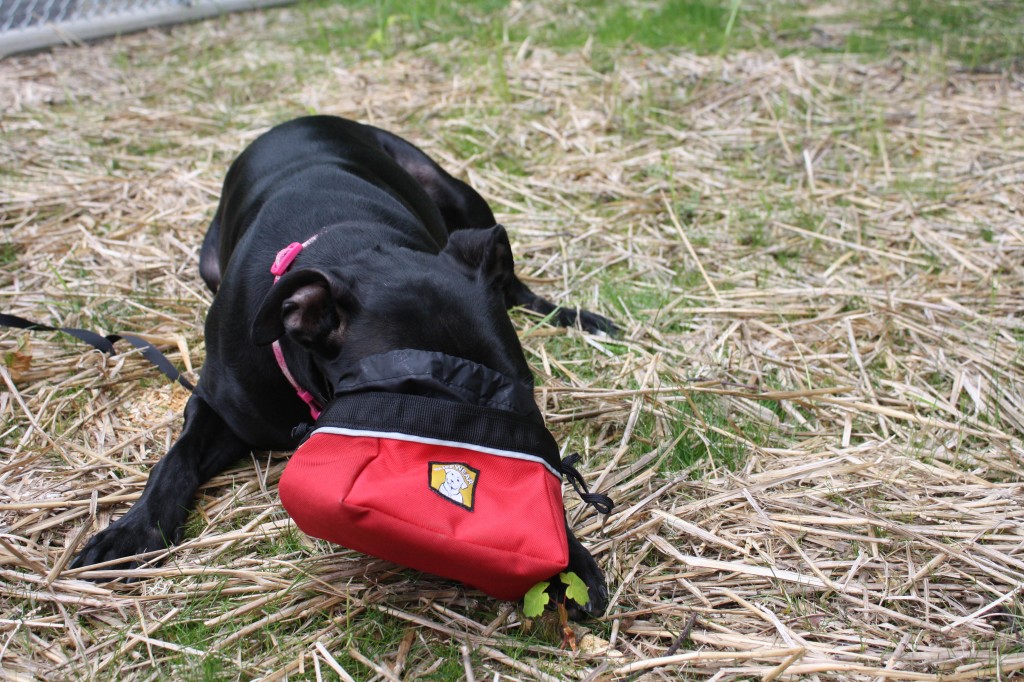 Bella was thirsty. 🙂 After lunch we continued down the trail. It looped around and started to go downhill. The underbrush was pretty thick. I guess not many travelers had been through yet this year. We crossed our fingers that we weren’t walking through poison ivy…Through the trees we came through to an opening and then saw this: 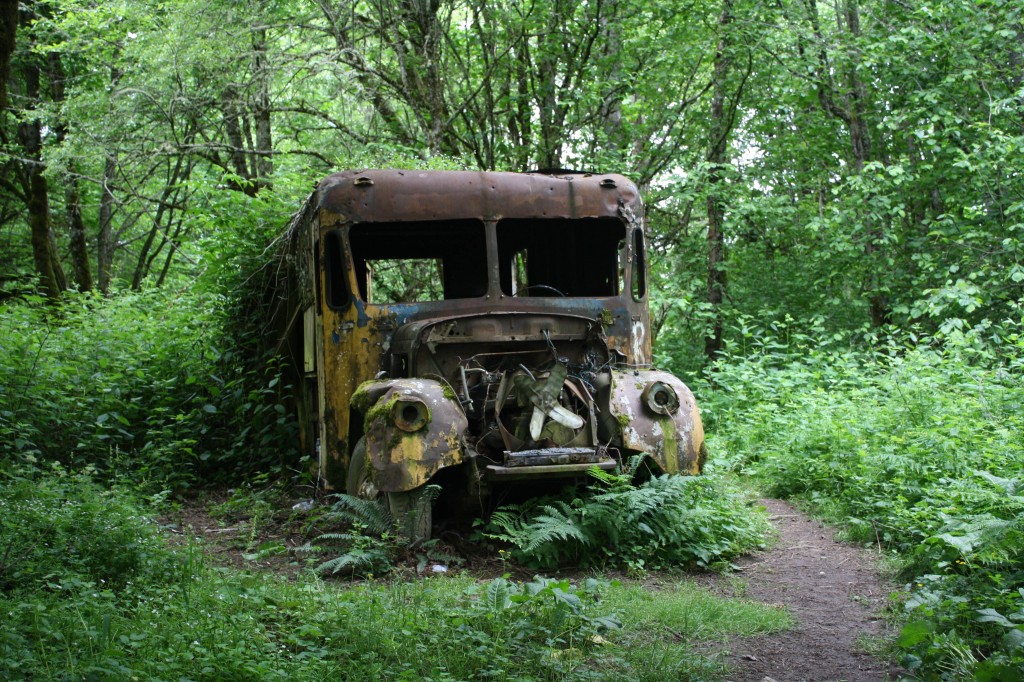 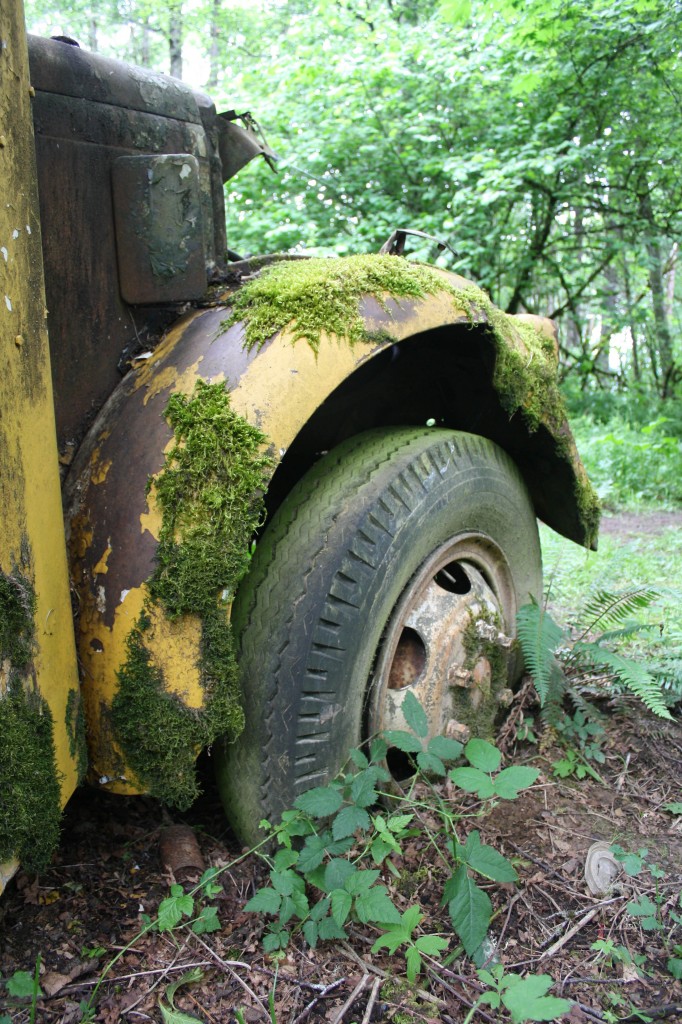 We knew from the description of the hike there was an abandoned bus on the trail somewhere but stumbling upon it in the middle of the woods was kind of startling. My first gut reaction was “Wow, this looks like something out of a horror movie!” 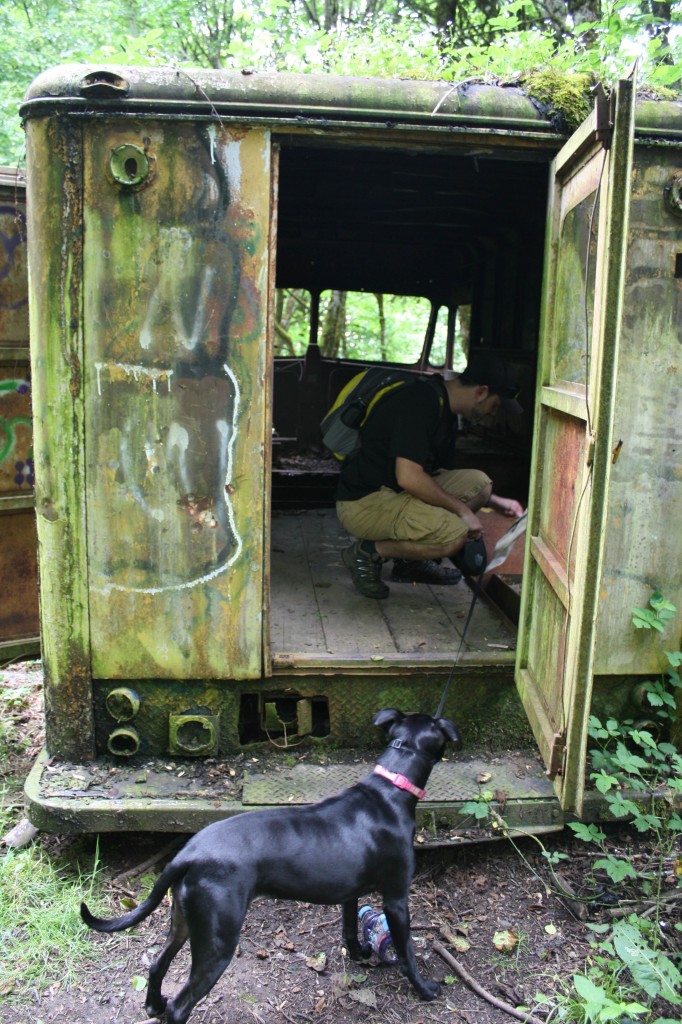 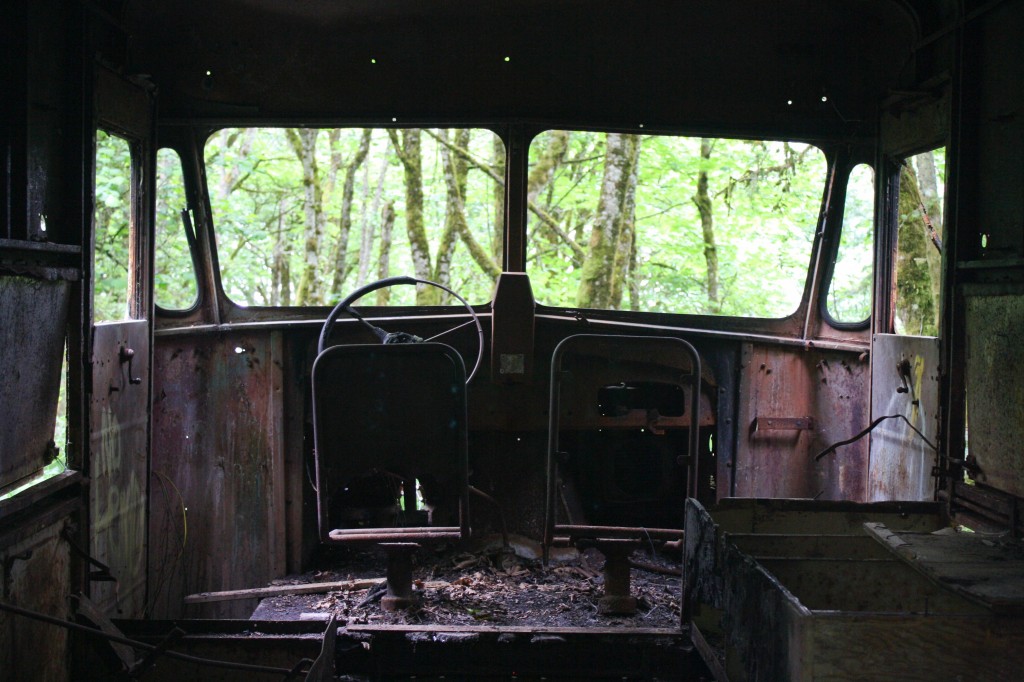 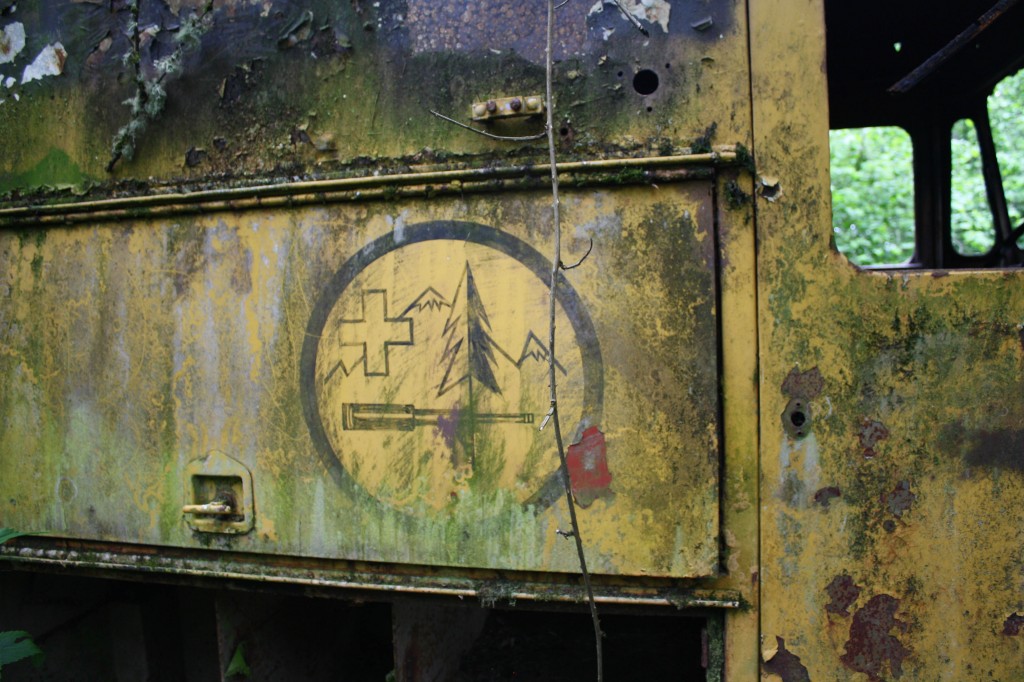 We did a little poking around to check it out. It was such a cool thing to find on a hike! The trail we took to see the bus bypassed a large chunk of the very steep uphill climb so it minimized the amount of downhill hiking we had to do, which was perfect for me and my knees! We hiked back down to the fork in the trail and headed back to the car. 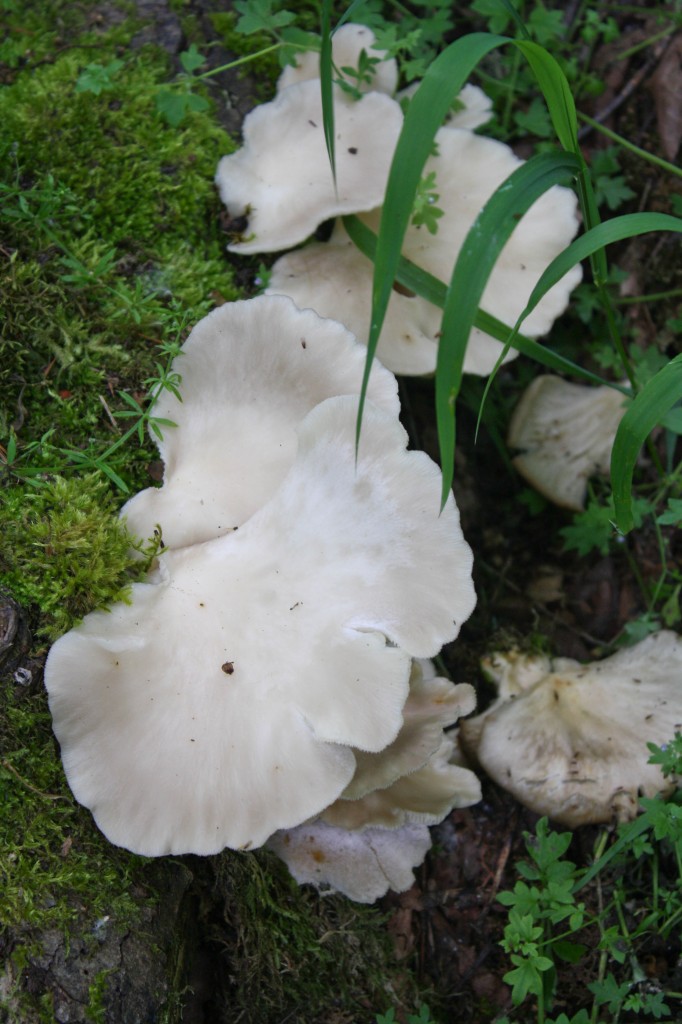 The hike ended up being 2.22 miles long and took a little over an hour. The calorie burn was pretty nice and I was happy that the downhill descent didn’t kill me (and while my hamstrings were tight the next day, that was it). 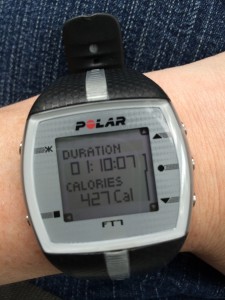 We hurried home to get cleaned up, clean the house a bit and then Michael started grilling ribs. We were having some friends over for dinner and they each had two kids roughly similar in age. (A 6 year old, a 4 year old and two 15 month old babies.) Both guys are groomsmen in our wedding. Michael was busy grilling up the ribs. We had a big salad (lettuce, hazelnuts, goat cheese and strawberries) and corn on the cob and the kids had hotdogs. 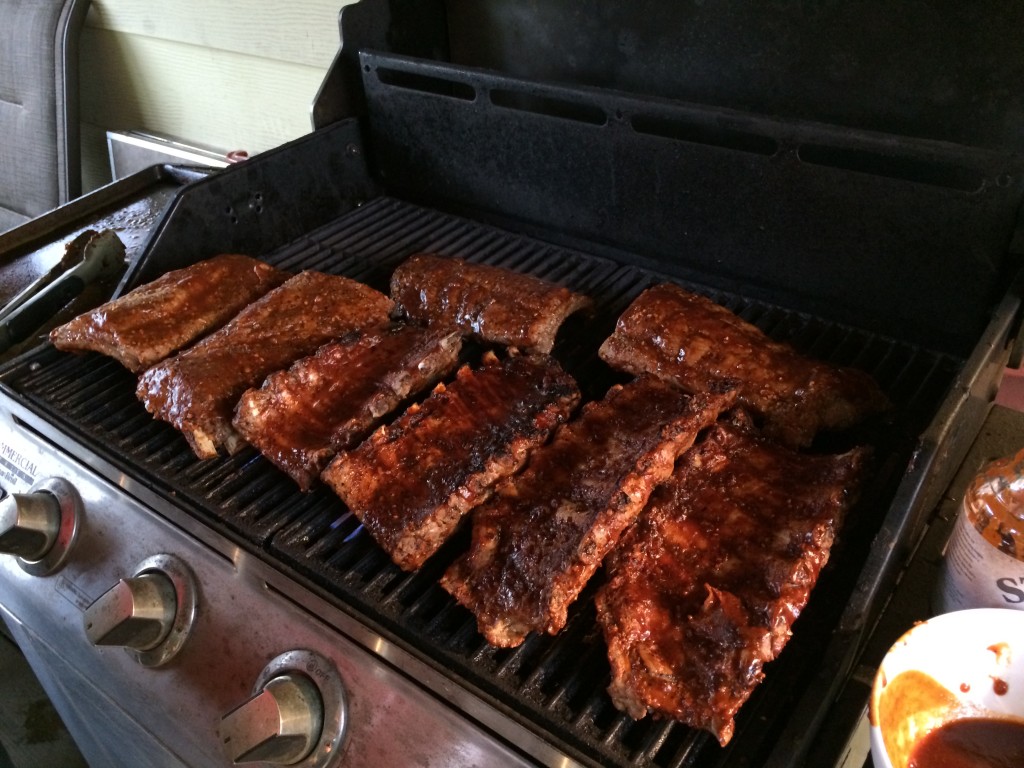 The ribs were so good! Well done Michael. It was fun hanging out with everyone. It was the first time we’d had so many people over (and so many kids at one time). Bella was nervous at first. She came out on her leash and was a little too bark-y so she went back in her crate to calm down, then came back out. We did that a few times and she eventually calmed down and wasn’t as scared of the kids. The two bigger kids (6 and 4 years old) took turns playing ball with Bella and by the end of the night they were all best friends. Bella was even licking Hans’s face. 🙂 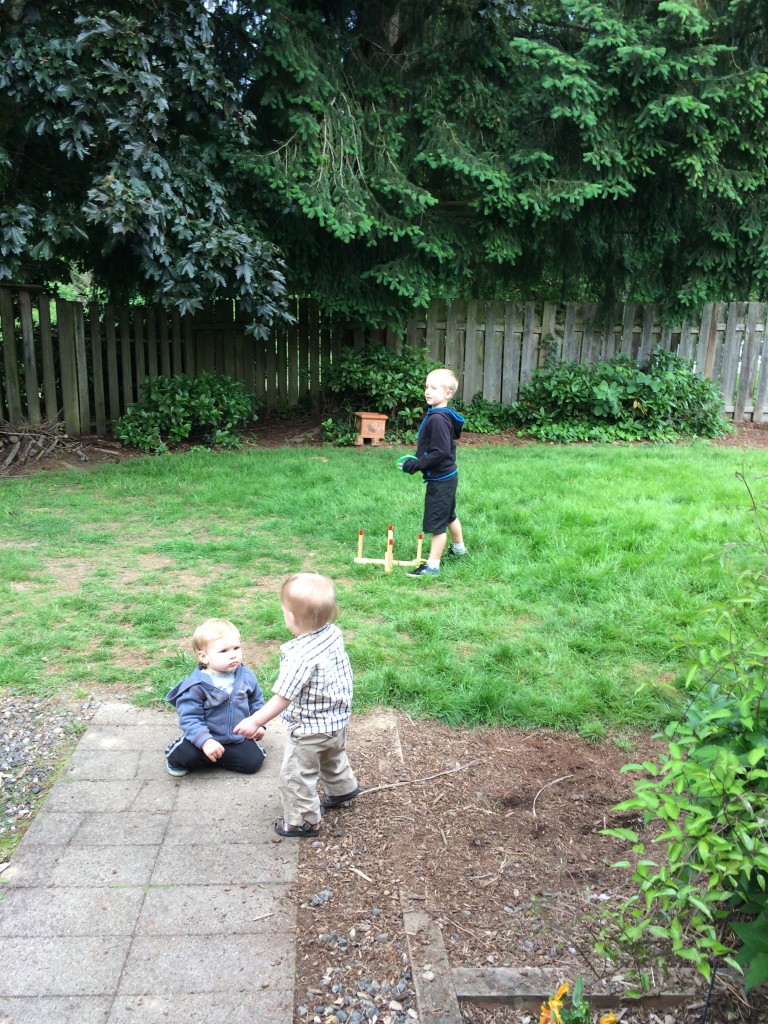 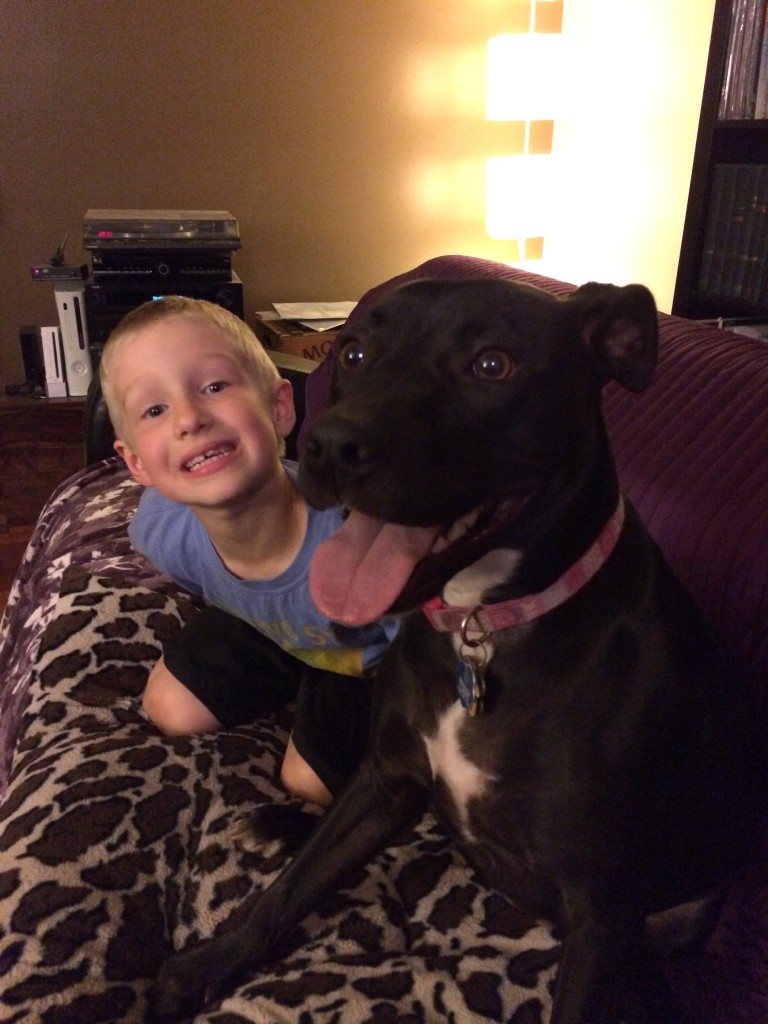 What a cute photo! Love it! Bella was so happy at the end of the night and worn out! It was a good holiday weekend. 🙂

A Little Help From Some Friends