We got home from the Portland Century about 4:30 on Sunday. All day during the ride I’d have no concept of time. I think it was because we started the ride so early (7:45). I also had no concept of mileage while on the ride. There weren’t any mileage signs posted anywhere on the route–which I think HELPED me a great deal. I showered immediately when we got home and I used the foam roller. It hurt so good. I also wore my compression tights all afternoon, which felt even better. 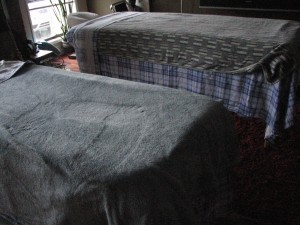 Then it was time for our massages. Oh heavenly 90 minute massages! It felt amazing. My therapist worked on my lower back, glutes and got the knots out of my shoulders and back. My hamstrings were surprisingly tight and I might have yelped a few times while he was working them out. I fell asleep several times during the massage and when it was over I crashed into bed and slept like the dead. Soooo good!

I slept in on Monday and donned my compression tights while I relaxed around the house. I was so happy I took the day off to recover. I ate breakfast–scrambled eggs, bacon and black beans. My goal for Monday was to eat lots of protein and carbs to aid recovery. Then I headed to the pool. I know I sound like a broken record but SWIMMING IS THE BEST RECOVERY. 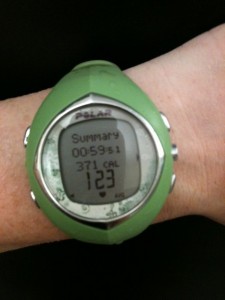 After my swim I had a high protein lunch: leftover mac n’ cheese with chopped ham in it plus a generous portion of cottage cheese. I then proceeded to eat a pint of blueberries. 🙂 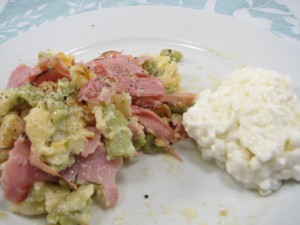 It may not be pretty, but it did the trick.

Things That Helped in the Century

There were a lot of things that made this bike experience a success. I think having a clean bike with a sparkling bike chain made a world of difference. The lessons on how to shift up hills were valuable too. I practiced for months to prepare for the Portland Century. I started commuting to work by my bike–which I grew to love–and that helped me get more mileage in on the bike. I’d hoped that I would be able to commute to work twice a week and then do long rides on the weekends but that didn’t come to fruition. Weather and timing just didn’t go in my favor this summer. I think I did the bare minimum in training in order to complete the 72 miles but I started to feel it in the end. 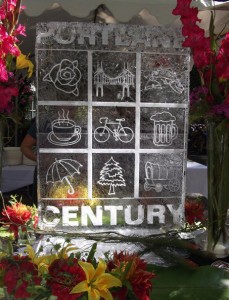 You would be amazed how something so small could help so much. I used Chamois Butt’r during the ride. I applied it before we started and reapplied it twice during the 72 miles. You can apply it to the chamois (padding) in your bike shorts, or directly onto your body–butt and girl parts, if you will. It reduces the friction that can cause saddle sores and soreness on your butt during long rides. And it really does work. I had no saddle soreness during those 72 miles (just lower back soreness). 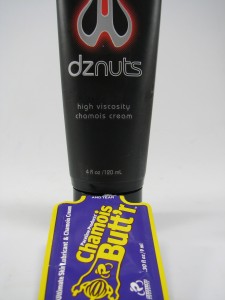 They make many products that do this. Michael uses a product call DZNuts. It’s a little weird at first but it works.

Eating something at every rest stop–and choosing items that were high in carbs and sugar–got me through the Century. I didn’t need to eat GUs at all. I never felt hungry during the ride. I may have made myself eat when I wasn’t hungry at a few of those rest stops but I think that prevented me from crashing. 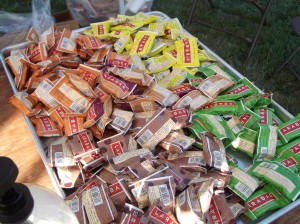 When I did Reach the Beach I crashed. I hadn’t eaten enough food, I relied heavily on GUs instead. I also wasn’t prepared for temperature changes and even got hypothermia. It was a miserable experience that I did not want to repeat.

I usually listen to music on my headphones very quietly on long bike rides. I’m careful and I make sure it’s low enough so I can hear what’s going on around me. Instead of music this time I made a playlist of “The Best Howard Stern Moments.” I had about 10 hours of the radio show, without commercials, and they were all my favorite moments of the show. Listening to talk radio really helped me. It distracted me from the endless chatter in my brain, the thoughts about my sore body, the doubts in my head on whether or not I could do 72 miles on the bike. It was great!

It’s amazing how something so SIMPLE and FREE can make or break you. Whenever I was starting to feel lethargic or mentally starting to waiver, I had some water and immediately felt better. It’s hard when you are on a bike. Sometimes I get distracted with riding and forget to drink water.

Originally when we talked about how we wanted to do the Century, Michael mentioned that he didn’t want to make many stops. I am glad that we ended up stopping at ALL the rest stops and then stopped along the way (for photos). These stops were probably what helped me stay strong on the bike for the first 60 miles. 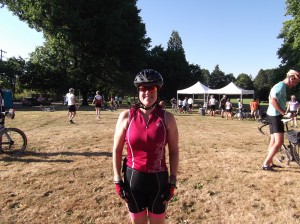 Just when I was starting to feel uncomfortable we were at another rest stop where I could walk around, stretch, work out my back stiffness and just rest. I think getting off the bike is important for these long rides.

I packed sunscreen with the vow to use it often. I’m very fair and burn easily. I did not want to end up with a miserable sunburn. There were sunscreen stations at each rest stop as well, which helped me to remember to reapply the sunscreen. I was MUCH better about it this year than I’ve been in past experiences. 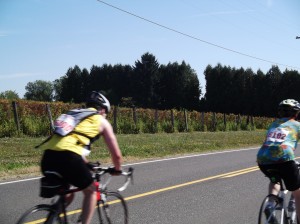 It’s especially important when biking to put sunscreen on the back of the neck and shoulders, plus the ears. I reapplied sunscreen several times throughout the Century and that prevented me from being miserable. I did get some color but I’m not nursing a horrific burn.

Having a partner riding with you to offer moral support is a must. When things get hard you pull each other through. 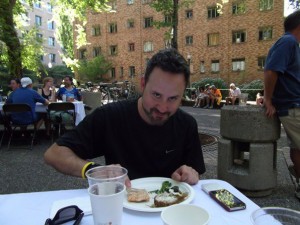 When things are going great you have someone at your side to share the happy memories!

What Would I Do Different For Next Year

Each organized ride, training session and even my running races, teach me something new. I learn that I am strong and can accomplish anything I put my mind to. A good part of cycling and racing is mental. If I can handle the mental challenges of these events I can succeed. So what would I do differently and what do I need to work on?

I think if I focus on strengthening my core that will help with back discomfort on the bike. Getting more mileage in will also prepare me for longer bike rides. My hope is that I can continue commuting to work as long as the weather holds up.

QUESTION: What’s your favorite way to recover from hard activities?