On Saturday I hit the gym early for some reason. It wasn’t crowded, which was nice. I did weights (I’ve been adding pull-ups and chin-ups to my routine lately!), my physical therapy exercises and body weight exercises and then went for a run on the treadmill. It was one of those runs that was FABULOUS. Where I didn’t feel the need to walk, that I felt like I was too slow and sped up the treadmill and my legs just wanted to RUN. It was a fantastic 2.75 miles and then I walked down the stairs in the gym and all of a sudden my knees were like “we are not HAPPY!!!!” It wasn’t good. 🙁 Despite that my knees were doing okay, as long as I didn’t go down any stairs…I burned 646 calories! Wowza.

Michael and I went to the Mississippi Street Fair next. It’s been about two years, I think, since we’ve been. Of all the street fairs in Portland it’s my favorite. I like the vibe and there’s a bunch of different stages with different kinds of music playing. It’s always crowded, so be prepared. This year it wasn’t quite as crowded as it was in the past, so it was slightly easier to walk up and down the street checking out the booths. 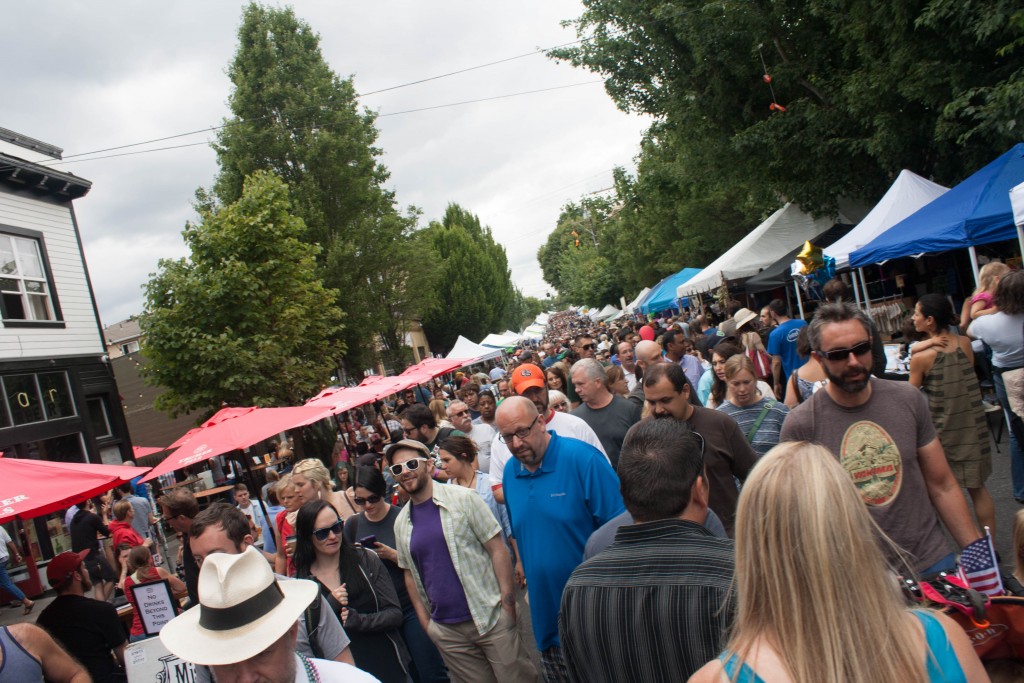 First stop: LUNCH. We decided to bag street food and went straight to a restaurant. Little Big Burger. It’s been a really long time since I’ve been there. I like that the burgers are not ginormous. I got a cheeseburger and we split an order of their AMAZING to-die-for truffle fries. 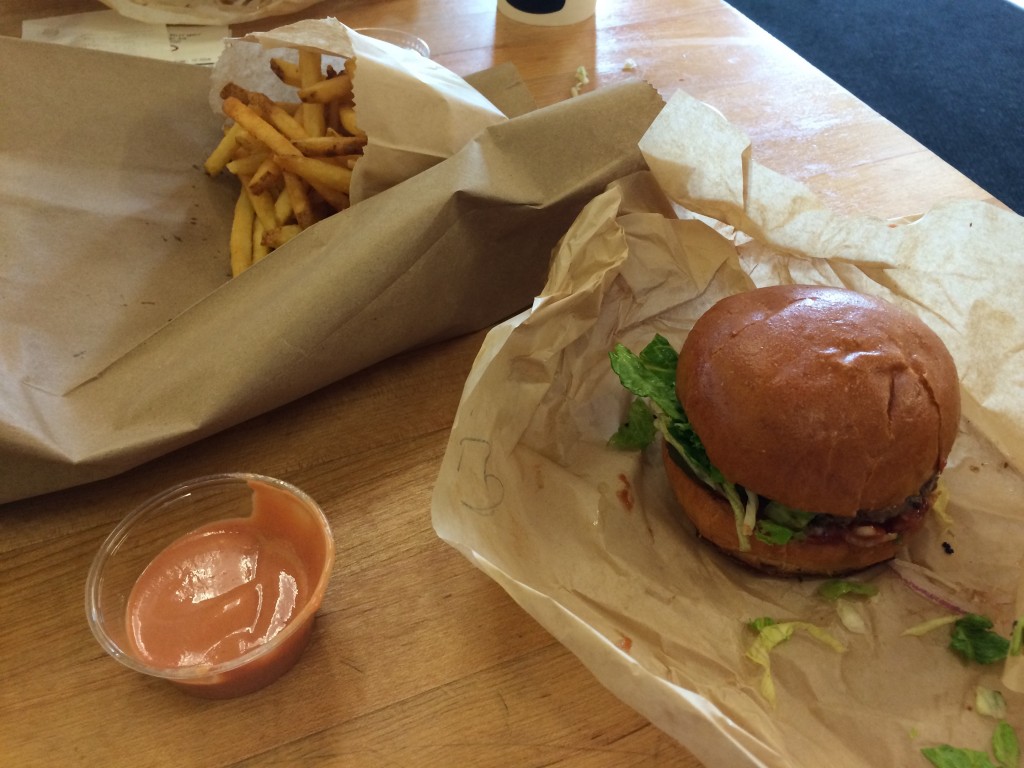 We wandered around and saw some of the booths (lots of arts and crafts and jewelry) and there was music everywhere. I’m not sure what this instrument is but it was fascinating to watch. 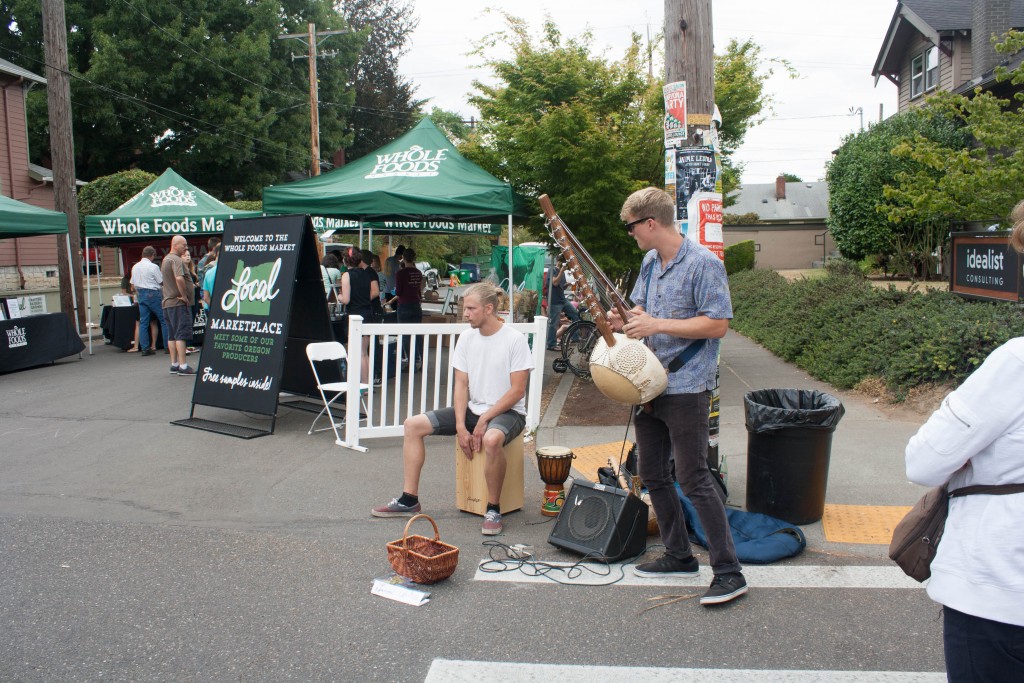 Does your cat need a bowtie? I think it might! I almost got Fat Kitty a bowtie (this photo kinds of looks like him!) but I knew he’s never let me put it on him and would either a) give me the grumpy cat face or b) immediately take it off and destroy it in a rage. 🙂 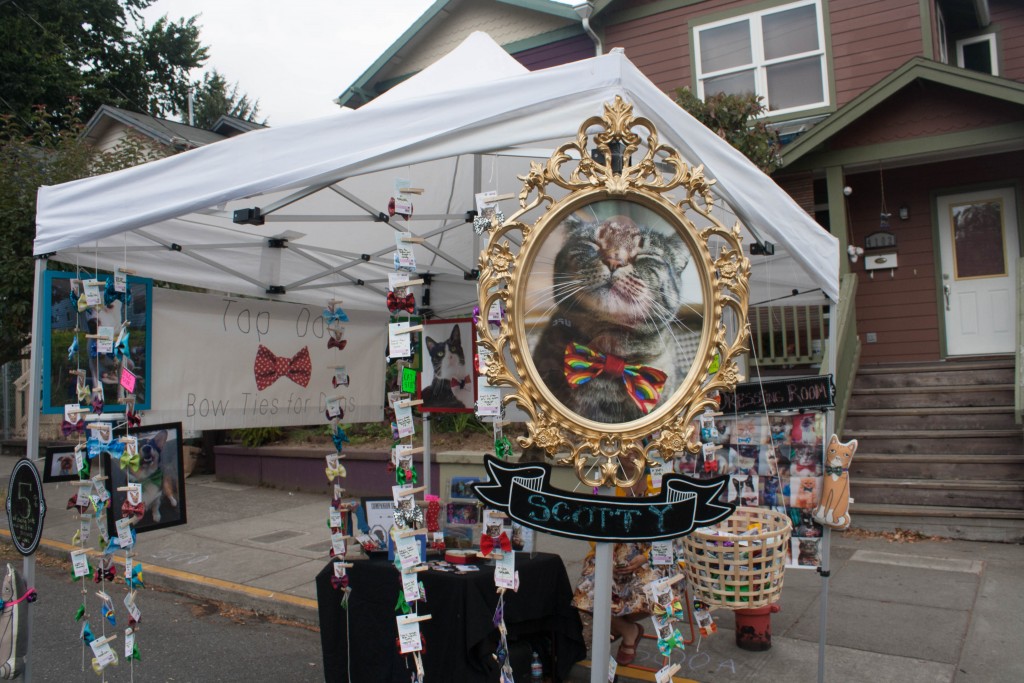 We walked around a little bit and met up with some friends. Our friends that came over for the 4th of July were hanging out doing the kid stuff (bouncy house) so we hung out with them for a little bit. 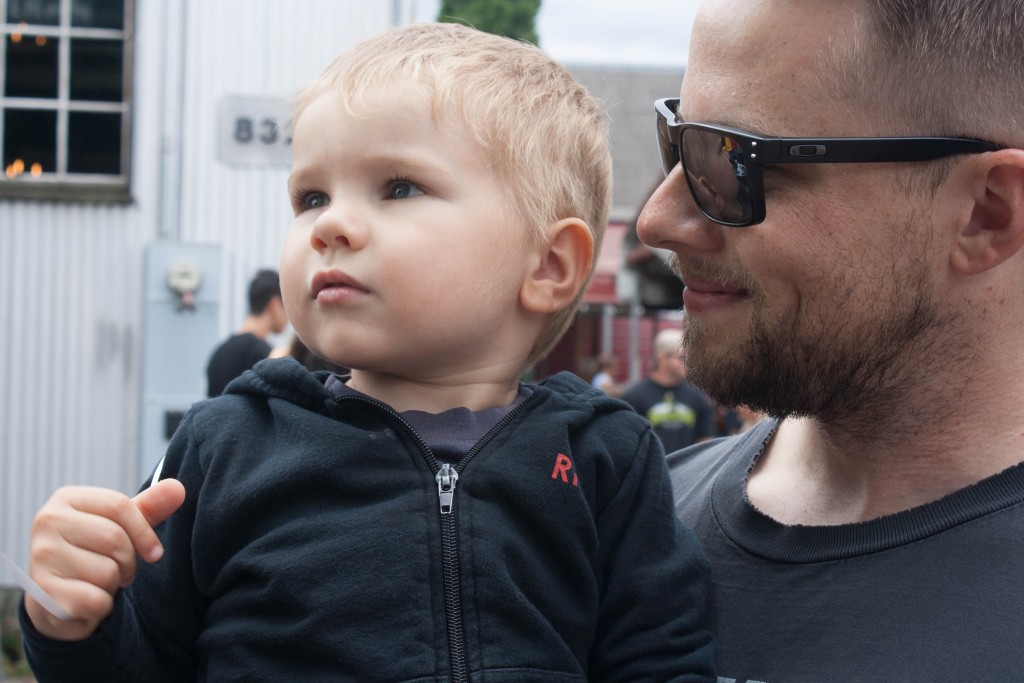 Michael got two t-shirts and I got one (I will wear the shirt soon and post a photo–it’s so Portland). I ALMOST got a Sasquatch bumper sticker. Almost. 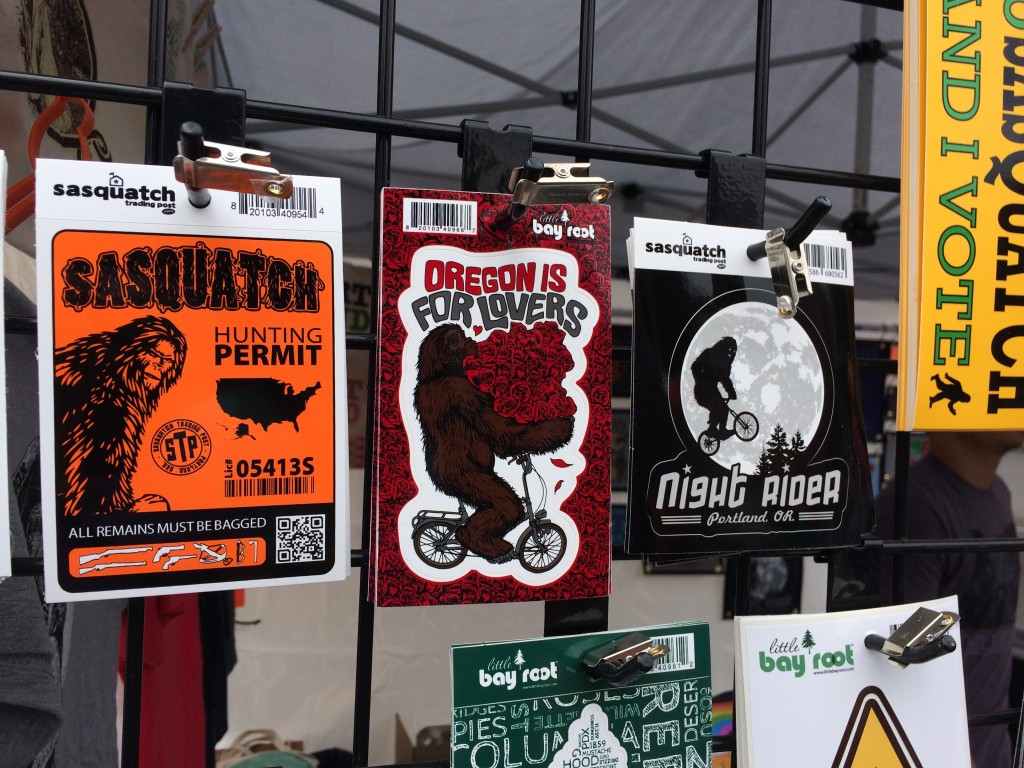 We left our friends and met up with some other friends, who also have a daughter the same age as Rowan (2.5). It’s such an adorable age. We walked up and down the length of Mississippi with them and looked at the booths (she got a Kimchi Hot Dog for lunch which really fascinated me–I might need to try that combo soon). I bought a jar of kimchi from the hot dog vendor (can’t wait to eat it!). Then we ended up at Ecliptic Brewery. 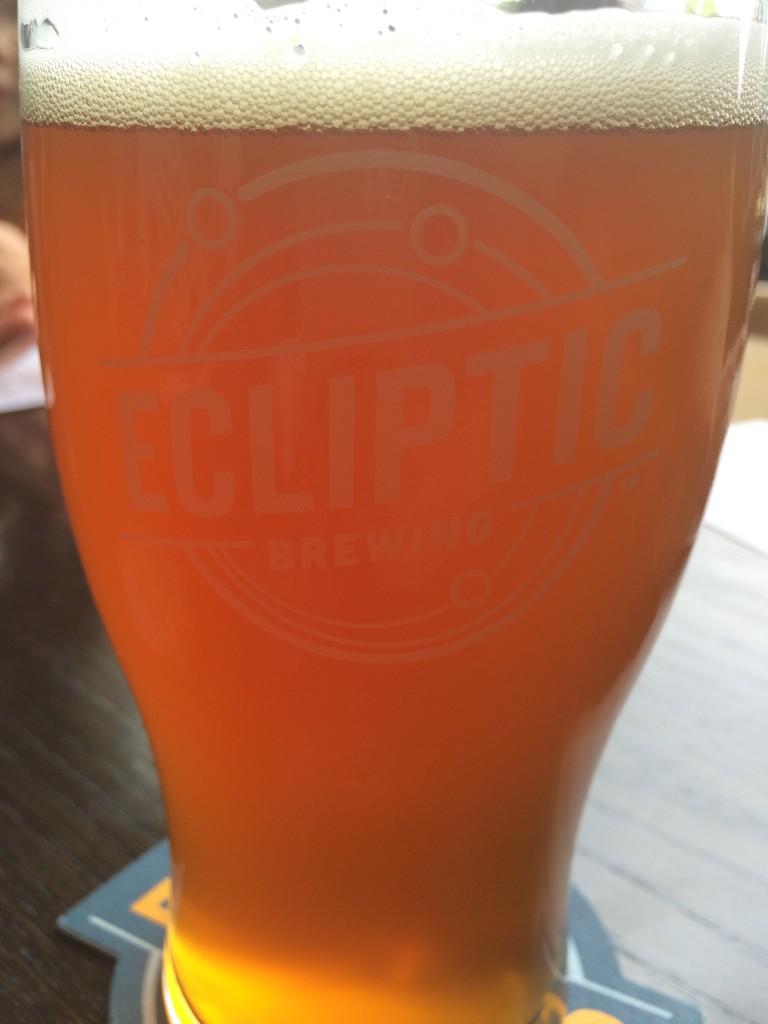 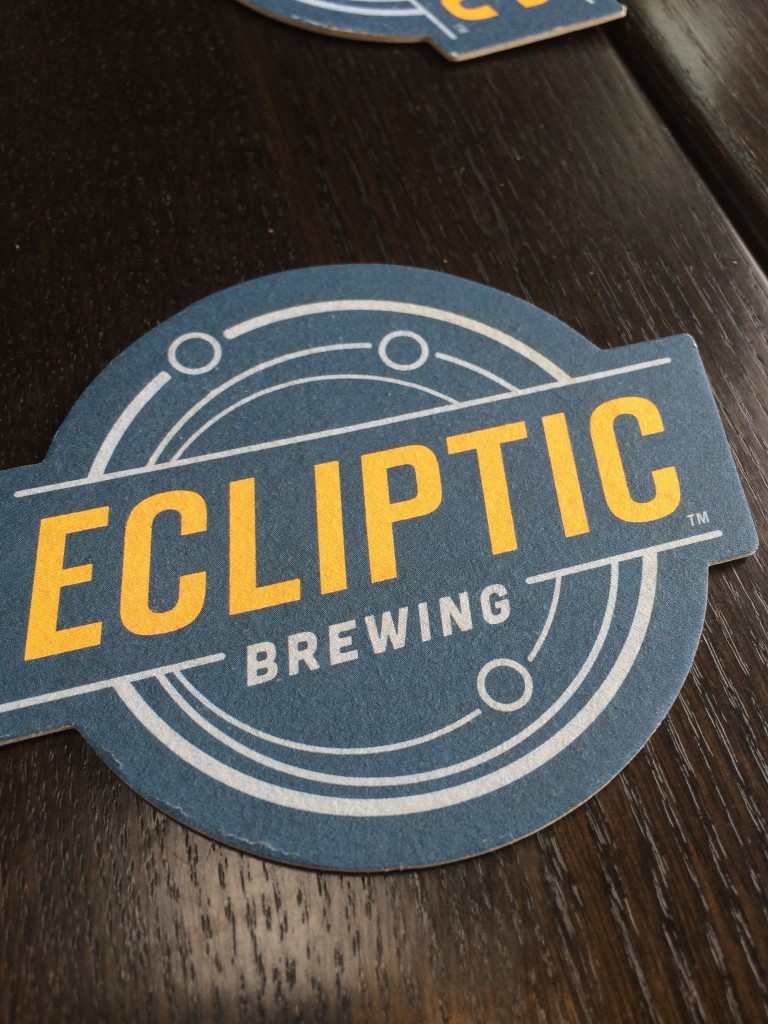 It was a cool, modern, high-ceiling and concrete floor and walls kind of a place with a ton of outdoor seating. Our friends ordered some food and drinks. The Orbiter IPA was a really smooth, balanced IPA. It SMELLED like a super strong, hoppy, intense bouquet of citrus and it smelled like it was going to be a face punch IPA, but once you took a drink it wasn’t like that. It was very mellow, which was kind of odd. Our friends shared their appetizer order of deviled eggs with us. They were topped with a sardine, which I didn’t eat. They assured me that it was the best part but…yeah, no thanks. I love deviled eggs, though! 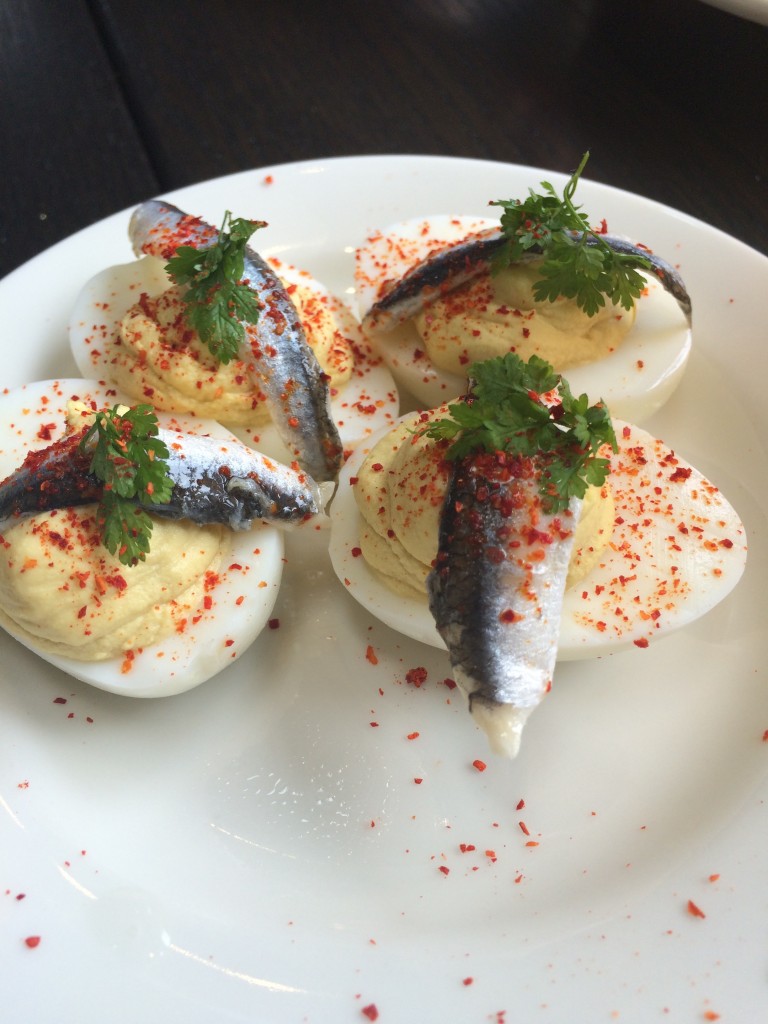 After hanging out drinking and talking at Ecliptic we realized it was pretty late in the day and walked back to the cars. Check out Charla’s super awesome cobalt blue shoe in this picture: 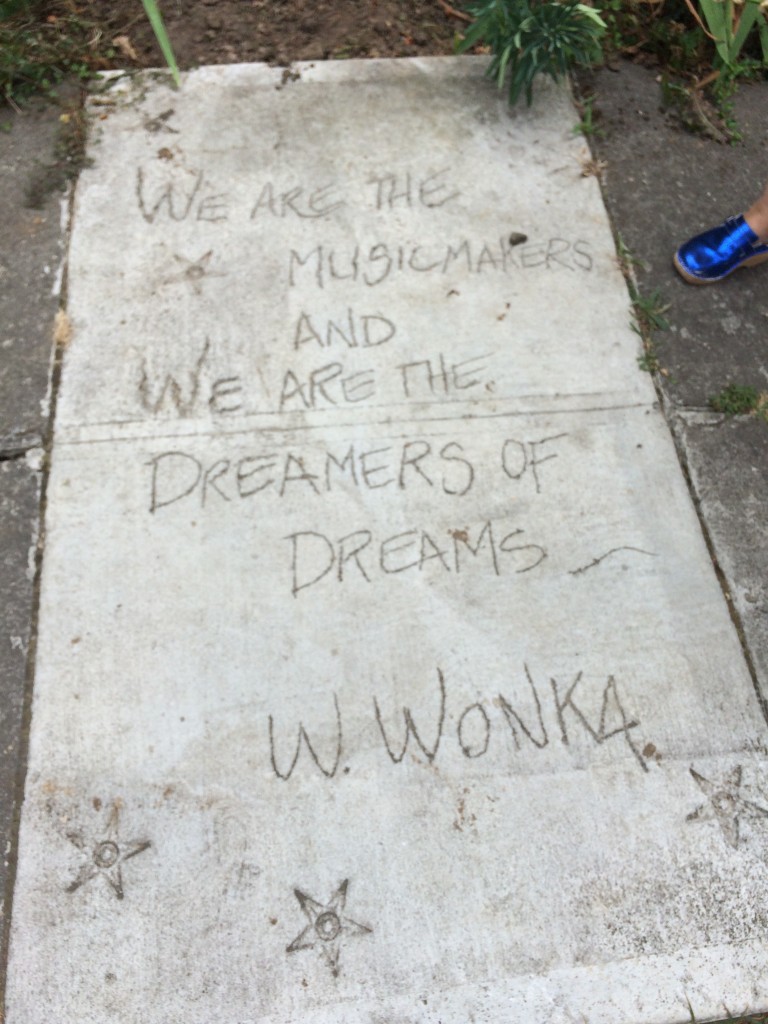 Somehow it seems fitting with the Willy Wonka quote and I don’t know why. 🙂 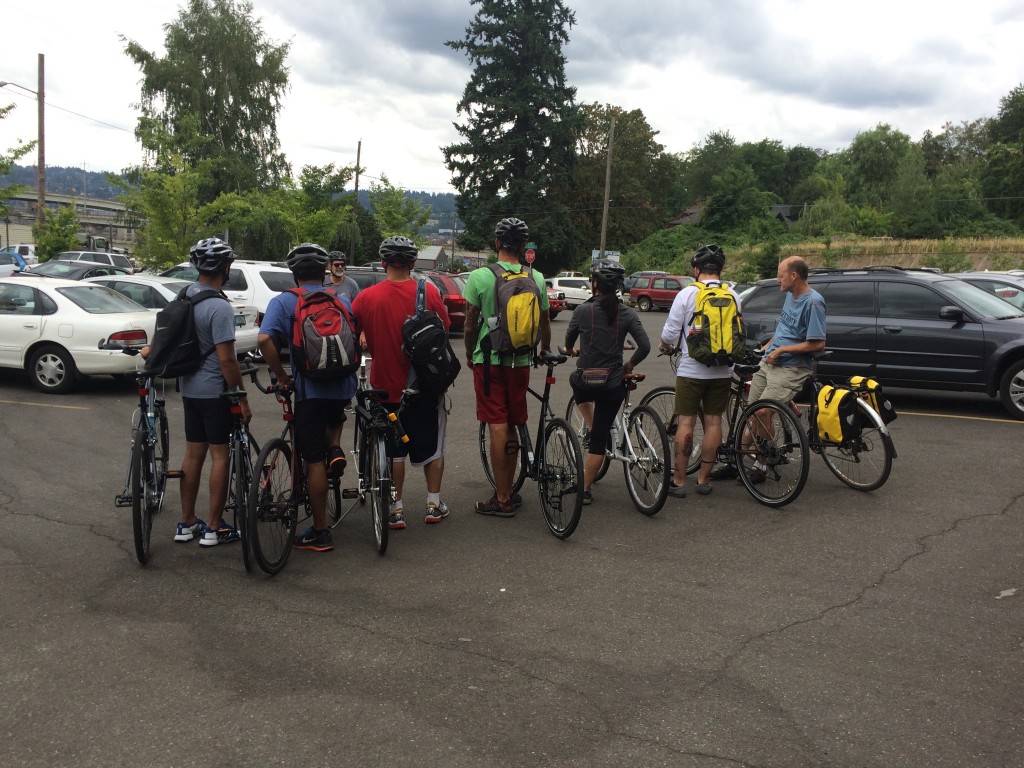 I hadn’t been since March when my back went out. One of the moves that hurt the WORST with my whole back issue was downward dog. As I continued with my healing and did physical therapy, downward dog was still something I couldn’t do at all. It was a benchmark for me. I periodically checked to see if I could do the stretch and for months and month, not at all.

I decided recently it was time to give it a try again. I tried downward dog at the gym one day as a stretch and didn’t have the immediate, searing pain in my low back so thought hmmm, maybe it’s better? I decided on Sunday I’d give it a go, with the caveat that if it hurt, I’d leave the class. I warmed up with the elliptical and then went to yoga class.

I spent the majority of the class subbing child’s pose for downward dog. I did to downward dog a few times in class, and it was just fine!! But I defaulted to child’s pose just to be safe. The rest of class went really well and I was able to do most of the stretches in class and I was SHOCKED to find that my balance hadn’t decreased after months off. I’m guessing that the combination between doing the One Leg Romanian Deadlift for my knees and all the core work I do with physical therapy for my back have maintained my balance (thank goodness!).

There were a few rotations in a lunge that felt not fabulous but overall it was a great class. 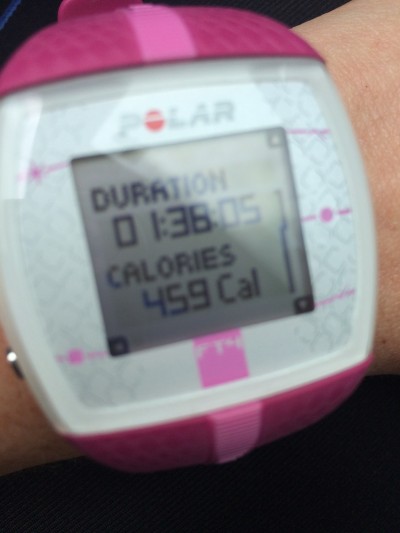 After class Michael and I went and saw Jurassic World! I was so looking forward to seeing it. I knew it wouldn’t be as good as the original, of course, but I had high hopes. Then…I started hearing from people it wasn’t great. I was disappointed and dragged my feet in seeing the movie but we finally had a free afternoon so I caved. 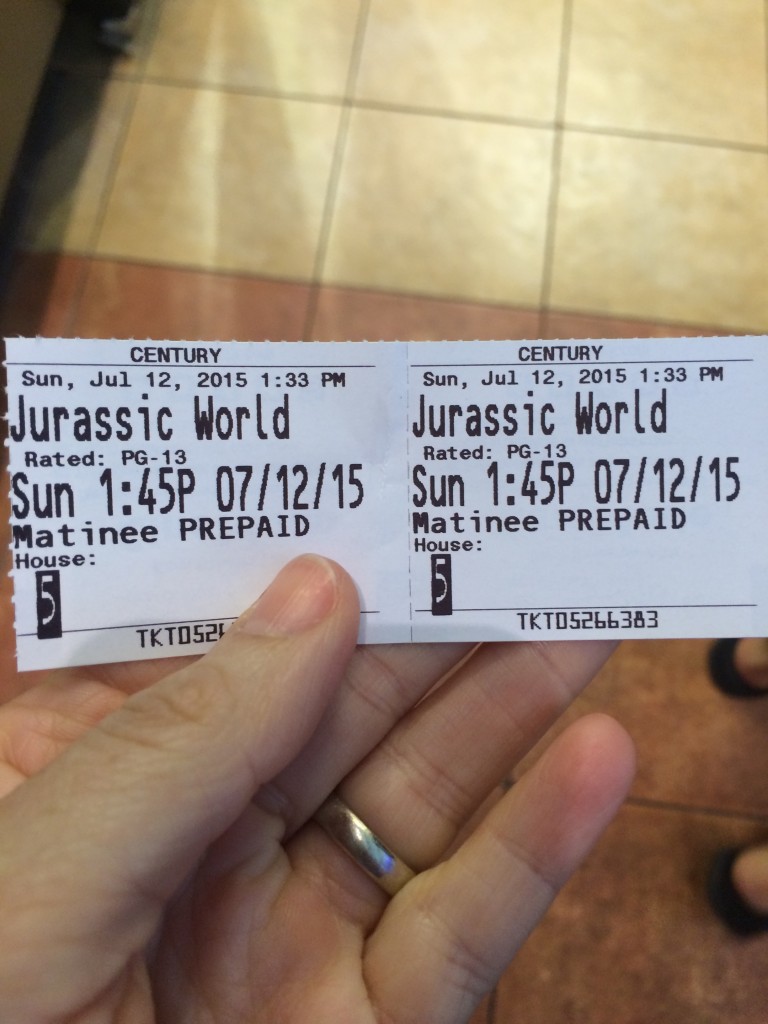 How was the movie? It was okay. It was fast-paced and had some exciting moments. There were definitely a lot of cheesy moments that made you groan but they’d switch gears pretty quickly so you didn’t have time to dwell on the cheesy for too long. Overall it was a decent action movie. Just don’t try to compare it to the original too much and you’ll enjoy it.

Sunday was going to be the first 40 mile bike ride of the season for me. Michael had done it many times in the last few months since he’s out of work right now. I’ve been relying on my commutes to work to get my mileage up. But it was time. Now or never. The event is a month away.

Looking at last year, our first 40 mile ride took us 4 hours (different route) and then our first attempt at this 40 mile loop took us 3:44. How would this year go?

We started the morning off with watching Tour de France and eating breakfast. 1.5 scrambled eggs, 1 turkey sausage link, black beans, unsweetened iced tea and strawberries. We were about to get going when Michael discovered he had a flat tire. At least it happened in the house and not 20 miles from the house.

Our start was delayed and we didn’t actually get on the bikes until after 11:30. And the temperatures were rising steadily. I slathered on the sunscreen and I also wore my new cycling jersey. I bought it for $30 (regularly $80!) and it fits great. For snacks I brought dried apricots and GUs (which I never ate), water and a water mixed with energy powder. 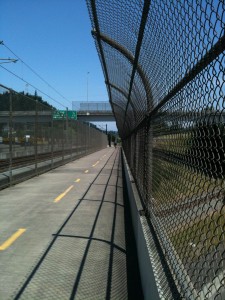 Michael and I set out on the I-205 bike path north which is essentially an uphill climb for about 15 miles. It really is uphill almost the entire time. Sometimes it’s a gradual grade, sometimes it’s a steep climb. I was actually feeling okay on the hills! I think riding to work has gotten me better at it.

There wasn’t really much to see or report on the 205 path. We connected with Marine Drive and were then biking the next few miles into a wall of wind. At least the wind felt nice on the hot, hot day. 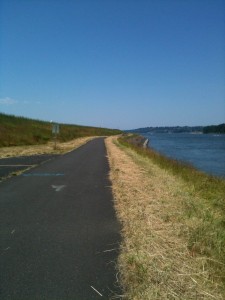 We rode along the water and then eventually stopped to help a guy out who had a flat. He borrowed my bike pump and then was on his way. 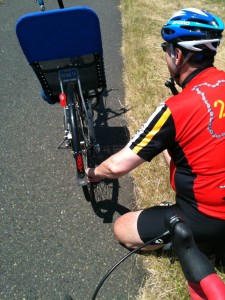 I got two compliments on my new cycling jersey–the first from the guy with the flat and the second from another cyclist who came up along side me and said “I love your jersey!” Too funny! I thought for sure I’d get compliments from women, not guys. 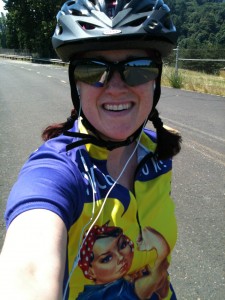 We left the trail and picked up the bike lanes through North Portland, taking Dekum to Vancouver. We stopped briefly at a convenience store, resting in the shade. Michael got himself a Pepsi and I got a Gatorade. I drank half and put the rest in my empty water bottle. I also had a snack of dried apricots before we pushed on. 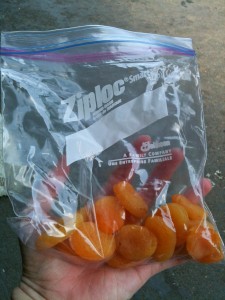 Dekum did not have bike lanes but there wasn’t much traffic there. Vancouver has super wide bike lanes and I love it! At this point of the day it was very, very hot, almost 90 degrees. I was starting to really feel the heat. The heat makes me feel slow on the bike and there wasn’t much of a breeze to cool me off. 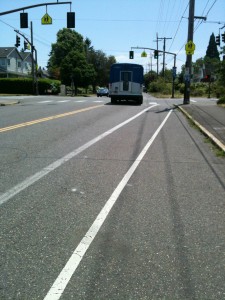 We rode by the Rose Garden and then picked up the Esplanade downtown. The rest of the ride was basically my commute home. The Springwater Trail was very crowded because it was so nice out. 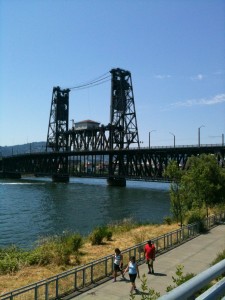 The first 25 miles felt fantastic! My body was good, I felt light on the bike, my legs felt strong, my back was comfortable–no complaints at all. The next 5 miles were slightly uncomfortable. My lower back was getting fatigued. The last 10 or so miles were brutal: I was tired, I was thirsty and what I brought was not helping and it was disappearing quickly, my neck hurt, my back hurt, my FEET hurt (next time wear thicker socks for padding) and I was just ready to be off the bike. 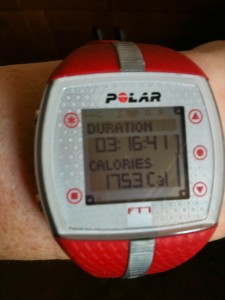 Michael and I shared a recovery protein drink and I happily showered the grit, sweat, sunscreen and bike grease off my body! We went to Little Big Burger in SE Portland to grab one of their small burgers as a lunch/dinner. I like that place because the burgers are the size of sliders and they are oh so good! We split an order of truffle fries. 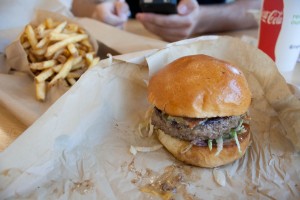 Even though I burned over 1700 calories, I oddly wasn’t that hungry. I blame the heat. It was a good first long ride but it did make me doubt whether or not I’ll be ready to do 100 miles in a month’s time….

In good news: the next day I felt completely normal. My recovery is awesome! That is really good news!

Finally, check out this great post by Suzanne on three success stories!

QUESTION: What’s a summer fitness goal you’re working towards accomplishing? How is it going?