Last week I had a date night with my honey at the Blazer game. They played the San Antonio Spurs–and won! It was an exciting game and it was nice to leave with a win (unlike the last game we went to). 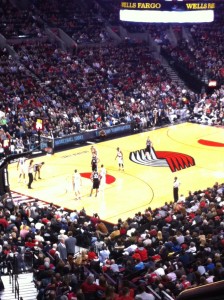 While we were there, I noticed that the woman sitting next to me ate your typical stadium foods. She started with a huge order of nachos (with all the fixings), then donut drops, then cotton candy. This is in no way a judgment, just an observation. I glanced over at her as she ate the huge package of cotton candy and I started to wonder. 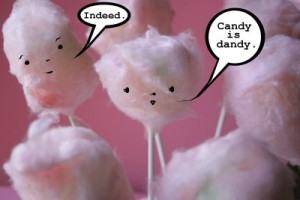 Is there any chance that cotton candy is as good as it was when we were kids? No way. There are a lot of things that I used to like as a kid that I’ve been terribly disappointed by as an adult. Somehow, I think cotton candy falls into that category. Either way, a walk down memory lane is not worth the staggering amount of sugar to me:

“It may look pretty with its light texture and pastel colors, but cotton candy is far from light in the sugar department. This carnival candy treat has an astounding 56 grams of sugar in a single 2.1 ounce serving. That’s 200 calories full of sugar, artificial flavoring, and artificial colorings. If you don’t destroy your pancreas in the struggle to produce enough insulin to tame all of that sugar – it’ll surely decay your teeth. This is one sweet treat to stay away from.”  (source)

Wow. 56 grams of sugar in a 2.1 ounce serving. How many servings are in a stadium package of the treat? I have no idea. I’m guessing it’s more than one serving, though.

What strikes me the most is that there is absolutely no nutritional value in cotton candy. It may be a stretch, but at least with ice cream there’s dairy in it, chocolate contains good things for your body, a Snickers bar has SOME protein in it….Like I said, a bit of a stretch, but all of those things are probably a better choice than cotton candy that has absolutely nothing in it but pure sugar.

What are your thoughts on cotton candy? Have you had it as an adult?

Before the Blazer game, Michael and I went to Toro Bravo for some snacks. Toro Bravo is one of the top five restaurants in Portland and we finally made it there! I’ve heard the wait to get a table is long and that’s always discouraged me from trying to go. We arrived there about a half hour after it opened, coming straight from work, and the place was packed but we lucked out with getting a table immediately. 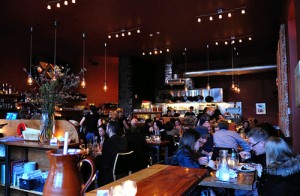 The vibe of the restaurant was very cool: trendy, hip, dimly lit, atmospheric music, pretty people everywhere. The kitchen was out in the open and from any table in the restaurant, you could watch them work. But there wasn’t any frenzy in it, just perfectly paired chefs creating masterpieces without breaking a sweat. And boy, did the food come out FAST!

I ordered the bread and oil ($1) and they refilled the bread at no charge. The first tapas dish came out within 10 minutes: the pork and apple filled empanada with a flaky, buttery crust and topped with a peach (I think) chutney. 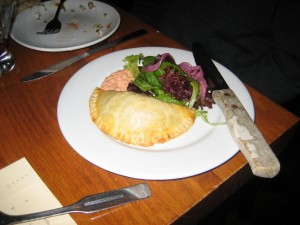 Next up: the jumbo shrimp in sweet and spicy chili oil. (I did not get a photo of that.) The show stopper: the dates wrapped in bacon with smokey honey drizzled on top. 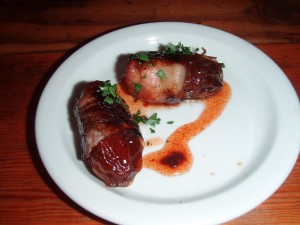 I’ve had the dates before, at their sister-restaurant Tasty n’ Sons. I liked the ones at Toro Bravo much better, though. Instead of maple syrup, it was honey and the bacon and honey were so smokey, that was all I tasted–but in a good way! They were so good. I wanted two more of those suckers.

I loved Toro Bravo and would definitely go back. The tapas were fantastic and the prices were reasonable. My only complaint: it was so loud you couldn’t really have a conversation, certainly not a romantic or intimate conversation.

It was a nice place to relax and snack before the game. After we finished our last bite, we headed down the street to the Blazer game.

Enjoy the rest of your day. 🙂

Sunday morning I forced myself to go to yoga again. Go me! Two Sundays in a row! I’m glad I forced myself to go. I’d been pain-free for almost 2 weeks and then my right knee started bothering me again. I don’t know why or what I did to aggravate it. The yoga class was a challenge, but I felt really good once it was done. My tight hips felt a little looser. There were a few moves that I’ve never done before and I think they’d be really good to incorporate into my workouts.

I wish I knew the names of these poses. The first one is this: lay flat on your back, arms on the floor. Then raise one leg and raise the other leg, touching the heel with the other foot’s big toe. It was a lot harder than it sounds and I really felt my core engaging while I did it. The other two poses that were new to me were these: 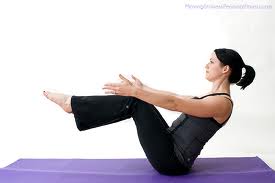 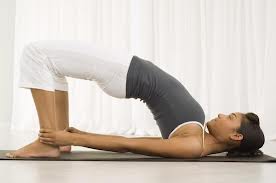 I spent 50 minutes doing yoga and then I hurried down to the pool to get in my swim. I think if I continue to do the yoga + swim routine on Sundays, I will reduce my swimming from 50 minutes to maybe 35. It’s just a long time to spend in the gym! Yoga and swim calories burned: 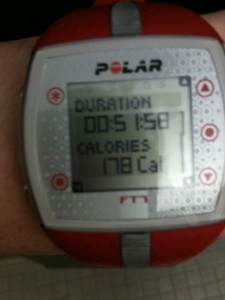 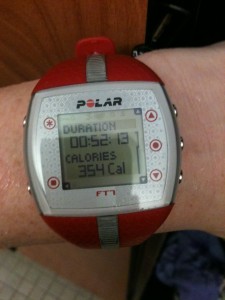 The rest of the day I felt much better and the knee pain reduced. My hips felt so much better too. See? I NEED yoga! I’m trying to convince myself it’s not a waste of time.

Sunday evening, Michael and I met some friends for dinner. It was pouring rain and dark, so much so it was hard to see the lines on the road.  It was such a nasty night, I kinda wanted to stay home with a hot cup of tea, a purring cat on my lap and a fire in the fireplace. But I’m glad we ventured out because it was a fun and delicious evening.

We went to SlowBurger–the new burger joint that is a spin-off of Slowbar. That name may seem familiar to some of you who joined me vicariously for my search for the best burger in Portland. I’ve had some pretty good ones. There was the messy but tasty Foster Burger (the secret is in the sauce!), there was the yuppie and garlicky Laurelhurst Market burger (everything should have aioli sauce on it, right?) and one of my favorites was the buttery hipster version of a burger at Toast. But none of these amazing burgers ever came close to the absurdly decadent SlowBar Burger.

The burgers at Slowburger did not disappoint. They were the same quality as the bar version of them. But let me get back to that in a moment. We met our friends and as soon as we got a table, the place filled up fast. It was almost standing-room only. There wasn’t much by way of atmosphere and Michael and I both commented that while the food and service was great, we’d probably just go back to the original SlowBar for the burgers simply for the atmosphere.

I ordered a pint of the Boneyard IPA because I was ecstatic to see they had it on tap! It’s a rarity that I ever see Boneyard IPA as an option on a menu and it’s my absolute favorite beer. 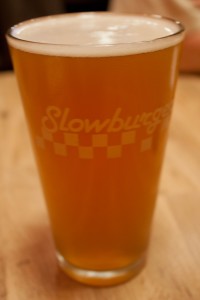 I love that beer. Damn. Anyways, the menu is simple, with only a few options to choose from but the best part was that we could order “mini” burgers of anything on the menu. Instead of a half pound of beer, it was 3 ounces in a slider. I ended up getting two sliders because I couldn’t decide which burger to get.

I got the black bean veggie burger slider that came with chipotle sauce and guacamole. It was delicious but messy as black bean burgers usually are. The real winner for me, though, was the other slider I got. It was a burger with chipotle cheddar cheese, caramelized onions, bacon, lettuce and their “special sauce.” That little burger was a flavorful punch to the face and I kinda wished I’d ordered a full sized version of it instead of the two minis! But, I did like trying two different kinds. 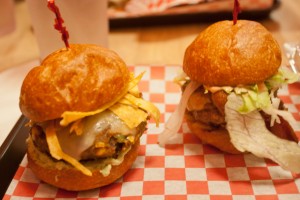 If you want to see some tantalizing food p0rn pictures–pictures of burgers that are much prettier than mine–check out this article. Michael and I also split an order of onion rings. They were large and sweet with lots of breading. I rarely get things like that, so it was a nice treat. I also got a side salad, which I loved. The dressing was like a zesty vinaigrette pesto sauce. 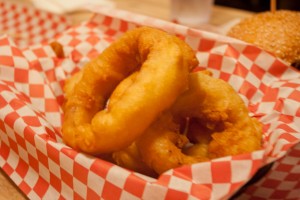 The dinner was fantastic and I was blissfully happy that I’d gotten the smaller versions AND I was able to enjoy my favorite pint of beer. It was fun catching up with friends that we hadn’t seen in nearly a year. That’s far too long.

Monday night Michael and I went to a Blazer game. It was my first game in years. While I dislike all sports on TV, I do enjoy going to games. I used to go to Blazer games and the hockey games here in Portland a lot in my 20’s. I don’t know why I stopped. 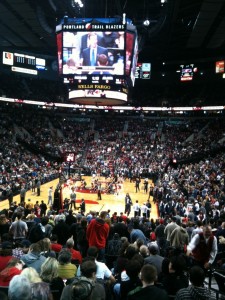 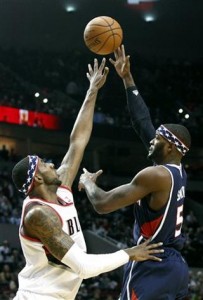 We had some great seats pretty close up. The game was exciting and the third and fourth quarters were nail-biters. At the very end it seemed like the Blazers would win but sadly…they lost. 🙁 They did a tribute to veterans for Veteran’s Day and someone from the Army sang the national anthem (and did a fantastic job). Michael bought another pair of tickets for a game in December. I’m really looking forward to it!

QUESTION: Are you a sports fan?