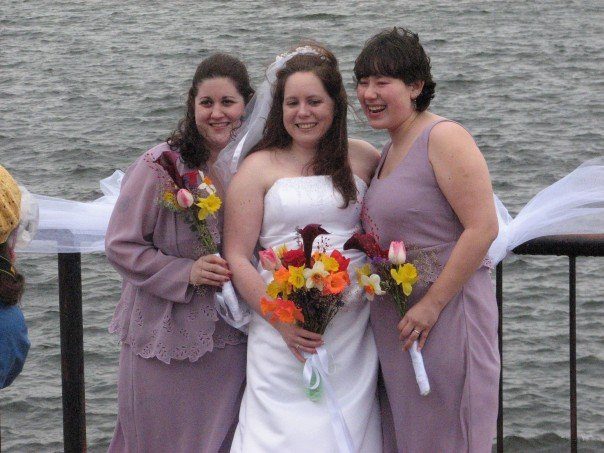 I’ve been a bridesmaid twice in my lifetime. The first time was for my best friend Rachel’s wedding. She got married at Gas Work’s park in Seattle in March (brrrr) 2007. 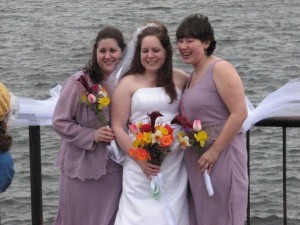 By Rachel’s wedding I had lost 35 pounds or so. Her wedding was small and low-key and totally cute! I wasn’t a very good Maid of Honor because I had NO idea what to do. I didn’t even know I was supposed to make a speech! I wish I had been better prepared. But we did do the obligatory Bachelorette Party in Portland  (complete with the drag show at Darcelle’s) and lots and lots of vodka.  So much fun!

The second time was for my brother’s wedding (I’m on the left by the bride). 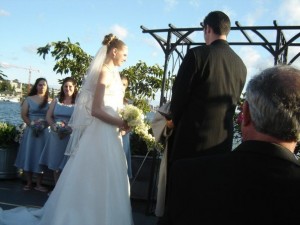 By this time, I had reached my first goal of losing 50 pounds! My goal was to lose the 50 by Andy’s wedding and I succeeded. I weighed in at goal the day of the wedding. My brother’s wedding was the complete opposite of Rachel’s low-key wedding. His was HUGE. But then, our family is huge so it’s hard to have a “small” wedding with our family. 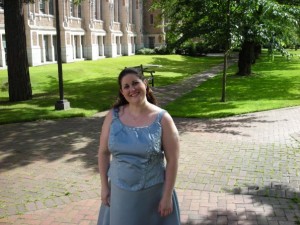 I had a break from weddings for a few years and no one I knew was getting married for awhile. My friend Erika got married last year but she decided not to have a bridal party at all and have a very intimate wedding. It was beautiful. 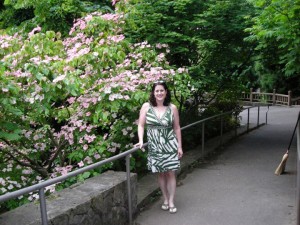 One of my cousins is getting married in Texas this October. Michael and I are going down to Austin for that and I’m looking forward to it! I love weddings. I always cry. I love the pomp and circumstance, the dresses, the flowers, the music! Everything!

Last night Michael and I went and saw “Bridesmaids”! This is a rarity for us because I think it would have to be a dying wish for Michael to EVER see a “Chick Flick.” In fact, in the three years we’ve been together I’ve gotten him to watch ONE: “Bridget Jones’s Diary” and that’s only because it was my birthday and I think I might have cried. (hehehe dirty pool) And he fell asleep half way through, so I’m not sure that even counts.

BUT he loves Kristen Wiig so he was willing to see Bridesmaids. 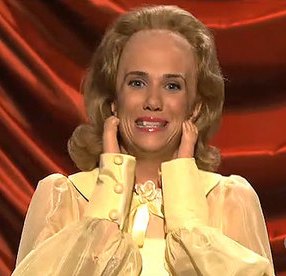 The movie was great! I laughed so hard at many parts of the movie I was almost crying. While it wasn’t necessarily the “Hangover” but for women, it was almost up there! I think it would appeal to men too because of the different kinds of humor. There was stuff for girls and gross humor for the boys that get dragged to the theatre.

Before we headed to the theatre, we made dinner: steamed veggies and steak. I added cottage cheese to mine. 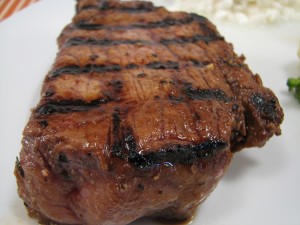 Michael is getting really good at grilling steaks! They looked perfect last night. I go through phases where I am in love with cottage cheese. I will eat it at every meal. Then I burn out on it and stop eating it for months. I’m currently in a “eat a ton of cottage cheese” cycle. 😉 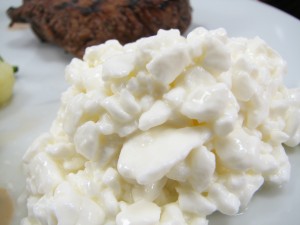 Michael is still on the Four Hour Body Diet and he was thinking about going off the diet in order to get buttery theatre popcorn! I convinced him not to so we snuck some snacks into the theatre: roasted, salted almonds flavored with jalapenos. Yum! They were totally addicting (and on the diet). 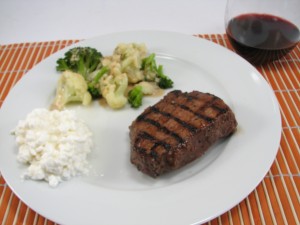 The movie was great (go see it!)  and we got home late and immediately crashed into bed.  It was a nice break of the normal routine!

QUESTION: Have you ever been a bridesmaid before? How was it?

Gimme Some of Your Tots