If there’s a salmon recipe out there, I will save it to try at some point. We eat so much fish that I’m always on the lookout for a recipe to find a different way to enjoy it with. Of the recipes I’ve tried, there have been a few salmon recipes that have become a staple. The old standby method is blackened salmon. It’s easy, it’s zippy and it goes well with Caesar salads.

Another favorite is the glazed salmon–just mix a little brown sugar into Dijon mustard and ta-da! Yummy sweet mustard salmon. The other favorite is the minced garlic, fresh basil and tomato method. All of these are easy, last-minute dinners that can be prepared in less than 30 minutes.

I stumbled upon this recipe in a memoir I was reading about an ex-pat living in Paris. I bookmarked the recipe because it sounded so good to me. I used to make something similar–with just a little butter, dill and slices of lemon–but I loved the addition of the yogurt sauce and cucumber. I knew the next time I was making salmon I’d try it this way. 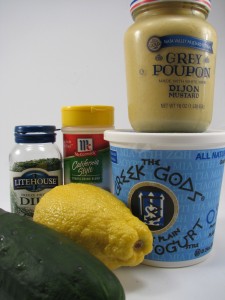 Thursday night I got home and for the first time in awhile did not have errands, chores or the gym after work. I decided it was going to be a lazy TV night. Since Michael was miserable on the couch with his hurt back (poor baby) I made dinner. First, a little mood music: 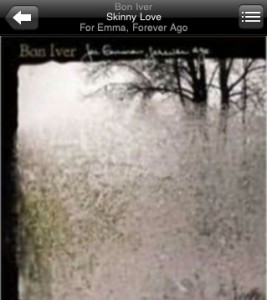 from “Lunch in Paris”

2. Fish: wash and dry salmon. On a large baking sheet lay out foil, place salmon on top and drizzle with oil. Season with salt, pepper and dill. Seal the foil. Cook 30-35 minutes in oven.  Serve on a bed of watercress. Squeeze half the lemon on the fish.

3. Sauce: combine all ingredients and leave to rest in the fridge. Pass with the salmon.

4. Salad: cut cucumbers into 1/2 inch slices. If you are using regular cucumbers, remove the seeds first. Can be cut hours before but don’t dress until ready to serve.

I knew this would be a good recipe from the moment I read it. And we almost always have salmon on hand. I prepared the salmon with a little bit of olive oil (which keeps the salmon from sticking to the foil), sea salt, pepper, a little bit of lemon pepper, dill and the lemon slices. 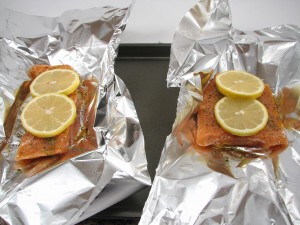 I wrapped the foil loosely and put it in the oven. Doing the salmon in the foil like this makes clean up super easy. While it was baking (I changed one thing–375 degrees instead of 400) I made us simple salads to eat while it cooked. 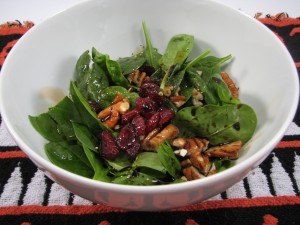 Spinach salad with half a serving of Craisins, chopped walnuts, balsamic and olive oil. I love this salad. 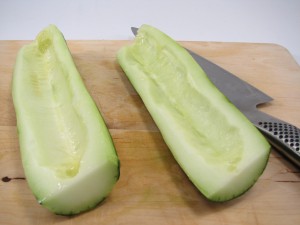 Next I worked on the cucumber salad. I scooped out the seeds and then chopped the cucumber. I made the yogurt sauce using the recipe as just a guide. I added more dill and a little bit of freshly squeezed lemon juice. The flavors were mild and delicious. 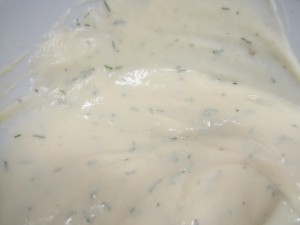 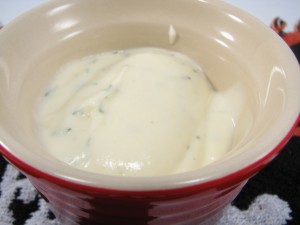 I changed the recipe a tiny bit again. I mixed the cucumber chunks with some yogurt sauce to lightly coat them–sort of like a thick dressing. 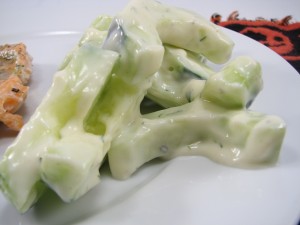 The salmon was done and perfectly cooked–not overdone at all. I squeezed some fresh lemon juice on the baked salmon. 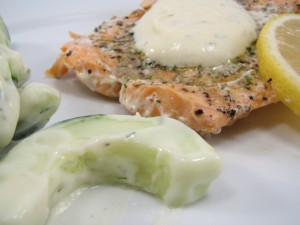 Then I topped the salmon with a spoonful of the remaining yogurt sauce. I did not have watercress so I skipped that. I sprinkled a little extra dill on the cucumbers and dinner was served! 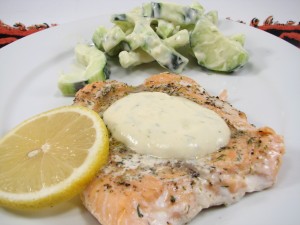 What I loved most about this recipe was the mingling of different flavors. The fresh lemon, plain Greek yogurt and dill are a delicious combination. It’s mild but every once in awhile the lemon had a little kick. 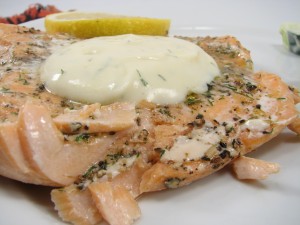 Another bonus–Greek yogurt is a great alternative to other things like mayo, sour cream or tartar sauce. The plain Greek yogurt I used was about 60 calories a serving. It added a different kind of flavor to the fish and I loved it! Michael liked it too. He said the dinner was great and he loved the cucumber and sauce. This will make another appearance in our meal rotation for sure.

I’d give this recipe an A-. It’s delicious, EASY and low in calories. The only “downside” is that it’s not that innovative or that different than the lemon pepper salmon I already do. I do love the yogurt sauce though!

We settled in to catch up on old TV shows–we are weeks behind on the new seasons! (We watched a few episodes of Parenthood, The Office and Modern Family.) I snuggled with the sweetest kitty ever: 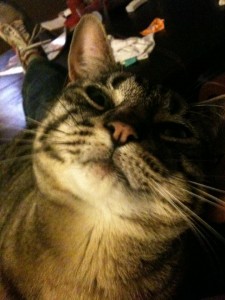 And look who else made an appearance! 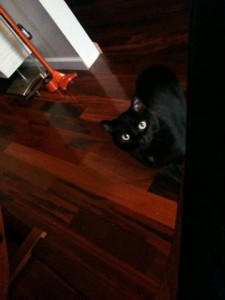 Maya! She even sniffed my hand before running away again. She stood in the hallway behind my chair and cried. I think she wants to join us for our cuddle sessions when we watch TV but she’s just too skittish. Poor thing.

QUESTION: What’s your favorite recipe that includes Greek yogurt? Will you try this recipe?

4 thoughts on “Wild Salmon with Dill and Cucumber Salad”