Gimme Some of Your Tots 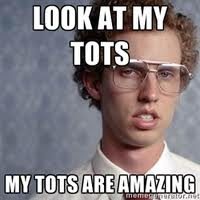 I had President’s Day off, so I enjoyed a three day weekend of sleeping in! That was pretty much the best part. I woke up between 9-9:30 a.m. most mornings and then laid in bed with Fat Kitty glued to my side deciding whether or not to get up and workout. I did. Saturday I went to the gym, Sunday I swam and Monday I hit the gym again. I was sore from Saturday’s lunges so I went easy on myself Monday. I did the elliptical but backed off the resistance (9 or 10 instead of the usual 11 or 12) and then did upper body weights only.

After my workout on Monday, Michael and went to lunch at the Nob Hill Bar and Grill over on NW 23rd. NW 23rd is a very trendy area–“Nob Hill” or “Snob Hill,” whichever you want to call it. There’s upscale boutiques, restaurants and consignment shops on 23rd. It’s a good place to window shop.

It was a gloomy, misty day in Portland. Michael had a Groupon deal for the bar–2 burgers and 2 drinks for like $10! It was a screamin’ deal. We both ordered the cheeseburger with bacon. My burger came with tots. It’s been ages since I had tater tots! It made me think of one of the greatest comedies ever….

I ordered an iced tea with my burger and Michael got a beer he called “the worst beer he’s ever had” and said it tasted like embalming fluid. It looked like a PBR (almost clear :P). Gross. I was glad I skipped it. We chatted about the plans for the rest of the day. We had IKEA on the brain!

I have no idea what happened with that picture of me. I think I was laughing mid-photo. Doh! At least my date looks cute. 🙂 Our burgers arrived and they looked epic. And I totally could not wait to have some of my tots!

How was the burger? It was good, it was just what I’d been craving: a messy, sloppy, juicy burger with “secret sauce” and so much lettuce it was falling out with each bite!

It wasn’t the best burger I’ve ever had like some of the Best Burger Contenders here in Portland, but it was definitely a step up from any fast food burger. For a dive bar, that burger was pretty awesome! And the tots? Even better! They must have been fried in something delicious because there was a hint of something else–Michael thought fish and chips. Who knows? But they were good tots.

I ate about half of my tots and I was so stuffed I couldn’t continue. We finished up our lunch and then headed back out into the misty afternoon. NW 23rd is always crowded with people. There’s some cute art on the streets too.

After walking around NW 23rd, we headed back to the car and went to IKEA–where we spent the rest of the afternoon.

We got two new vanities for both bathroom remodels, and a new lightbox for me. It’s actually a kitchen cabinet (white) that we’re turning into a lightbox. Michael and I spent the rest of the evening working on assembly.

Maya Update: On Sunday I decided that we’d try and feed her the wet food BEFORE the medicine administering. I wondered if the medicine was making her not want to eat. I was right. Feeding her before giving her medicine made a huge difference. She slurped down the food like she was starving, then I’d grab her and Michael gave her the medicine. We’re done giving her pain meds, now it’s just antibiotics. She seems to be doing really well. We have a follow-up appointment on Thursday for the vet to check her gums and make sure they are healing and to give her the rest of her vaccines.

QUESTION: Did you have a three-day weekend? What was the highlight of your weekend?

You’re a Mean One, Mr. Grinch!