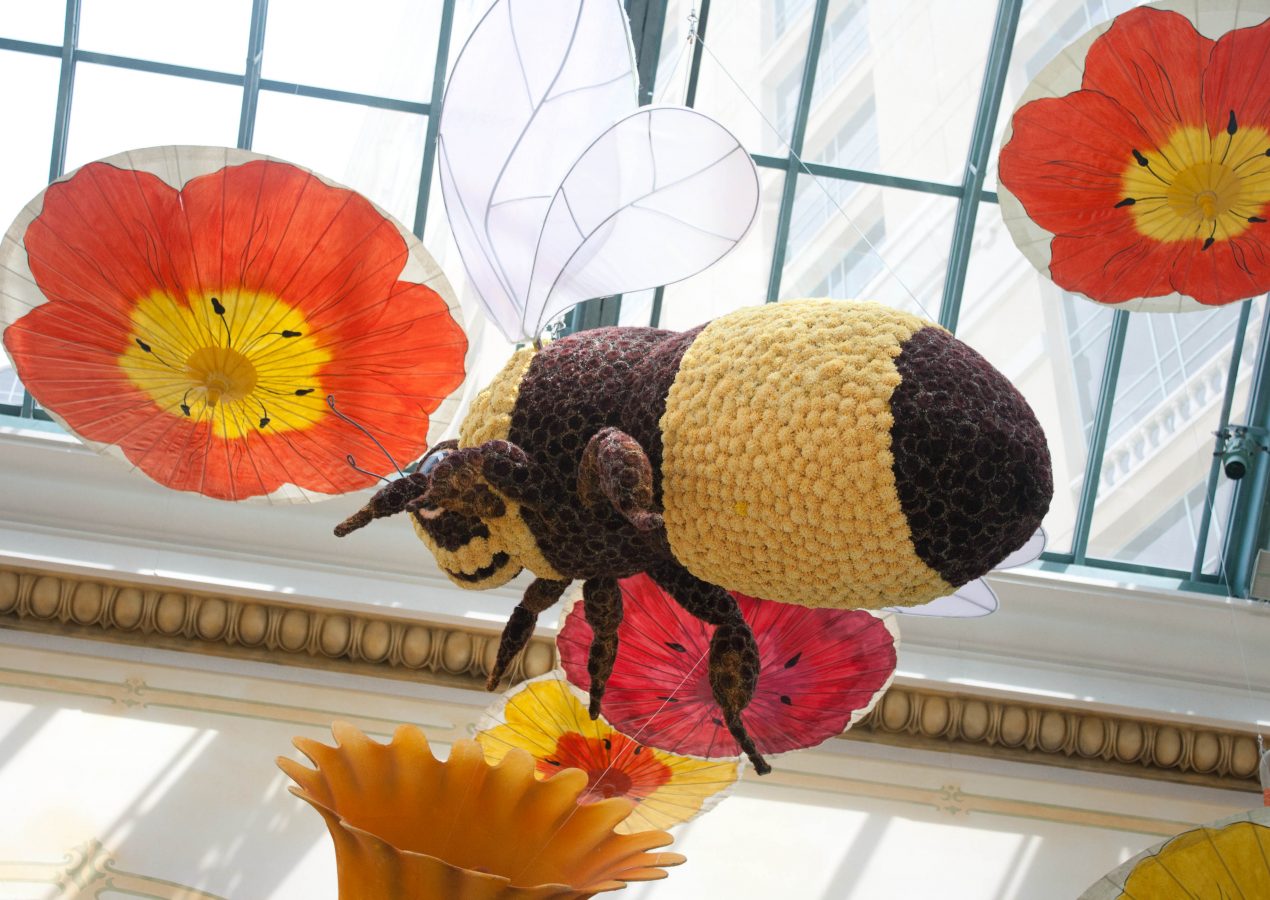 On Saturday morning I woke up at an ungodly hour for Las Vegas–like 8 a.m. But I was rested and excited to start my day. Michael, the poor boy having crawled into bed at 4 a.m., was still asleep so I snuck out and went to the gym in the Monte Carlo. The gym was small and crowded when I got there. My plan was to run on the treadmill or use the elliptical but they were all full so I hopped on the exercise bike instead. It was that new fancy Tour de France spin bike and it was super nice.

I got in a fantastic bike workout in about an hour and then headed back to the room to get cleaned up.

Michael was becoming one of the living around that time and we showered and went downstairs to the Cafe in the Monte Carlo. I’d eaten there once before with my friend Robyn but we split a huge piece of chocolate cake, so I had no idea if the meals were actually decent. 😉 I ordered a boring breakfast–two fried eggs with bacon, sourdough toast and hashbrowns (I ate a few bites only of those) and lots and lots of coffee.

The food turned out to be really good at the Cafe. After breakfast we played tourist. This is the fourth vacation to Vegas so I’ve seen most of the touristy things but that doesn’t mean I don’t enjoy doing them every time! Vegas is seriously what you make it. You can have a blast–AND save money–or you can live decadently and indulge. Either way, you can have fun.

So tourists! We walked around the Strip for most of the day. It was pretty overcast but muggy and warm. Neither Michael nor I had ever been to Aria or City Center (they were still building it last time) so that was first on the list. It looked like a really nice place but nothing really stood out as amazing to either of us. But, if you want, you can buy a humongous dragon made entirely out of chocolate.

Next, Michael wanted to check out the poker room at Caesar’s Palace and then I wanted to see the Bellagio atriums because there are always cool flowers and art there.

Finally, it was lunch time. We’d ended up at the MGM so we got sandwiches at Tom Collichio’s ‘Wichcraft restaurant. I ordered the gruyere and caramelized onion panini on rye bread and it was delicious. The rye bread was a bit overpowering; I felt like a sourdough bread would have been better, but I was famished and starting to feel cranky from low blood sugar and fatigue.

Michael says this picture says “Lisa’s cranky, feed her.” And I concur.

After lunch we split up and Michael played poker while I did some shopping and gambling on my own. He had a surprise for me for that evening, but I didn’t know what it was yet. After a few hours, we met up at the hotel room to get changed for dinner and the surprise!

For dinner we went to Wolfgang Puck’s at the MGM. We split an order of the cheeseburger and it was to die for–one of the best burgers I’ve ever had–far surpassing anything that I thought was great in Portland. It had a caramelized onion JAM on it and avocado. Every messy bite was totally worth every single calorie I ate. LOVED it.

We also split the mac n’ cheese, which was just ok (not as good as Martha’s) and the Brussels sprouts.

We ordered too much food. Period. There was no way we could have eaten all of that, which was a shame because it was all delicious. The Brussels sprouts were cooked in oil, garlic and I think the juice of a lemon or orange. I definitely saw orange zest on them.

I had a hard time stopping eating, they were so good. After dinner we went to The Mirage to see the Beatles Love show! That was Michael’s surprise and it was a fantastic one! I’ve never seen a Cirque show in Vegas and that was the one I really wanted to see. We had some time to kill before the show started so I played some roulette (and quadrupled my money).

The show was absolutely amazing. I can’t believe how much I am gushing over my weekend in Vegas, but truly it was one great time after another. We were seated in the 5th row of the theatre and every single moment of Love was mesmerizing and exciting. The music was great and there were too many moments to count that I had tears in my eyes. What an amazing, wonderful, spellbinding evening.

Needless to say, we both collapsed into bed as soon as we got back to the Monte Carlo and I wasn’t conscious until 10 a.m. the next day!

QUESTION: Have you seen any Cirque shows? What was your favorite?

…And Then I Fainted