Run. Do not walk. RUN to your local movie theatre and see “The Cabin in the Woods.” 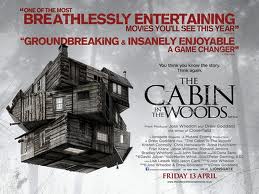 Over the weekend, Michael and I had a date night at the movies. We went to the Laurelhurst Theatre here in Portland. It’s an old movie theatre with food options. You can get your typical popcorn movie theatre experience, but they also have pizza, salads, wraps and beer. It was our first time going to the Laurelhurst and we’ll definitely go back. The theatre has small tables throughout where you can eat your meal. We got there late so we didn’t get a good seat with a table so we skipped the pizza and salads (which I kinda wanted) and shared a small popcorn and we each had a beer. Going to the movies with a beer is awesome.

I had no idea what Cabin in the Woods was about other than my brother recommended it and it was a horror movie. I was so pleasantly surprised and shocked at what the movie was. I kind of liked going into it with no idea what to expect. Most movies are pretty predictable these days. The movie was AWESOME. I won’t give out any spoilers, but trust me that you should see this movie! What a pleasure!

Since we skipped the pizza at the theatre, we were on the hunt for dinner afterward. Unfortunately, it was prime time on a Saturday night and everywhere had a line. We tried a pizza place near the Laurelhurst and there was over an hour wait. No thanks. We ended up at Dove Vivi. It was a little hole-in-the-wall nestled between a Plaid Pantry and a laundromat. It was hard to find but once we did we saw the line of people! This place was popular! 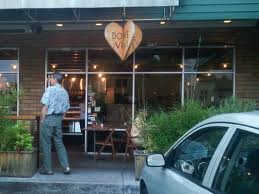 First off, the staff was wonderful. That alone says a lot about a restaurant. They were all pleasant and nice and the service was fantastic. That goes a long way for me. We didn’t have to wait too long for a table even though the restaurant was completely packed. A table opened up outside and we gladly took it. 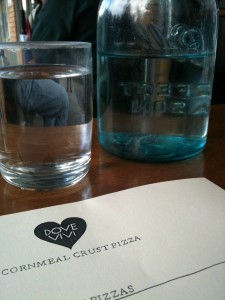 They had a decent drink menu but I stuck to the Ninkasi Total Domination beer because that’s what I had in the movie. It was hoppy and bitter, just like I like my IPA’s. Since I had been “detoxing” since our Texas vacation, I’d been refraining from drinking alcohol for nearly two weeks. I just didn’t want those extra calories. Our date night beers were the first I’d had in awhile and wamboozled me a bit. 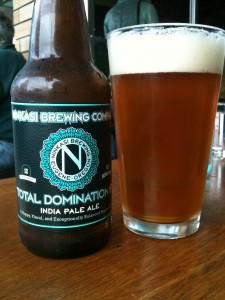 We poured over the menu and I was intrigued by many of the pizza options. What to order? What to order? Michael and I finally agreed to do a half and half. Settled! 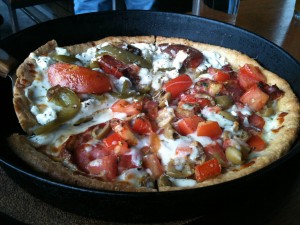 The first half was the night’s special: The “Coppa” which was mozzarella and provolone cheese with Italian cured ham, sliced green olives, and fresh tomatoes chopped up. It was salty and savory. 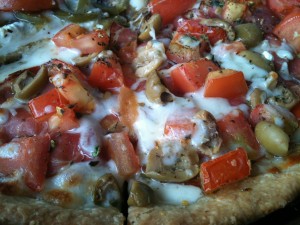 The other half was what I wanted: the “Goat Cheese” pizza. It was pizza with gooey mozzarella and creamy goat cheese with rosemary, tomatoes and green peppers. I LOVED my half of the pizza! The goat cheese was so creamy and flavorful. The huge chunks of tomatoes must have been roasted or marinated in something because they tasted outstanding as well. 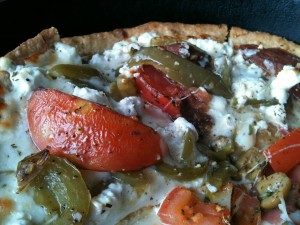 Apparently this place is a deep dish pizza place only. The crust is made out of cornmeal and it’s thick and crunchy, like a crispy cornbread muffin. It was seriously fantastic. I don’t know that I’ve had cornbread pizza crust before. I want to find a recipe to try it at home! 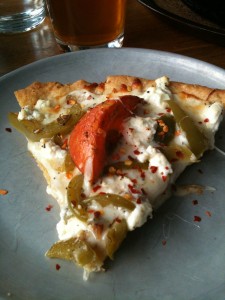 The pizza came out in a cast iron skillet. It was a neat presentation. The one thing that was a tad disappointing was the size of the pizza. It was pretty tiny for the amount we paid for it. There were three slices of both types, so only 6 pieces totals. I guess it’s “artisan” so that means smaller. Kind of a bummer, but the pizza was still really, really good. I ate one piece of my goat cheese pizza and one piece of Michael’s Coppa and I called it good. Yes, I wanted my last piece of goat cheese pizza but I restrained myself (yay leftovers).

QUESTION: Have you ever had cornmeal crust pizza and what recipe did you use? Did you like “Cabin in the Woods?”