For the holiday weekend (and my birthday) we went to Bend! We haven’t been in winter time in a few years. I think maybe 2 years ago for my birthday? We rented a house with friends who had never been snowshoeing before and we arrived and there was…no snow…?

Well this year we booked the same house we stayed in last May with my parents (see that post for photos of the house!). Man, looking back at those posts from last year…Logan is so tiny! He looks like a little baby still. Awww heart melting…he’s such a big boy now!

Our friends that came with us this time have a 5 year old daughter, so it was nice to have another kid for Logan to play with. Logan LOVED it! He was following her around and copying everything she did. It was totally adorable. 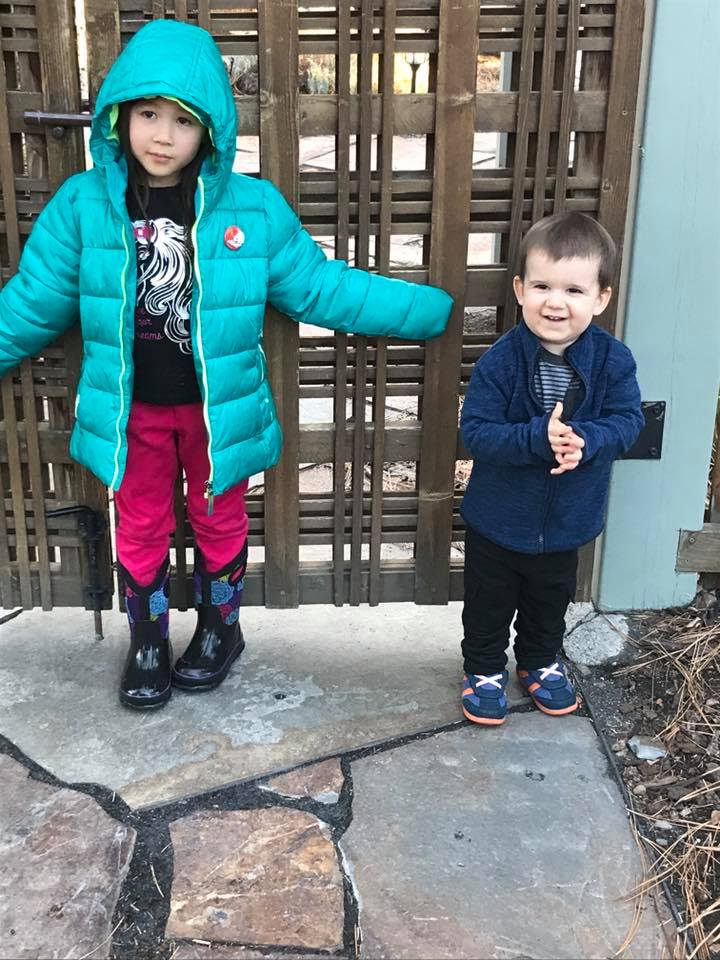 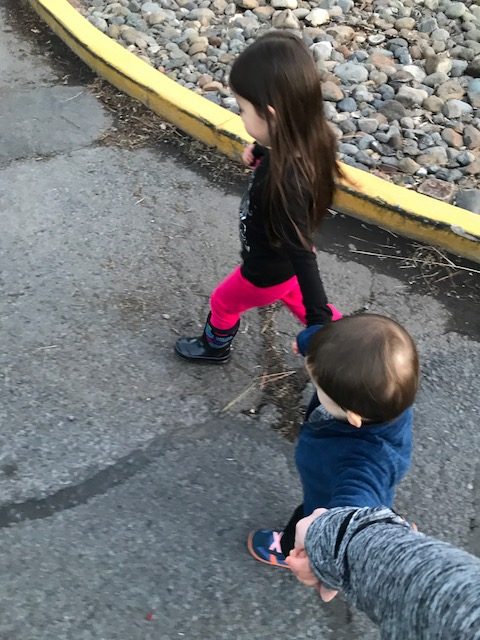 We also discovered that the park across the street from the house we rented was PERFECT for little kids! Logan had such a blast. We went to the park a few times.

So we caravan-ed to Bend and stopped in Madras for a quick lunch (Mexican food) and then checked into our house. Saturday was WARM! We totally did not need jackets when we walked to the park for the kids to blow off some steam. Sitting in the car for 3 hours is hard. Logan did great and slept for a good portion of it, but he was happy to be out of the car and playing on the swings and slides and kid toys.

It was about 62 degrees! It was crazy! Like I said, no jackets needed. I was beginning to be a tad worried about our plans to snowshoe………. 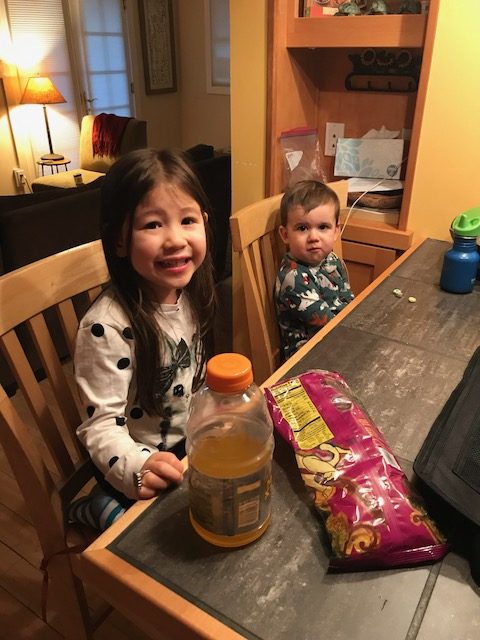 So for dinner Saturday night, our friends made a delicious pasta dish (Michael and Ben had walked down to Growler Phil’s to fill the growlers, pick up some breakfast sausage at the meat department, and go to the grocery store for some essentials) and we munched on bread and cheese and drank beer. It was all so tasty! What a fun night. Lots of good food. The kids went to bed pretty easily. And then we all got in the hot tub with some champagne! 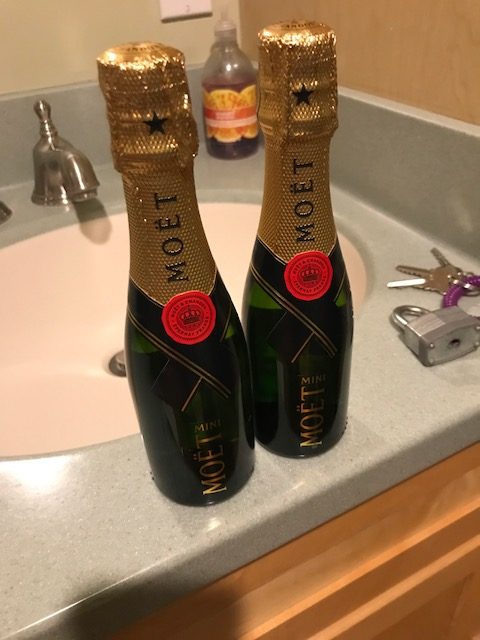 Just in case you were wondering…a hot tub and champagne sound like an AMAZING idea, and it was at the time, but dang did it give me a headache! I guess the combo on the champagne and the heat. The hot tub felt so good though! I was still a little under the weather, so it was nice to just relax. We chilled in the hot tub (it was probably about 25 degrees overnights outside in Bend) and then I went to bed a little early because I knew the munchkin would be up at dawn. (And I was right.)

Sunday morning I got up with Logan and made coffee and had some breakfast. Then everyone else got up and we took the kids up to Mount Bachelor. It was a gorgeous, sunny, warm day. And there was no snow.

I am beginning to think we are cursed! Both times we have taken friends to Bend in January to snowshoe (for their first times!!!) there was NO SNOW. We are seriously cursed. UGH.

So we couldn’t find any snow to snowshoe. Michael’s back was bothering him so he stayed back at the house with the dogs and the rest of us set out to find somewhere the kids could at least sled. Wanoga Sno Park had enough snow that we could sled, so all was not lost! 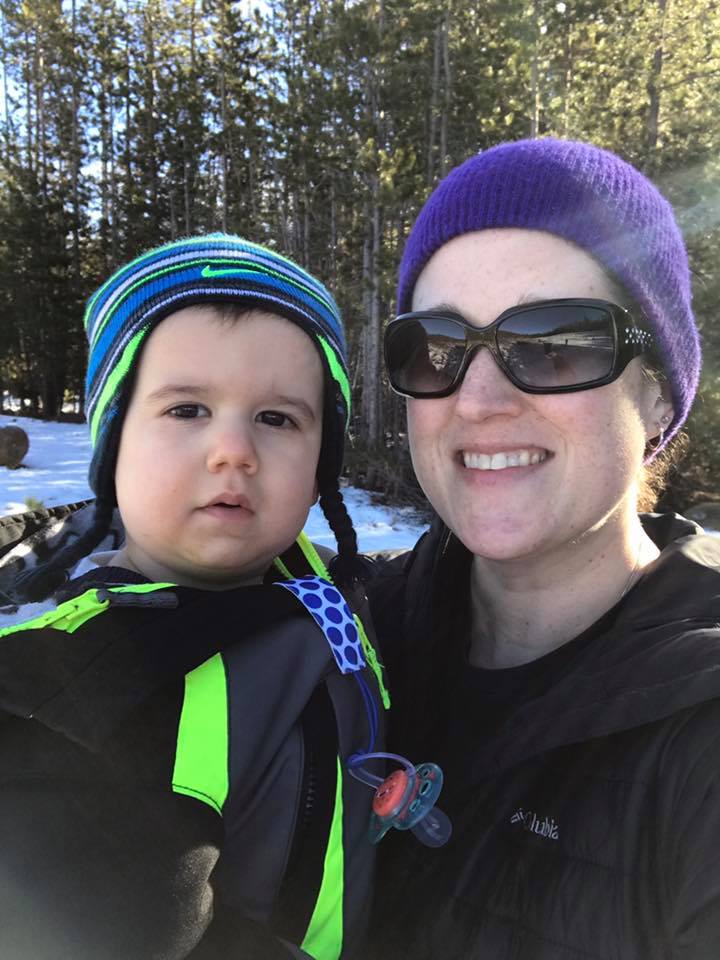 I bundled Logan up pretty good, even though it wasn’t that cold and everybody went sledding. Logan LOVED watching everybody sled. I found a teeny tiny hill and took Logan sledding with me about half a dozen times. He LOVED it and said “WEEEEEEEE” and he laughed. But when I tried to put him in the sled by himself and pull him on the snow he did NOT like that at all. 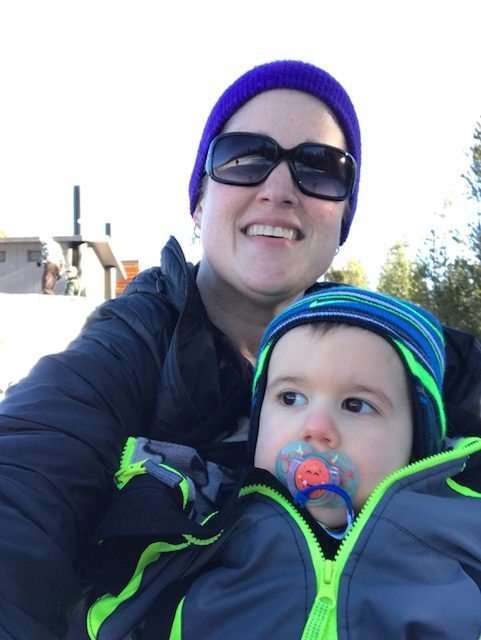 After sledding for a bit we went back to the Virginia Meissner Sno Park to go for a “hike”. It was such a beautiful day out with the sun and we had some time and wanted to be outside with the kids, so we all “hiked.” Below are pictures of our trek on the snow. If you want to see pictures of what it would look like WITH SNOW, check out this post and this post. Dammit! I can’t believe there was no snow again!! 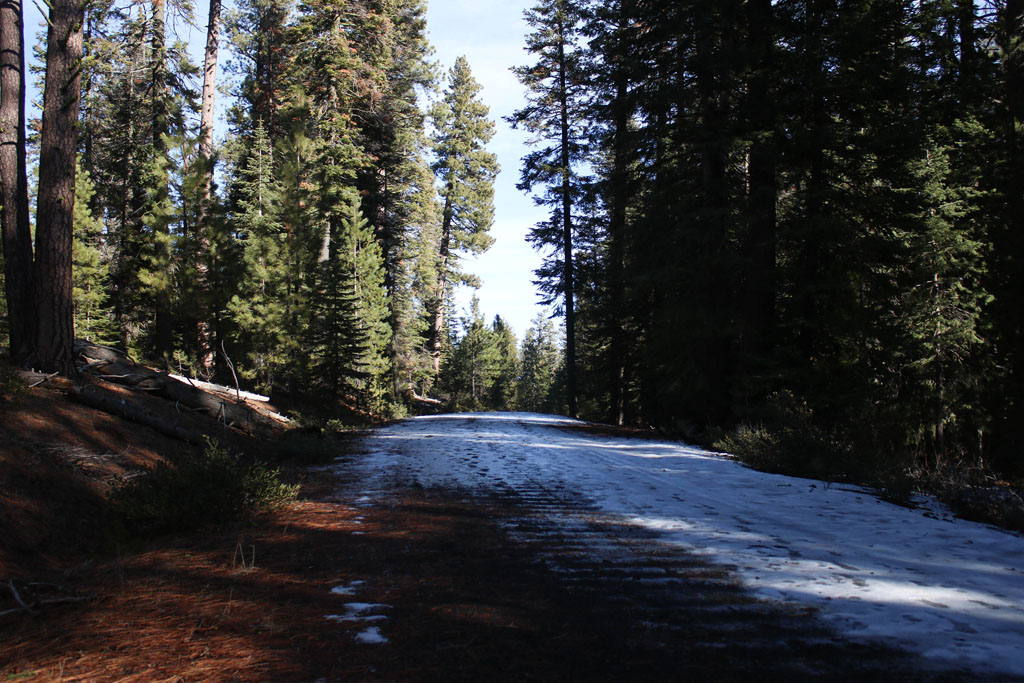 For the first time ever, I tried hiking with Logan in the Kelty backpack with me carrying him. Michael usually does it. I’ve wanted to try it before and we’ve made plans for me to try carrying Logan to try and build up the strength to do it for longer, but we just never got around to it. So this was trial by fire! First, Logan is 30 pounds (and he’s not 2 yet) and the pack is probably 10. So an extra 40 pounds on me was hard and weird. It was doable, but my shoulders are what hurt me, honestly. It was really really hard on the shoulders. Maybe I needed to adjust it? I don’t know. I carried him for about 1/2 a mile up the snowy/icy, empty trail, then took him off to give my shoulders a break. Logan walked for some of it. Then I just carried him. 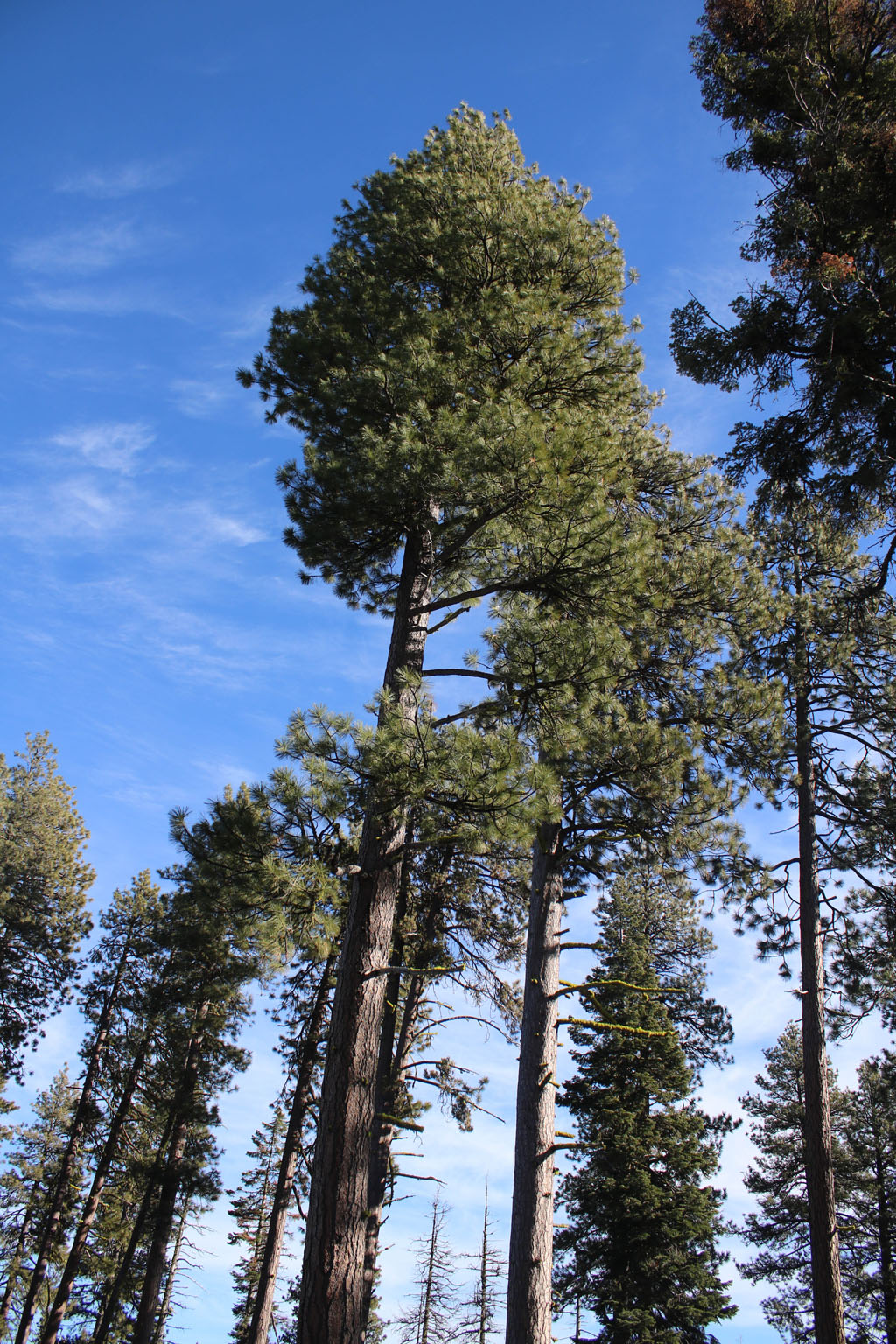 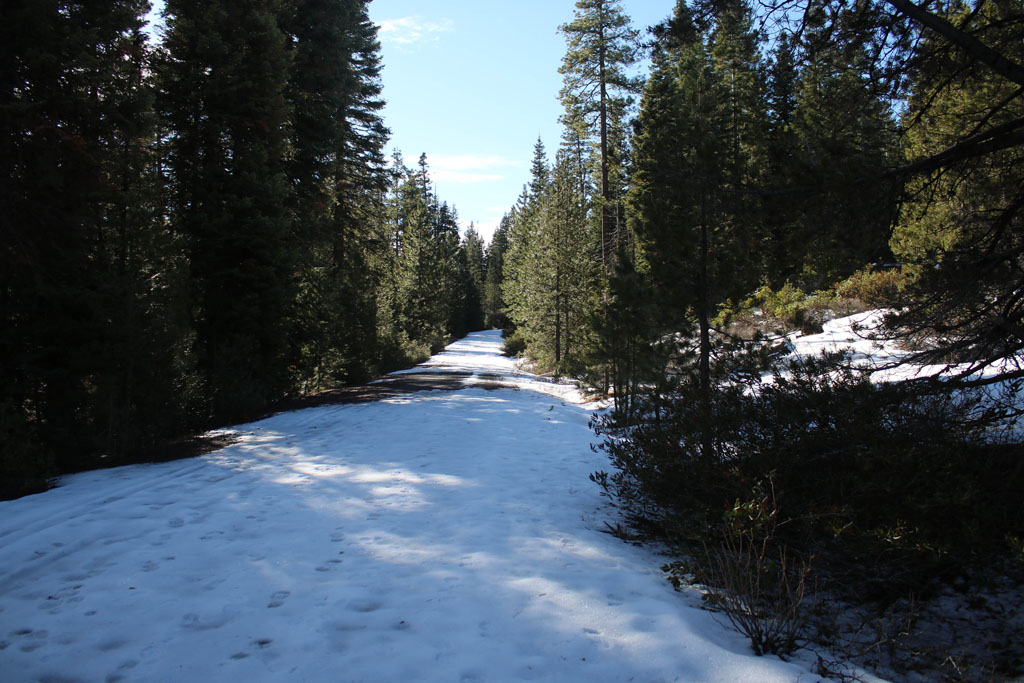 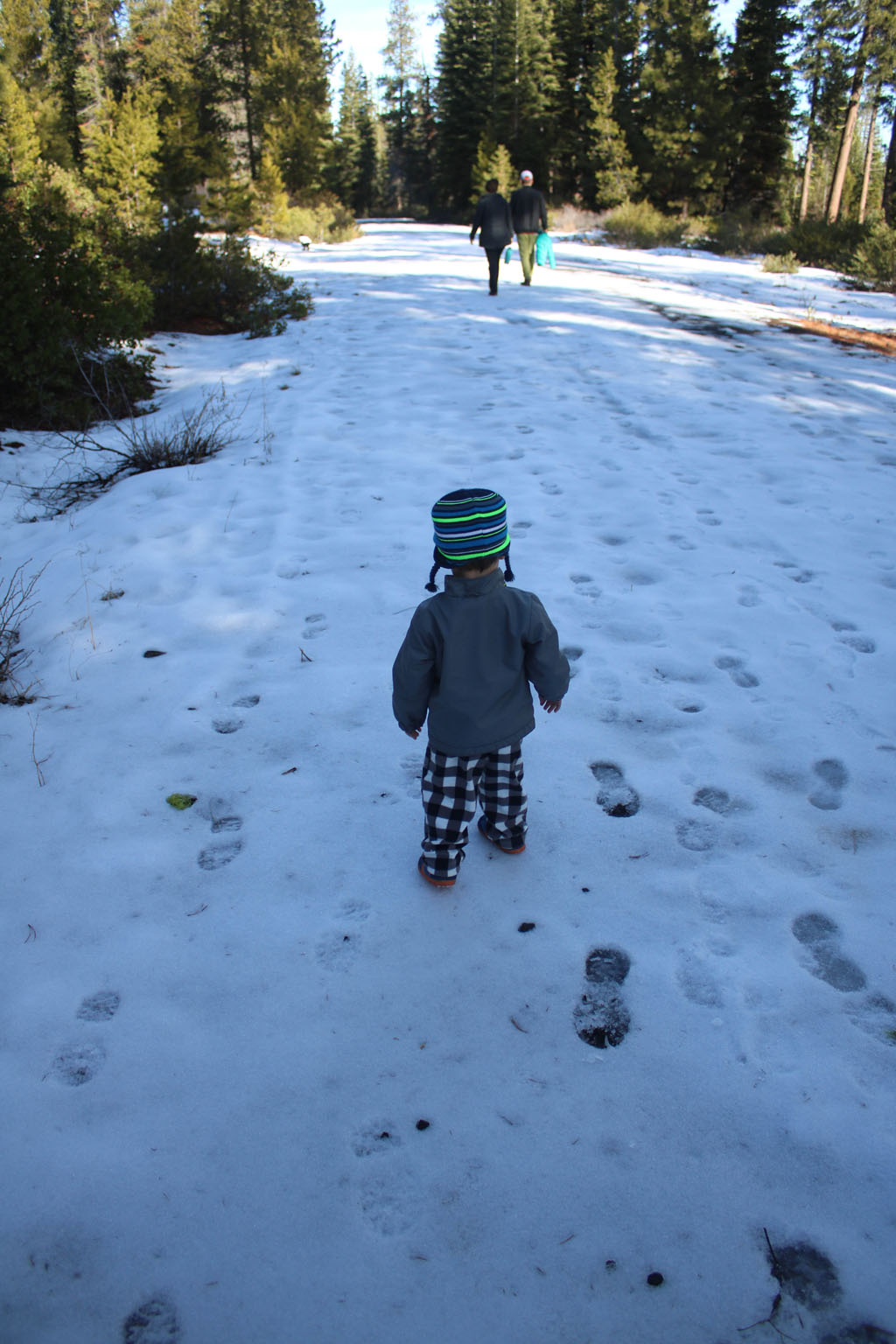 And Ben helped on the way back. 🙂 I definitely need to practice carrying Logan in the backpack before hiking again. It was also a weird distribution of weight. A few times I felt like if I lost my balance and fell backwards, I’d just lay there like a turtle. 😉 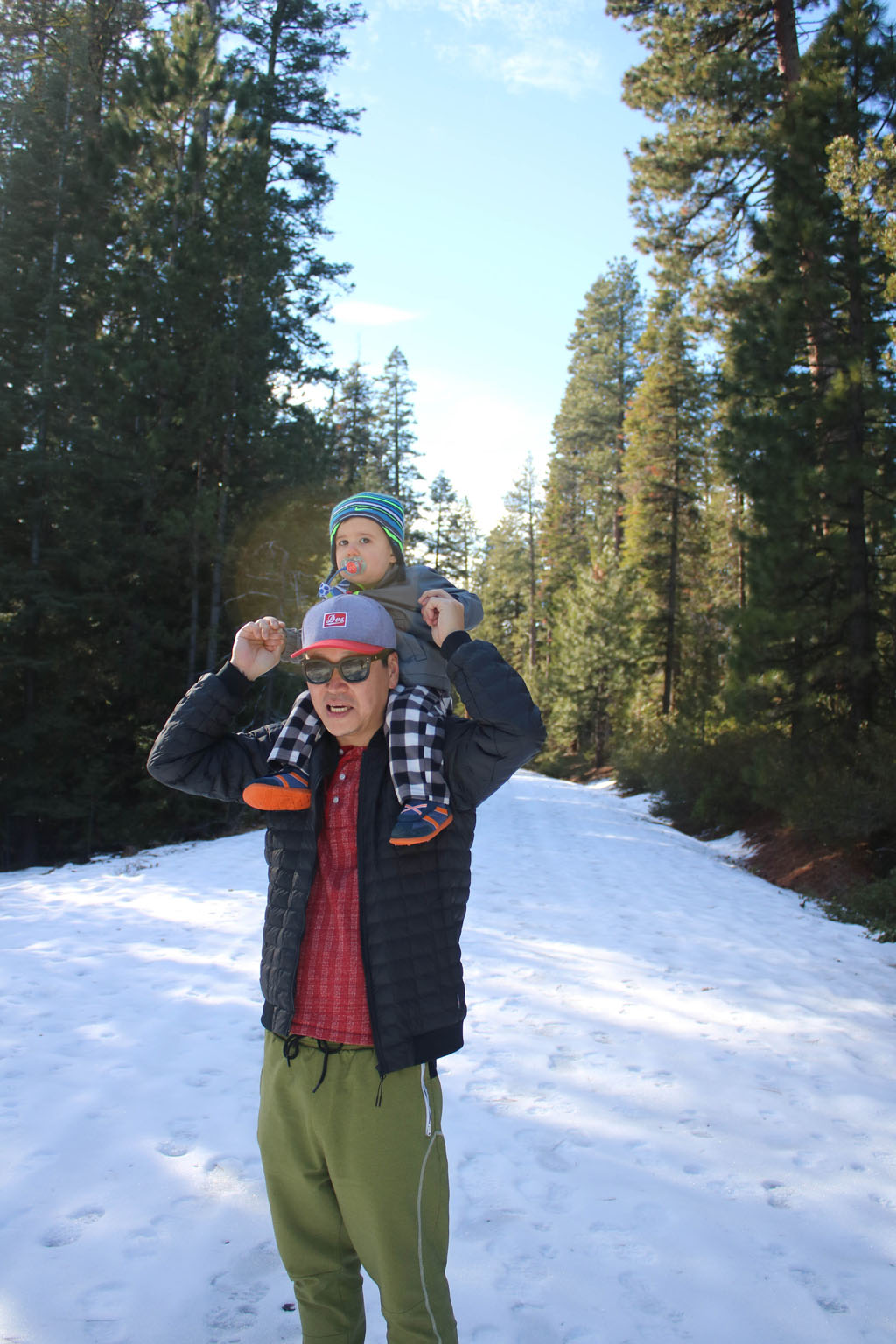 We went back to the house and had lunch (sandwiches) and everybody kind of chilled. Logan didn’t want to take a nap so I decided to go for a little drive and give him a chance to nap in the car. I drove around some of the fancy areas of downtown Bend, up in the hills, overlooking everything. I was pretty high up there and there was a ton of mist and fog. It was cool and kind of spooky.

Then I pulled over because all of a sudden a huge deer ran across the road and into someone’s front yard! I stopped to watch as the deer grazed and then another deer joined him. I sat there for about 15 minutes and just watched as a family of deer (about 5 of them) were all together. It was really cool to see! I posted some videos on my instagram. 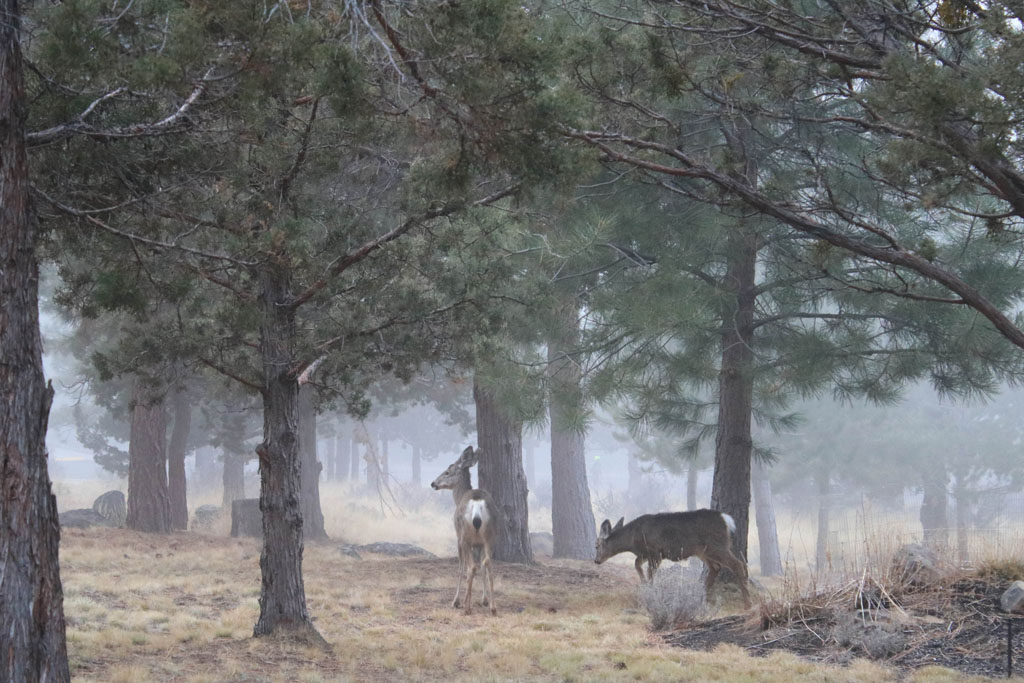 I went back to the house eventually and the guys watched the kids while Charla and I went for a walk and back to Growler Phil’s because I wanted more Boneyard. 😀 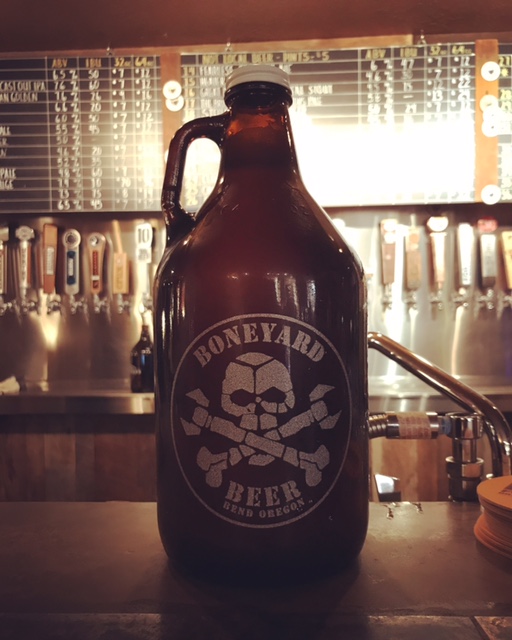 We ended up ordering pizza for dinner and just eating in. It was easier with the kids. There was a restaurant we REALLY wanted to try but the wait was SO long we gave up. 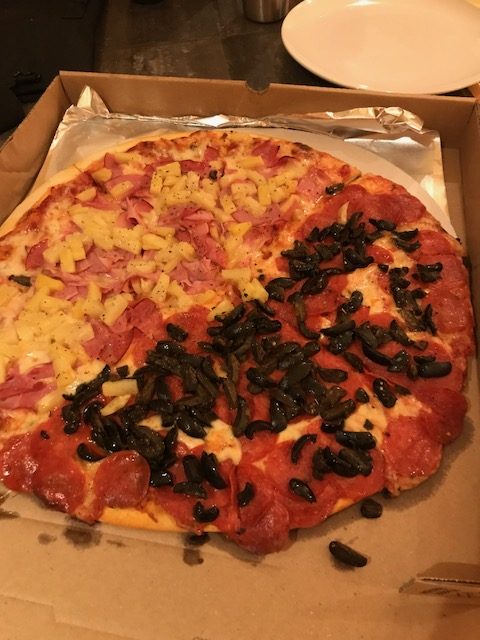 The kids went to bed after dinner. I escaped to the hot tub and enjoyed it by myself for about 30 minutes, reading my book and eating gelato (!! perfect !!) before Ben and Charla joined me for a bit. Man, after spending an hour + in the hot tub relaxing, I slept SO good that night. I think we might need a hot tub at our house…

Monday Morning…bright and early…packing, eating breakfast, drinking coffee, and then we went to the park for one last hurrah. 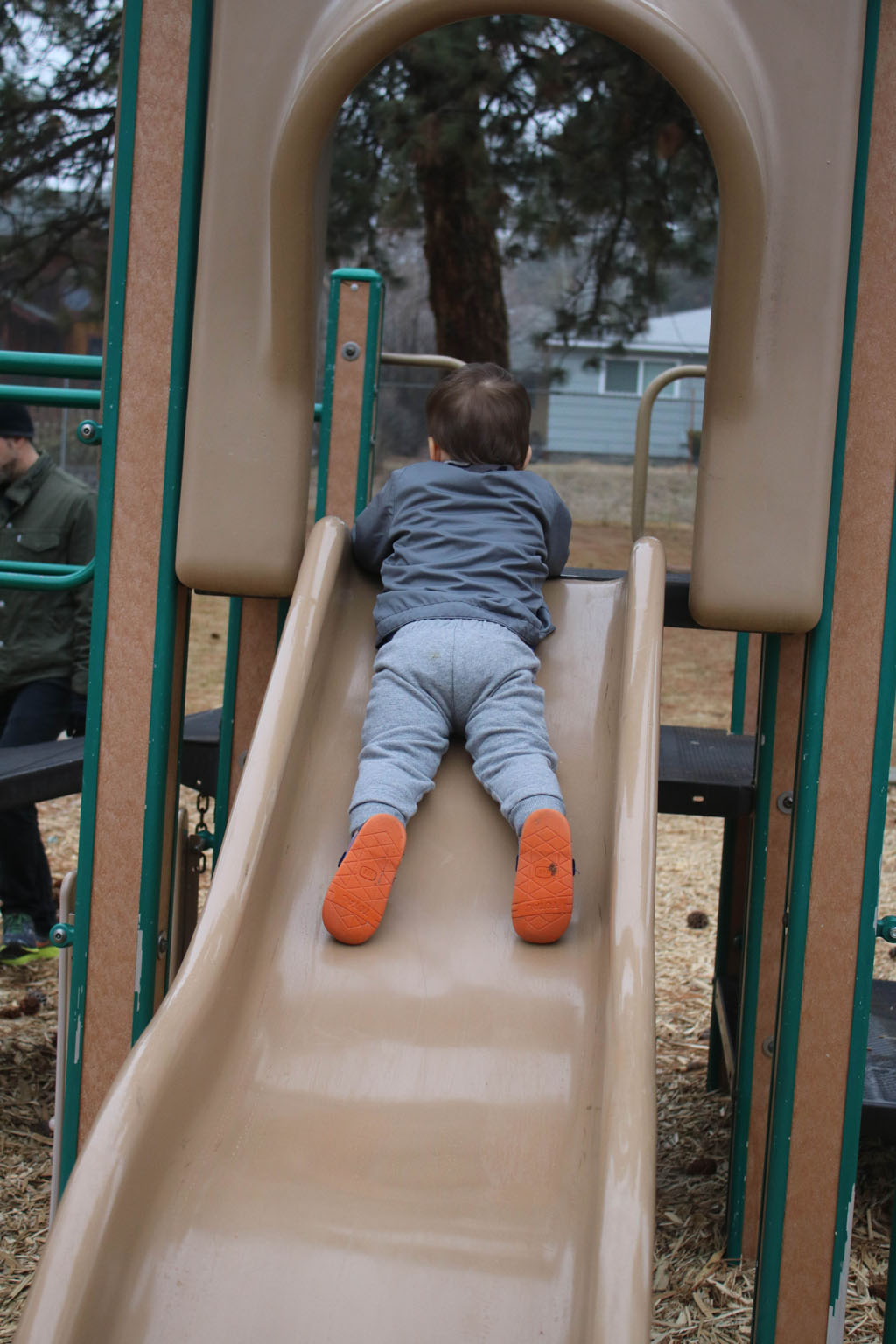 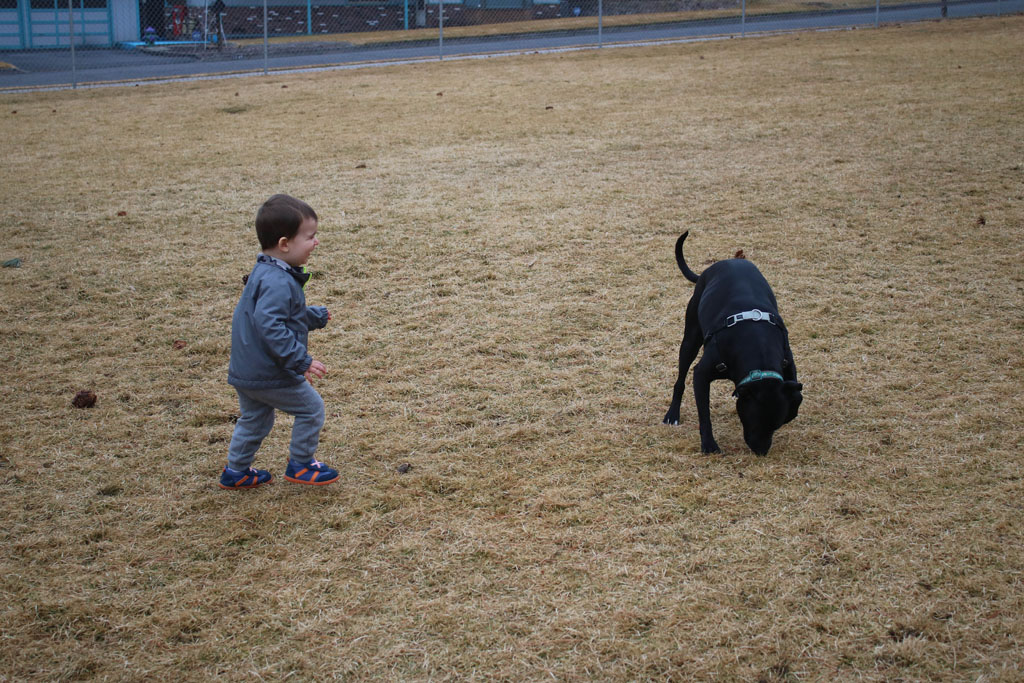 I feel so bad for Bella. Saturday was her birthday (HAPPY BIRTHDAY BELLA!) and she was basically cooped up in the house most of the weekend because there wasn’t any snow, we didn’t take her on the hike because Virginia Meissner doesn’t allow dogs…I just felt bad. And I felt bad for our friends who didn’t get to snowshoe. SIGH. Seriously. Where is the snow?!?

Monday we drove back to Portland and Logan slept the entire drive home, it was amazing. Unpacked, chores, laundry, I hit the gym since I didn’t get any workouts in really, and then I collapsed into our bed for a fantastic night’s sleep!