Usually my huge family gets together for our annual Christmas party and white elephant gift exchange. There’s tons of food and drink and people and it’s a blast. For whatever reason that didn’t happen this year, so some of my cousins decided to throw our own little Cousins Christmas get-together. I’m glad they did! It was a small group of us because so many of us are scattered around the country (and world) but it was so good to see some of them!

First, I went to the gym. 40 minutes of weight lifting (a mixture of body weight exercises like squats, some free weights and then weight machines) and then 30 minutes “running” on the treadmill. Jog/walk intervals about 2-4 minutes each. I did 1.4 miles on the treadmill. 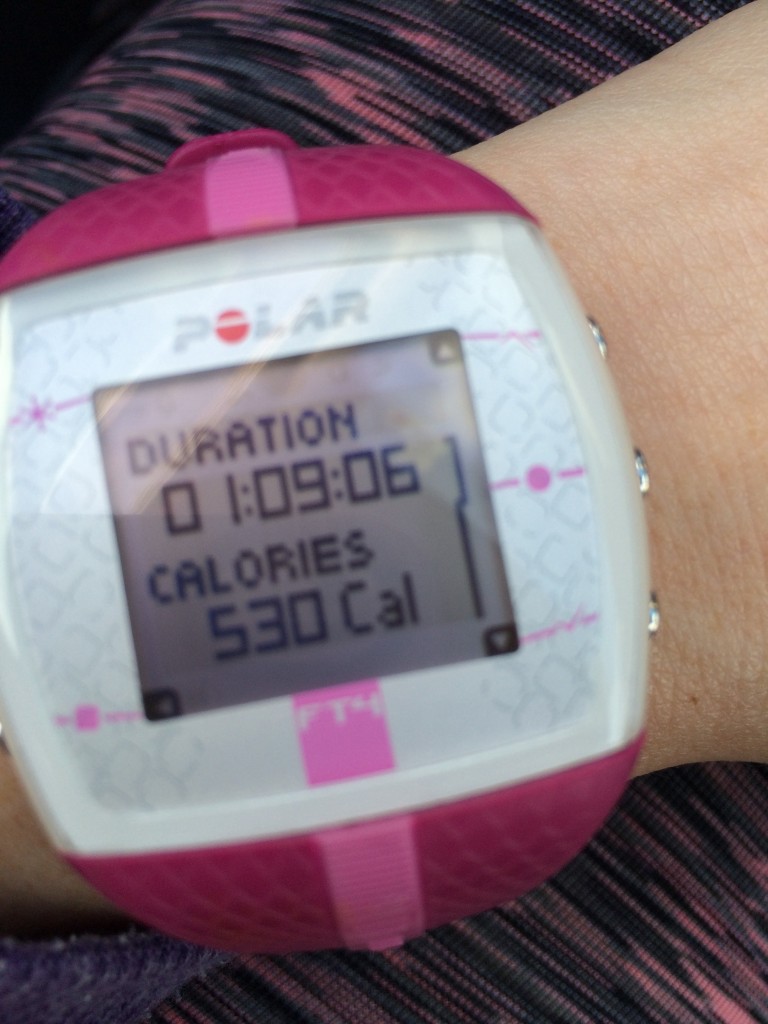 Then Michael and went out to my aunt’s house for the festivities, Mexican food themed. Yum! 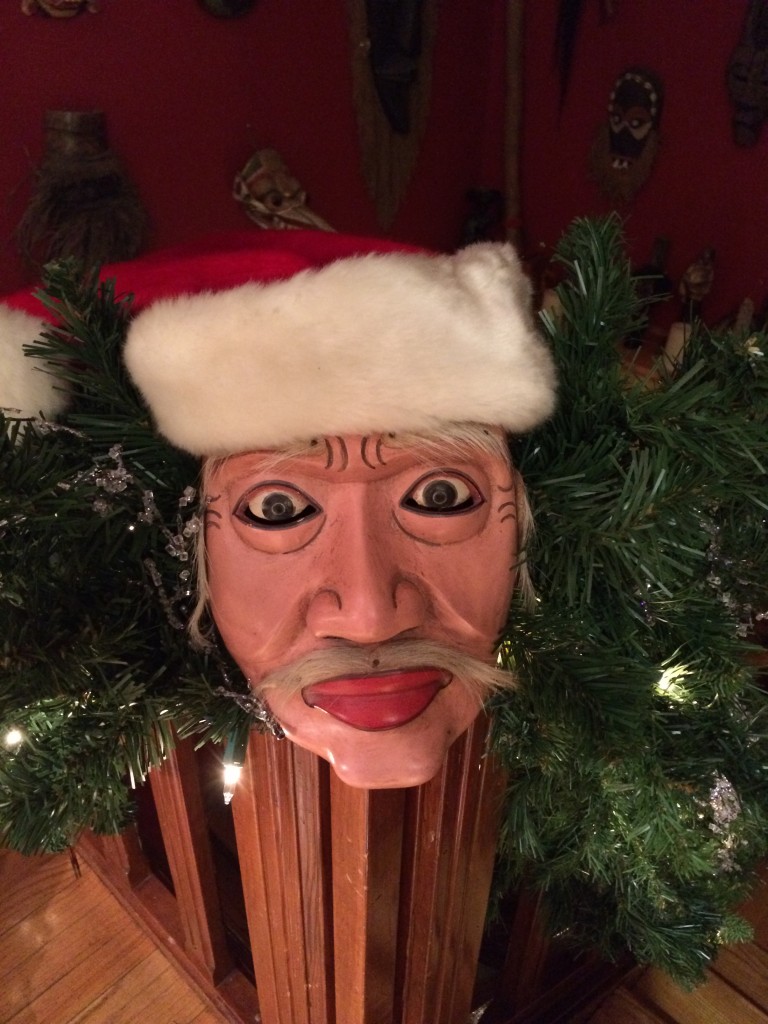 It was nice of my aunt letting us crash her house for our party. I had cousins come from Seattle, Eugene and Salem. When we arrived my grandma was also there! That was a nice surprise I wasn’t expecting. My aunt had picked her up in Seattle and was taking her to the farm south of Portland to spend Christmas with them. It was great to be able to see my grandma (who I think turned 95 this month) for a little bit. My grandma tried to pawn off her Moscow Mule drink to me and I kind of laughed and pointed to my belly and she said she’d forgotten. Ha!  They left and it was just us cousins for the rest of the day. 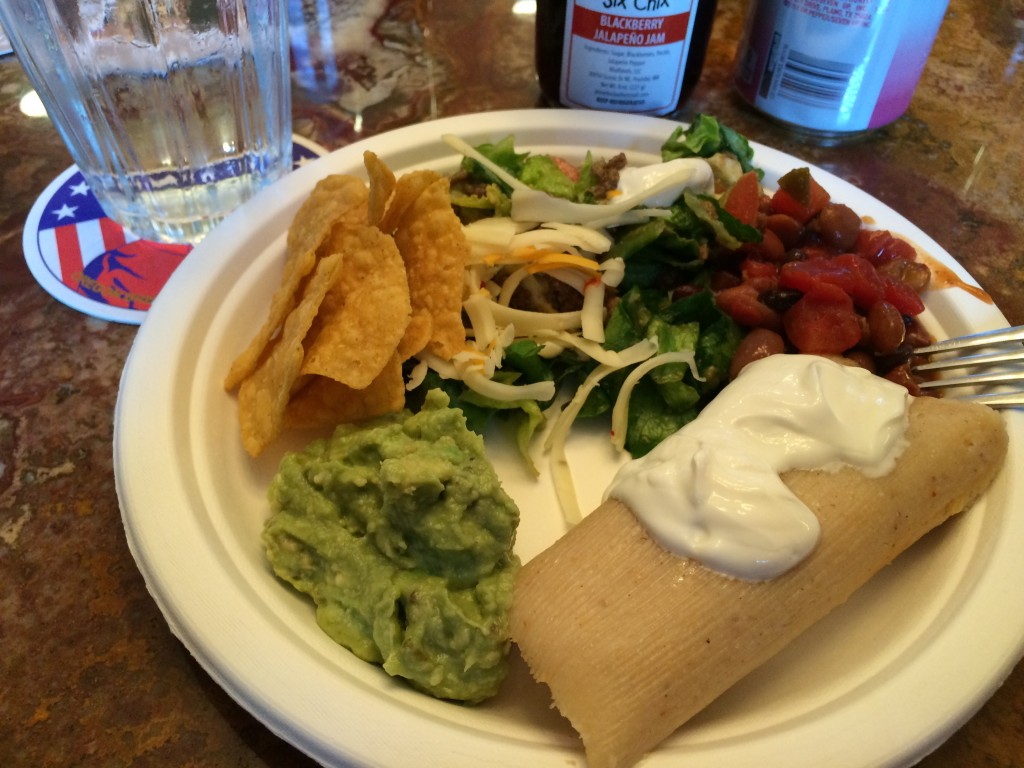 Lunch was so tasty. My cousin Di made tamales. Michael made his amazing guacamole. My cousin Anna made taco salad. I made a bean thing –four different kinds of beans, Mexican spices and Rotel cooked up. Everything was delicious. I was famished and the food hit the spot and satisfied my Mexican food craving. 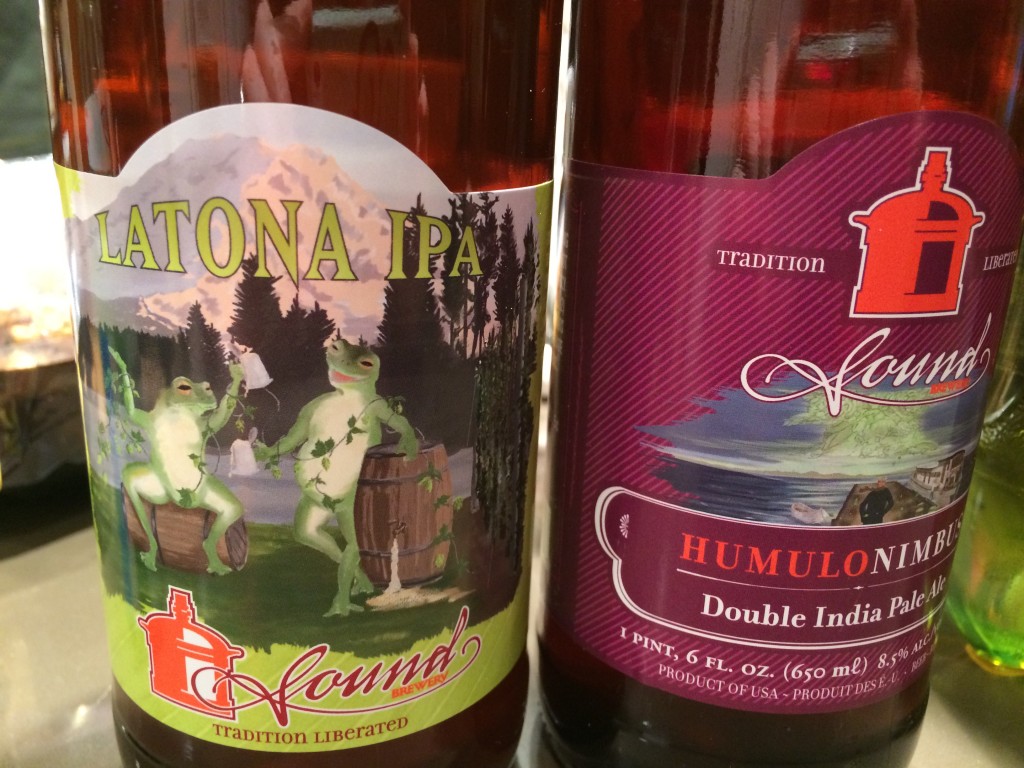 My cousin’s husband works at Sound Brewery and brought some beers. I liked the label with the frog on it. 🙂 We spent a few hours just hanging out and catching up, having fun and then called it good. The rest of them were going out to a show that evening. Michael is getting over a cold and I wasn’t feeling up to going out for a late night (as much fun as it did sound to hang out with everyone longer) so we took some pictures and said goodbye. 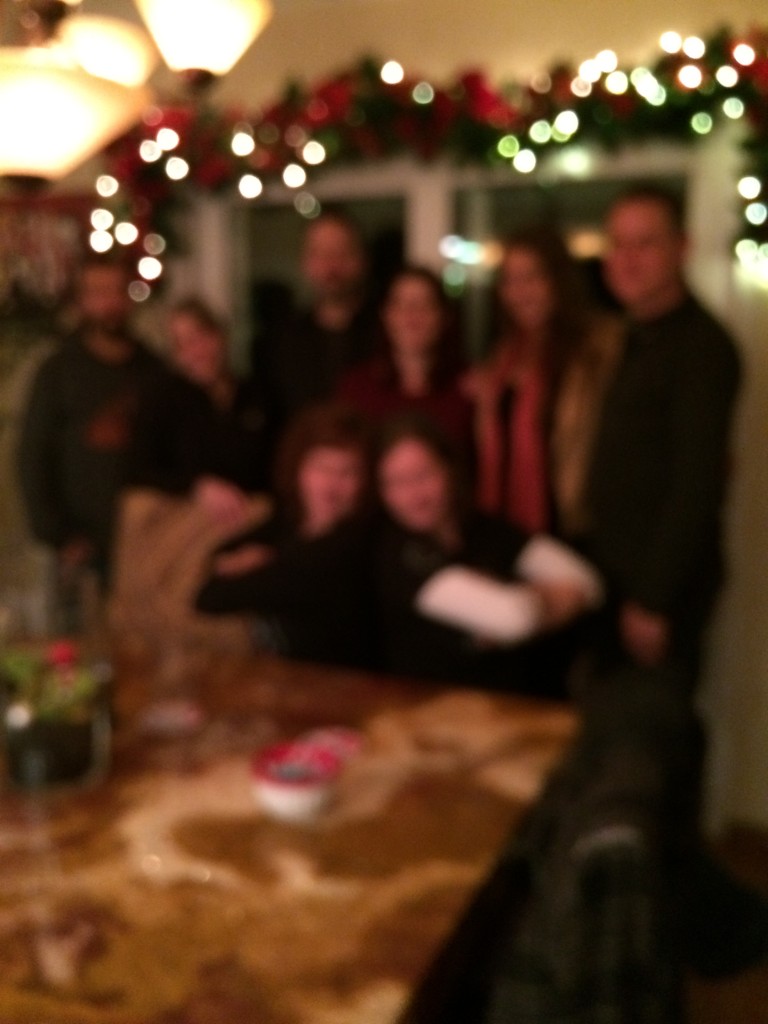 LOL My aunt took that photo. Too much egg nog?? 🙂 We were laughing so hard. It took several tries but we finally got a good photo: 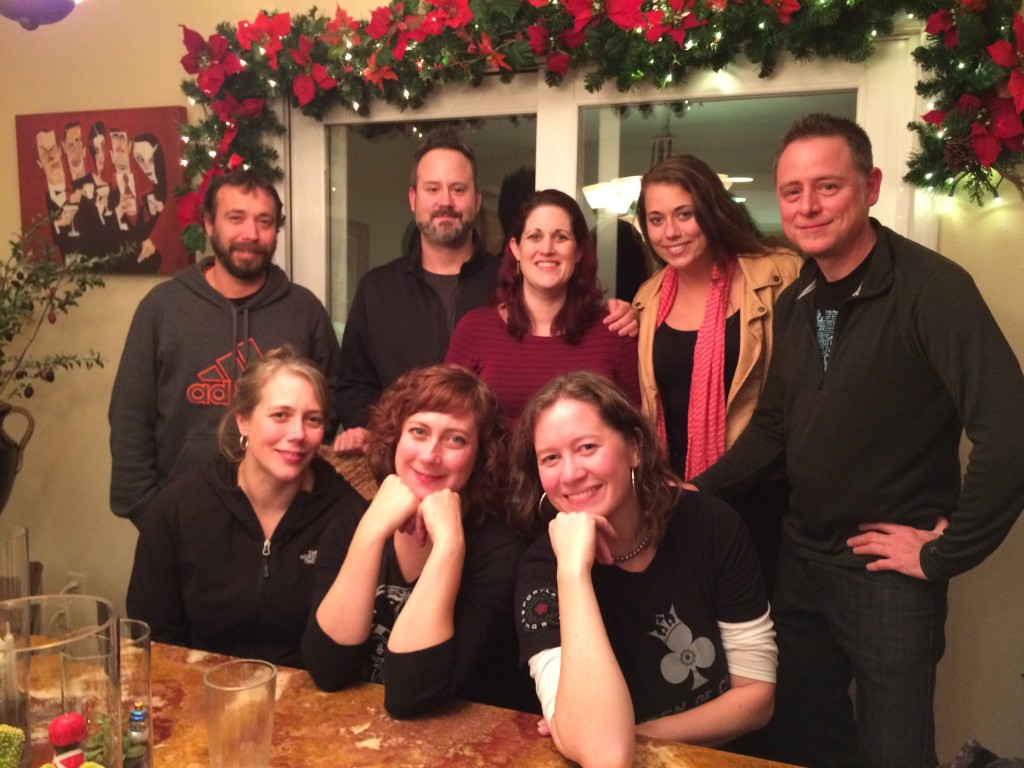 It was so much fun. I’m glad we organized something and got together instead of just skipping it this year. I wish it could have been the whole family, but maybe next year.  Michael and I went home and I immediately got in my PJs, turned on the heating pad and put my aching feet up. Exciting Saturday night for us!

Sunday morning I did 4.5 miles on the elliptical: 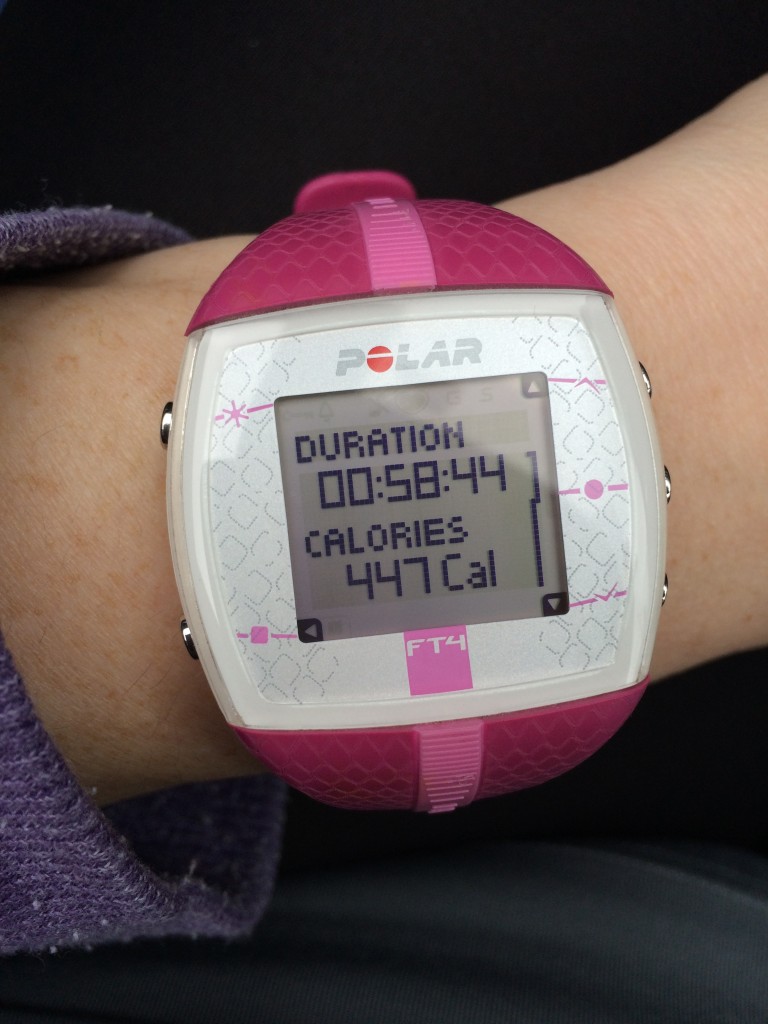 And then Michael and I went to the hospital for our tour of Labor and Delivery! I was excited for the tour because I had no idea what to expect and I hate the unknowns. It’s the control freak in me. I really wanted to see what the delivery rooms looked like and the recovery rooms.

The tour started with an introduction on where to park, how to check in, etc. We walked over to Labor and Delivery and got to see where the check in is, and then see the room where you labor. It was a really big room. I’m guessing because there are often a lot of people in that room when things get going for real. 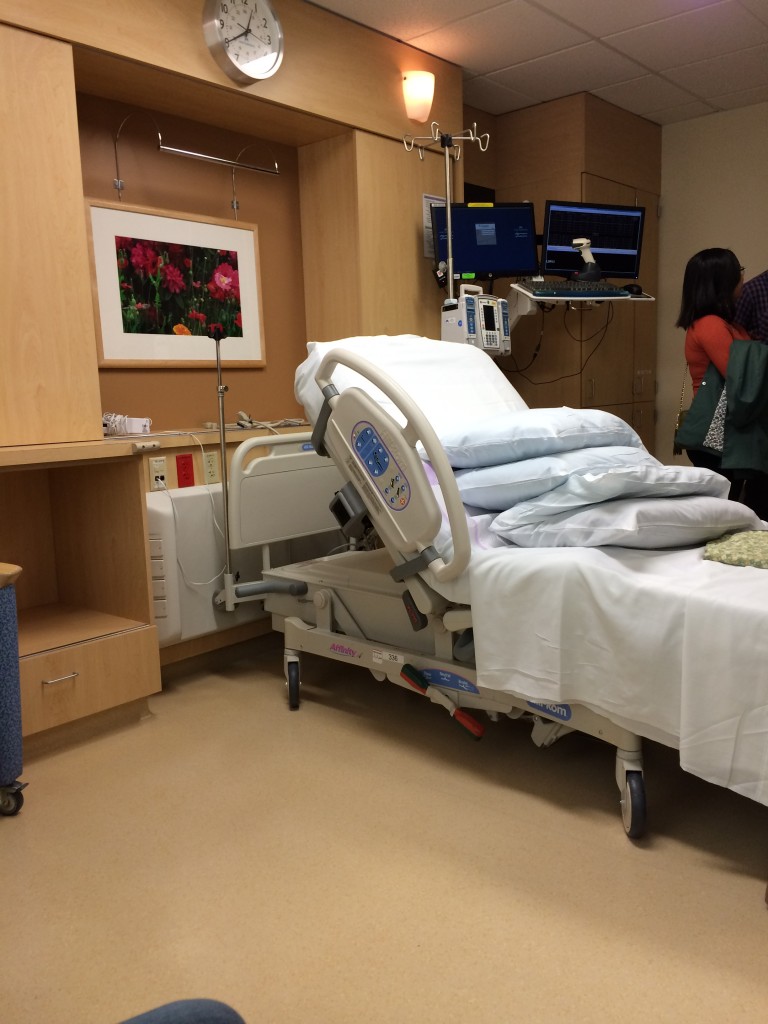 The guide talked about what to expect and that there was a tub in the labor room, plus there were labor rooms that had big tubs like this one: 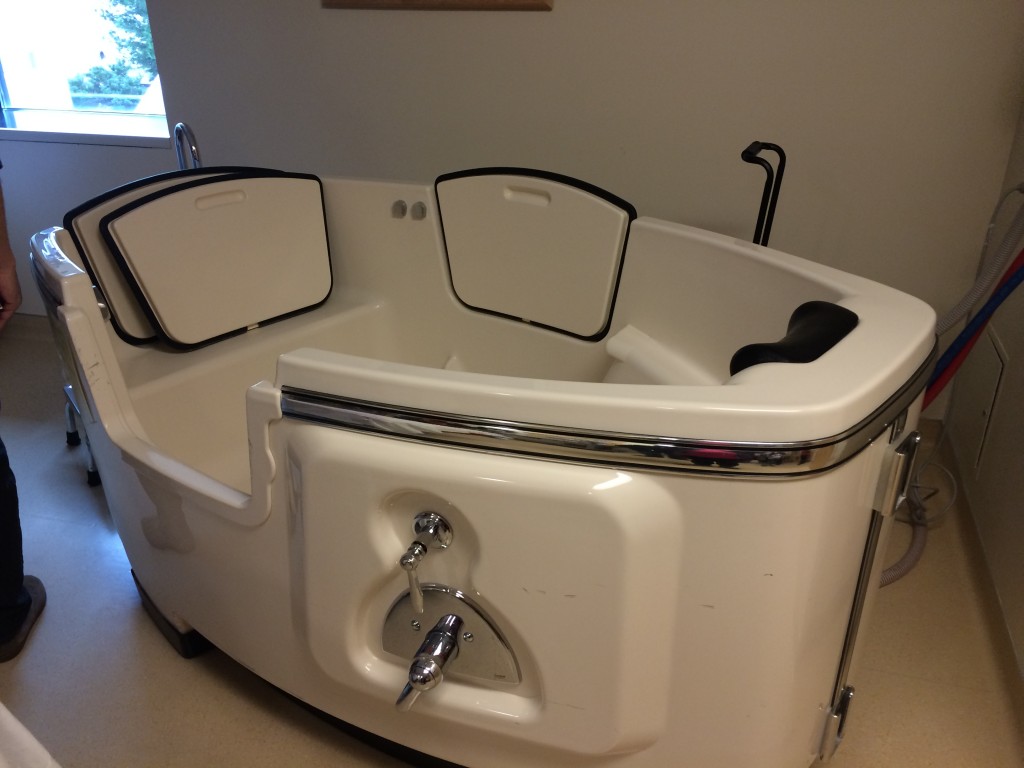 There were a lot of things to assist with the birth. A ton of different kinds of bouncy balls, apparently there’s a squat bar that can attach to the bed for different positions. 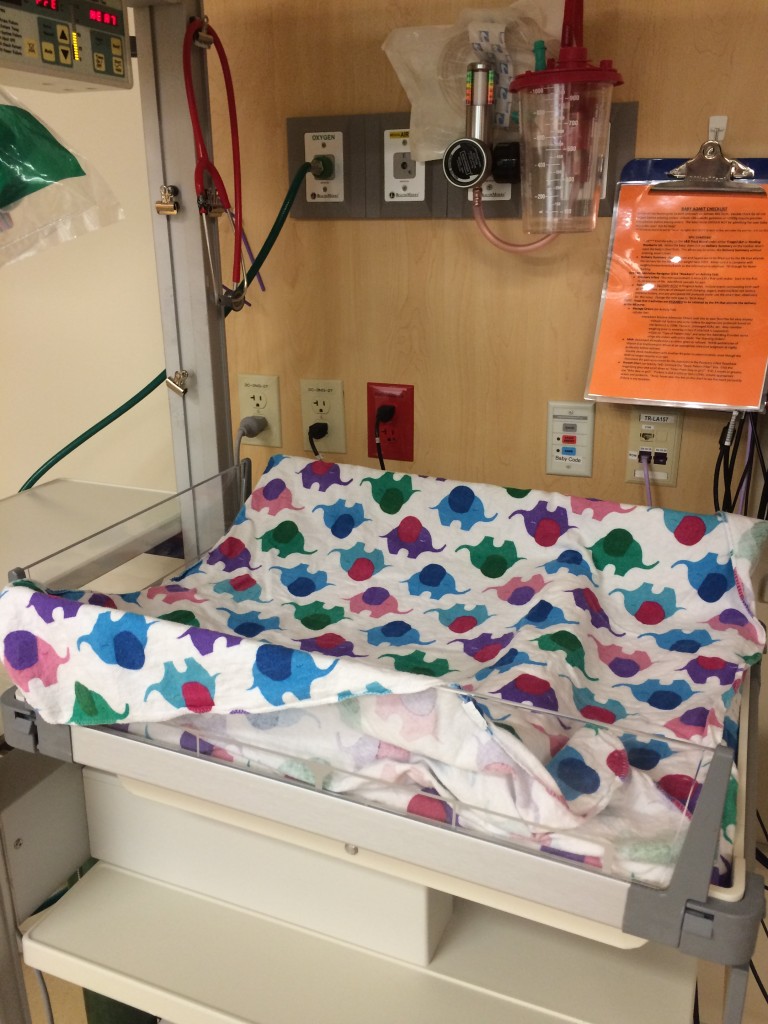 There was a little incubator for the baby with a heating pad under the blanket. They don’t have a “nursery” and the baby pretty much stays with you the entire time, unless you have to go to NICU. I like that. They also had a padded couch/lounger thing for the dad to sleep on if necessary. 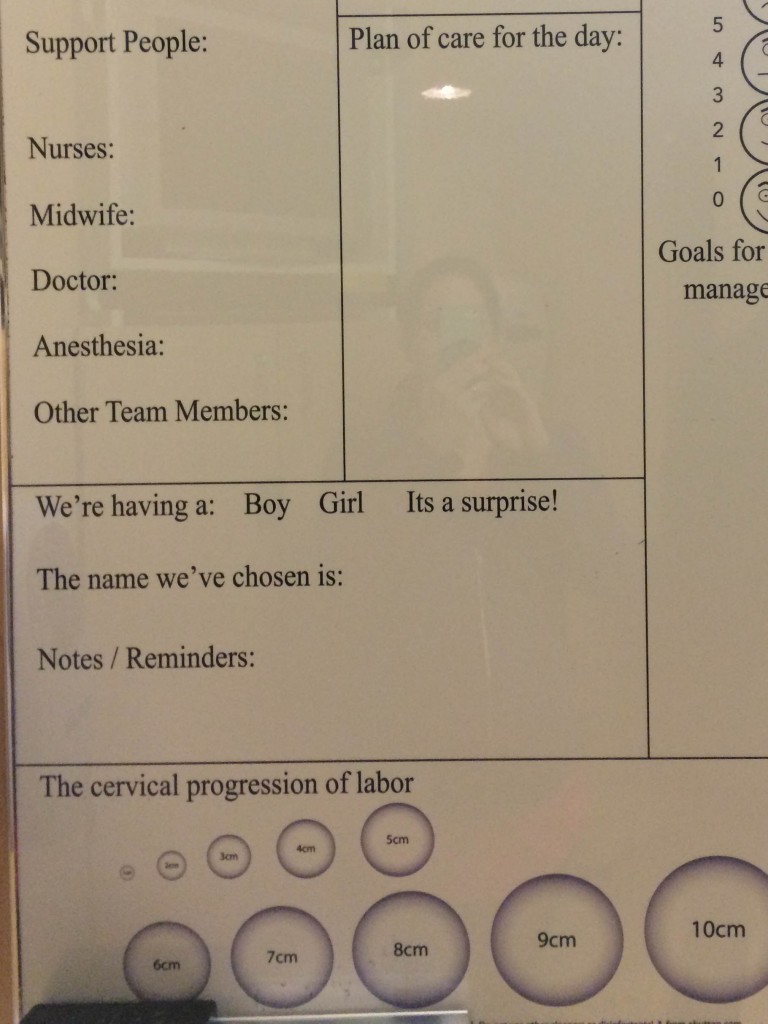 The guide said that they try and give the baby to mom immediately and then everyone leaves the room for about an hour to bond and stuff. Then they come back and do all the testing things they normally do for the baby. After a few hours they move you to the recovery room, where you’ll stay for a few days. That room was a lot smaller.

I’m glad we did the tour and got an idea of what to expect. I admit, I was a bit overwhelmed and anxious at the beginning of the tour but once we got to the rooms I relaxed a bit and by the end of the tour I felt ok. Of course, things don’t always go as planned but it’s nice to see what everything looks like. One weird thing — it was SUPER quiet. I didn’t hear a peep the entire time we were at the hospital. I wasn’t expecting screaming women but not even a baby crying? It was very odd.

After the tour we turned in our pre-registration forms and then went to lunch at McMenamin’s.  Michael got the Italian salad. I got the grilled Tuna melt sandwich on rye with cajun tots. The tots are fabulous!

Overall it was a good weekend, even if it was busy busy busy. The next thing to check off our to-do list is the birthing classes! Those start in January.

While my weekend started off not so great, with Bella getting injured, some of the weekend was actually great! Saturday I got up early to go to this kettlebell gym I’ve been trying out (more on that later), then came home to make my potluck dish and we headed out for my family Christmas party. It was at my aunt’s house in Troutdale this year. It was also my grandmother’s 92nd birthday! 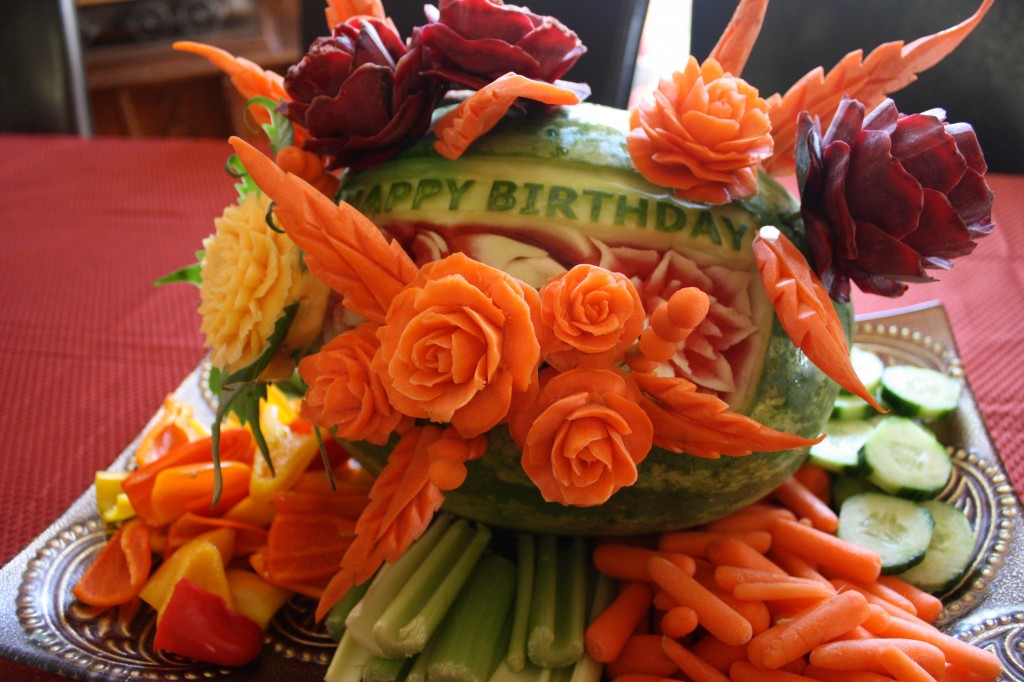 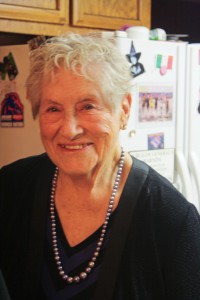 As usual there was a TON of food there. Someone had made my grandpa’s awesome garlic dip, I made a brussels sprout salad, and Michael made his famous mac n’ cheese. There were so many things to snack on it was hard not to just graze all afternoon long. 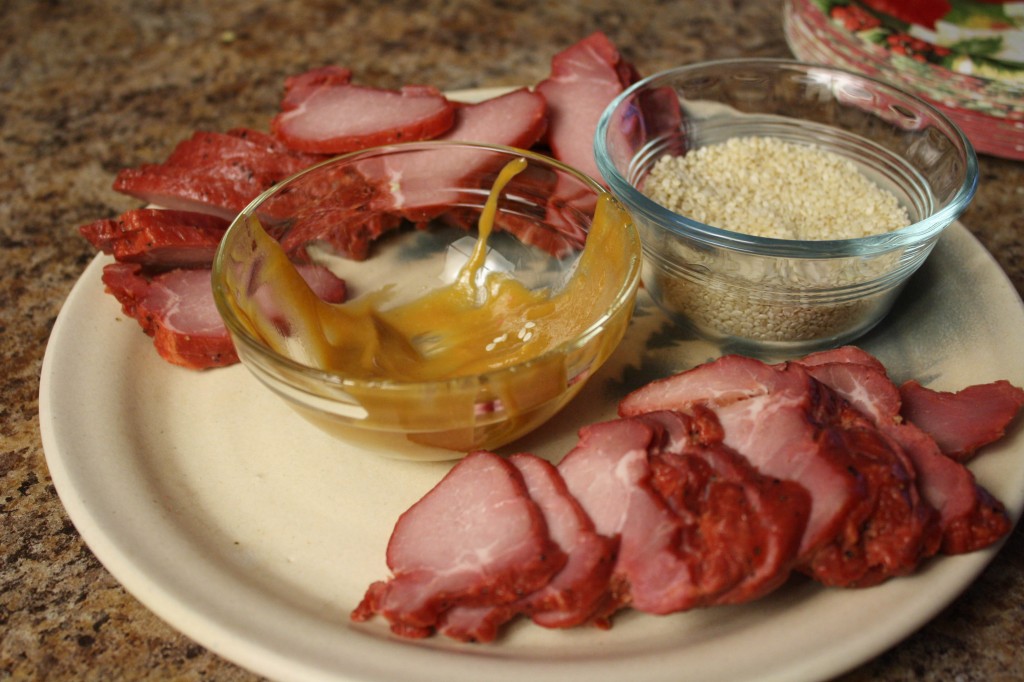 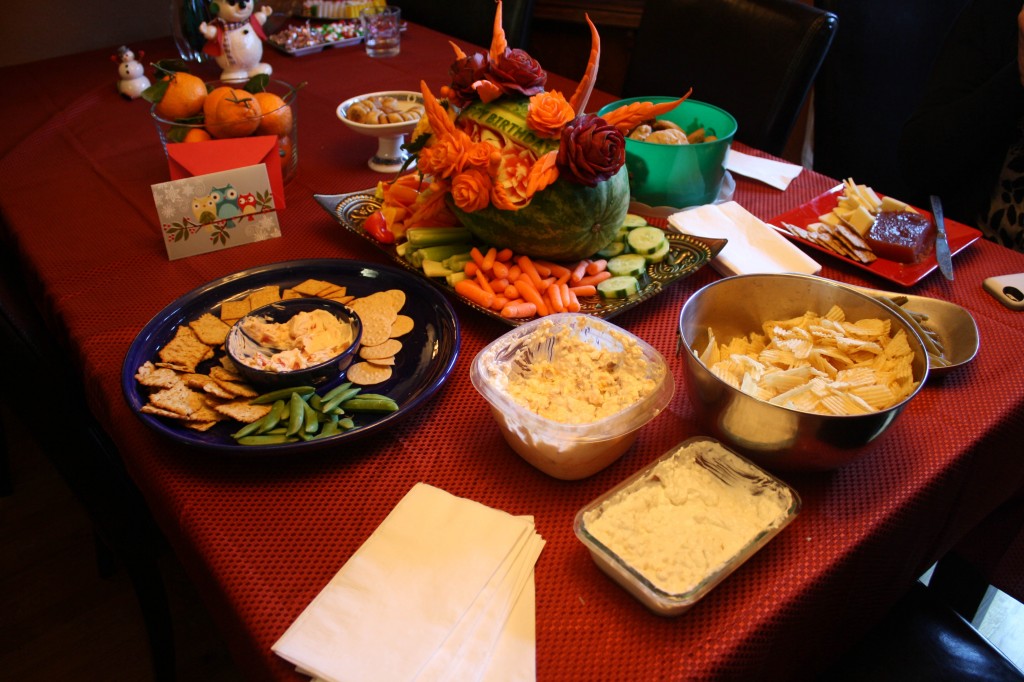 There was also plenty to drink too! Lots of wine to choose from. I stuck with water for most of the afternoon and then finally had some. My aunt also brought out a bottle of her AMAZING eggnog, affectionately named Gregnog after my cousin who had way too much of it a long long time ago. My aunt keeps her recipe secret and I would LOVE to have it! It’s the best eggnog I’ve ever had, and it is potent! One small glass is usually enough for most people. 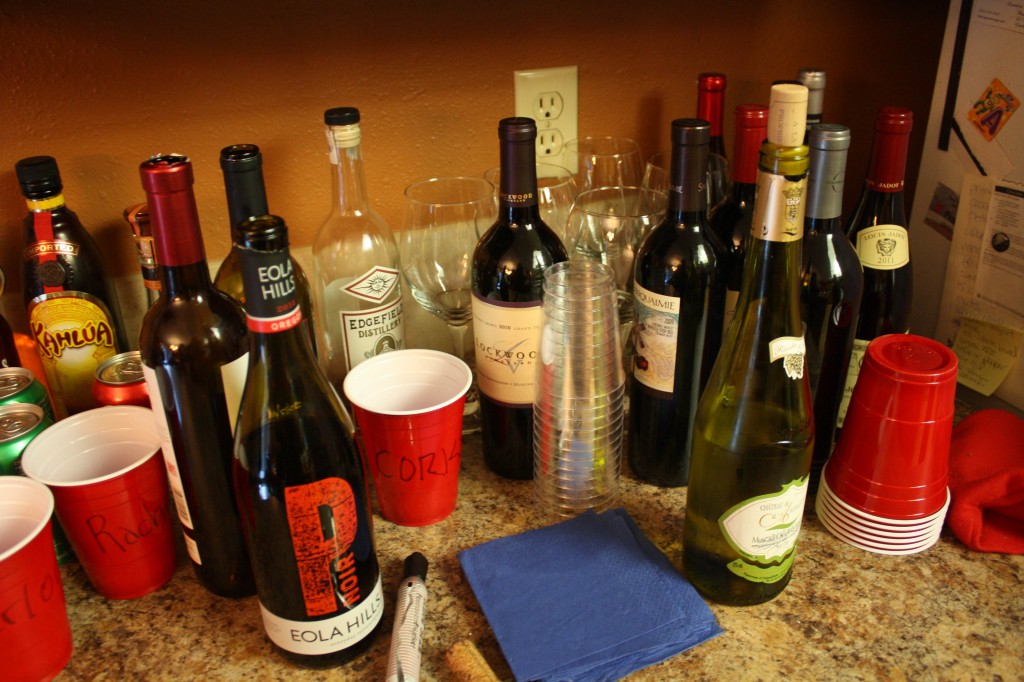 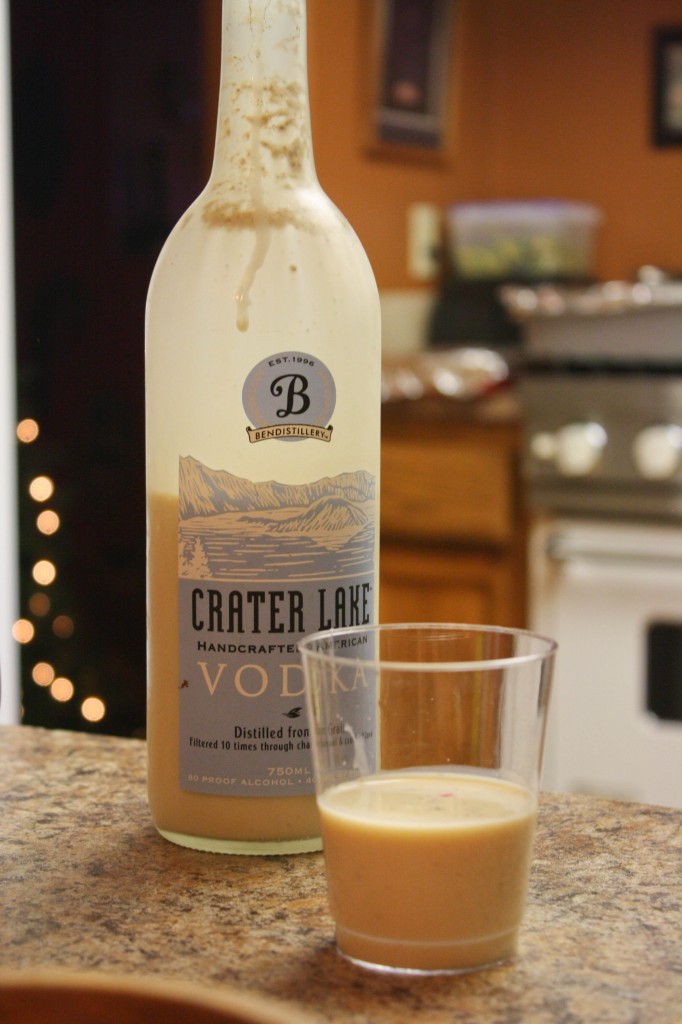 Yum yum yum! Gregnog! Lots of family came from all over –a bunch from Washington, Texas, Oregon and Wyoming. It was so good to see family I hadn’t seen since this summer (and a few since last Christmas). There was also a lot of shenanigans and photo-bombing this year. 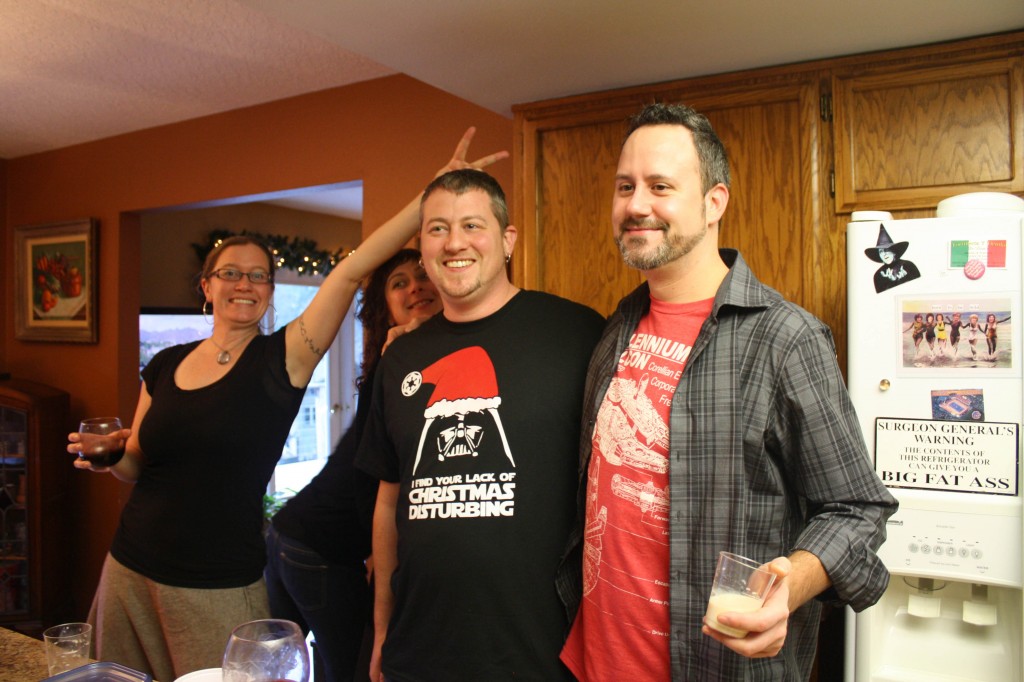 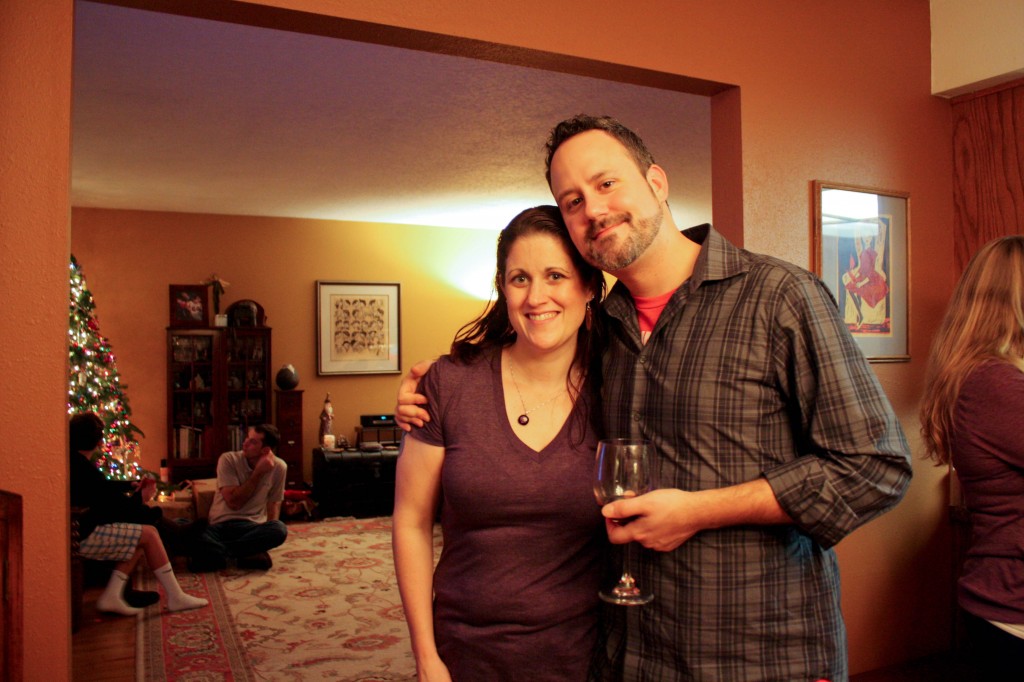 The group was a little smaller this year as many family members couldn’t make it. (One cousin is graduating from medical school next weekend, the other is in the Army and my brother and his wife are too far away to visit.) It would have been nice if we could all be together. After it got dark we had a visitor. 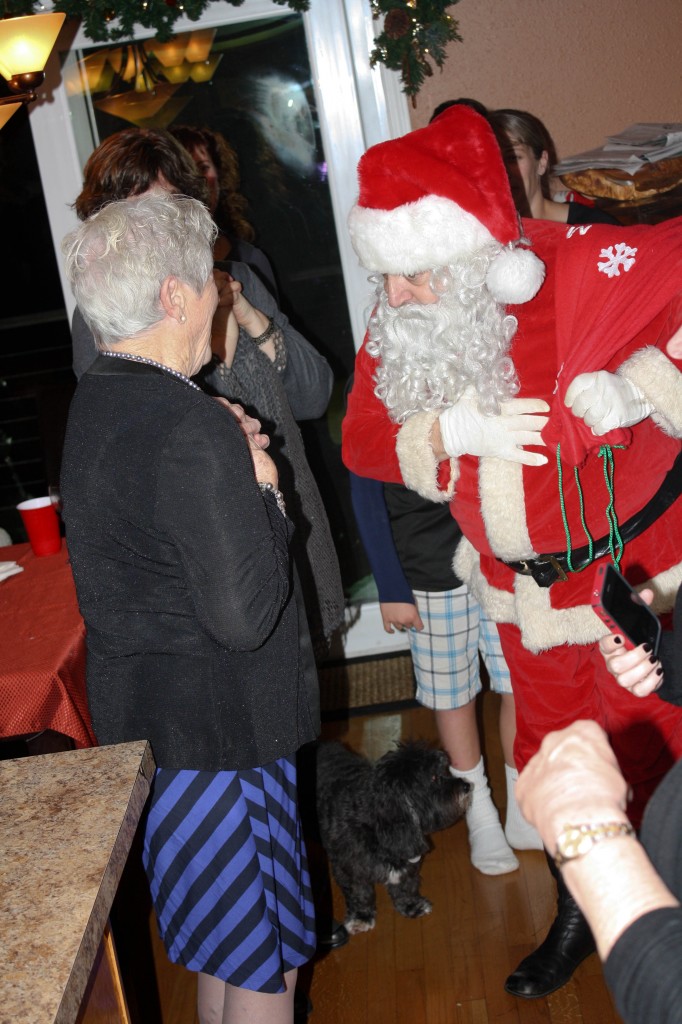 A friend of the family that has always played Santa paid us a visit and especially came for Grandma! She got an extra special present for her birthday: 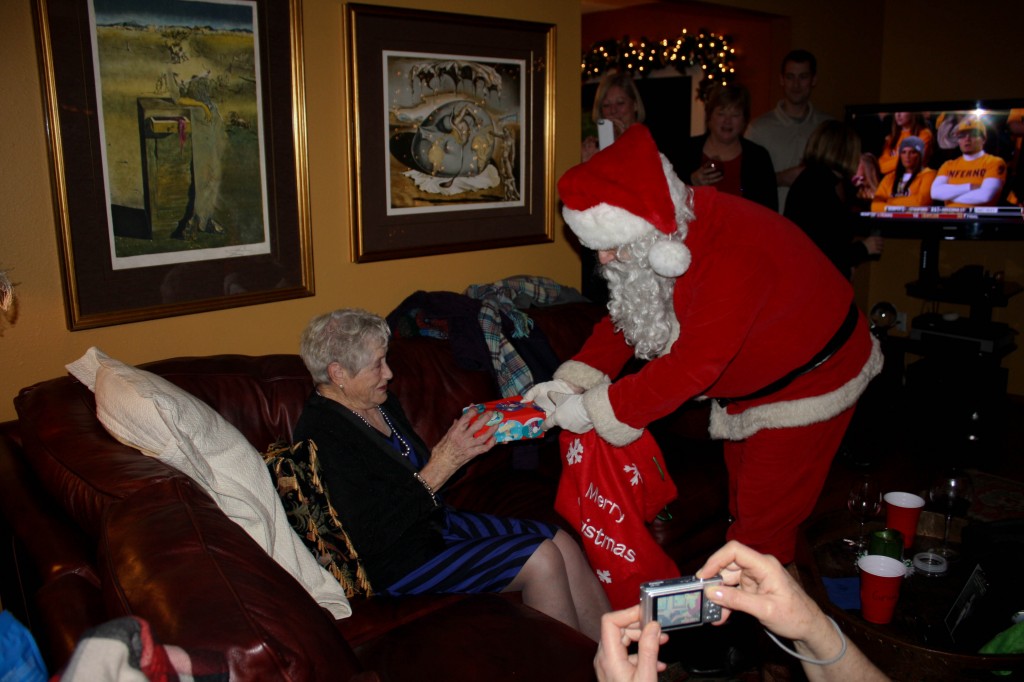 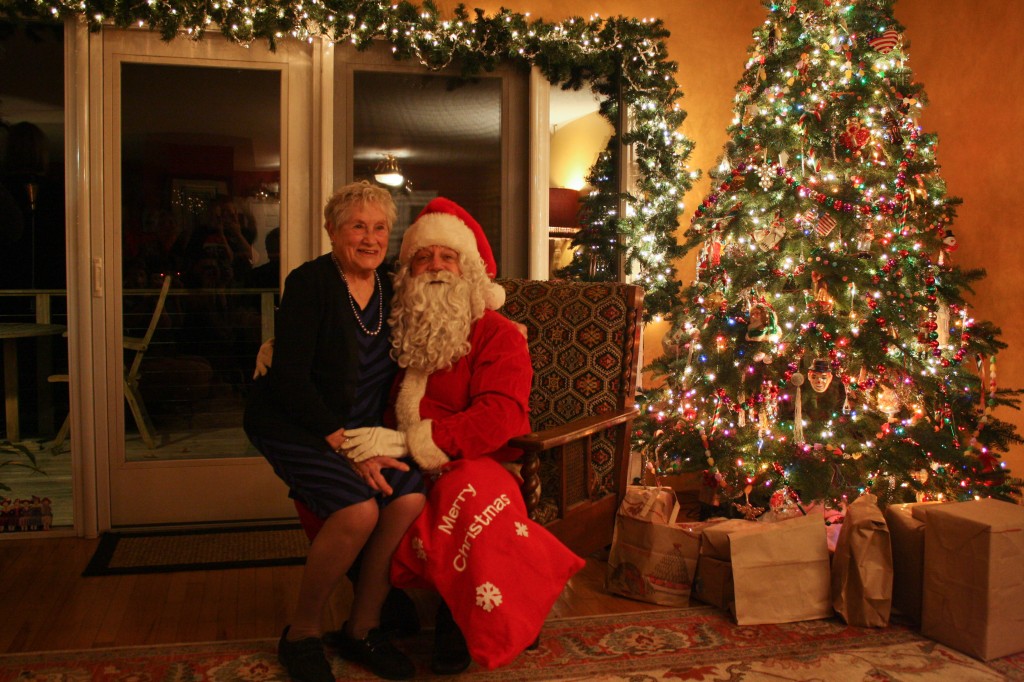 I love that picture of grandma! Haha! And I also love that even though all the little kids are old enough now to know the truth, they all still play along. Everyone is a good sport. It’s kind of my favorite part of the Christmas party. The kids sang a Christmas song with Santa and then he was on his way. A little while later, mysteriously our friend Randy showed up just in time for dinner. 😉 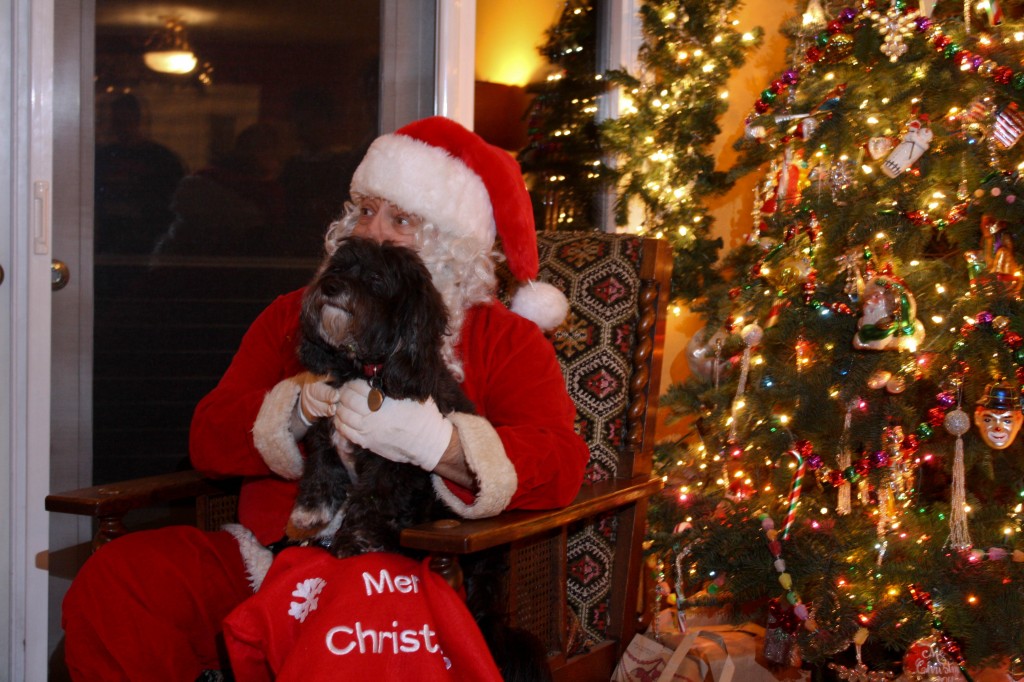 Dinner was GOOD. It’s always good, but my uncle Pete is the master of the BBQ. He grilled and cooked a prime rib and a pork for three hours out in the frigid air and created an amazing dinner. I had the pork and it was perfect; couldn’t have been better. There was the mac n’ cheese, my salad, a caesar salad, crusty french bread and two different kinds of potato casseroles. My aunt also brought some of her homemade pickled beans which were so spicy and delicious. She said the secret to pickling beans is to add grape leaves in the jar because it makes them crunchy instead of mushy. Good tip. 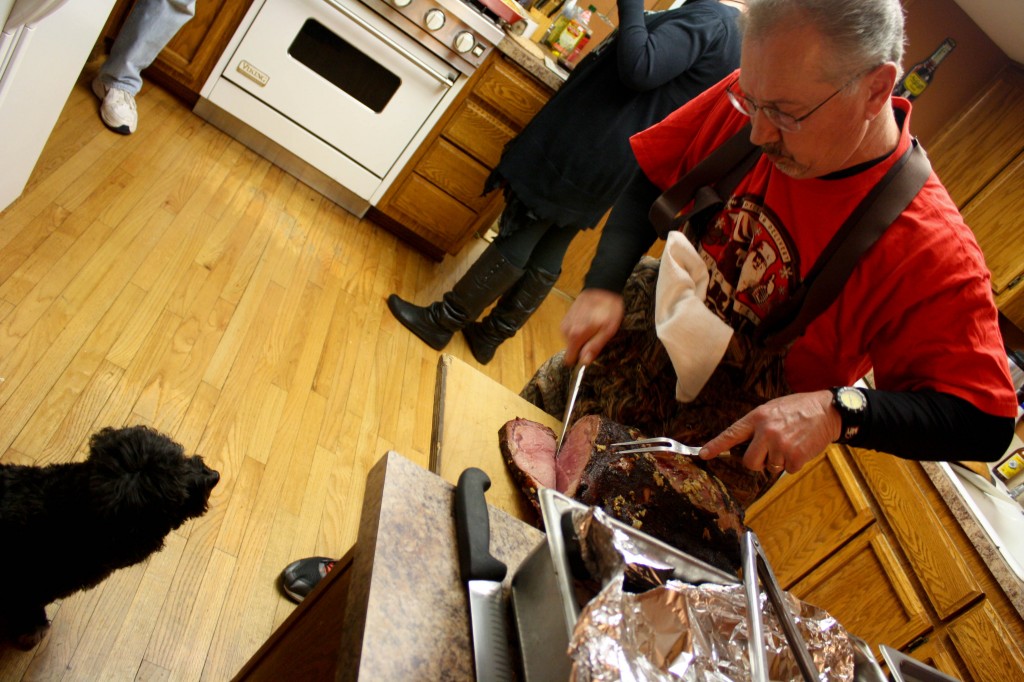 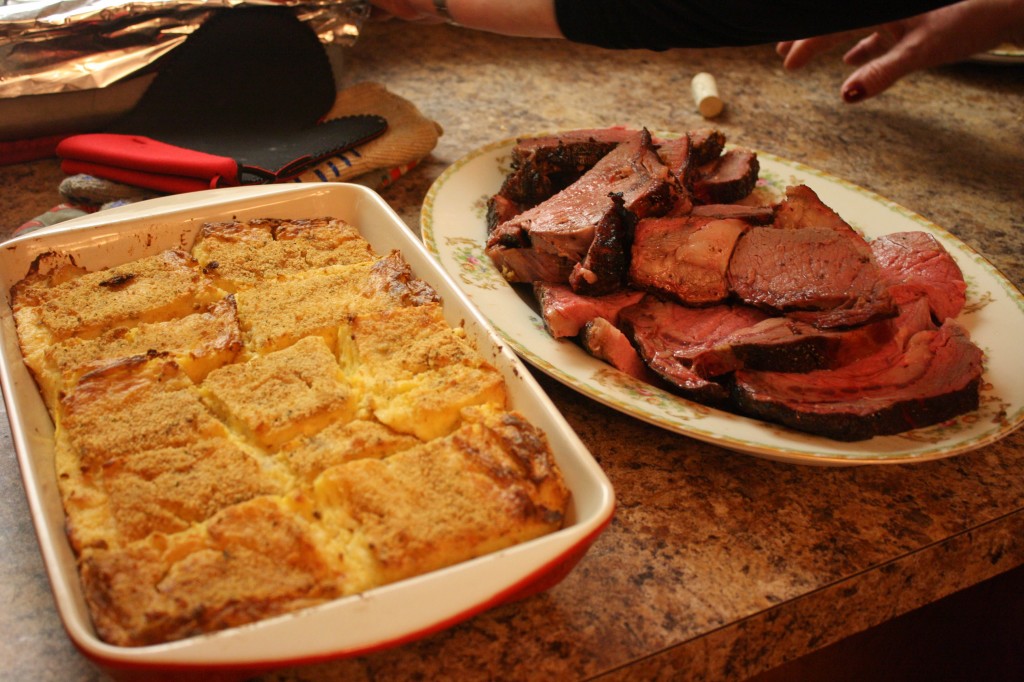 My plate was packed with a little bit of everything: 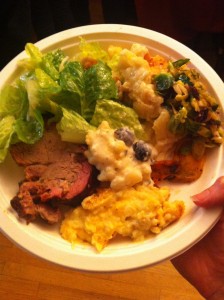 Melt in your mouth soft meat and full of flavor. Of course there was also dessert–my aunt made cupcakes from scratch. The mini cupcakes were vanilla with marshmallow in the center–kind of like a twinkie. She also made some larger once with caramel in the center but I was way too full to even try it. There was a German Chocolate cake and some Christmas cookies, too. As you can imagine, temptation was all around. 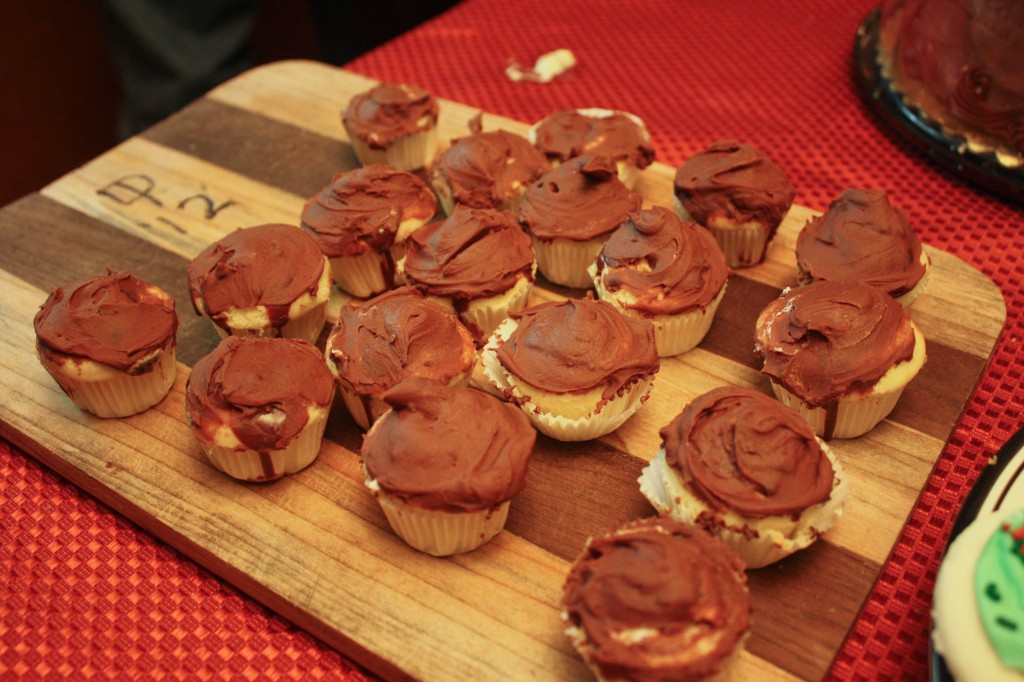 After everyone ate and was in a proper food coma, we did the white elephant gift exchange. My uncle Mike is usually the one that coordinates it but he wasn’t here this year. My cousin Greg did the honors. I brought a super awesome gift–a handmade artsy flask with a cool looking octopus on it. It was very popular and stolen a few times.  My cousin Anna got it (then it was stolen a few times and ended up going home with my uncle). 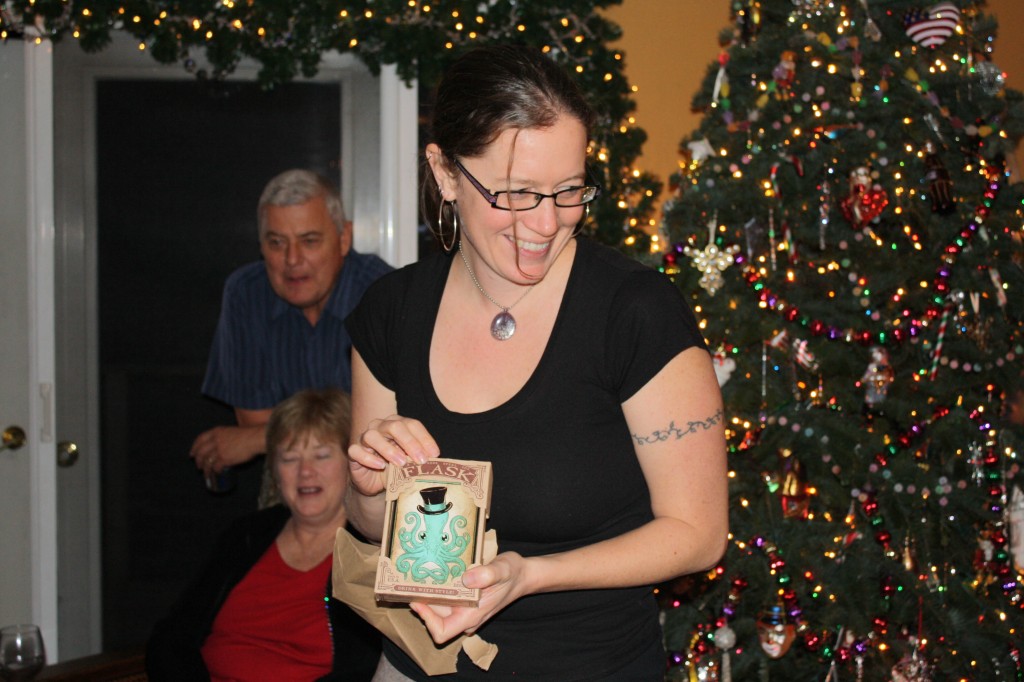 Pretty cool looking, huh? Well my cousin Adam outdid me. The gift Michael picked under the tree ended up being a flask as well. Check it out:

Yes that flask is three times the size of a normal flask AND it’s furry. The outside is made of some kind of animal skin!! It was a pretty funny moment. I was first to pick and got a zombie survival kit–complete with a guide, a Swiss Army knife, a lighter, a mini bottle of whiskey and a box of twinkies. But since I was first I got to pick something else at the very end. I went home with a gift pack of gourmet hot cocoa mix, cookies, a bottle of nice Oregon wine and a jar of Nutella. I’ll be honest, it was the Nutella that made me pick that gift. 🙂

After the gift exchange Michael and I left. We had to get home to let Bella out of her crate and give her the puppy medicine for the night. While we were gone our dog walker came over and let her out, played with her a bit and fed her dinner. It was nice because we were gone so long and I worried about her since she wasn’t feeling well. I’m really grateful that our dog walker lives so close and really loves Bella! I wish we could have stayed longer at the party but, you know how it is! Got to get the kids to bed!  😉