It’s funny, my blog is about weight loss and weight maintenance and the posts that I write now about weight loss get less comments than the ones I post about books or my baby! But maybe it’s not me; I see a lot of blogs these days are getting fewer and fewer comments. I know that there are a handful of blogs that I read and still comment on but that’s gone way down, too. Maybe it’s just the nature of things.

Anyways, I lost another pound this week! I was pretty excited to see the number on the scale – 170. ALMOST to the 160 Land!

When I stepped on the scale I was expecting the worst. I’d had a rough week last week. Some stress and major anxiety about something had me all out of sorts. I definitely turned to food for comfort, kind of like I used to in the “old days.” Stress eating sucks but I was so upset about something (and seriously, I was having panic attacks and breaking out in hives for four days) that I said “fuck it” and ate some junk food to make myself feel better.

So when I decided to weigh myself I was expecting to see a gain, or at least, no change. I was quite surprised to see that I was down another pound. It kinda made me feel a little bit better about life stuff that has me down (a little bit, not much though).

Despite the little stress eating here and there in the last week (and the splurge at Dick’s Burgers), I was actually doing really good with my food.

When I work at home (three days a week), I eat a healthy breakfast — usually eggs and an English muffin — and I do not have any snacks in the morning. The next meal is lunch. This is kind of the opposite of when I work in the office. I usually have a mid-morning snack of fruit or veggies and then an afternoon snack of string cheese or fruit, etc.

Lunches at home are pretty healthy — usually leftovers or salad or a sandwich. Lunches at work right now are a frozen meal. Not the best choice but I have so much CRAP I have to haul to work in order to pump that I just can’t pack much by way of food and it’s easier to do the Lean Cuisine instead. The upside to this is that it’s portion controlled and I know how many calories I’m eating.

Like I said in the last post about weight loss, I’m also limiting my liquid calories to only a few times a week. I drink coffee (it’s a must when you’re waking up at 1 am and 4 am to feed a baby!! and then he wakes us up at 6 am like clockwork!!) but it’s one cup. At work I make 1 cup of black coffee and add some creamer to it (so not a high calorie drink like a mocha or something). At home I walk to the nearby coffeeshop to get my iced coffee, so I’m burning some calories in order to get it. Bonus!

I’m slowly getting back into running! I am slower than molasses–it really doesn’t even qualify as jogging, it’s more like speed walking for a block, then walk, then speed walk then walk and so on. But it’s something and it gets my heart rate up a little bit higher than just walking. Also, when Logan and I go for walks we do a route that is pretty hilly so I burn a little bit more than usual. There are tons of hills in our neighborhood.

Still doing my gym routine and getting back into weightlifting more (and having to increase the weights because they were getting too easy!). 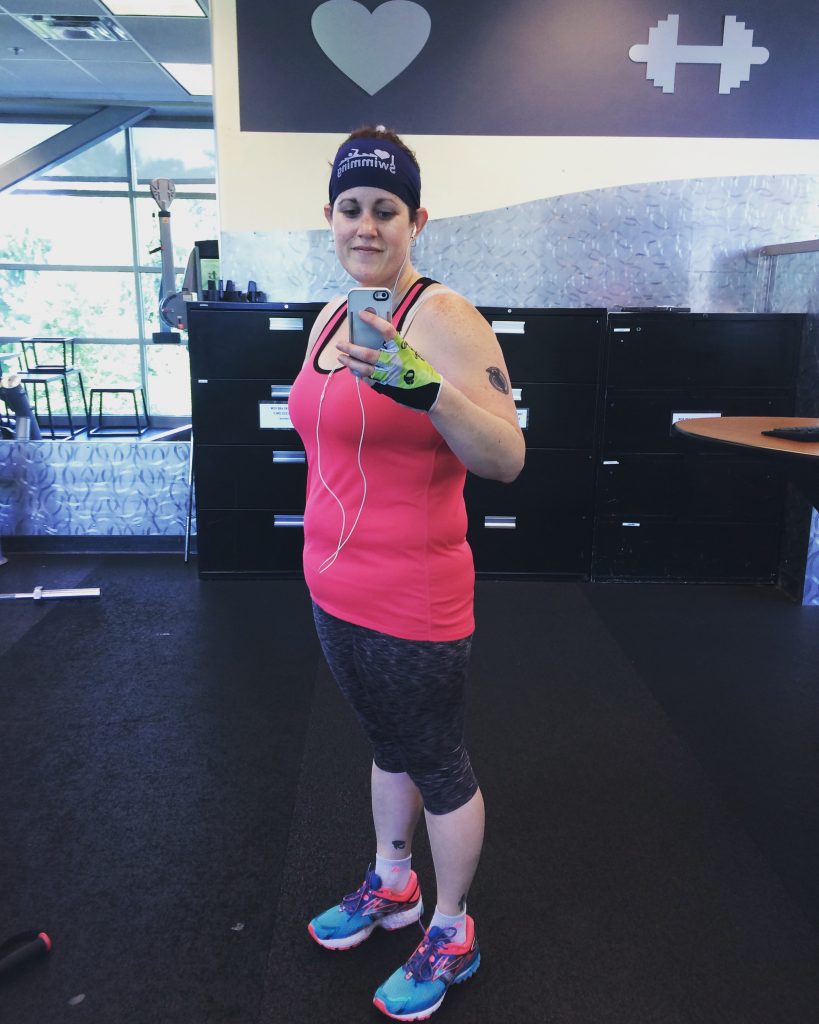 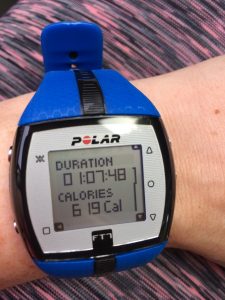 The above was a big calorie burn! It was weight lifting, PT exercises for my back, body weight exercises, and the elliptical.

On the running front, I did not make it to the 5k I signed up for. 🙁 I was bummed about that but it was for the best. I had gone back to running too soon postpartum, I think, and my body just hurt so I stopped and I’ve been doing physical therapy for my back to get back into shape for it. Since I didn’t get any training in for it I decided not to try and run.

Michael was signed up for the race, too, and so he ran it and gave my spot to a friend to run with him.

The last race Michael ran was his first one with me, last summer. When I was about 8 weeks pregnant, no one knew I was pregnant yet, I was recovering from hurting my back and I was suffering from horrible morning sickness! But still I was able to run it with him. Oh well. 🙁

Wow! What a change! I’m so proud of him! I’m sure the 5k was super easy considering he’s now used to running like 7 miles a couple times a week.

I’m really hoping I can participate in the 5k we signed up for next month. Time will tell.

A few weeks ago I decided to suck it up and step on the scale. I needed to see where I was at since I was going to try and really get serious about losing the baby weight. I was surprised to see that I had lost a few pounds and it was a nice surprise and a nice motivator!

At the time I was eating around 1800 calories as a base and if I worked out and burned another 400 calories, I was eating most of those calories back. It really did depend on the day and the baby. If Logan was going through some kind of growth spurt and was cluster feeding or I just felt hungrier than normal, I was listening to my body and eating more.

When I saw that I was losing a little bit of weight, I decided it was time to go down to 1700 calories as a base. It’s only a 100 calorie difference but I thought it was time. I hadn’t been feeling ravenous lately so I figured it was a good time to do it.

My only concern was that reducing my calories too much might effect my milk supply. I didn’t want that to happen, hence the 100 calorie difference. Losing weight would be nice, but not at that cost. In the last two or so weeks since I reduced my base to 1700 I have noticed a little bit of a shift in my supply. I’m hoping it’s not too significant. I’m keeping a very watchful eye on it and if it does reduce too much I might have to back off on trying to lose the weight right now.

Well last week I got on the scale and was happily surprised to see another loss! This time I was down about 1.5 pounds! So for the month of July (and part of June) I lost about 4.5 pounds! That’s a lot! 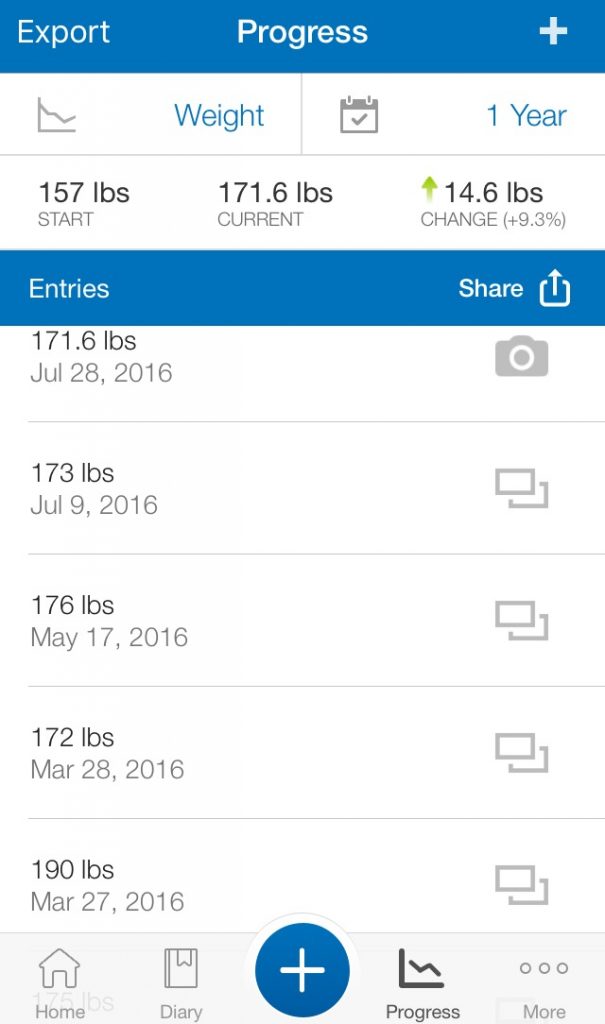 When I got pregnant I was 157 pounds. My goal is to get back to 150 (my original goal weight) so that’s about 20 pounds to go. 14 pounds if I just want to get back to my pre-pregnancy weight.

Seeing the 4.5 pound loss this summer was really encouraging. I was honestly feeling pretty discouraged because I figured I wouldn’t lose the pregnancy weight until I stopped breastfeeding, but something is finally clicking and I’m starting to see some results.

Another motivator is that some of the summer clothes I bought in May (in the bigger size) are a little looser now.

What have I been doing?

Here is an example of one day:

Lunch – Grilled ham and cheese sandwich with a nectarine. Calories: 630 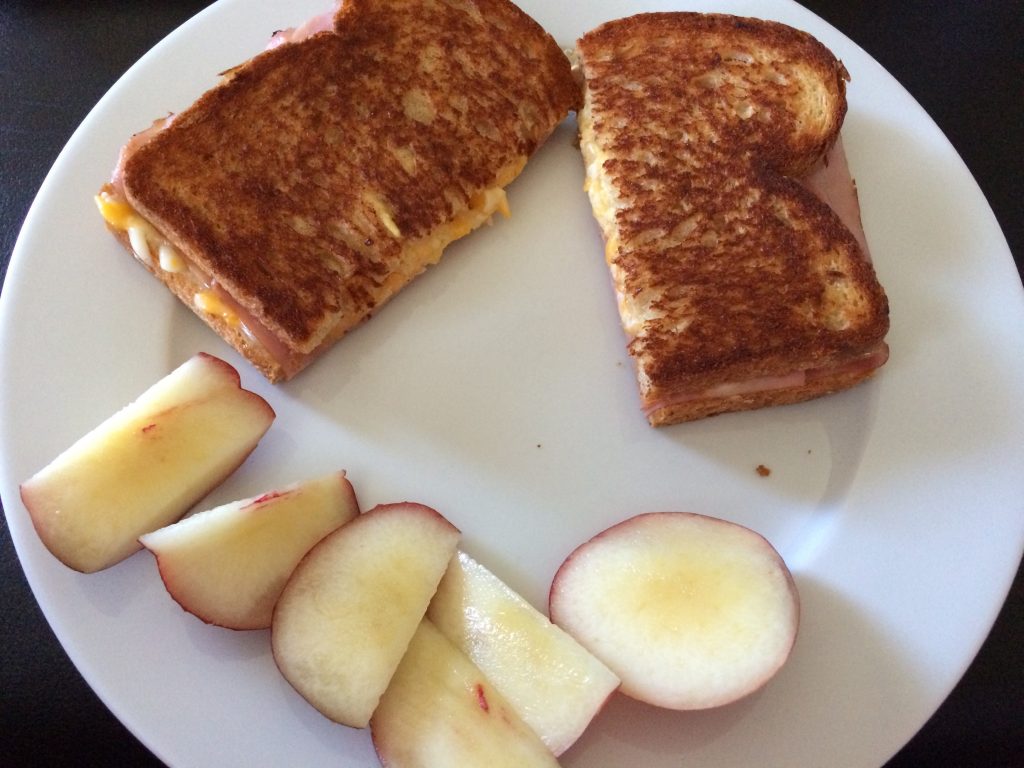 Probably not the healthiest lunch but I’d been craving a grilled cheese sandwich for weeks and I burned a ton of calories on my walk with Logan. 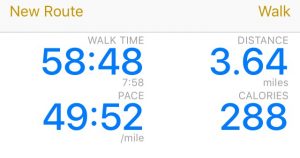 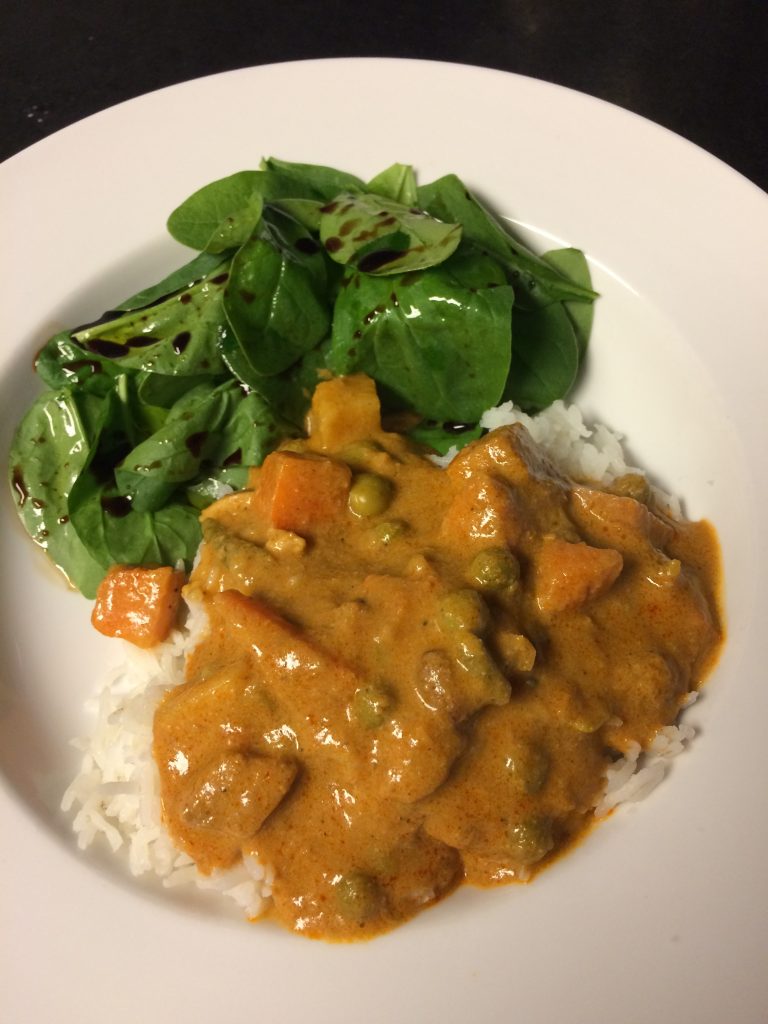 Dessert – Some pieces of chocolate and a glass of milk. Calories: 200.

Total for the day was just under 1900 calories (so 1700+ eating back some of the 607 calories I burned on our long walk). I did have some “liquid calories” (the coffee and a glass of milk) but I still had a bunch of calories leftover for the day.

Most of the time dinners are what Michael and I usually have–a protein and a vegetable. Like steak + sautéed sweet potatoes and onions + steamed broccoli. That’s a pretty good example of what we eat for dinners. Twice a week for breakfast I’m doing the overnight oats, the other days it’s usually eggs and an English Muffin or hash-brown patties (from Trader Joe’s–only 130 calories and so tasty!).

Here is another example of a gym day: 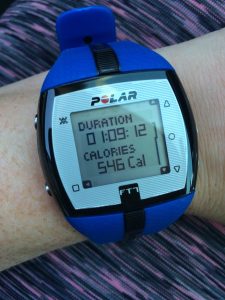 That was weight lifting and the elliptical. As far as fitness goes I’ve got it pretty dialed in. I’m mostly back to what I was doing before I was too pregnant to do things! Being able to physical do the stuff I used to do has also helped with my motivation.

So onward and downward! I hope the scale keeps moving!