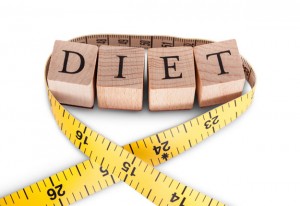 One of the issues I’ve been having with “dieting” lately is feeling deprived. I don’t mean the “I’m denying myself food” kind of deprived. More of the, I’m not eating smart and it’s leaving me feeling unsatisfied and hungry. I wrote about this a little while ago and talked about eating more protein and healthy fats. While I do that most of the time, I find that Monday-Friday I pack my food with calories in mind. I have breakfast at home, then bring a morning snack to work (usually fruit) then I have a low calorie lunch and if it’s a gym day I have an afternoon snack.

This has left me feeling low-energy, cranky, irritable, moody AND HUNGRY. I think Michael got sick of hearing me complain about being hungry all the time so he asked me if I’d be willing to try eating “his diet” for awhile. I said maybe. I feel pretty stuck in my ways, honestly. Eating low calorie foods. I’ve gone back to eating soup or Lean Cuisine type lunches at work that never really stick with me too long. BUT they were portion controlled and I knew how many calories I was eating. Besides, it worked for me 8 years ago, right?!? So why isn’t it working now?

Probably because I’m used to eating more. After I reached goal weight and spent 6.5 years in maintenance mode, I was used to eating a little bit more. I wasn’t trying to lose weight, really. Maybe lose that fluctuation I saw but it was never more than 5 pounds.

Also, my activity level is way different NOW than it was 8 years ago when I first started working out AND of course doing 30 minutes of swimming was going to shock my body into losing a lot of weight because it wasn’t used to activity like that. Now? After 8 years of having a fairly intense workout regiment, my body is used to this. So losing is harder.

It’s not that I was unwilling to give Michael’s ideas a try, it’s really just that I can’t let go of the calorie counting. IT WORKED. For a long time. It’s easy, I know how to do it. It’s become a habit that is part of my normal every day routine. He was asking me to ignore counting calories for awhile while I just focused on eating a high protein, healthy diet of whole foods.

Sounds good in theory right?! But ignoring calories is how I gained 15 pounds on my honeymoon. That and the daily pina coladas and Bloody Mary’s… 😉

Anyways, I decided to give it a try. I was definitely in a food rut so it couldn’t hurt, right? Plus I was tired of feeling tired, hungry, cranky and unsatisfied during the week from a too-low calorie intake. (Which would inevitably lead to me eating crap at work.) 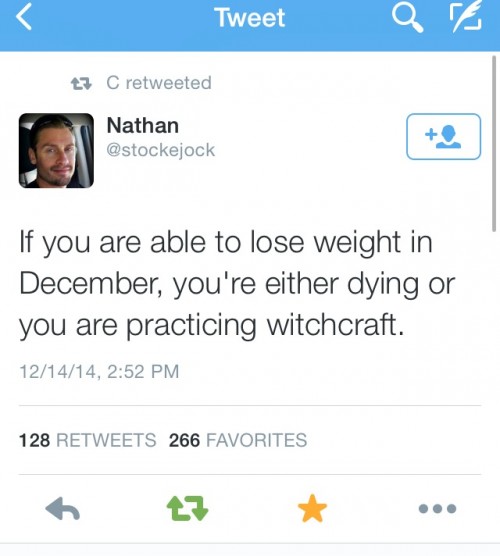 I picked up some ground chicken at the store. It came in a tube, like the breakfast sausages (think Jimmy Dean sausage). It was made of chicken thigh and breast meat and didn’t have a bunch of weird ingredients in it. I cooked it up in a skillet with grapeseed oil and some chopped onions. It cooked up exactly like lean ground turkey meat. The color, consistency and taste was pretty close to turkey, too. 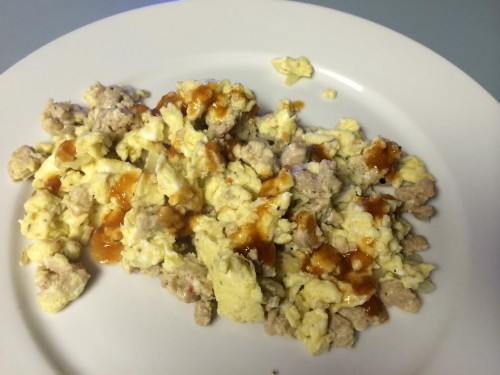 The package of ground chicken had 4 servings in it, each serving 140 calories. I was getting a little more like 5 or 5.5 servings out of what I cooked up. I added some of the ground chicken to two scrambled eggs and topped it with hot sauce. It was a low calorie, high protein and VERY filling breakfast.

CALORIES: 365 total (that number includes my cup of coffee with creamer in it).

So during the week I had two different kinds of lunches: the gym days and non-gym days. Non-gym days didn’t have carbs. An example of a lunch for non-gym days was lettuce with low-calorie dressing and a fillet of blackened salmon. (Salmon blackening below, the ground chicken for breakfasts on the right.) 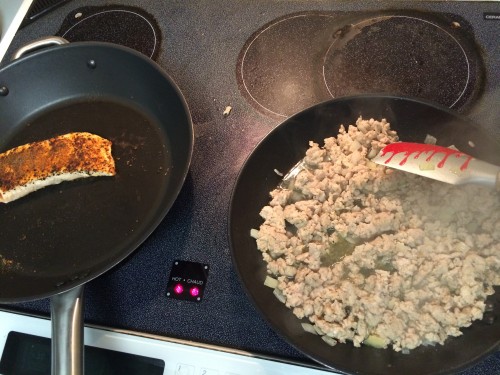 CALORIES: Around 400 calories (for the salad, salmon and dressing).

Gym days: Michael made me this crazy delicious salad for gym days. It was quinoa, chickpeas, kale, carrots and chicken with pesto. Having carbs on gym days was required. This was the second week of food prep: 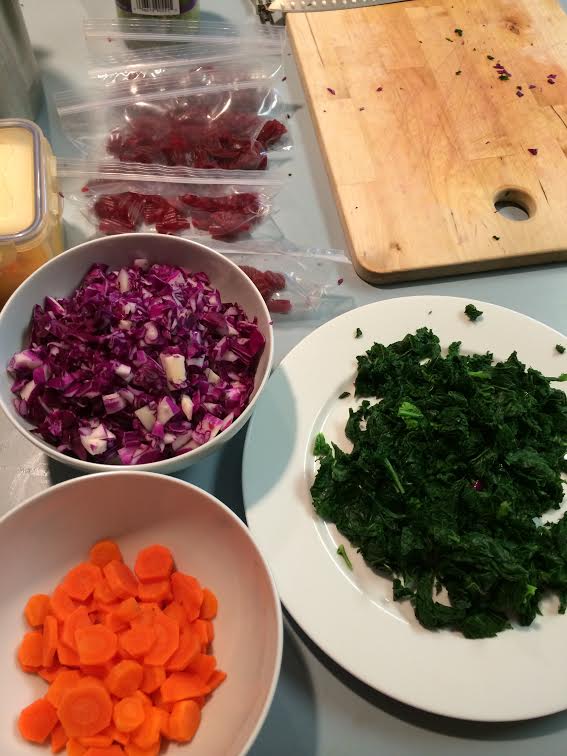 Carrots, blanched kale, chopped red cabbage, chopped pickled beets. The quinoa was cooking, the chicken was baking. The second week Michael skipped the chickpeas and added raw spinach to the salad and I added some raw peppers. It’s a delicious salad!

This hasn’t changed much. A protein and a vegetable.

One dinner Michael made was a burger with a piece of bacon on top of a bed of lettuce with a fried egg on top, topped with some hot sauce. Talk about protein! It was absolutely delicious and filling, despite lacking any carbs. 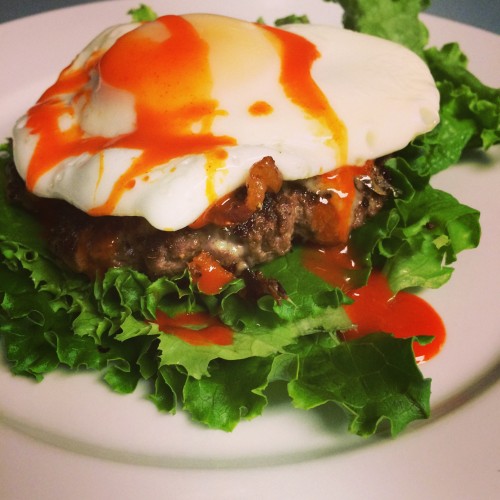 I was still sticking with the fruit for snacks at work. Pre-gym snacks were either pre-packaged servings of hummus from Costco (they are 150 calories) with veggies or plain Greek yogurt with some fruit in it.

This is where I fall short. The sugar. I am trying REALLY hard not to indulge in candy at work and trying to skip the desserts at home. Protein shakes are dessert on gym days. This is also beneficial for days I lift weights. 🙂

I’m on week 2 of this diet, with a few slip-ups due to the holidays and parties. I am trying not to beat myself up over that because for most of the week I was doing well and sticking with it. I was also limiting my sugar successfully! That’s a huge thing for me. Right now I am just trying to get through the next two weeks of holiday foods and festivities and hopefully I’ll start to see some real progress in January.

Anyways, I wanted to share some of the foods I’ve been eating lately because it’s been really delicious and satisfying. So much more so than frozen meals…

First order of business: announcing the giveaway winner! I picked a winner for a copy of Diane’s book, 150 Pounds Gone Forever: How I Lost Half My Size and You Can To. The winner is:

Kathie- email me asap so I can get the book out to you.

Dinners are my favorite meal. I love trying new recipes, and also eating some of the same basic types of meals. It’s comforting to know how many calories my meal will be because dinner is usually a combination of protein + veggie + salad. Dinners change with the seasons. In the summer time, it’s more fresh produce from our garden and there’s lots of grilling involved. In the winter I tend to try out more recipes than in the summer time simply because of the busy factor.

Here is a week’s worth of dinners at home to give you an example of a standard week.

It was the kind of Monday where we were both tired and not in the mood to cook anything complicated. Blackened salmon with steamed broccoli, and a side salad. This is a good standby dinner because we always have salmon in the freezer. 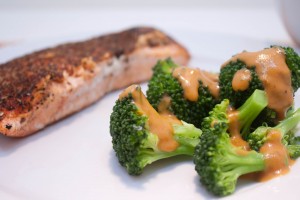 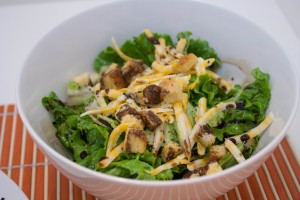 It’s also a good low-calorie dinner. This runs about 500 calories.

I cannot remember the last time Michael and I made burgers out of ground beef. The only time we have ground beef is in a restaurant. Our usual burgers are turkey burgers. But it was such a gorgeous day out that we wanted to grill something. 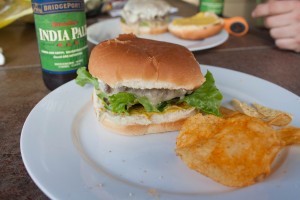 I have to say, there is just something amazing about a ground beef burger from the grill. The flavors were outstanding, from fat of course, but delicious. 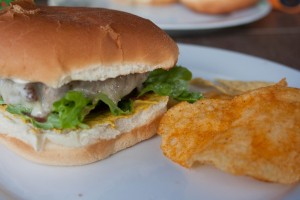 I had a few chips with my dinner and a beer, too.  Michael measured out 4 ounces of meat on the kitchen scale and topped it with a slice of Havarti. Delicious!

This dinner was out of the norm and completely bizarre, but it worked. I got home from the gym and Michael said nothing was defrosted. Ooops! He wanted to get a quickie meal from the grocery store but I suggested shrimp instead. Shrimp defrosts very quickly. 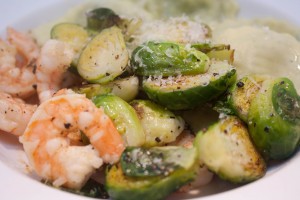 We cooked some spinach raviolis, topped them with the cooked shrimp and then added sauteed Brussels sprouts. 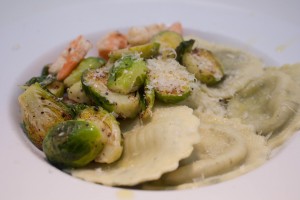 The flavors worked well together and dinner was around 500 calories total.

One of my favorite dinners was on the menu! Fajita salads. Why I love this dinner: it tastes great, it fills me up with the protein in the steak and the fiber in the beans, and I get lots of veggies on my plate.

This time was a little bit different; usually we have Michael’s amazing homemade guacamole with this salad and of course some chips. Doing that adds a ton of calories and make for a gut-bomb kind of dinner where I usually feel like I ate too much. 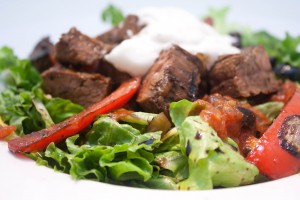 We skipped the chips and guacamole this time and I was pleasantly satisfied.  On the salad was the following: lettuce, black olives, jalapenos, cooked red peppers and onions, steak, salsa as dressing, black beans, steak and sour cream.

Fridays are long days for me. I am usually off to the pool right after work and don’t get home until fairly late. Michael is a sweetie and always has dinner planned and nearly ready when I walk in the door since I’m usually famished. It’s appreciated in so many ways! This time, I got home first. Michael was taking his friend Shoe to the airport so I made dinner for us after swimming. 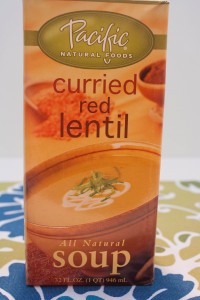 I wanted to use up the red curry lentil soup that had been in the pantry far too long, yet it was only 140 calories a serving. I needed more than that! I decided to use it as a base and sauteed some carrots and onions and added that to the soup. It went together really well but I wished that I’d added chicken or rice to it. Next time. 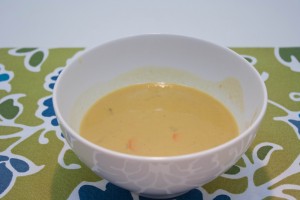 We had the leftover sourdough bread from the night we had grilled cheese as a side with the soup. The soup was really tasty, with a hint of ginger and cinnamon. It was a tad on the sweet side and I bet chicken would really balance that out.

It’s been months since Michael and I did a homemade pizza night! Michael got it started and I helped with the toppings. This time we used pepperoni, black olives, fresh Roma tomatoes and mozzarella cheese. 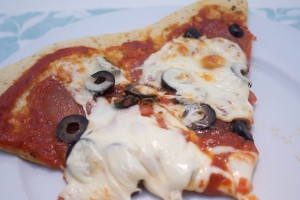 It tasted great and it was nice to have it again after so long.

Pork chop night! I have become a fan of pork chops, even though I thought pork was bland for so long. What changed it? Proper seasoning (thank you Michael) and combining the pork chops with my new favorite veggie: Brussels sprouts. 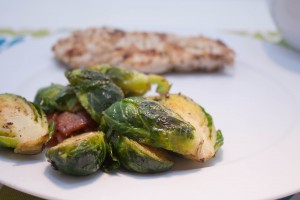 And I admit it, there might have been a teeny bit of bacon in that sautee of sprouts. But in my defense, it was only one slice of bacon. So we each had 4 ounces of boneless pork chops seasoned with steak seasoning from Costco. It’s a good seasoning for most meats–basically just salt and pepper. 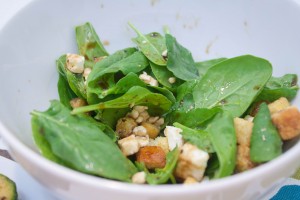 I also had a spinach salad with some croutons, crumbled feta cheese, pepper, olive oil and balsamic vinegar. This has quickly become one of our “staple” dinners because it’s easy and healthy and fairly low in calories.

QUESTION: What are some examples of a typical dinner in your house?