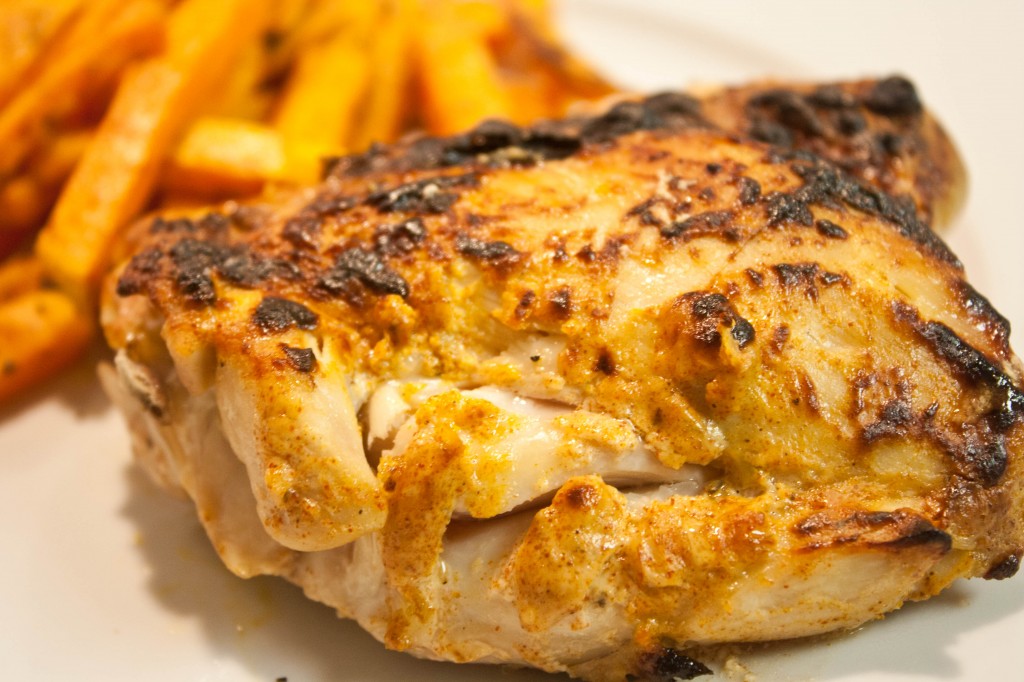 I’ll be honest: Saturday came and I didn’t really want to make homemade pizza. Saturdays are kind of homemade pizza night but I wanted something different. I had some chicken thighs defrosting in the fridge so I decided to find a new chicken recipe to try. 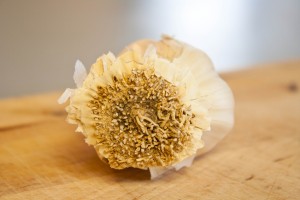 I came across this recipe and it was simple, EatingWell.com’s recipes have been delicious in the past, and I had most of the ingredients on hand. I didn’t have fresh ginger or dried mint. Unfortunately, I could not FIND dried or fresh mint at the grocery store so I skipped it. A Google search said that basil could be a good substitute, so I gave that a try. I wish I had been able to find the mint. 🙁 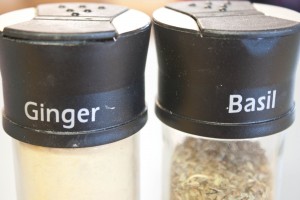 As for the fresh Ginger, I looked online again to see how much to substitute dried ginger and unfortunately, it was not recommended. (Check out this website.) Because of what I read on the website, I didn’t add very much of the dried ginger. I just didn’t want to risk ruining the recipe. 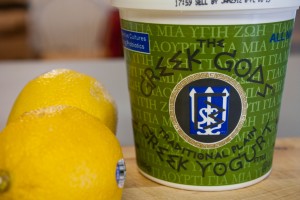 The prep was really easy. I was halving the recipe since it was just the two of us. Instead of 8 chicken thighs, we had 3 (2 small ones, 1 large one). We’d have enough for dinner and leftovers. I removed the skin and fat from the chicken thighs. 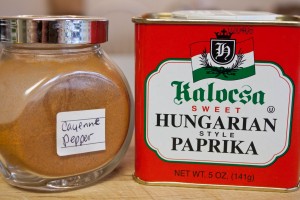 I didn’t have hot paprika so I followed the recipe to create my own “hot paprika” with sweet paprika and cayenne pepper. 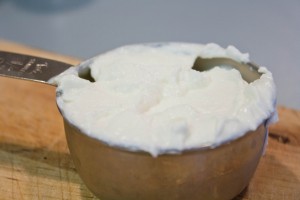 I used plain Greek yogurt and mixed all the ingredients into it and whisked it together. It smelled aromatic and delicious! I was excited that the yogurt mixture was so yummy. 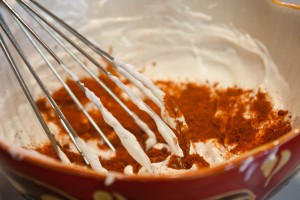 Once the chicken was clean and dried, I poured the freshly squeezed lemon juice on the chicken and then topped it with the spicy yogurt mixture. It went into the fridge to marinade for about 2 hours. Then we got ready to cook! 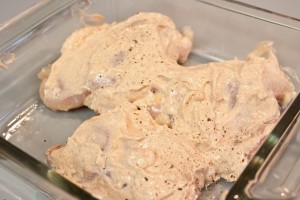 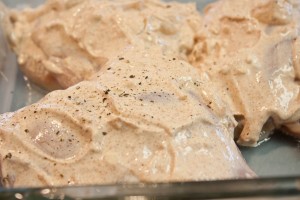 Then came the hard part: the broiler. I am so not skilled in broiling. I’ve thrown more food away that I tried to broil and it failed miserably. I was crossing my fingers that this recipe worked! While the chicken was broiling for 15 minutes, Michael peeled and cut some sweet potatoes to make fries. 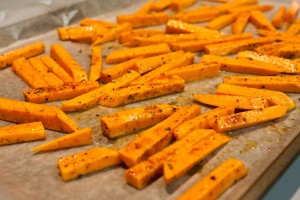 The seasoning used in the sweet potato fries were the same ones I used for the chicken–cayenne and paprika. I figured they were compliment each other nicely. They did end up being really good but the fries were spicier than the chicken, so a little overpowering. The spice wasn’t bad, it just took away some of the flavor that the chicken had. Michael and I agreed that we’d do a different side dish the next time I made this chicken. 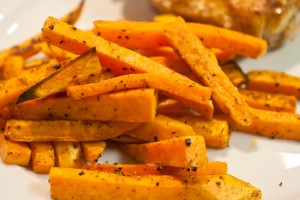 How did the broiling do? It went well, actually! I checked it obsessively every few minutes, but it seemed to be doing okay so I let it ride. I also baked the fries at the same time as the regular baking of the chicken (not the broiling). 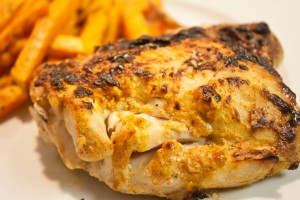 The chicken looks a little crispy, but it wasn’t burned. It was moist and flavorful but like I said, not overly spicy. I’m curious how the dinner would taste differently with fresh ginger and some mint. 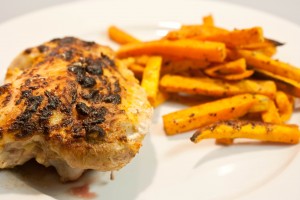 The yogurt sauce had baked off the chicken by the time it was done. I had a glass of a Pinot Grigio to go with the spicy chicken and fries. I’d try the recipe again–next time with a Basmati rice as a side and maybe a cucumber salad. I’d also try and find the fresh mint!

QUESTION: Are you adventurous in your recipe trying? What’s a recipe you want to try but are scared to?

Monday was a much-needed Rest Day for me.  My knee bugged me all weekend so instead of swimming after work, I went home. I started by marinading the steak for dinner: 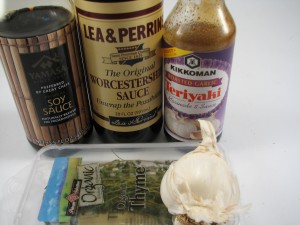 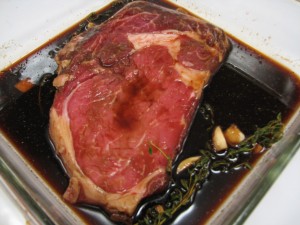 I bought a nice cut of steak: Boneless Rib Eye Steak Lip-on (no idea what that meant). It had nice marbling and it was .57 of a pound. It was a good size for us to share. 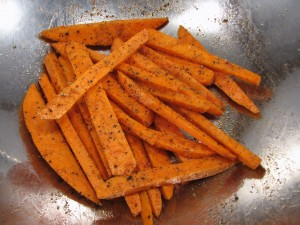 I peeled and cut up one sweet potato to make fries for us to share as well. I also sliced one zucchini to sautee in a skillet. 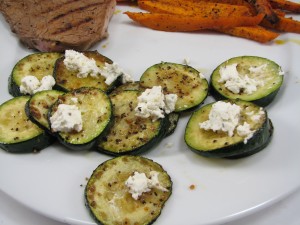 I topped some of the zucchini with a tiny bit of herbed goat cheese. The components were all delicious but putting them all together they were WAY salty. I don’t know why because we didn’t really add any salt to any of it. 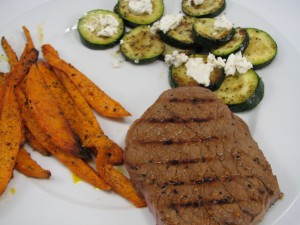 I photographed Michael’s plate instead of mine because the steak sort of got mangled a bit when we were diving it up. So imagine about half of that size of the steak as mine. 🙂

I’m cleaning out my closet! I have a running skirt that I bought last Spring but never wore (boo). I took the label off, washed it, and then forgot all about it in the back of my closet for a year. Now? It’s too big and instead of just tossing it, I want to give it away! 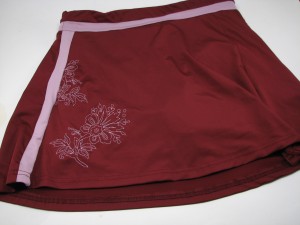 Like I said, it’s never been worn and it’s just begging someone to use it. Here are the details: 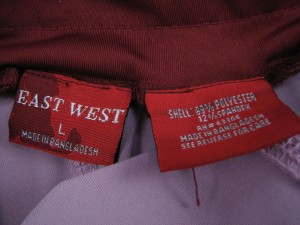 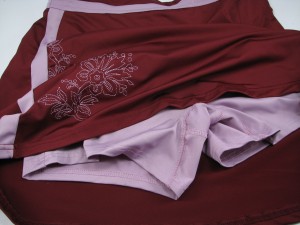 It has little shorts underneath the skirt. 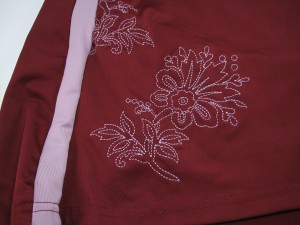 3. Leave a comment on this post asking me what YOU would like to see more of on my blog! Ask me anything and I’ll address it!

Open to USA addresses only, thanks! I will pick one winner on Friday April 29th!