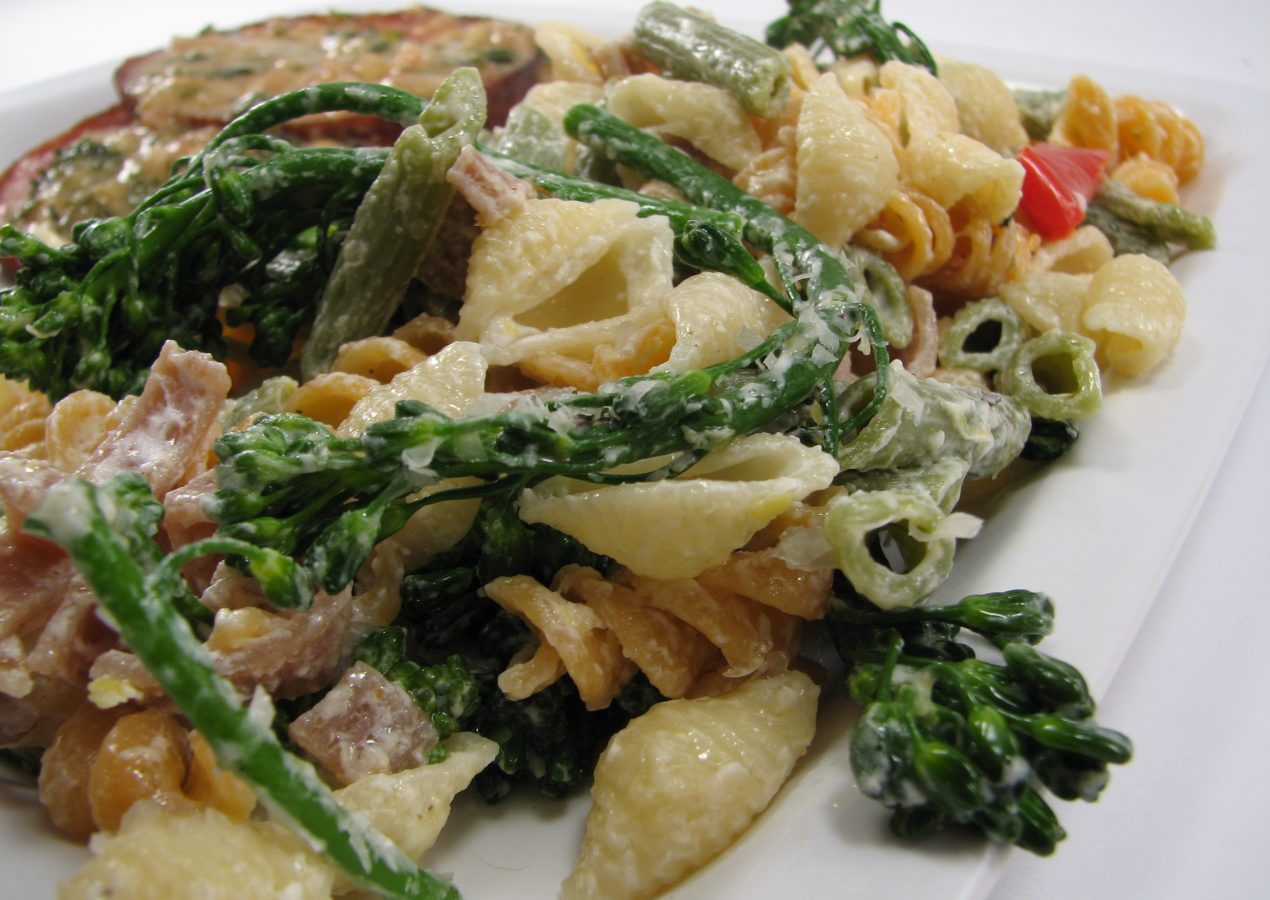 Here is the continuation of Michael’s 36th Birthday Four Course Meal. Part One can be read here. It feels like an Academy Award speech! First, Happy Birthday Michael! Second, thank you Andy for your help!

It was important to me to try some new recipes and also be able to time everything right. I really appreciate all the help my brother gave me planning this meal.

Do you know how hard it was to track down “Pickled Goat Horn Peppers?” I was at a loss–Googling it, asking every foodie I know for a suggestion on what it was and where to find it–to no avail. Then I asked my friend Star. She asked HER friend who happens to be a chef at Gino’s in Sellwood. He knew exactly what it was and where to find it: New Seasons! I stopped by it and after much searching I found the Pickled Goat Horn Peppers! Score!

The pasta dish was really simple and luckily I timed everything correctly. I blanched the broccolini and once the pasta was cooked I mixed in all the ingredients. The ham was heating in the oven and it was almost ready as well. I started making the Madeira Sauce. I’d never used a shallot before so that was a new experience for me.

from my Brother Andy

Set skillet over medium-low heat; add shallot and cook, stirring constantly, until softened, about 1 minute. Add Madeira; increase heat to high. Simmer until liquid is reduced to about 1/3 cup, 6 to 8 minutes. Off heat, whisk in parsley, thyme, mustard, lemon juice, and butter until butter has melted and sauce is slightly thickened.  Season with salt and pepper to taste.

The third course (the main course) was perfect. Everything was delicious and flavorful. I was so happy they had turned out after the fail of a soup.

The Madeira sauce went perfectly with the ham. The shallots and mustard were mild but complimented the ham very well. The pasta dish was good. The Goat Horn Peppers were a spicy surprise in the dish that was unexpected but amusing. I didn’t get enough goat cheese (note: pay attention to recipes when buying ingredients!) but the pasta wasn’t lacking anything as a result.

The Pinot Noir was a lucky buy too. It was mild for a Pinot Noir and did not overpower any of the flavors in the main dish. I was so happy I had selected the right wine.

I will definitely be making this pasta and ham dish again!

Michael loved the dish too, so that made me happy. I redeemed myself after the soup! He opened some more presents and we chatted and laughed over our wine. I had one glass of the Pinot.

Michael was surprised about the “dessert” course. There was no chocolate! I thought this was a different thing for us to experience and he enjoyed it as the last course. He loves cheese.

The Stilton was powerful. I thought that one would be Michael’s favorite because he likes blue cheese so much but he said he preferred it on salads. The other two cheeses I bought were a major hit though. The smooth, creamy textures and the mild flavors were outstanding. The toasted walnuts were a great combination with the cheese.

I’m not a fan of dessert wines as a general rule. The Port was STRONG. Not only was 18% alcohol it was decadently sweet. Holy Moly. But surprisingly the Port went really well with the nutty and cheesy flavors! I had half a serving of the Port wine because it was just so strong. And it all hit me at the end of the meal. Check back later for the “outtakes.” Haha!

QUESTION: Have you ever attempted something complicated and involved like this? Would you?