The next day of their visit Michael had the day off so we got to spend some time together. First order of business: exploring a beer and wine market I’d been wanting to check out: John’s Marketplace. It’s in Multnomah Village, which is a cute little part of SW Portland. I actually used to live there long, long ago and loved my little apartment not too far from John’s Marketplace.

I knew Andy would love to check it out. He’s kind of a wine and beer expert and their selection was supposed to be the best in Portland–and it was! The place was huge. They had a large wine selection but honestly the beer was the star of the show. 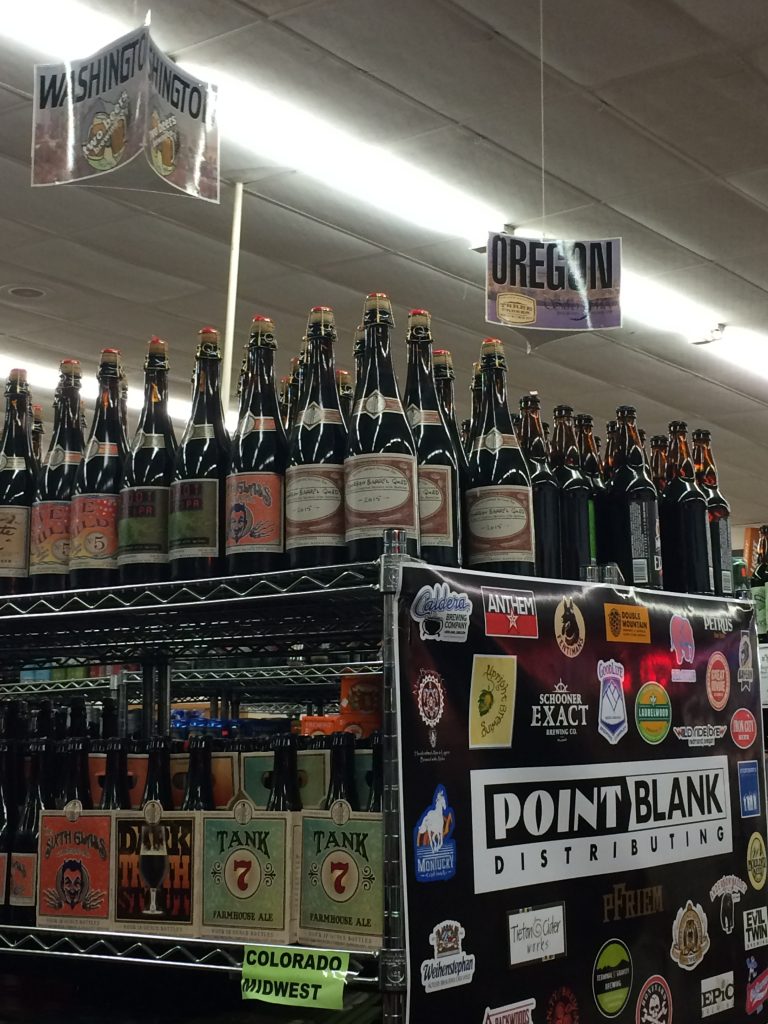 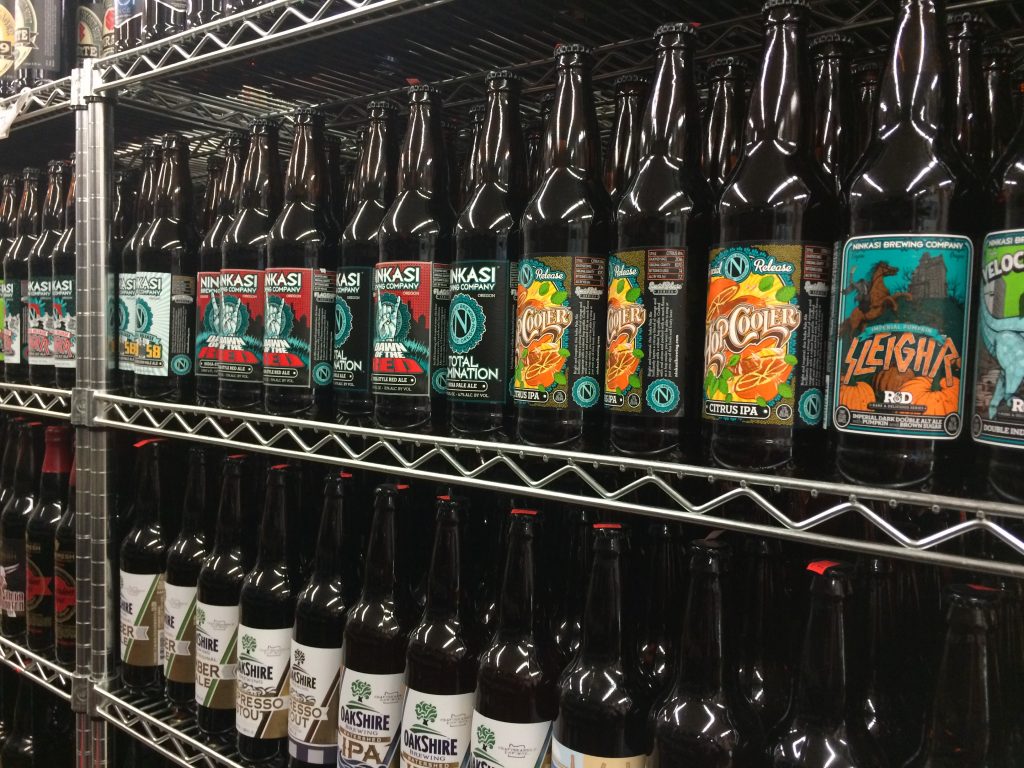 I saw so many beers that looked intriguing. I got a nice selection of some that I was familiar with and a few that were new to me, too. Our stash:

And then I decided to try these two, which sounded interesting to me. Next hot sunny day I’m giving these a try: 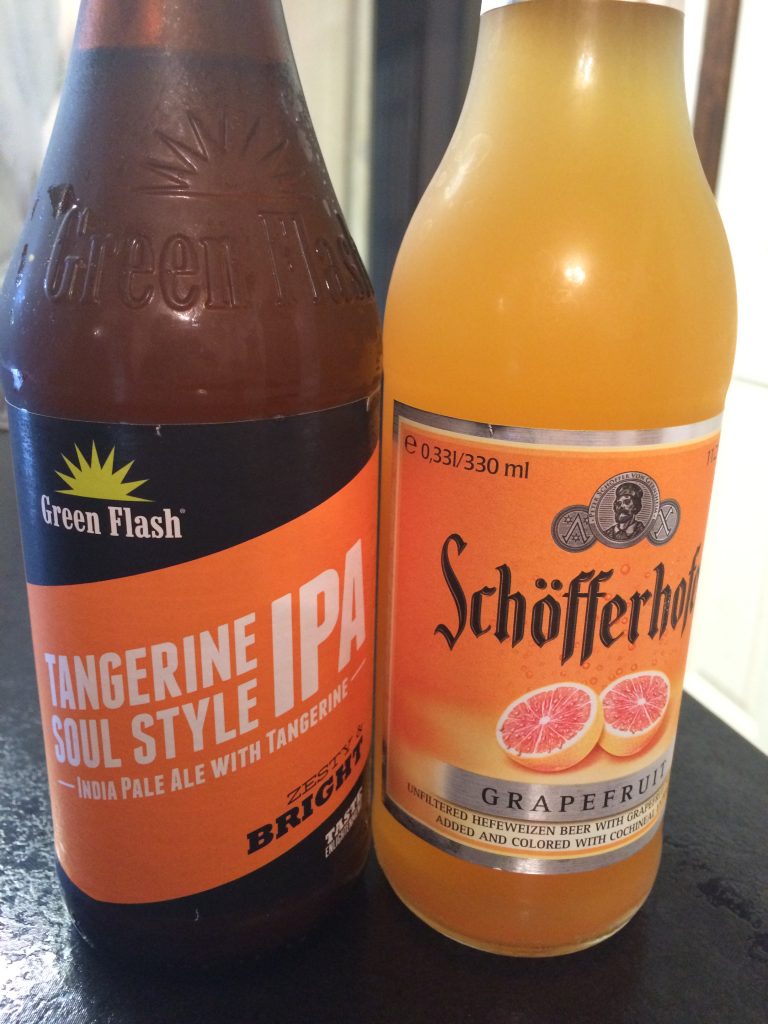 Logan did great (and slept through the whole trip). 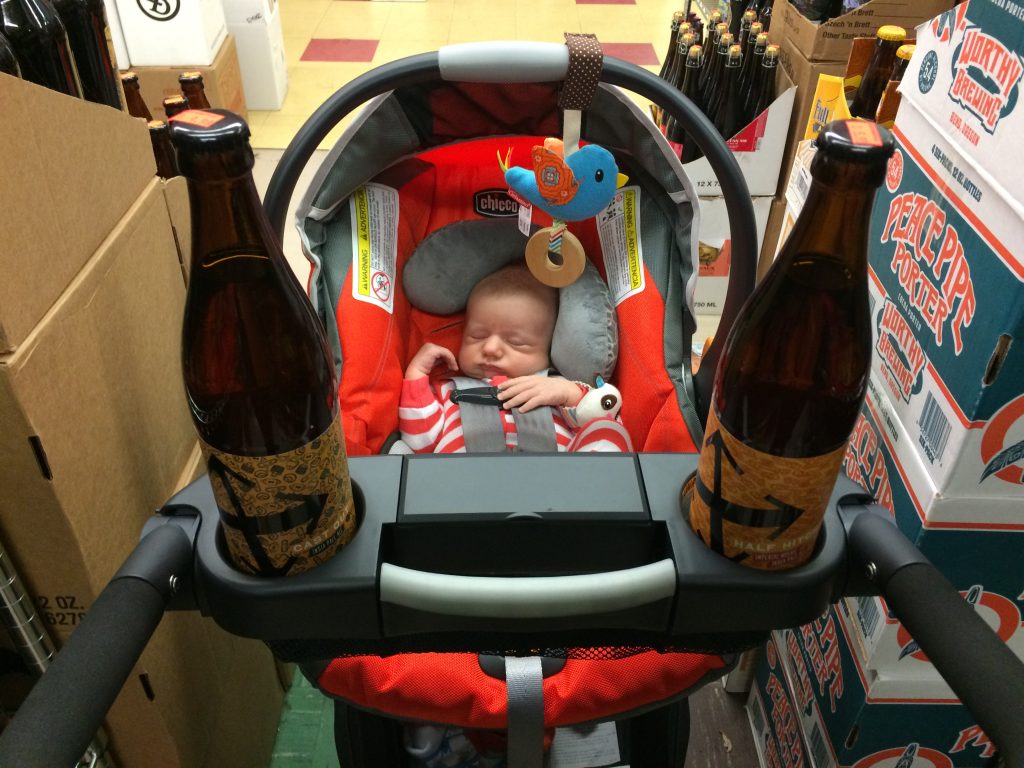 We got our selections and then went back home just in time for my parents to arrive! They had been in Arizona for a few months (my dad became a snow bird in retirement) and were driving home to Seattle so it was the perfect pit stop for them and a nice treat for us. It was the first time we’d all been together at the same time since my wedding. Wish my brother lived closer!

We all went out to lunch at Iron Horse Mexican restaurant in Sellwood and once again Logan did surprisingly well…for most of it. I was able to eat all of my food though before he got fussy. I got the Yucatan taco with rice and beans (it was pork with coleslaw and pineapple salsa). It was delicious and just the right amount of food for lunch. 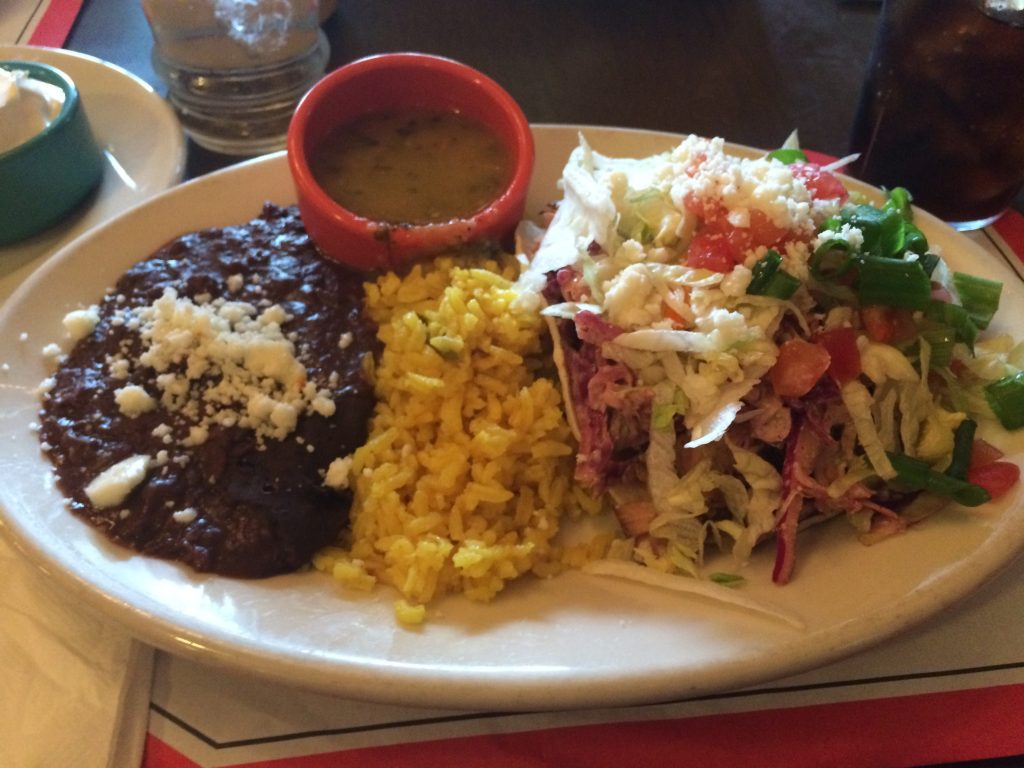 Anyways, just as I finished eating Logan got fussy. I got to change his diaper in the ladies room on the changing table for the first time, so there’s that. New experience! And of course just as I took his diaper off and was about to put a new one on Logan peed on everything. And I mean everything. Thankfully I had a change of clothes in his diaper bag (good thinking on my part). So I cleaned all that up and him, changed his clothes and then he puked on his new outfit and my sweater. Ah the experiences you get to have as a new parent. 🙂

But it was all good, just more laundry when we got home. We got to spend some time at home with the family before my parents left for home. 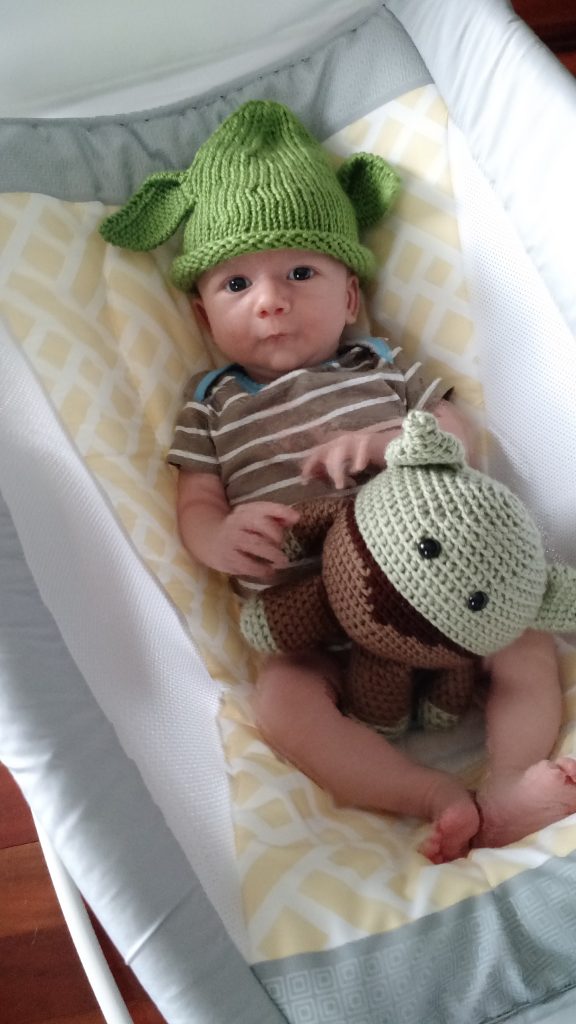 Logan got these really cute Star Wars toys from his aunt and uncle. 🙂 Even though I’m not a fan I can admit they are cute stuffed animals. And handmade from an etsy store. So cute!

And then Andy started cooking us dinner again. We sure got spoiled this trip! This time it was one of Andy’s famous pasta dishes. He made the sauce from scratch–tomatoes, sauteed onions and sausage, garlic and artichoke hearts. 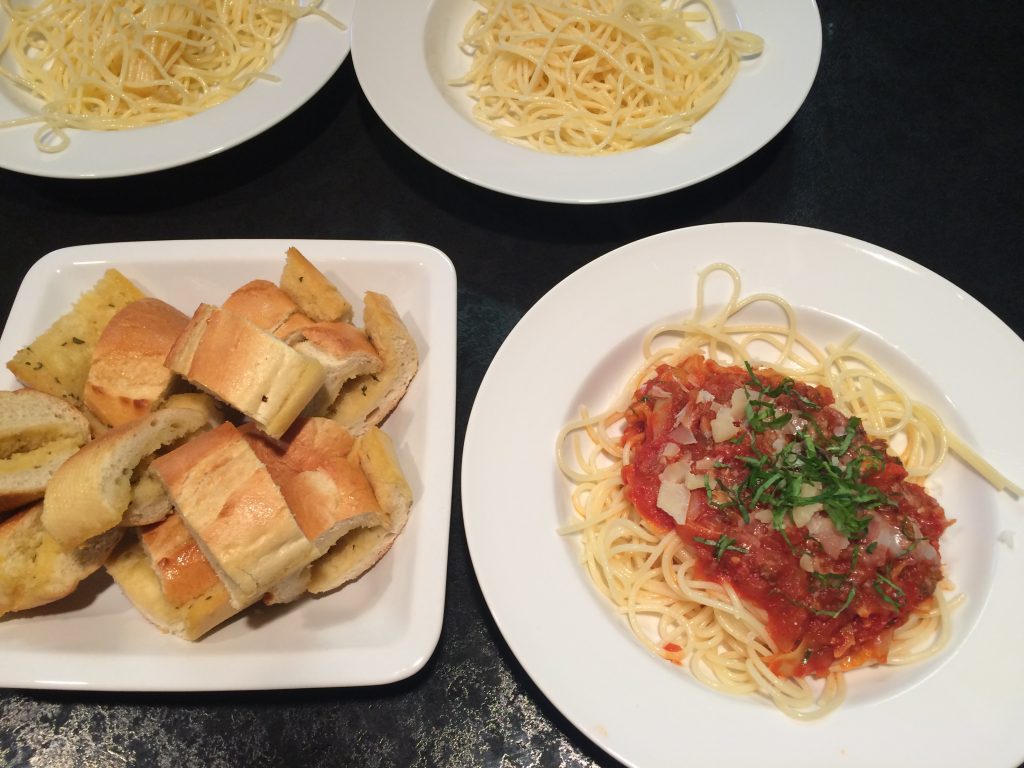 Dinner was absolutely delicious! It was spicy and tasty and I loved the addition of the artichoke hearts to the sauce. He topped it with fresh parmesan and basil. We drank a bottle of wine with dinner and then splurged for dessert: 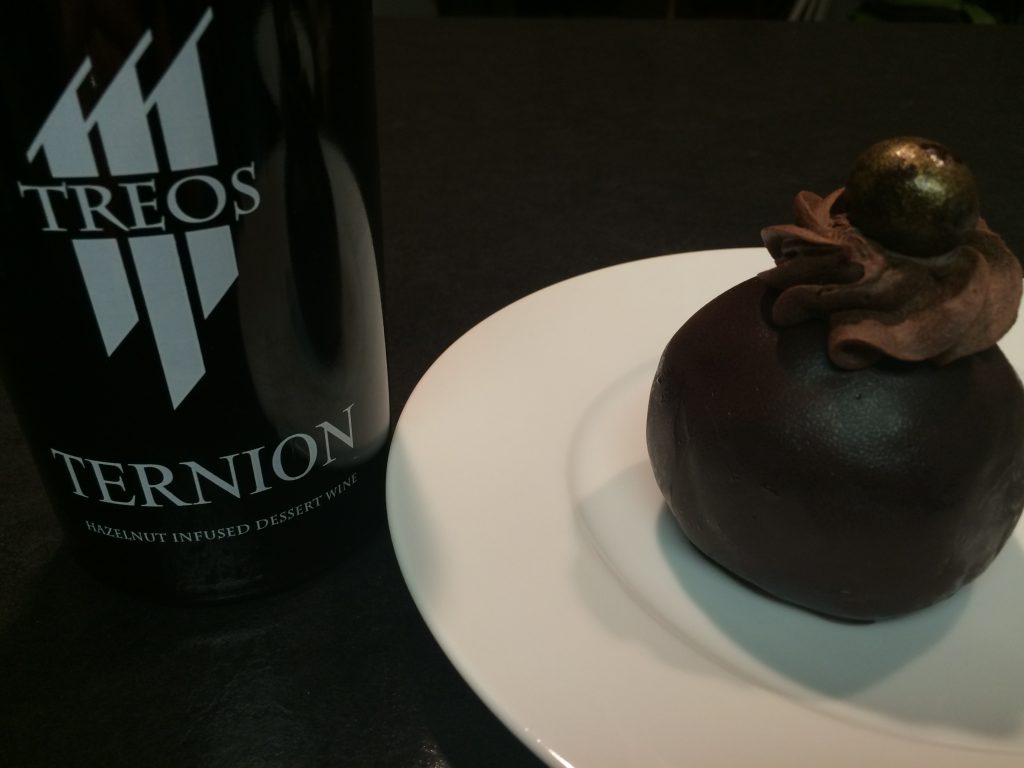 The Bourbon Ball from Papa Haydn’s and a little bit of the dessert wine they brought from home–it was a hazelnut Port. I’m not really a fan of dessert wines, they are way too sweet for me, but I had a taste of this one and it was actually quite good and I liked it a lot. It went nicely with dessert.

The next day we had breakfast together and then dropped them off at the train station for the last leg of their west coast trip–off to Seattle then back home to Philly. It was bittersweet saying goodbye. I hate that they live so far away and we don’t get to see each other very often. I also hate that visits are always so short, but I get it. It’s hard to see everyone on one trip. But it was a nice visit and I’m so happy they were able to spend some time with us and meet Logan. They come back next summer for a wedding and they’ll get to see Logan again and he’ll be a big boy! I’m already looking forward to it.

After we dropped them off it was back home and I went to the gym. It felt good to be back at it after a few days off. And it was a good distraction from feeling a little sad.

Here is the continuation of Michael’s 36th Birthday Four Course Meal. Part One can be read here. It feels like an Academy Award speech! First, Happy Birthday Michael! Second, thank you Andy for your help! 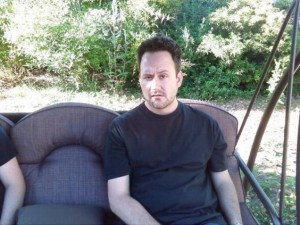 It was important to me to try some new recipes and also be able to time everything right. I really appreciate all the help my brother gave me planning this meal. 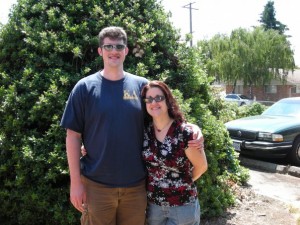 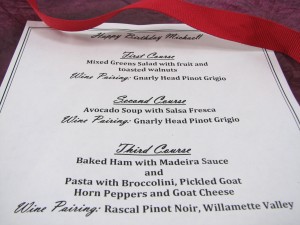 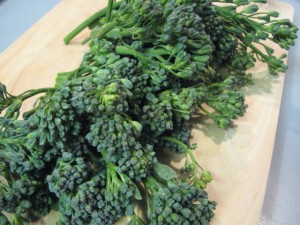 Do you know how hard it was to track down “Pickled Goat Horn Peppers?” I was at a loss–Googling it, asking every foodie I know for a suggestion on what it was and where to find it–to no avail. Then I asked my friend Star. She asked HER friend who happens to be a chef at Gino’s in Sellwood. He knew exactly what it was and where to find it: New Seasons! I stopped by it and after much searching I found the Pickled Goat Horn Peppers! Score! 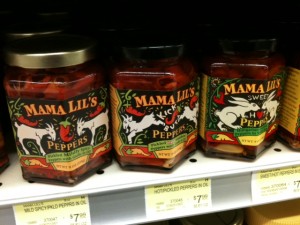 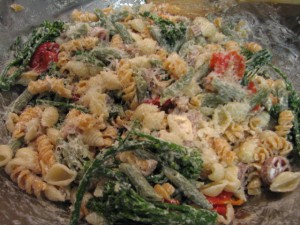 The pasta dish was really simple and luckily I timed everything correctly. I blanched the broccolini and once the pasta was cooked I mixed in all the ingredients. The ham was heating in the oven and it was almost ready as well. I started making the Madeira Sauce. I’d never used a shallot before so that was a new experience for me.

from my Brother Andy

Set skillet over medium-low heat; add shallot and cook, stirring constantly, until softened, about 1 minute. Add Madeira; increase heat to high. Simmer until liquid is reduced to about 1/3 cup, 6 to 8 minutes. Off heat, whisk in parsley, thyme, mustard, lemon juice, and butter until butter has melted and sauce is slightly thickened.  Season with salt and pepper to taste. 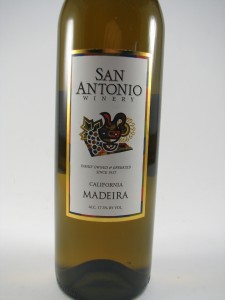 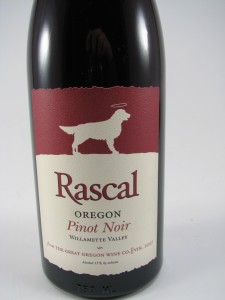 The third course (the main course) was perfect. Everything was delicious and flavorful. I was so happy they had turned out after the fail of a soup. 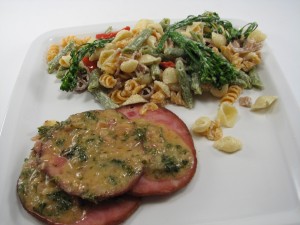 The Madeira sauce went perfectly with the ham. The shallots and mustard were mild but complimented the ham very well. The pasta dish was good. The Goat Horn Peppers were a spicy surprise in the dish that was unexpected but amusing. I didn’t get enough goat cheese (note: pay attention to recipes when buying ingredients!) but the pasta wasn’t lacking anything as a result. 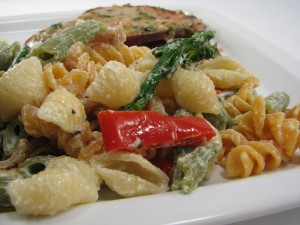 The Pinot Noir was a lucky buy too. It was mild for a Pinot Noir and did not overpower any of the flavors in the main dish. I was so happy I had selected the right wine. 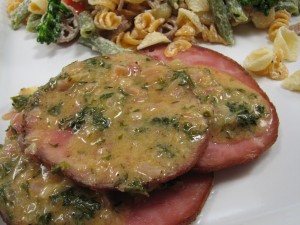 I will definitely be making this pasta and ham dish again! 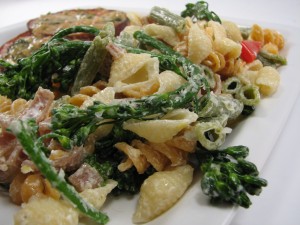 Michael loved the dish too, so that made me happy. I redeemed myself after the soup! He opened some more presents and we chatted and laughed over our wine. I had one glass of the Pinot. 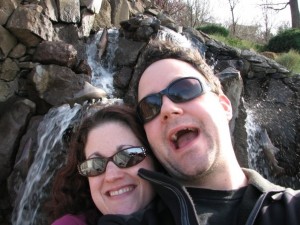 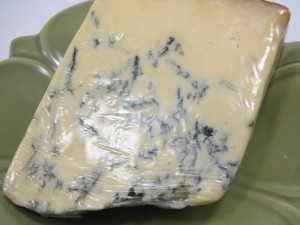 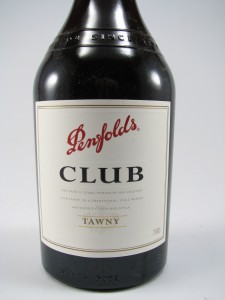 Michael was surprised about the “dessert” course. There was no chocolate! I thought this was a different thing for us to experience and he enjoyed it as the last course. He loves cheese. 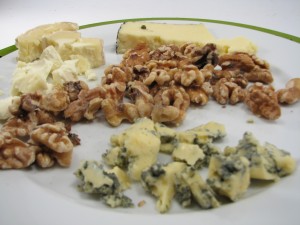 The Stilton was powerful. I thought that one would be Michael’s favorite because he likes blue cheese so much but he said he preferred it on salads. The other two cheeses I bought were a major hit though. The smooth, creamy textures and the mild flavors were outstanding. The toasted walnuts were a great combination with the cheese. 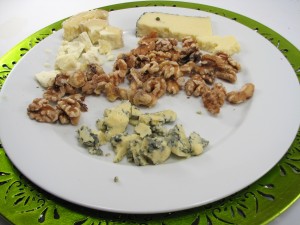 I’m not a fan of dessert wines as a general rule. The Port was STRONG. Not only was 18% alcohol it was decadently sweet. Holy Moly. But surprisingly the Port went really well with the nutty and cheesy flavors! I had half a serving of the Port wine because it was just so strong. And it all hit me at the end of the meal. Check back later for the “outtakes.” Haha! 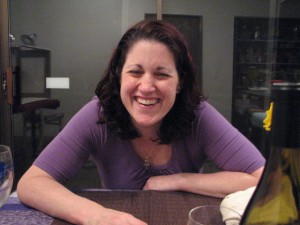 QUESTION: Have you ever attempted something complicated and involved like this? Would you?