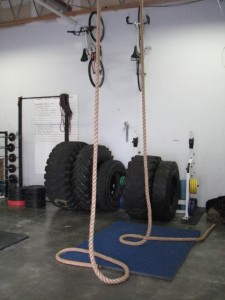 I finally got to try out my old trainer’s gym. Christian is an amazing personal trainer. I bought sessions with him probably a dozen times over the years and every single time he kicked my butt–in a great way. I remember the awesome workouts followed by about four days of being crippled. It was worth it! He’s a very positive, encouraging person and I feel like he has my best interests in mind when works me. It was a million times better than that awful personal training session I had at 24Hr Fitness. 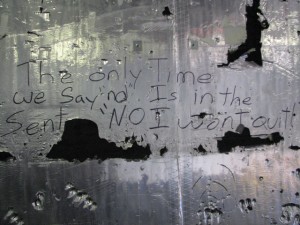 I set my alarm early on Saturday morning, ate a Bagel Thin and some Kashi Puffs cereal and drove out near the airport where his gym was. 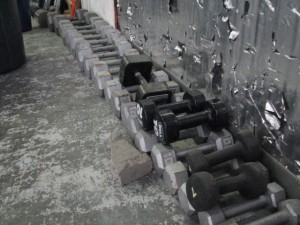 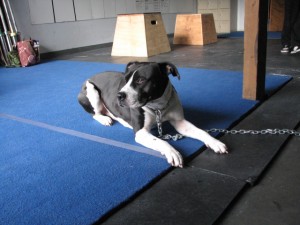 It was a big space with lots of equipment. He’s doing a great job collecting props for any kind of workout you can imagine. There were big white boards on one wall with all the different workout routines. There were bars all over the place for things like pull-ups or stretching. Christian told me about a Crossfit competition he was preparing for and lifted (I think) 75 pounds? 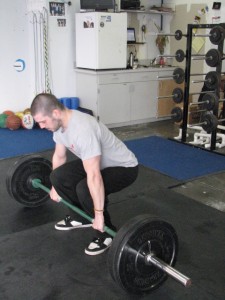 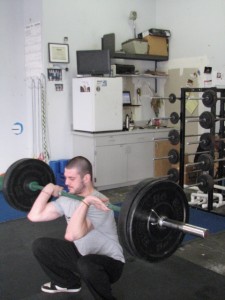 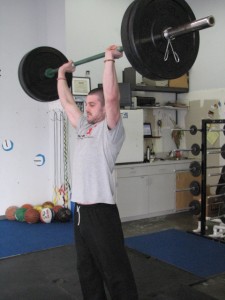 I’m pretty sure I would struggle just doing that with the BAR! Another couple arrived for the 9am class and Christian’s cousin was also there helping him out. First up was some stretching. Then we did a warm up to start: 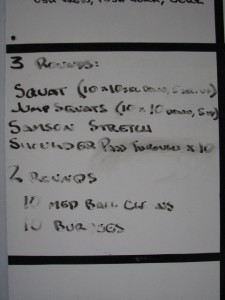 3 rounds of the above was the warm up. 10 Squats (holding the squat position for 10 seconds, then standing up for 5 seconds, repeat). 10 Jump Squats. Then the Samson Stretch and Shoulders. Followed by 10 medicine ball squats and then 10 burpees. Repeat 3 times. THIS is the warm-up?! Holy moly! My legs felt like jello by the time I was done with the warm up. 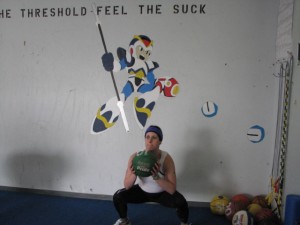 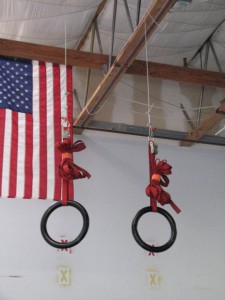 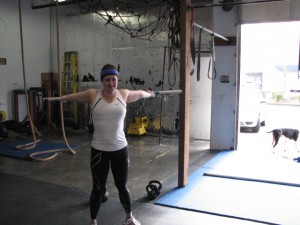 The above photo was the shoulder stretches with a PVC pipe. It was great! It really stretched things out and I felt a bit looser after that. Everyone went at their own pace. The other two people did some modified exercises according to their skill level and injuries they had. Christian then described and demonstrated what the actual workout would be. 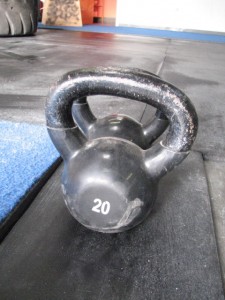 Of course once I got home I realized I forgot to take a photo of the workout. I’ll try to recount it the best I can from memory. First was a 400m run (twice around the building). 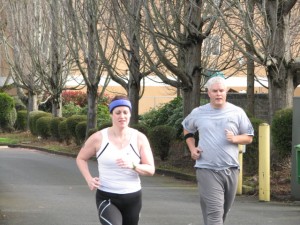 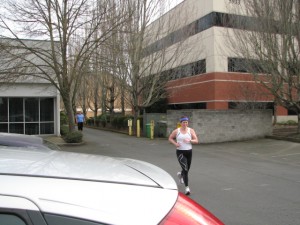 I felt good running. It was a good warm up. Once I finished that and was back in the gym I did the pull-ups with a stretchy cord as an assist. WOW. I did pull-ups! For REAL! 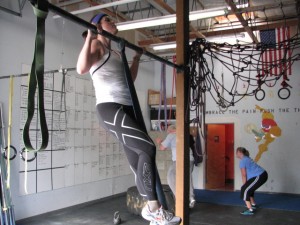 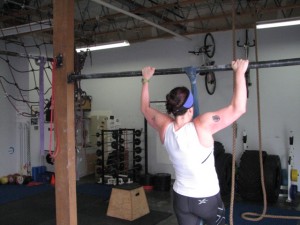 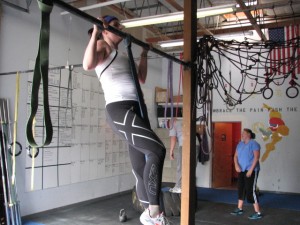 It was HARD. I could do about 7 or 8, then I had to rest a moment before I could do the rest. I did 15 total and then moved on to the next part: Jumping up onto the big tire and then back down. 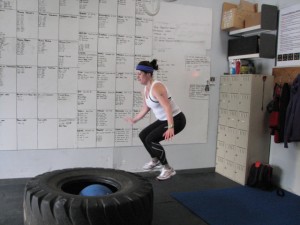 Haha that picture is really funny of me jumping onto the tire. 15! Towards the end of the workout I would do 5 jumping and then the other 10 stepping up and then down. I modified it because I was worried about the jumping and my knee. 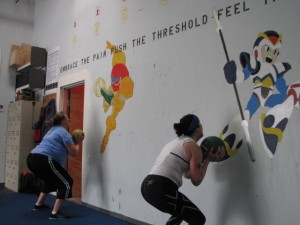 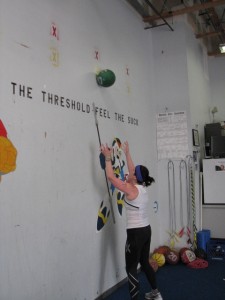 Next was throwing a 10 pound medicine ball up on the wall, catching it and squatting. Ouch. The yellow “X” is where the girls aimed for, and red “X” above it was for the men. I could do about 3 or 4 before I had to rest a moment. It was hard to do 15. Then I did the Kettle Bells (15 pounds). Swinging them 15 times. 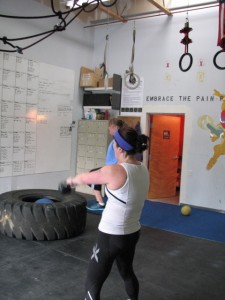 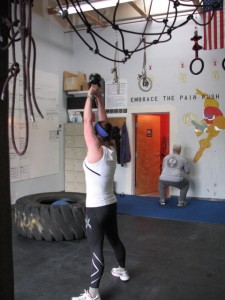 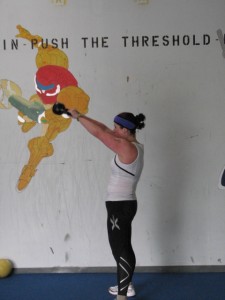 I LOVED the Kettle Bell workout. It was a lot of fun, I really felt like I could do it without much coordination or skill, and it was easy to do 15 of them. I suppose I should have tried the 20 pound Kettle Bell instead of the 15 to see if it was harder but I didn’t want to overdo it too much. 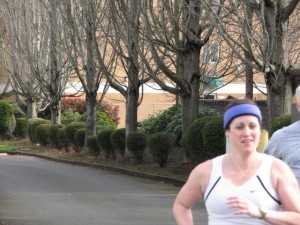 Repeat! Back out to run 400m and do the WHOLE THING AGAIN. 3 more times in fact. A total of four times through the workout. 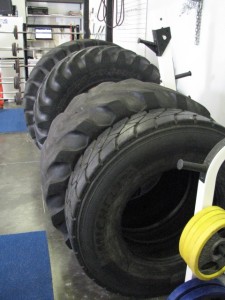 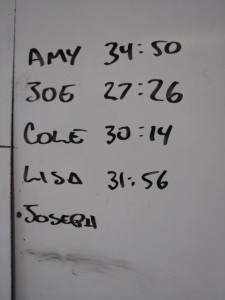 My legs were very jello-like by the time I was done with the four sets. I had most definitely worked up a good sweat. It’s funny because I originally thought I’d go for a run after my Crossfit workout. There was no way I needed to. I got in a fantastic workout with Christian. 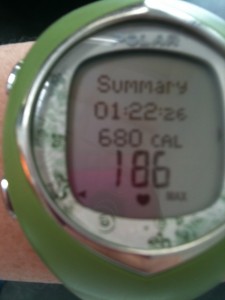 The workout ended with more stretching and then I used the Foam Roller and a Lacrosse Ball on pressure points. It worked wonders. I had such a fantastic time at Christian’s gym. It was a killer workout and I definitely got my time’s worth. It makes me a little sad to go back to my crappy (but paid for) gym. SIGH. I do plan on dropping in to Christian’s gym maybe once a month to get in a good sweat. 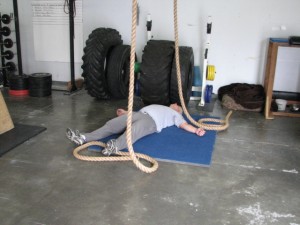 I got home and made myself some Navy Bean and Ham soup for lunch (lots of protein) and I’ve been sucking down gallons of water to prevent soreness tomorrow. But I must say it’s been a few hours now and I’m already hobbling a bit. It hurt so good at that gym! Any Portlanders that want to join me sometime, let me know! Let’s sweat!

QUESTION: What’s the best workout you’ve ever had? And if you’re in the Portland area do you want to try the StrengthFit Gym?

22 thoughts on “My Ass-Kicking”