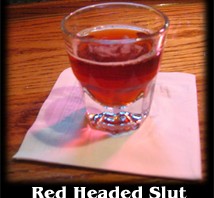 And sometimes you just need a Red Headed Slut.

Thursday in Portland was absolutely gorgeous–sunny and warm, the wind rustling the green trees, the sky was blue and neither Michael nor I really wanted to sit at home inside. I suggested we make dinner and take it to a park nearby for a picnic. That seemed like more work than Michael was up for after a long week. The runner up option was a long walk (almost 2 miles around the track next to our house) and then out to dinner.

The debate on where to go to dinner is an endless one in our house.

Like seriously. We both sat at the computer scanning Yelp.com trying to narrow down the search, looking at obnoxious PDF files of restaurant menus and not being able to agree on anything. We finally agreed on The Slow Bar. It’s a total dive bar that I’ve only been to once. Michael took me out to celebrate my new job (2 years ago now?) and we ended up bar hopping in celebration. One of the stops was to the Slow Bar for a Red Headed Slut. I’m not normally a shot kinda girl…I could occasionally do a shot of vodka or Goldschlagger. But I’d much rather have it in a drink. That night Michael was ordering me Red Headed Sluts by the handful. Oooof. 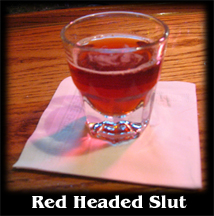 You know you want one! So what is a Red Headed Slut? 1 oz peach schnapps, 1 oz Jagermeister® herbal liqueur and cranberry juice. Sounds HORRIFYING doesn’t it? It really didn’t taste that bad. I don’t remember a lot from that night, other than the fact that we stopped into a groovy little hole-in-the-wall called The Slow Bar. 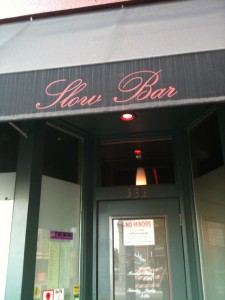 Last night I did not partake in the famed drink but instead I got something else I was craving: lemonade. 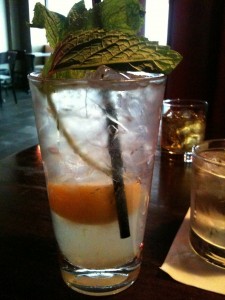 I’d been craving lemonade all day long and finally gave in. This lemonade was special though, it came with Skyy Vodka, club soda and mint. It was delicious and refreshing. It was time to order dinner. The burger was calling to me–even though it would be the second one I’d had this week. I mean really, how can you resist something like this? Natural Beef with Gruyere cheese, onion rings ON THE BURGER, butter lettuce, garlic aioli sauce and pickle relish. 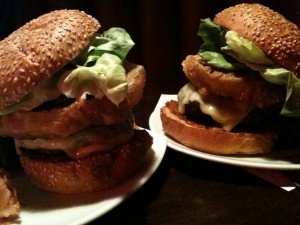 Look at that burger! When it arrived I gasped in horror. Michael’s eyes got humongous with glee. As you can see we got matching dinners. I ate one of the onion rings that arrived on my burger but left the other one on top of the burger to get the whole experience. Thankfully my burger arrived with a salad instead of the fries. The salad had a very light, dry dressing that was subtle but flavorful at the same time. There was a citrus tartness to it but it wasn’t overpowering. I also liked that the lettuce wasn’t drenched in the dressing. It came with seasoned and spicy nuts (almonds, walnuts, hazelnuts and peanuts). The nuts were the real treat of the salad. The flavor blended perfectly. 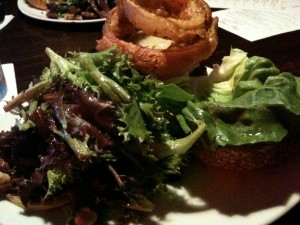 Now for the burger…the burger was a little difficult to eat because it was so big but I just mashed it all together to flatten the bun and onion ring. The onion ring gave each bite an extra special crunch but without it detracting from the juiciness of the burger. The Gruyere really made this special. It’s a mild, nutty cheese that has a sweet aftertaste without being too sweet. It’s basically a Swiss Cheese I think but milder. Michael uses Gruyere in his famous Mac n’ Cheese. The nutty cheese went so well with the smoky burger and crunchy onion ring. 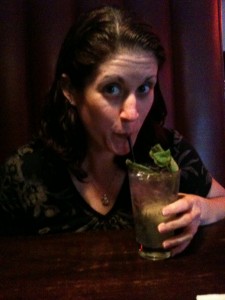 The burger was small–despite the height in the photograph but it was definitely a gut bomb. I felt stuffed after eating it but not uncomfortably so. Michael and I debated who had the better burger: Slow Bar or Foster Burger? 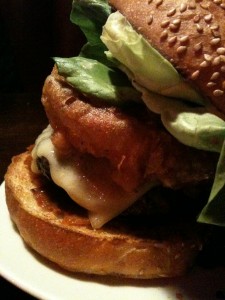 We are divided on the issue. I think the burger last night was truly fantastic and I would definitely go back to that little dive bar to enjoy it again (with a Red Headed Slut to wash it down). Michael immediately started planning the next excursion out and read reviews of a new restaurant that boasts “it’s so godly that I think it deserves to be obsessed over.” Intriguing…will there be a burger war soon? I’m willing to be the guinea pig to discover the BEST BURGER IN PORTLAND. 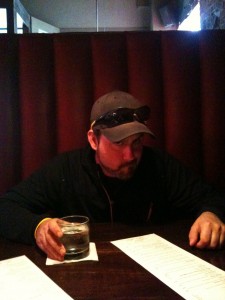 Happy, full and trying not to give in to post-restaurant calorie guilt, we headed home about 8pm and it was still light out. I love long summer nights! I’ve decided that the hardest part about living a healthy lifestyle for me is the temptation of RESTAURANT FOOD. Really that is what is keeping me from weighing about 10 pounds less. It’s hard in a city like Portland with so many delicious restaurants to try and not enough calories in the day to do so!

QUESTION: Describe the best burger you ever had. GO! And Portlanders: where do you weigh in on the “Best Burger in Portland”?