I didn’t stay up too late at the campfire on Saturday night so it wasn’t too bad when I woke up Sunday morning. I was going to go for a run with my cousin Rachelle. She’s new to running, doing a few 5k races and I think a 10k. She’s currently training for her first half marathon. It will benefit Veterans in need of prosthetics. 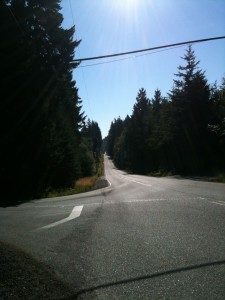 It was about 9 am when we set out on the street. The temperature was already pretty warm out. The sun was bright and it was a quiet morning. We saw a few other runners on the road but for the most part we were alone on the streets. The lonely country road had rolling hills. 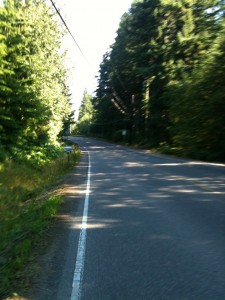 The hard part about running with a partner is the tendency to run faster. Even if both people are pretty evenly matched in pacing, for some reason it’s natural to run faster than normal. Rachelle and I had a pretty quick pace as we ran down the road. 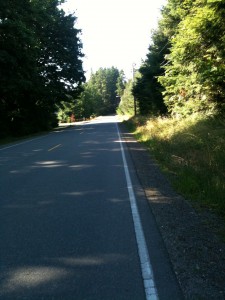 There wasn’t a bike lane or much of a shoulder for us to run on but the road was so remote traffic wasn’t really an issue. Rachelle ran on the edge of the road and I stuck to the sandy/dirt path next to the road. 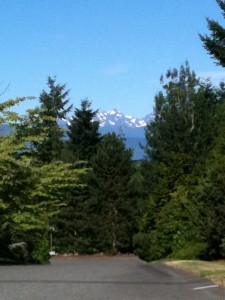 We could see the Cascades peaking over the trees and it was a clear, gorgeous morning. It was such a scenic run! I love running in new places. That’s the best part about running on vacation. We ran the route that Rachelle and my cousin Kristin often do. Lots and lots of hills. I was feeling okay though. I worried about my body (would my calf start to hurt? was my ankle okay? would my knee flare up?) but it held up great. 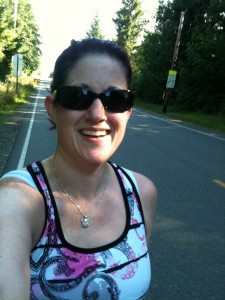 We ran passed a farm house to a school before we turned around. 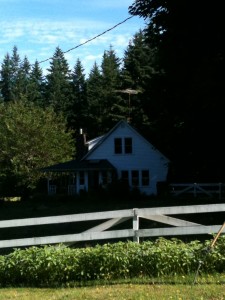 We took a quick walking break up a big hill on the way back. We caught our breath and then started running again. The hills heading back to the house were rolling but short enough that we could do them without issue. 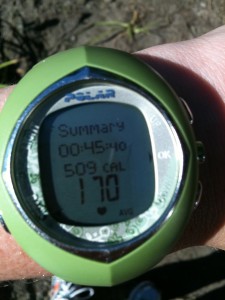 It felt sooo good to run! We got back to the house and Michael had already packed up our tent, which was sweet of him. I got cleaned up and then grabbed breakfast. A spoonful of scrambled eggs and 1 biscuit with gravy. 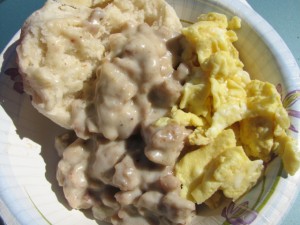 The breakfast hit the spot after the run. We relaxed a bit by the campfire. 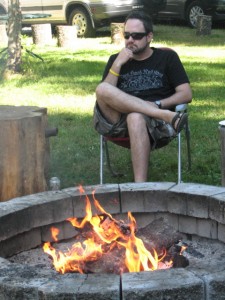 There was enough time to catch up with the family before we had to get ready to leave. 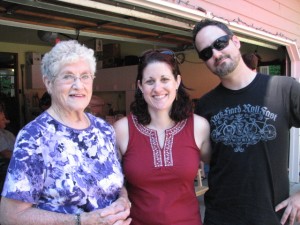 My grandma is going to be 90 years old this year! She’s doing great and we got some pictures with Grandma before leaving. 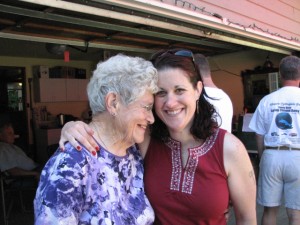 We had kind of a long day ahead of us so we said our goodbyes and hit the road. 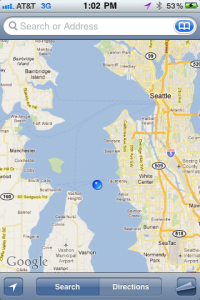 We had to catch a ferry to West Seattle to meet some friends before heading back to Portland!

QUESTION: Do you look forward to running or biking when you go out of town? How do you run with a buddy?