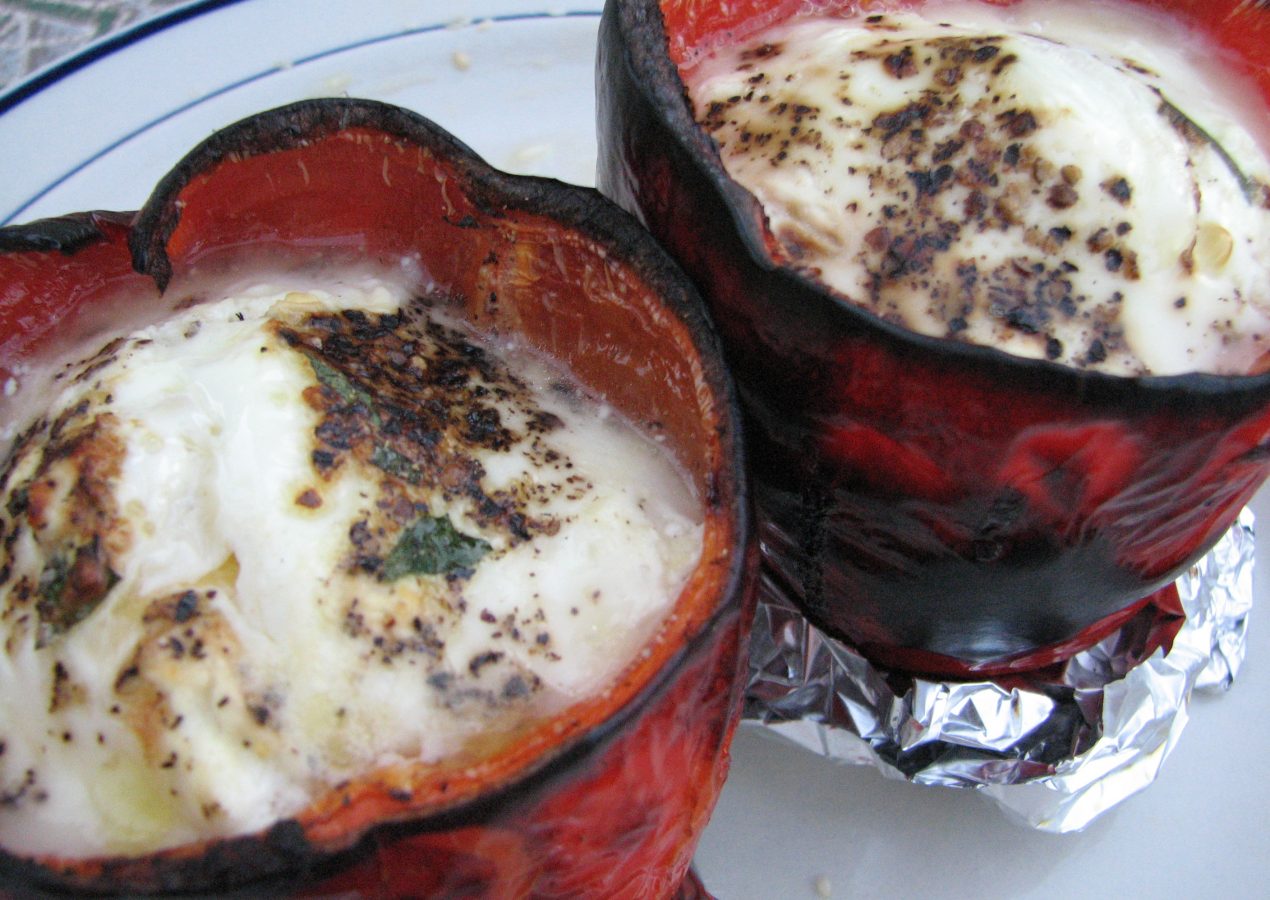 Saturday afternoon I went to a friend’s house for some cooking! When I got there was making blackberry jam from berries picked from her garden. I’ve never done any canning or made jam before. It was so fun to see how it works!

It was hot and messy but fun to make something like this. The berries smelled delightful. Do you want to know how much sugar goes into jam?

7 cups of sugar!! Holy moly! I wondered if we could add a Splenda blend to cut down some of the sugar but the package said NOT to use sugar substitutes or it would not set properly. I’m sure there are some ways to make jam with less sugar but that’s not what we did.

I can’t wait to try the jam!

After making jam, I prepped the stuff for dinner. We made Leah’s peppers and eggs for dinner! The moment I saw her post about it, I wanted to make it. It wasn’t something Michael would eat, though, so I saved it for an occasion where I could make it myself.

Coat the outside of the peppers with olive oil to prevent sticking on the grill. Crack eggs in the peppers and top with salt and pepper. Heat grill on high. Place peppers on grill and close. Let cook for 20-25 minutes or until egg whites are cooked through.

It was such a nice evening out, we took everything outside to fix. It was a hot night with a nice, cool breeze. The peppers I got had some trouble standing upright so I created little foil bases for them to sit on in the grill.

Kat also added two corn on the cob husks to the grill to make a Roasted Corn Salsa.  Kat made the salsa while we waited for the peppers to cook.

As a side dish, Evan’s Japanese Sesame Cucumber Salad. I’ve had this salad in sushi restaurants before and loved it. So I knew this would be yummy.

It’s also a great recipe to make in the dog days of summer. When it’s super hot out, who wants to stand in front of a stove?

We both agreed it was good but seaweed would have been a nice addition. We enjoyed a nice bottle of chardonnay while we sat outside munching.

Then the peppers were done!

They were good! And such an EASY meal to make. We both agreed that it needed more seasoning of some sort. I’m not sure what kind of herbs or seasoning it needed, but something. I felt like it was a breakfast meal more than dinner. So I suggested next time adding chopping ham or bacon to the raw eggs and then grilling them. Or adding some cheese to the stop of it?

I think this recipe is also Evan’s recipe and I believe he’s a vegetarian, so maybe that’s why the recipe didn’t have any meat in it. I think a smokey, salty ham would be a nice addition to this yummy meal. It was easy to eat too.

I’m happy that all the recipes were a success. It was a really nice night!

QUESTION: What spices/seasons would you add to the egg dish? Do you have a favorite stuffed pepper recipe to share?

How To Brine a Steak